I Say Potato, You Say Putin-oh! | The Risk of Speaking a Little Russian When That’s About all You Know

Our super-senior correspondent (and senior editor) recalls that time in St. Petersburg when a little local knowledge could be a dangerous thing.

After studying French for five years and still struggling with Frère Jacques, it’s safe to say that I will never be described as a polyglot. Despite that linguistic failing, I do however always attempt to pick up at least a few words or phrases whenever I travel.

Learning a bit of the local lingo is not only polite, but it also immediately distances you from those whose best attempts at conversing when overseas involves speaking their own language more loudly. In addition, it enables you to better interact, can help when buying food in a local market, while trying to get directions or if found in a sticky situation.

However, giving the impression that you speak a language when you don’t is not necessarily always as good as you might think. As the English poet Alexander Pope sagely wrote in 1709, sometimes “…a little learning is a dangerous thing.”

I believe I’ve succeeded with my language goal everywhere I’ve been, with one exception: Iceland. It’s not that I didn’t try to master Icelandic during my visit, but rather that all the Icelanders I met spoke better English than I do. Furthermore, as I struggled upon arrival just to pronounce the location of my hostel—Hafnarfjörður—never mind the Eyjafjallajökull volcano, I figured there wasn’t much point in even trying a whole sentence.

The Russian language is one that has always fascinated me. Everything sounds so rich and dramatic and best pronounced with a deep baritone voice accompanied by a stirring rendition of the old Soviet anthem. Just to add to its exoticness, the Cyrillic alphabet is a hieroglyphic maze of upside-down and back-to-front letters, upper-and-lower cases intertwined and even characters that look like six-legged spiders—to my monolingual vivid imagination, at least. 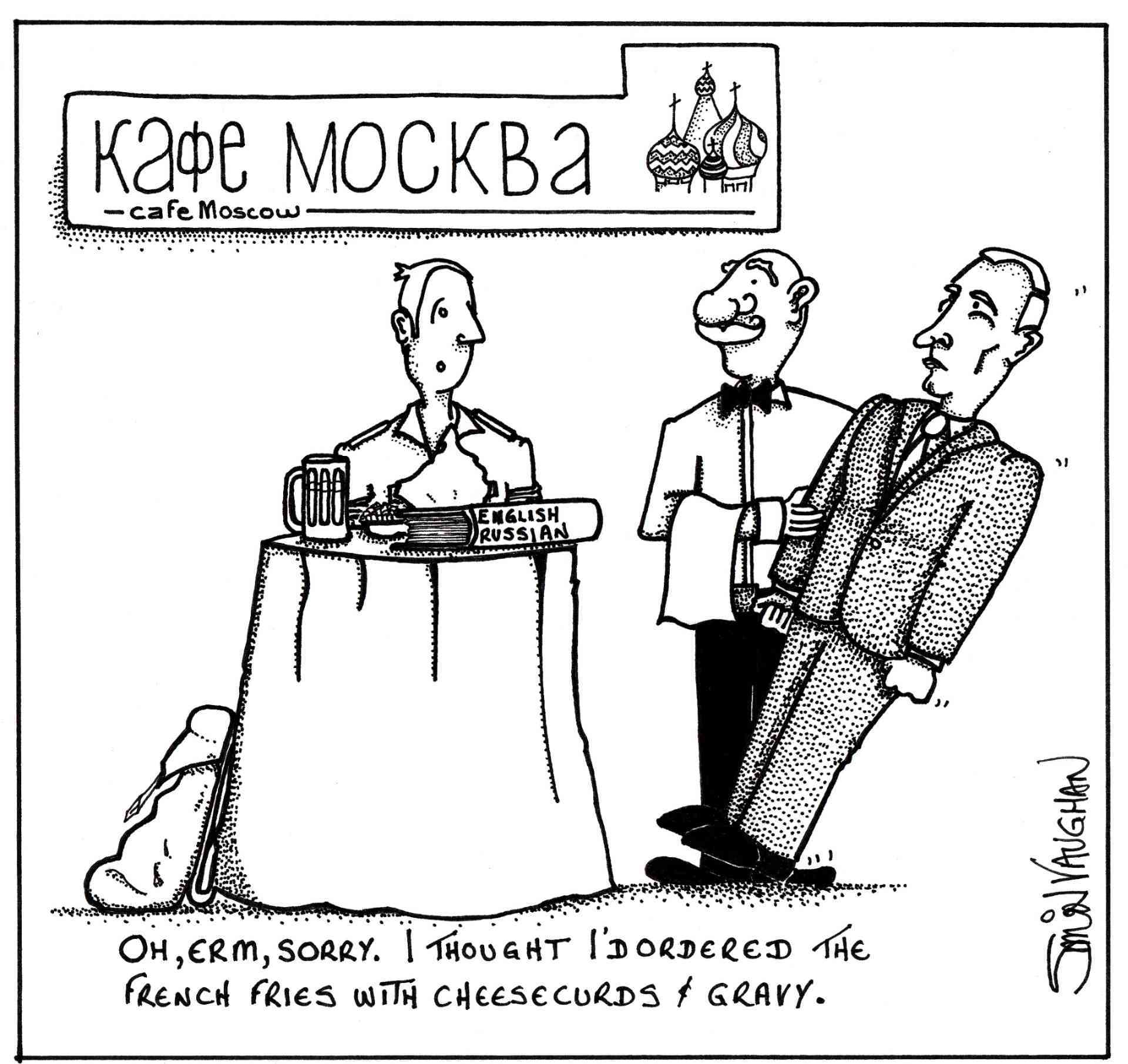 It is Putin or Poutine?

Although I was only going to be in St. Petersburg for a couple of days, I studied the Cyrillic alphabet before leaving home, as much for fun as for usefulness. I learned half a dozen words and a few phrases, and when I boarded my Russian ship in Helsinki for the voyage to the former Russian imperial capital, I felt confident of not mere survival, but unabashed success! 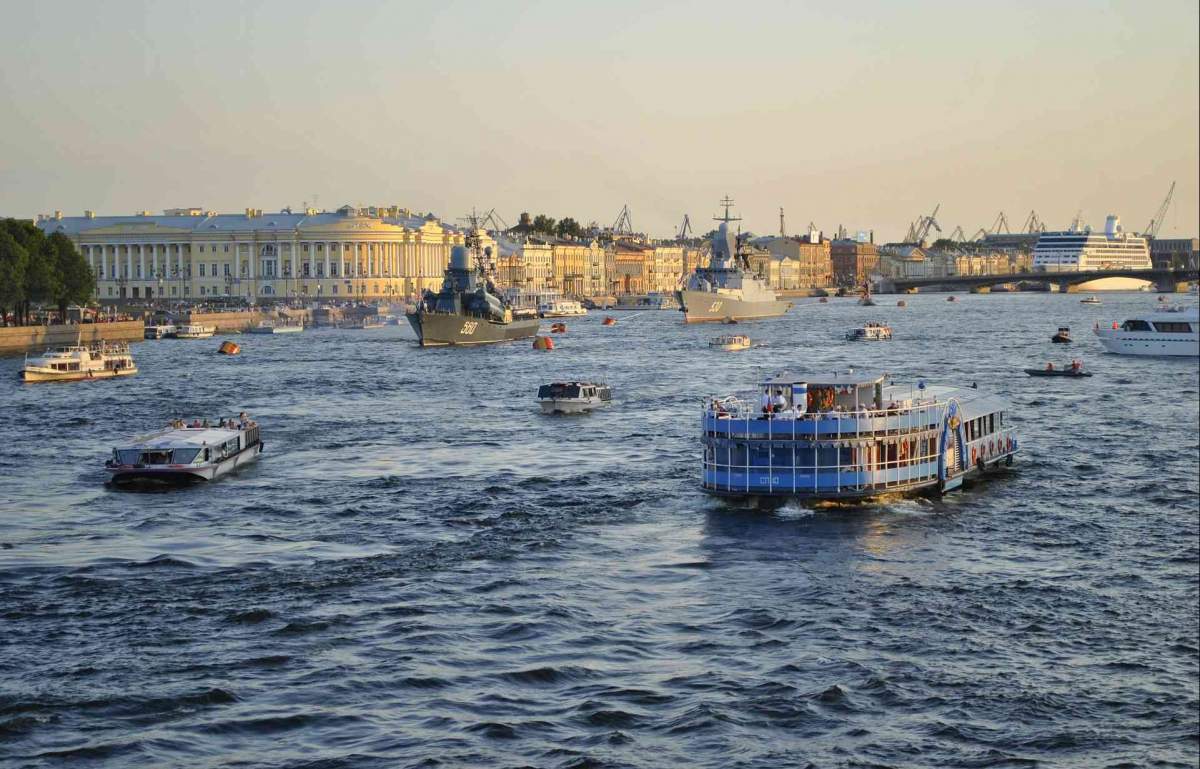 My trip came just a few years after the fall of the Berlin Wall. Boris Yeltsin was Russian president, the country had dropped the title of the Union of Soviet Socialist Republics (USSR), and as the stamp in my passport later attested was now the Commonwealth of Independent States.

The detour from Finland had come about almost by accident when I had haphazardly discovered it was possible to sail from Helsinki on a three-day trip. Best of all, as long as I stayed on board the ship between 1 a.m. and 7 a.m. each night while docked in St. Petersburg, I could enter Russia without a complicated and costly visa. It was one of those loopholes that seemed almost too good to be true.

Tourism in Russia was still struggling to evolve from its stifling communist past at the time, and customer service and a solid tourism infrastructure were still not quite there. There were really no Western fast food chains, no souvenir shops, and luxury international hotels were only just beginning to bloom.

The services and facilities on board my Russian ship could best be described as the nautical equivalent of rustic, like the single, small cube of red Jello that comprised dessert and the shot of vodka for $1 in lieu of wine!

At the time I had a friend who lived in St. Petersburg and when I told her of my last-minute 48-hour visit to her city, Lena immediately agreed to meet me at the port.

The soft light of morning illuminated St. Petersburg’s docklands as our small ship weaved its way past the long shadows of rusting leviathans and enormous sea-going hulks. Small fires burned on spits of land, and seagulls squawked overhead. Putting my newly-learned Cyrillic to the test, I stood on deck and began reading the names of the passing ships: Lenin and Gorky, Zhukov and Brezhnev, and even a small flotilla of tracking ships named after Soviet cosmonauts.

We disembarked into an enormous Soviet-era terminal building that still bore the title “Leningrad” despite the city’s name having been changed back to its original “St. Petersburg” several years earlier. The grand hall seemed abandoned, with scaffolding and just a few customs booths open, and every sound echoing loudly off the empty walls.

As my passport was scrutinized, I gazed around and continued with my self-taught Cyrillic lessons, quietly mouthing all the signs to myself. Document stamped, I joined my fellow passengers wandering through the building until I arrived at the entrance and was met by Lena.

I spent the day being given the sort of tour that only a local can provide. Lena took me to the Hermitage and Nevsky Prospekt, Kazan Cathedral and the Bronze Horseman. She pointed out the KGB headquarters and took me shopping for a picnic lunch in a local park.

Come the evening, we headed through an archway into an unmarked outdoor courtyard bar where young Russians sat drinking beer, laughing, chatting and singing songs. Just before 1 a.m., we bid farewell outside her high-ceilinged flat as Lena flagged down a cab, negotiated a fare with the driver and sent me on my way.

“Tomorrow morning we’ll meet here at 8 a.m.,” she said, pointing to her building. “You probably won’t be able to find a cab in the docks that early, so just flag down any car that will stop for you. Anyone will give you a ride, just don’t get in an expensive new car as it’s probably mafiya.”

“And don’t get in any car with more than one person already in it,” she added. “They might kill you. OK?”

That night I slept well, several decks below sea level. Early the next morning, before anyone else on the ship had stirred, I bounded down the gangway and back into the terminal building. The lone, sleepy officer stamped my passport again, and I headed for the exit.

The only problem was, I couldn’t find it. I was completely lost in the enormous void, my faltering footsteps the only eerie sound. Apart from the one customs officer in her booth there was not another living soul around.

I decided to return to ask her for directions, but couldn’t even find her booth. I had visions of being stranded forever in the old Leningrad Terminal, like one of those long-bearded soldiers who spends decades wandering the jungle unaware that the war has long ended.

Suddenly I remembered from my previous morning’s Cyrillic lessons that “выход” was Russian for “exit.” I searched for a sign, found one and followed it until I emerged into warm Baltic sunshine.

As Lena had predicted, there were no taxis in sight and like docklands all over the world, the area was a little less than salubrious. I started walking swiftly towards the city centre, frequently glancing over my shoulder for as unattractive a car as possible. A troop of Russian Navy sailors jogged by in formation while a feral-looking cat streaked across my path.

I walked past dilapidated buildings, crumbling with neglect and overgrown with weeds and grass, all the while still longing for a lift. Finally, a suitably battered Lada came into sight driven by a suitably old driver who sat, suitably, alone. I waved my arm and he stopped. I leaned in through the open window.

Clearly my pronunciation was flawless, for the driver let rip with a long and dour dissertation in high-speed Russian. I apologetically stammered in response that I couldn’t speak Russian, thanked him, and backed away from the vehicle already looking for a new ride.

But it was too late. From within the car came another tirade and the unmistakable thump of fist on steering wheel. Then, he leaned across the front seat and opened the door. I hesitantly got in and we set off into the rush-hour traffic.

There are few things more uncomfortable than awkward silence. Awkward, one-sided, unintelligible conversation is one of them. My companion, having found the perfect conversationalist, vented nonstop for the next 15 minutes. He tapped the fuel gauge, waved his arm around furiously, jabbed venomously at the world outside and just generally had what I could only perceive to be a good old-fashioned rant.

I sat and nodded quietly and politely, longing for the trip to end. Finally we arrived at Petropavlovskaya just past 7:30 a.m. after what felt like the longest drive of my life. I reached into my pocket and handed my new best friend a few thousand rubles—the equivalent of about $5 at the time. I had no idea whether that was good or not, and sat with bated breath awaiting his response.

He took the money in his large, weathered hands and stared at it. My heart stopped. Had I insulted him? Had he expected considerably more? His gaze turned from the money to me, and then back to the money. He stared at me for what seemed an eternity before bursting into an enormous smile, his gold-capped teeth glinting in the sunlight.

He slapped me on the shoulder and loquaciously expressed his clear delight. Then, reaching down beneath his seat, he produced a half-empty bottle of unnervingly-cloudy liquid. He raised it up and undid the top. “Wodka?” he asked, proffering me the murky bottle.

My driver shrugged, smiled, and took a swig, waving cheerily and continuing a long line of conversation as I disappeared into the crowds and ran off towards Lena’s apartment. ♦