I So Love Your Altitude! The Atacama Desert: Is this the Driest Place on Earth?

In Chile’s spectacular Atacama Desert everything is high, even the bottom of the deepest canyon.

“Are you feeling OK?” Macarena asked, turning around from the front seat.

“We’re at 3,400 metres now,” she added, glancing at the altimeter on her wristwatch. “That’s pretty high, when you’ve only just arrived.”

Outside the van swept the spectacular vista of the Atacama Desert in northern Chile, the driest-highest-coldest desert on Earth. The highway reached the peak of a rolling rise and before us spread the vast Atacama salt pan against a backdrop of jagged conical mountains. It was a lunar landscape with sky-high altitude.

Just shy of the town of San Pedro de Atacama, we turned down a winding dirt track towards a narrow canyon.

“That’s the Pukará de Quitor,” Macarena said, pointing upwards at a ragged stone terrace. “The fortress was built by the Atacameño people over 700 years ago. You can borrow a mountain bike and cycle here from the lodge to explore it if you like.”

The Alto Atacama Desert Lodge was almost invisible, with its low roofs and earthy tones blending perfectly into the valley. Surrounded by unpretentious landscaped grounds and an air of genteel serenity, it was as though the lodge had sprouted up from the arid ground rather than been man-made. Beside the lobby, Johana beckoned me to a small desk and presented a long list of included activities, from hiking and biking to mountain climbing and stargazing. 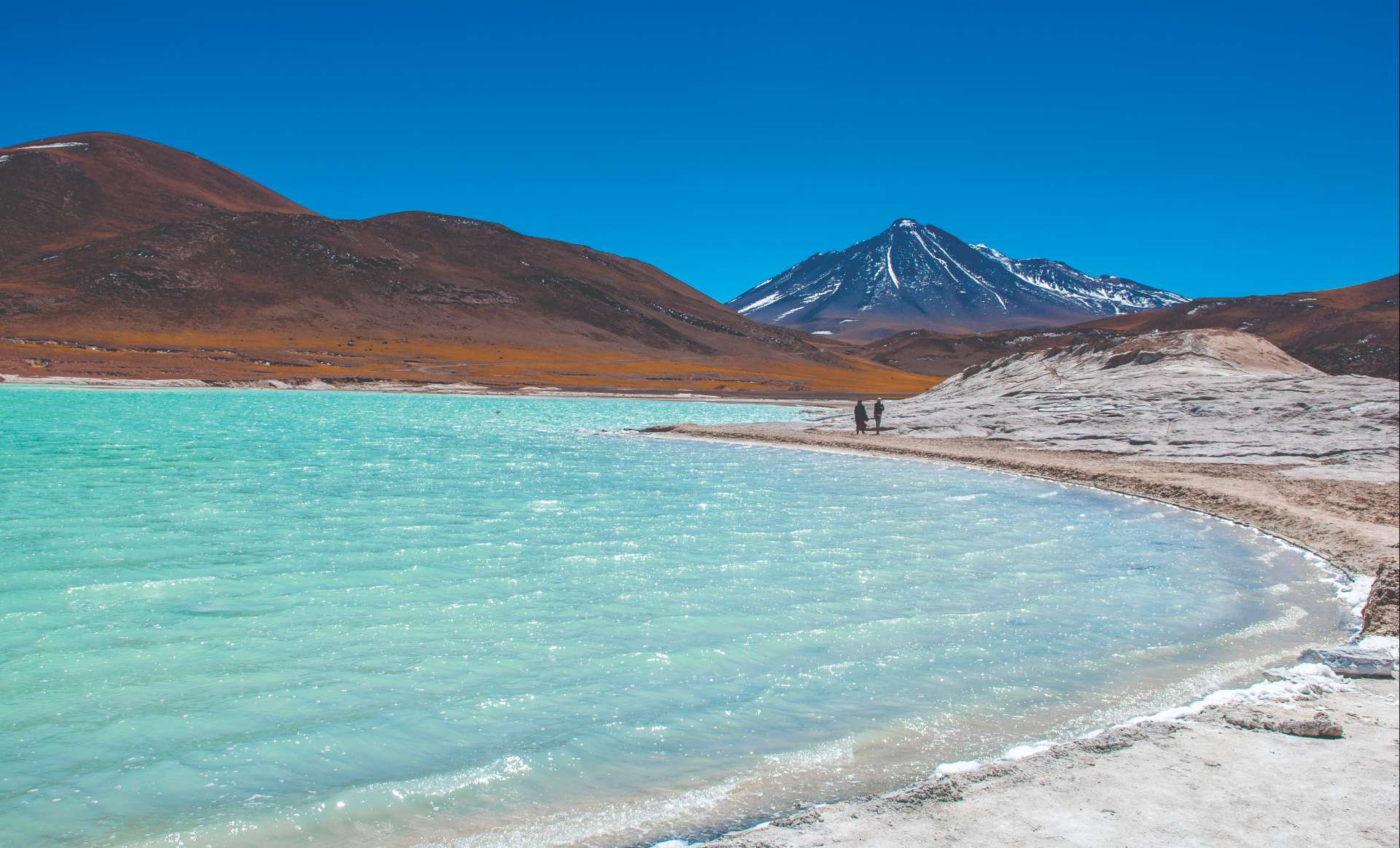 The high Andes lagoon of Miscanti, with Miniques volcano in background

“We’ll start you slowly,” she explained. “It will likely take you two to three days to get used to the altitude. Then we can take you up even higher, over 4,000 meters, to the high lakes and geysers. We’ll begin with a few shorter hikes though.”

My only previous experience with altitude had been trekking for gorillas in the Virunga Mountains of East Africa. I’d had no problems then, but I was now considerably higher and had arrived straight from sea level instead of building up slowly to the higher elevation.

“How common is altitude sickness here?” I asked. 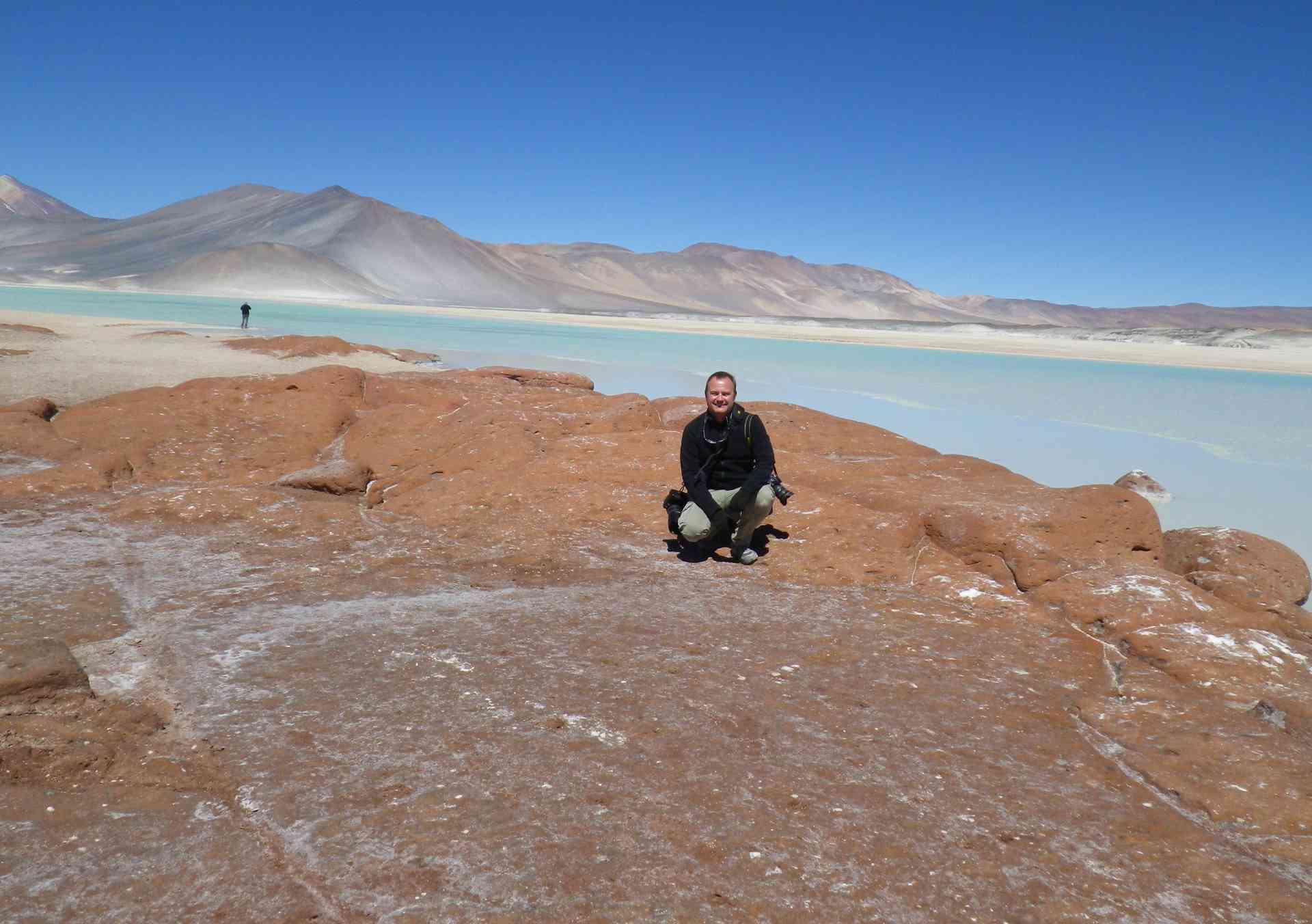 The author awestruck by the Atacama’s beauty.

“It depends on the individual,” Johana replied. “Some people feel nothing at all, even over 4,500 meters. Others feel it the moment they arrive at the lodge, which at [more than] 2,400 meters is the same height as Machu Picchu. It’s got little to do with fitness or age. We’ve had people who’ve trekked in the Himalayas and they’ve had a problem walking to their rooms, while others have never been above sea level before and they’ve been fine. Drink lots of liquids, take it slowly and you should be OK. If you have any problems, we have coca tea. That usually helps.”

After dinner I sat by a crackling fire on the patio. Overhead a billion stars twinkled, serenaded by complete, total and utter silence. The next morning I awoke to brilliant blue skies and bright red canyon walls.

After filling my water bottle, I boarded a minivan to Los Cardones Ravine, which is located in Los Cardones National Park, for my first hike.

“Some of these cacti are hundreds of years old,” explained our guide Joel, as we trekked past the towering spiky shrubs and down into the canyon, the beautiful scent of rica-rica shrubs filling our nostrils. Lizards scampered into tall swaying grasses, and as the sun rose higher the temperature began to soar. We stuck as closely to the shade as possible as we rock-hopped deeper into the ravine, sidestepping a raging torrent of water that came from the snowcapped Andes.

“We’re at 3,100 metres now. How are you feeling?” Joel asked Jay and Ignacio, two travellers from Los Angeles who had reached the Atacama on this trip by way of Easter Island and Machu Picchu. 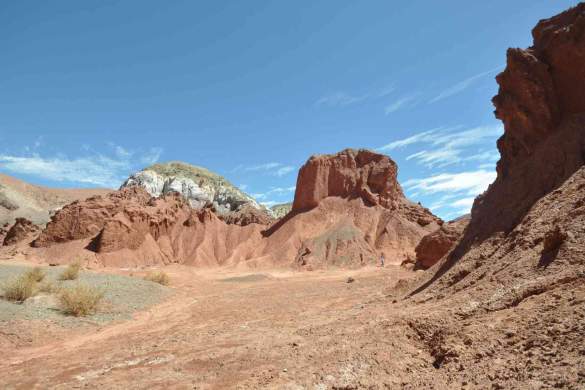 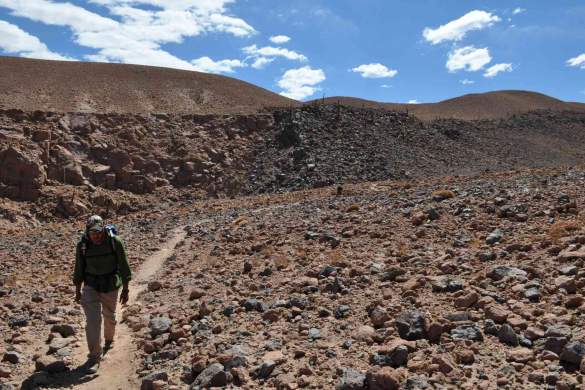 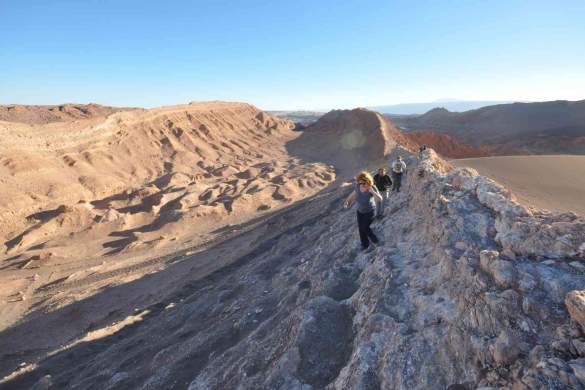 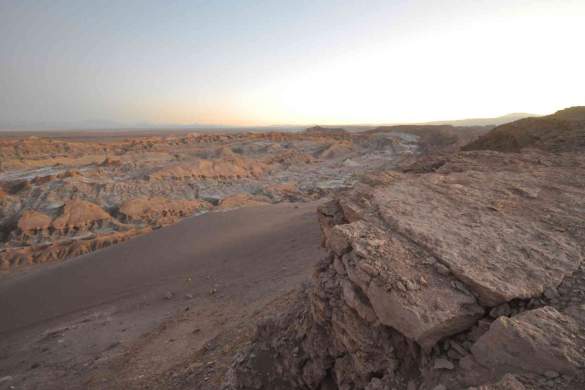 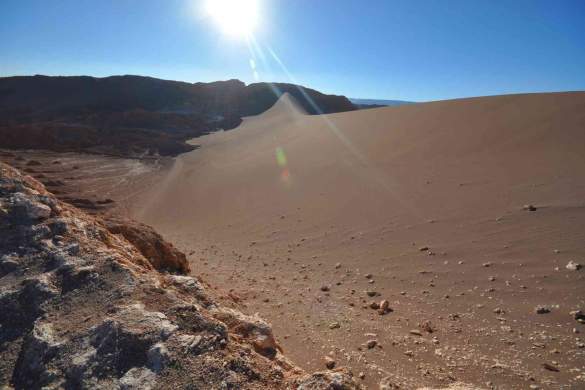 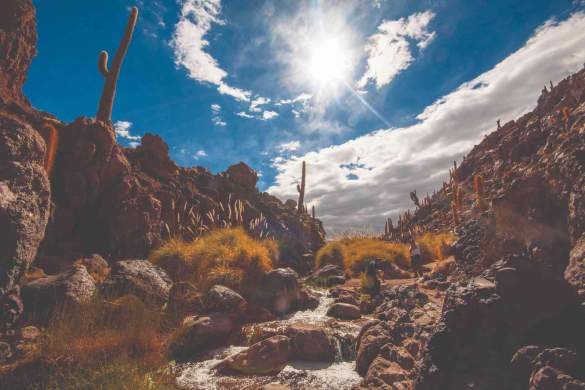 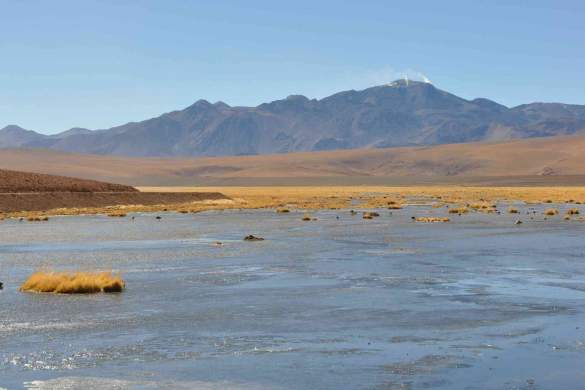 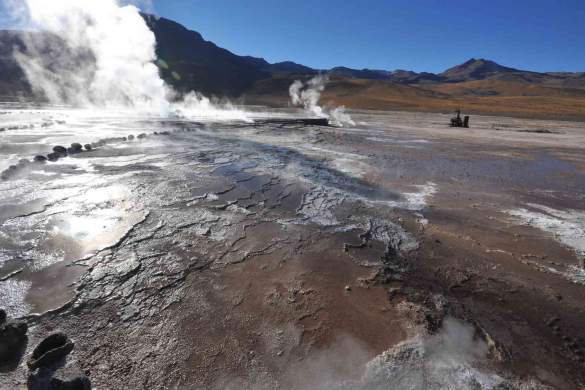 “Make sure you drink lots of water. The altitude, dry air and sun can be quite dangerous.”

In the shadowed depths of a narrow crevasse with encroaching cliffs obscuring everything except a thin slice of blue sky, I felt as though I was at the bottom of the world. After several hours of trekking we began a steep ascent several hundred metres out of the canyon. As I reached the surrounding altiplano, I noticed that I was curiously short of breath. Although nothing dramatic, it was a reminder that everything in the Atacama is high, even the bottom of a deep canyon.

Late that afternoon we headed for the Chaxa Lagoon in Reserva Nacional Los Flamencos. Hundreds of flamingos elegantly strode across the lagoon, their submerged beaks filtering mouthfuls of brine shrimp while smaller wading birds raced around grabbing their own share. As the sun began to dip and the gentle whoosh of low-flying flamingos became the only challenge to the silence, the lagoon and distant Andes changed colour—from blues to yellows, oranges to pinks, reds to deep purples. 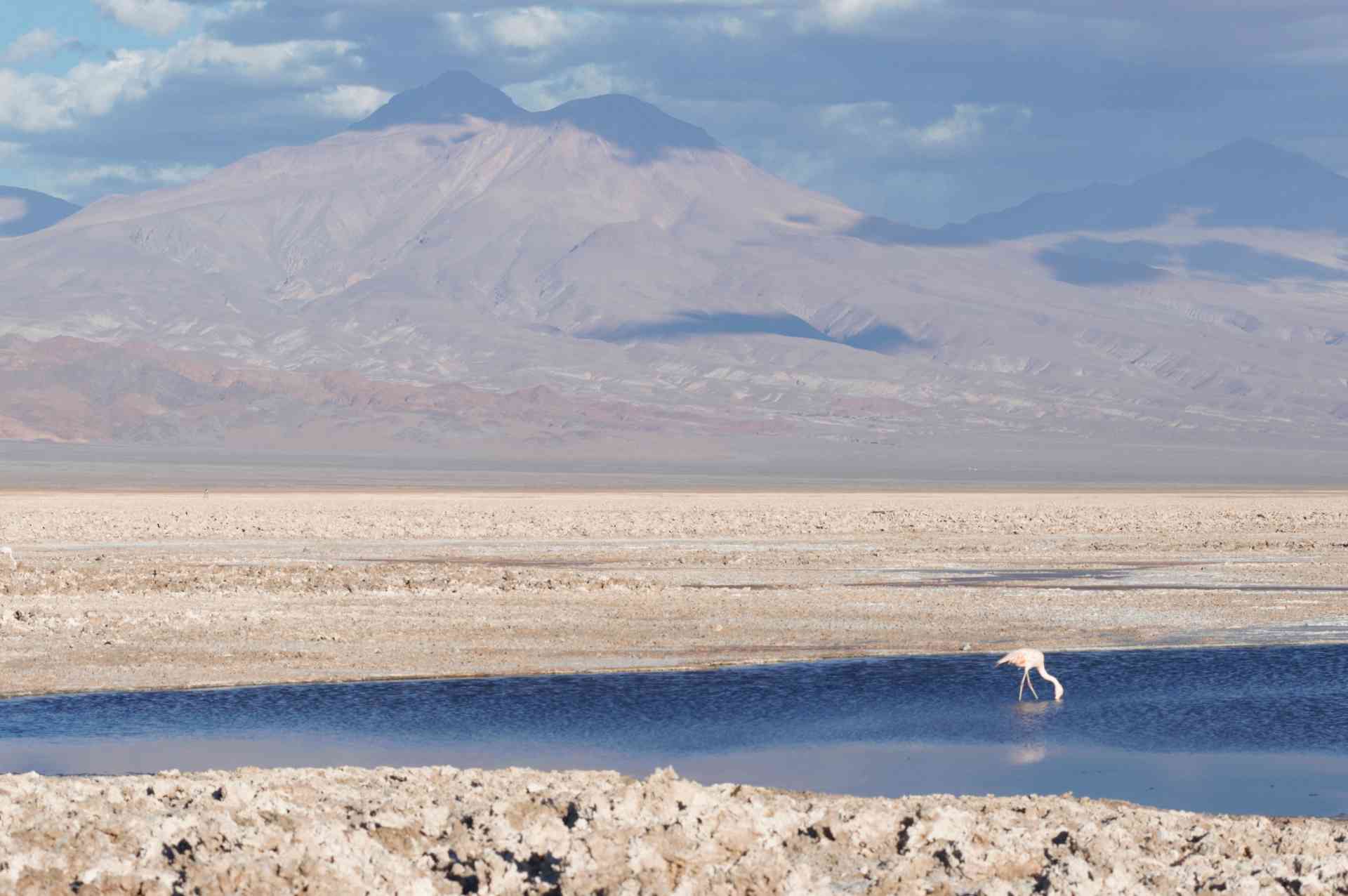 Chaxa Lagoon in Reserva Nacional Los Flamencos: so this is where flamingos hang out!

“That perfect cone is Licancabur,” Joel said, gesturing to a triangular peak. “It’s a 6,000 metre volcano where the Inca performed sacrifices. Inside the caldera is a lake that was first explored a few years ago, possibly the highest scuba dive ever. Someone found a perfect crystal ball but as they sat examining it, the glass magnified the sun’s rays and it burned the diver’s hand. He dropped it into the lake and no one has found it again. Come on, we’ll catch the rest of the sunset overlooking the Valle de la Luna.”

As we stood on a rise watching darkness slowly engulf the sprawling ridges and canyons that comprised the otherworldly Valle de la Luna below, I asked if there were many stories in the Atacama like the crystal ball. 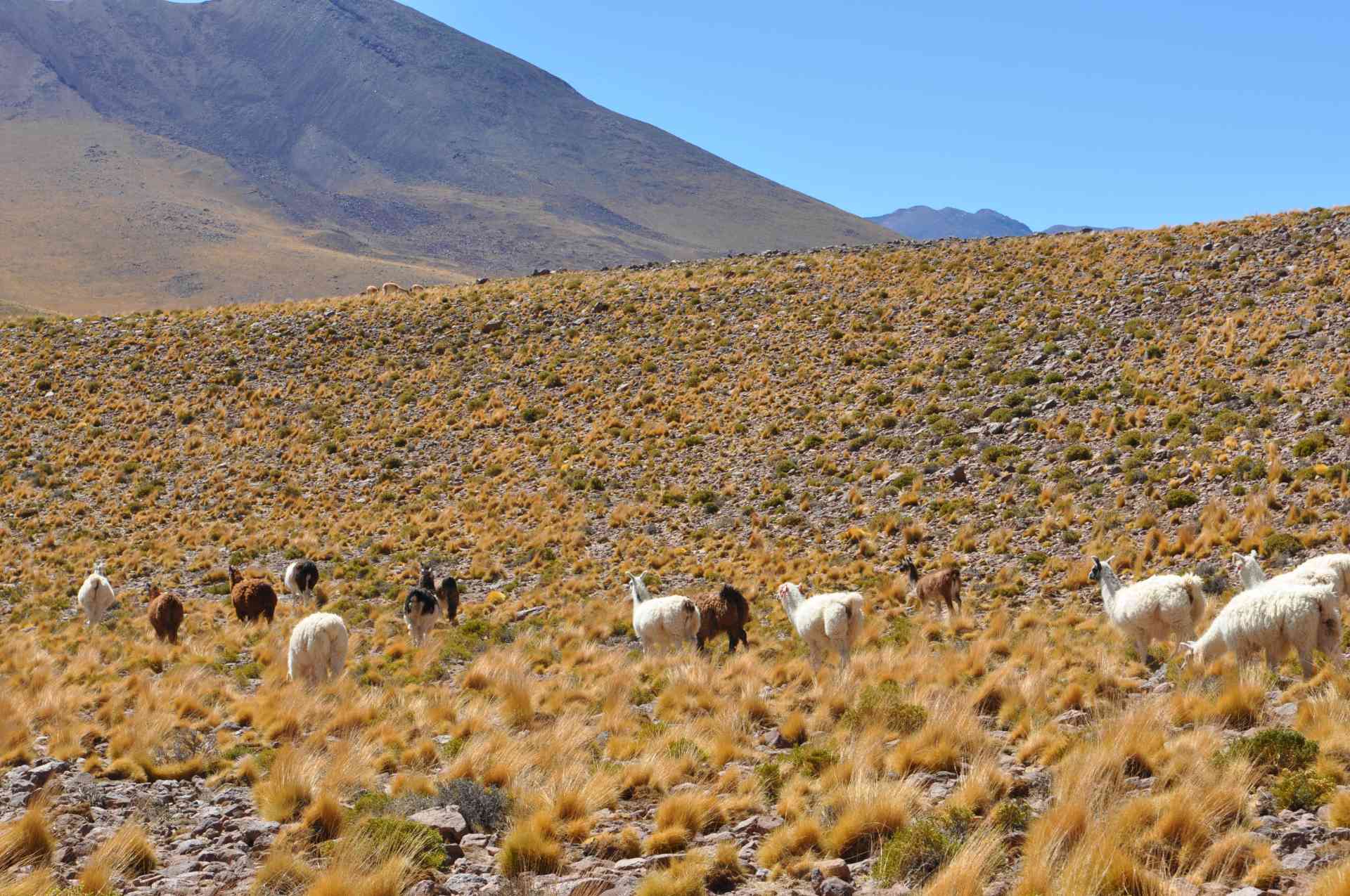 “I saw more vicuña, guanaco and herds of llamas with identifying tufts of coloured wool on their ears like humane cattle brands.”

“Oh yes, lots. This is a very mystical place, look over there.” Joel pointed to a soft glow on a dark, distant mountain slope. “That’s the entrance to the Atacama Large Millimeter Array observatory, or ALMA, one of the most important astronomical observatories in the world. From a secure site even higher in the mountains, radio telescopes are used to scour the night sky. There are some who say that UFOs land there, too.”

“Do you believe that?” I asked.

“No, no. But there are lots of stories of strange lights descending into Licancabur, hovering or flying in formation. Even ones of air force jets disappearing and the pilots reappearing looking much older. Lots of strange things. Even claims of the chupacabra.” 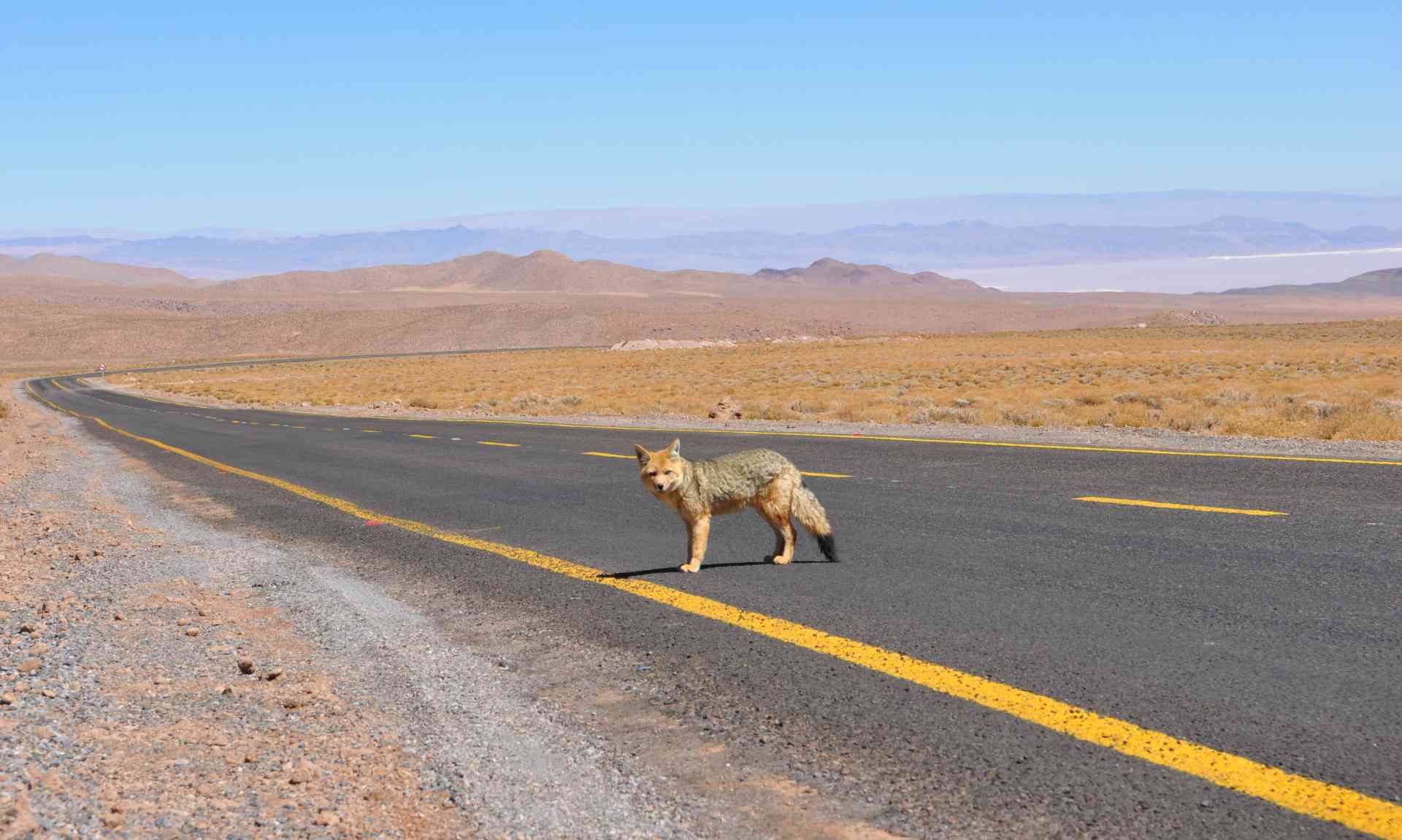 Is it half-dog or half-vampire?

I climbed back into the van and slammed the door shut quickly before Latin America’s infamous half-dog, half-vampire beast got me. The next day I headed higher into the Andes. We began by crossing the Tropic of Capricorn on an ancient Inca Trail. The route was marked by apacheta, small rock piles that like Inukshuks were used to mark routes and share information. We stopped in the cobblestoned town of Toconao, whose buildings, unlike the adobe structures of San Pedro, were built from volcanic stone. Passing terraces of quinoa and dodging an Andean fox relaxing on the warm road, we arrived at a high lake.

The blue and green hues of the water contrasted against the pristine white-salt shoreline every bit as spectacularly as the deep colours of the previous evening’s sunset, and as if on cue, a few vicuña—the wild version of the domesticated alpaca—trotted past.

“See that grass?” our guide Mattias, asked. “That only grows above 4,000 metres. So even without an altimeter you’d know we’re at least that high. We’re actually at about 4,200 metres, and it’s only at this altitude that you might see pumas, so keep your eyes open.”

After a hike around the lake, we had lunch in the lee of the van, as brisk winds howled through us. There was an impressive spread of salads and cheeses, cold cuts, cakes and of course, Chilean wine. 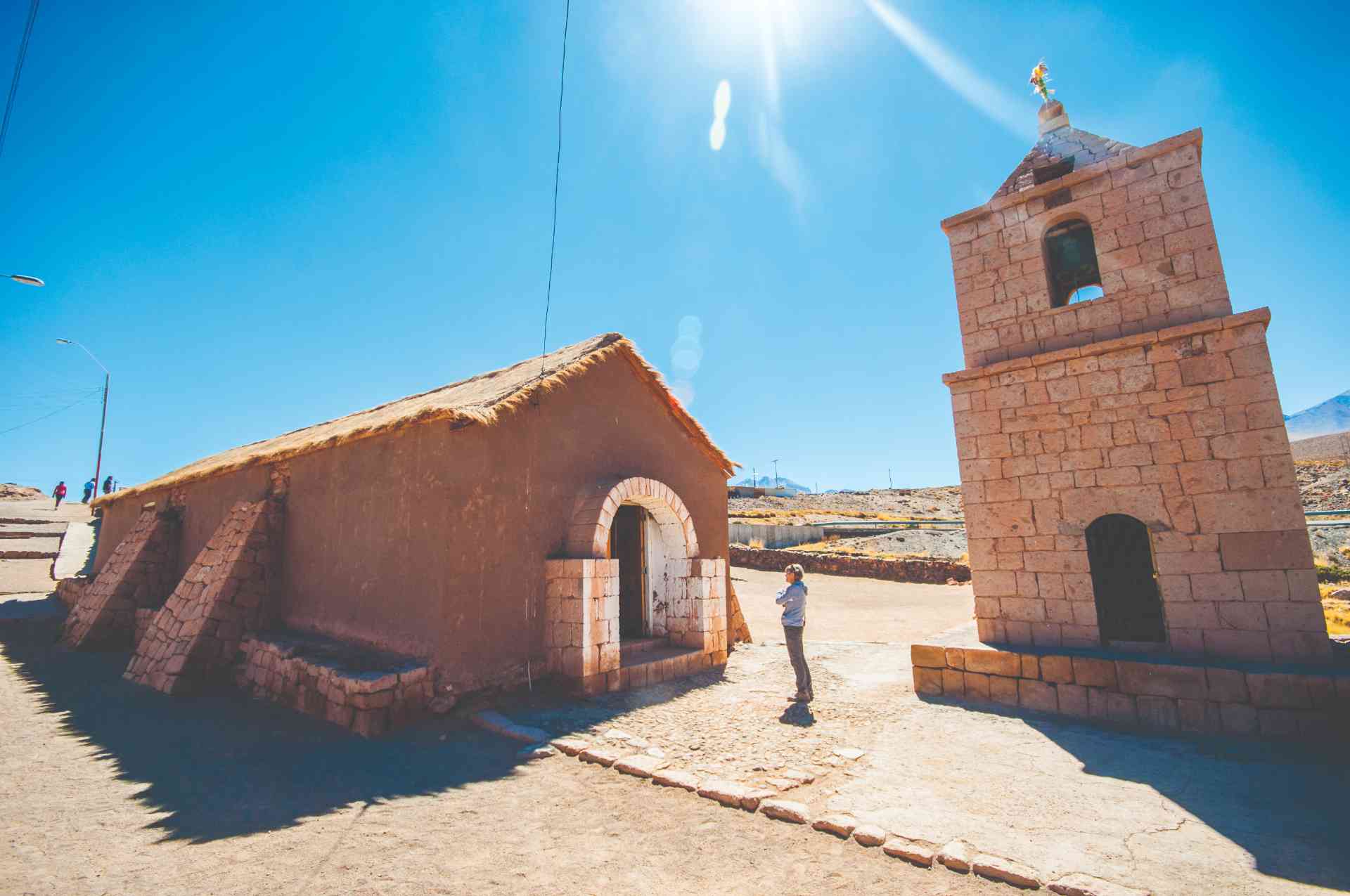 “Alcohol’s not the best thing for altitude sickness,” said Mattias, as he poured a few glasses of vino tinto. “But you all seem to be doing well,” he smiled. “It really doesn’t take too long to acclimatize as long as you are sensible.”

On the way back down we passed a small lagoon glazed over by ice, while an active volcano smouldered in the distance. Over the coming days I widened my explorations. I discovered some of Atacama’s small towns and endless dramatic views, and sampled a skewer of grilled llama. I hiked up 300-meter sand dunes and climbed to rocky outlooks.

I visited 16th-century churches protected by cactus wood roofs and explored 10,000-year-old petroglyphs. I saw more vicuña, guanaco and herds of llamas with identifying tufts of coloured wool on their ears like humane cattle brands.

In the Valle Arcoiris, or Rainbow Valley, we hiked steep hillsides to survey even more vibrant colours, this time reds, browns, greens and blues caused by copper oxide, sulphur, iron and other minerals in the streaked rocks.

Finally, with Johana satisfied that I was fully acclimatized to the altitude, I was cleared to head for El Tatio, which is one of the highest geyser fields in the world and third largest after Yellowstone and Kamchatka, Siberia.

The natural steam baths of the Atacama, geysers

“We’ll leave very early,” she explained as I was heading to my room one evening. “The geysers are at their most spectacular in the cold air of dawn. Make sure you dress warmly, it’s really cold up there.”

We drove for several hours, the first few in the dark. It was impossible to know just where we were, but every time the road roller-coasted down, our ears popped. The windows in the van had frosted over and we scratched at the layer of ice with our fingernails to peer vainly into the pitch darkness. With the sun barely over the horizon, we arrived at the geyser field and marvelled at an almost post-apocalyptic world of bubbling water, dark sands, towering pillars of steam and abandoned machinery once used in an effort to harvest the area’s thermal energy. The temperature was -10 degrees Celsius, and the altitude was 4,320 meters.

Although still more than 1,000 meters shy of Everest Base Camp or Mount Kilimanjaro, this level blew away my gorilla trekking and was easily my highest mark (so far!). I walked through billowing clouds of steam, wary to stay within the marked paths lest a foot (or worse) break through the fragile crust and plunge into the boiling waters below. At the center of the field of more than 80 active geysers was a large thermal pool where brave souls were doffing their layers of clothing to take the plunge.

As the sky lightened and enormous Andean gulls wheeled overhead, the warming air overwhelmed the spectacular display of steam and the early morning visitors began to make their long drives home.

“It was great,” I replied to Joel’s enquiry back at the lodge. “No problems at all.”

“Good,” he replied with a smile. “Next we’ll climb Licancabur and look for that crystal ball!”