Himalayan Frontier | The Ancient Culture on the Northern Range of India

Lessons from the past: “Harmony amid ominous Himalayan peaks was encouraged for centuries just to keep the crucial trade routes buzzing.”

After years of living in the foothills of the Himalayas, here’s how mountain explorer (and tea aficionado) Jeff Fuchs once described them.

Frontiers have long provided conduits both to and from spaces beyond view and imagination. Gateways, yes. But also places that funnel culture, fortunes and armies, and where geography seems somehow to remain in motion. The Indian Himalayas, which thread spectacularly across five northern Indian states, carry a daunting and sublime stillness amid a restless past that tells of all this.

Bold and broad-faced, India’s bastions of heights have been transition zones of culture and terrain for centuries, where the heat of the plains gives way to winds that shoot south, hinting at another world. As the mountains ascend, an ever-more intricate weave of landscape and varying peoples is revealed.

Though borders attempt to demarcate India, China, Tibet, Nepal, Bhutan and Pakistan, all of which share the Himalayan range, populations that reside within its shadowed valleys and plateaus find vestiges of each other. Pockets of untouched life make up a region that has hosted, and survived, the political intrigues of foreign powers, explorers, and unrelenting economic interchange.

Ladakh’s stunning scapes, north of Dehli, are such that even fabled literature can barely acknowledge their magnitude. Giant expanses of the high-altitude deserts of Zanskar immerse one in immensity. Buddhism thrived (and still thrives) here, gently co-existing with the Indian Himalayas’ myriad philosophies. Harmony amid the ominous peaks was encouraged for centuries to keep the crucial trade routes buzzing in peace. In turn, the peace encouraged the route, and its wanderlust traders, to thrive both spiritually and financially. 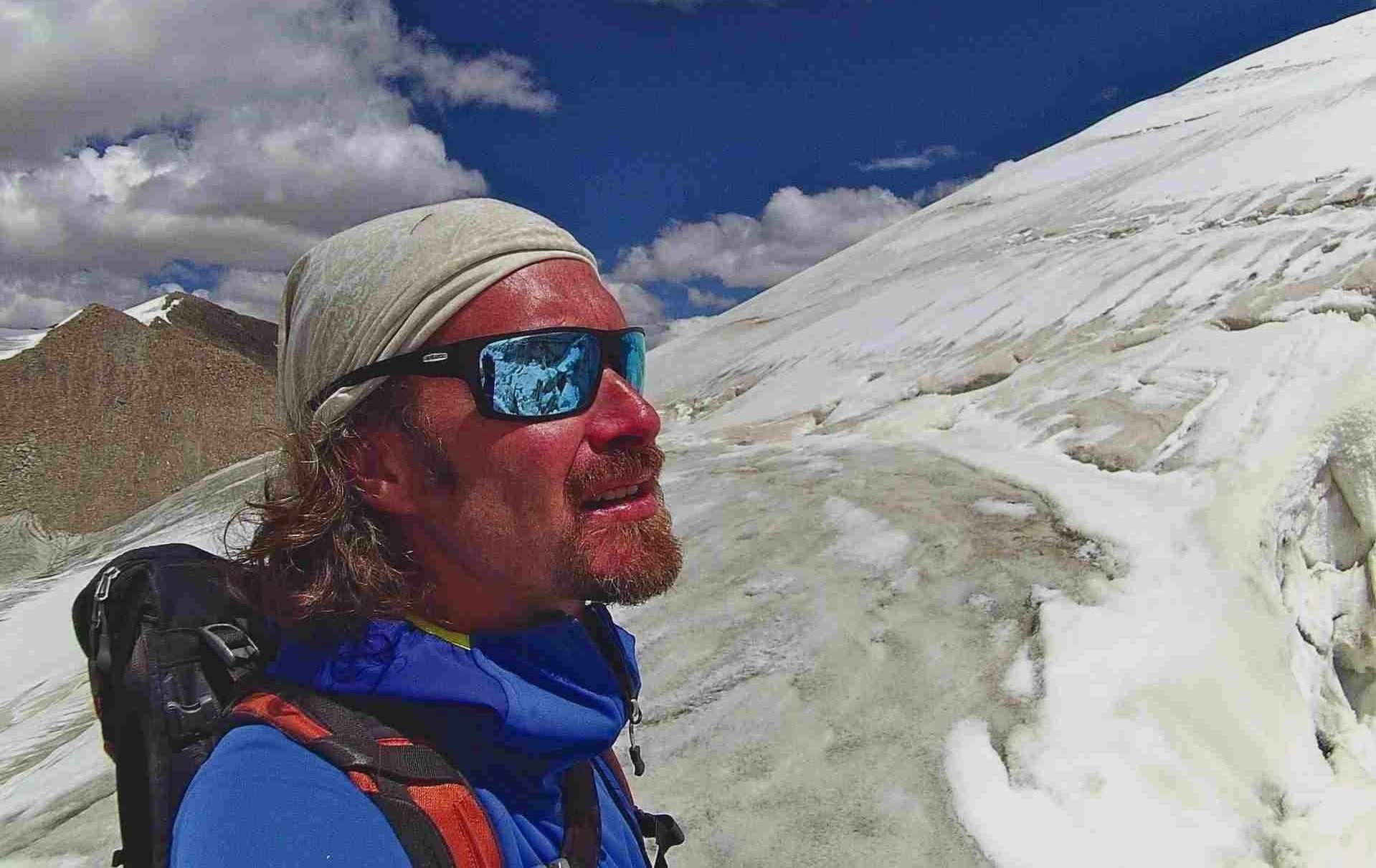 The author, with a high-altitude sunburn, looking at the magnificence of the High Himalayas.

Sand-coloured temples, a vast and archaic library at Thiksey that belongs to another age, and the ancient Himalayan capital of Ladakh, Leh, survive in a kind of indestructible tribute to the past. Blend in the exquisite simplicity of Alchi’s Buddhist grottoes, surrounded by guardian peaks, and one is in a fantastic world.

For those whose senses crave hallucinatory spaces with a touch of the divine, the Kulu and Spiti valleys in northern Ladakh defy imagination. Entire geographies sit against rows of dark folded mountains and hidden apricot orchards, while wandering paths meander up to stunning monasteries with simple cots and simple food. The slightly neurotic Manali, the great forts of Hemis, and the enchanted Lamayuru monastery, best sum up the western flank of the Indian Himalayas: a brilliant, powerful place, where colour, wind and faith all play their part.

There are rare places that remain beyond the realm of words, needing only senses to partake—the western Indian Himalayas are one of these.

East along the sub-Himalayas, through heat and the deliciously unpredictable pace of life, comes a less stoic confluence of mountain culture and landscape. The magic kingdom state of Sikkim, and its neighbour West Bengal, offer up colonial remnants, a trade legacy, and a lushness that striates through the sub-Himalayan Plateau.

Tea, trade and the hovering, spectral mass of the world’s third-highest mountain, the 8,586-metre Mount Kanchenjunga, all create a softened version of the Himalayas.

Sikkim’s ancient capital, Gangtok, and the understated trade town Kalimpong, still carry the bizarre and wonderful flashes of pomp from their days as mini-meccas. Sharp, business-minded Marwaris, Bengalis and Tibetan traders all join with other peoples to create a weave of culture in every metre travelled.

For one whose palate runs to Asia’s ancient beverage—tea—Darjeeling and its famed fields display rugs of plantations across the mountains. Here, mists and clear air play peek-a-boo with views. And the whole area hints at a distinctive tone that reminds one the Himalayas are so much more than stone. ♦