Pounding waterfalls, spicy street food and the biggest after-harvest festival in India. Here’s where to eat, what to do, and how to get around Thrissur, the cultural capital of Kerala.

Scenic views wherever you turn your head to, a never-ending trail of spices constantly tingling in your nose, a reluctant cold breeze and a countryside cottage—this is a regular, sunny day in Kerala, the southernmost peak of the Indian subcontinent, almost resembling a bitter gourd, guaranteed to leave you mesmerized.

For most Indians, Kerala is known for boasting alluring mountains, serene backwaters and all other elements of a dreamland, but for me, Kerala is more than that. 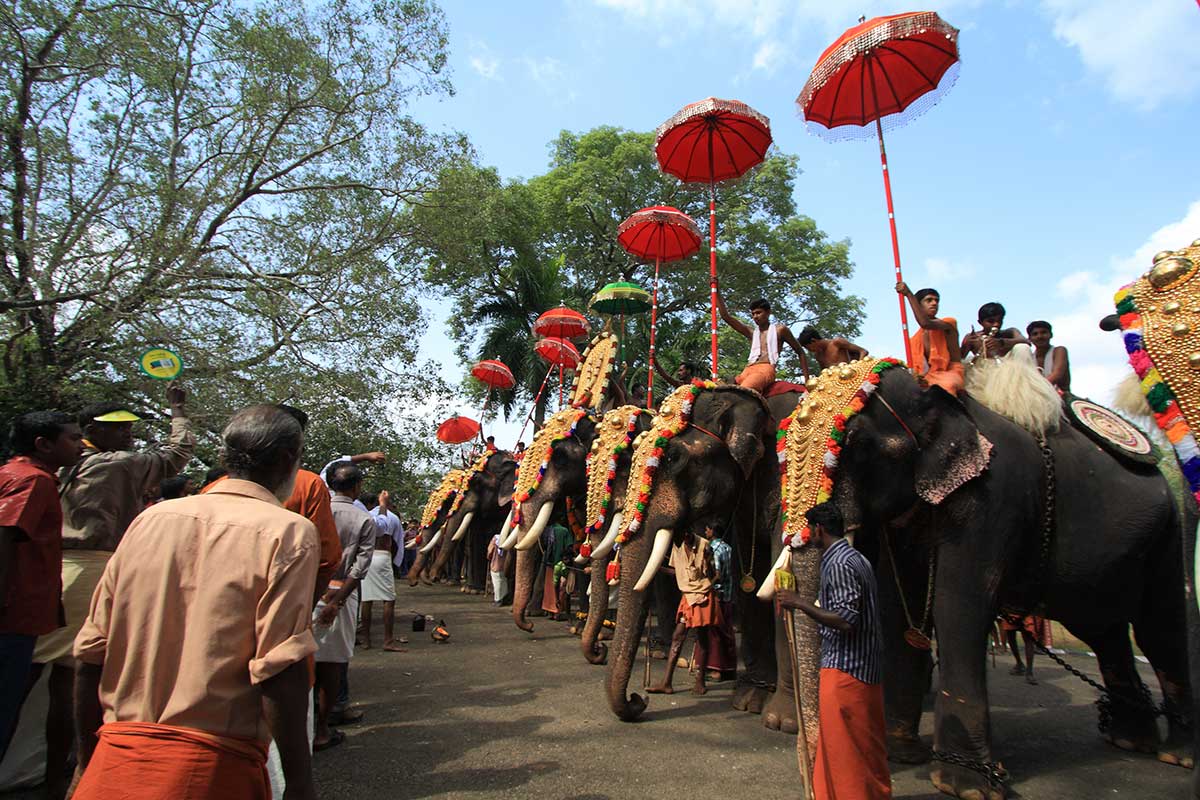 For me, Kerala is the place to enjoy Thrissur, the city where I spent most of my summer vacations as a kid, the city that has time and again reminded me of my roots. This stunning place is where I find tranquility and madness existing hand in hand.

I’ve been visiting Thrissur for nearly 23 years now, and every time I visit, I learn something new about the place.

Thrissur is the cultural capital of Kerala, brimming with an energy that is impossible to miss, all while bringing an enticing calmness in you. If Kerala is the state that offers serenity, then Thrissur is the city that sprinkles some life and madness on it.

The word that strikes synonymy with Thrissur is a pooram. Thrissur is famous for hosting the biggest after-harvest festival in India, the Thrissur Pooram, held in the Malayalam month of Medam (April–May). This majestic seven-day phenomenon, with a main event occurring on the sixth day, was started in 1798 by the then-ruler of Kochi. Beautifully swaddled elephants are lined up in front of a huge crowd; drums beat rhythmically for the Panchavadyam; fireworks shoot off and elephants parade around. But be warned: no one except a true culture junkie can stand the heat of southern India in the sweltering months of April and May.

The pooram is held at the Thekkinkadu Maidan, which is a hillock that seats the Vadakkunnathan Temple. Taking a cab or a bus from the Thrissur railway station is the most feasible option to reach it, approximately 2.5 kilometres from the station. The KSRTC bus stand is also 2.5 km away and would be a viable option to get to Thrissur from other cities in Kerala.

Thrissur has extremely ancient temples, mosques and churches, which, if I may add, are remarkably breathtaking as well. Guruvayur, Vadakkunnathan, Kodungallur, Paramekkavu and Thiruvambady are some of the most well-known temples in Thrissur, dating as far back as the 14th century.

The Vadakkunnathan Temple is the main temple that hosts the aforementioned pooram. Two rival processions—the west procession hosted by the Thiruvambady Temple and the east hosted by the Paramekkavu Temple—meet at the Thekkinkadu Maidan during the pooram. If you’re planning on taking a day off for a religious tour, I’d suggest covering all three temples together, since they’re very close to each other. The Guruvayur Temple is approximately 30 kilometres away from the Thekkinkadu Maidan.

Southeast of the Maidan lies the third-tallest church in Asia, the Our Lady of Dolours Syro-Malabar Catholic Basilica. This church is a must if you’re a Gothic architecture lover! Apart from the church, The Cheraman Juma Masjid, built by an Arab propagator of Islam, Malik Deenar, proudly stands as India’s first-ever mosque, near the Kodungallur Temple by the ocean’s coast.

The nearest railway station is the Irinjalakuda railway station, nearly 350 metres from the masjid. If rail travel is not your thing, I’d suggest taking the state-transport buses that shuttle between Ernakulam, Thrissur and Kodungallur.

Regardless of the time of year you are in Thrissur, the one thing that you cannot miss is the Anakotta, or the Elephant Sanctuary, in Guruvayur. Elephants are a pretty huge deal in Kerala, and they’re decorated and associated with certain rituals in almost every festival fair held in the state. The Guruvayur Anakotta keeps elephants of all sizes and shapes. So a 30 minutes’ walk in this beautiful sanctuary should be enough to entertain you about how the mahouts feed, train and maintain the well-being of all the elephants.

The best time to visit is at 3 p.m., because that is when they feed the elephants. The temple is located near Guruvayur temple, just 2 km away. If you’re coming from Guruvayur, take the Anakotta road from Mammiyoor.

Also tagged as the “Niagara of India,” the Athirappilly Falls is one the most visited tourist attractions of Thrissur. These falls, located at the porch of the Sholayar hill range, continue beyond as the Chalakkudy River.

You need to shell out an entire day to visit this place, and the most apt time of year would be between September to January. If you’re taking the train, head to the Chalakkudy Railway station, otherwise a bus ride from the Athirappilly bus station would also do.

This one’s for all the nature lovers out there. This stunning place offers a plethora of flora and fauna, including many types of orchids and an unimaginable amount of rare medicinal plants. This beautiful place contains the best of the Vazhani wildlife sanctuary and Peechi dam.

Wish to see a procession of tigers on two legs? The tigers I’m referring to here are men painted as tigers and hunters! This renowned and grand folk art, an age-old dance procession, will unarguably be a treat, and is performed on the fourth day of Onam, the harvest festival of Kerala. With a very peculiar combination of tempera powder and enamel, the paint made is applied on the Puli Kali dancers. The entire procession is sure to take your breath away.

When should you visit? I recommend during the harvest festival of Onam, which falls on the first month of the Malayalam calendar, around August–September.

Places to Satisfy Your Hunger Pangs

Thrissur is the major hub for spice trade in Kerala, thus the city never lags in terms of sumptuous delicacies. Local dishes, authentic Kerala cuisine, Mughlai cuisine and teeny roadside stalls that sell Lebanese food—you name it, and the city will offer.

Your One Stop for Street Food

As a craver for good food, I suggest going on an empty-stomach to the Thrissur Pooram, since the stalls that are lined up in the fair, while the pooram goes on, are the ultimate in south Indian street food. These vendors can be found year-round near the city centre.

Since all the temple visits would take a toll on your energy level, make sure you visit the Ming Palace restaurant for an excellent and large-portioned Indian twist on Chinese food, and the two restaurants in the Hotel Bharat, which lie just on the out skirts of the Maidan, and are eminent for their heavenly Kerala cuisine.

While in Guruvayur, you’ll want to relish the local food that is offered by the numerous teeny-sized restaurants that stretch out on the entire road leading to the temple. An entire meal for 150 Rs (around CAD$3). A healthy, filling, cheap, locally sourced meal—what else can a hardcore foodie ask for?

The chain of restaurants called the Indian Coffee House is a household name across all of India, but especially Kerala and Thrissur, which boasts the most per-capita in the country. This humble co-operative chain, not so fancy but very authentic and with a rich history dating back more than 50 years, will lighten your mood with rich coffee, dosa, toast and biriyani.

If you’re a craver for Lebanese cuisine, you absolutely cannot miss the roadside stalls that sell shwarma, shavai, pita bread with hummus and many other such delicacies from the Middle East! They are all over Thrissur, so you shouldn’t have any trouble finding them.

On an ending note…

The soothing sounds of coconut trees, the everlasting smell of jackfruit, the recurring croak of frogs over the night and the cool breeze calming me while I sleep—this is the kind of peace that lures me into visiting Thrissur every year without fail.

If you’d like to experience what it is like to feel that sort of a peace, have a visit and Thrissur will not let you down. I offer my personal guarantee!

Nithya Muralidharan is a highly dramatic 23-year-old writer, traveller and engineer with a roaring appetite for books, movies and anything related to food. She's an old-school type with occasional bouts of flippancy to certain things and a seeker of different cultures and traditions.

Two Days in Košice | in Slovakia