A group of eco-tourists travel to Nunavut, Canada, to snorkel and kayak amid belugas and narwhals before their annual migration through the Northwest Passage.

I heard the deep thumping sound of the rotor blades long before the two combat-green CH-146 Griffon helicopters crested the hill and landed beside our group huddled around a makeshift Inuit hunting shed on the northern tip of Baffin Island.  Major Martin Pesant, a pilot with the 438 Tactical Helicopter Squadron from St. Hubert, Quebec, strode up to me, immaculate in his flight suit, helmet and aviator glasses, and shook my hand.

“You must be very happy to see us, Madame,” he said.

For the past 36 sleepless hours, our group of eight eco-tourists and 12 guides, including four Inuit, had been living life on the edge—the ice-floe edge, to be exact. 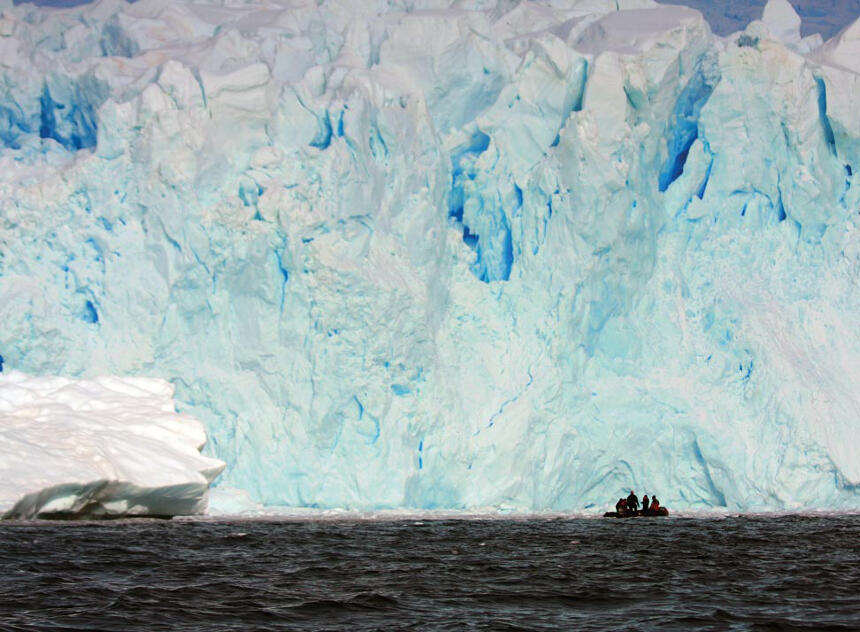 There’s no doubt that our intrepid group of extreme snorkellers—from Australia, Canada, England, France, Japan, Jordan and the United States—had anticipated a grand adventure in Nunavut. We’d travelled to the land of the midnight sun, to snorkel and kayak among belugas and narwhals as they congregate along the ice-floe edge prior to their annual migration through the Northwest Passage.

Early in the expedition, we experienced a storm with heavy rains and high winds that buffeted our sturdy safari. The storm, combined with the summer solstice super moon (and its associated high tides), caused the ice sheet we were camped on to break free of the adjacent land. And so, set adrift on a floating ice island, we embarked upon a very different type of grand adventure than we had originally thought to.

Trapped on a moving sheet of sea ice—measuring about nine square kilometres and some 1.5 metres thick—we drifted 19 kilometres to the north-northeast up Admiralty Inlet. The water-flooded ice island picked up speed, travelling up to 1.7 kilometres per hour, as we floated toward the open Arctic waters of Lancaster Sound, the gateway to the Northwest Passage.

A lumbering CC-130 Hercules had arrived from Winnipeg, six hours after the distress call was placed.

Circling overhead, the huge grey aircraft flew at low altitude over our ice island, its black contrails streaming across the Arctic sky, and dropped survival equipment, including three 20-person life rafts and a satellite phone. 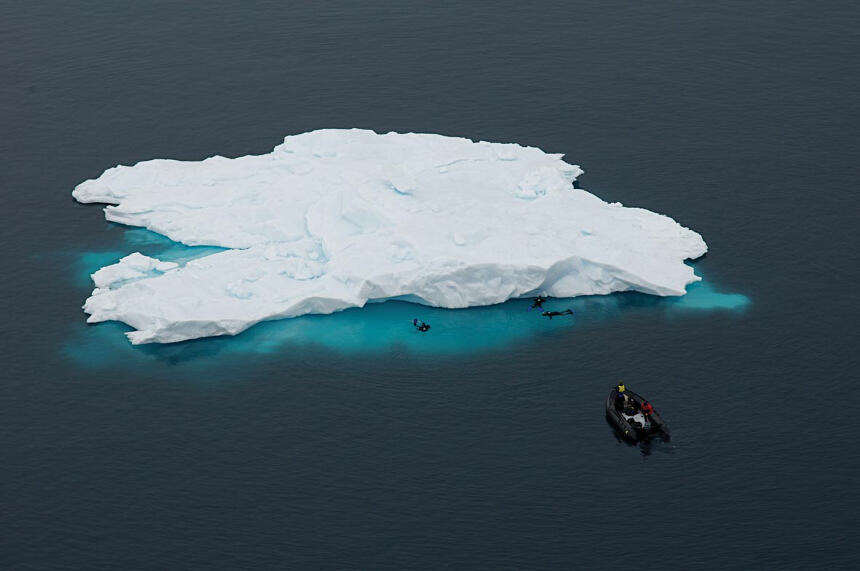 But when a corner of the water-flooded ice island grazed the headlands of the Borden Peninsula on Baffin Island, we saw an opportunity to escape the ever-shrinking ice island. Quickly mobilizing snowmobiles, sledges, iglootuks (wooden Inuit shelters carried on sledges) and kayaks, we scrambled over the rafting ice to terra firma, where we were eventually rescued by the 438 Squadron known as the “Wildcats.”

Later that same day, the Wildcats retrieved 10 Inuit hunters and a young boy—their odyssey on a separate floating ice island, where their adventure (so to speak) had begun similarly just a day prior to ours. (That group also reached safety elsewhere on Baffin Island before being rescued).

Suffice it to say that my life as an extreme snorkeller has never been dull—or predictable. From Antarctica to Nunavut, I’ve experienced many life-defining moments of exploration and discovery in the snorkel zone, a unique water-air-land interface where charismatic mega-fauna congregate and interact with humans.

Snorkelling in a gin-and-tonic mix of brash ice in Antarctica I’ve come face-to-mask with a 1,400-pound leopard seal—so close, in fact, that I could count the freckles on the seal’s upper palate and inspect its tri-serrated teeth, which can dispatch a 40-pound penguin in mere seconds. I held my ground during the animal’s bluff charges, pulling my arms into my body, and quietly waiting for the charismatic predator to accept me in his environment.

Snorkellers are rare in Antarctica, and I was hoping that my Arctic-rated dry suit didn’t make me resemble a penguin on steroids. The pas-de-deux that eventually ensued between me and this elegant, lizard-like seal was magical, and well worth the wait.

My extreme snorkelling adventures have taken me to extremely remote and extremely beautiful places on the planet. I’ve been towed behind a boat in Hudson Bay, like bait on a line, to interact with chatty belugas that can turn their heads 90 degrees just to inspect us snorkellers. Churchill, Manitoba, may be known as the polar bear capital of the world, but its best kept secret is the 3,000 or so belugas that congregate every summer at the mouth of the Churchill River, where they raise their young, exfoliate their skins on the rocky river bed, and play bumper cars with tourists who venture out in kayaks. 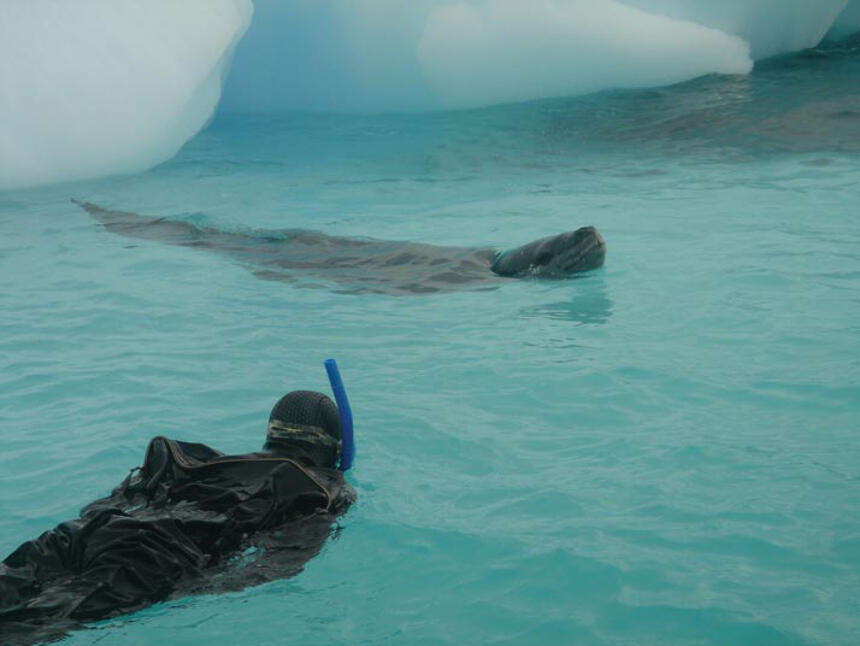 Applying my extreme snorkelling skills to ocean research, I’ve assisted the Haida Nation with its salmon program, snorkelling the rivers of the Haida Gwaii archipelago, and counting salmon as they migrate toward their ancestral spawning grounds. En route, both the salmon and I managed to dodge the sleek black bears, Ursus americanus carlottae, fishing along river banks for their next omega-rich meal.

In 2010, I joined the Elysium Visual Epic Expedition.

As a geophysicist, science journalist and extreme snorkeller—bound for Antarctica and South Georgia. Led by Michael AW of the Ocean Geographic Society, Elysium carried the Explorers Club Flag Number 108 right to the bottom of the world.

The Elysium Team, comprised of 57 explorers from 19 nations, retraced the route of Sir Ernest Shackleton’s Imperial Trans-Antarctic Expedition (1914-17), a journey that went horribly sideways when his ship Endurance was crushed by ice and sank. Elysium’s mission was to conduct oceanographic studies and scout, record and document the impacts of accelerating climate change—both above and below the water—on the planet’s last remaining frontier. Deploying plankton nets and digital video plankton recorders in the Scotia Sea, we studied the distribution of krill, a shrimp-like animal and the keystone species in Antarctica. 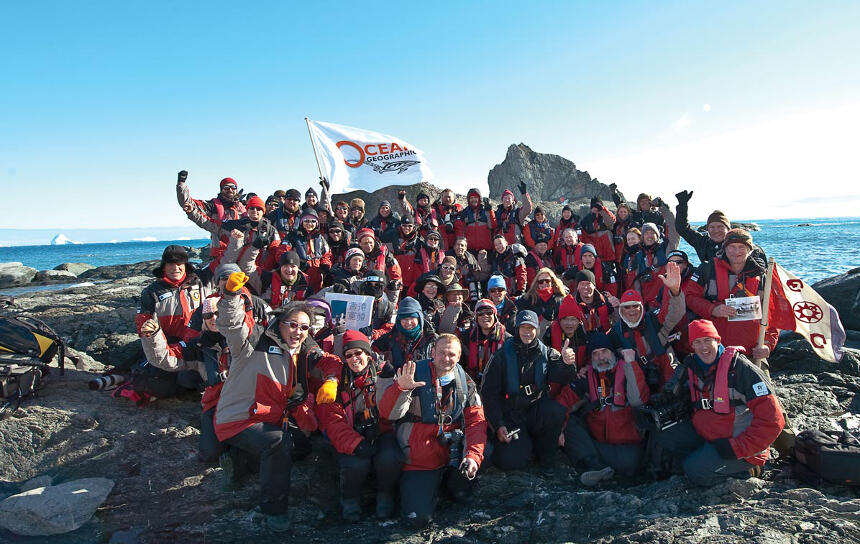 Yet, despite all of these amazing adventures, I haven’t always been an “extreme snorkeller,” a term that I’ve personally coined, and one which was born out of necessity.

A lifelong scuba diver, I’d never really taken snorkelling that seriously. Seven years ago, however, my 32-year-long scuba diving career—which had included teaching diving—came to an abrupt and unexpected end in Belize.

My transformation to an extreme snorkeller was precipitated by a dive trauma—an arterial air embolism—which was caused, the physicians concluded, by a previously undetected congenital heart defect that is common in about 30 percent of the adult population. Following the dive trauma, I spent three days in an oxygen-filled, hyperbaric chamber that measured 1.5 by five metres in diameter.

Yet my lifelong love affair with the marine environment didn’t end in that hyperbaric chamber. Within a couple of years, I morphed from a passionate scuba diver to an equally passionate extreme snorkeller.

My personal journey into the snorkel zone illustrates that there’s life after scuba diving, that there’s no need to hang up your mask, fins and snorkel.

The snorkel zone offers an accessible window into the wonders of the aquatic world that divers often overlook—it’s a peaceful place where scuba bubbles just may not be welcome (or allowed), and where the exhalations from snorkels and blowholes are often indistinguishable. 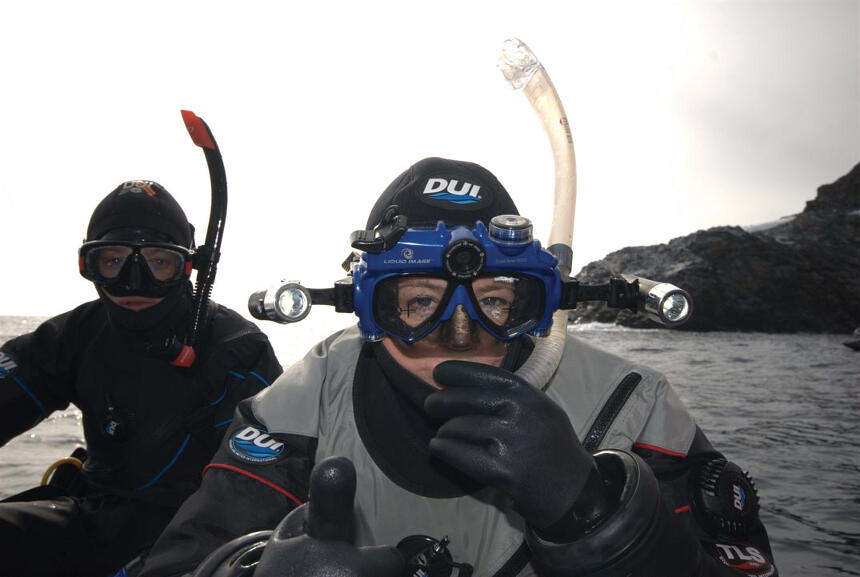 Bathed in sunlight, the snorkel zone provides a full light spectrum that is ideal for photography and videography. Less equipment-intense than scuba diving, snorkelling can become a lifelong activity enjoyed by those who no longer wish to don heavy tanks and equipment. And snorkelling is the perfect activity to introduce the amazing underwater world to children who are too young for scuba certification.

Happy to exchange polar waters and dry suits for temperate waters and shorty wet suits, I’ve snorkelled in the Galapagos Islands, where sea turtles generally outnumber snorkellers and sharks hide under every rocky crevice.
On one memorable outing, my snorkel buddy and I became engulfed in a bait ball made up of thousands of small fish swimming in a spherical formation, a defensive pattern designed to reduce predation.

We were marvelling at our good luck, our Serengeti moment, when the primordial food chain kicked into action.

Sea birds materialized, seemingly out of nowhere, dive-bombing into the roiling bait ball, hitting the water at astronomical speeds around us and plummeting some five to 10 metres into the ocean. Large pelagic fish emerged from the deep waters, cutting swaths through the bait ball and gulping the fish at an alarming rate. The arrival of a very large fur seal (with glistening white incisors) signalled our rapid retreat from the feeding frenzy.

Admittedly, I’ve been approached, and even hugged, by West Indian manatees in Crystal River, Florida, where the gentle creatures overwinter in the warm, fresh springs of Kings Bay. Trusting to a fault, and slow to move from danger, these docile herbivores live in a winter refuge that is rapidly becoming urbanized. Every winter, more than 150,000 people visit Kings Bay to snorkel and kayak with the area’s 500 manatees, loving them to death in the process, with increased boat traffic and sometimes stressful up-close-and-personal encounters.

Yet the joy of experiencing such Serengeti moments in the snorkel zone is predicated upon the absolute need for snorkellers to ensure careful and respectful interactions with its wildlife—we should never chase, corner or impede these charismatic animals that we’ve often travelled great distances to view or photograph.

Some of my most memorable interactions involve observing, from a respectful distance, animals as they perform their daily chores—foraging for their next meal, or feeding their young. I’m welcomed into their aqueous homes, like a distant relative who has stopped by, unexpectedly, for tea. **

Even for an Italian Like Me, Rome is the Eternal City