Since the beginning of time, people have believed the Earth is flat. But if seeing really is believing, here’s a few steps you can take to see the curve.

Since the very beginning of time, there have been those who have believed that the Earth is flat. If seeing is believing, throw away your Flat Earth Society membership and take these steps. 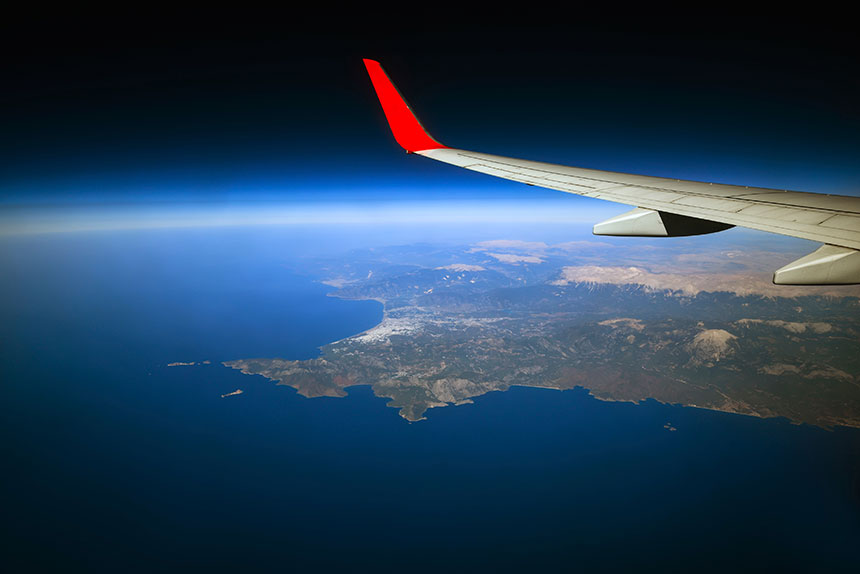 Planet Earth from above, where its curvature can reveal itself. (Kyslynskyy-iStock)

A few weeks ago, Grammy-nominated rapper BoB told the Twitterverse that the Earth is flat. His epiphany apparently came during a 2012 flight made at the same time that Austrian skydiver Felix Baumgartner was leaping from a balloon high in the Stratosphere above New Mexico. The pilot on BoB’s flight told everyone on board to look out the window to see the sun glinting off Baumgartner’s balloon floating five miles away. When BoB saw Baumgartner’s balloon but not the curvature of the Earth, he followed in the footsteps of centuries of sceptics and concluded that the Earth is flat.

Apparently, BoB is not alone. Google Trends have reported a sharp increase in people searching “Is the Earth flat?” over the past few months, and a poll in the British newspaper The Telegraph had 7% taking BoB’s side. BoB had reasoned that no matter where he’d been or how high he’d flown, he’d never seen first-hand evidence that the Earth is round and since seeing is believing, he’d chosen to disbelieve.

If you believe that the Earth is round, or are at least willing to give that theory a chance, where on Earth can you venture to de-bunk BoB?

Obviously space, or very high altitude, is your best bet. Unfortunately however, although space tourism is edging ever closer, it’s still not quite here which means that we can rule out that particular vantage point at least for the time being. Until a decade or so ago, Concorde was the next best thing. I took the above photo from a British Airways Concorde at about 58,000 feet on a “trip to nowhere.”

It was taken with my brother’s old Pentax SLR and a standard 30mm (ish!) lens. Pressing my nose against the aircraft’s window and gazing from side to side, the curve was even more pronounced than the photo suggests, but these days I have to settle for those pictures to assure myself that BoB is mistaken.

Although Concorde no longer flies, there are similar aviation opportunities using retired military fighter aircraft in Moscow. Sadly, they make Concorde look like a bargain which means that most of us must turn to more terrestrial alternatives. But is it possible to view the curvature of the Earth without taking to the sky?

When I was in Chile a short while ago, I met a couple from California who had started their travels on Easter Island. They claimed that while standing on a particularly high point and gazing out at the endless ocean, they could clearly make out the curvature of the Earth with their naked eyes. Many of us have had similar experiences when perched on cliff tops and looking seaward, but is it just our minds playing wishful tricks?

Scientists say that anyone flying at 35,000 feet on a clear day and with at least a 60-degree field of view will be able to discern the curve. However, when it comes to seeing it from ground level, many suggest that while it’s theoretically possible, it’s not guaranteed. If you do want to challenge BoB, there are a few things you need to take into consideration.

Skyscrapers might do the trick, but they’re not always surrounded by flatness and their views are often at least somewhat obscured by pollution, other buildings or, in the case of Dubai’s Burj Khalifa, often heat shimmers and haze.

While mountains are often even higher, most of the world’s highest peaks are in the middle of mountain ranges and therefore when standing on top of Mount Everest, for example, any chance of seeing the curvature is spoiled by the peaks of the surrounding Himalayas.

If you do give it a go and think you can see the curvature but fear it may just be your eyes playing tricks, there is an experiment you can perform. Take two sticks – or tripods, ski poles, ice-axes etc – and place them in front of you. String fishing line or any monofilament between the two using a spirit level to ensure that the line is perfectly straight. Then move back until your vantage point allows the filament to be aligned with the horizon. If they line-up perfectly, you’re not witnessing the curvature of the Earth. However, if there’s any discernable and consistent dip of the horizon away from the string, you are indeed seeing the curvature of the Earth.

One day, I’m going to trek to that Easter Island hill-top to perform the experiment myself, and maybe I’ll take BoB with me!

The Expat Life | Why Do You Want to Live Abroad?

Still no curvature. The fact is that you can see Chicago from Michigan.

I saw another way that some high school students in the USA did: they made something like a weather balloon with a gopro attached to it, designed to detach when the balloon popped and fall back to Earth with its custom parachute. Then they retrieved it using GPS. You could definitely see the Earth is not flat on a macro level.

Oh they used a GoPro which is has a fish eye lens which curves what you see? Gotcha

It would have helped the argument if you had posted the actual photo from Concorde.

I just don’t understand why is this day and age, People still believe the Earth is flat ?. In 1987 whilst visiting Australia, at that time we were able to scale Ayers Rock, which we did and although I didn’t take note of the direction, from the top of Ayres Rock there is a very clear view of the curvature of the earth.

Because flat earth justifies the existence of god, and makes the earth the center of everything, the ultimate project of god, and the salute of weak people that can’t stand the idea of a earth lost in the middle of nowhere and ultimately without any hope

Pierre,
I use to think the same thing, I use to believe, when I was out on my boat, or on the shore I could see the curve. But I was wrong. The horizon is a perfect flat level circle. So ironically the FE people and the “globalist” as FErs would say are both wrong. You see a curve, but it’s the rim of a disc. Take a dinner plate and hold it perfectly flat at eye level, it makes a straight line, now start to tilt it, the straight becomes an arc, but the plate didn’t change, we are just looking at it from a different angle, the higher up the rounder it gets, but it doesn’t prove a sphere (although you can deduct that) but FErs claim we live on a disc.
To see the curve,to see a yamaka hat you need to get closer to sea level on relatively calm water. What you will see is the water actually curves up to meet the horizon, which is determined by how close your eye is to the surface. Technically if you are right at the surface, you cannot see any horizon.
Pick an object like a boat maybe a mile out. Now from standing, the horizon will be beyond the boat, but as you bring your eye closer to the surface, you can actually move the horizon to Infront of the boat. The water will rise up in front and then though you can’t see, curves back down.

Thats clearly not a Concorde wing. The flight height may be accurate, but that photoshop is lame.

Nowhere is it claimed that the picture was taken from Concorde, in fact it even says it is from iStock.

“I took the above photo from a British Airways Concorde at about 58,000 feet”

I don’t even understand this being a question. I read about the ‘proof of the rising ship’ from centuries ago when I was in elementary school. I would call that visible evidence of curvature.

Why does no one look up, way up as friendly the giant used to say. The Earth is not confined to solid and liquid it is also a gaseous sphere and that gas often stratifies with a uniform layer of high cloud that arcs overhead. It is the bias of our culture that believes we live on Earth, not within Earth. I don’t know the math on how far above the observer a visible layer must be before the curvature is evident but every scientist I have ever heard on the topic says it is not possible to see the curvature from the planet’s ‘surface’. Until someone shows me the math to the contrary I will believe I see the planet curve overhead almost every day.

Hi Mika, you’re absolutely right—except we weren’t lying intentionally! We recently redesigned our website and a bunch of photos from the earlier design didn’t make it through in the transition; that one of the Concorde disappeared somewhere. I’ve dug through the archives to find it and clarified the column. Thanks for pointing it out!