There’s a 200-metre drop to my right. I can no longer see the 300-metre drop to my left, only because a grey mist rolled into the valley and hit with locomotive speed. But I can sense the emptiness of the void through the gauzy swirls of fog, and can feel the buffet of the wind deaden and drop. I am a 5.9 climber at best, 5.10 if my belayer shoves me and I had a good breakfast.

So, why am I 2,500 metres up an Italian Alp? The answer lies in the steel via ferratas cable behind me.

Via ferratas means iron road, or iron way, in Italian. Basically, it’s a climbing route that consists of a variety of cables, iron rung ladders and bolted handholds festooned across various mountains throughout northern Italy, and parts of Austria and Germany. The system, along with a special harness and a head for heights, allows hikers and less experienced scramblers to reach places normally attainable only by expert-level climbers. Whether you want to call it extreme hiking or climbing lite, it’s a hell of a way to experience these mountains. And we had come here to do just that. 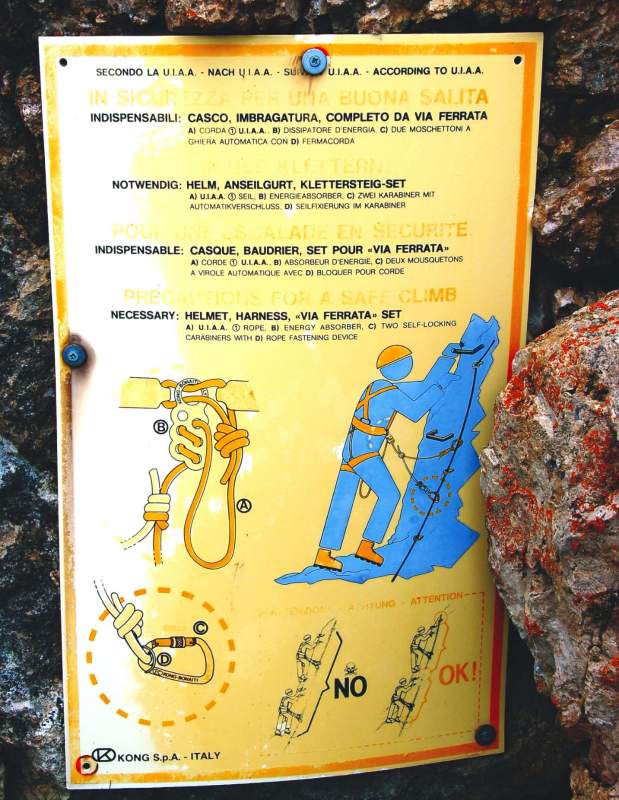 Instructions along the via ferratas route

My companion, Jane, and I had decided to base out of Campitello, one of a string of pleasantly rustic little mountain communities dotting the Val di Fassa in the heart of northern Italy’s Dolomites. There’s a smattering of cafes, ski and gear shops, pizza joints and bars, all set against an impressive alpine backdrop. Reaching the trailhead here means turning left off the main strip and just walking 100 metres up into the treeline.

We started later in the afternoon than expected. I had made arrangements with a mountain guesthouse for the evening, and was now barely hoping to be there before nightfall. We started walking up a noticeable grade along a gravel road. Fifteen minutes along, an old green Land Rover with a grizzled driver pulled up. Mountain taxi. A few euros each and we saved three kilometres and an hour. He dropped us off at the mouth of a large and green alpine valley, complete with bubbling stream, and the distant mournful clatter of goat bells. 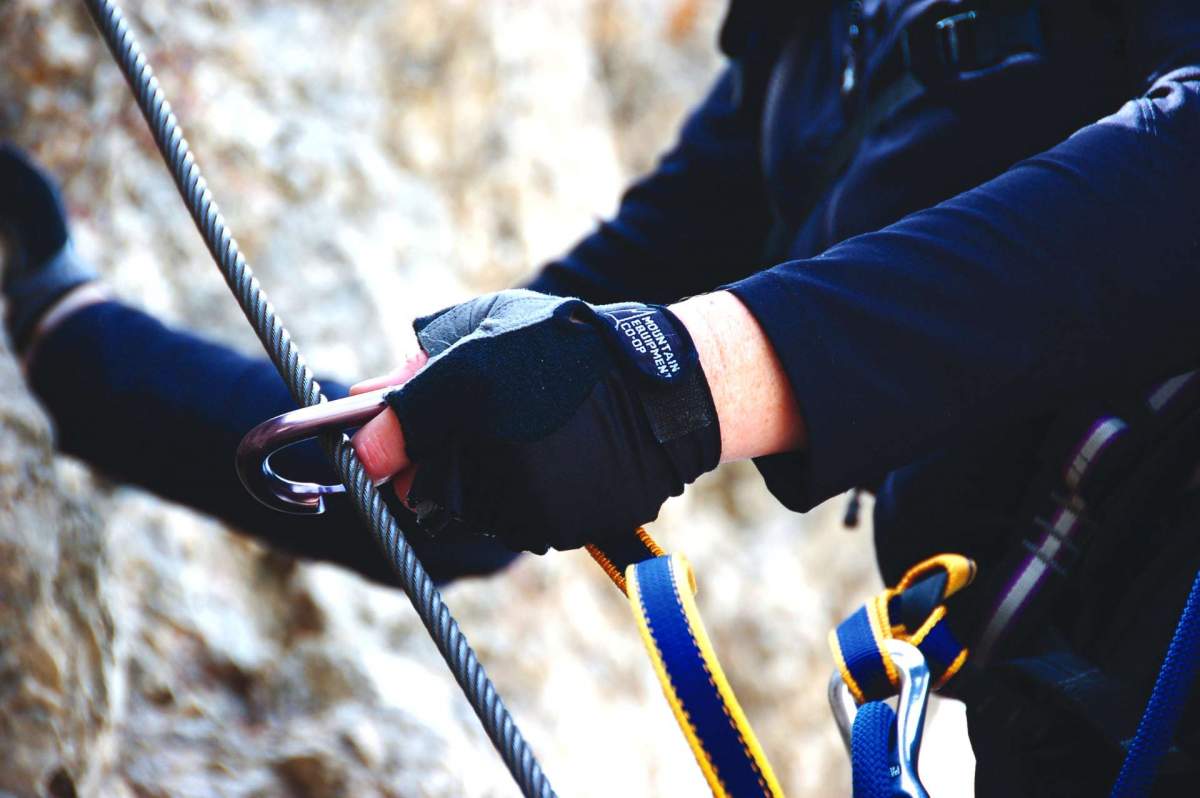 Slow and steady wins the race: via ferratas allow novice and non-climbers to enjoy the mountains.

At the head of the valley loomed the massif, a great grey battleship of rock that steadily engulfed the sky as we moved up and into the mountains. The walk was pleasant at first, with a pastoral feeling brought on by scattered sunshine and dots of wildflowers edging the stream. Then the grade perceptibly increased, the sun disappeared behind the western peaks, and it became a grinding process, a four-hour slog that finally ended at dusk at the Rifugio Alpe di Tires, the mountain guesthouse, complete with hot pasta, cold beer and a warm bed. I deemed all three necessary preparation for the following morning’s climb. 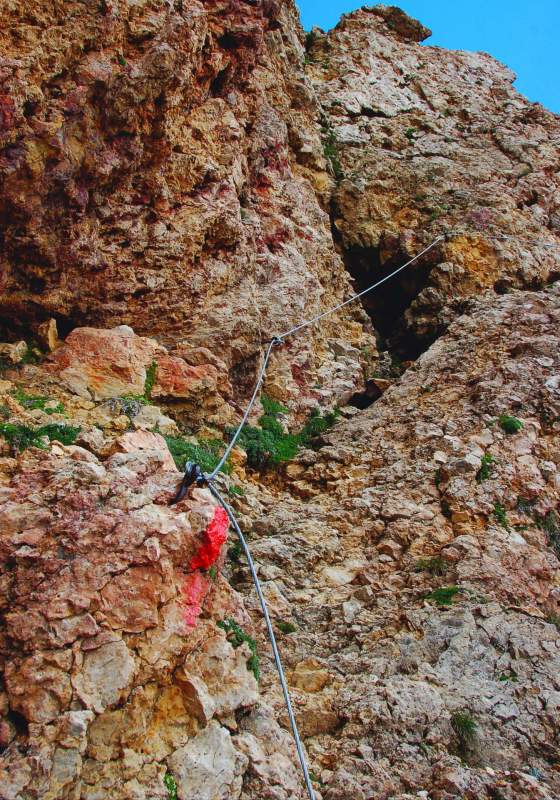 Via ferratas (the iron road): remnants from the First World War transformed into a tool to explore the mountains

The via ferratas is mainly a legacy of the First World War. The Mountain War, as it was called locally, saw Italians pitted against Austrians in a little known sideshow to the trench warfare immortalized on the Western Front. In order to assist the movement of troops and supplies, these artificial climbing aids were placed and embedded along mountain paths and passes. In some cases there were ladders and full gorge-spanning suspension footbridges; in others, hundreds of metres of cable bolted into the rock; and in still others, a simple metal handhold drilled into a cliff face at a dangerous spot.

Avalanches and the weather took their toll, along with the normal attrition of war, and more than 60,000 men died on both sides. In one instance, the Italians carved tunnels hundreds of metres through the bulk of a mountain to place explosives. The Austrians heard them coming but were ordered to stay to maintain control of the high ground. Many men died in the subsequent explosions. The tunnels are still there, and this may be the only place in the world where you can climb down a mountain on the inside. 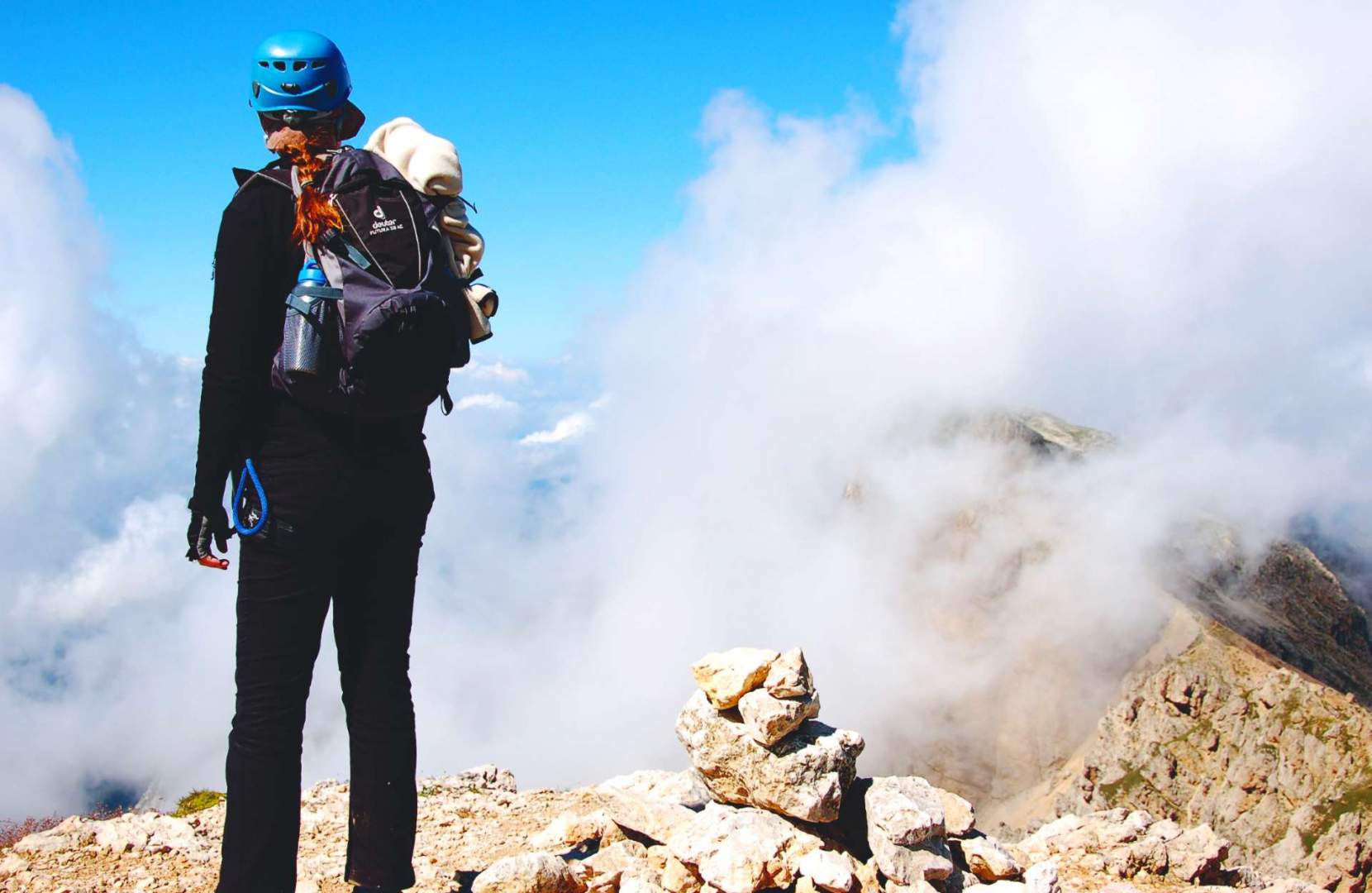 Jane admires the view from the top, with help from the via ferratas

Years after the war, the mountain clubs in the region repaired the old routes with new hardware, and added new routes across other heights. Yet in many places, the detritus of warfare is evident in a simple weathered ladder clinging to a rock face, or in a cramped wood-and-concrete bunker still keeping a lonely vigil.

We woke early, breakfasted on tea and coffee and bread dipped in honey, and simply walked out the back of the building a hundred metres to the start of the via. Two main pieces of equipment are needed: a climber’s helmet and a via ferratas kit. The kit is a safety system—essentially, a climbing harness attached to two short lengths of webbing with carabiners on the ends, plus a device in the middle that dissipates kinetic energy in the event of a fall. This is either a series of tearaway fabric loops, or a metal plate similar to a figure-eight descender that slows the run of the rope.

You climb along the via ferratas by clipping the carabiners onto the cable as you move along. Every time you reach a bolt that holds the cable to the rock, you unclip the leading carabiner, clip to the next length of cable, do the same for the next carabiner, and so on. This ensures you’re always protected when you’re alongside a cable.

We clipped in and moved upwards through a wide chimney, the route at this point a steep and hairpinned goat path. The top of the chimney brought us to a sharp-angled grass bowl, and we skirted its perimeter along an airy ridgeline. The cable provided security in most places, but in others it simply ended, and our attention to our foot placements became more intent than before. White strips of clouds scudded by only a few dozen metres above our heads, and hawks circled lazily at our level. 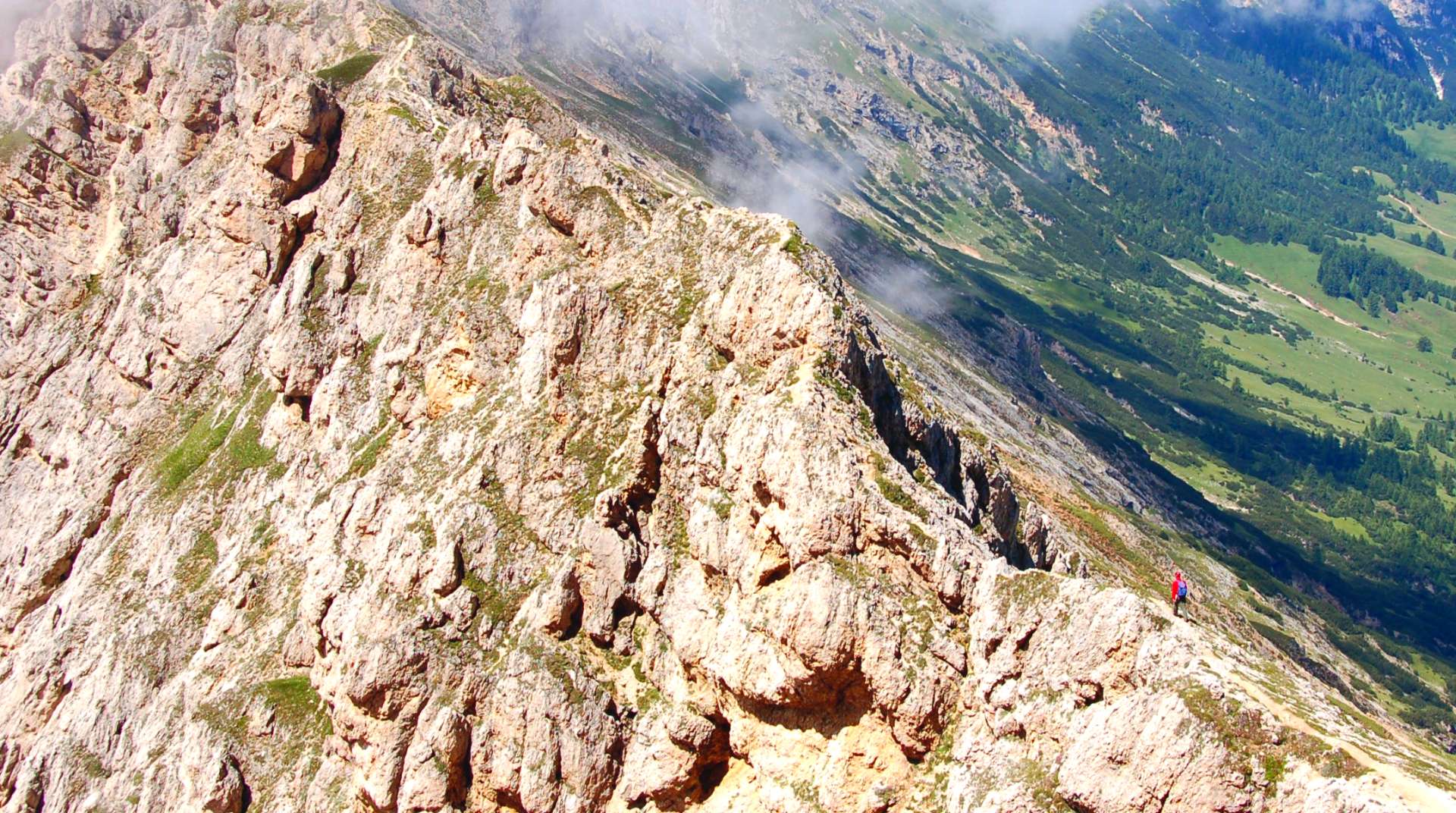 Heading up the Dolomite Mountains of Italy

The route topped out at a natural archway in the rock, the Grand Dente di Terrarossa, which my poor Italian translated to “Big Red Earth Tooth,” or some such thing. Standing in the archway, the view was impressive: alpine grays and browns of the heights merged with streaks of dark green, and blurry greens and yellows of rolling fields across lower foothills. Thin brown lines laced the hills—occasional blurs of dust moving laterally as a farm truck went its way along on some mission or another.

The summit where we stood was a fairly wide space, and we posed for the obligatory photos.  We then moved further down the ridgeline to a steep drop-off. This was well protected by the cable, and we down climbed a vertical face with nice chunky holds. The next pitch was a level path, narrow enough to let only one person negotiate it at a time. Slopes dropped off to either side, and we picked our way slowly along the ridge to a rocky promontory, which stopped us in our tracks.

We knew the route continued ahead, but there was no protection at all at this point, and a misstep would have severely unpleasant consequences. The patches of once-distant fog were suddenly close and visceral, and for the first time on the route I felt the rat claws of anxiety scratching tentatively at my hind-brain.

Behind us was a small pocket in the rock that would keep us somewhat sheltered, a good place to wait out the weather and contemplate future moves. At this point, the entire boot of Italy was at our backs, and when the mists cleared, we’d have a soldier’s view of Austria.