Getting into Italy’s Germanic Christmas Spirit

One of our Christmas classics: Getting into the Krampus Spirit! In summertime, northern Italy blooms with green grapes and cross-country cyclists. But in the winter, the region’s Germanic spirit comes alive.

Fireballs erupt in the pitch-black night. Sparks rocket skyward in rows of five. The caravan in front of us begins to shake, and a battalion of horned demons immediately rush toward us, rattling the metal barriers and grabbing at young girls’ hair. The girls scream, but I can’t hear them, because the heavy metal that’s blasting from surrounding speakers drowns out their laughs and cries.

This is a Krampus parade, a Germanic ode to the demon who snatches up naughty children during Christmastime. He is, essentially, a foil to Santa Claus, so terrifying that Austria’s 1920s Christian government banned him for decades. Not anymore. All around us, men and women dressed in Krampus costumes parade among snow-capped Alpine mountains. The temperature has just passed sub-zero. Inside nearby chalets, spectators cup their hands around pints of lager. Everyone here speaks German.

Except we’re not in Germany — nor Austria, nor Switzerland. We’re in South Tyrol, Italy’s northernmost province. Cleaner and more expensive than the rustic south, northern Italians are likelier to walk around sporting colourful, lightweight down jackets and stretchy ski pants. They are mostly bilingual, like their signage. If you didn’t know you were in Italy, you wouldn’t guess it. 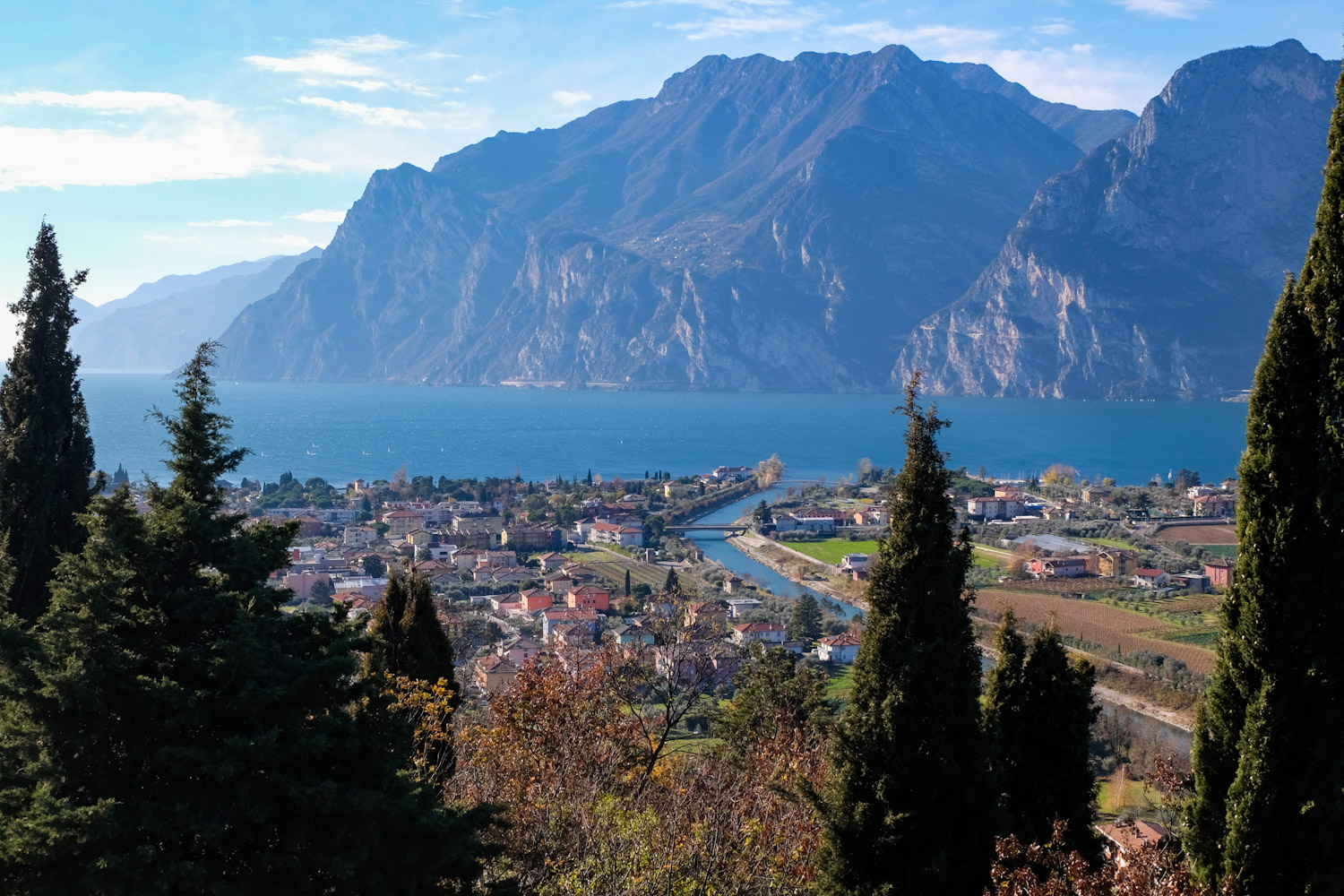 While an unconventional December destination for Canadians, northern Italy is beautiful in its touristic off-season. During the summer months, sleek cyclists sporting thousands of euros in gear swarm these parts, zooming along smooth riverside paths and stopping, perhaps, to take in the panoramic mountain views. In the valley fields below, millions of bright green grapes burst into bloom, shaded by towering foliage set on craggy cliffs.

In December, there’s none of that. The grape vines lay dead and bare for the season, twisting around their dry wooden cross-beams, and most of the mountains’ autumnal leaves fell off weeks ago. But there are fewer tourists, too, and the crisp mountain air is refreshing in the warm sunlight. 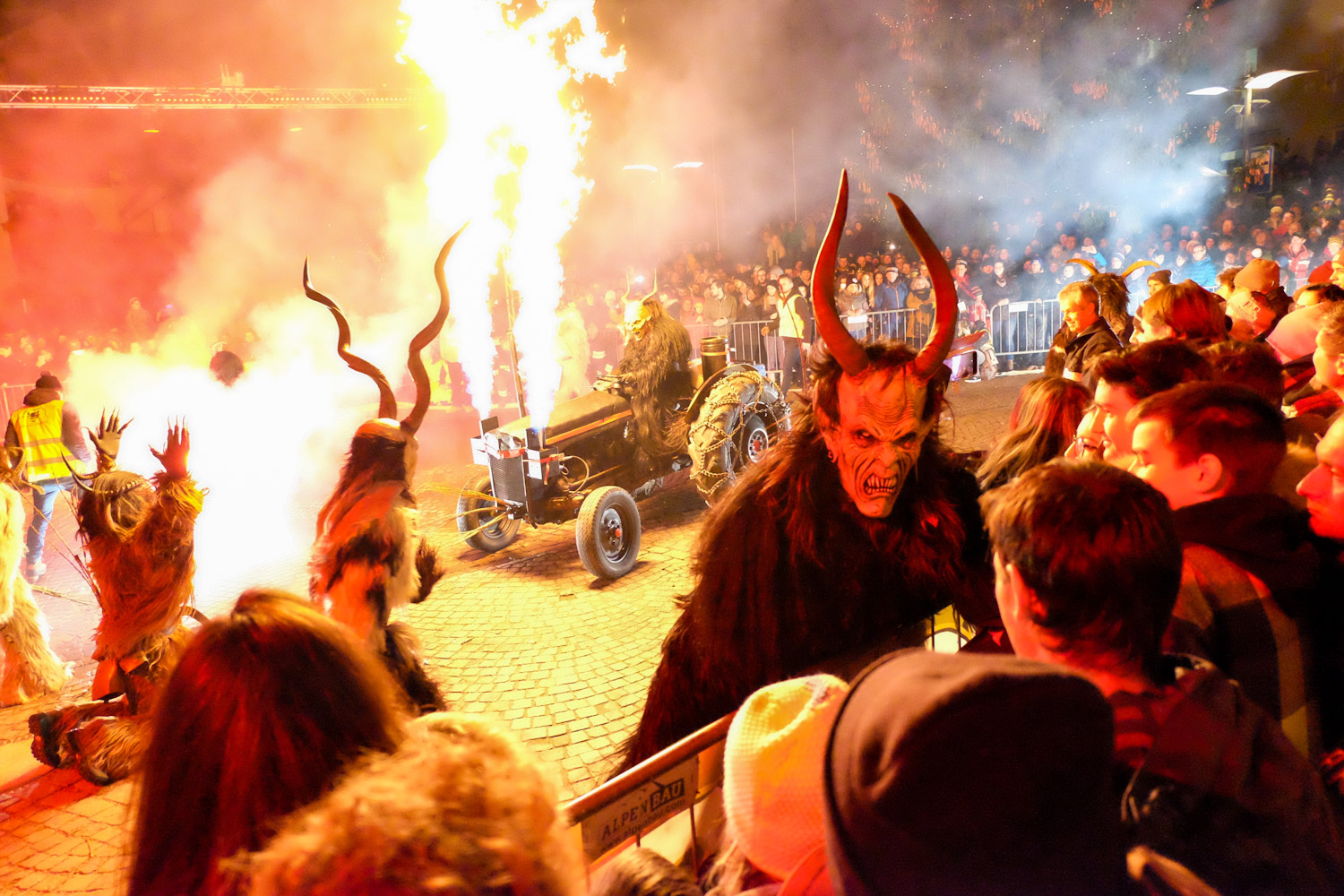 At the Krampus Parade in Natz, Italy.

Plus, there are Krampus parades. Our hosts here, Angeliki and Dario (a longtime Outpost columnist), drove us two hours from their home in Rovereto to see the parade in Natz, which is apparently one of the smaller parades in the region, though the crowds here are nonetheless enormous. Krampus groups travel from across Europe to perform at these events, bearing their flags and showcasing their costumes — a bizarro version of a typically corporate-sponsored Santa Claus parade.

The whole event lasts two hours, and afterwards, our toes are frigid from stillness. Breaking from the hordes of teenagers, we opt not to stay for the techno dance after-party in the town square, and instead head for our car, which Dario parked somewhere in a field we can’t immediately recall.

Another anomaly of northern Italy? Its food schedule. Unlike in Rome, where many restaurants won’t even open until 7 p.m., most here close by 10. We drive for an hour to find one that’s open — Viktor Imbiss, a large roadside stop with simple, cheap, typical dishes. We order breaded zucchini, an enormous schnitzel, potato fries, a bloody steak, buttery polenta and sausage with curry sauce. For 33 euros, the four-person feast is a steal. 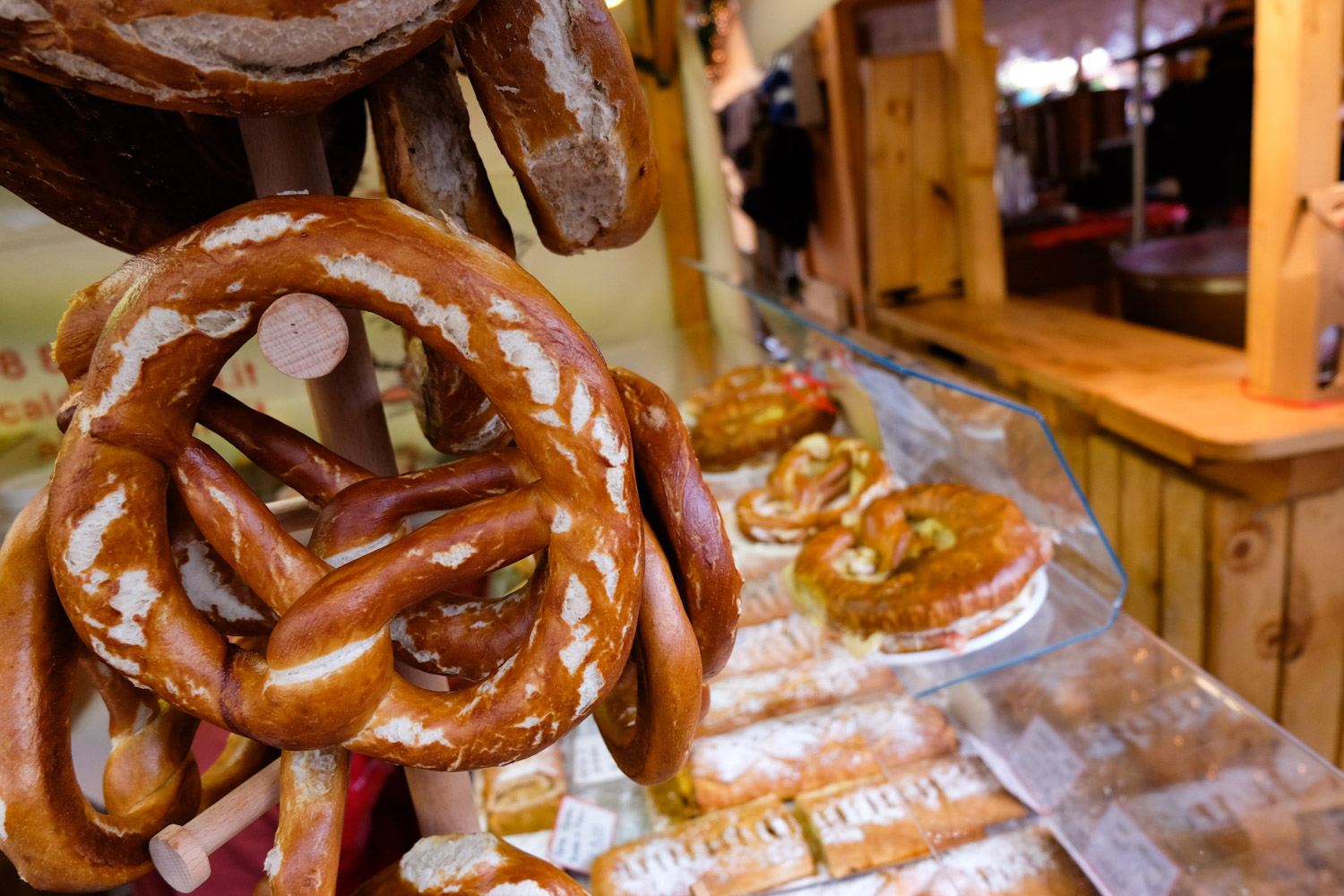 Northern Italy’s Christmas markets transport you outside of Italy.

The next day, we head out to Lake Garda, where Dario and Angeliki take most of their guests. My wife, Vee, and I quickly understand why. Stopping en route for an aerial view of the small town, Riva, the soothing blue water and charming town are flanked on all sides by dramatic mountains dotted by medieval castles and quiet churches.

Riva is as old as the Roman Empire — older, even, though you won’t find traces of that in its tourism signage. The stone ruins of excavated Roman baths lie near the town centre, near 11th-century churches and Venetian-built apartments. Strolling along Lake Garda, the largest lake in Italy, we pass quacking ducks wading in clear water and a Christmas market selling hot mulled wine, giant pretzels and locally produced olive oil.

But Dario and Angeliki don’t want to stop at this market. There’s a better one 20 minutes away, they say, in Arco, a town marked by an imposing 11th-century castle built precariously onto a jagged spur. There we buy focaccia with tomatoes, a doughy pretzel (alas, cold and a little stale) and some hot wine so spiced that inhaling the fumes throws us into coughing fits.

That evening, after returning to Rovereto, Vee and I take a walk to explore the downtown core, comprising mostly cobbled pedestrian alleys, cafes and gift shops. With fewer than 40,000 people, Rovereto is one of the largest cities of the province, but it holds onto a small-town feeling, with sprawling low-rise apartments built behind concrete gates and roads wide enough for clearly marked bike lanes. There are barely any Vespas here, those hallmarks of Roman life. 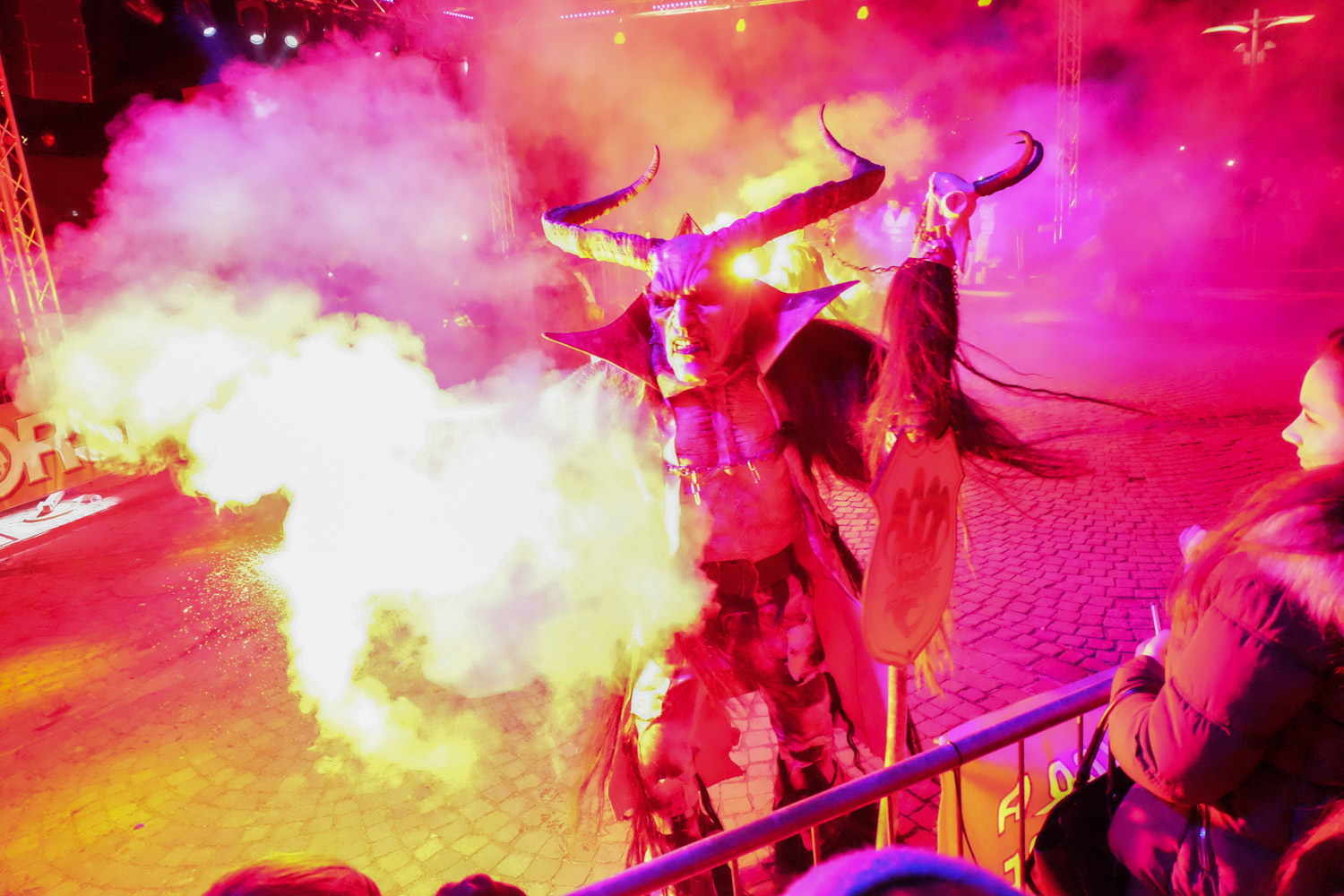 No shortage of fire to warm up the crowds at Natz’s Krampus parade.

We cross the Torrente Leno canal and enter the downtown, which is where we find our third Christmas market of the day, the best and biggest yet: tents reach in all directions with vats of hot chocolate, nutty bars of turrone, woolly scarves and giant strudels packed with sweet apples. The sun sets early in late fall, just before 5 o’clock, igniting the star-like Christmas lights dangling over every downtown street.

Yes, it was colder and windier than we would’ve liked for a vacation. If you’re looking for a winter getaway, northern Italy is an odd choice. But while we were glad to move farther south the next day, I was also a little sad to leave this quiet part of the world, where even in the bitter cold of night, you can warm yourself with a cup of hot wine, a hearty bowl of soup, or a 10-foot-high fireball at a Krampus parade. ♦

I Dare Ya! Backcountry Winter Camping in Algonquin Provincial Park