It’s a Wide, Wide Elephants World at the Sanctuary in Thailand

In Thailand, there’s the best place to find — and not to find! — these most spectacular of animals.

Elephant washing, elephant walking, elephant trinkets, elephant pants, and my all-time favourite — elephant-poo paper!  Everywhere you look in Thailand, elephant-something is an option. Thailand’s history is as intertwined with the elephant as horses are to the American West. But buyer beware — as well as animal lovers and anyone with a fully functioning soul — elephant trekking is rife with malpractice. 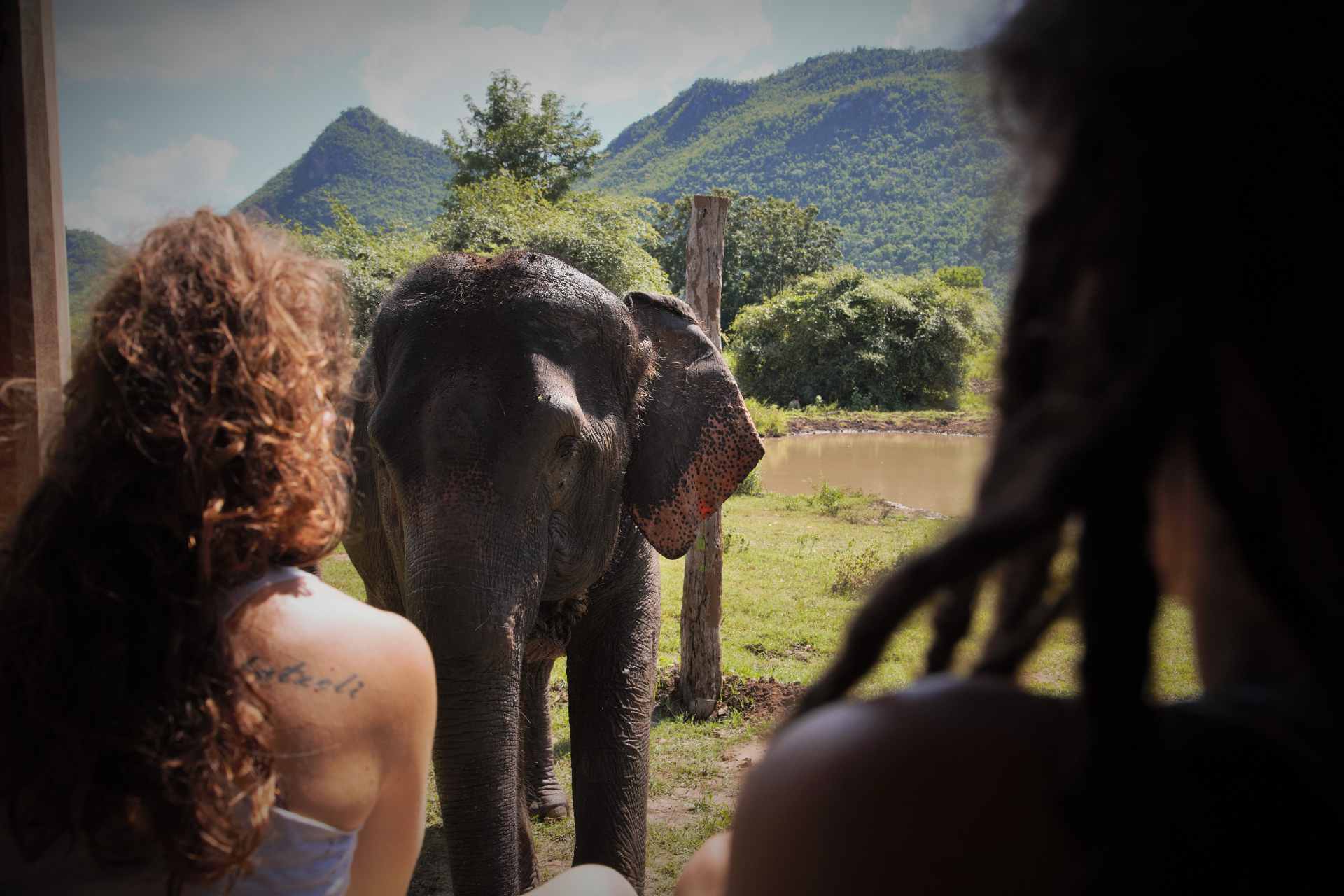 Armed with an arsenal of cautionary tales about how elephants are treated everywhere on this planet, Lena and Sue bring a healthy skepticism to the experience. 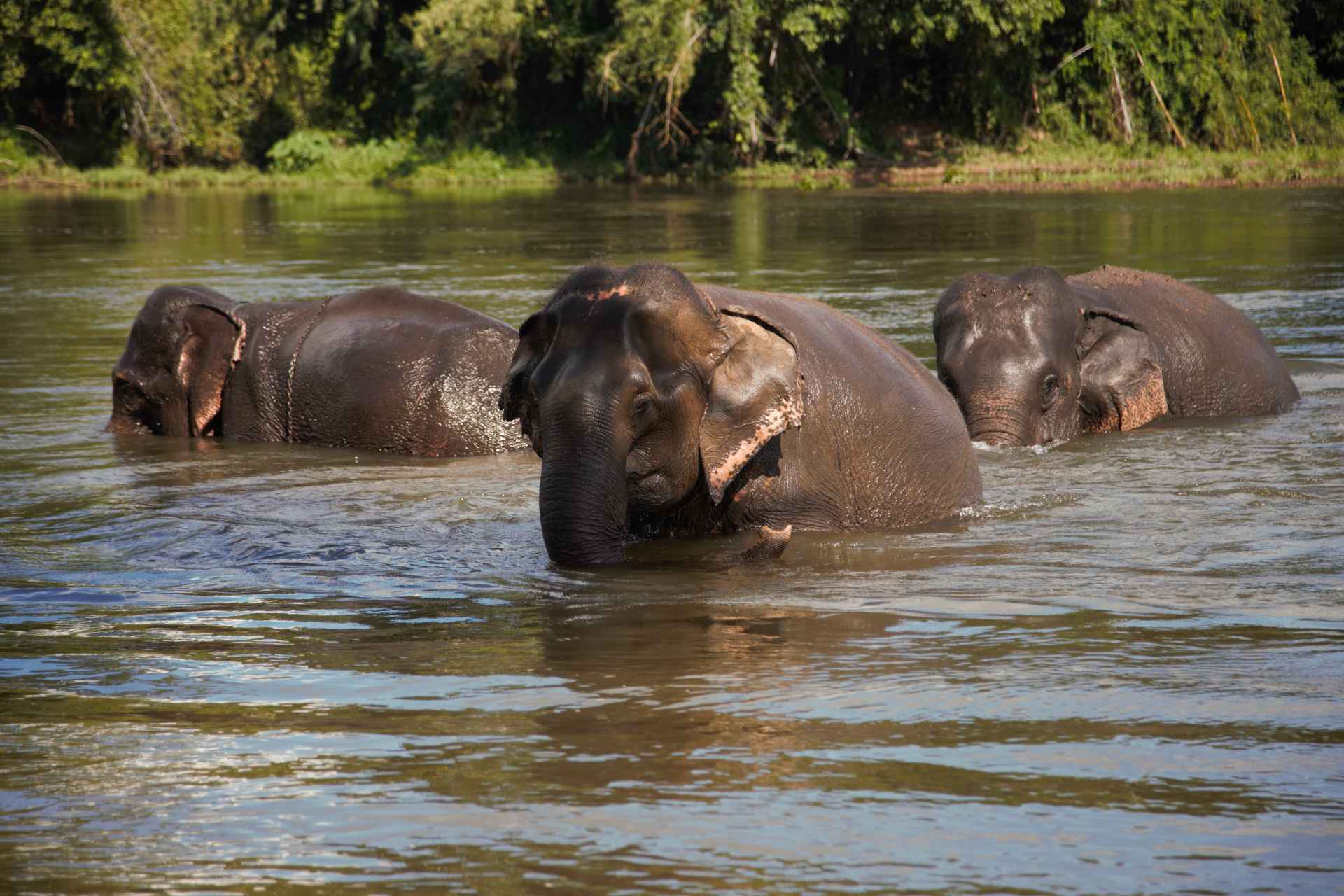 But at the sanctuary elephants are deeply revered and protected. 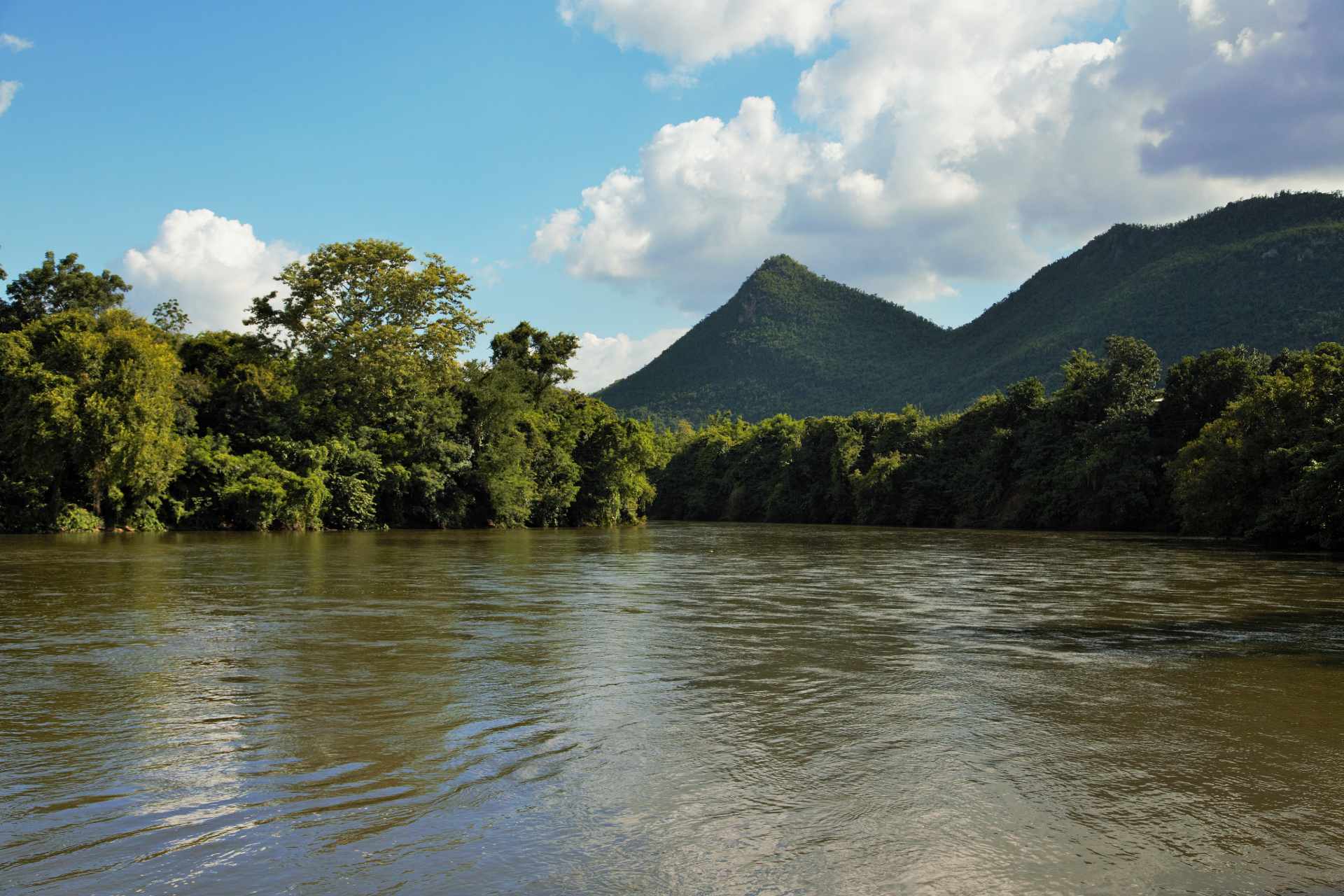 The water, surrounding hills, meadows and wilderness makes a good environment for elephants, and helps retrain them for the wild. 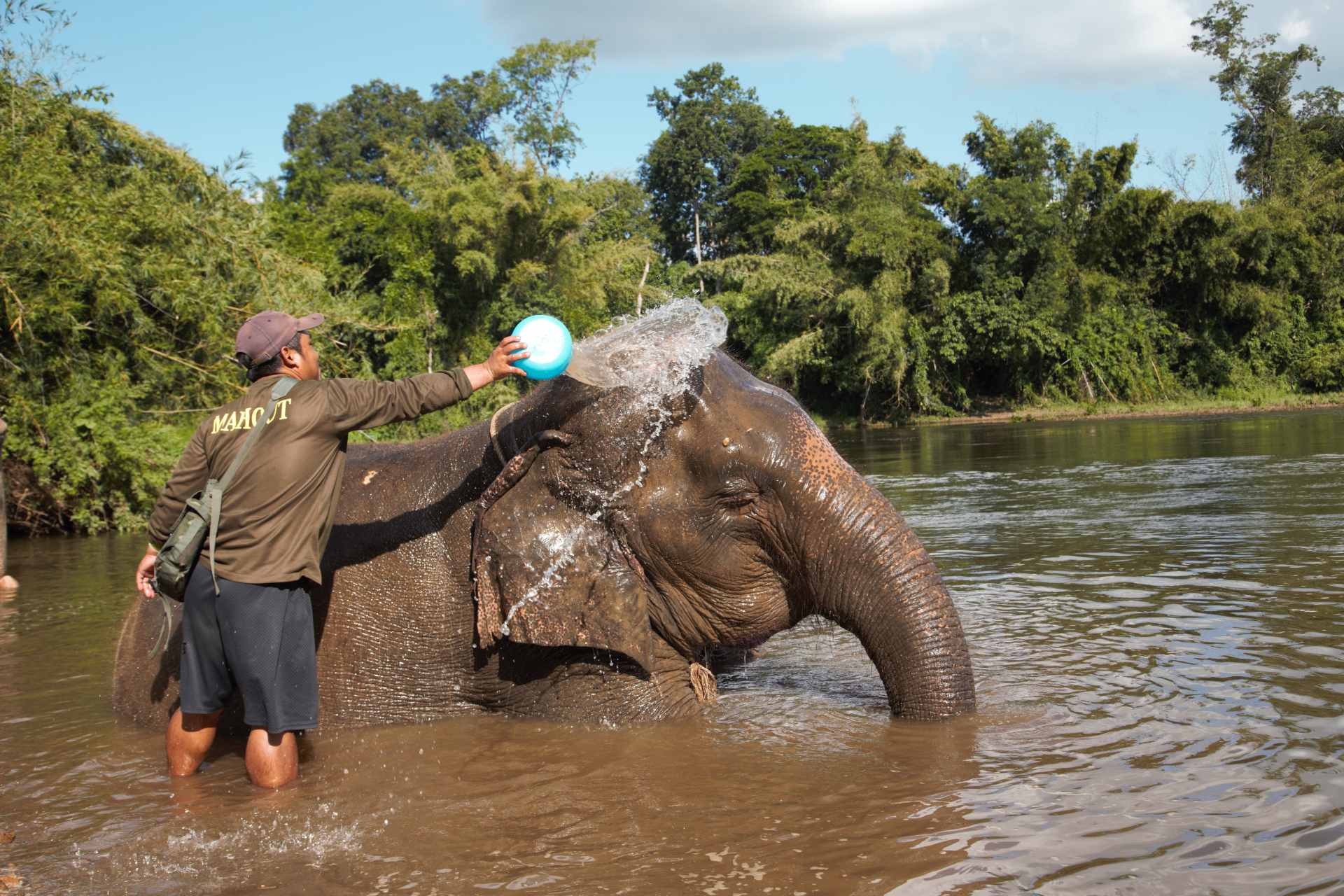 Here, as in the wild, elephants always find and gather at a water source, both for rehydration (they must drink at least once a day), and to cool off.

Complete with abundant waterholes, customized diets, an onsite veterinarian and an attentive, fully dedicated staff, ElephantsWorld in Kanchanaburi  is equipped with both the supplies and heart to usher these tired deep feeling creatures into greener, lusher, relaxed pastures. The site can only be better described as a luxury rehabilitation, elephant-retirement resort. 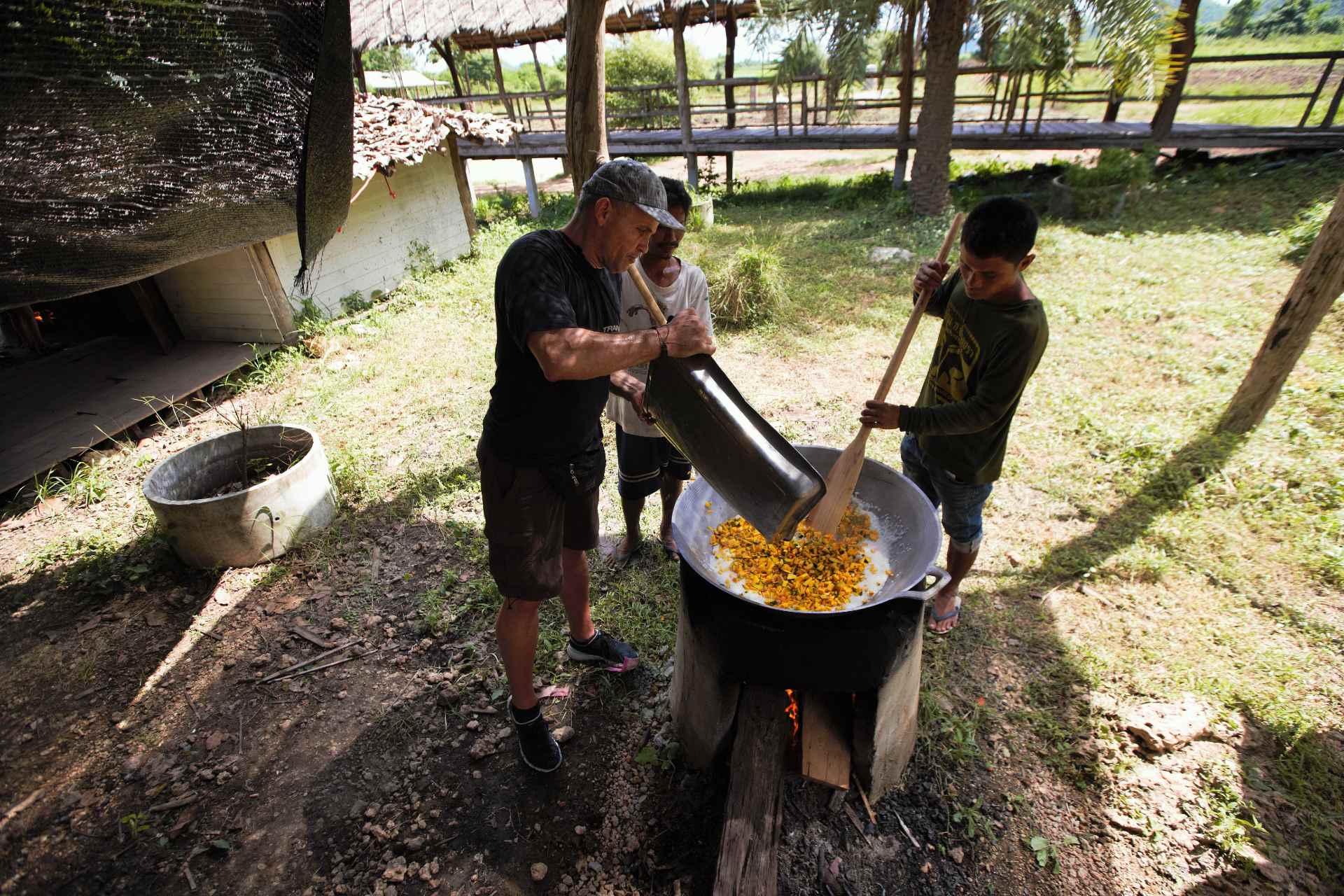 Staff adding the ingredients for an upcoming elephant meal. 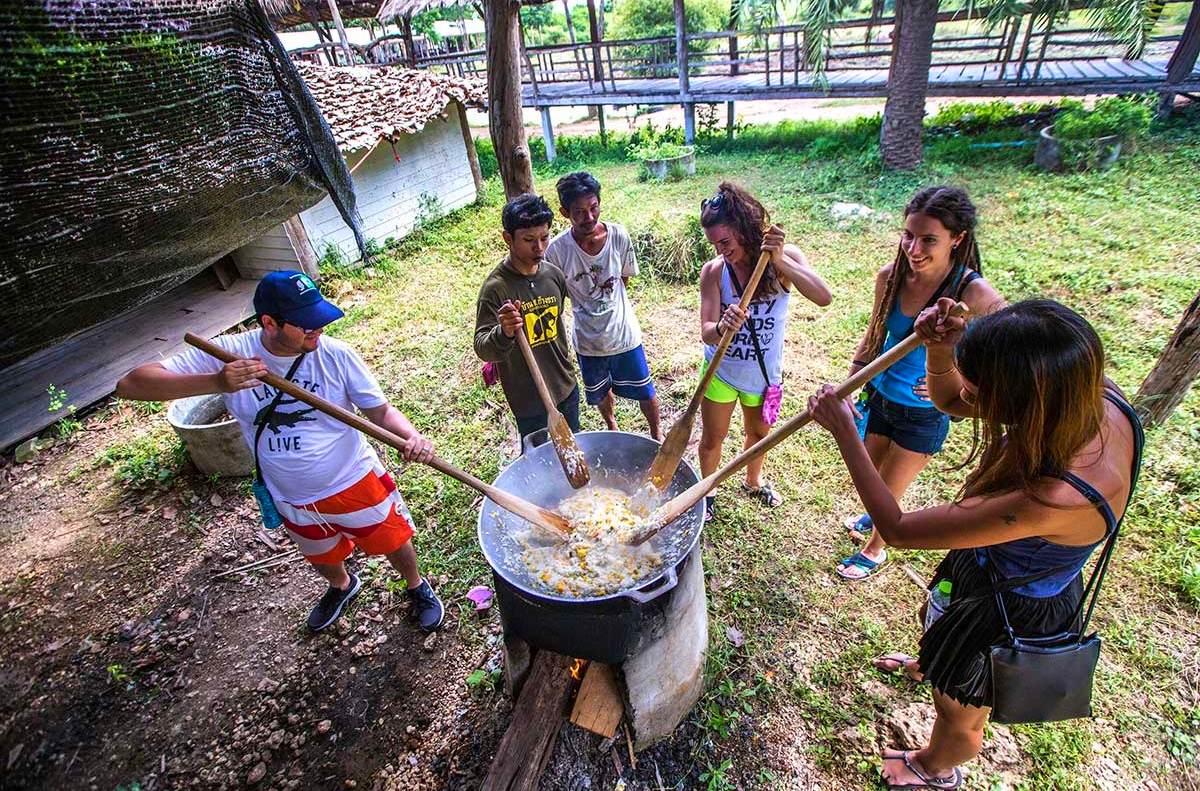 As a volunteer for the afternoon at the sanctuary, you will prepare elephant meals (sometimes rice, sometimes rolled pumpkin balls) with other volunteers, and them get to feed them. 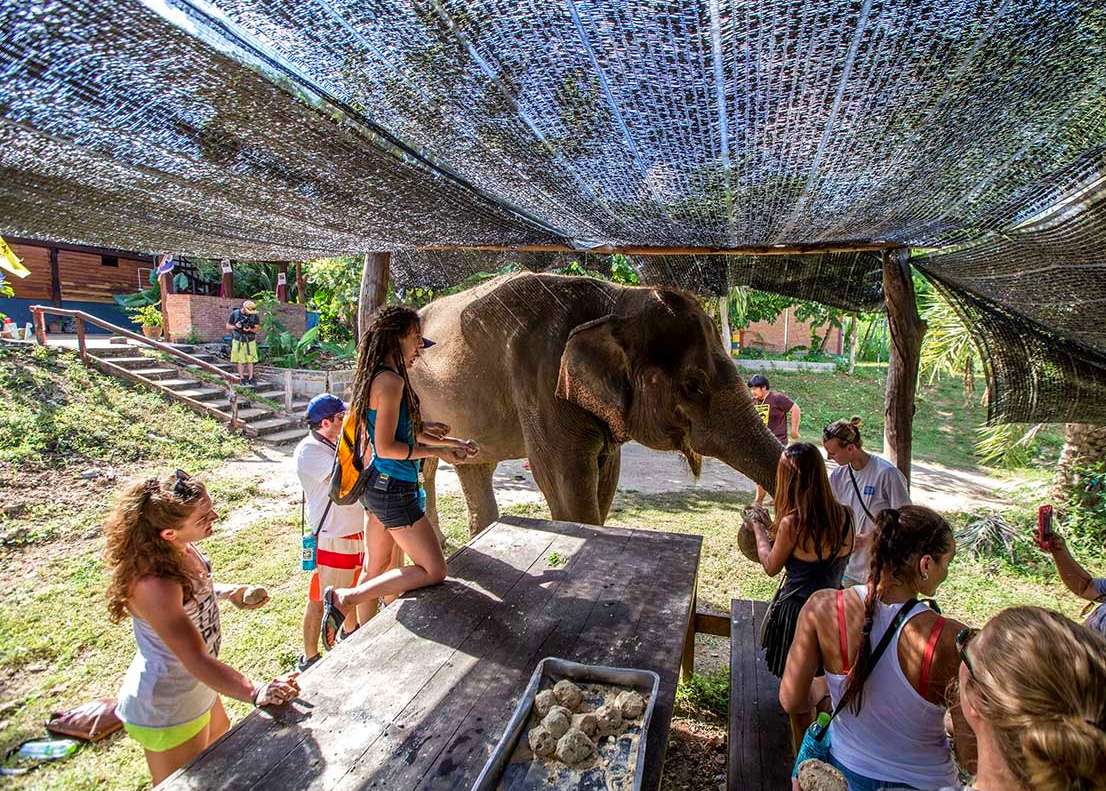 Elephants typically need about 10 percent of their body weight in food every day. 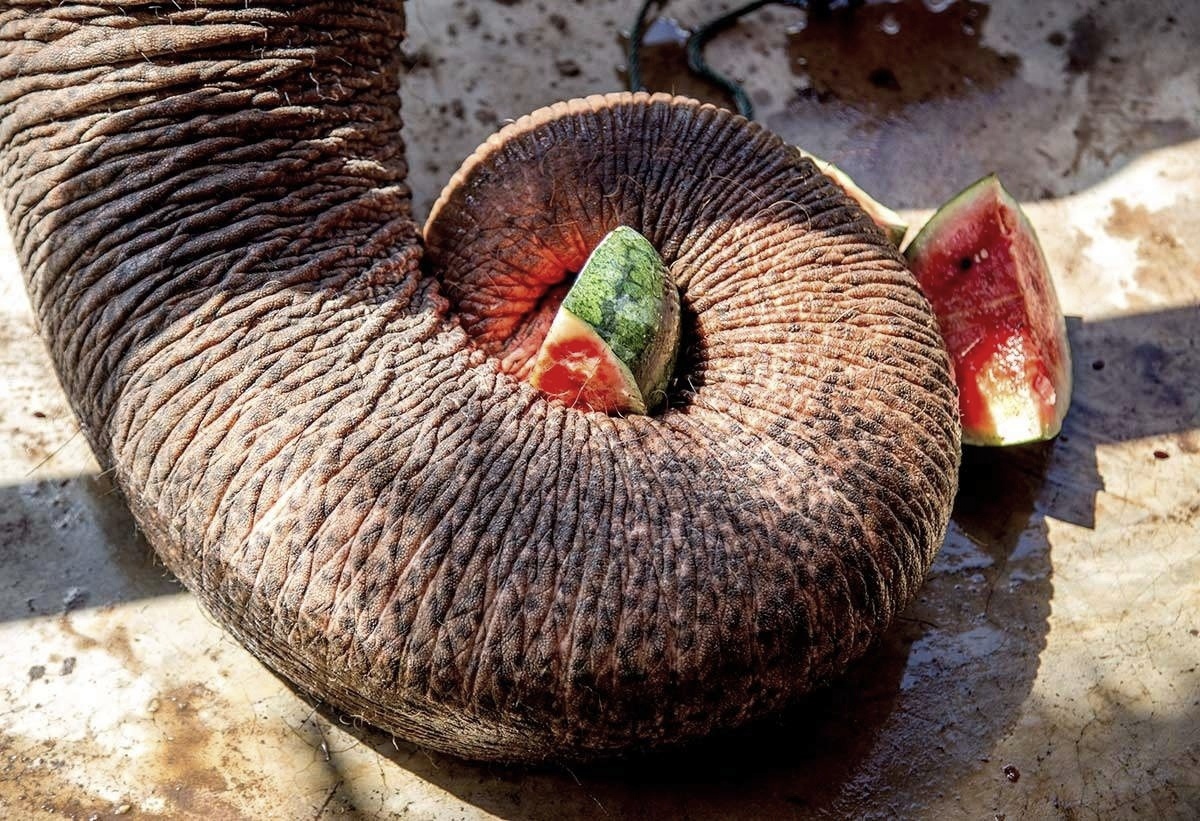 Who knew elephants love watermelon? Just one of the many things we discovered about these animals at the sanctuary.

As we prepared the elephants’ morning meal, I learned that elephants — who run this tiny kingdom within a kingdom — have come from trekking camps, defunct logging operations and street begging. While elephant captivity for the purposes of logging was banned in 1989 in Thailand, many trekking operations still use elephants to herd tourists through the jungle, often atop their backs in metal cages — though admittedly, this is now a controversial and even dying activity within the legit adventure-travel industry and community.

[As it turns out, rescued and domesticated elephants can, remarkably, quite possibly be reintroduced to the wild and survive, unlike other species. Though there’s a way to go, over the past two decades in Thailand, many conservation efforts have been made to save elephants and/or to get them back to their natural habitat, including finally banning the trade in all elephant ivory in 2015, after both global and domestic activism. Here’s a recent story of a whole herd of elephants being rewilded from domesticity in the U.K. to their natural habitat in Kenya!] 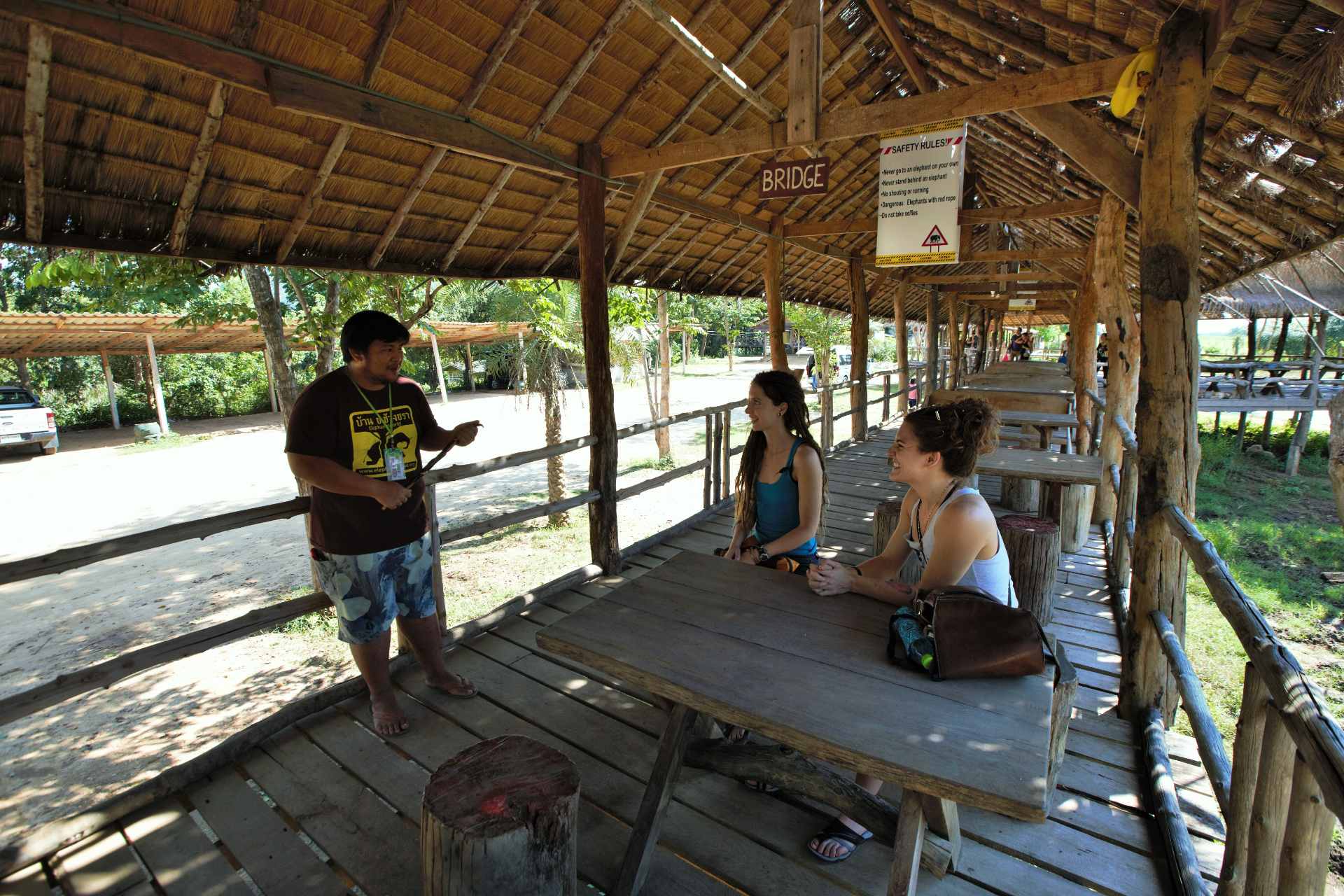 At the sanctuary, we learn that the elephants were rescued from tour operators, often used for jungle treks, defunct logging operations (where they were used to haul logs out of the forest), and even “street begging,” where private owners used them as props to solicit money. 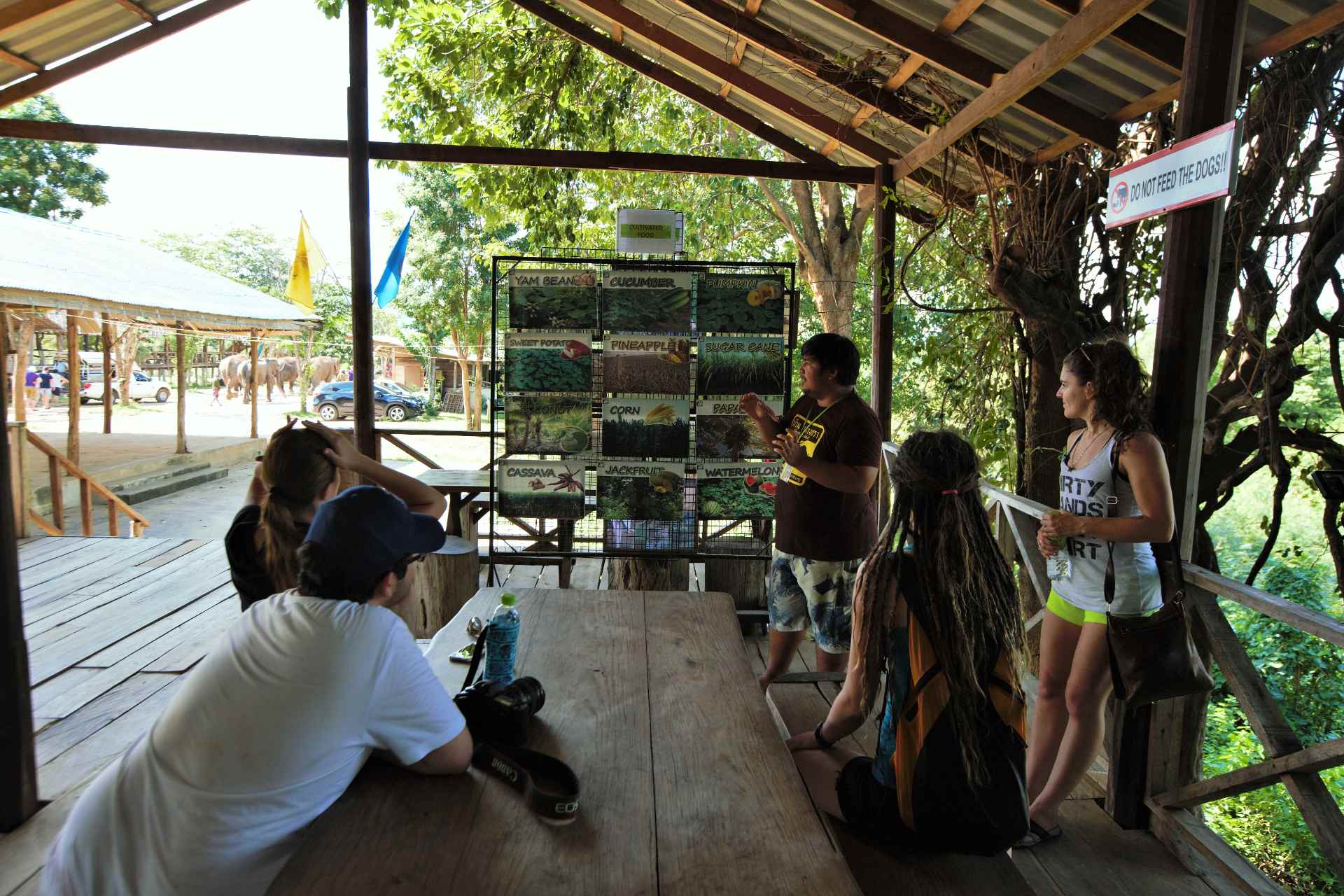 We also learn that the elephants often end up at the sanctuary as sick, fragile, abused or malnourished.

Before adding human weight, these platforms place upwards of 50 kilograms on the most sensitive part of an elephant’s skeleton: their spine. And working approximately 10 hours a day, even despite the best of efforts it’s hard to sustain an elephant’s dietary demands: they require 10 percent of their body weight in nutrition per day. So often elephants are malnourished, mistreated and in dire need of rest when they pass through the doors of ElephantsWorld.

As we dished out watermelons I spoke with one of the caretakers, a repeat volunteer, who told me that at ElephantsWorld “it’s the humans who work for the elephants.” Indeed, later that day we would hand make very large pumpkin-rice balls rolled in protein powder, and help stock baskets of various vegetables and fruits that were divided by name and dietary restriction. 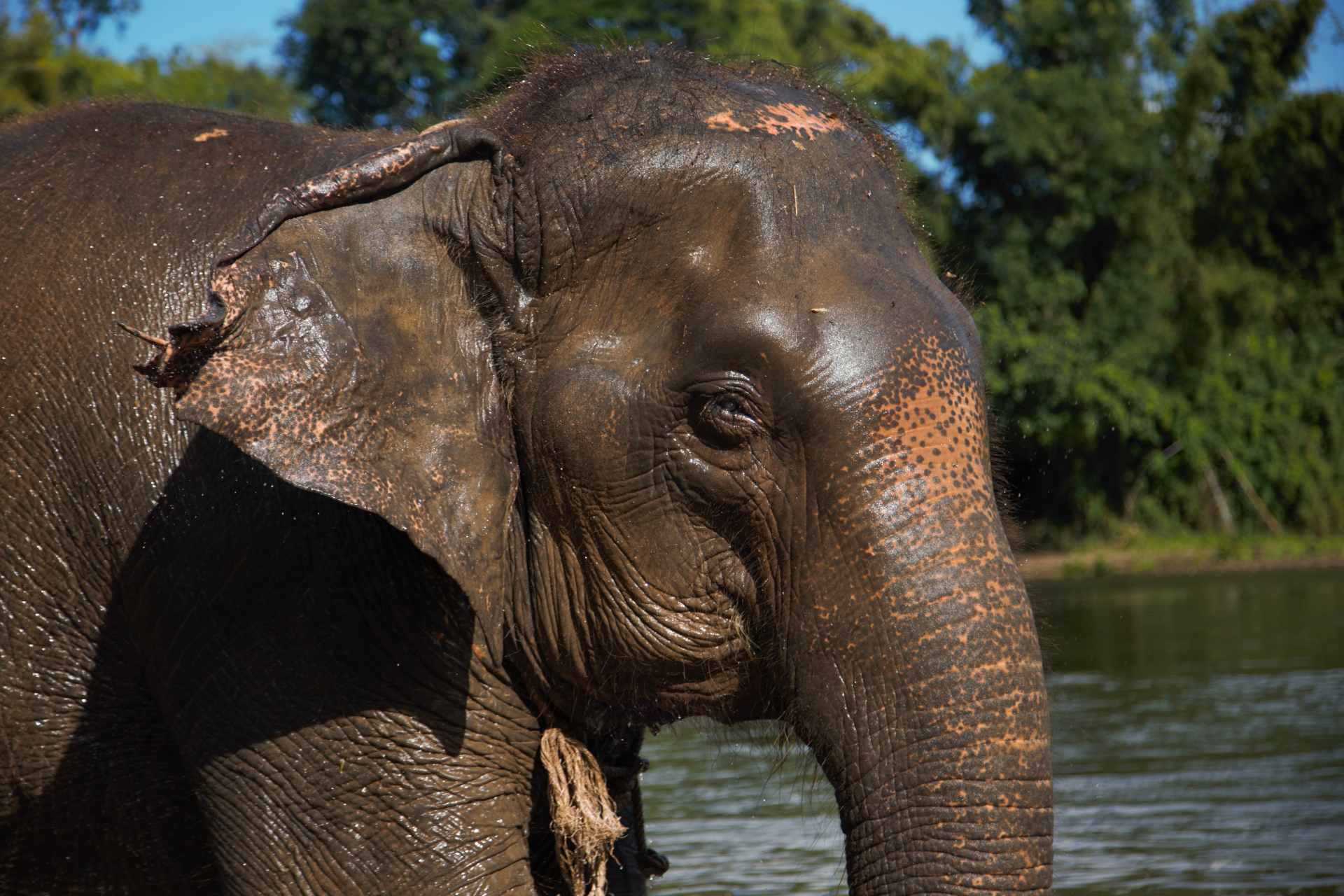 Elephants are highly intelligent, sociable, and sophisticated animals. Like humans, they have some “self-awareness” (the ability to recognize themselves), travel in herds that are like families, and are even known to perform burial rituals for their dead. 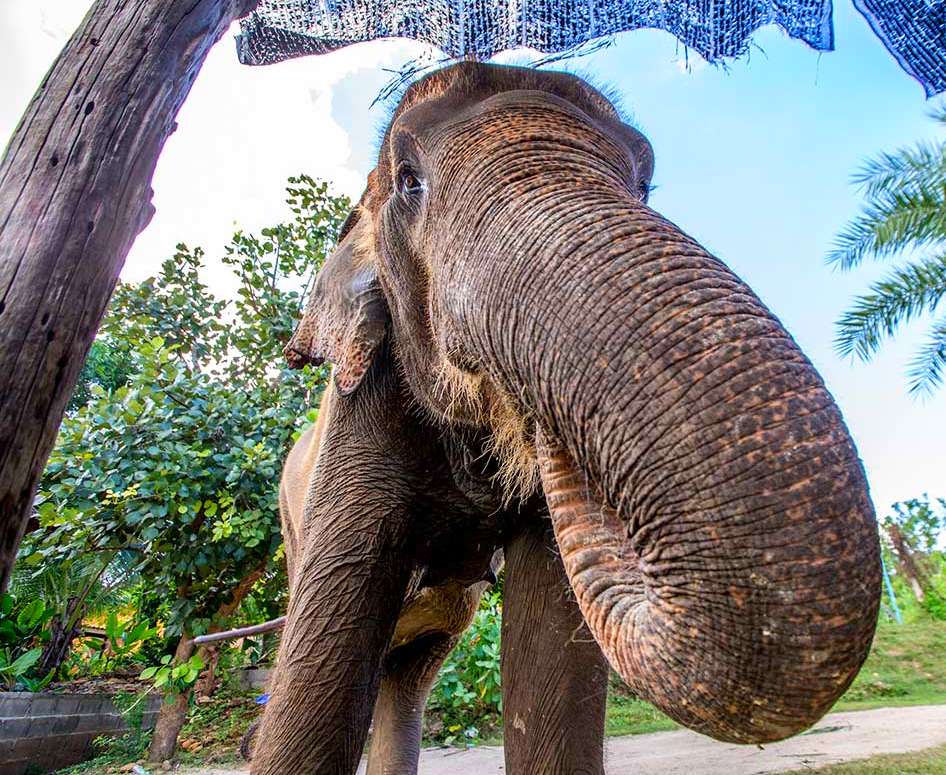 Like us, the volunteers we spoke to were awestruck with the work being done at ElephantsWorld, and enjoyed the experience of participating — but one also warned me that “when you see the new girl, you’ll know.” Later, we did see her. As I scrubbed a baby elephant — who like a Great Dane moonlighting as a lap dog flip-flopped in the lake, his crushing size unbeknownst to him — a mahout (elephant trainer) was guiding a timid lone “lady” to a more peaceful part of the waterhole. **

“There she is,” said the volunteer, following my gaze. She was unmistakeable. The skin draped off her hulking frame like an aged leather jacket on a coat hanger. “We’ll turn her around soon. She is already markedly better than she was,” my new friend told me. “This is my third time here. The most gratifying thing is returning to see the elephants you’ve bonded with happy and healthy again.” 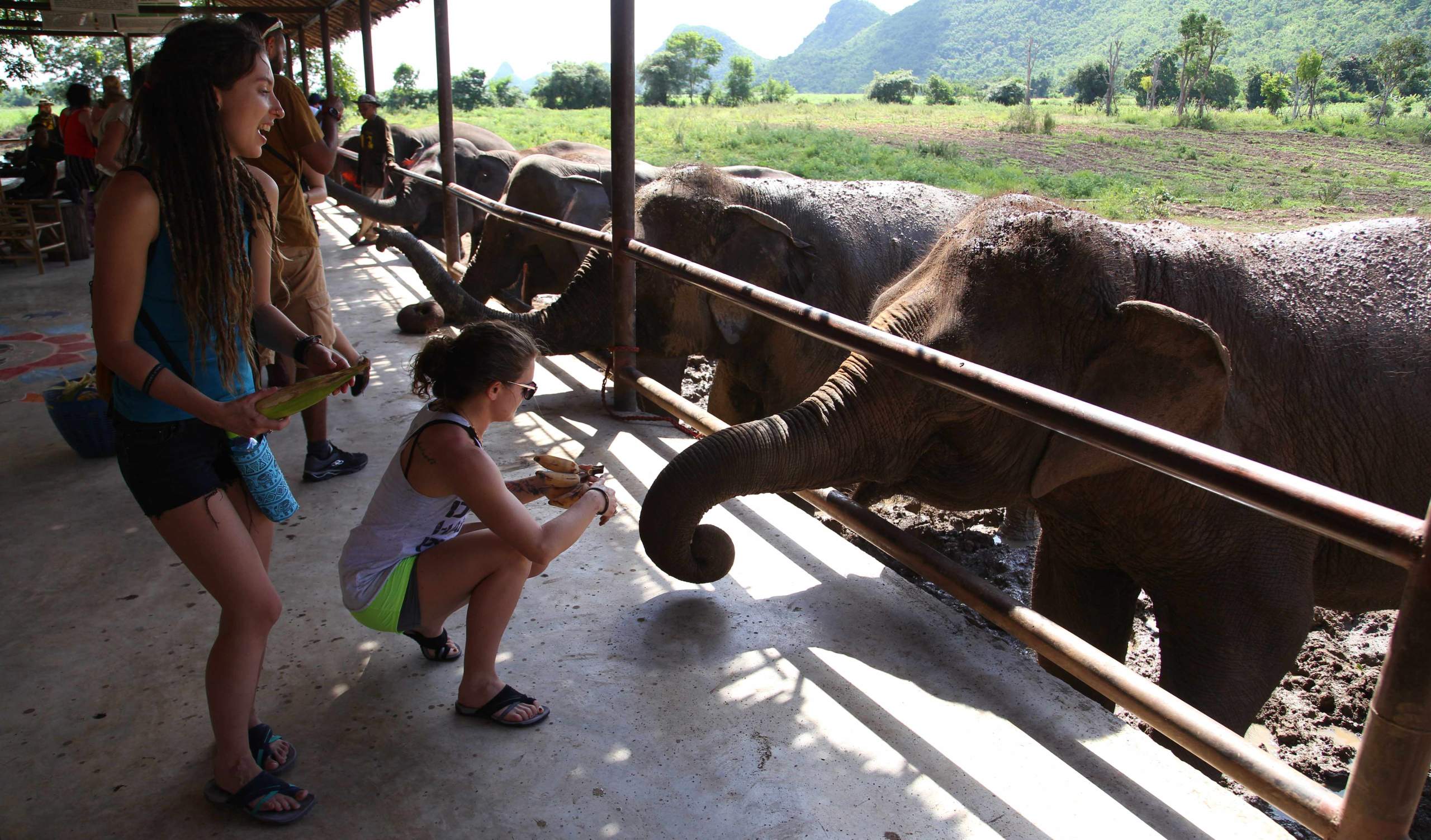 Lena bends down to feed an elephant. 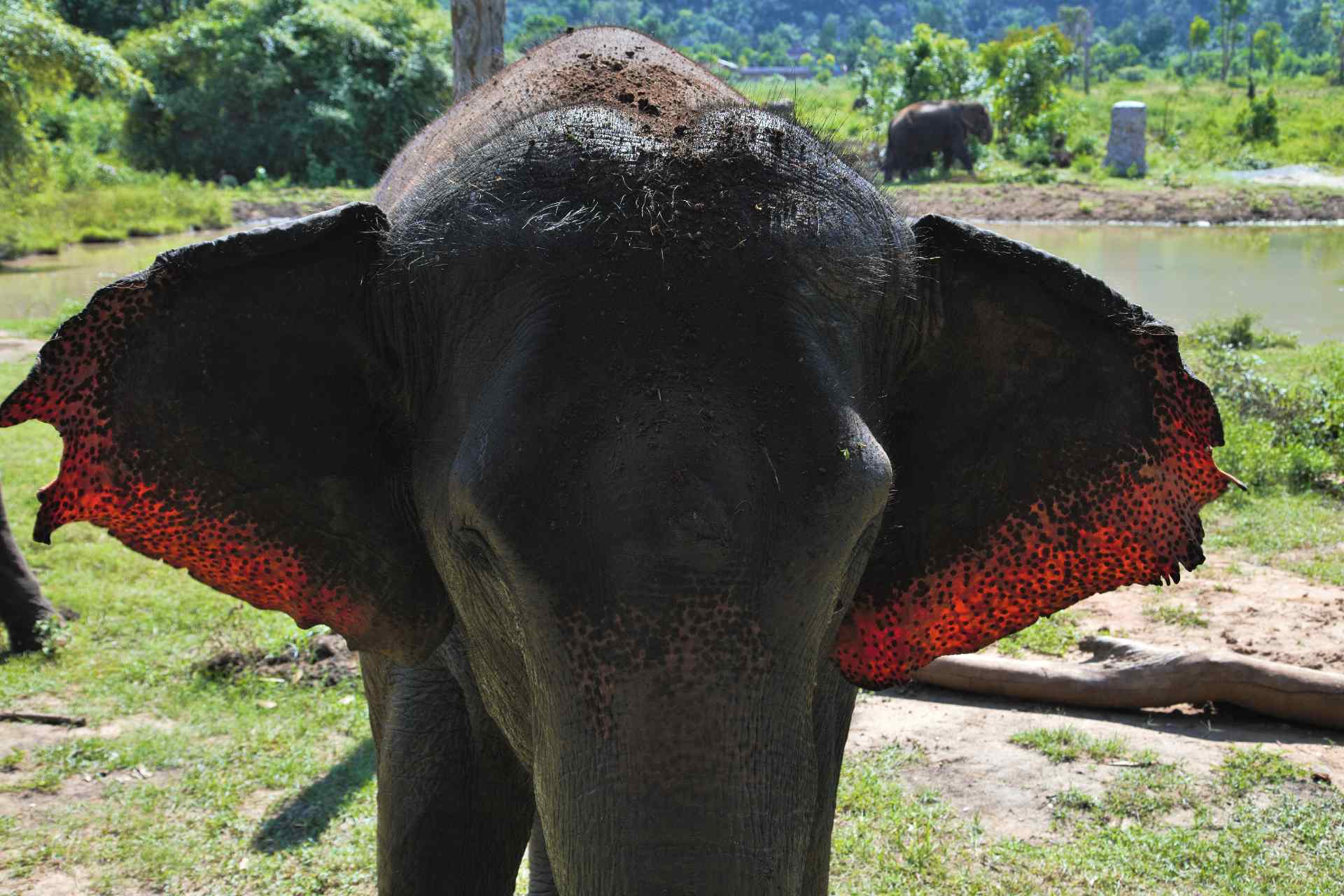 Is the elephant looking us straight in the eye, which they are known to do, almost as if they’re intellectually curious about us humans? 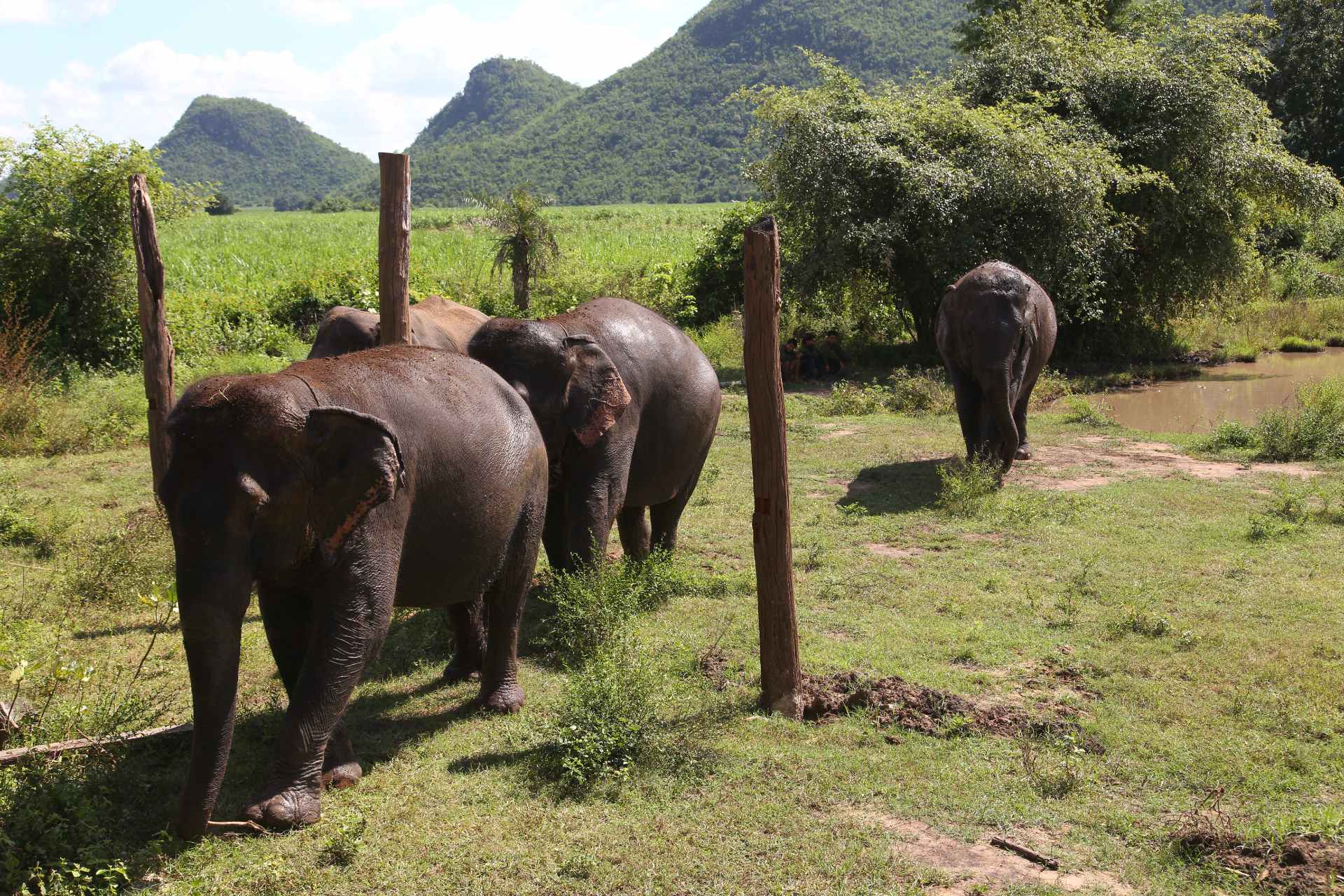 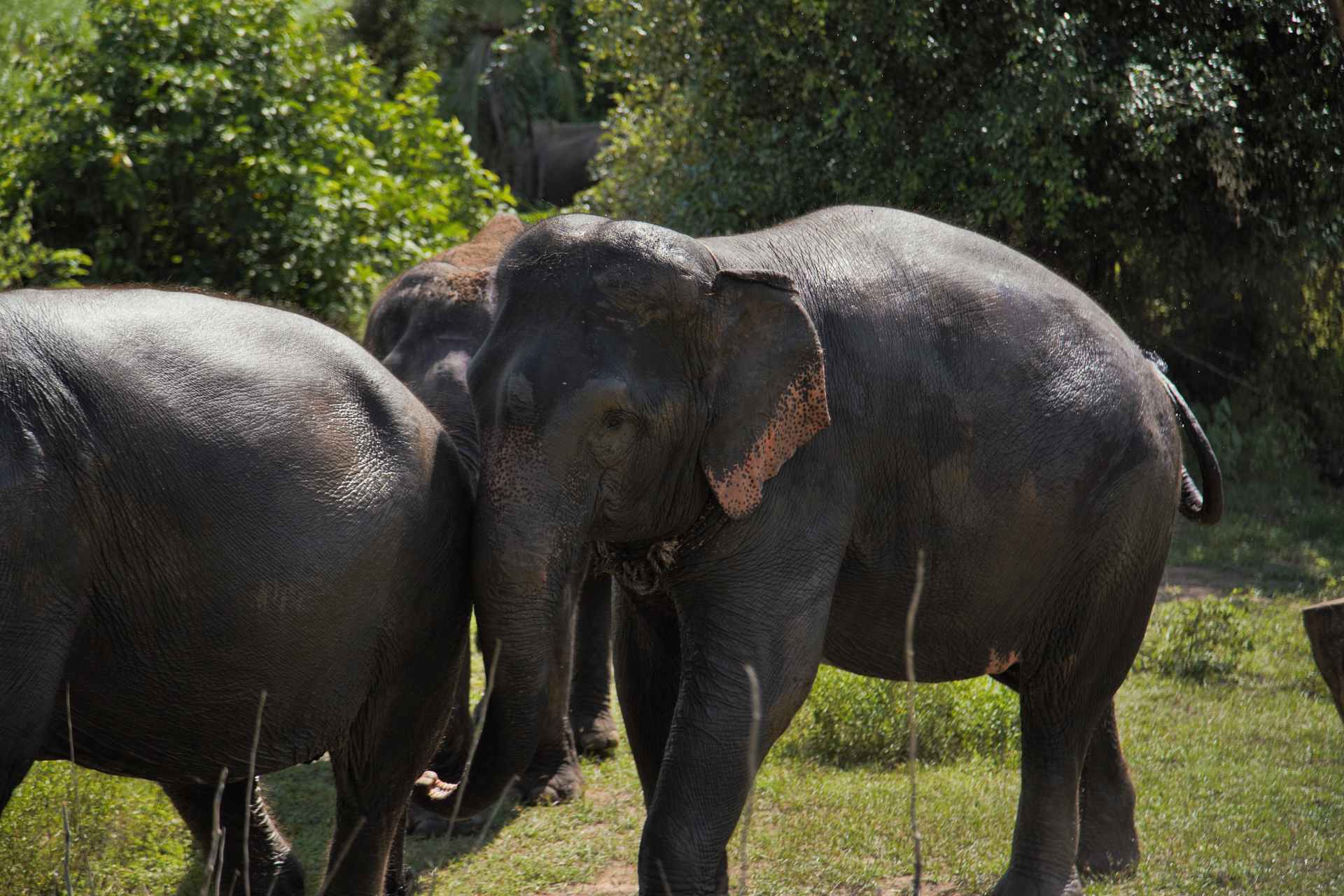 My heart sunk as I thought how this creature who weighs some three tonnes could seem as delicate as a piece of straw. But just then a particularly plump elephant strolled onto the shore — she wasn’t chubby or over fed. She was pregnant.

Elephants are highly complex creatures. From a care standpoint, they devour resources. They have choosey sweet teeth — the phrase “champagne tastes on beer wages” comes to mind — and even more fickle stomachs. From a social standpoint, they are even sophisticated. Adoptive mothers care for orphaned young, and entire herds will perform burial rituals and mourn their dead, even coming back to the resting place of their deceased to grieve.

They say an elephant never forgets. At ElephantsWorld we learned how imperative it is that as travellers, it’s our great responsibility to remember we are not the only creatures on this planet that feel.

* With files from Outpost staff.

** Please note, updated: many international animal/elephant conservationists define a true animal sanctuary as a place that is as close to an animal’s natural habitat as possible, with enough space so they can roam freely, and especially, a place that does NOT allow any human contact with any wild animals, including elephants, and including helping with bathing or being in the water with them.

Mulberry Magic: Life on a Den Chai Farm, Where We Eat Some Jam and Bread

Our Thai-Dye Adventure: It’s a Colourful Day in Phrae!