Entering Laayoune at night, we couldn’t have known the city had been on fire. In the wilted glow of tired street lights, that evening in November 2010, there was no evidence that buildings had burned, knives had been bloodied and emotions had raged.

Story and Photos by Joey Anchondo

The only hint of tension in the largest city of the Western Sahara—a disputed territory under Moroccan control—was the jittery way the gendarmes analyzed our documents with a suspicion we had not previously experienced. Pointed questions in Arabic were wielded towards Boubacar, the man who had picked us up hitchhiking earlier that day, and then redirected to Jonathan and I in French, a cross-examination using the barrier of language rather than rooms.

We explained repeatedly why we didn’t have our passports, insisting that the photocopies we had were sufficient for travel. Our passports were in the care of Susan, our Czech companion who had drawn the short straw. She was hitchhiking in the opposite direction, back to the Moroccan capital, to procure new Mauritanian visas for all of us. Our previous visas had expired before we ever made it to Mauritania—mostly because of a complicated story involving an ill-advised donkey-cart investment and subsequent sluggish trek through the desert.

When we came to Morocco, we had expected to travel directly to Mauritania and onward to the explore the rest of West Africa, but when you travel without any goals or time restrictions, it is easy to get distracted by bad ideas. As easily as I understood the situation, our circumstances were a challenge to explain. 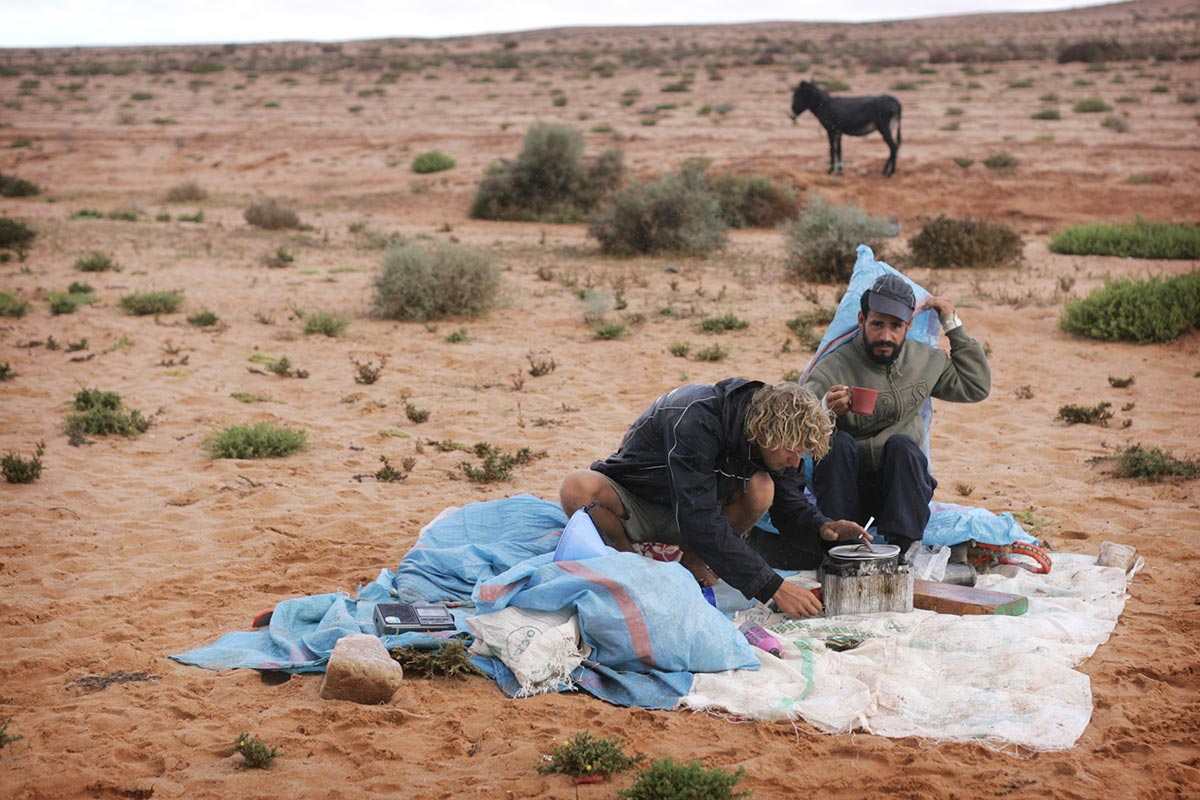 Jonathan waking up in Tan Tan, in southern Morocco.

Jonathan waking up in Tan Tan, in southern Morocco.Ten sweaty minutes later, the gendarmes allowed us to proceed into the city. I apologized to Boubacar, a cherubic young doctor with a penchant for high-grade hashish. Rumour had it that, because of the recent riots in Laayoune, all foreigners had been kicked out of the city, and foreign press was prevented from entering.

Boubacar ensured us that we needn’t worry. He wasn’t well connected, but he wasn’t nobody, either. As an ethnic Sahrawi in a glimmering midnight-blue boubou, I wondered if the Moroccan authorities would regard him with suspicion, especially considering his two foreign friends with dubious back stories.

“Dude, what’s going on?” I said to Jonathan, realizing something was wrong with our situation.

“It’s nothing, they can’t do anything to us,” he said, doing his usual bit to shame me for even hinting at fear.

I braced myself for the inevitable frisking and possible detention. I knew we were in no danger, although I wondered how heavy the officers’ trigger fingers had grown during the recent uprising.

Boubacar, with his effortless charm and peaceful air, smoothed out the situation. Phone calls were made, small gifts were passed and Jonathan and I parted with our third and fourth passport photocopies.

“Boubacar,” I said as we pulled away from the checkpoint, “I am so sorry we are being a problem for you.”

“Don’t worry. I am used to this kind of thing in the Sahara,” Boubacar replied, as if the region hadn’t just endured its worst episode of violence in more than 30 years.

The city centre was now hushed and dim, only days after the conflict had bathed the streets of Laayoune in the ginger glow of flaming cars and torched buildings.

At Boubacar’s second-storey apartment, I muddied the white tiles of his bathroom floor as I took my first proper shower in weeks. We spent the evening pouring cups of tea in his carpeted salon, as our host schooled us in the history of his people’s struggle for nationhood. He talked about the abuses inflicted on the Sahrawi people by the Moroccan government, of the world powers’ opposing stance on nationhood for Western Sahara, and the Polisario Front, the liberation movement of the Sahrawi.

We emerged on the street under a steel-grey sky the next morning and said goodbye to Boubacar as he made his way to work.

“Oh, and be careful,” Boubacar warned as we parted ways. “Don’t take any pictures. They won’t like that.”

Police were posted on every corner and gendarmes cruised the streets in bulky trucks. The city was slowly waking and returning to its usual habits. Porters pushed carts through the streets, boutiques were opening their doors and blackened springs broke free from the carcasses of charred vehicles. The reddish-orange buildings were brushed with a thin layer of soot. Shattered glass had been swept off the sidewalk, but holes remained gaping from the first, second and third storeys. 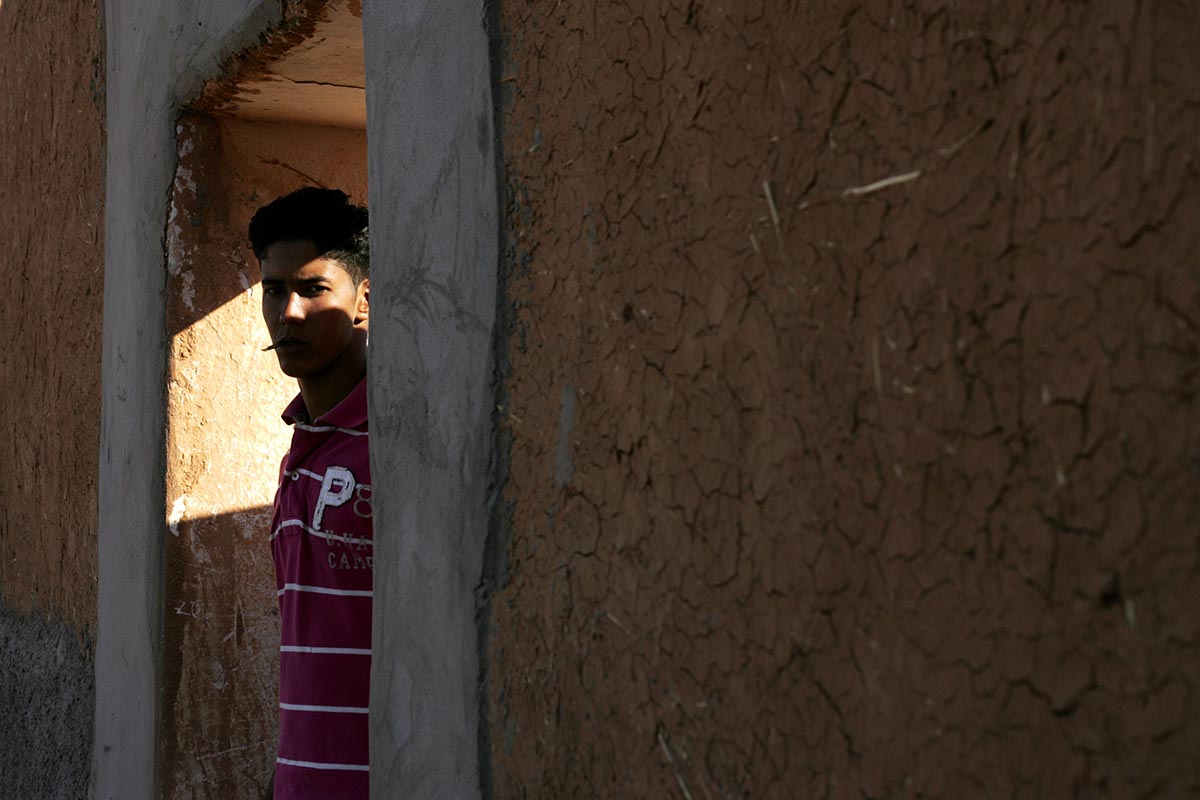 The walls have eyes in Tessegnane, Morocco.

I noticed Jonathan lagging behind me. I turned to see him snapping photos from his hip.

“Dude. What are you doing? Put that away. You’ll get us arrested,” I said through clenched teeth. We had already nearly been arrested a week before when we were caught trying to sell donkeys in a sheep market.

“Chill out. Nobody can see me,” he said, taking a couple more photos before putting his point-and-shoot away.

We stuck our thumbs out as we reached the main boulevard. 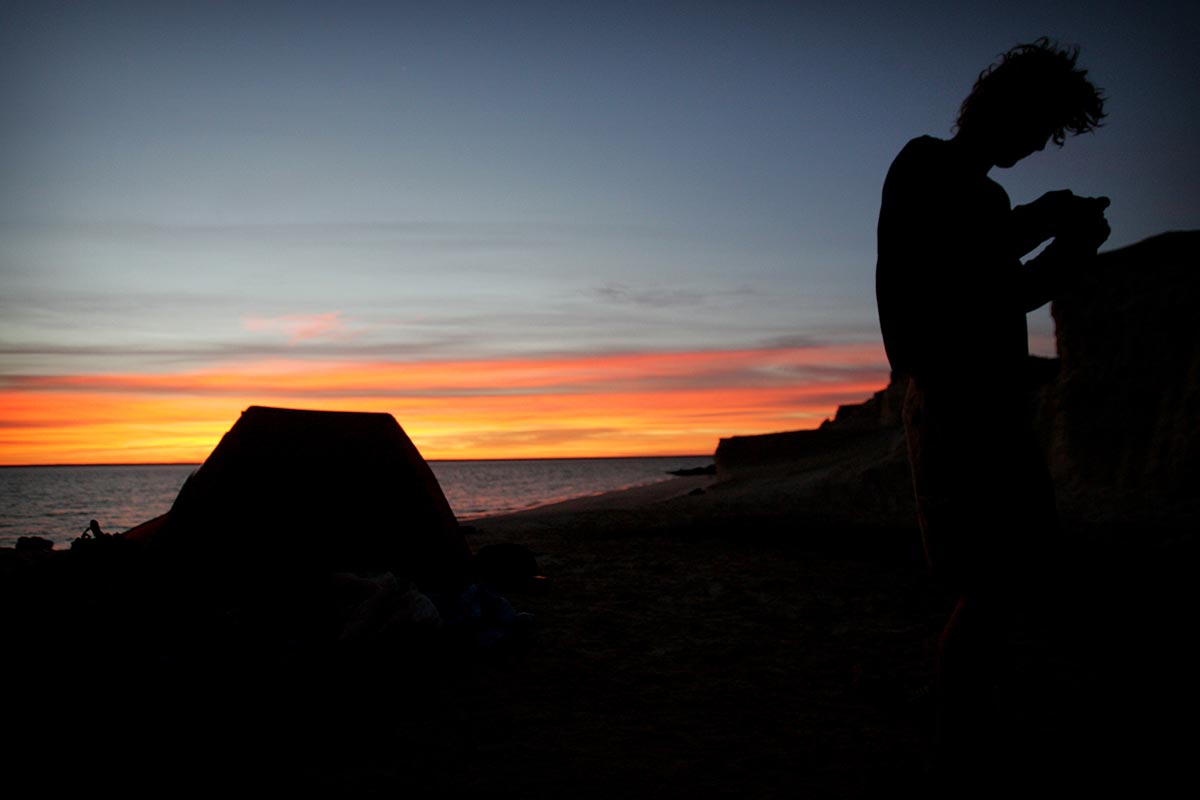 Within moments, police and gendarmeries vehicles pulled up in front us all at once. Two officers hustled toward us. “Where are you going?! Show me your papers,” they shouted in French. We pretended not to understand. They tried Spanish, but we refused to speak anything except English. Jonathan and I glanced at each other in feigned confusion as they discussed the situation in Arabic and fidgeted with the guns slung over their shoulders.

Languidly, we fished the photocopies of our passports and visas from our bags. Unsatisfied, they fired questions at us in French about our destination and our motives. Channelling Jonathan’s relaxed confidence, I suppressed the quivers running through my arms as the crowd of uniformed men swelled around us. We kept our mouths shut while one of the officers called on his radio for an English speaker.

Accounts of the riots were still an unsorted mess of accusations and conflicting stories. We didn’t know at the time that the troubles had started in a month-old encampment outside of the city. The temporary settlement had been growing as a protest movement against Moroccan occupation and came to a head when Moroccan police dismantled the camp and arrested 3,000 people. These hostile actions were so egregious that it spread from the camp to the city. By the next day, police were clashing with civilians as they set fire to cars, government buildings and banks. The true civilian death toll remains contested. Noam Chomsky would later deem it the first protest in the so-called Arab Spring.

But we knew none of that.

An unmarked white SUV pulled up and an officer of considerable rank stepped out of the passenger seat. He approached us with an air of calm arrogance.

He examined our documents, and we explained why we didn’t have our physical passports. He wanted to know why were in his city and we explained that we were just passing through on the way to Mauritania.

“Did you take pictures here?” the officer asked.

We both denied knowing anything about taking such pictures.

“You don’t have cameras?” he said, clearly not believing us.

“No, would you like to search our bags?” I said.

“You must leave this place now,” he said curtly. 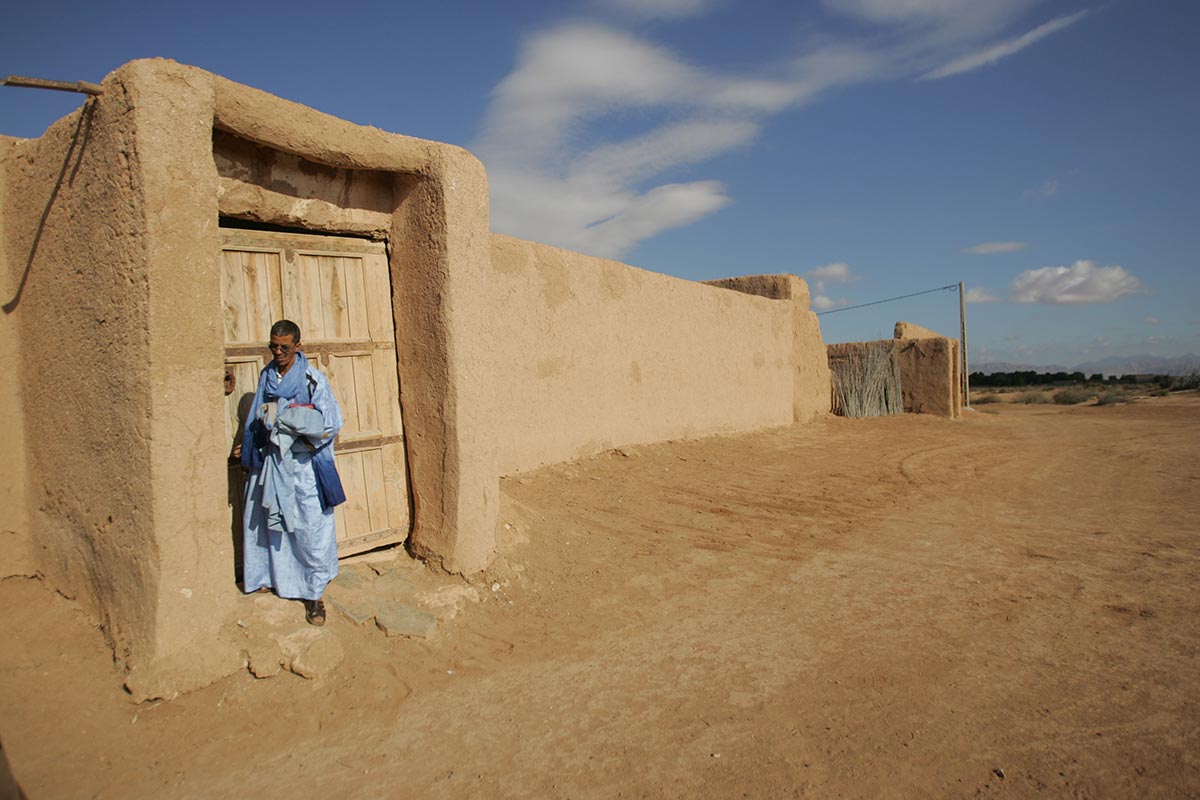 A snapshot of Guelmim, Morocco’s “gateway to the Sahara.”

“We would very much like to leave this place now. We are trying to hitchhike,” I said.

“You don’t understand. You must leave right now.”

“Perhaps you can help us stop one of these cars,” I said. He flagged down the nearest taxi, but Jonathan informed him we didn’t want to take it—we had little money and wanted to hitchhike.

“Put your bags inside. You will take this taxi to the next town. It is your only option,” he said, implying that we didn’t want to know the other option.

We asked how much it cost, and the officer told us it would be 12 dirhams each. He and his mob of law enforcement made it difficult to argue. We scrounged together the $3 for the driver and loaded our packs into the taxi. We didn’t know what we would find in the next town or if we would be forced out of there too. We remained ignorant of most details concerning the uprising, where it was happening or could spread to.

As we continued travelling through the Sahara and the Sahel, the scorched city of Laayoune faded from our consciousness. Meanwhile, similar revolts swept across North Africa and the Middle East, which I was scarcely able to follow on my cheap radio. Months later, as I saw people marching through the streets of Bamako, waving the Libyan flag and holding portraits of Muammar Qaddafi, I could not have imagined that what I was witnessing was related to Laayoune, let alone what it would mean for the future of the region.

Joey Anchondo is a photographer and writer based in Saint-Denis, France. In the course of his travels, he has encountered three incompetent thieves, leapt from two moving buses, eaten one meal in Bhutan and discovered zero new species. He is currently working on a cookbook on how to make food while living abroad in rural Africa titled “Take Your Thyme”.

This is What the End of Winter Looks Like