Though the destination is indeed spectacular, how you get to Machu Picchu is definitely half the fun!

Story and Photos by Desiree Anstey

Children flash snow-capped teeth upon our arrival and come running to see what we bring. It’s one of the most isolated indigenous communities in Peru, which only sees a trickle of tourists pass through its meadows guarded by remote mist-veiled mountains.

It’s still dark when we leave the unnerving mess of traffic in the ancient Inca capital of Cusco and snake into the wilderness along the hairpin curves. We pass herds of alpacas and llamas, before merging into a lunar landscape with a group of three porters and a guide named Adolfo. 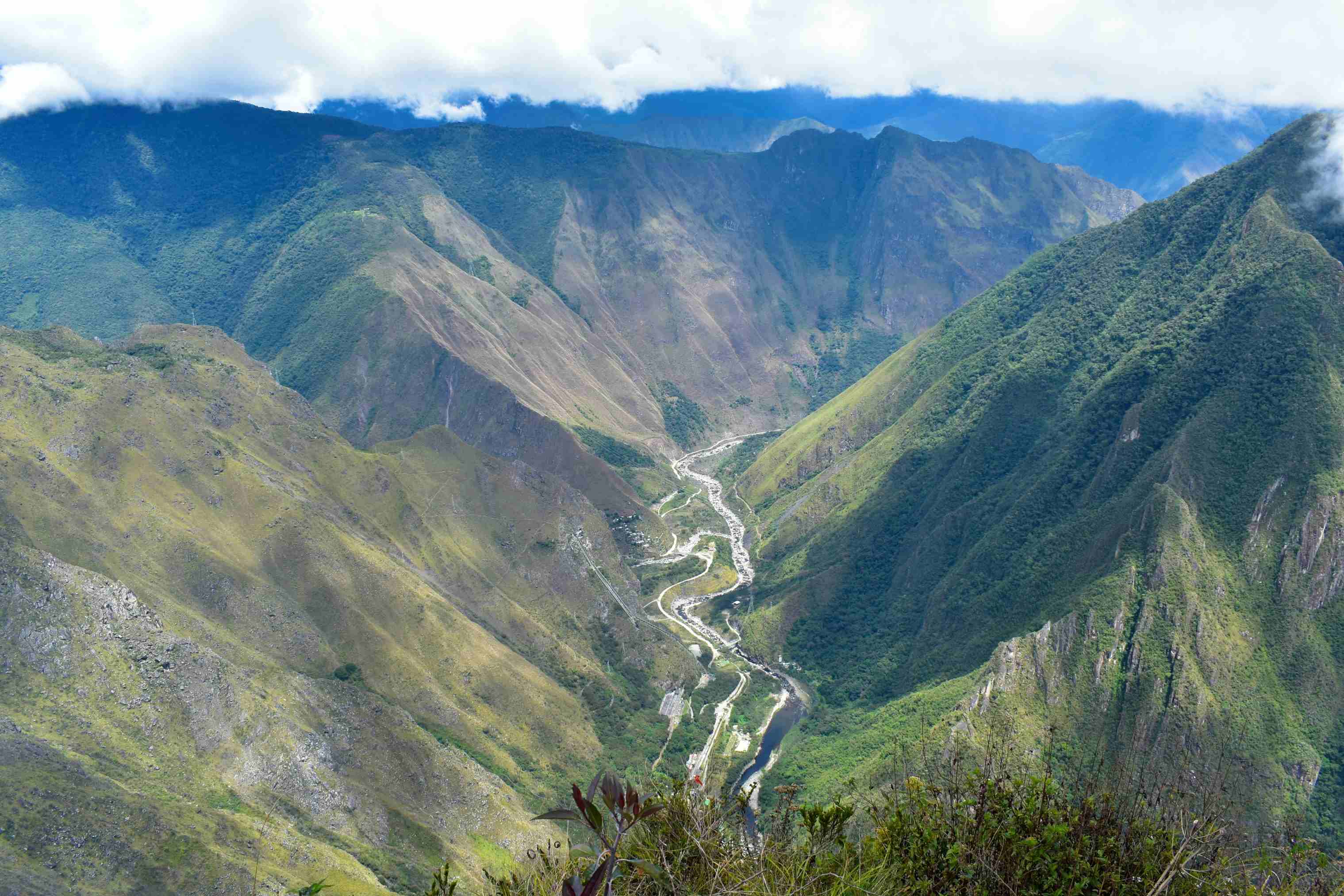 Panoramic view of the Andean valleys of the Lares Trek.

Terry, my husband, and I have spent two days acclimatizing in the bustling city near the Urubamba Valley at an elevation of 3,399-meters (11,152-feet), while drinking coca tea. The herbal green tea is made from leaves of the coca plant native to South America. Generations have consumed this plant to relieve the symptoms of altitude sickness. It works by improving the oxygen intake and blood flow.

We are taking the lesser-known Lares Route—often called the “Weavers’ Way”—to Machu Picchu. The trek is starkly different to the well-trodden Inca Trail that sees thousands of tourists each year and requires booking well in advance. Terry and I are the only participants on this four-day/three-night trek we’ve booked with a tour operator. 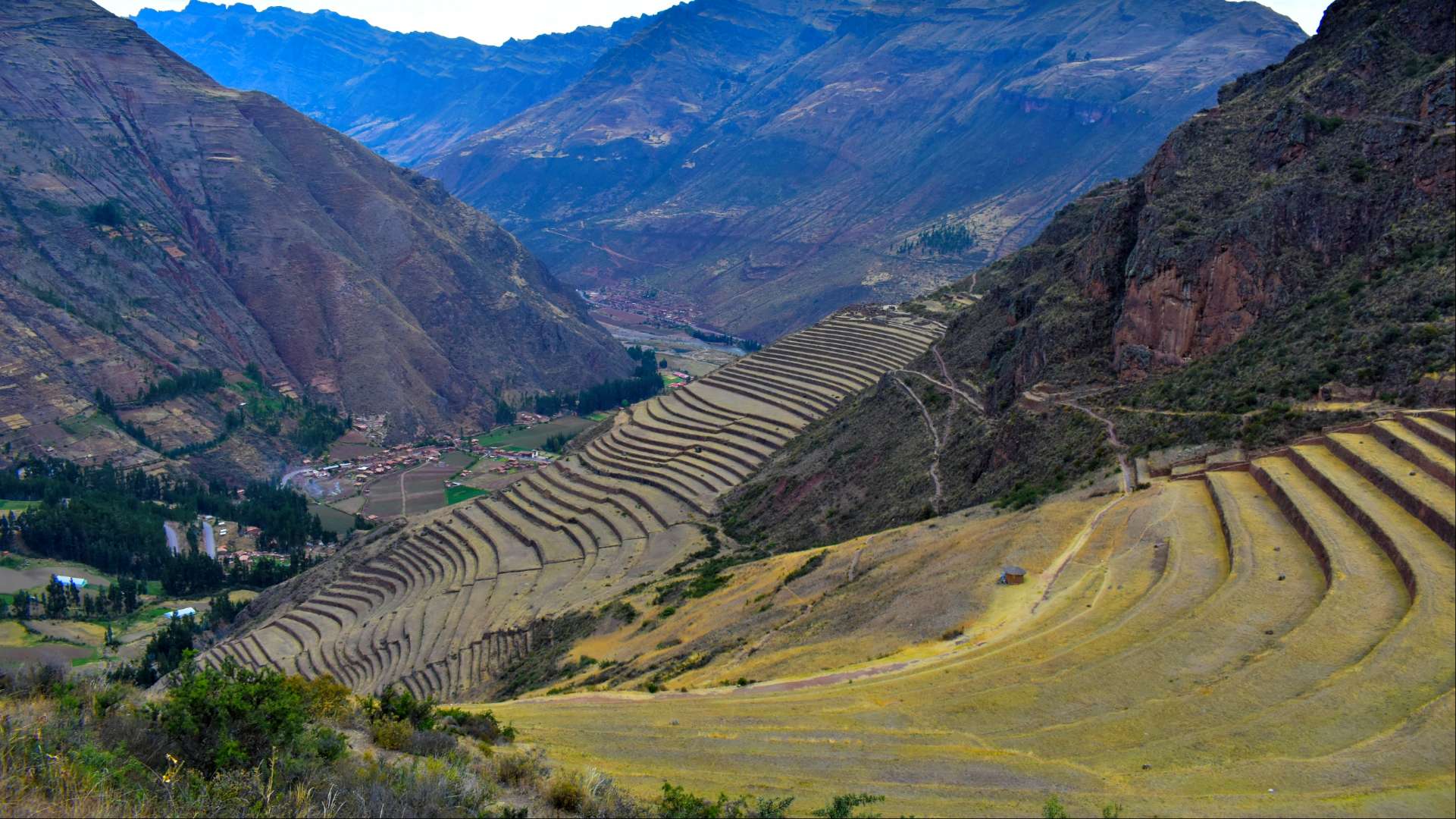 The stunning agricultural terraces below the Pisac Inca ruins.

Guided by the early morning moonlight, within the hour we arrive at the Sacred Valley to explore the ancient remnants of Pisac Inca Citadel. The ruins, aligned with the rising sun, overlook agricultural terraces that comfortably blend with the moving landscape. Nearby are empty tombs robbed bone dry of their priceless treasures by Spanish conquistadors.

We catch our breath, take in the view, then hike back to the rickety van. It’s a 40-minute drive from here to the town of Huaran, where we begin our adventure. A cowboy and his mules wait for us in the downpour. Everyone waves goodbye to the van and civilization while the mules are loaded with the main supplies. 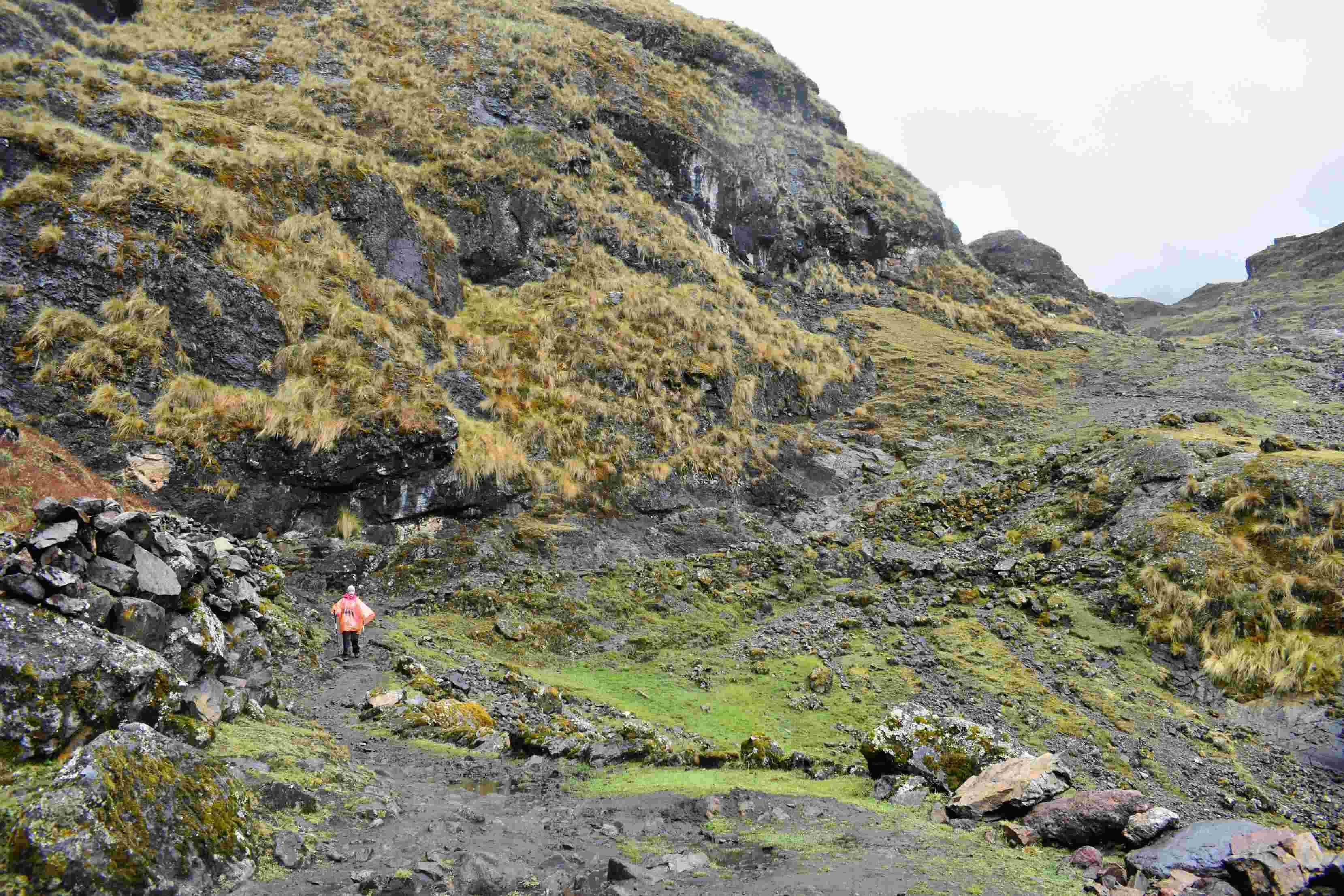 The author on the lesser-known Lares Route, often called the Weavers Way.

“Slow and steady,” Adolfo reminds us. He moves like a cat across the slippery loose rocks. By late afternoon we reach our first campsite at Canchacancha. My bones creak like the springs of the old van. And, thanks to the altitude, I feel as lethargic as a rubber band that’s lost its elasticity, as excited youngsters run with boundless energy to greet us. 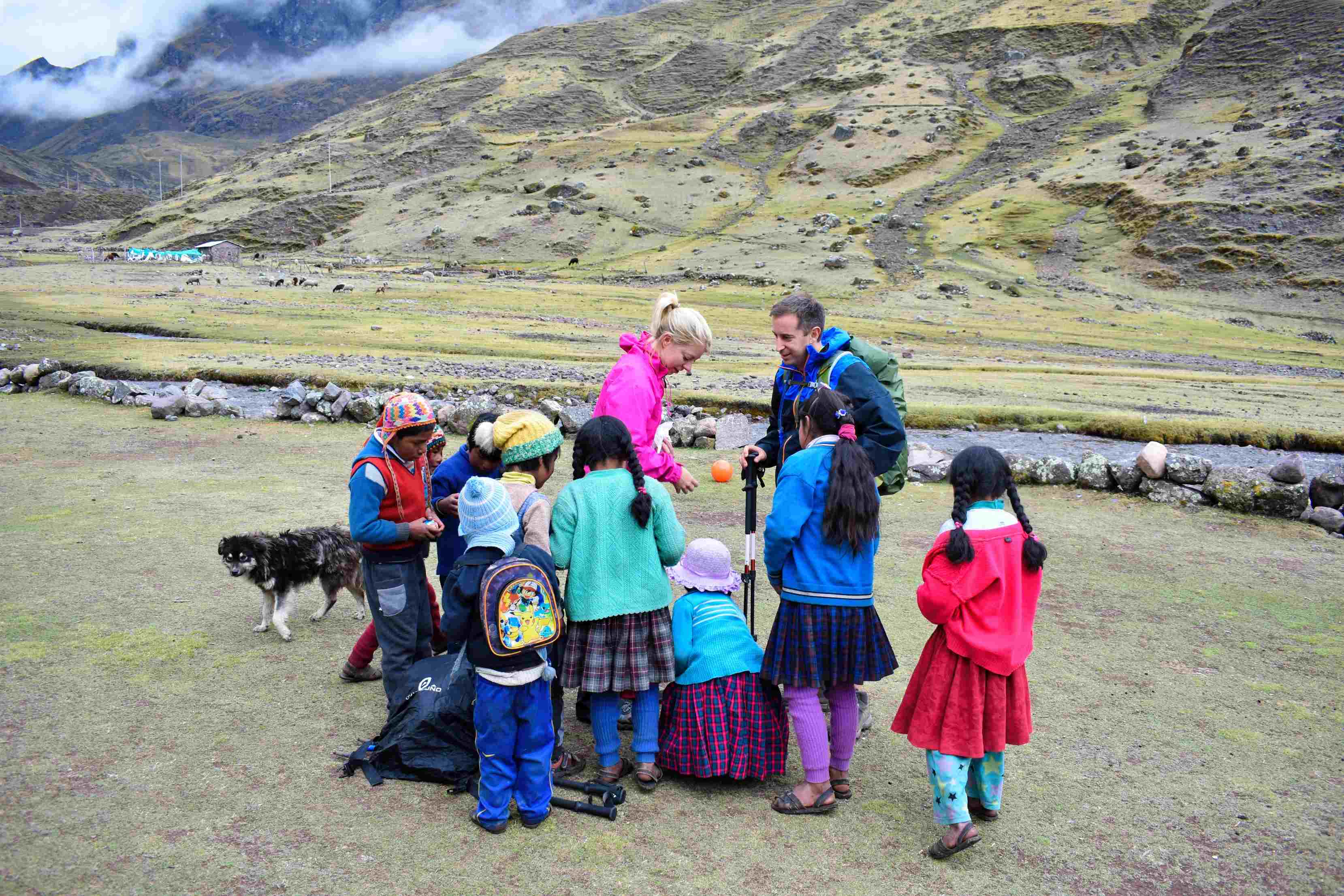 Best part of the trip!

I slide my backpack off and Terry does the same. I tug it open and take out toys and candy that we accumulated before the trek at a local market. Their giggly curious faces brighten as we hand out the items never seen before

Nearby are simple stone homes with thatched roofs. There’s a clinking of bells on llamas as women dressed in colourful traditional Andean attire bring their herds into the valley for the night. Here, potatoes are planted by hand and preserved in the natural refrigerator of the glacier river, where our tent is perched on the banks. The porters have already set up camp, cooked something that smells like meat stew, and are pouring mugs of sweet coca tea for us. 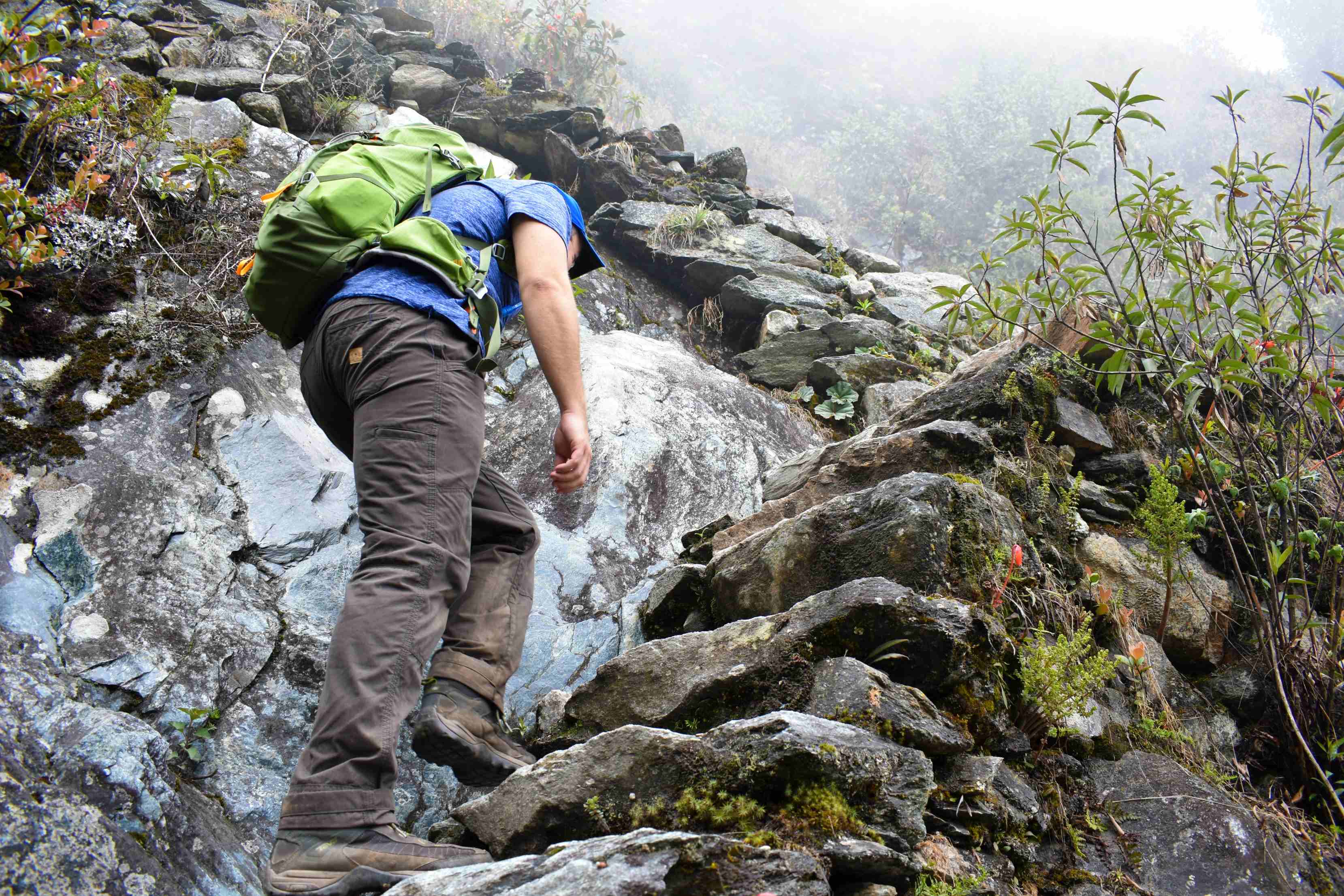 As darkness falls and temperatures dip, Terry and I climb inside our tent and listen to the splashes of the river. I contemplate what it’s like to live in a world without modern devices while practicing centuries-old weaving and farming techniques. The children seem perfectly content. And I find being in this valley—away from technology and the noise of society—is to be close to the heart of everything. Then I close my heavy eyelids, with a smile on my lips.

I greet the next day with a yawn and a cough. We can hear the stir of pots as the porters pack, eager to begin. The chef has prepared breakfast and the world slowly rises to life. Today we scale Pachacutec Pass at 4,700 meters (15,420 feet). 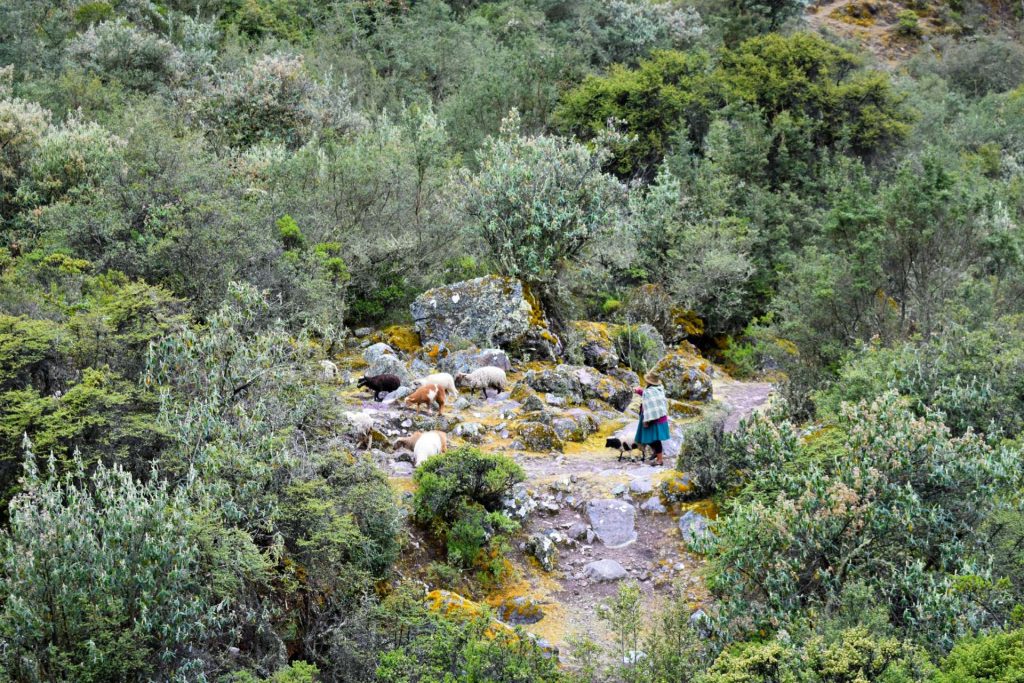 By the time we reach the summit/pass, the first thick snowflake has fallen and now we are in a cloud of white. Climbing is as much about the mind as it is the body. The wind, rain, and snow are relentless. There are no 15-minute breaks, like before. We just want to get off this dangerous peak. Our campsite for the night is at Quishuarani, down at 3,700-meters (12,139-feet). Everyone is exhausted by the time we arrive.

Early in the morning, we say goodbye to the cowboy and his mules at the natural volcanic Lares Hot Pools. We leave him with a token of goodwill, then depart with the porters and Adolfo, all cramped into a small vehicle with limbs dangling out windows. By the end, we’re all reeling from the uncomfortable ride. 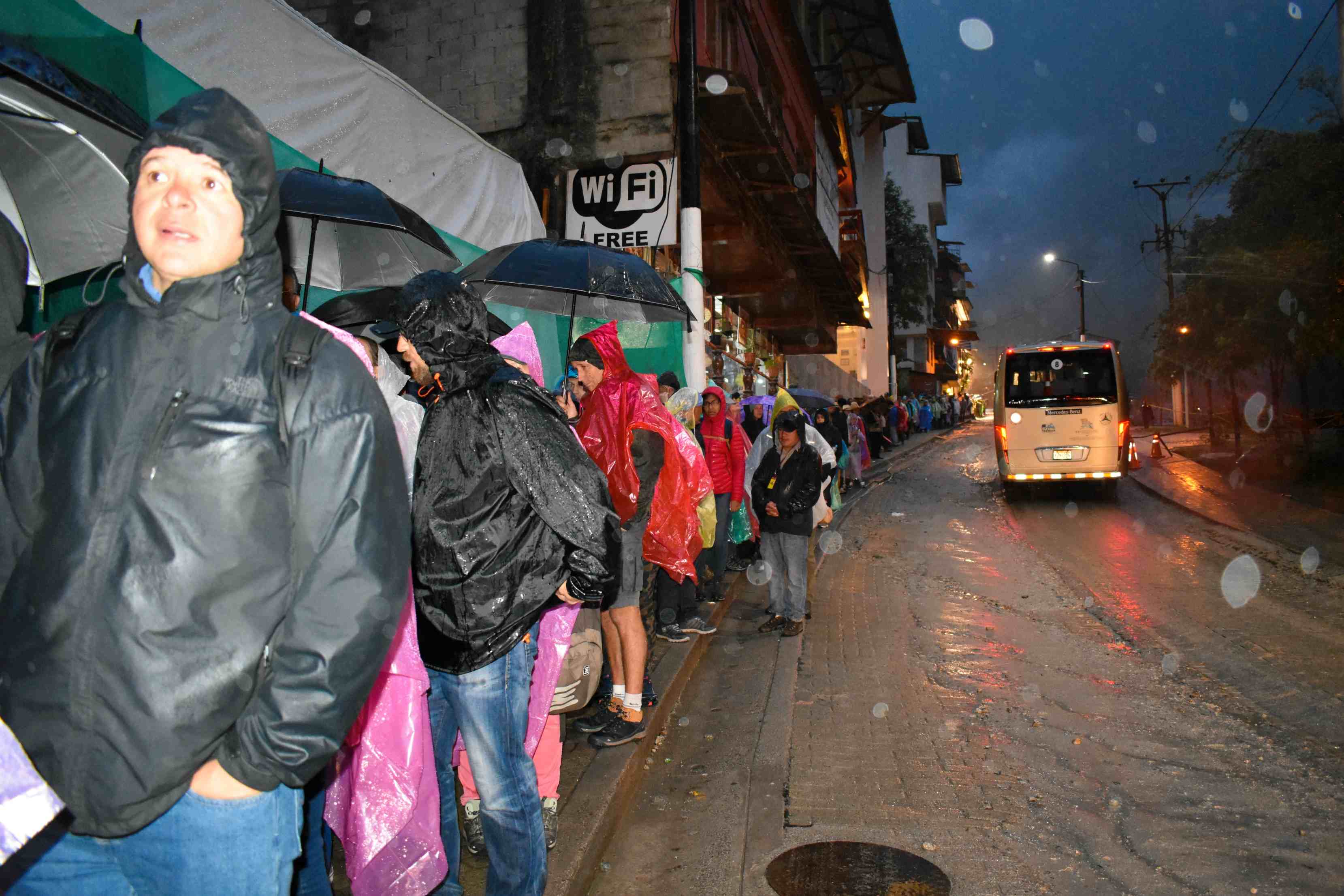 Waiting in line in the early morning for the bus to Machu Picchu.

The three of us—Terry, Adolfo, and I—catch the train for the last leg of our journey to the town of Aguas Calientes, tucked below Machu Picchu. Stars pepper the sky as the train pulls into the center of the noisy tourist town. After check-in at our hotel, I have the longest welcoming shower.

The air seemed fresher and cooler this morning as the wake-up call came just after 4 a.m., but I felt a liveliness like never before at this time. It’s still dark when we look at the same inky sky that the Incas revered. It’s a direct connection to them, and for now I can think of nothing else that can work that magic. I wish I had a better understanding of the constellations, the way they move, how they make their mathematical music. I have a sense of it, but not like the Incas. 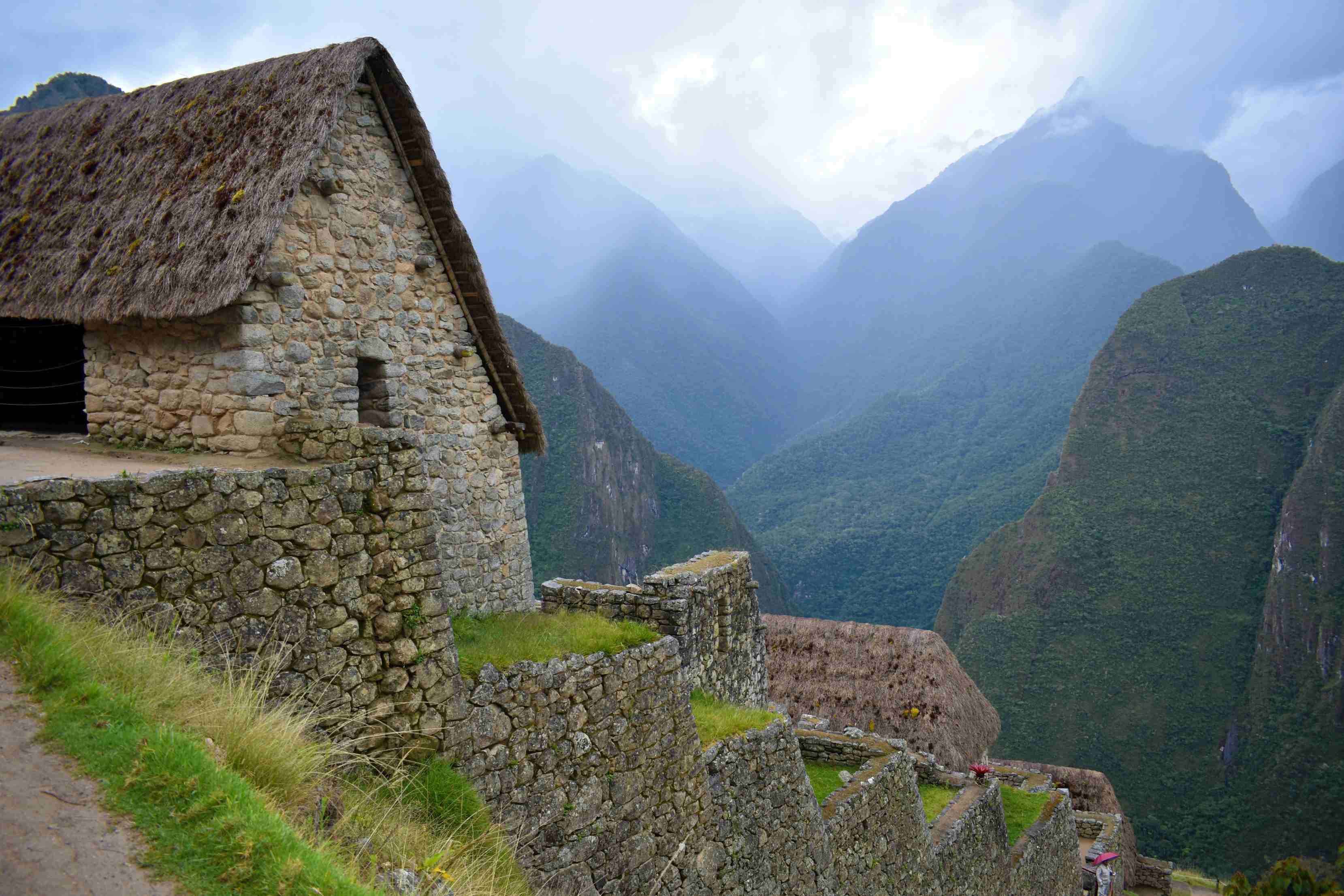 A structure atop MP, with the long shot of the Andean valley where it lies.

The Incas knew how to build in line with the stars and sun. Machu Picchu is a shimmering example of loving the darkest night as much as the brightest day. And no longer was this a mere trip, but rather a cultural unfolding set in mystical landscapes where events worked their way up to the grand finale.

Machu Picchu, a Quechua word deriving from “Machu” that means old or ancient, and “Picchu” meaning mountain, translated “Old Mountain,” was about to reveal itself to us. A mysterious early morning mist floats through all the cracks, giving the site an opalescent appearance. 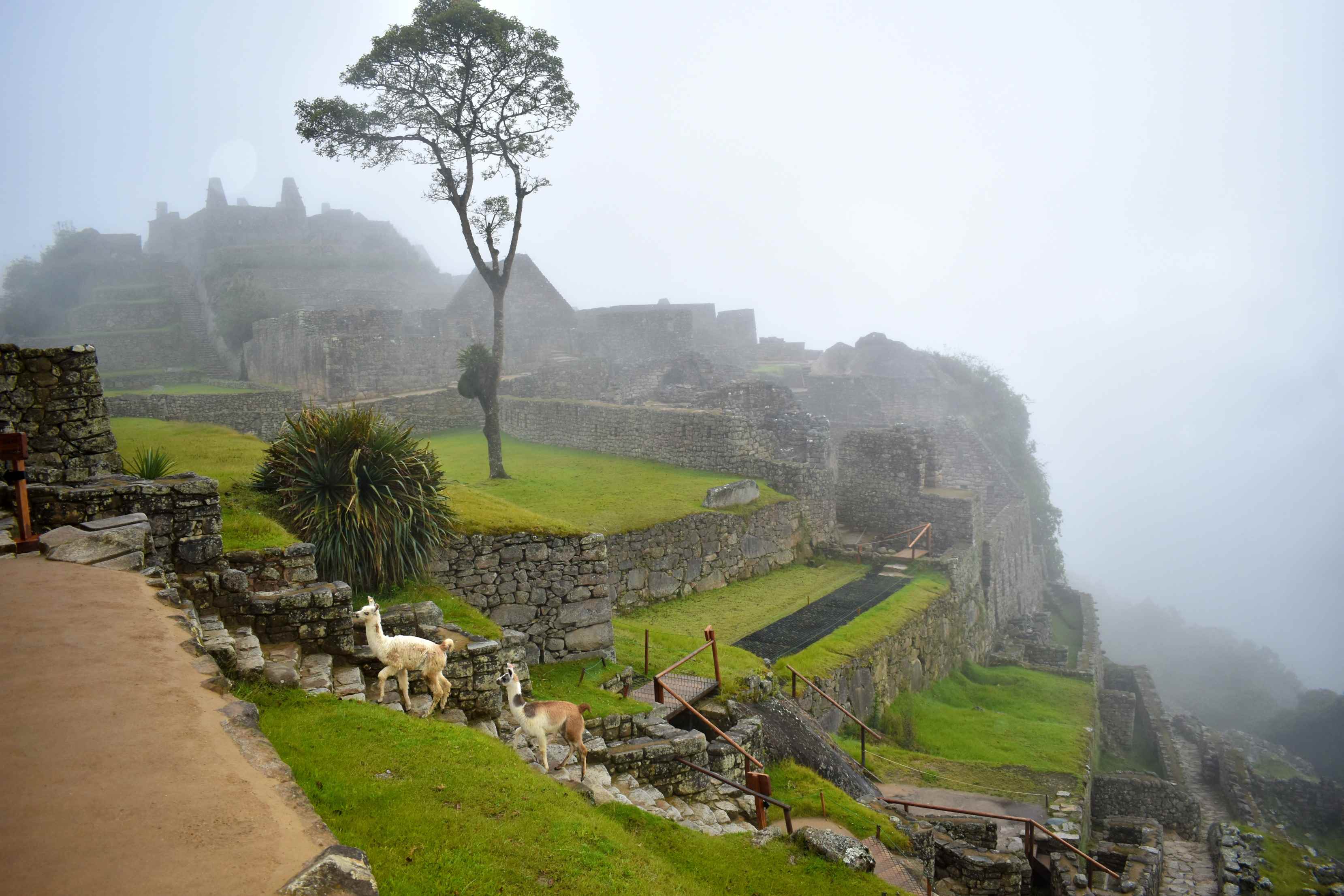 Adolfo explains to us how the Incas built the city of stone without the aid of wheels or iron tools, with more than 700 terraces and roughly 300 people living in symphony with the landscape. He says it may have served simultaneously as a center of worship, astronomic observation, and a stop for the royal family of the Inca Emperor Pachacutec.

I sit on a grassy ledge and study the classic image I had admired for so many years. Across from the remains is a piton-shaped mountain known as Huayna Picchu, sculptured in the shape of a face. Everything is sacred and cultural about this place, which was always there but rediscovered and unveiled to the world by the American explorer Hiram Bingham in 1911. 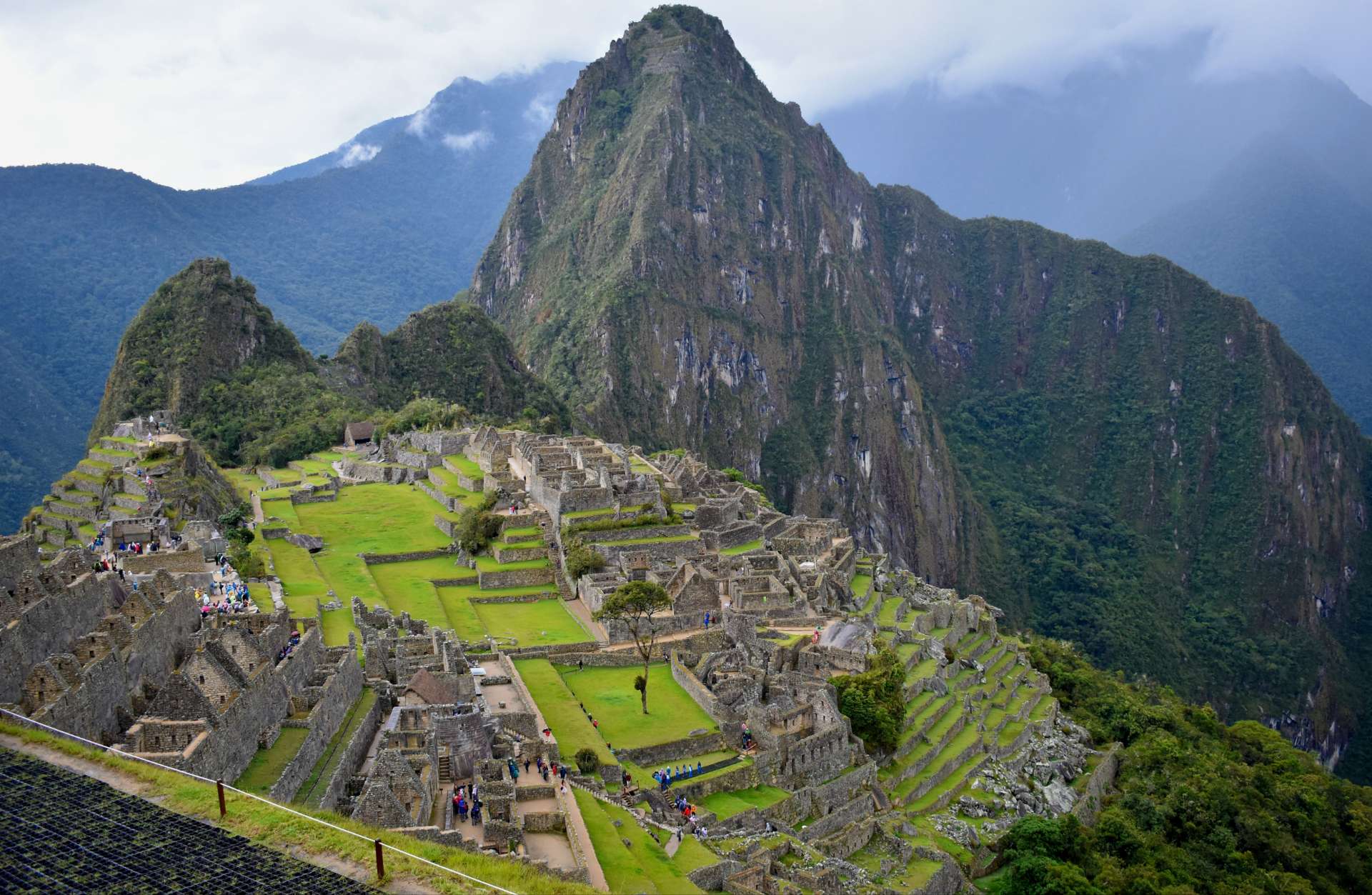 The author gets the classic shot!

But it’s time to leave this special place, and I can’t help but feel a stream of longing. Perhaps this magnetic pull is the magic of the “Weavers’ Way” that leads to Machu Picchu. I catch my breath in the freshness of the wind, with the horizon spread out before me.

Desiree Anstey has a longstanding passion for travel. She’s a multimedia journalist for the Journal Pioneer in Summerside, PEI, Canada, as well as columnist for Saltwire, and writes regularly about PEI. To see more of her work visit www.isleink.com.

7 Questions for Intrepid Travel | Does a Year of Lockdowns Make Future Travel the Ideal Gift?