In the wee hours in Port of Spain, our writer tastes the spicy side of Trinidadian life.

Story and Photos by Marc-André Roy

“Back o’ de line, mon,” says a hungry, dreadlocked Trinidadian as he waits for his late-night roti. Mama Roti’s, on downtown Port of Spain’s happening St. James Street, is a popular spot. Generally, Trinidadians are easygoing, laidback folk, but get in the way of their roti and their demeanours seem to change.

I back away and hop to the back of the line, letting the smells of fresh roti fill my nostrils. A line of people stretches along a row of makeshift tables-cum-roti-assembly-line waiting to place their orders.

Virtually every city I’ve been to has a trademark late-night snack. In Toronto it’s street dogs, in Istanbul it’s döner kabab, in Gothenburg it’s sausage and mash, in Lagos it’s suya, and in Port of Spain, where my stomach is currently grumbling, it’s roti. 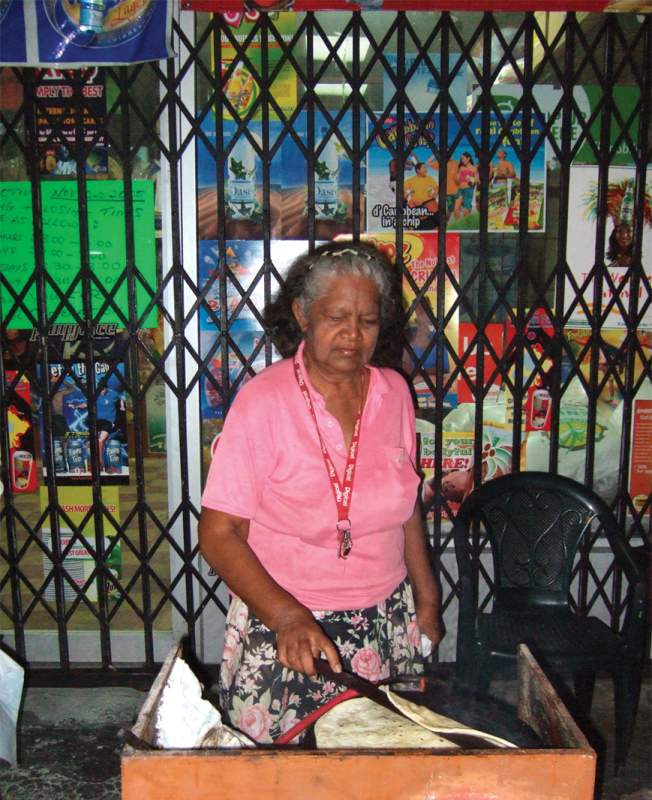 I make it a point to eat local dishes everywhere I travel. Not only is it a great way to experience new taste sensations, but sourcing small establishments also connects you with the people who live there. In Trinidad, that means roti at Mama Roti’s.

I’m not exactly a roti virgin. There are lots of good West Indian roti shops in most big cities in Canada, especially Toronto, where there is a significant West Indian population. But I’ve been told it’s better at Mama Roti’s. I’m about to find out.

This spicy package of curried vegetables and/or meats is a staple food in Trinidad and, indeed, most of the West Indies. Technically, it’s the outer shell—a thin, floury bread not unlike Indian chapati or nan—that earns the roti label, but spice, and lots of it, is usually a key component. This stuff can be hot.

Though typically a lunchtime meal (it tends to sit heavy in the belly), Mama Roti’s serves up smaller, hand-size portions designed to cure that echoing, wee-hours hunger. Late into that hot Trinidadian night, it is exactly what I am after—even if it means a 15-minute wait.

While biding my time, I soak in the sights of St. James Street. The beat of calypso music from nearby bars and passing cars bounces through the air. I can’t keep my foot from tapping to the beat. People are everywhere. Young club-goers dressed to the nines strut the street, while Rastas stroll along casually. The crowd is mixed: roughly half is Afro-Trinidadian, the other half Indo-Trinidadian. The street is jammed with cars and the sidewalks are crowded, despite the late hour.

The line in front of Mama Roti’s stand is moving, albeit slowly, and I’m now five minutes away from the front of the line. My mouth is watering. Another two minutes pass. Now I’m starving. Finally, I make it to the order counter.

“I’ll have two,” I say, perhaps a little over eagerly.

Without skipping as much as a beat, Mama Roti’s three-woman team starts to prepare the order. 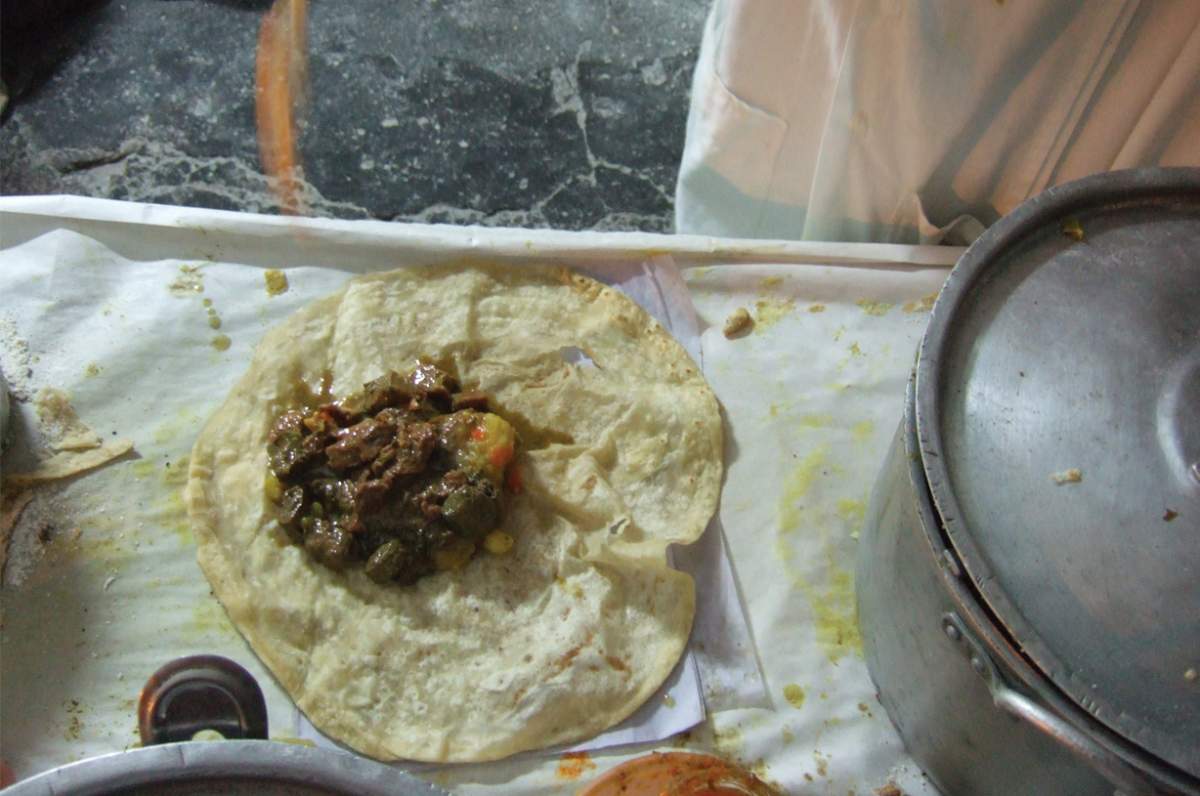 Just watching them is a treat. This team has roti-making down to a science and my food is assembled, fresh, from scratch, within seconds.

The first woman, wearing a white kitchen coat and a big smile, makes two little balls of dough (made from wheat flour, salt and water) and then rolls these into thin, flat, pizza-like shells about eight inches in diameter. Then, the matriarch herself, Mama Roti, an older, Indo-Trinidadian woman with long dark hair and a mellow manner, cooks up the flattened rolls one by one on her iron griddle (or, in roti parlance, a tava). She flips the roti with grace, sending an enticing waft of fresh bread into the air, drawing passersby off the street and into the line.

Once slightly browned and spotted on both sides, she flips the hot, perfectly cooked roti into the hands of her assistant, the filling specialist. Standing in front of a bunch of large steaming pots, the “filler,” an Afro-Trinidadian with hair pulled back tight, gives me a “What will it be?” look. Hmm. Decisions, decisions.

“OK, how about the goat?” I continue, undeterred.

My shoulders slump slightly. “So what exactly do you have left?” I ask, a bit desperately.

I weigh my options. Roti filling is, after all, a heavy decision. Finally, the filling specialist solves my dilemma.

“You can do half-and-half if you want.”

Hallelujah. The best of both worlds. Beef and liver it is.

But a real Trini roti is not complete without a little extra spice. This is, after all, the Caribbean. A roti without spice would be like a cheesecake without cheese. The filling specialist sees me eyeing the pot of pepper sauce.

She spoons a tiny amount onto my roti.

She eyes me up and down. “No,” comes the reply with a prim smile. Then, she packages up my meal in a brown paper bag and hands it over. 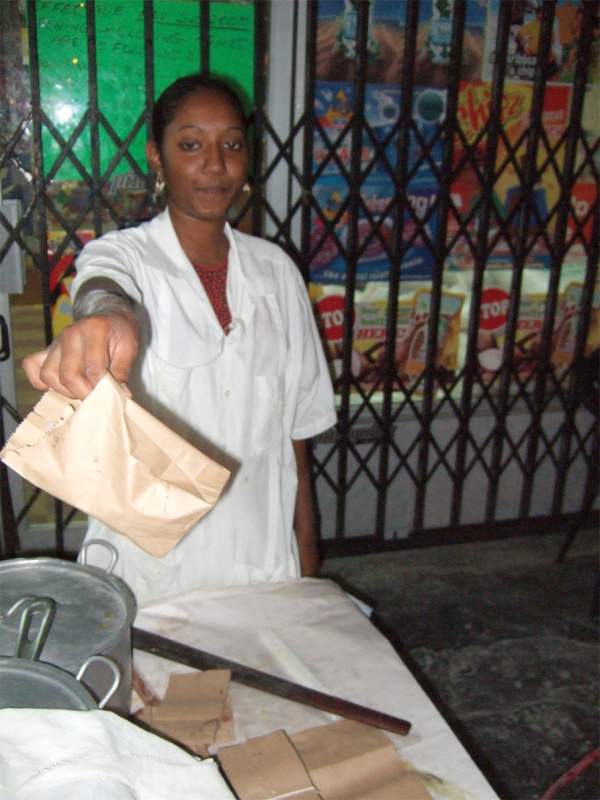 Even before putting my wallet back in my pocket, I peel back the brown paper bag and sink my teeth into this Caribbean goodness. Flavours overwhelm my taste buds; the liver hits first, then the curried vegetable mix, next the beef and finally the pepper sauce. It’s good. Really good. So good, in fact, that I’m ready to step back in the long line for round two and the dregs of the liver pot.

But thankfully I’m talked out of it, and it’s a good thing, too. The next day would be filled with “Bake ’n Shark” sandwiches, another Trini delicacy, on the edge of Maracas Beach. But that’s a whole other story.