I turned up the collar of my black trench coat and thrust my hands deep into my pockets. I didn’t have a semi-automatic pistol to clutch, so I held my phone instead. We had fallen into a Cold War movie, and I was trying to act the part.

We’d spent the night of Tomoko’s birthday on a train from Krakow to Lviv, where we ate a railway station cake on hard fold-down bunks, chased with lukewarm Polish beer. I’d only just settled into dreams for the night when the jolting and shunting of the train brought me back to some form of semiconsciousness.

I heard the clump of heavy boots from somewhere down the carriage, followed by a sharp knock on our door.

“What’s going on?” Tomoko asked from somewhere near the ceiling.

I sat up to grab my shoes and promptly smashed my head on the underside of her bunk.

But when I opened the door, the narrow passage was filled with soldiers. The rest of the night was a blur of soldiers of uncertain nationality, and the ring of heavy hammers on metal as the wheels of each carriage were adjusted to fit the gauge of Ukrainian rails.

There wasn’t much sleep once we resumed our journey. The sun rose on a bleak grey landscape of derelict factories and fields that looked blighted by industrial waste. And then we finally rolled into the city of Lviv, Ukraine, and the railway station I described above.

“Turn up your collar and scowl a lot.”

We were surrounded by bleary early morning faces, some of whom reeked of stale vodka. There were only a few families picking up loved ones after a journey. Everyone else seemed to be skulking around. It felt like the sort of place where people arrange dead drops or hide microfilm in toilet tanks.

We eventually found a money changer outside the station, beyond a gauntlet of taxi drivers. The currency was a mess of crumpled bills, but we had enough to get into town. The tram looked as bad as I felt at 5 a.m., but despite squeals of protest and the sort of jolting that rearranged one’s vertebrae, it took us to the main square, where we wandered empty cobblestone streets in search of the flat we’d rented on Airbnb. I didn’t actually have an address; only the name of a nearby church, and a photo of the door. 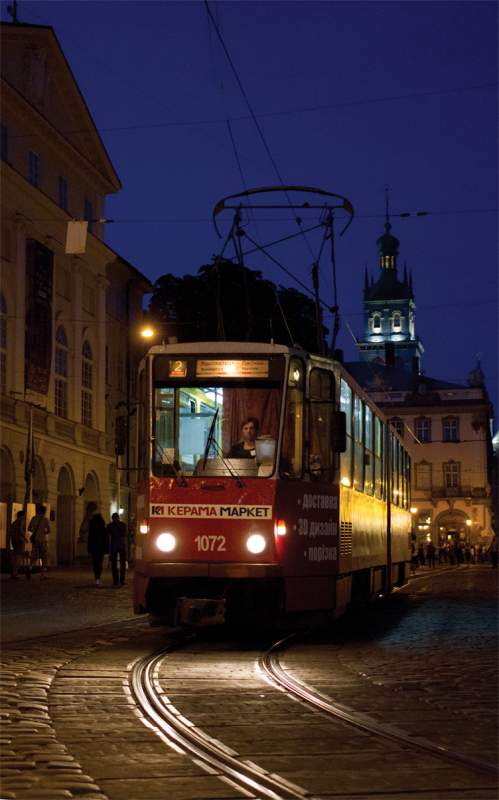 Taking the tram from Rynok Square, the pulsing heart of the city

“That courtyard has a murderous look about it,” I said as we stepped inside. “The sort of place where assassins lurk in the shadows…”

The building seemed derelict from the street, and the stairs shook as we trudged up with our bags, but the flat was surprisingly nice and very spacious for two people. When the host left, we collapsed onto the bed and into a dreamless four-hour nap.

It was like we’d fallen asleep during the height of the Cold War and woke up after 1989. When we arrived the town was closed in upon itself, huddled behind locked doors and thick walls. But now the square was filled with cafés.

Lviv was situated at the crossroad of two ancient trade routes, and it has been part of Hungary, Austria, Russia, Poland, Germany and the USSR. The city reached its peak of prosperity in the early 17th century, but a series of sieges, wars and the breakdown of regional powers in the late 17th and early 18th centuries reduced Lviv to a marginal status and put an end to its influence.

Today it’s a place where West meets East, where Old Europe bumps up against the former USSR—but that bleak concrete vision is only hinted at in a city which was spared wide military boulevards and tacky Lenin statues. Instead, it contains the best of both, and we encountered Ukrainian, Polish, Armenian, Jewish, German, Austrian and other cultures on each walk through town. 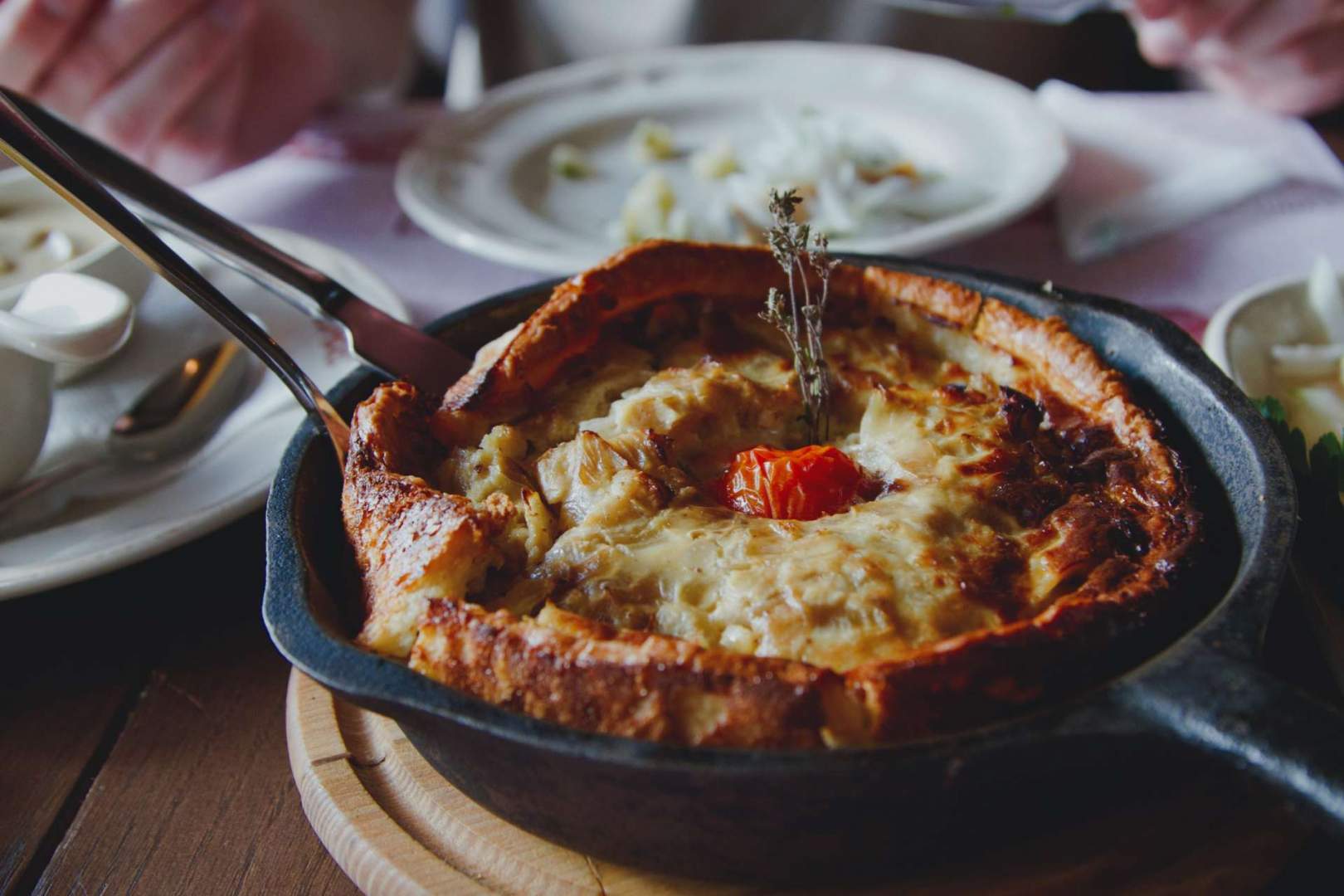 Where food is heavy and delicious!

You can see this reflected in the cuisine. For our first breakfast at one of the many excellent cafés that encircle Rynok Square, we sipped strong coffee while eating a Jewish dish of smoked salmon, cheese and chewy bread, followed by an Austrian pastry.

The Austrians brought their coffee obsession to Lviv in the late 18th century, and you won’t find a better cup with cream this side of Vienna. The selection of sweets and pastries on offer from the neighbouring cafés provides enough tooth-busting goodness to put your dentist’s entire family through university.

Rynok Square is the beating heart of Lviv’s old town. On summer nights, its fringes fill with café and restaurant tables, and cheerful beer drinkers wander arm in arm, pausing to watch the many street performers, or perhaps to shop for a floor mat or a toilet roll printed with the face of Vladimir Putin. 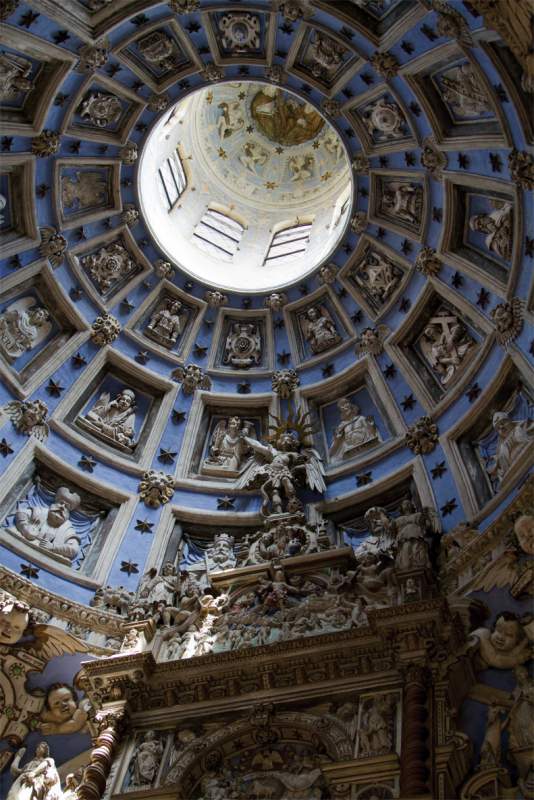 The spectacular dome of the Biom Chapel, a late-Renaissance gem.

When it comes to Ukraine’s giant neighbour, the locals are quick to voice their outrage at the recent invasion. And despite Lviv’s distance from the fighting—this is a massive country, and the city’s quite safe—the signs of Russia’s aggression are not difficult to find. But we’ll get to the present a little later since we’re still firmly enmeshed in the past.

The square was surrounded by wonderful examples of the sort of period architecture that make Lviv such a gem. If I had to share just one example with you, it would be the magnificent late Renaissance Chapel of the Boim family, tucked into a quiet corner of neighbouring Cathedral Square. In 1615 a wine merchant called Georgiy Boim built a family chapel of incredible beauty. The black facade is entirely covered in stone carvings that show the Passion of Christ, which used regular city dwellers as models. The interior is a world in miniature, but the wonderful decor left our necks with such an ache from looking up that we needed a medicinal pint to heal the pain.

Fortunately, this city’s other great beverage is beer. This noble beverage has been brewed in Lviv since the 15th century. We backtracked to a bar called Christopher, on the same street as the Dominican cathedral, and, as luck would have it, right across from our flat. I opted for a crisp, refreshing Pils, while Tomoko took the heavier black beer. And in a region of Europe that is a paradise for beer enthusiasts, I can confirm that these were the best pints we sipped on a trip that also took us through Prague and Krakow. 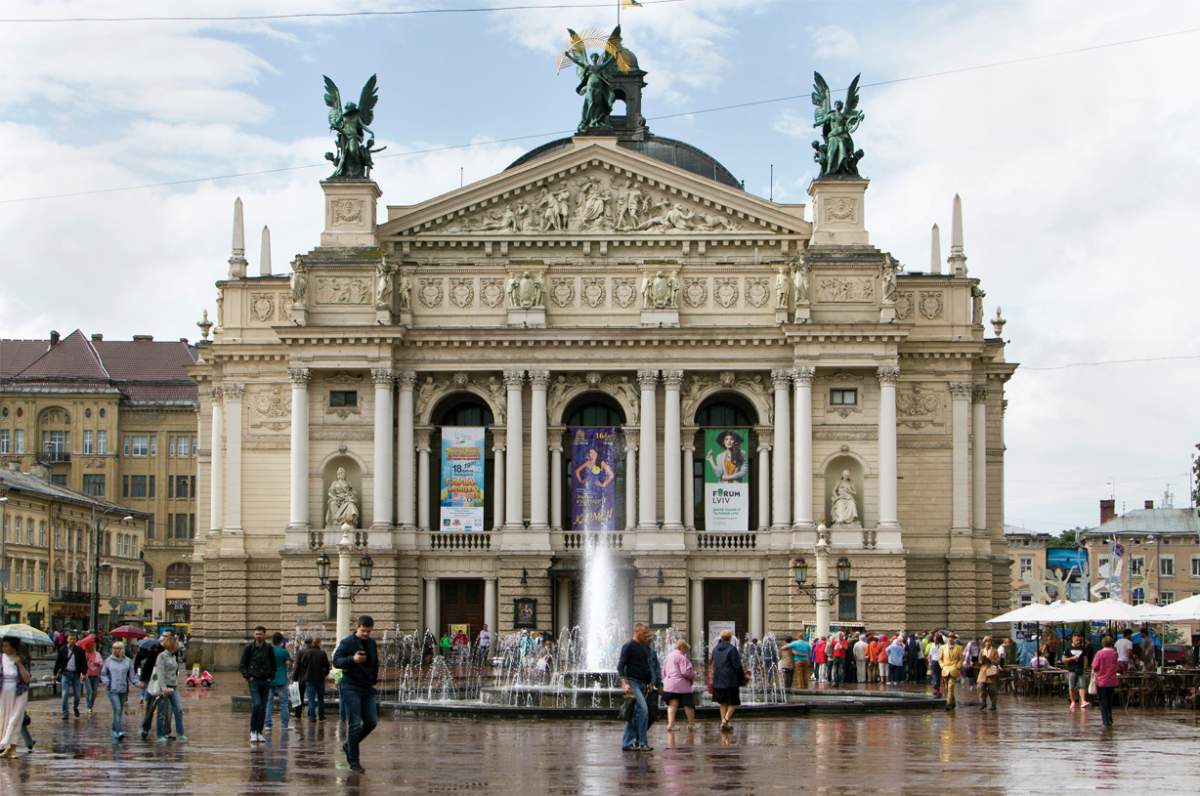 And what of the vodka, you might ask? I thought you would. Being your faithful correspondent of all things spiritual, I made a point of trying what is probably the country’s signature drink. And I was helped by a spirit guide.

We popped into a local shop to purchase a bottle or two to take back to Malta, then our home base. I was confronted by a bewildering array of shining glass, all lovingly wrapped in labels written in the Cyrillic alphabet. I take my work seriously, and so I began to decipher each one, until my wife interrupted.

“Are you going to be all day at that?”

“Of course not,” I said, reaching for a bottle of Hetman, whose name I recognized from my earlier research.

And that’s when the young shop assistant intervened.

“What are you doing?” he asked.

“I was going to buy this bottle of horlika…” I said, using the Ukrainian word for vodka. “I’d like to sample your national drink.”

He took it away from me, grabbed a bottle of Hetman flavoured with a hint of local honey and handed me that instead. 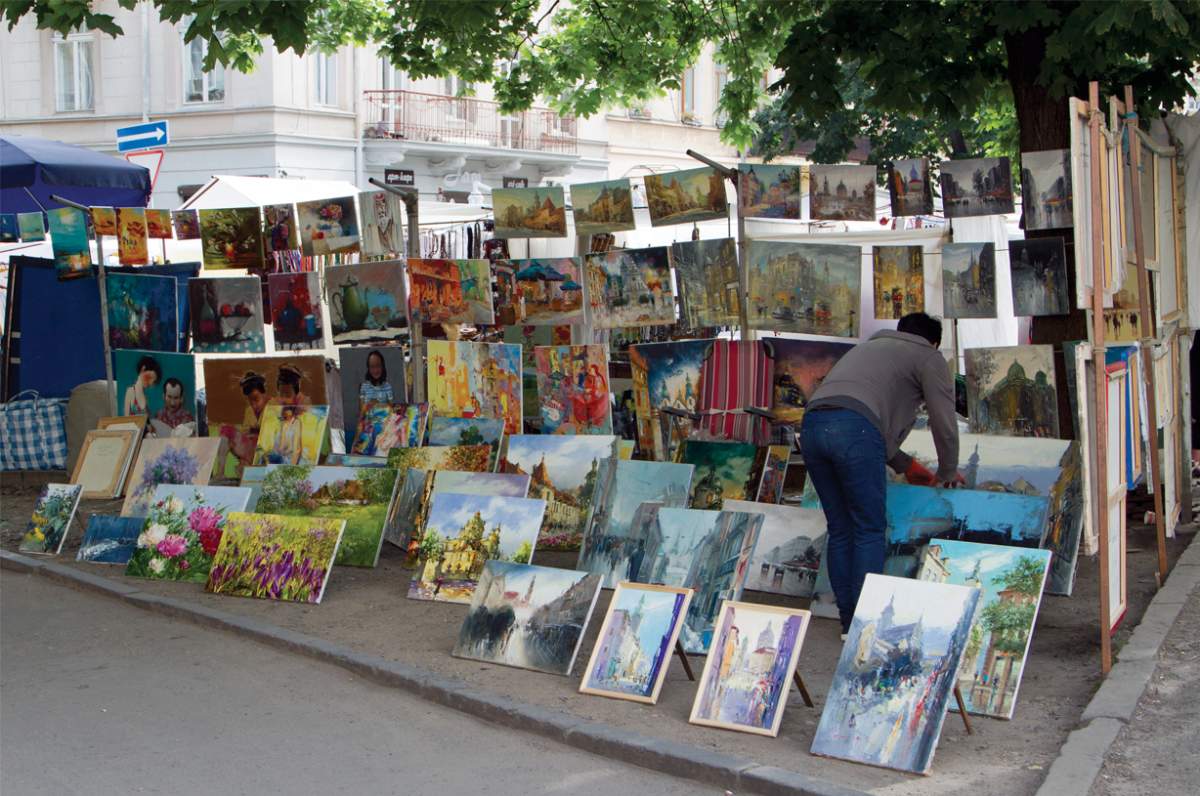 Street life in the old town.

And that’s the thing about Lviv. It’s full of great architecture, like the 19th-century palace of Count Alfred Potocki II with its lavish gilded interior, or the neo-Renaissance Opera House, one of the most beautiful in Europe. But you won’t find any incredible museums or art collections. Instead, it’s just a wonderful place to hang out, and to get a sense of what Prague or Krakow must have felt like before mass tourism.

I could see myself returning here and renting a flat to spend some time writing. But after two days of gut-busting indulgence, my innards had finally had enough.

We’d just finished a heavy Galician meal of onion pie at Kumpel and were following it with a steaming mug of chokolad z molokom—chocolate with milk—at the city’s very own chocolate factory when I had to call for an intervention.

“We really need to stop,” I said, but Tomoko went on like she hadn’t heard me.

“That’s a real block of chocolate melted into the mug,” she said. “Did you notice how rich it is?” 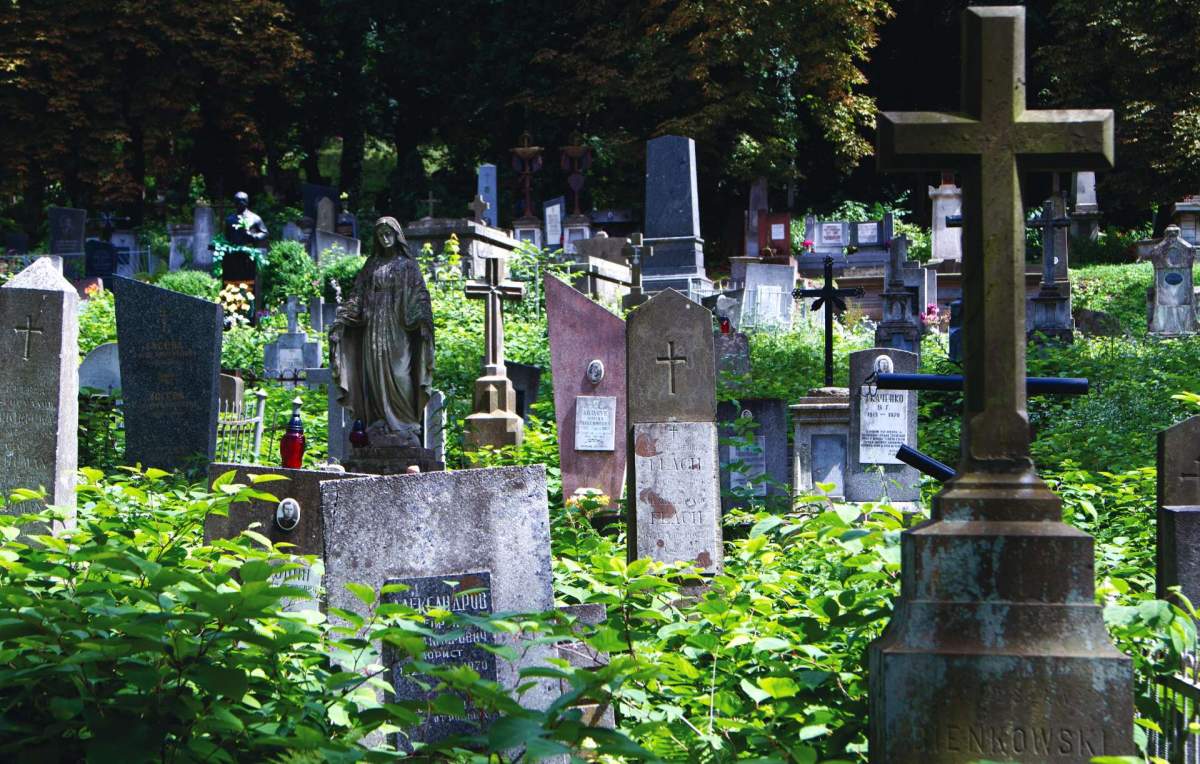 The cemeteries of Ukraine are being newly filled by the recent Russian invasion and continued aggression.

I reached across the table and took her hand. “The waistline of my pants is digging into my stomach,” I said. She just stared at me with chocolate-dilated eyes. “It wasn’t digging like that a couple days ago.”

“Oh nonsense,” she said. “We just climbed eight creaking flights of stairs to get up here. That has to count for something. Besides, it’s probably the beer.”

“Don’t you dare blame the beer,” I said, sitting up straighter and sucking in my gut. “Tomorrow we are going for a very long walk.”

The next morning, we passed through the open-air book market in the square near our flat and took a rattling tram to Lychakiv Cemetery, a 40-hectare expanse of wood and green on the edge of the old town. It’s a wonderful place to stroll amid marble personifications of sleep. The oldest tombstone dates back to 1675, and the grounds are filled with beautiful chapels and shrines, the resting place of the city’s writers and artists, politicians and musicians. 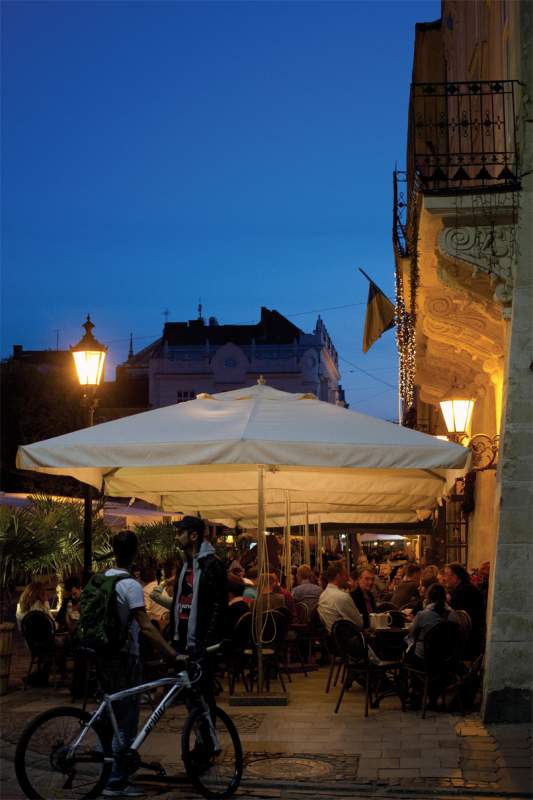 But the heavy hand of Ukraine’s present is weighing down this peaceful corner of the past. I wandered to the most distant end of Lychakiv, near the Polish War Memorial, where I turned the corner to find the heaped-up earth of a fresh grave. That wasn’t unexpected, this being a working cemetery as well as a popular tourist site. But I had stumbled across an entire field of them.

The drowsy sun-drenched feeling of a relaxing walk was replaced with confusion, quickly followed by disbelief. The air was filled with the scent of damp earth, and a cloying sweetness from heaps of rotting flowers.

On each mound, amidst the flowers and personal mementoes, someone had placed a photograph of the young man beneath, who had died fighting against the Russian invasion. To the outside world, that invasion took place in 2014, and the international news has already moved on. But several of these graves were just two or three months old.

I walked among them with a growing sense of shock, pausing to look at each photograph and to recognize the life that had been torn away, until I came across a slim blond girl in a flower print dress. She sat on one of the graves next to a bouquet of flowers that she had bought.

I watched from a distance as she took a tape recorder from her purse, and placed it carefully on the stone. And then she sang to her beloved in a quiet voice as tears trickled down her cheeks. At that moment it felt like the soul of this troubled nation was weeping because it knew no one was watching.