This history-filled slave-driving sugarcane plantation is a popular tourist spot in Cuba. But guidebooks can’t convey the horrors of what took place there.

Story and Photos by Mateo Askaripour

What happens when history, like a buried corpse, decides to stretch its skeletal hand up from the ground to say hello? This is a question every traveller must wrestle with, consciously or subconsciously, because to travel is to be an anthropologist. By packing our bags and flying off to far-flung locations, we are taking on the burden of excavating the corpses of history, regardless of whether we choose to.

At the Cuban slave plantation of Manaca Iznaga, I became an excavator—a burden that I was fully aware of as I hopped into the red-and-white convertible of a man named Angelo who agreed to take me to the former sugar plantation, a mere 20 minutes from the colonial town of Trinidad.

“You ever been anywhere like this?” Angelo asked as we made our way out of the town.

“A slave plantation, hermano. There were hundreds of them here. Owners worked them like burros, man. All for the azucar made sweet from blood.”

“Nah,” I said as I felt the Caribbean air suddenly become a bit colder. “I’ve never been to a slave plantation before.” 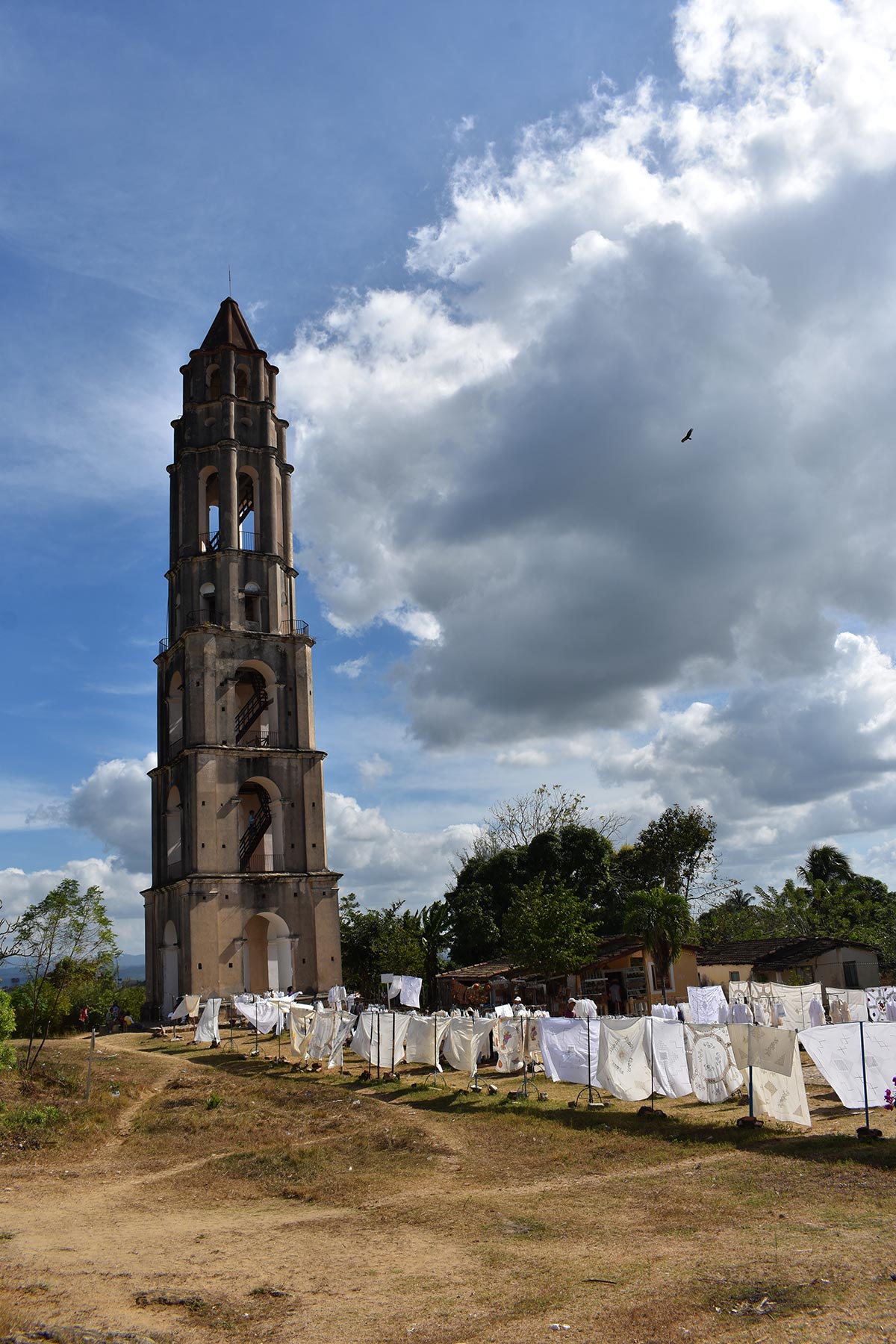 The watchtower of Manaca Iznaga.

But I felt like I’d touched slavery recently. A month before arriving in Cuba, I was in the Guatemalan town of Livingston. A town where the Garifuna people—after they were stolen from Africa, successfully revolted on their slave ship and crashed it into the island of St. Vincent, only then to be forced to leave—found refuge and began a new life. It was there that a man named Reynaldo took me to a place lined with heavy, rusted chains, chains he said were taken from the ships, possibly used for the anchors, that his people used to sail from St. Vincent to Livingston.

Before those chains, I had never felt slavery as anything more than an abstract historical tragedy that reverberates in the modern world. It was more theoretical than tangible. But there, in Livingston, when I put my hands on the heavy, rusted chains, I felt for the first time the corpses of history staring at me with outstretched hands, trying their hardest to get me to understand.

To allow me to feel how they’re not abstract, but as alive as they were hundreds of years ago. I felt an immense sadness that turned itself into a weight, dragging me down like those chains attached to an anchor.

This weight has never left me.

We stepped onto the plantation of Manaca Iznaga, founded in 1750 and located in the Valle de los Ingenios, also known as the Valley of the Sugar Mills. The plantation was purchased by the Basque Spaniard Pedro Iznaga in the late 1700s; it was this land and the slaves who worked it that allowed him to become one of the wealthiest men in Cuba. At the height of production, the plantation had 15 of the valley’s 75 mills. And while the total number of working slaves has been lost in time, a popular estimate says there were anywhere between 11,000 and 30,000 of them toiling in the valley and surrounding sugarcane plantations. 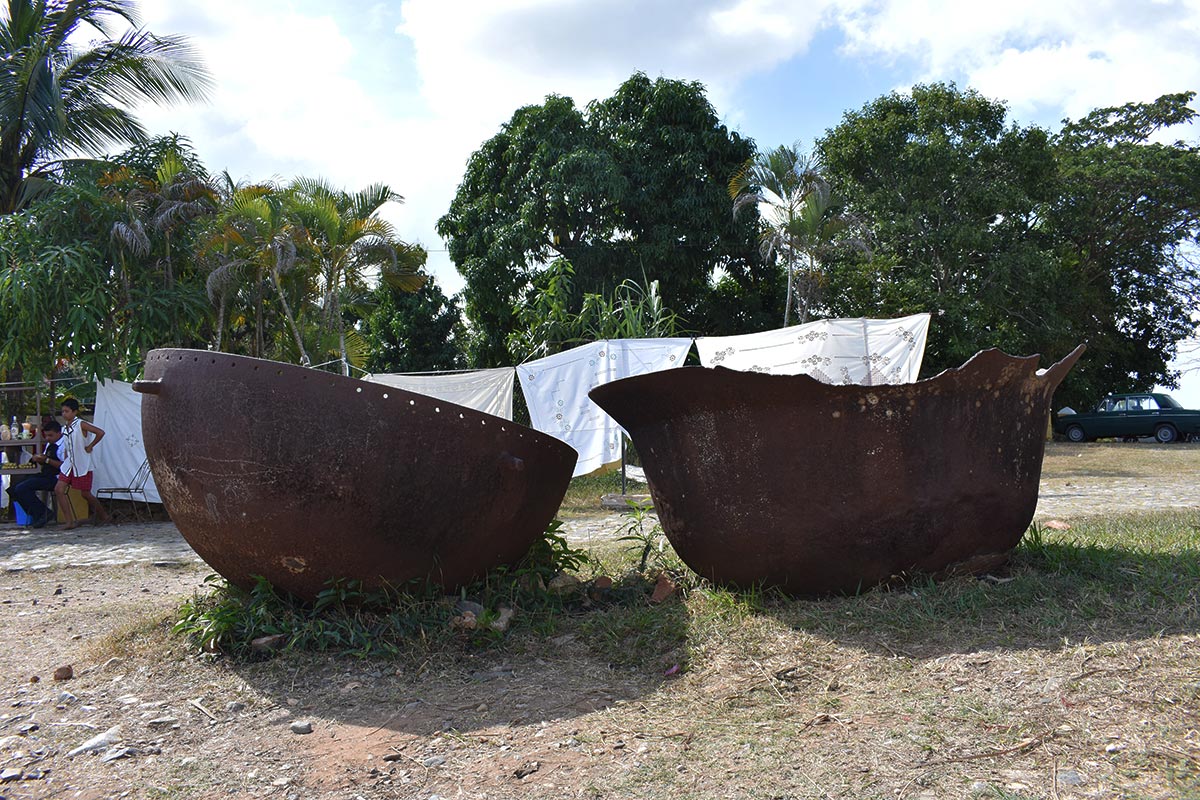 “Look at this,” Angelo said as he pointed to an oxygenated bell engraved with a few words in Latin and the year 1846. “This is what the masters used to ring to tell the slaves to get to work, when to eat and when to end their day,” he explained. “It used to hang all the way up there”—he pointed to the worn tower standing erect in the middle of the property.

The sight of the bell added to the weight I felt from Livingston. I thought I could hear it, clinging and clanging as humans were treated as less than cattle; made to dig, pick, squeeze, pull and lift all they could in the hot Cuban sun before passing out from exhaustion.

Angelo must have noticed my fixation on the tower. “Don’t worry, we’ll go there soon enough. It’s tall as hell, right? Forty-four metres. Seven stories. Made from lime and sand. Those Iznaga bastards said they built it so high so they could watch the slaves, but many think it was all about their ego, you know?” 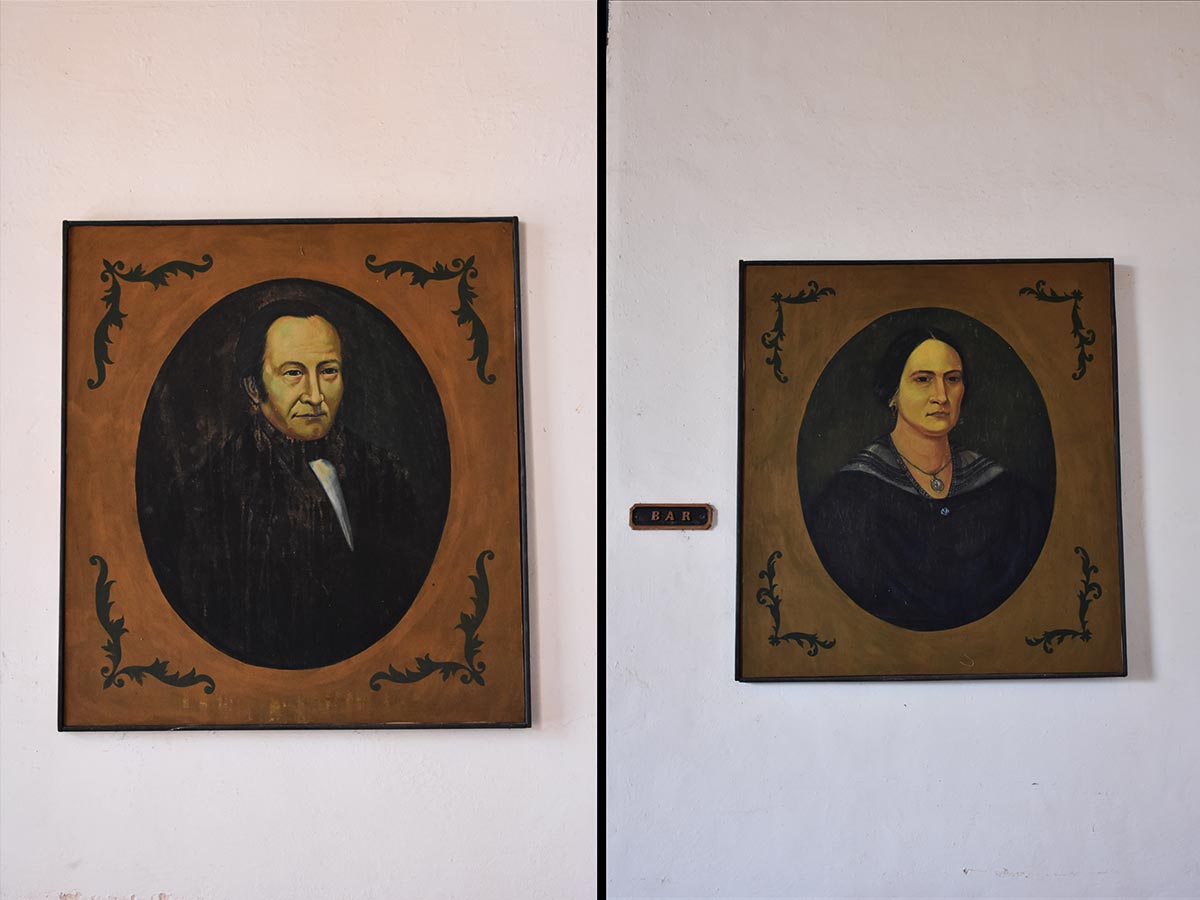 Pedro Iznaga and his wife.

From the bell, we made our way into the home, which featured two paintings: one of Pedro Iznaga and one of his wife. Pedro—dressed in what was likely the height of aristocratic fashion, with slicked back hair and a black jacket that exposed only a sliver of his clean white shirt—looked as if he were almost smiling. I had to get closer to see it, but his expression was almost imperceptibly smug. His wife, on the other hand, was clothed in what looked like a shawl, exposing her neckline and a large jewel hanging above it. On her face, she wore an expression that struck me as equal parts grimace and confusion.

We headed for the tower.

The cost to enter the tower was $1. And as we ascended the 184 steps of the of the building, more of the plantation came into view. Fields stretched for miles, and there were large holes at each level of the tower to allow a 360-degree view of the surrounding area. There were little homes with colonial-style ceramic tiled roofs and, beyond them, large clearings of unfarmed land that were where stalks of sugarcane as far as the eye could see grew. Power lines crisscrossed palm trees and I could make out clouds casting swollen shadows onto mountains in the distance. Did slaves run toward them in hopes of escape?

I was taking my time, doing all I could to remain rooted in the moment, but at some point, I slipped and fell into the past. 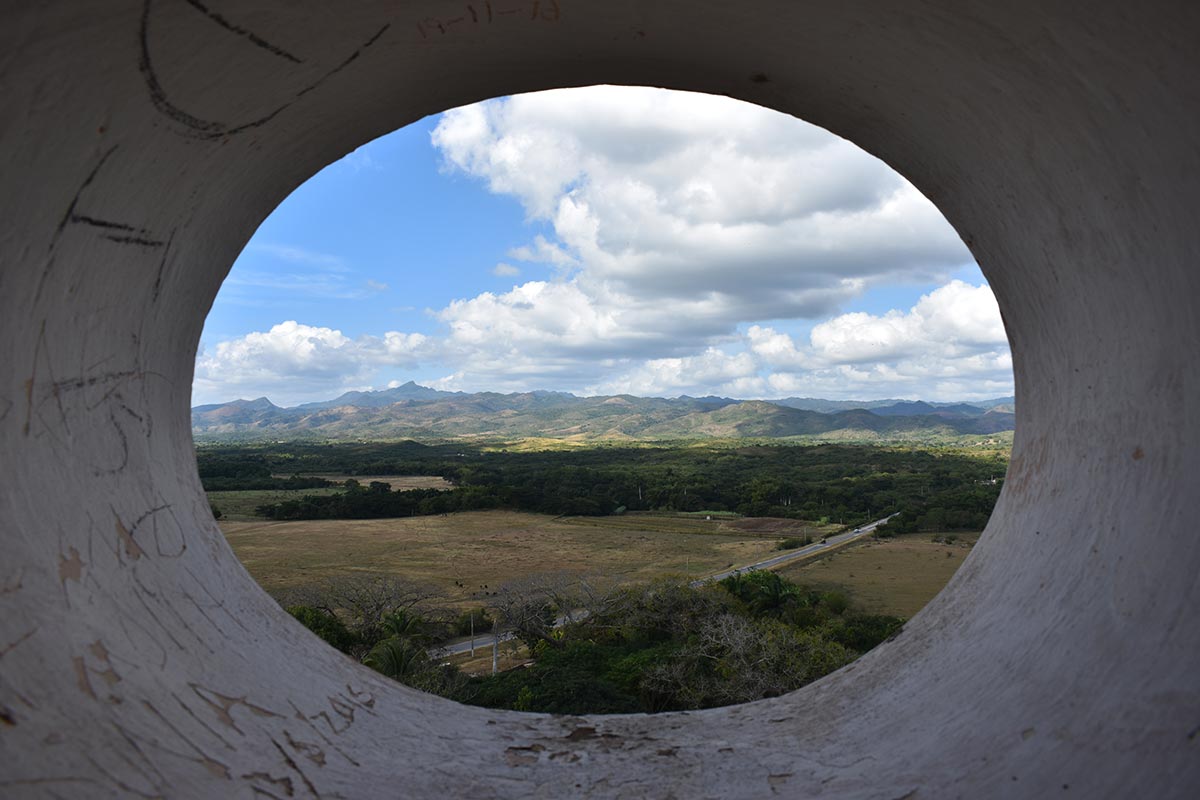 Guards could see for hours into the fields below.

As I stared off into the fields, still bearing lines partitioning them from each other, I saw ghosts. Ghosts with slick black backs, glistening in the sun, and bloody fingers hacking and hacking at raw cane. The weight was too much to bear, and all I could do was press my hands against the tower of lime and sand, close my eyes and breathe. The question of why rang throughout my body like the tower bell from 1846, doing its best to summon an answer from somewhere inside of me. But the only answer that made itself audible was, “Because they could.”

Lonely Planet’s description of Manaca Iznaga borders on asinine. “Today you can climb to the top of the tower for pretty views, followed by a reasonable lunch (from noon to 2:30 p.m.) in the restaurant-bar in Iznaga’s former colonial mansion,” it says. “Don’t miss the huge sugar press out back.”

The views are anything but “pretty.” They’re haunting.

To travel is to excavate, but with this responsibility comes a heavy burden. A burden that most would rather shrug off than accept. Because to accept this burden is to see corpses in the streets of some of your favourite cities. To see hollow skeletons with outstretched hands at “must-see sights,” who, unlike their living countrymen, aren’t asking for money, but just acknowledgement that they were there, and still are.

Mateo is a writer who quit his flashy job in New York City to live life on his own terms. He’s done everything from working at an orphanage in Nairobi to building a new university in Abu Dhabi to sleeping on volcanoes in Guatemala. And right now, he’s working to get his novel published. Regardless of where he is, he’s always working.

Peru: the Lost City of Choquequirao