This is a guest post from Tan Your Mind, Outpost’s web series in Thailand. Click here to see more.

We left Baan Dam (the Black House) hungry. As we contemplated eating in one of the small surrounding restaurants, Sue spotted coconuts for sale. To hydrate against Chiang Rai’s roaring noon heat—which has the tendency to boil you like a sticky, spicy, sweet, oily bowl of Tom Yum—we each picked a baby coconut and slurped its silken milk in seconds, not stopping even to savour it.

When our dehydrated wits returned, we became cognizant of a dizzying aroma of smoke—barbecued meat and sweet sauce!—which beckoned to us like a siren’s call as it curled up from behind a wall of coconuts and lingered under our noses. We surrounded the grill and its master, having lost all sense of our personal street-meat histories.

Indeed, under the power of pork lollipops that were nearing completion, it was hard to summon a remembrance of past experiences wrenching from putrid street meat, mouth kissing the toilet for days. Then broken from the barbecue’s spell, I looked to see Sue also hesitating. Our photographer—who once had a debilitating bout of giardia when climbing a mountain in Nepal—immediately ordered two. The vendor passed him the lollipops, which were wet with some sort of heavenly glaze, and he took his first bite.

And with that, four skewers were placed on the grill. Then four more. Then four more after that. And four more after that. Once the lollipops were done, popping and sizzling to perfect tenderness, they held a party in my mouth. The meat was fresh and delicate, the sauce tangy and sweet.As we hung around the stall, our pile of leftover sticks almost robust enough for a popsicle house, the vendor and pork-lollipop mastermind, who we’d come to know as Apple, looked on with the adoring eyes of a patriarch who has fattened up his children.

Apple, we learned, was no ordinary vendor who came to Chiang Rai one day just to set up shop. Thawan Duchanee (a renowned national artist as well as creator of the Black House) once sampled his ware, and like us became enamoured with their otherworldly taste. Then actually asked Apple to set up a stall just outside the Black House so he could have them every day!

Even after his passing, Apple’s esteemed position remains. He shows up daily, pork lollipops in tow. If you visit Baan Dam, you must go; he is right by the main building. If you can’t find him, simply follow your nose. 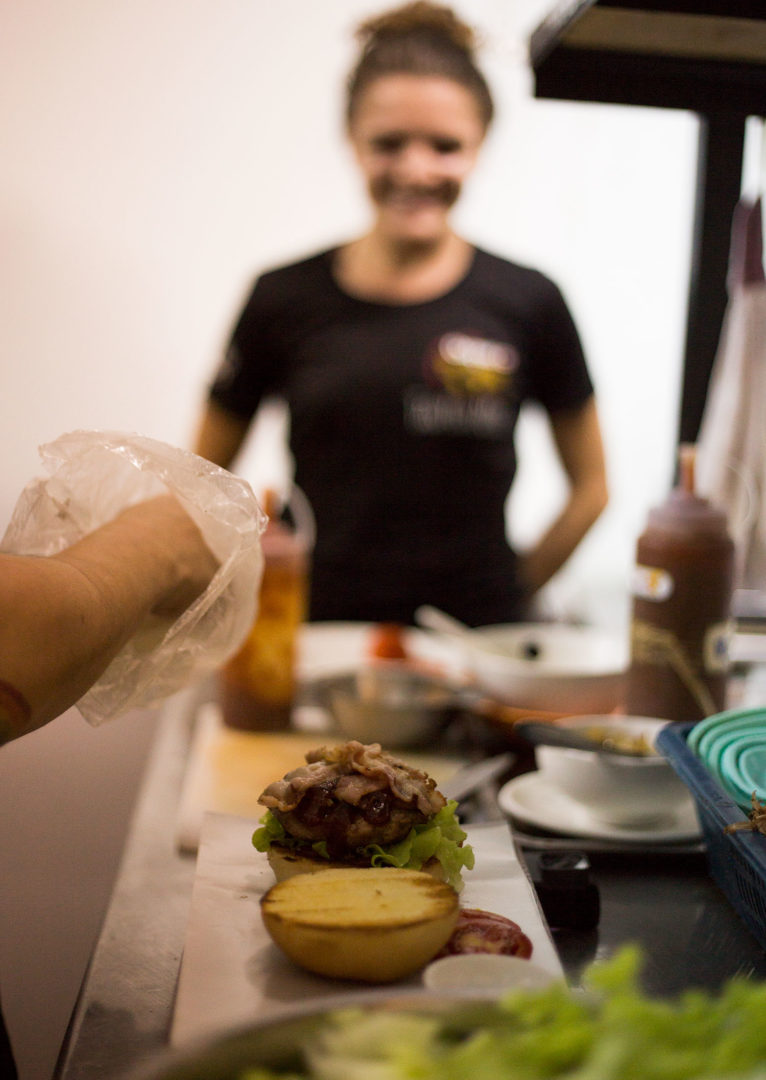 A burger made with love, from Dreamer Cafe in Lampang.

Despite the copious amounts of pad Thai, Tom Yum soup, coconut chicken soup, and green curry we devoured during our time in Thailand, I think we were unanimous in our conclusion that our favourite dishes came from the most unexpected places. From the unexpected “best burger” we all had ever had at Win’s Dreamer’s Cafe in Lampang, to the surprisingly delicious train green curry given to us by Khun Ya Poon (Grandma Poon), there are a world of flavours in Thailand beyond pad Thai—and ironically for us, they all came from places we initially questioned.

My philosophy is simple: you can get sick anywhere. I’ve gotten sick from a five-star Italian restaurant in Toronto, but been absolutely fine after a quesillo (cheese tortilla with sour cream) produced out of a mop bucket in a plastic bag at the Nicaraguan border in sweltering noon heat.

There’s something to be said for paying attention to how busy a street vendor is, and if the food looks appetizing and properly cared for. But there’s no time to fear Montezuma’s revenge or Delhi belly when travelling (anyway, there are pills for that these days)—you’ll miss out on some of the most amazing cuisine you’ll ever have!