The Mayans Created Star Wars?! It’s amazing what you can learn when travelling … like, the involvement of the ancient Mayans in Star Wars?

It’s likely happened to all of us on occasion during our travels. We’re in some strange city or distant land when we suddenly stop, scratch our head and look around. Something looks very familiar. I’m not talking about our first glimpse of the Eiffel Tower or the Pyramids, but somewhere less iconic yet almost as familiar as the world’s great sites.

Was it a photo from a guidebook? A screensaver on our computer? A poster on the wall of a classroom in our dim and distant past? Is it just de ja vu? Sometimes we never figure it out, and then sometimes it comes to us months or even years later as we are watching a TV show or movie. 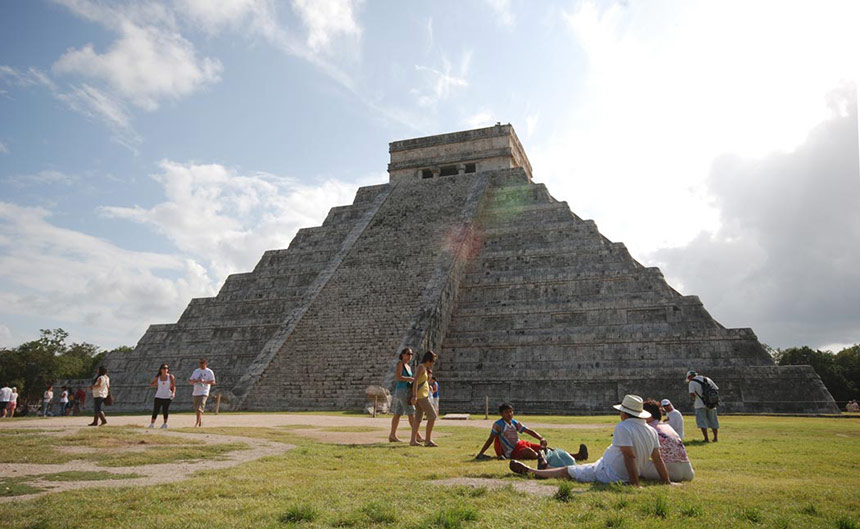 “I’ve been there!” we shriek, as those around us—especially if in a cinema—look at us first askance, then with anger and finally with dramatic ‘shhhhhhhhh’s or perhaps even thrown popcorn.

Movie and TV locations can pop up in our travels in the least expected of spots. Sometimes we really ought to know that a particular spot was used in a movie—like Thailand’s famed Ko Phi Phi Leh in The Beach—but other times we’re really caught off guard.

Some years ago, a friend visited the great Mayan ruins of Tikal in Guatemala. The entire city once covered an area of more than 16 square kilometres and was home to thousands of buildings and structures. Although not all of the city has survived, it’s still a vast and massively impressive complex even today. As with any of these ancient sites, strolling the manicured lawns between the largest buildings and observing the highest pyramids looming up above the endless surrounding jungle is rather awe-inspiring, but for my friend, it was doubly-impressive.

As he is a massive Star Wars fan, I would hazard a guess that its role in George Lucas’s work probably impressed him far more than the sophistication and brilliance of the Mayan people!

It’s not uncommon for movies to be filmed in unusual places. A few minutes walk from my home there’s a local community building that was used as the NYPD station in Al Pacino’s Sea of Love. The film isn’t a particular favourite of mine, but it is for many other people as I have discovered when I’ve casually pointed it out to overseas visitors. As with most movie locations, there’s no historical plaque on the building attesting to its fleeting fame: either you know it (or someone tells you about it), or you don’t. But if the movie is famous or just one of your favourites, it can be a cool bonus to your travel, like my Star Wars mate’s discovery!

If you’re too lazy to do the research into movie locations yourself, some cities offer movie and TV tours. Tours of the stars’ homes have always been big sellers in Hollywood and Beverly Hills and although I get the impression that you don’t see actual celebrities very often, you do get to gaze wistfully at the large gates and towering walls that surround their compounds for a few hours.

New York has been home to thousands of productions over the years (when Toronto hasn’t been filling in for it!), but arguably the most successful show business tours have been those for Sex and the City which walk and/or drive around the Big Apple stopping at the places the characters lived, worked, shop or ate. Despite the show’s finale having aired years ago, the tours still attract dozens of keen fans every day. Atlanta offers similar tours for The Walking Dead and there are Harry Potter offerings in London.

They might not be quite as cultural as a visit to an art gallery or museum, but travel should be all about fun, so why not go for it?

Tours like these can be great fun if you have a free morning or afternoon but they’re not the only variance on the old-fashioned hop-on/hop-off city tours that many of us have either stridently avoided or eagerly taken over the years. And specialty tours can also be a great way to see obscure corners of a city that we would never otherwise have visited.

There are some truly great ghost tours which, even if you don’t believe in the supernatural, can send plenty of shivers shooting up your spine and goose-bumps coursing across your arms. There are crime tours that follow in the footsteps of Jack the Ripper and other undesirables, and literary tours that trace the movements of authors and characters. For gourmets and gourmands alike, there are culinary tours that often begin in markets and end with a cooking lesson and a great tasting, and tours of famous sports stadia.

Even if you are a truly independent traveller who eschews groups and likes nothing better than a quiet wander in solitude, there’s probably a tour that would appeal to whatever eclectic interest floats your boat wherever you may go…even including kayak tours of Venice!

How to Give for the Traveller: Your Ultimate Travel Gift Guide