Time to Meet Your Maker | My First Ultramarathon

Of the 105 solo runners at the MYM ultra-marathon in Whistler, B.C., only 75 will cross the finish line. Will Rob Brodey be one of them?

The canopy of old-growth forest blurs by overhead, as I shuffle along one of British Columbia’s famed single-track mountain bike trails like a man 40 years my senior. My breath is deep and slow, my heart knocking steadily at my ribs like a metronome. No use pushing too hard, I coach myself. You’ve only covered 12 kilometres—and you still have another 70 to go, not to mention the 3,500 metres of ups and downs left to tackle through Whistler’s rugged terrain.

A man passes me on the snaking alpine trail like a Porsche on the autobahn. So what, if I move at the pace of a beat-up Lada? I want to call after him that I’m from Ontario, where there are no (real) mountains to train on. And it’s true.

The Meet Your Maker 50 Mile Trail Ultra + Relay (MYM) is an ambitious undertaking, considering I come from a relatively flat province, and the longest I’d ever run before signing up was a paltry 21 kilometres. When I arrived in Whistler and the clouds finally lifted, revealing the scale of the mountains to be climbed, I nearly hid under my bed in fear. A DNF (did not finish) designation suddenly became a distinct possibility. 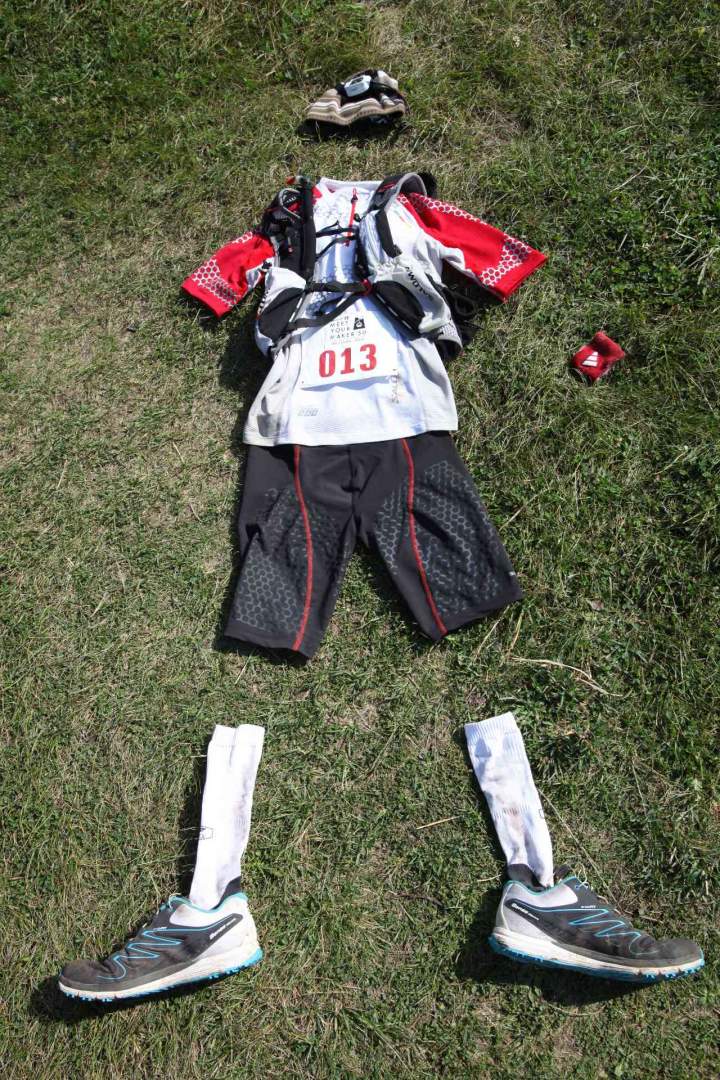 Launched in 2012, MYM is a one-day affair that starts at 5 a.m., with seven legs ranging from eight to 21 kilometres. Each checkpoint (CP) not only has medical staff, snacks and water to ensure our survival but a clock with a cut-off time. Miss a cut off and you’re pulled from the race. This year (2013), there are 105 competitors racing in the solo category and 33 teams in the relay. 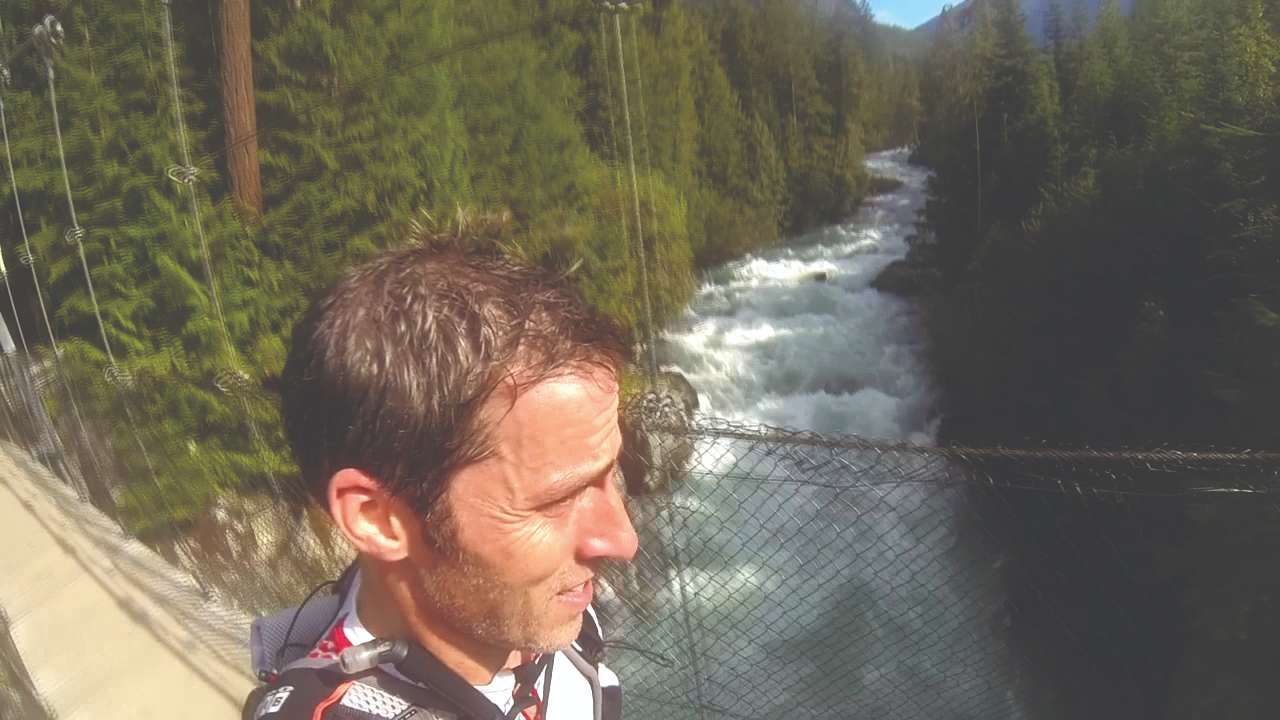 The author/marathoner mid-run, via selfie.

“This course has everything in it,” Chris Kennedy, the course manager, told me, who I met the previous night, as he was planting one of several thousand flags over the route to keep us from getting irretrievably lost in the wilderness.

“By the end of the race, you will have experienced the best of the area’s geography.”

As a bonus, half way through the race, we get to take a four-kilometre ride on the Peak 2 Peak gondola that spans the Fitzsimmons Creek between the mountains of Blackcomb and Whistler.

Around 18 kilometres in, having passed through CP1 with plenty of time before the cut off, I patter along what feels like a dirt-road roller coaster. It’s actually the longest single-track mountain bike trail in Whistler Valley, aptly called Comfortably Numb, which includes 441 metres of climbs and 295 metres of descents.

Soon, I’m running behind an Albertan named Clarance Howatt. At 53 years old, he represents the kind of avid runner that comes out to experience something like MYM. His pace is perfect, and as we talk time flies by.

“Don’t think more than a few minutes ahead,” he says, offering up his first piece of trail wisdom. Then, with each passing kilometre, Clarance imparts more gems. “Just because you might feel like crap now doesn’t mean you’ll feel that way for the rest of the race. Who knows, in ten minutes, you might feel great again.” On his hotel mirror, he had taped a note that read “Not today.” He goes on to recount the story of a motivational speaker who had hit rock bottom personally and financially, and used those words as inspiration for not letting himself fail again. 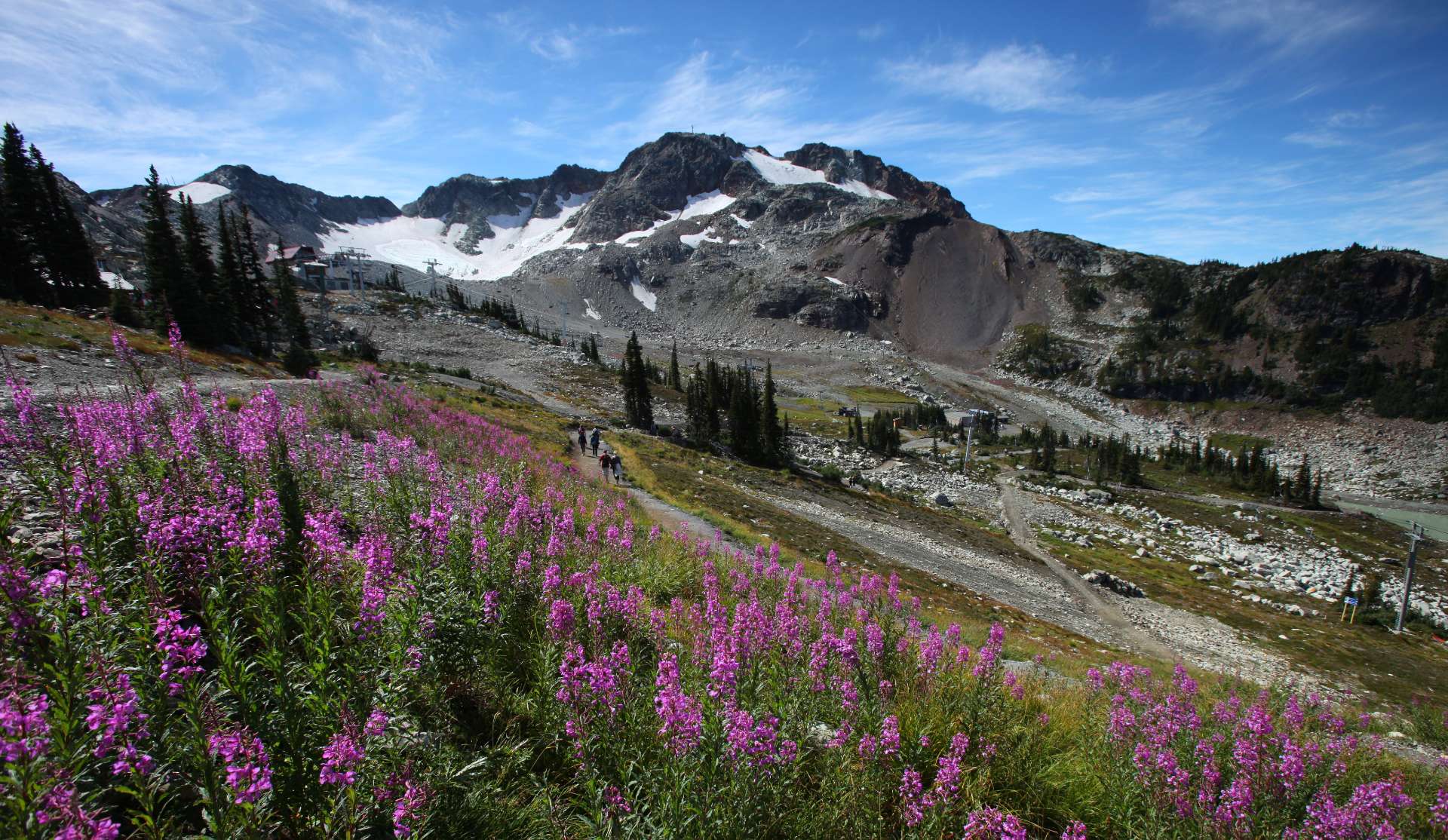 The breathtaking landscapes near Whistler.

We discuss the idea of the ultramarathon as a kind of hero’s journey. The village may be supporting you, but you still have to head out into the wilds and battle it out on your own. This seems appropriate because soon he stops at a water station and wordlessly, we part company. Once again, I’m alone in the wilderness.

It’s smooth sailing into CP2, sitting a short way up the ski slopes of Blackcomb. I refill my hydration pack and eat a cookie before I’m off again. Now I’m faced with a 1,153-metre climb to the next checkpoint, which starts so steeply it feels like I’m scaling the cliffs of Gibraltar. Even with all the effort, I can see that trail running is an ongoing conversation not only with the landscape but with my body and mind. I’m constantly adjusting effort, technique and my attitude to what I’m experiencing.

At midday, I arrive at the top of Blackcomb and hop on the Peak 2 Peak gondola that’ll take me across to Whistler. Dangling 436 metres above the valley floor, I wolf down what I can and stretch my legs, while taking in the stunning view of the surrounding summits and cascading ice fields. Then, just as I begin the fourth leg of the race that will descend 1,113 vertical metres in 7.8 kilometres, my stomach starts to cramp. I’m forced to walk sections of the downhill to dampen the circus in my belly. 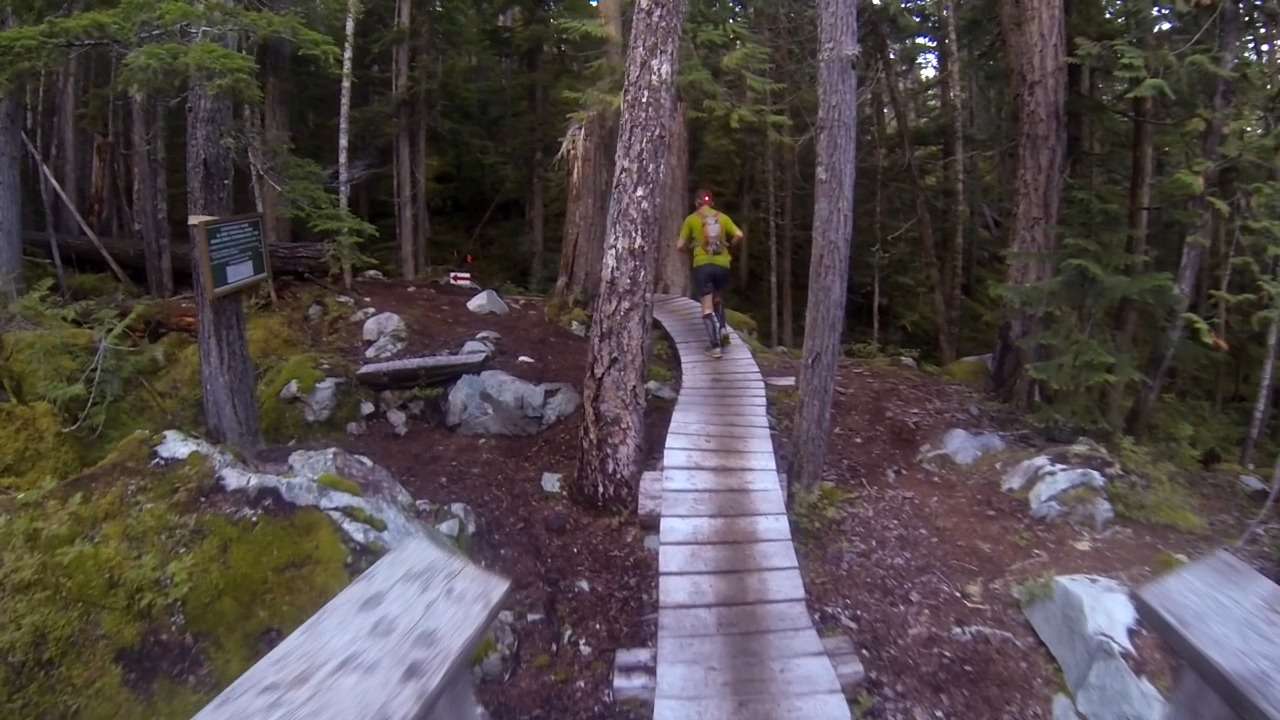 On the run in the race.

As I continue on my way down, I imagine the other runners moving over the trail like ants. It seems we all have our reasons for tackling a challenge of this magnitude. Patrick Fulton, a geophysicist from Santa Cruz, California, who came to Whistler for MYM, finds the inspiration for long-distance trail running comes from a desire to experience more remote places the further he goes.

“Some people go to church on Sundays, I go to the mountains,” he tells me. Kyle Graham, on the other hand, had wanted to try competing in an ultra one day but quickly realized, “Tomorrow may never come, so I better seize the day.”

I arrive at CP4 at the base of Whistler Mountain feeling renewed. By now my legs should be trashed, but they feel surprisingly fresh. Yet no sooner have I started uphill on the next leg that a terrible nausea grips me. My pace slips to a crawl, and this is when I become fully aware of the dangers of the mind, as it whispers to me that I can’t go on, that the goal is too ambitious, that I’ve already succeeded just by trying. 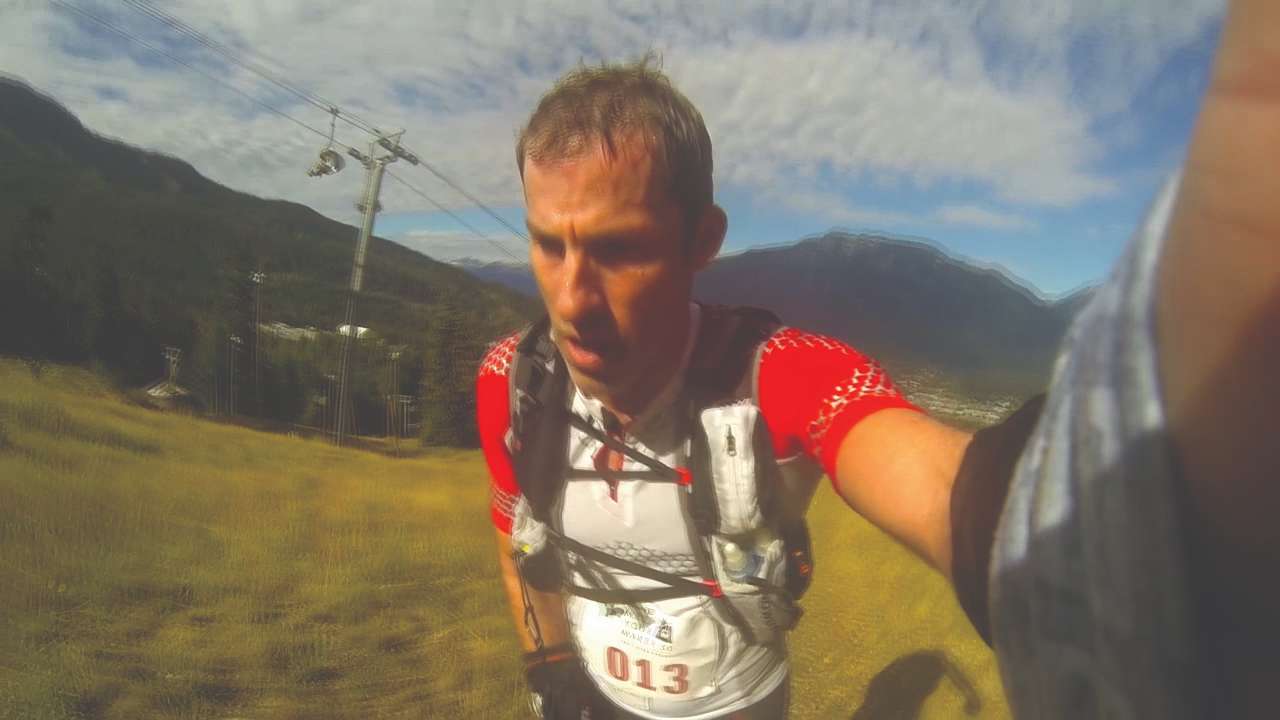 Sticking it out, full throttle.

As I move forward through the posh neighbourhood of Kadenwood, with its multi-million dollar homes, I fall back on Clarance’s sage advice of not thinking beyond a few minutes at a time. So I stay focused on my breathing to calm the tempest of nausea and clear my mind of those annoying dust bunnies of doubt. A mantra takes shape in my mind: move until I can no longer move or an official pulls me off the race course. Period.

A Vancouver woman in her fifties, who is a role model of how to kick ass through the middle years, offers me some ginger to calm my stomach. I take the pill and some electrolytes and continue dragging myself along the course. More and more people pass me. In time, the nausea recedes, and I’m able to pick up my walking pace, moving with a stronger sense of purpose. With time winding down on the next cut off, I muster the jam to run.

The nausea of leg five gives way to the terrible grind of the next section, which starts with a 400 vertical metre climb along switchbacks. There are enough false plateaus to psyche out an MMA fighter, and now I’m cursing aloud, questioning why I flew across the country to do something as insane as this. I see an ant slowly crossing the trail and think, I know how you feel. 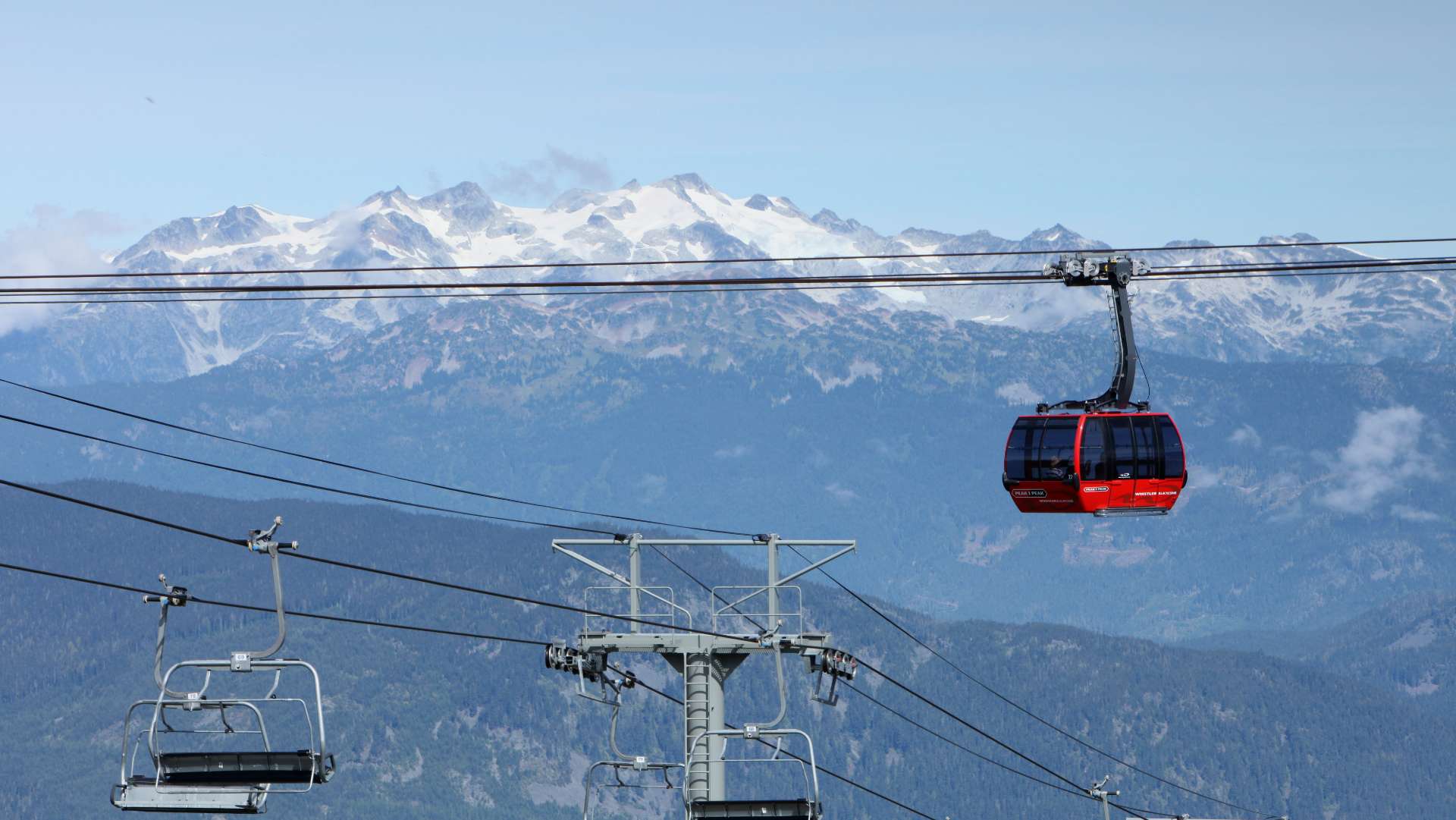 There is a psychological benefit of having a cushion between you and the time cut off, but I don’t have one anymore, and I’m getting stressed out, because I have no idea how much further I have to CP6. I try to quell the defeating narrative in my head, so I repeat Clarance’s words, “Not today!” According to my watch, I only have 15 minutes left to make the next cut off, so I decide to run.

If I give it my all and don’t make the cut off, I reason, then the race will be over and I can rest on the drive back. At the bottom of a long hill, with only five minutes left on the clock, I see the checkpoint, which I imagine as the last gate before the finish line, a mere 10.4 kilometres down the way. My arrival at CP6 is encouraging, and I splash down a ginger ale, pour some water into my flasks, and keep going.

I do a walk/run through the forest and then through the residential neighbourhoods of Alpine Meadows. Every few minutes someone calls out, “You’re doing great! Only five kilometres to go!” After a few more minutes, the encouragement is throwing me off. 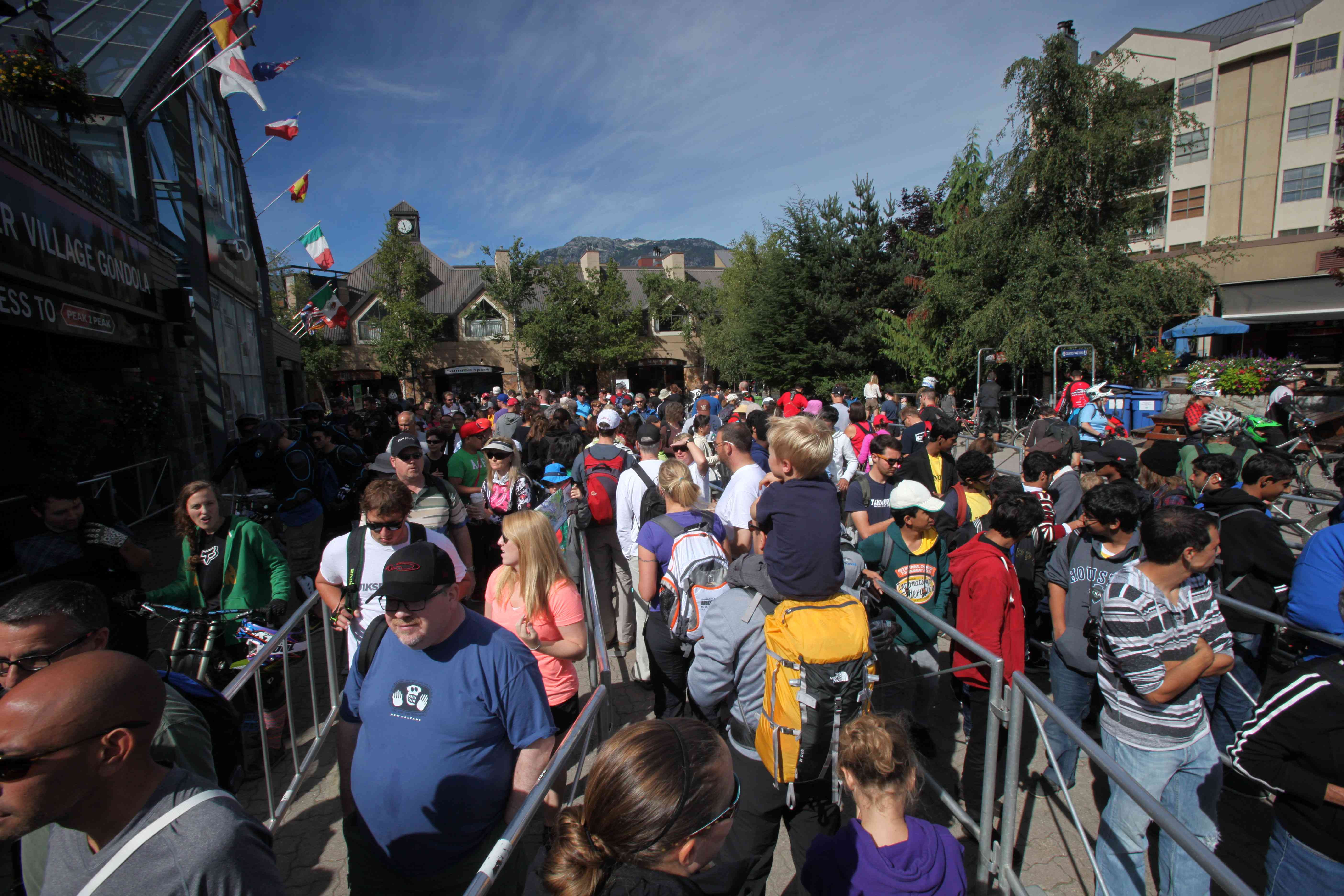 How could there only be five kilometres left, if it was five kilometres 10 minutes ago? I catch up to two other runners but quickly realize we’ve been running for a kilometre in the wrong direction. I hurriedly double back and find the missed turn off. But now I’m frazzled and daylight is waning as I head into the woods.

After countless minutes running through the darkness, I hear the crowd cheering from deep within the forest. I’m pumped and pick up the pace until I see a lit baseball field through the clearing where the cheering is coming from. I feel deflated and walk, before my inner voice encourages me to keep running.

Clearly, I’ve become an emotional yo-yo. Then, just when I think the forest is never going to yield the finish line, a race official emerges from the shadows. “We’ve been expecting you! Come on!” And so it is that I’m escorted like a returning hero for the final metres to the finish.

Fifteen hours after it had all begun, I have met my maker and lived to tell. ♦

Why Southeast Asia is Perfect for Your First Big Travel Adventure

Whale Up Close | Travelling the High Seas as a Deckhand