For this former American Marine, a trip to Vietnam meant confronting more than just cultural differences.

My wife, Iryna, once told me that as a child growing up in the Soviet Union she always had the feeling that the Great Patriotic War—which most of the world refers to as World War II—had just happened.

Having spent a few ninths of May in Kyiv, watching parades of ever-thinning ranks of veterans sporting blazers heavy with medals in commemoration of the Soviet victory over the Nazis, I understand what she means. As a people, the residents of the former Soviet Union pay a cultural homage to the Great Patriotic War that I, as an American, found jarring but somehow familiar. Like hearing one of your favorite stories told from a different character’s point of view.

In my travels, I’ve found that all nations’ collective memories of war have this same quality. From a Nigerian friend’s description of the Biafran War, to my Ukrainian in-laws’ reminisces of the Soviets in Afghanistan, there is an unsettling familiarity to these conversations. A universal acknowledgement that war is impossible to forget, hard as hell to honestly remember and infused with a self-centered logic that encourages a people to honour their own and disregard all others. 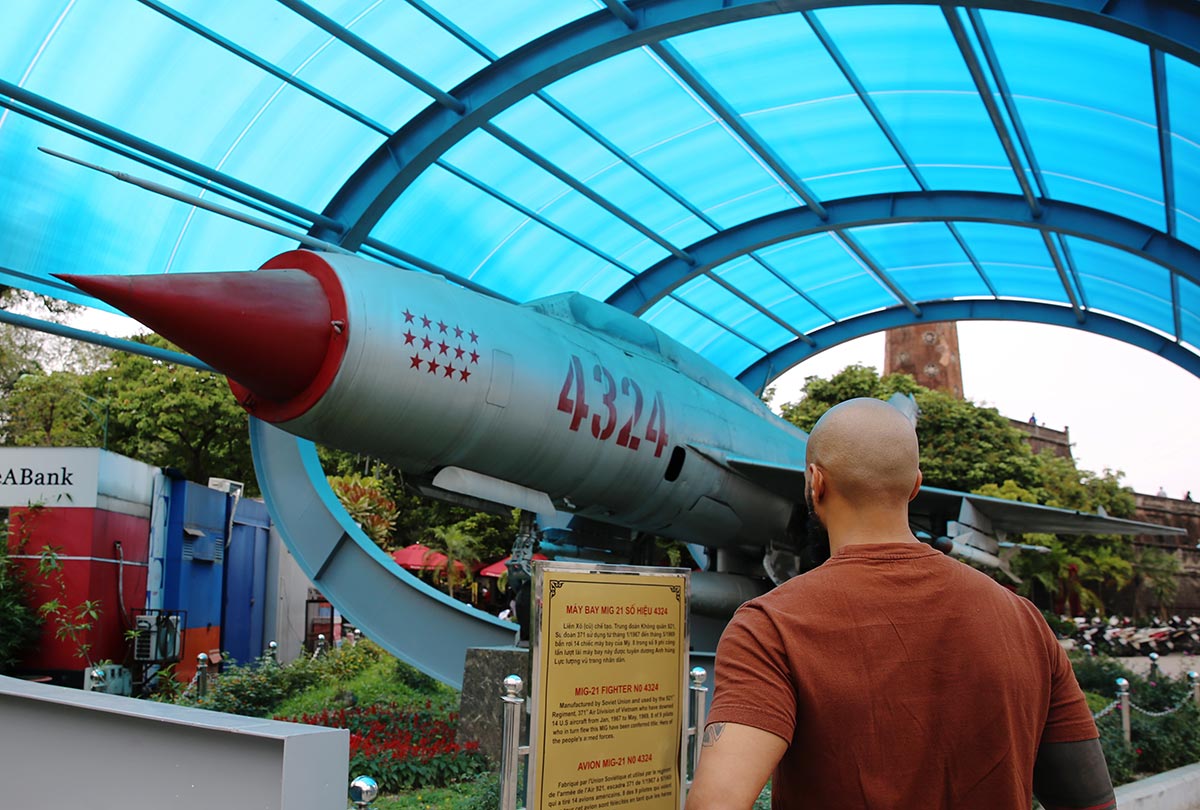 The author in front of a Soviet-built MiG-21 fighter jet.

I visited Hanoi with a pretty specific brand of this self-centered logic. As a US Marine in the late ’90s, I sang running cadences about the Vietnam War. I doubt any of us boys in our late teens actually knew anything about Mr. Ho Chi Minh aside from the fact that, according to the drill instructor running to the left of our platoon, he was a “son of a bitch with the blue-balls, crabs, and the seven-year-itch.”

Before enlisting, I spent long hours of my early adolescence poring over every American film associated with the Vietnam War. I was fascinated by the strained and brutal solidarity between the black and white troops in the bush, the random terror of booby traps, the chilling efficiency of the silent (always silent) black-pajamaed Viet Cong stalking the Americans in triple-canopied jungles: all the way from John Wayne’s propagandish wet dream Green Berets, to the Hughes Brothers’ subversive and underappreciated Dead Presidents. And this fetishization of the Vietnam War was far from uncommon for my generation—hell, I challenge you to find a living US Marine who has not memorized every scene in Full Metal Jacket.

Now, compound all that cultural baggage with a childhood of sitting at the feet of my father and uncles, enthralled by their descriptions of the war and the Americans who fought in it, and you’ll end up with a pretty good idea of my specific self-centered logic. For me, Vietnam was never a country. It was a war.

In Nothing Ever Dies: Vietnam and the Memory of War, Viet Thanh Nguyen posits that “if you want to understand how a nation wants to remember a war, look at their monuments to it.” I spent a good chunk of my time in Hanoi at the Vietnam Military History Museum and Hoa Loa Prison testing Nguyen’s hypothesis.

It is a blow to the American ego to understand that Vietnamese military history did not begin with us. My self-centered logic propelled me through the sections of the Vietnam Military History Museum devoted to the French Occupation and the wars with China, but not before noticing the unmistakably gutsy tone. A moxie that I recognized from locals as far flung as Grozny, Baltimore and Mogadishu. The type of swagger that Christopher Hitchens referred to as “the defiant spark of craziness a people get if they’re sat on too long.” 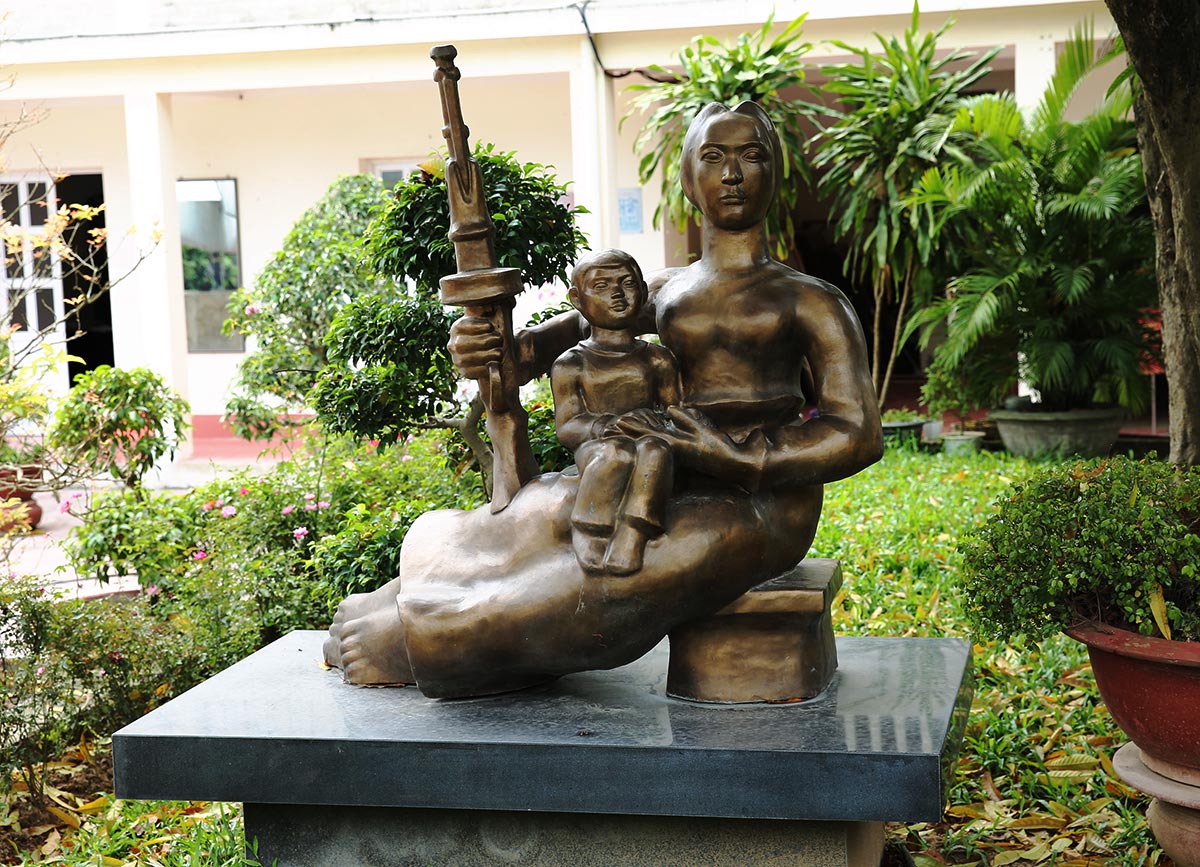 I say this with a full appreciation of the fact that among the members of my tribe, the American left, there is a dangerous tendency to paint those who have opposed the United States’ worst ideologies with a heroic brush. I suspected my visit to Hanoi’s Hoa Lo Prison—the infamous Hanoi Hilton, mythologized by Lionel Chetwynd’s 1987 film—would temper this inclination.

My first impression of Hoa Lo was another gut-shot to my American ego: the French jailed Vietnamese opponents to colonial rule in Hoa Lo far longer than North Vietnam imprisoned American POWs there. Chetwynd’s movie not only intentionally obfuscates this fact, it even has one of the North Vietnamese jailers rant to an American POW about French prisoners being held at Hoa Lu.

Nope. Not one. A complete lie, and a good illustration of the danger of relying on Hollywood for history lessons. 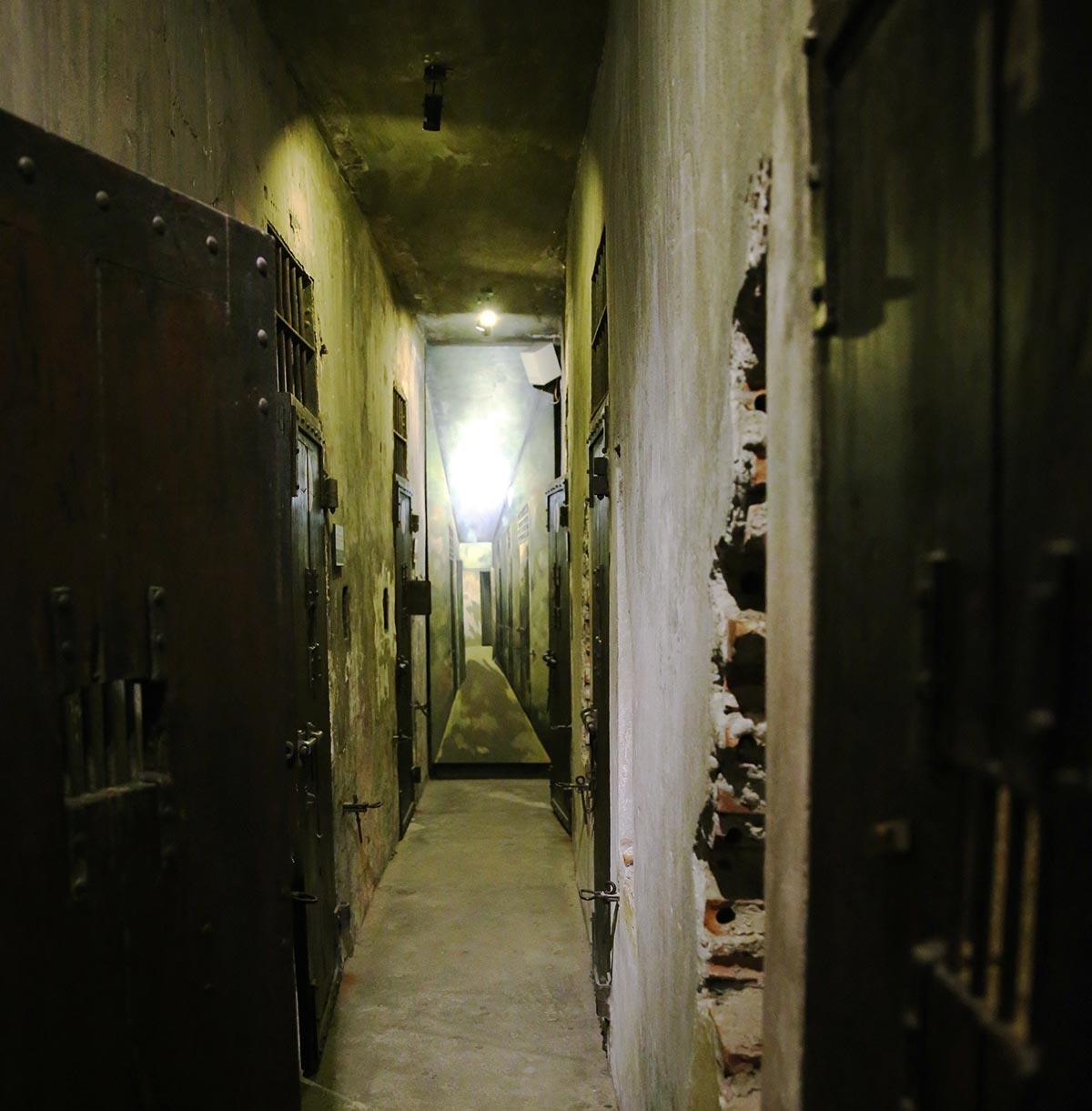 Hoa Lo has the feel of a place where humans —women and men, Vietnamese and American—have left scraps of their soul. You look up at the stone cells’ window slits and wonder what corners of the chambers the sun touches. The door slams shut behind you, like a fist clenching your sanity, and then you lean into those walls and contemplate cruelty.

One of the museum curators smiled in my direction and I ended up spilling my guts to the poor guy.

“It’s a strange thing, isn’t it?” I found myself whispering. I could not raise my voice in Hoa Lo. “The pairing of the stories of Vietnamese political prisoners with those of American POWs?”

The curator didn’t say it aloud, but something in his gaze asked, “Really? What’s so odd about that?”

Well, nothing, I guess. It’s just that honesty about war is such a rare thing by itself, you know? Never mind acknowledging the humanity of the “other.” This entire place runs counter to the self-centered logic of war, doesn’t it? I mean—Jesus—is that a logbook depicting all the American GIs who were held here? However imperfectly, your country has dealt with this war in a way that my country—despite the most elaborate film and literary establishment on the planet—has not.

Unfortunately, I am not quick witted enough to have said any of these things to the curator. But he smiled anyway—really smiled—and told me to enjoy my time in Hanoi. 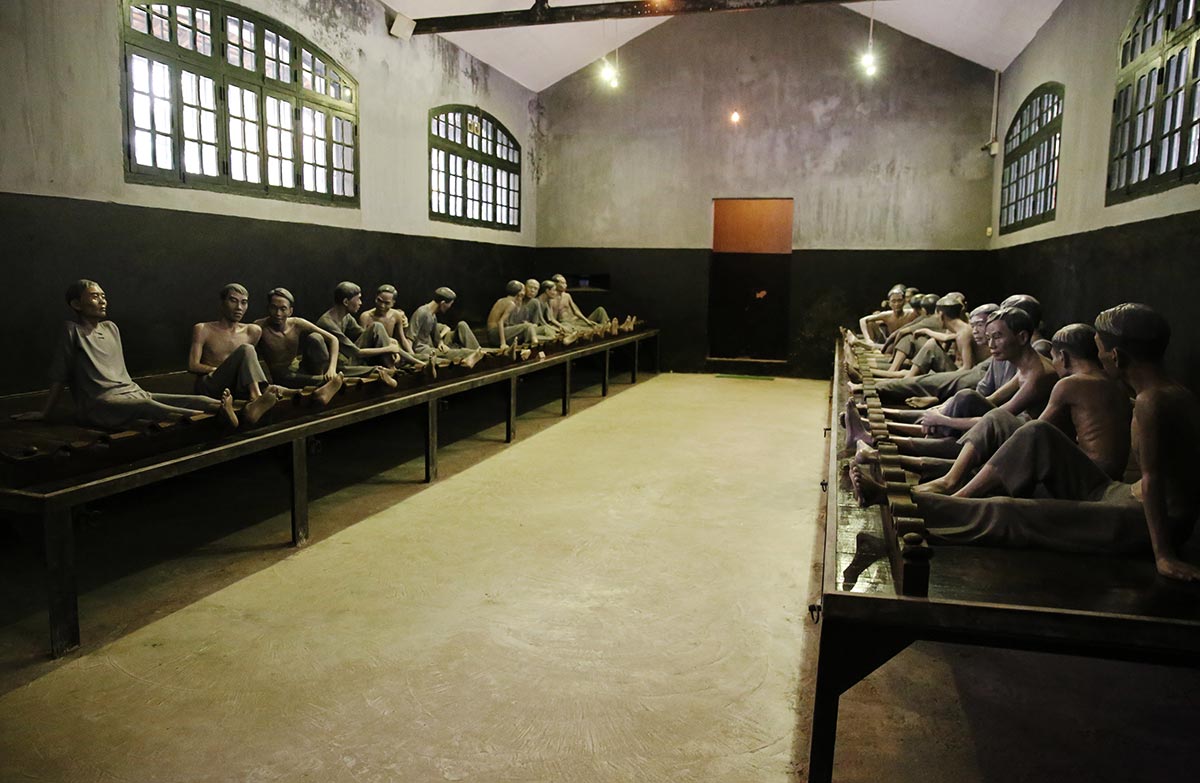 A main room of the Hoa Lo Prison.

That evening I called my dad from the hotel. I started telling him about Hanoi’s museums and then stopped. I tried explaining differently then stopped again. How do you explain recognition of others in our understanding of war? How to wrestle just memories out of fantasy? How to force recollection of things we’d rather forget?

During that conversation with my dad, I couldn’t get the words quite right. But I think he understood what I meant. And there was no mistaking the smile in his voice when he told me to enjoy my time in Vietnam. *

Dewaine’s writing has appeared in Drunken Boat, the World Policy Blog, the Afro Punk website, The Mantle, The Good Men Project, and Line of Advance Magazine. His wife, Iryna, is a non-profit professional who has worked for USAID, the United Nations and International NGOs on three continents. While in Ukraine she studied at the Kiev Photography School. You can find more of her work at her website, www.irynafarriaphotography.com, and follow her on Instagram: @irynafarria.

This Week in Travel News: A New Airline is Targeting #Millennials With #Hashtags and #Branding

4 Reasons Travel Agents Can Help You More Than You Realize