Here’s Part Two of Carla Bragagnini’s micro-destination recommendations, all gleaned from her own unique pre-pandemic travels, in hopes of getting you travel-inspired and in travel-planning mode, as reopening (yay!) gets underway.

Story and Photos (unless indicated) by Carla Bragagnini | June 2021

In case you missed Part 1 of the list—my first 5 selects—you can read it here. In this installment, you’ll find all sorts of trips for different travel types and budgets – from exploring a cat village across the pond, to a tropical bamboo road trip and a bubbled adventure closer to home.

We may all be a little travel rusty these days, but with things looking up, I hope you find inspiration in these destination suggestions,

A few years ago, I booked a last-minute flight within Europe to Montenegro, which cost about the price of a meal. I didn’t know much about the minuscule country, but after a manic taxi ride with ABBA on full blast and a windy bus ride through the country’s vineyards, I was sold. I found myself in a hostel in the coastal town of UNESCO-designated Kotor, a medieval old town, steeped with history and nature, and straddled between the mountains and the Adriatic Sea.

The town is characterized by orange-tiled homes, churches, towers, palaces, and zigzagging fortifications dating back to the Venetian and Austro-Hungarian periods. Hiking them is a worthwhile afternoon activity, especially during golden hour for views over the Bay of Kotor. 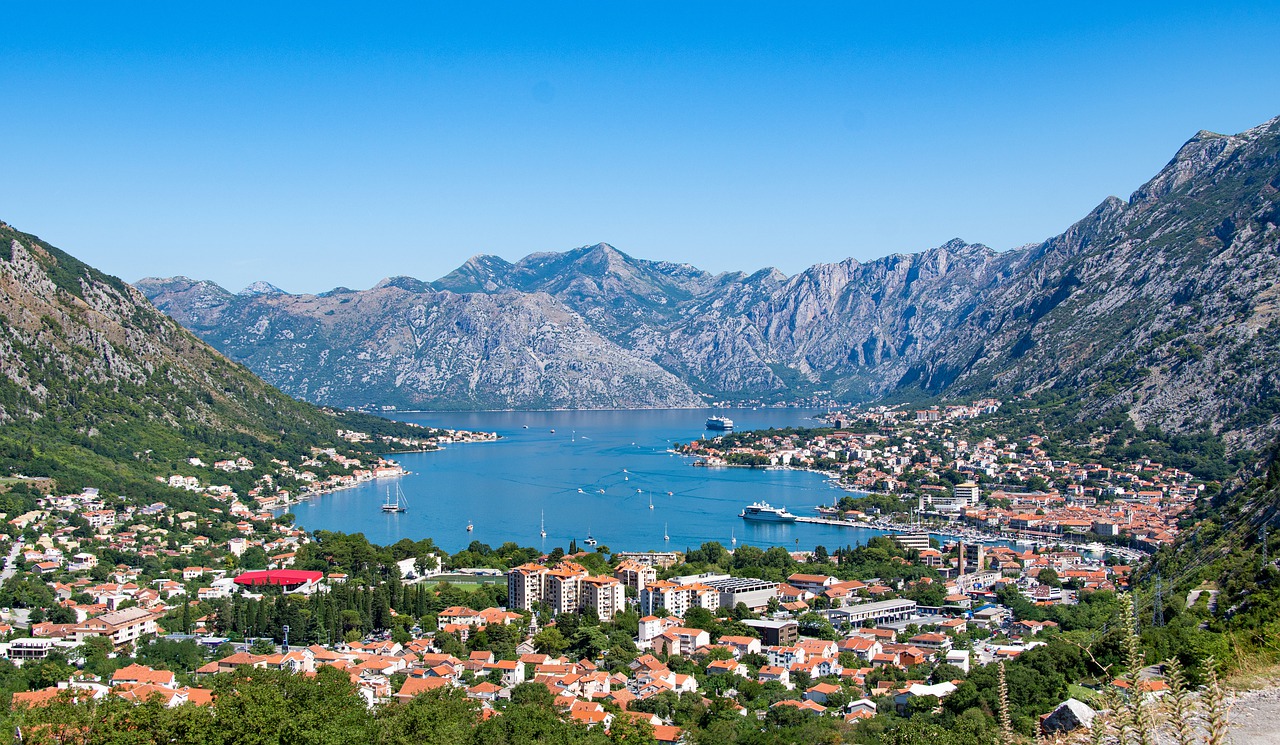 Kotor, in the Bay of Kotor, Montenegro. (pixelRaw-Pixabay) 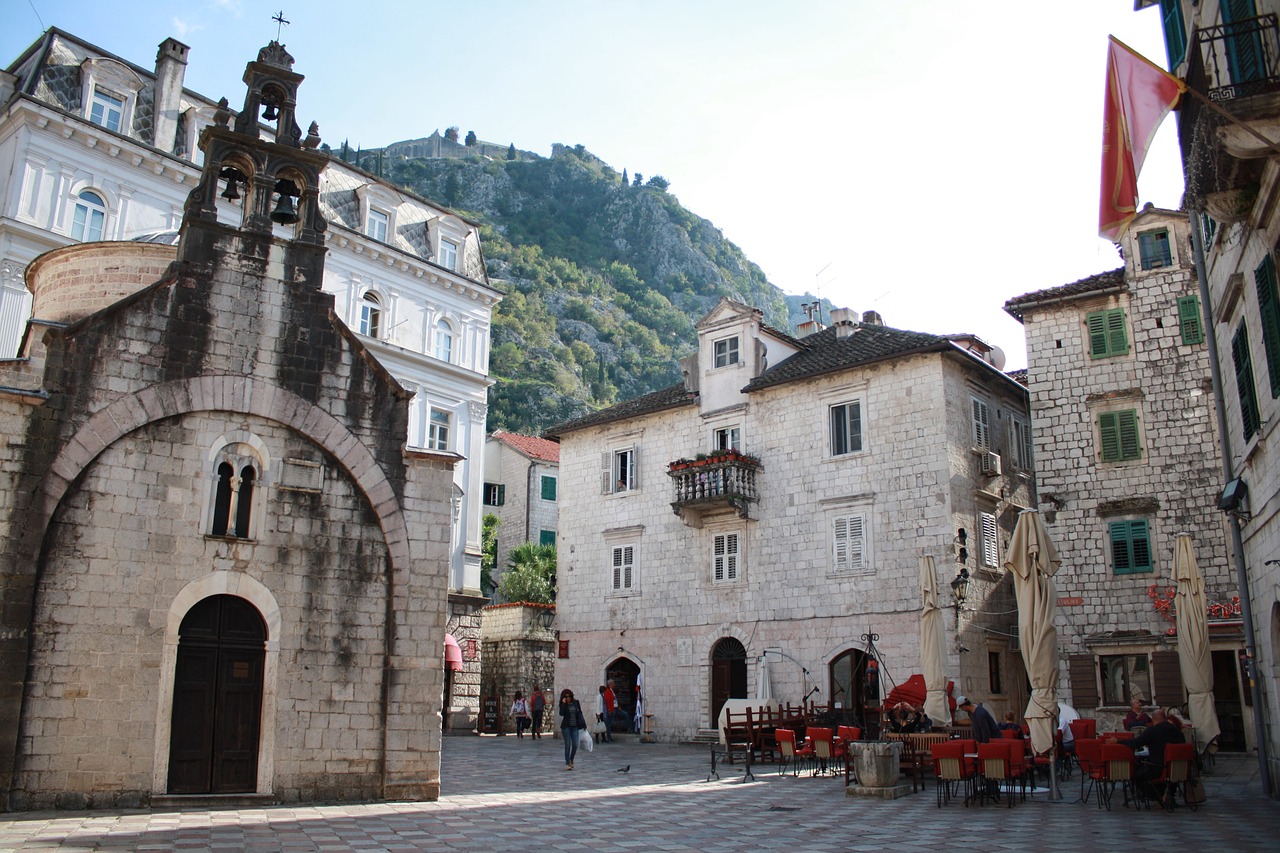 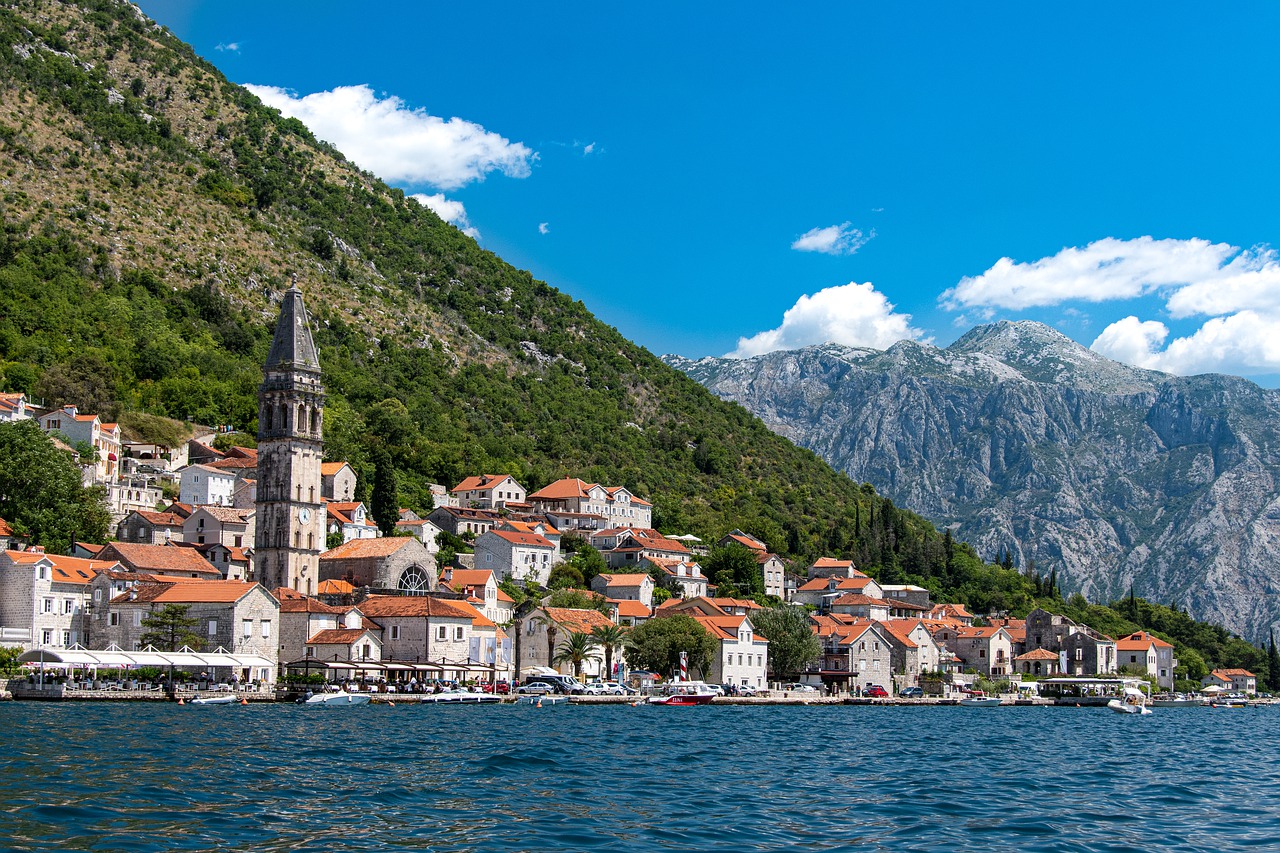 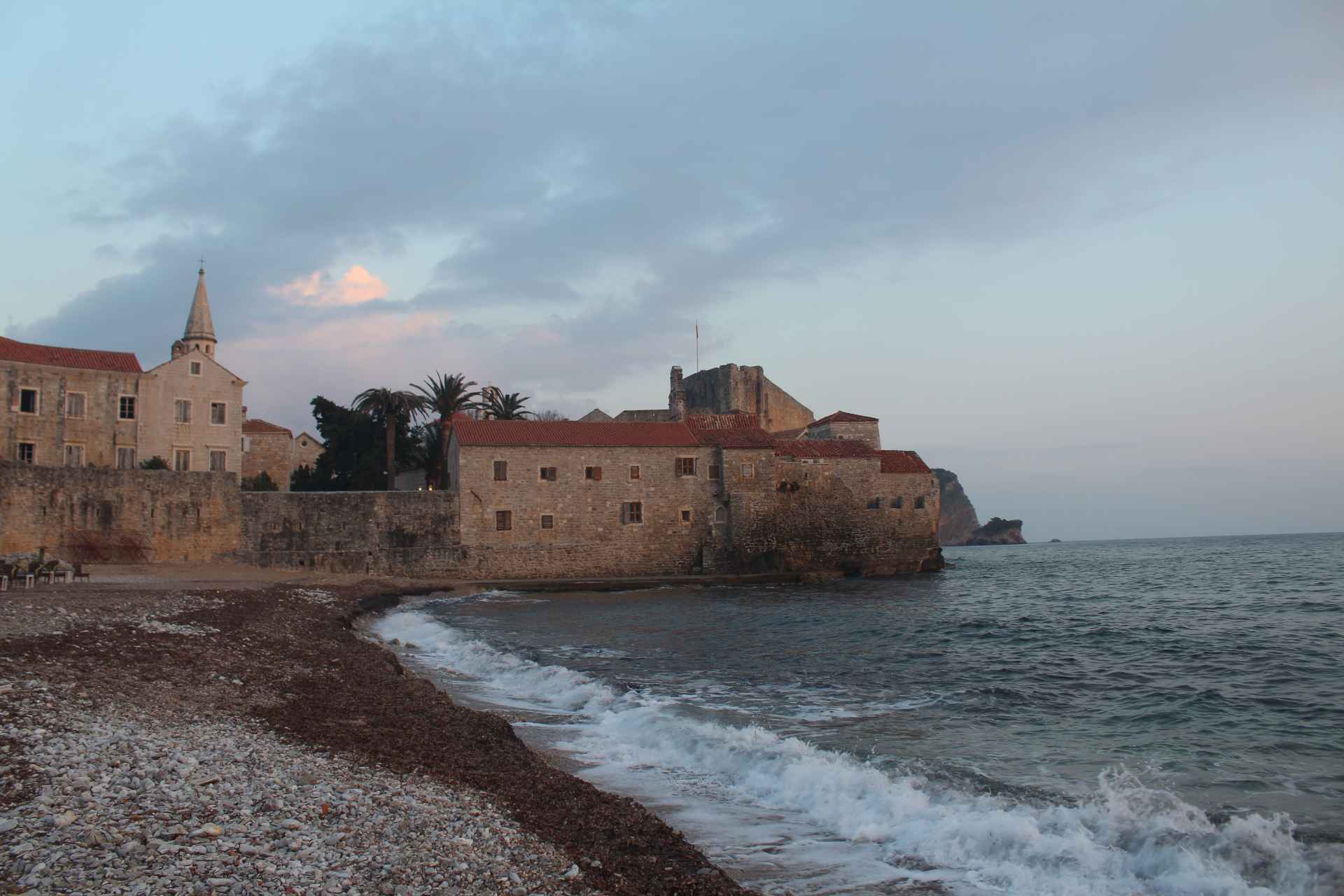 The ancient feel of Perast. 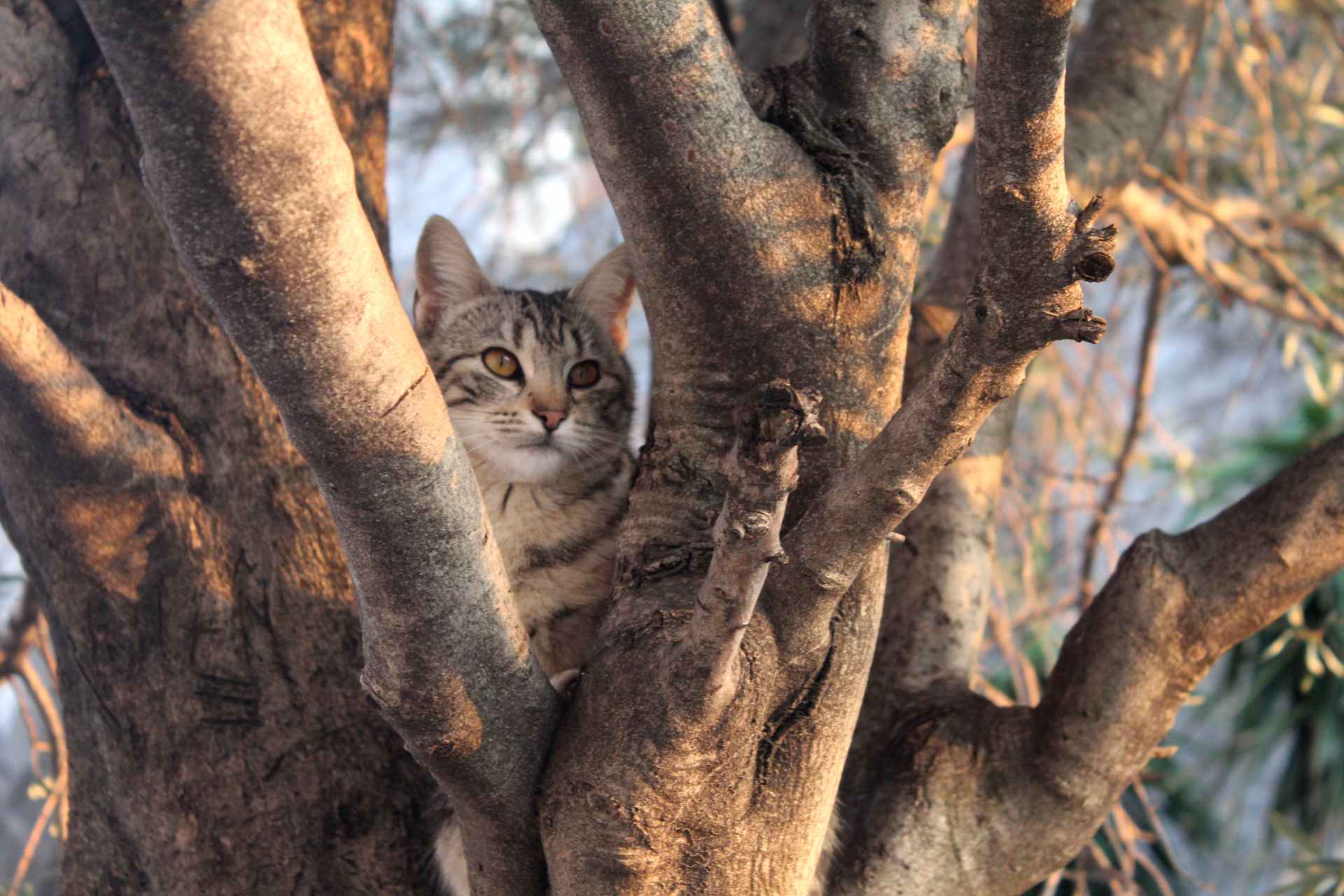 The infamous cats of Kotor!

As dusk settles, the town is filled with the sound of restaurant-goers and a choir of meows. It’s said that Slav sailors brought cats with them, which provided useful in ridding the town of unwanted pests. They have been revered ever since, which explains the well-fed strays and themed souvenir shops to match. That’s why besides the nautical museum, the town also has a cat museum.

After my kitty fix, I joined forces with other backpackers to travel the country in a rental car. We visited the quaint coastal town of Perast, just 10 kilometres northwest of Kotor, the monastery of Cetinje, and hiked in the Lovcen National Park. But there is so much more to see. Kotor is the perfect base for exploring the country and nearby Dubrovnik, Croatia. Montenegro may be mini, but it sure is mighty.

I was lucky enough to squeeze in a trip to Costa Rica just before the pandemic hit, but hopefully the country will open to tourism again soon, and welcome you warmly to the pura vida.

The country boasts biodiverse rainforests and plenty of wildlife-spotting opportunities in the mountains and on the coast. Costa Rica translates to “rich coast,” hosting hundreds of kilometres of world-class beaches, on both the Pacific and Caribbean, ideal for surfing, paddleboarding, kayaking and snorkelling.

One of my favourite places was La Fortuna, a small inland town at the foot of the Arenal Volcano and Lake Arenal, located about three hours northwest of San Jose. You’ll want to enjoy the local cuisine, including the gallo pinto traditional rice-and-bean breakfast to give you fuel for your adventurous days. 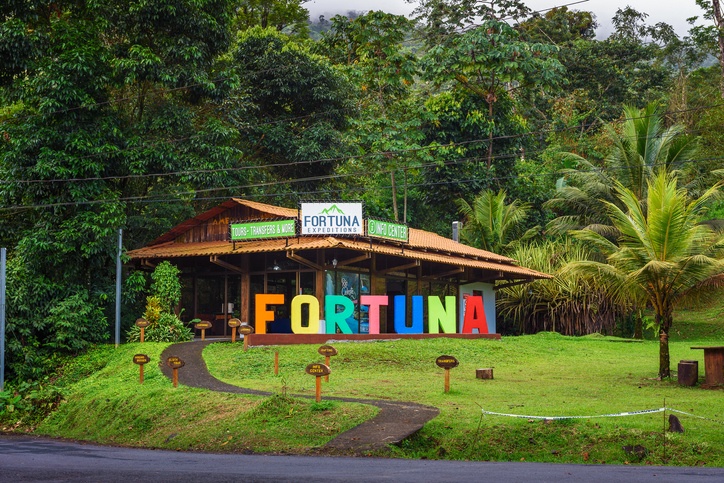 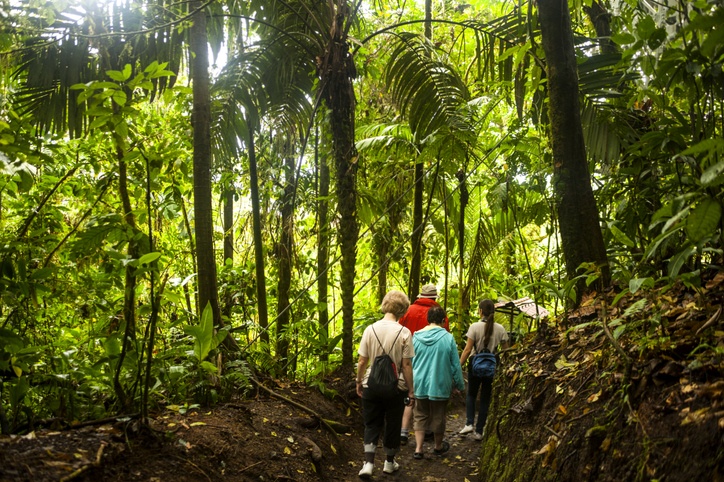 Trekking in the rainforests around Arenal Volcano. (sphraner-iStock) 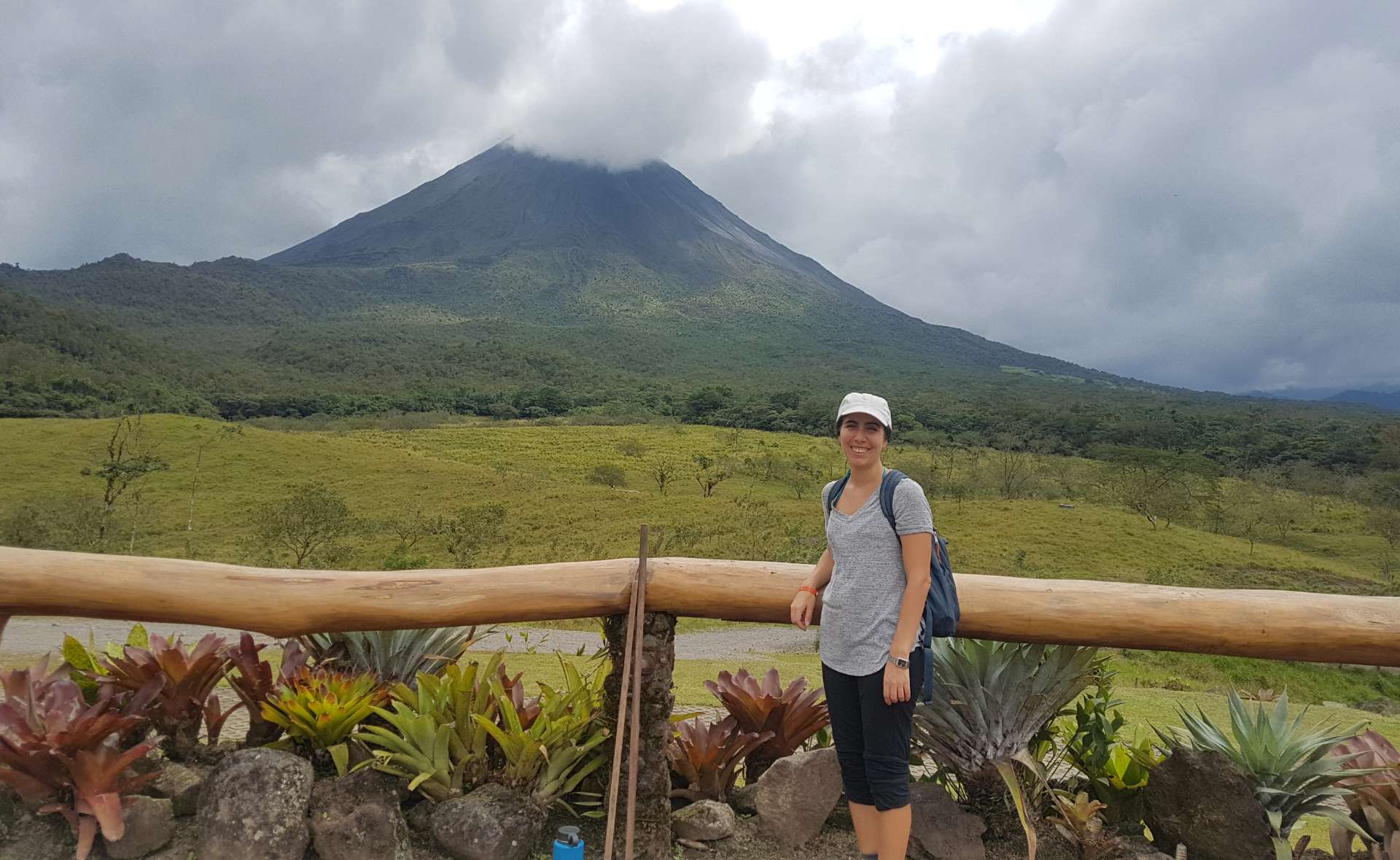 Carla, with Arenal Volcano behind her. 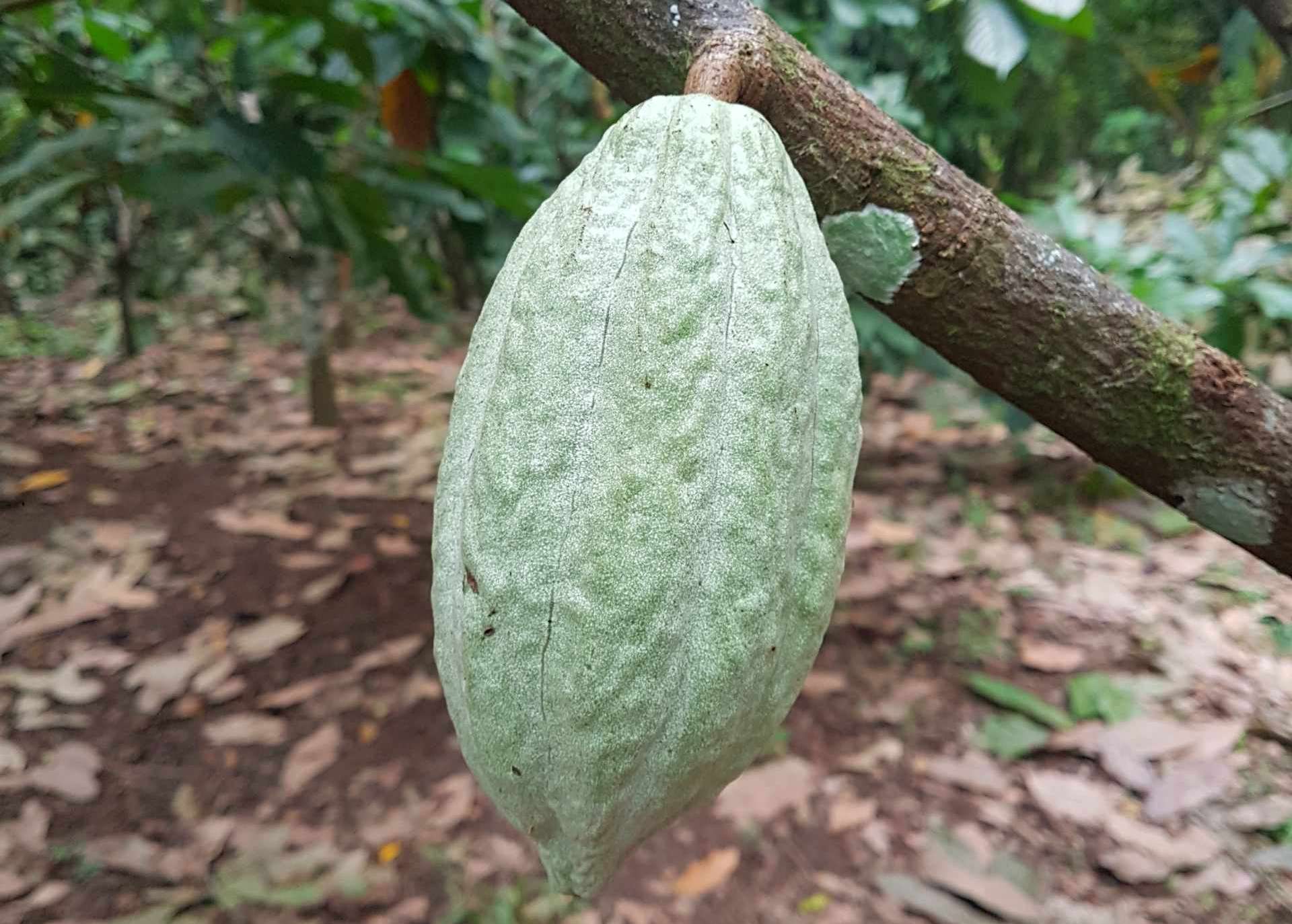 A cacao pod on its tree. Learning to make chocolate in Costa Rica was a highlight.

La Fortuna is a thrillseeker’s paradise – ziplining, caving, canyoning, whitewater rafting, 4WD and so much more. Though funnily, some of my highlights were more low key – bathing in the local hot springs, attending a chocolate making workshop, and taking a serene yoga class beneath the looming volcano.

If you are feeling slothy, you can hike to La Fortuna Waterfalls and spend a lazy day picnicking and swimming. Even though it is one of the most active volcanoes in Central America, the Arenal Volcano is also taking it easy – it’s currently in its resting phase. You can hike through Arenal 1968, a park made up of hardened lava from an eruption in 1968. Be on the lookout for toucans, anteaters, coatis, sloths and monkeys stopping by to say hola!

Recognized as the fourth-largest city in Europe, the former imperial capital of St. Petersburg is a picturesque city known as the “Cultural Capital of Russia,” thanks to its plethora of galleries, theatres, monuments and cultural institutions.

Visiting the State Hermitage Museum is a must, as it holds one of the largest collections of art in the world (more than three million pieces), housed in a series of palaces along the embankments of the Neva River. It’s said that to view its entire collection would take years – needless to say, the one day I spent there was nowhere near enough.

Speaking of art, some of the city’s most impressive works are found underground. St. Petersburg’s metro stations are among the most beautifully decorated in the world, with marble interiors, grand columns, decorative lamps, and carved reliefs. Additionally, it is one of the deepest subway systems – to me, the escalators seemed never-ending! 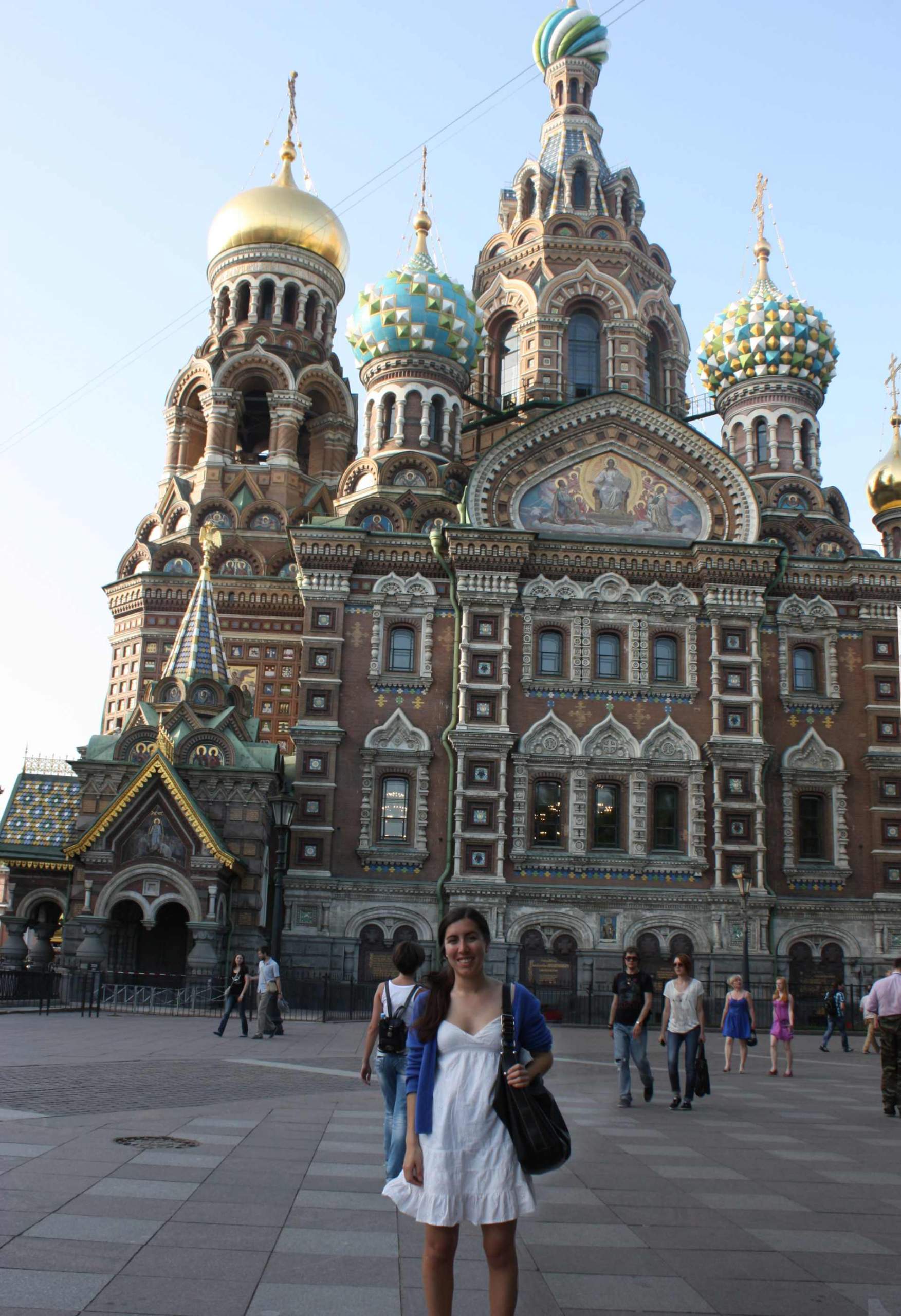 Carla in front of the Church of the Savior on Spilled Blood, St. Petersburg. 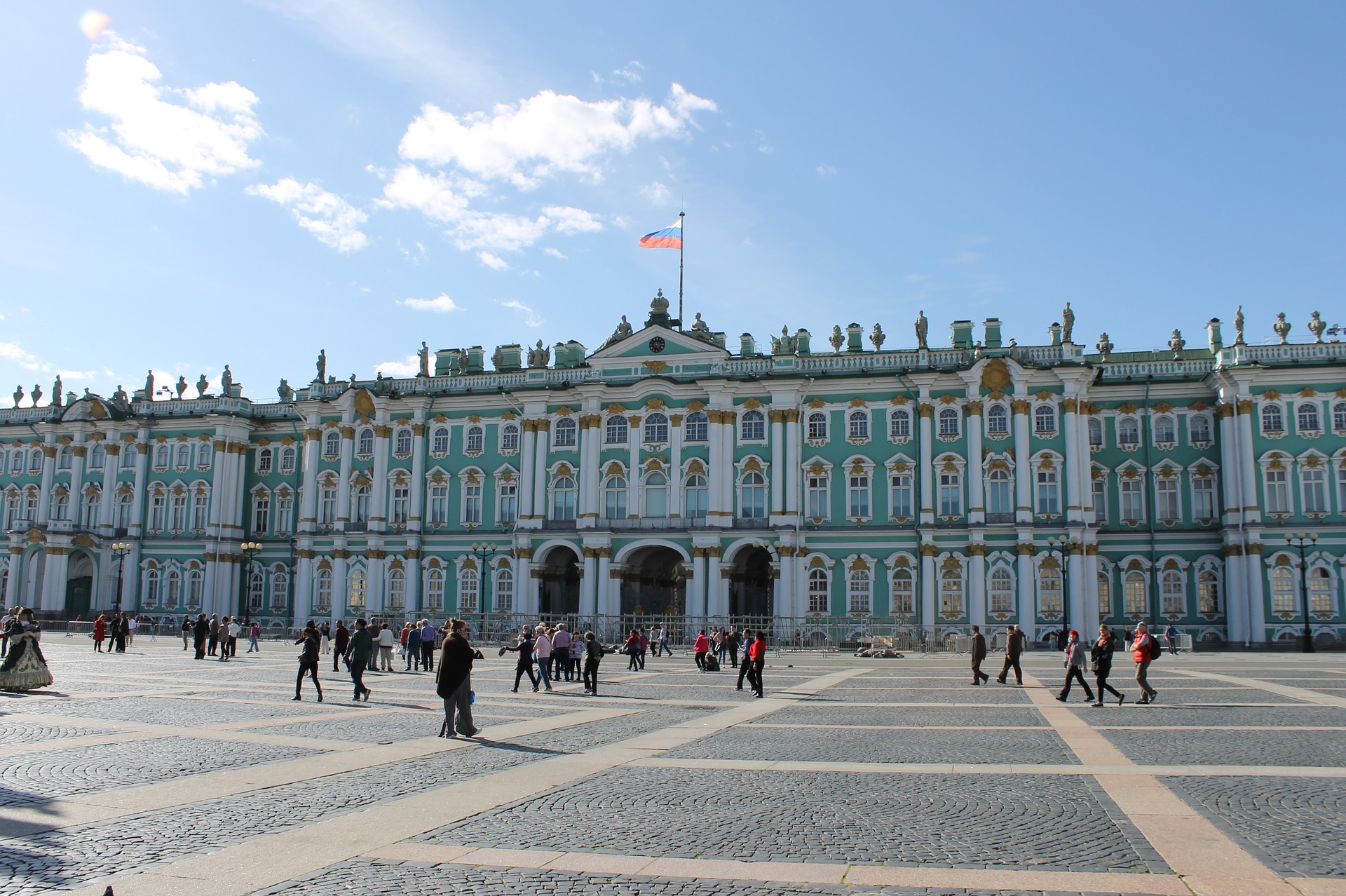 The Hermitage in St. Petersburg is the second-biggest art museum in the world. (A. Grishin/Pixabay) 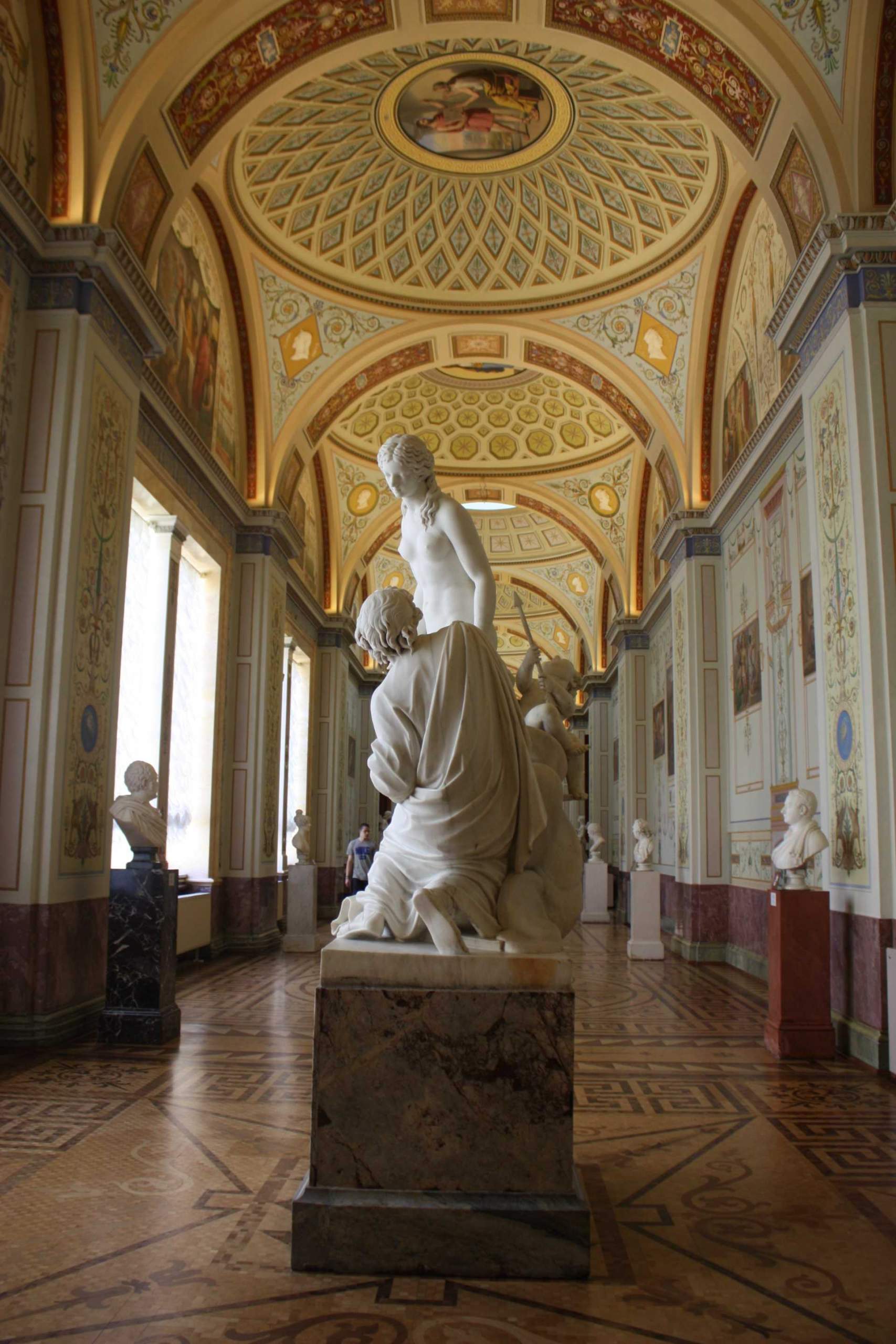 Inside the magnificent Hermitage. 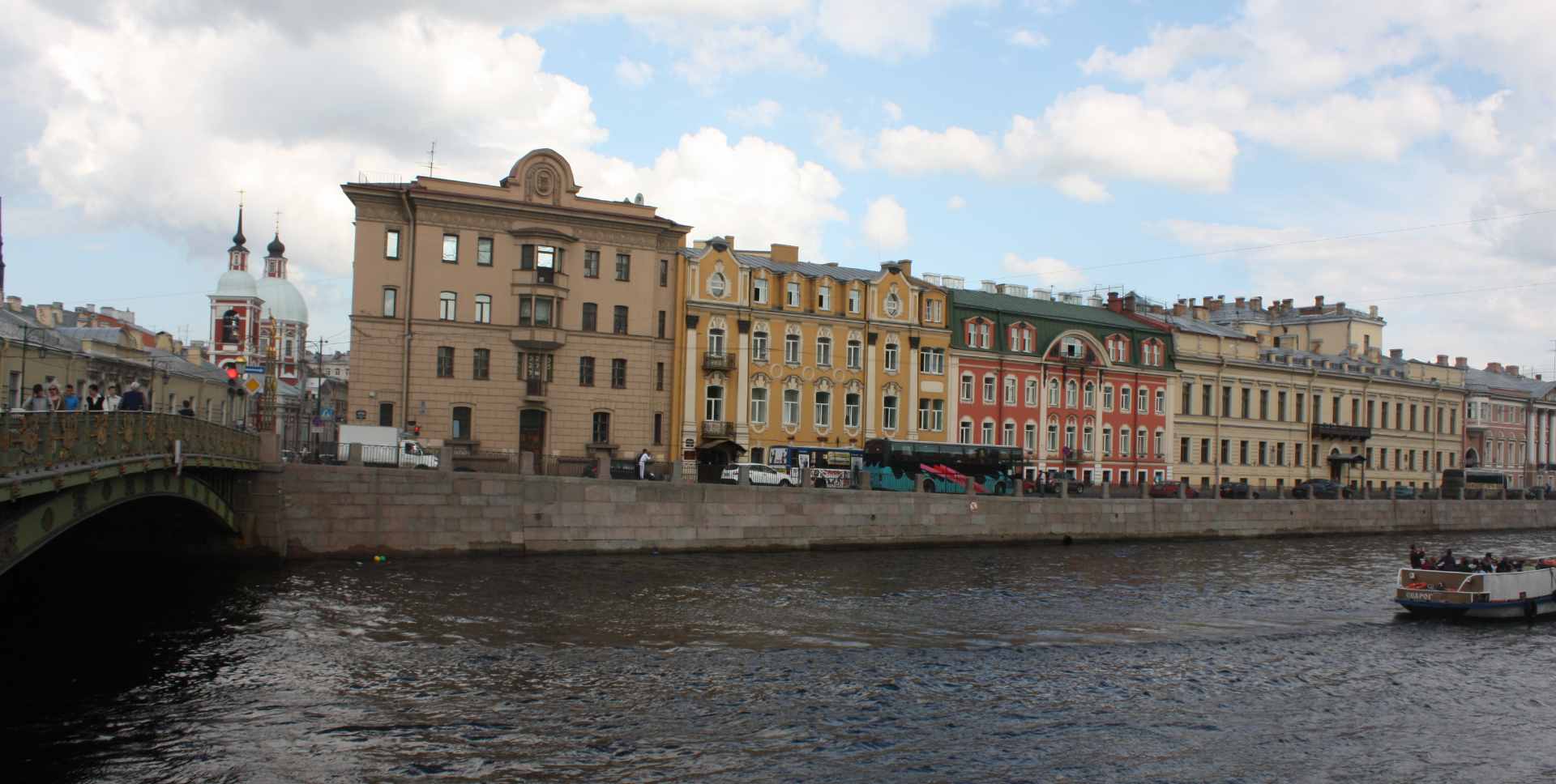 The rivers and canals of St. Petersburg, a city built on the marshlands of a river delta system.

The Church of the Savior on Spilled Blood may have an intensive name, but the upbeat architecture is anything but – this incredibly elaborate and colourful church needs absolutely no filter. And if you’re into photography, look no further than the city’s canals, which have earned it the shared nickname of “Venice of the North.”

The city was built on islands and is connected by more than 300 bridges. Take a cruise to witness its picture-perfect canal-lined palaces, bridges, and gondolas. Don’t be surprised if you’re tempted to bring a sketchbook along – this is the kind of city that has that effect on people.

[Editor’s note 2022: Travelling to Russia at this time (2022) is no longer recommended . In February 2022, Russia illegally invaded its democratic neighbour Ukraine, and started an unprovoked war that has targeted civilians and killed thousands of people. Russia is an autocracy, not a democracy, and its political elites (who represent the government) are arresting, jailing and even killing Russian citizens who speak out against this. The Russian government is using travellers/foreigners/expats who are in Russia as international weapons, arresting, detaining and jailing them in what many call “hostage diplomacy,” and has been doing so for years (meaning as a baseline, travellers are not safe). There are international sanctions in place, and even laws in Russia that make being there unsafe for foreigners. These realities make Russia off-limits as a travel destination at this time (we are hoping this will change, perhaps with new leadership and a new generation?!), and we should emphasize that these realities rest with government operatives, and the political and power elites of Russia — and not the Russian people, and everyday citizens, who like us, are likely just living their lives.]

I travelled to Hawaii one year to escape a Canadian winter, and Maui provided the perfect refuge. I rented a van with a friend when our plan to travel by bus fell through (Maui public transpiration doesn’t allow large backpacks!).

Our plan B was a huge blessing, as a van gave us unlimited freedom to explore the island. One of Maui’s many treasures is the Road to Hana, a scenic coastal drive to – you guessed it – the town of Hana. An audio guide pointed out all the highlights for us – white, black, and red sand beaches, waterfalls, and even a perfectly-placed coconut ice-cream stand.

Every twist and turn along the road is stunning. The Bamboo Forest hike goes through waterfalls beyond waterfalls, beyond waterfalls. And just when you think there couldn’t possibly be another, there’s one more. I’ve never seen anything like it. 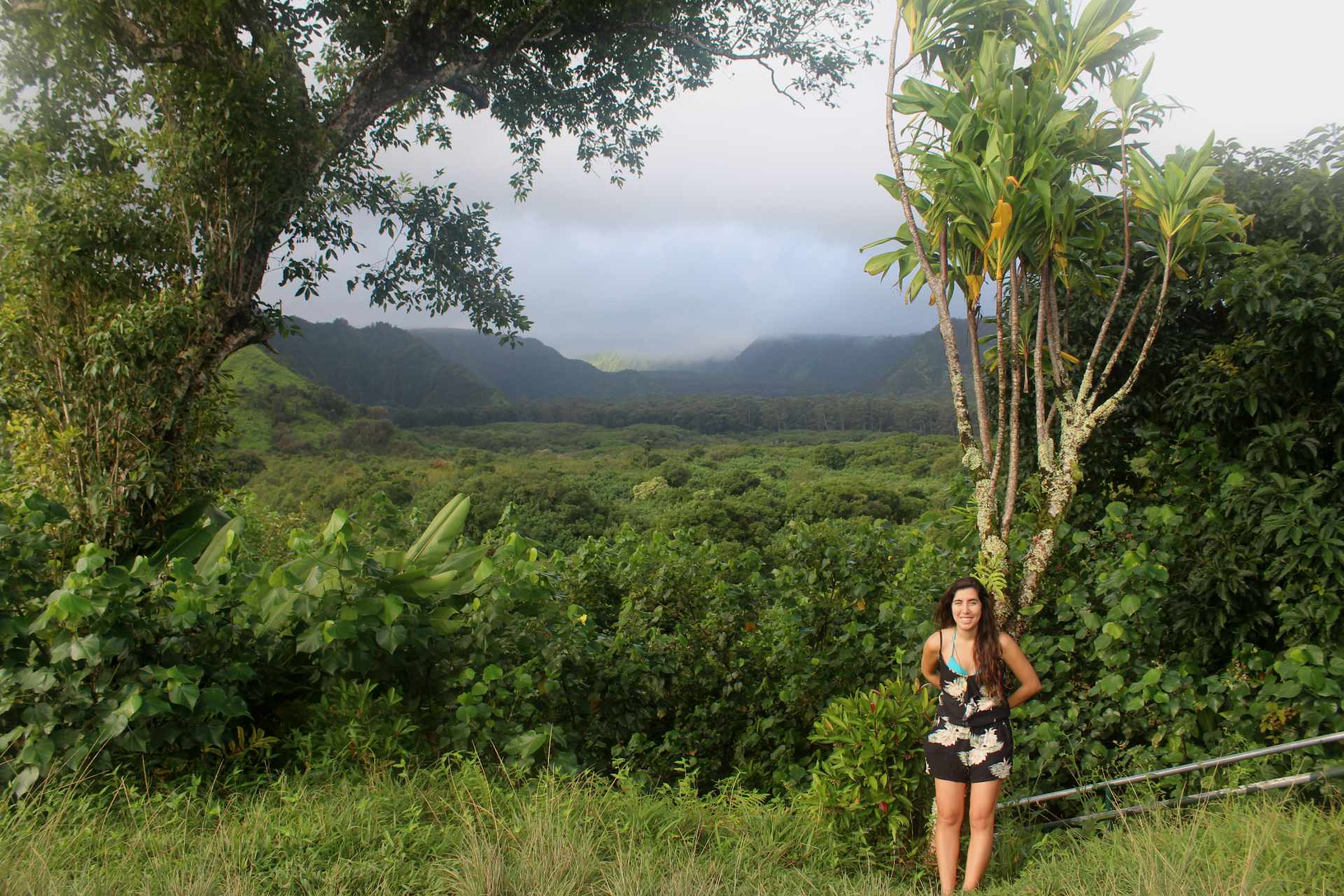 Carla hiking the Road to Hana in Maui. 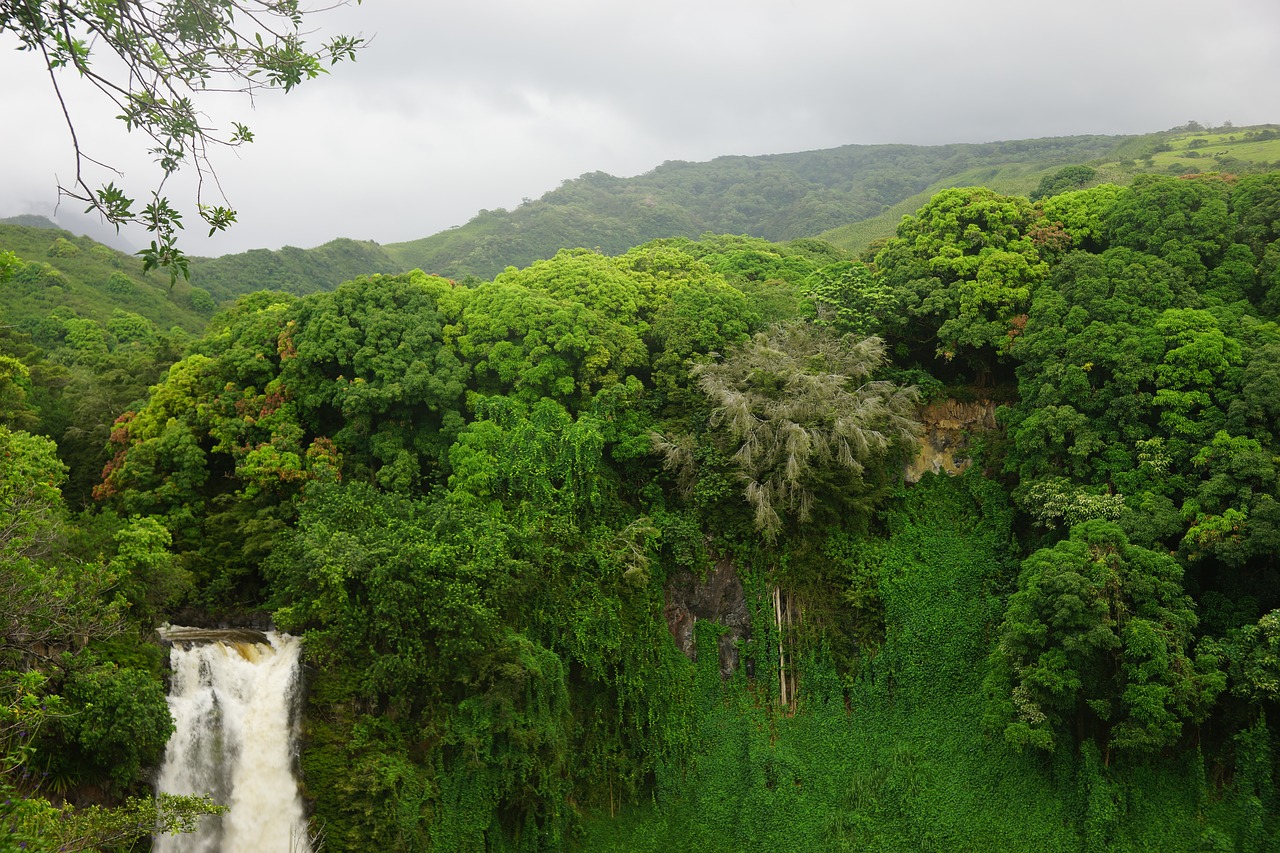 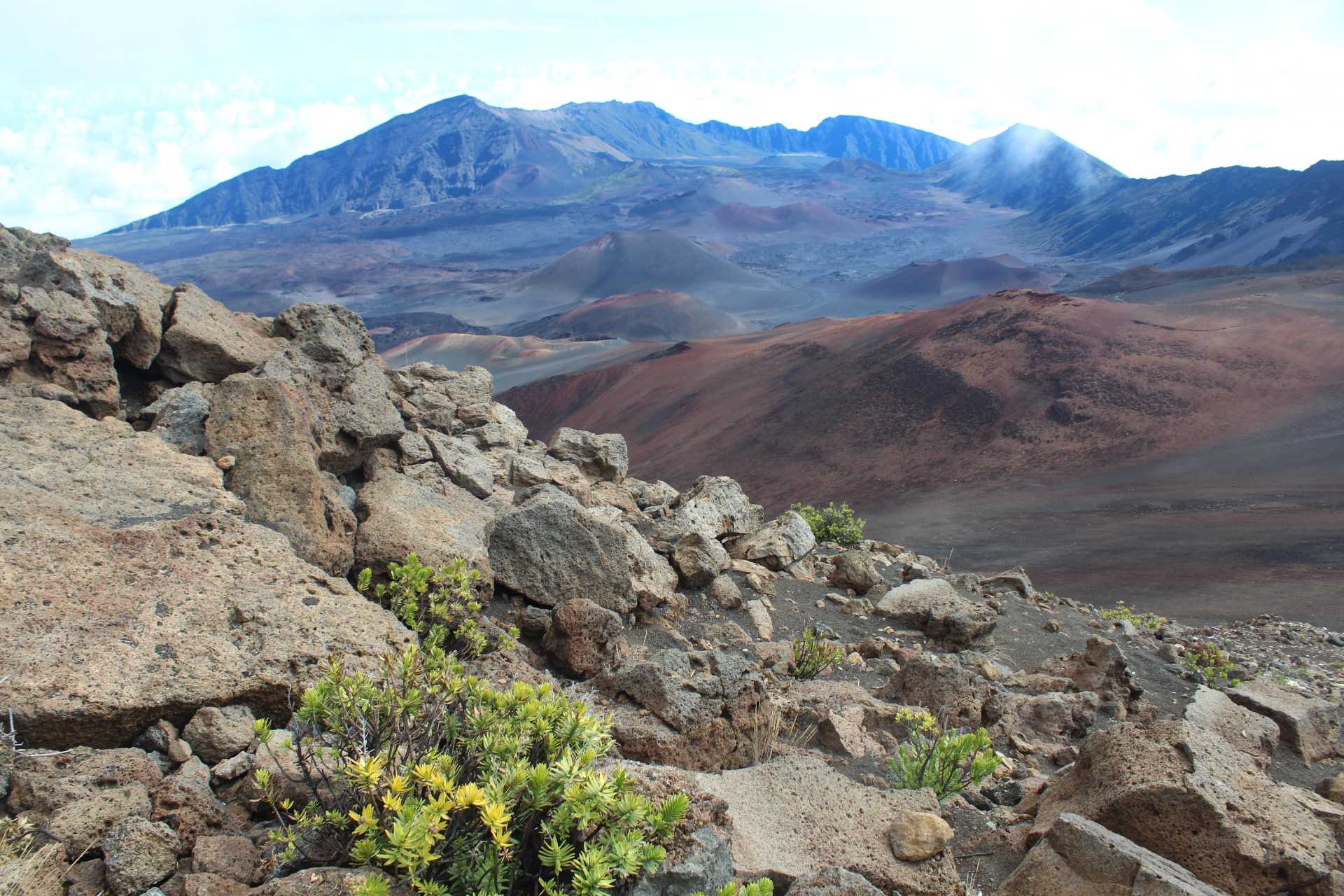 Hiking around the Haleakala Crater. 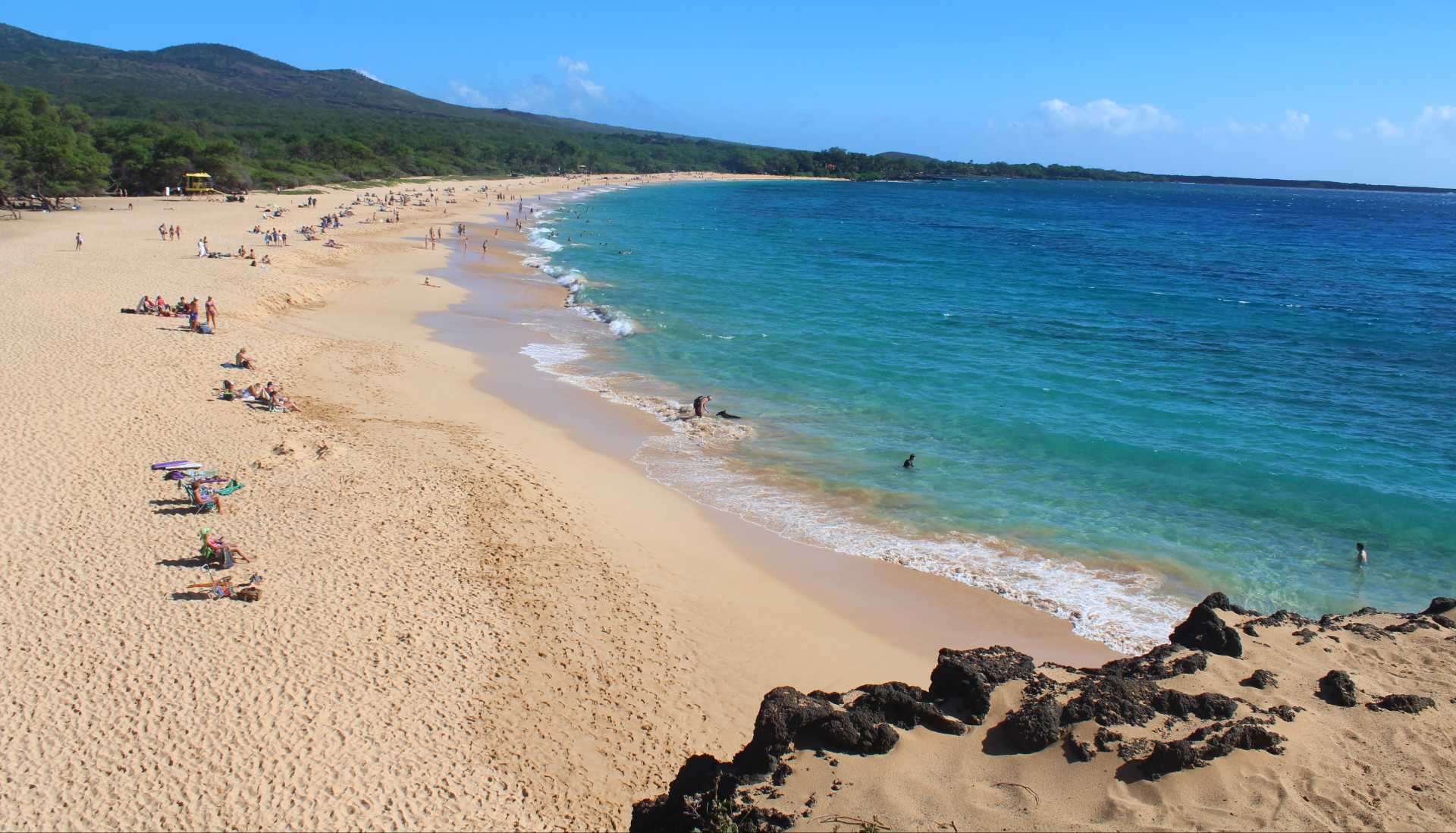 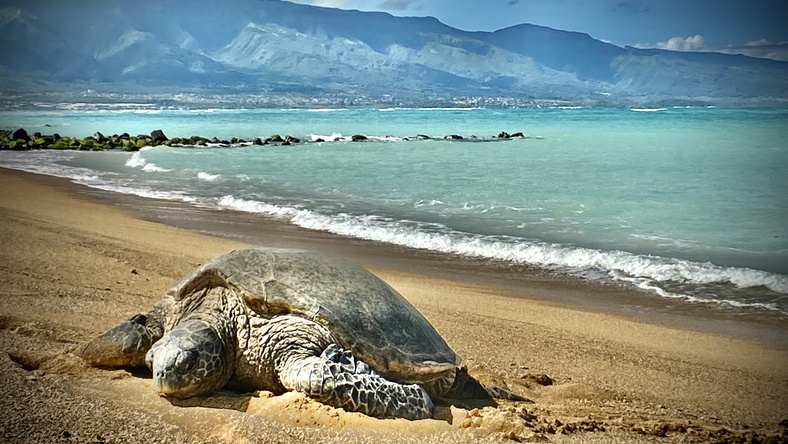 A not-so-uncommon site: a green turtle rests on a Maui beach. (Samuel Howell-iStock)

Though it is near Haleakala National Park, the summit side of the park has a separate entry point. That side is vastly different, characterized by a volcano and its red crater, resembling an other-worldly landscape. It is so space-like that it’s said astronauts trained for moon landings here. In Hawaiian, “Haleakala” means the “house of the sun,” so start your day’s hike by watching the breathtaking sunrise on the volcano summit and seeing the scenery below catch fire.

We ended the trip by snorkelling among turtles near Makena Beach, returning one very sandy and adventure-marked vehicle back to the rental company.

Let’s end this list with a place a little closer to home. If all else fails and international travel is not yet in the cards for you this summer, you can’t go wrong seeing more of Canada!

Renting an RV is a great way to travel during the pandemic; it provides a safe bubble, and the wilderness of the Rockies is the ideal place to social distance. The lesser-known Canmore, Alberta, with its proximity to Banff, is a strategic place to base yourself as it’s more budget-friendly and laidback than its famous counterpart.

When I visited one year in August, I missed a Northern Lights show by just a day, so keep your eyes to the skies. Besides Aurora chasing, the nature opportunities in the Rockies are endless. Undertake the bucket-list-worthy Icefields Parkway road trip (from Banff to Jasper), while stopping at the touristic sites of Lake Louise, Moraine Lake, Athabasca Glacier and the Miette Hot Springs, and being on the lookout for wildlife like bears, caribou and big-horned sheep. 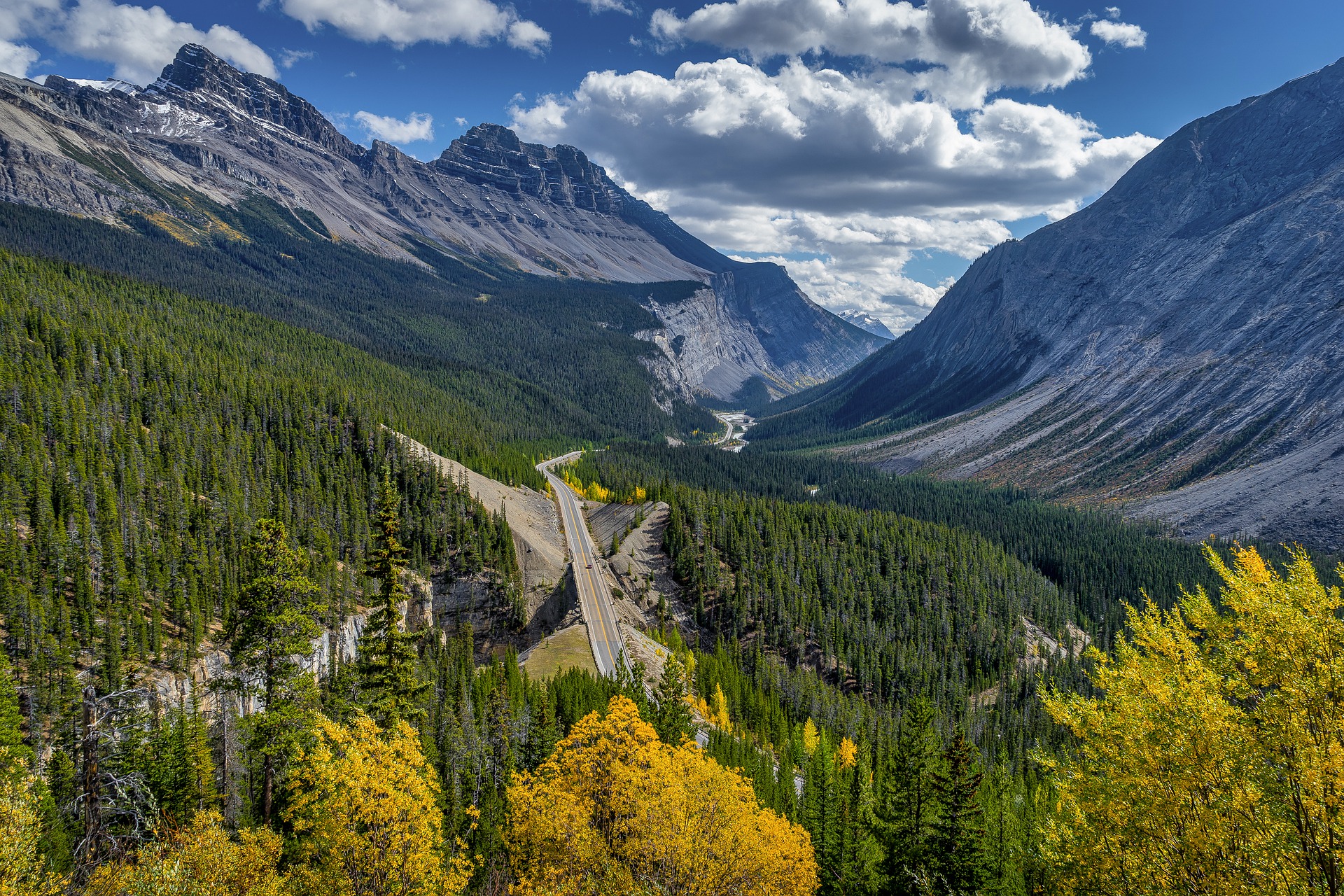 Road tripping down the spectacular Icefields Parkway, that inks Banff and Jasper in Alberta. (Jorg Vieli-Pixabay) 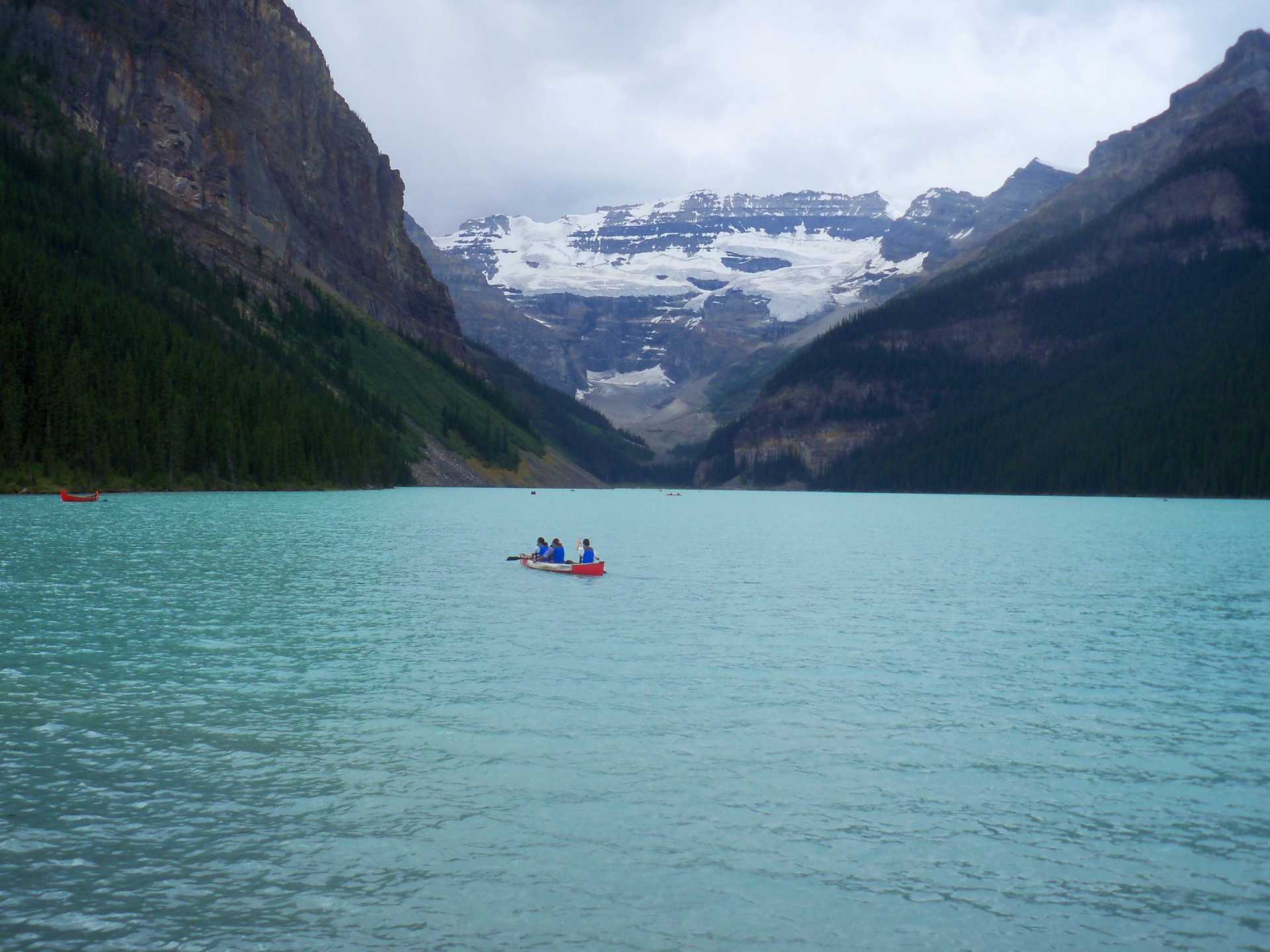 Kayaking and canoeing on Lake Moraine is a bucket-list for many paddlers. 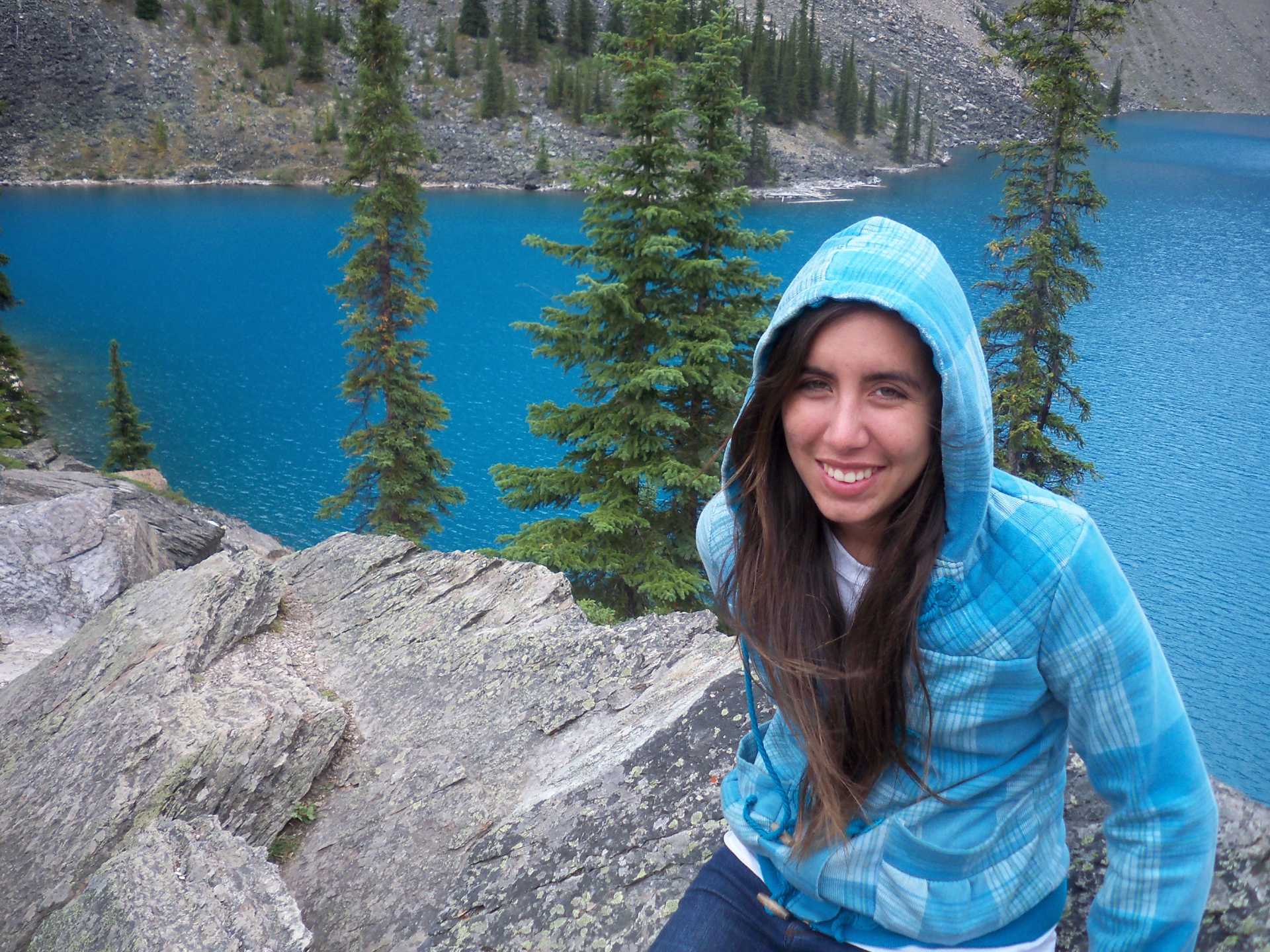 Carla, with stunning Lake Moraine behind her. 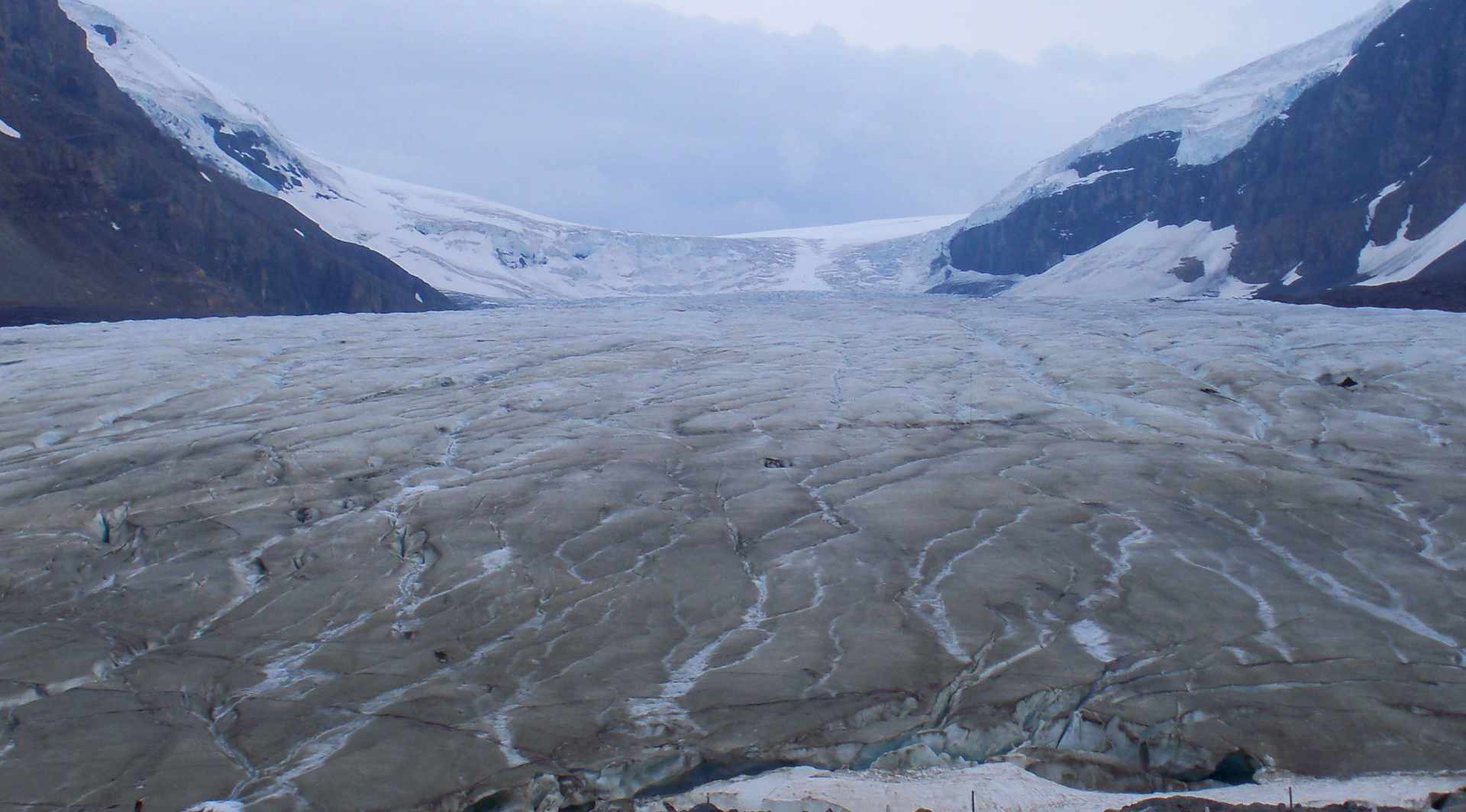 Hiking the Athabasca Glacier near Canmore is an awesome adventure. 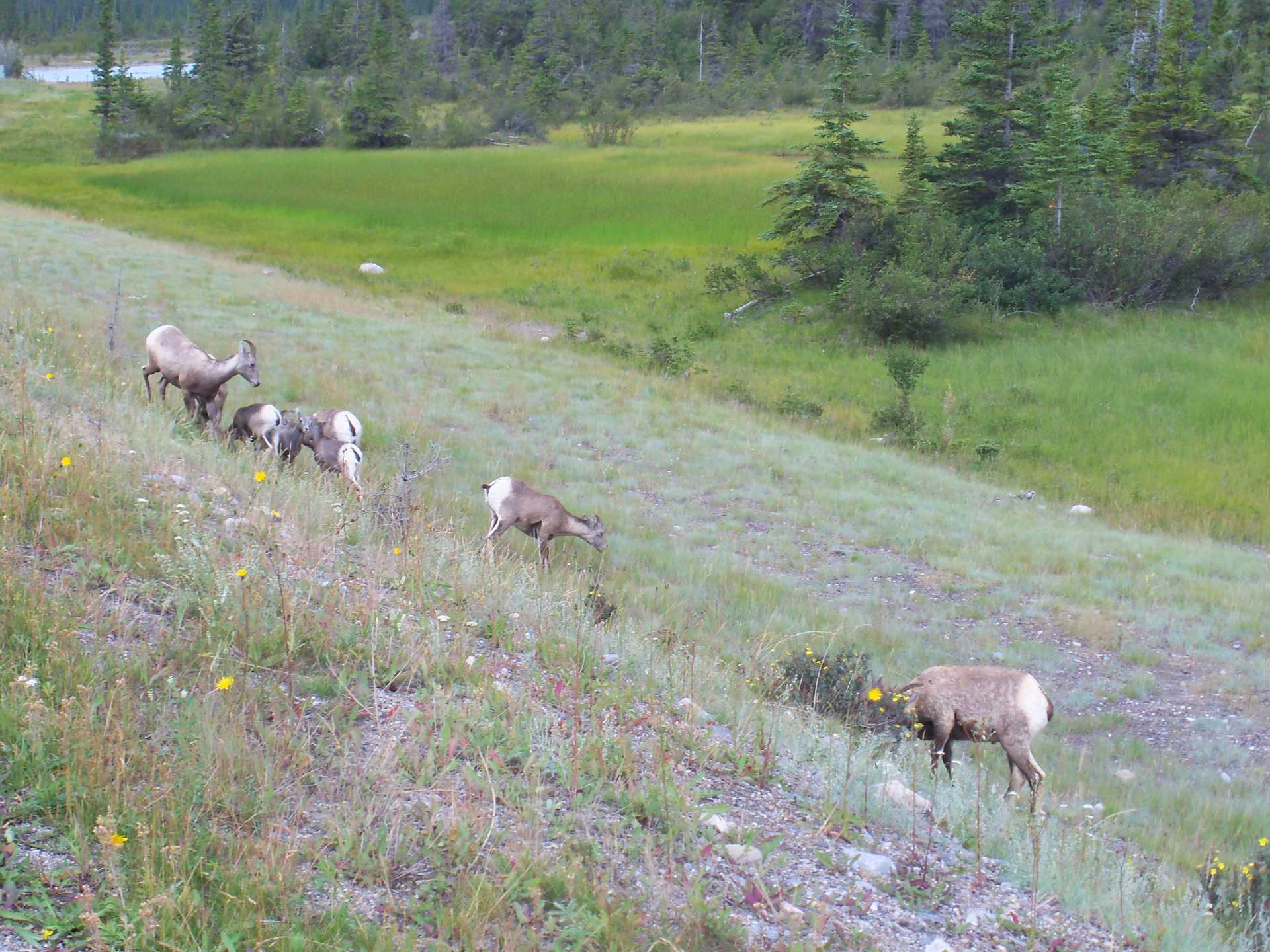 Canada’s legendary wildlife is on display everywhere in the Rockies.

The hiking in Banff National Park and Jasper National Park is unparalleled, with countless options, including the iconic Skyline Trail. But there are several less-trafficked hikes for all experience levels within the Canmore region and Kananaskis Country (a conglomeration of 10 parks), offering jaw-dropping views, including Mount Yamnuska, Grassi Lakes, Rawson Lake and Sarrail Ridge. The views will have you clicking your heels, because as much as we love to travel abroad, there’s simply no place like home. ♦

The Dreaded Portage! | A Beginner’s Guide to Solo Canoeing (Part 3)

The Tea Sessions with Jeff Fuchs | Kirti, Karma, and The Chai