That Time We Missed the Boat in Athens

After three sweltering days in Athens, my friend Laura and I rose early and made our way to nearby Piraeus, ready to board our 8:00 a.m. ferry to Santorini. It had been a whirlwind visit, climbing to the Acropolis for history and a hell of a view, confronting local politics by stumbling into unavoidable public demonstrations, and racing our way through as many museums and monuments as possible. 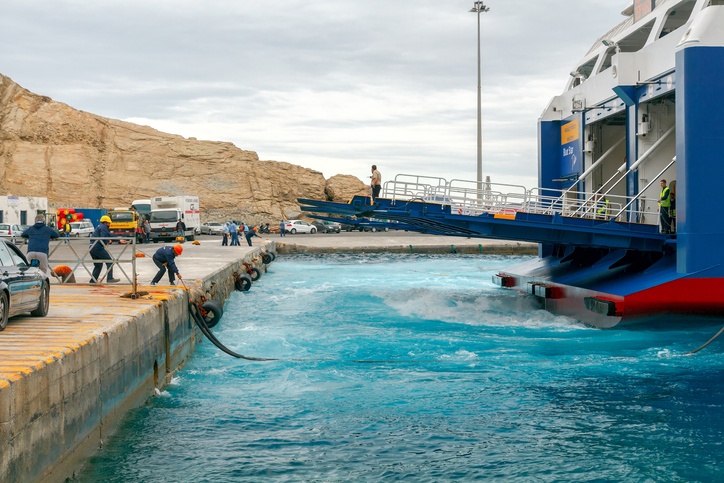 A great way to see the Greek Isles. Here, the sea ferry mooring off in the port of Athinios in Santorini. (Pel_1971/iStock)

We’d stayed on schedule from start to finish, despite the steady stream of Athenians who never seemed overly determined to get anywhere but were always on the move—pinballs whizzing about unpredictably, momentarily disrupting and distracting us. It was time to escape the commotion of the city and trade it for some island sun.

Two college juniors on spring break, we were impressed with the success of our Athenian adventure, congratulating ourselves for our logistical achievements and for arriving 30 minutes early for our ferry reservation to paradise. We were a little surprised to find ourselves the first passengers to arrive, but, then again, we were really on our game that week and probably just that much more prepared than everyone else.

Ten minutes after wheeling our luggage to the dock’s edge, it occurred to us that there should surely be at least one other passenger there by 7:40. But there wasn’t.

I headed to the ticket kiosk to make sure we were in the right spot while Laura stood guard with our bags. The ticket agent took one look at my carefully printed reservation, confirmed that we were in the right place and enthusiastically noted that my scheduled departure time was 8:00 AM. I was glad he recognized my punctuality, and I asked whether the boat might be arriving soon.

Daylight saving time had begun overnight in Greece, and Laura and I missed the boat—figuratively and literally. While most of Europe had “sprung forward” a week earlier, Greece, with its famously flexible attitude toward time, evidently waited a bit.

The next ferry wasn’t leaving until 8:00 p.m. Twelve. Hours. Later.

An extra day in a new city can be an awesome gift, but we’d already checked out of our hotel and abandoned downtown Athens, laden with an impressive stack of luggage. We hadn’t yet learned the lesson of moderation, and found ourselves exporting more suitcases from Athens than we’d imported; we certainly wouldn’t be climbing any mountains with our excess baggage in tow.

At this early hour, there were plenty of open tables at the harbour’s waterside café, so we planted ourselves at a corner table, casually stashing suitcases by our feet and on spare chairs. Then we began to order, strategically dragging out the meal for as long as possible: some famed Athenian frappes to start… a pair of Greek salads an hour later… a round of pastries some time after… a lamb gyro to follow. One last indulgence in each of the city’s specialties.

Until we were abruptly evicted. We begged to extend our meal, but four hours of painfully paced ordering had finally worn out our welcome, and we couldn’t seem to pay our way into any more minutes at the table. It was time to haul our bags elsewhere.

The train station was the only other nearby venue, and it was both public and free, so we set up shop on a long bench by the tracks and pondered our next move. But as an actual move wasn’t an appealing option, we adopted the time-honoured tradition of people-watching.

While chaotic commuters raced to and from countless trains around us, our day passed by just as quickly, though we hadn’t broken a sweat for the first time since we’d arrived in Greece. Somewhere between games of “Which Passengers are Secret Agents?” and “The Next One Off the Train is Your Future Spouse,” we came to understand Athens better than when we were plowing through it.

Frenetic energy surrounded us, but we sat quiet and observant amid the madness.  Our lack of urgency in that space certainly confused many harried tourists, and we surely inconvenienced a few with our bulky presence, but it dawned on us that no Greek commuters seemed concerned by our unconventional behaviour. It wasn’t so unconventional to them. For days, we were baffled by their seemingly lackadaisical attitude amid the clamour of the city, challenged in our speedy endeavors by their incessant aimlessness.

But on that day, we realized their attitude wasn’t an irritating by-product of carelessness—it was the carefully crafted art of preservation. In the historical context of a people who had survived all manner of change for millennia, amid crumbling ruins constantly reminding them of cultural and physical impermanence, surely the Athenians long understood our newfound world in which even time could change without warning.

When we finally boarded our ferry that night, we knew we still had an eight-hour sea journey ahead. But it didn’t seem so onerous anymore. That day, we’d learned how to observe, how to experience a place and its people not by trampling through it, consuming much and consuming fast, but by being still and letting a culture consume us.

Some hours into our ferry ride, seated at a round table with a few Greek twenty-somethings, I made my way through a deck of cards, one at a time, goading Laura to blindly guess which exact card was at the top of the deck.  Each time she guessed incorrectly, I moved it to the back of the pack and asked her to guess the next one. Eventually, one of our tablemates finally cracked and asked, “How long are you going to let her keep guessing?”

I answered, simply and honestly, “As long it takes.”