One man’s quest to not embarrass himself while braving the world’s longest horse race with his fiancée.

A whole range of emotions flowed through me as I waved on the other two riders, not wanting them to risk their own race for the sake of ours—which now meant I was on my own in the middle of Mongolia with no idea where my fiancée was or whether she was safe.

Earlier in the day things had been going well. Sarah and I had galloped away from camp on Day Four of the Mongol Derby, officially the longest and almost certainly the toughest horse race in the world, traversing 1,000 kilometres through Mongolia.

The horses we’d been given for the leg were incredible: not only were they breathtakingly fast, but the way they placed their feet amongst rocks, hillocks and marmot holes was beyond belief. We even entertained the thought that, on steeds this fast, we might be able to regain some of the ground we had lost on Day Two, when Sarah’s horse had decided it wanted to walk the entire 25-mile stage. 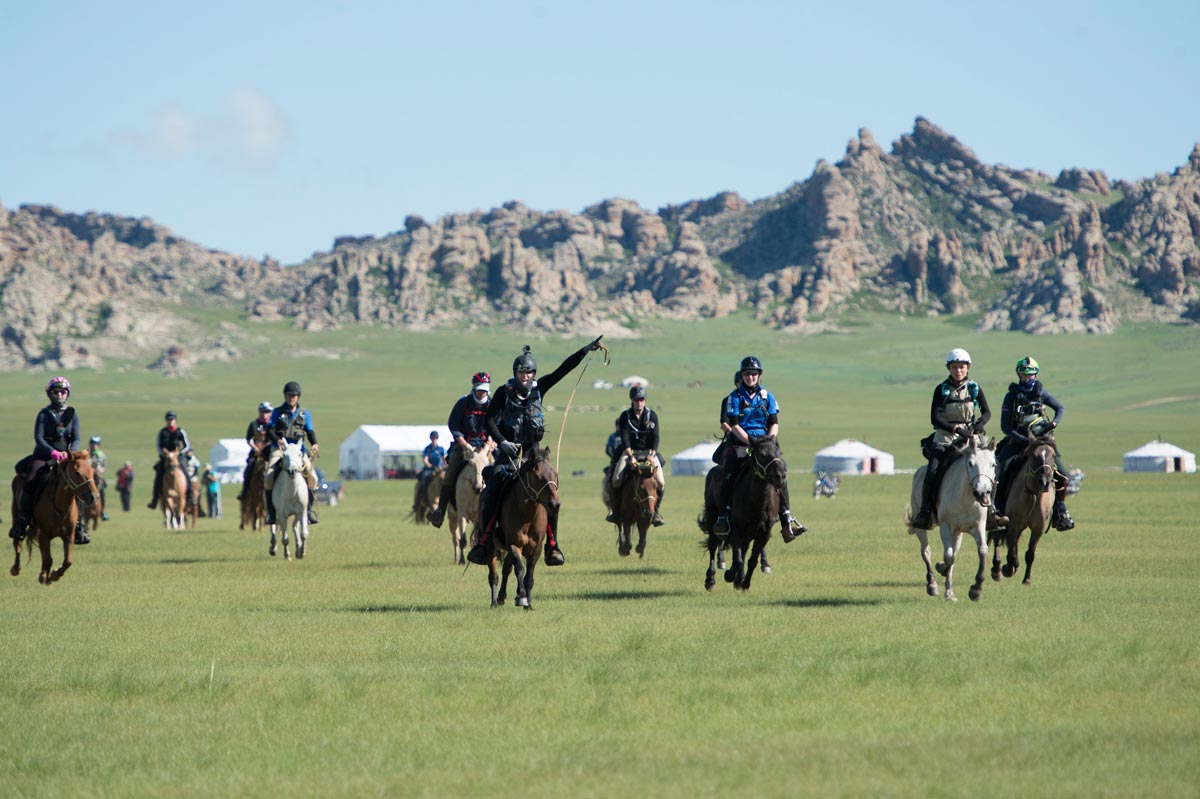 Riders at start of the Derby (Saskia Marloh)

But once we’d slowed down and joined two other riders, I made a major mistake. I forgot for a moment that the horses we were riding were still semi-wild. As we stopped briefly to graze the animals, I causally shifted my foot so Sarah could check whether my girth (used to keep the saddle on) was tight enough. The moment my boot touched the horse’s side it did a huge bronc, catching me totally off guard and sending me flying over its head.

As I hit the ground I had a split-second to decide whether to hold on to horse’s lead rein and risk serious injury or let go and potentially lose the horse. I decided the latter, but instantly regretted it: I watched in disbelieve as, complete with all my gear, the horse span on a six pence (to all the non-Brits out there, that means “turned on a dime”) and galloped back the way we’d come. Without a second’s thought Sarah asked, “Should I go after it?” and I, still slightly in shock, said “Yes” and watched her disappear in a cloud of dust. 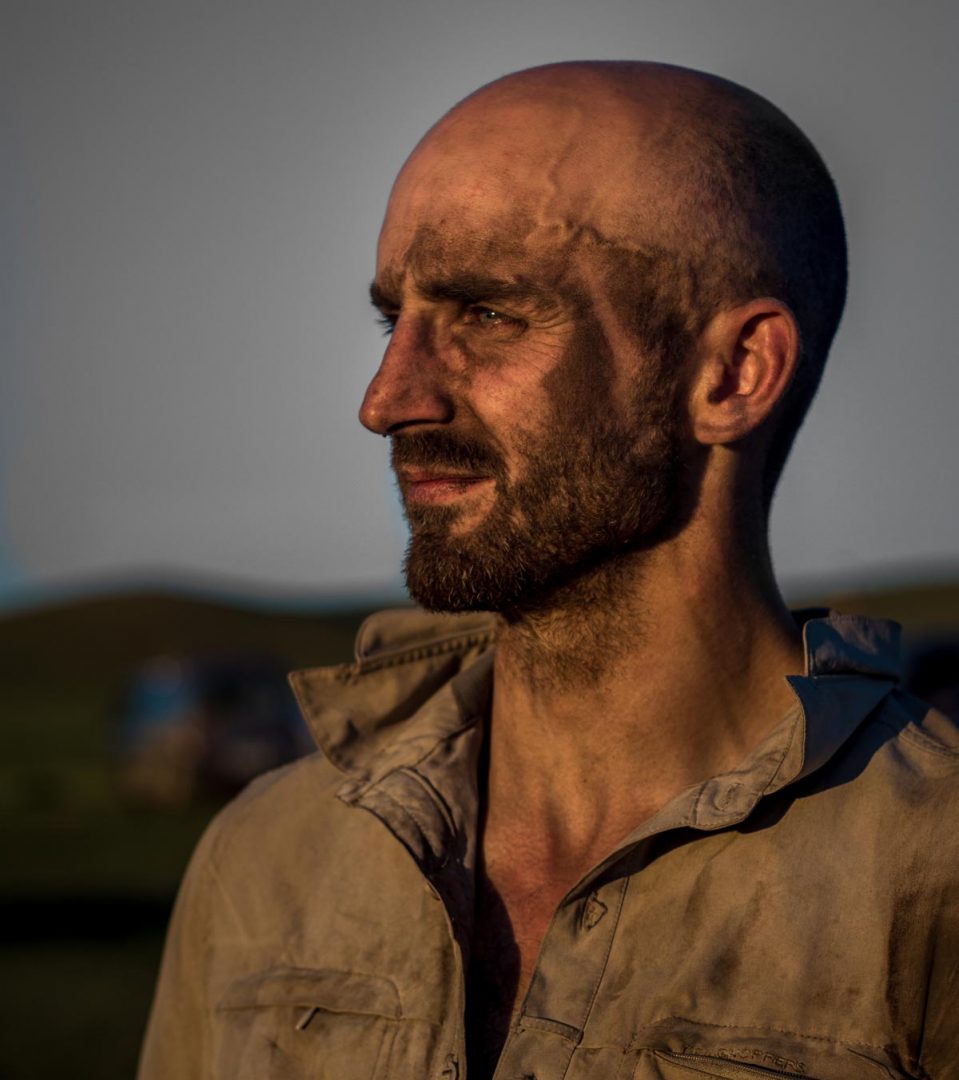 After the fall: Daniel waits for Sarah while she chases his horse into the distant woods. (Photo: Bat-Erdene Tsoodol)

Twenty minutes later there was still no sign of Sarah or either of the two horses, and I was starting to get worried. At the breakneck speeds Sarah had shot off at, a broken leg would probably be a best case scenario if she fell, and my only connection with the outside world was an emergency button on my tracking device, which all racers where obliged to carry.

A few minutes later, though—which felt like hours—Sarah appeared on her steed. She explained she’d nearly caught my horse, but after the chase entered a forest, and she had a close call with a low hanging branch, she’d decided things had got too dangerous. I couldn’t bring myself to call for help though and we decided to walk back for a bit and hope my horse had stopped to graze, offering a potential chance for me to remount.

Remarkably, we spotted the horse on a small hill, and I watched in awe as Sarah used her horsemanship skills to reign in the rogue horse. 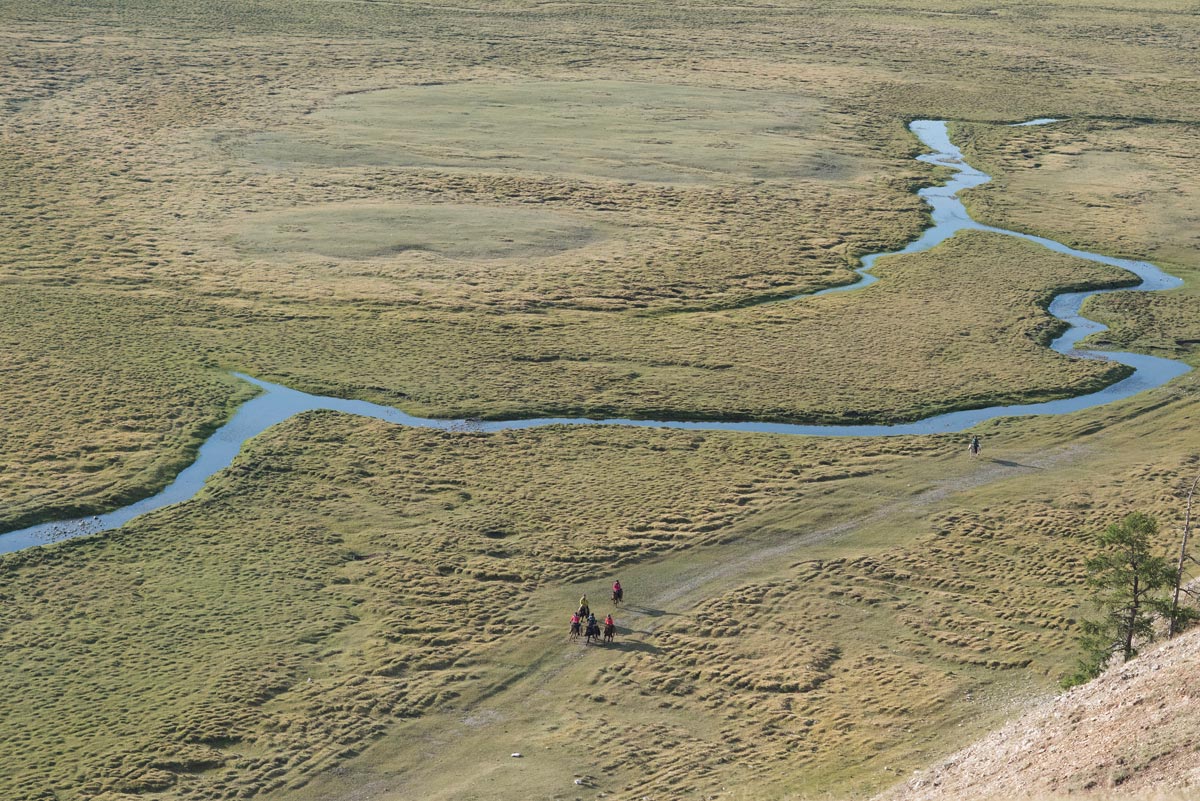 The loneliness of the long-distance Mongol riders. (Saskia Marloh)

Now aware that he could buck me off, the next 10 miles of riding where eventful to say the least. I managed to stay on for several episodes with my real-life bucking bronco, but came off another three. Aware that if I let go of the reins for a second time the chances were we’d not see the horse again, each time I came off I held on for dear life; even when I fell under the horse and felt hooves coming down on my back and legs. To say I was running on adrenaline when we got into that evening’s camp would be an understatement.

When the adrenaline had subsided however, and I had a chance to reflect on the day, my overwhelming feeling was that of pride; not with myself for surviving, but with Sarah for the way she unquestionably put her own life at risk to recover my horse.

It wasn’t the first or last time, during the nine and a half days racing, that I would look over at my fiancée and simply think, “Wow.” A day after dealing with the bucking bronco, the riding took us through mosquito-infested river valleys. That evening, when Sarah took off her riding tights, I was gobsmacked by the state of her legs. Hundreds of insect bites had swollen up and joined to form one big inflamed mass.

By far the worst bites I had ever seen, later in the week they would leave the entirety of Sarah’s hamstrings black from bruising, but not one word of complaint ever left her lips. Nor had it during the first days of racing, when temperatures had reached 38 degrees and numerous riders had to be put on drips for dehydration and the race favourite pull out after she collapsed with heat exhaustion for a second time. Nor later in the race when, in the mountains, we spent a full day in the rain and near freezing temperatures with riders fainting around us from hypothermia. 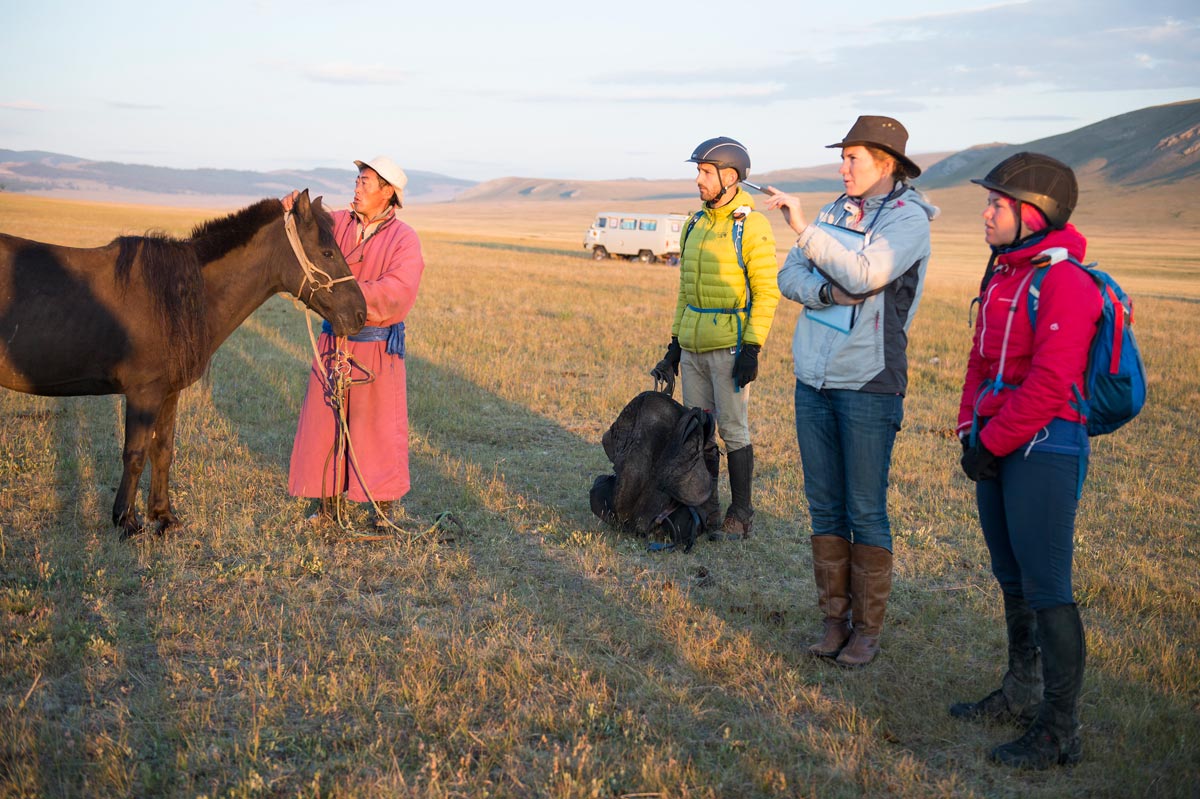 Daniel and Sarah choose their horses for the day. (Saskia Marloh)

It wasn’t just Sarah’s endurance that impressed me. Her commitment to ensuring each and every one of the 56 horses we used stayed safe and healthy reflected her true passion for the animals we rode. Even when one of her horse’s sunk up to his belly in a swamp, and I looked on uselessly in stunned disbelieve, she refused to dismount and gently encouraged the horse to keep moving and get itself out of trouble.

It wasn’t just Sarah’s endurance that impressed me. Her commitment to ensuring each and every one of the 56 horses we used stayed safe and healthy reflected her true passion for the animals we rode. Even when one of her horse’s sunk up to his belly in a swamp, and I looked on uselessly in stunned disbelieve, she refused to dismount and gently encouraged the horse to keep moving and get itself out of trouble.

During the whole 10 days there was only one moment where Sarah showed any sign of “weakness” and, although it was hard to witness her distress, it was oddly reassuring to be reminded that some of the feminine vulnerability that forms an important part of our relationship was still intact.

Sarah had been suffering, as many people on the race had, with digestive discomfort, but on Day Six was riding a particularly frisky horse she was understandably keen not to dismount until we reached the next camp. Whilst she managed to grit her teeth for more than 25km, eventually she had to quickly alight and, whilst still holding onto the reins, let nature take its course. Whilst I didn’t really think anything of it, it clearly affected Sarah and her morale and when we arrived into camp 30 minutes later, tired and exhausted, she shed a few tears—there was clearly a line she hadn’t wanted to cross.

The ride wasn’t just about difficult times testing our relationship’s strength, however, and there were beautiful moments we shared which will stay with us for the rest of our lives. Of the breathtaking sunsets we saw, inspirational nomads we met and stunning horses we rode it was an encounter early on the ride that I will remember most fondly. 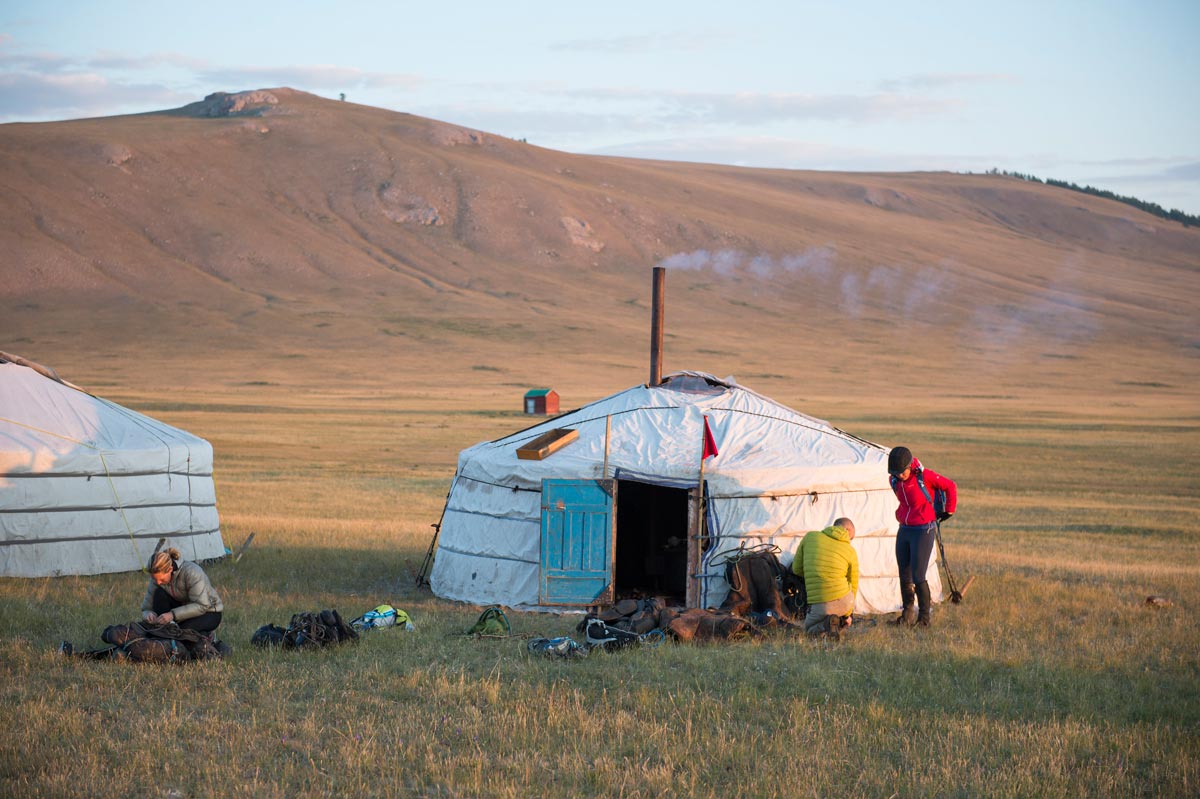 Settling in for a night at the ger. (Saskia Marloh)

On the first night of the race we didn’t make it to an official camp and instead spent the evening with a local family, whose hospitality I will never forget; as they cooked us dinner in their small ger—a nomadic tent home—they looked after our horses and made room for us to sleep. As we rode out of the valley where the ger was located, the following morning I looked over at Sarah galloping across a picture perfect meadow, with the sun rising behind rolling hills, and felt totally at peace with the world; if I can replicate that feeling just a few times in our marriage I know it will be a very happy one.

Doing the race together has not only given Sarah and I an experience we will share forever, and acted as an incredible test of our relationship, which I think we passed with flying colours, it’s also the first time in my life, so far filled with personal tests and challenges, that I’ve been able to truly answer the question, “Am I a strong human being?” My own personal hang-ups and inhibitions will never let me self-congratulate or acknowledge my own achievements too much, but having lived the world’s hardest horse race alongside my fiancée, seen the hardships she went through, and the incredible determination she showed in doing so, I know I must have done all right to complete it alongside her.

So now, only one question now remains for us: What next? **

Daniel and Sarah—heading to the altar in August 2016—raised money for the charities SEED Madagascar and Cool Earth, two organizations that help preserve at-risk environments and empower individuals who live there. If anyone is considering where to go on their next adventure, they’d hugely recommend checking out Madagascar and SEED in particular.

How to Travel with Your Pet

What Might Happen if Canada Sells off its Airports

Great story. Put’s me in mind of my brave sister, who 2 years ago went by herself on a horseback riding expedition in Mongolia (as she has been a life-long rider, horse lover and horse owner in the U.S.
She had the time of her life out there.

i’m a writer and looking to contribute a wilderness kayaking story to Outpost or some similar publications and looking for advice. My email: [email protected]. Thanks.