Monkeypox: What is it, and How at Risk are You, especially as a Traveller?

It’s frightening to think that another contagious disease—one that can make you pretty sick, with weeks of recovery—is making its way around the world.

Here’s what you need to know, and where you can go for more information.

Monkeypox does indeed sound ominous — it’s that “pox” — and chances are by now that you’ve seen photos of those skin lesions filled with pus (pustules) that people with the disease can get, sometimes all over their body. It’s a vivid reminder – as if we needed one – of how insidious some microbes can be to humans.

The current global outbreak — which, depending on if we get control of its spread, may become an epidemic, or worse — erupted about four months ago (May 2022) in London, England (likely at a large public event), and has been spreading to countries around the world where it’s not endemic. So far, as of late August, it’s still being classified by the World Health Organization as a “multi-country outbreak.”

According to WHO, there were more than 52,000 confirmed cases worldwide as of the end of August, but only 18 deaths. The United Kingdom had at last count about 3,340 cases, and 29 EU countries are reporting cases so far – more than 18, 460 (as of Sept. 1), with Spain, France, Germany, Netherlands, Portugal, Italy and Belgium having the highest number of cases to date. The United States now has over 19,465 confirmed cases (as of Sept.1), Brazil (and to a lesser extent) Peru are showing larger outbreaks. And in Canada, there are 1,289 confirmed cases (as of Sept.1) mostly in Ontario and Quebec.

As the disease proliferated in June and July of this year, the situation was classified a “Public Health Emergency of International Concern” by the WHO, which should trigger protocols for international cooperation and containment measures. Here in Canada, the Public Health Agency of Canada (you know who they are by now) updates the Canadian monkeypox stats weekly, but to find out the situation where you live, check with your local public health department or authority.

Of course, as in all disease outbreaks, the above stats will change rapidly (either up or down), and will be outdated almost as soon as this is published. But for the lay (as in non-medical) public (as in you and me) to keep track of a country or local situation is wise – it’s about trying to gauge a disease outbreak’s risk factor in your community, and to yourself.

Though monkeypox appears quite a nasty disease (again, those lesions), luckily, it’s proving much less lethal than COVID – and for that matter it’s sort of viral cousin, smallpox. But it is highly contagious, and can make you quite sick, with possibly weeks of recovery. It’s just wise to keep in the know.

According to the Centers for Disease Control and Prevention (CDC), these are the symptoms of monkeypox disease: 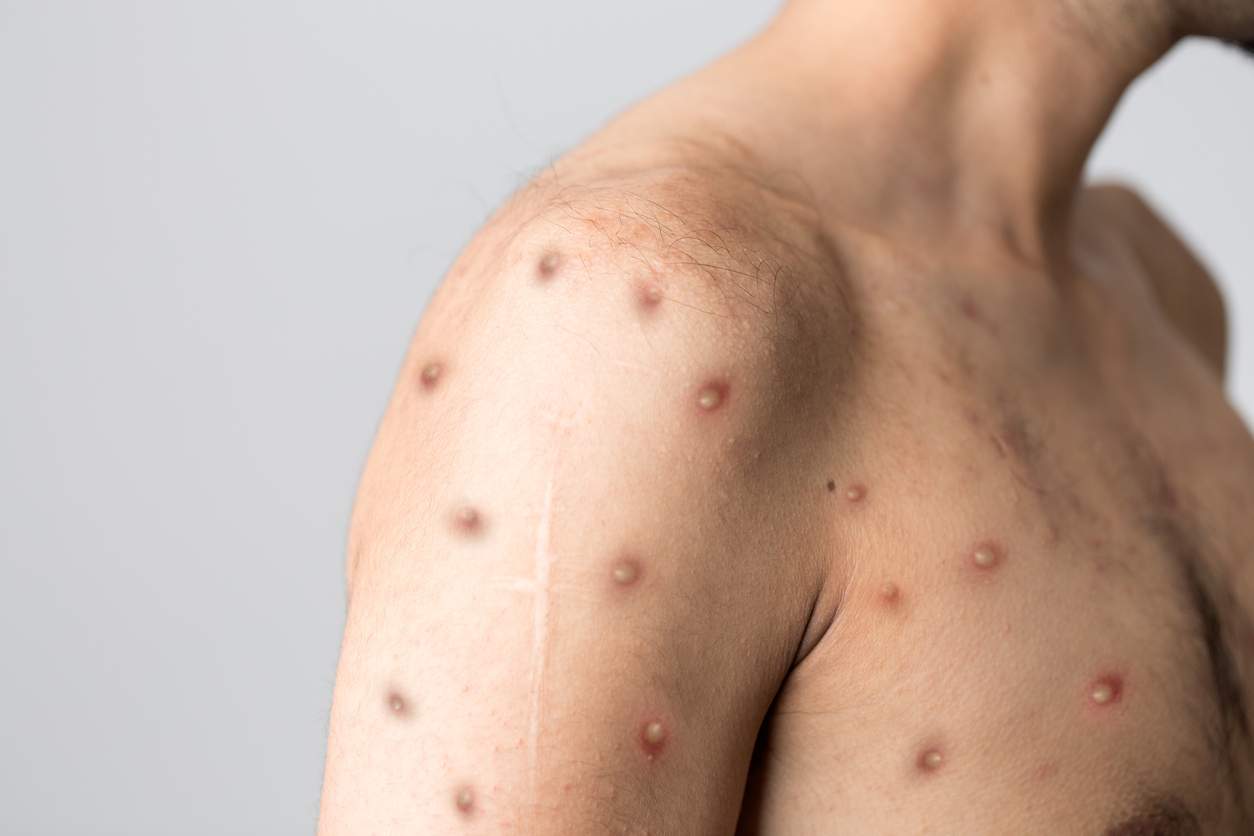 The monkeypox rash manifests as pus-filled lesions all over the body. They’re itchy and infectious, but self-limiting, meaning they eventually crust over and fall off. The rash as depicted here though, can be worse. (Credit: Berkay Ataseven/iStock) 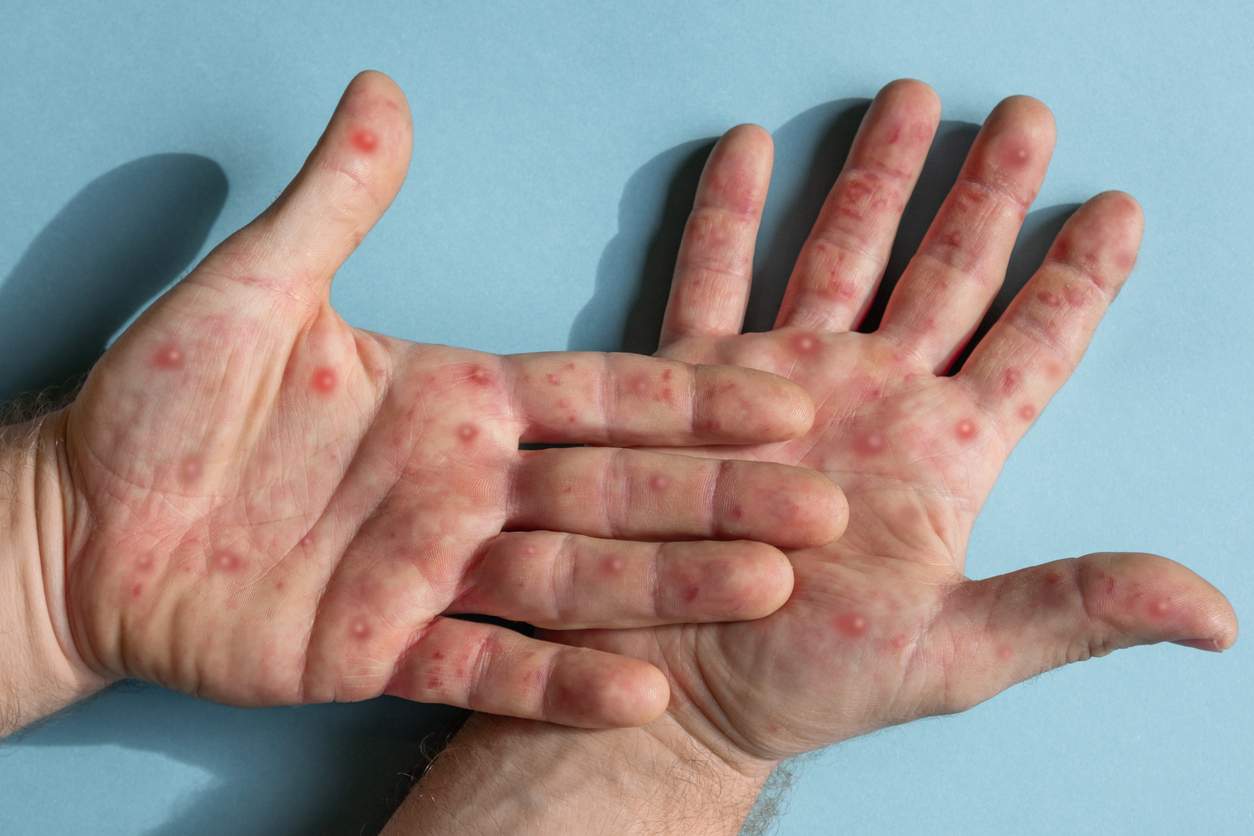 You can get some, just a few, all of, or any combination of these symptoms, which typically develop from 5 to 21 days after exposure and can take from 2 to 4 weeks of recovery. The Public Health Agency of Canada describes it as self-limiting (it resolves on its own after a period of time), but it’s worth noting it’s proven deadly in some cases. And of course, you have to isolate/quarantine so you don’t infect others. (Yes, you’d be back to that.)

Monkeypox is particularly insidious in that it’s spread by contact with an infected person, yes — but in a number of different ways. According to the CDC, these are the most common modes of transmission: contact with the infectious rash (lesions) and its scabs, or the body fluids of an infected person, skin-to-skin; contact with respiratory secretions, face-to-face; intimate contact such as sex, kissing, cuddling and hugging, prolonged face-to-face contact; and even touching surfaces and items (like clothing or bed linens) that may have the virus on them.

If you think you came into contact with someone with monkeypox or have been exposed to the virus, the PHAC says to contact your local public health authority immediately. They should guide on what to do next.

Why travellers should be in the know and on the ball

The monkeypox virus is from the same family as smallpox — a disease so highly infectious that it killed up to 300 million people in the 20th century alone. It also has the distinction of being the first (and only) infectious disease that has been completely eradicated — that was done by 1980 by mass human immunization. (See how that can work?)

Monkeypox is classified as a zoonotic disease — meaning it can jump between species, including from animals to humans (but also vice versa), and becomes really threatening when it starts to easily transmit between humans.

The virus mostly occurs in the rainforest regions of West and Central Africa, according to the WHO, with animal hosts that, yes, may include primates, but also possibly rodents and other forest animals — likely the reason the disease has been endemic there possibly for centuries. In fact, in the (renowned) science journal Nature, there’s a compelling article detailing how “African researchers have been warning about monkeypox outbreaks for years,” and they’re now worried that as “vaccines are deployed globally” the people most at risk — those living where it’s endemic and naturally occurring — “will be left behind.” It’s a call to action, and we encourage you to read it.

Once the virus jumps from rainforest animals to humans, it starts making its way into human communities. And, of course, takes flight around the world through travel, and via travellers and human interaction. Which is why travellers always have — and have always had — such incredible responsibility to just be in the know, and yes, get vaccinated, if a vaccine is available.

And yes, there is a vaccine for monkeypox. 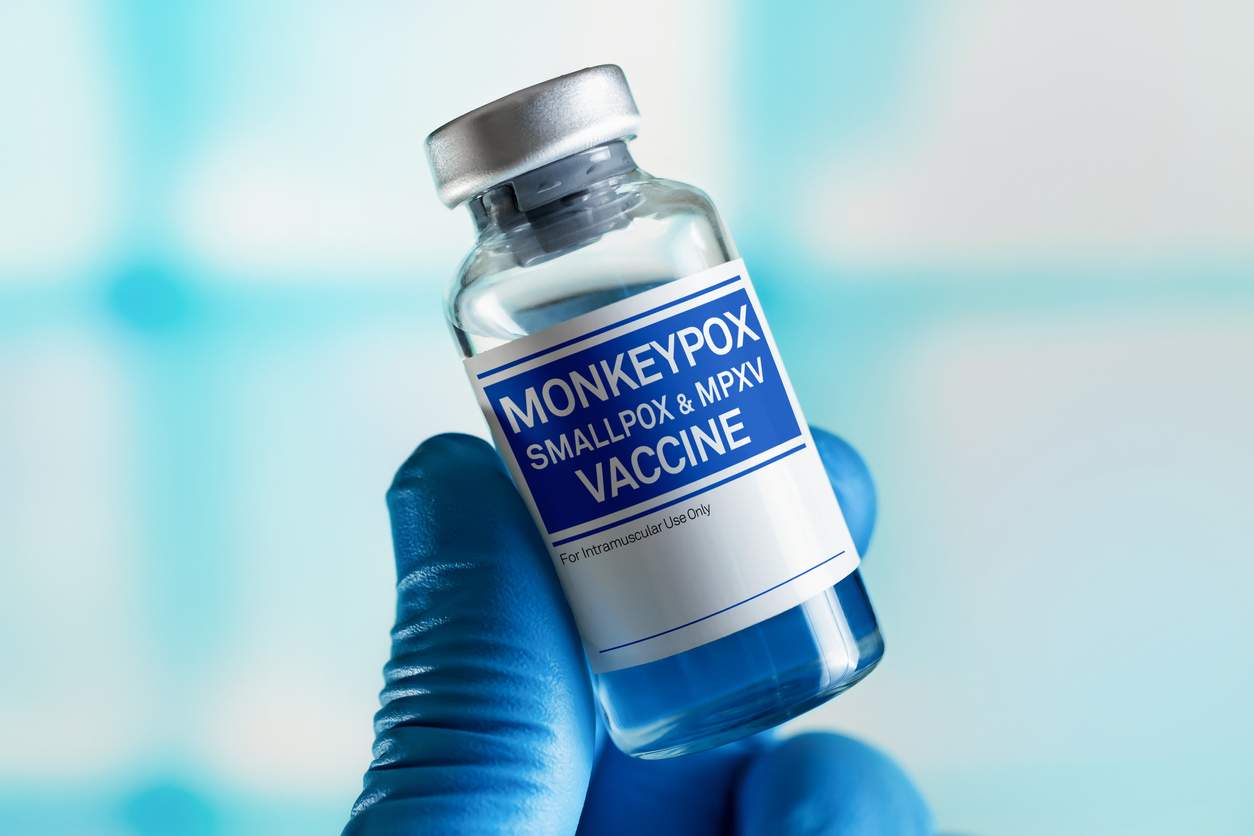 There is a vaccine for monkeypox, and as supplies are currently limited, it’s worth investigating if you qualify for it, or are in the group currently considered most at risk. (Credit, stock photo: angelp/iStock)

So far, the vaccine is being targeted to the highest risk groups and people — likely pending as more quantities are developed. And so far, in this particular outbreak, that’s been identified by the WHO, CDC and other public health authorities as “men who have sex with men (MSM).” (To read more about who’s at risk and how, the CDC has a great fact sheet here.)

However, we can’t stress enough that any disease that’s classified as “communicable” to humans does not discriminate by gender/sex, sexual orientation, race or age (though age may make it impact differently), and of course not by your country of origin or nationality or political/party affiliation, or whether you like ice cream over whip cream on your pecan pie. Humans are composed largely of the same ingredients, and at any given point in our lifetime can be classified by circumstance as in a high-risk group. One thing we’ve learned over the past two years is that we’re all in this together, and only defeat diseases by looking out for each other.

The PHAC a great monkeypox fact sheet on advice for travelling during this current multi-country outbreak — it’s actually called Monkeypox: Advice for Travellers, and states that if travelling now “be particularly vigilant if you are planning to attend gatherings or events that entail close, prolonged and frequent interactions among people, in particular sexual activity. Outbreaks of infectious diseases have been linked to travel abroad and social and mass gatherings.”

How at risk are you as a traveller?

Overall, it’s worth asking about getting vaccinated (if that’s possible for you at this time) if you’re planning on travelling in the near future, especially to Europe or a country where it’s endemic. For that, you can start by contacting your local public health department or authority.

But also be sure to make an appointment at a qualified travel-health clinic — which we think is always the best place/source to start if you’re planning on travelling at any time, to almost anywhere. Travel-health specialists are terrific sources of information on not only vaccines you should have to where you may be going, but also have great tips on prevention for almost any health risk you could encounter, and will answer specific questions you may have. 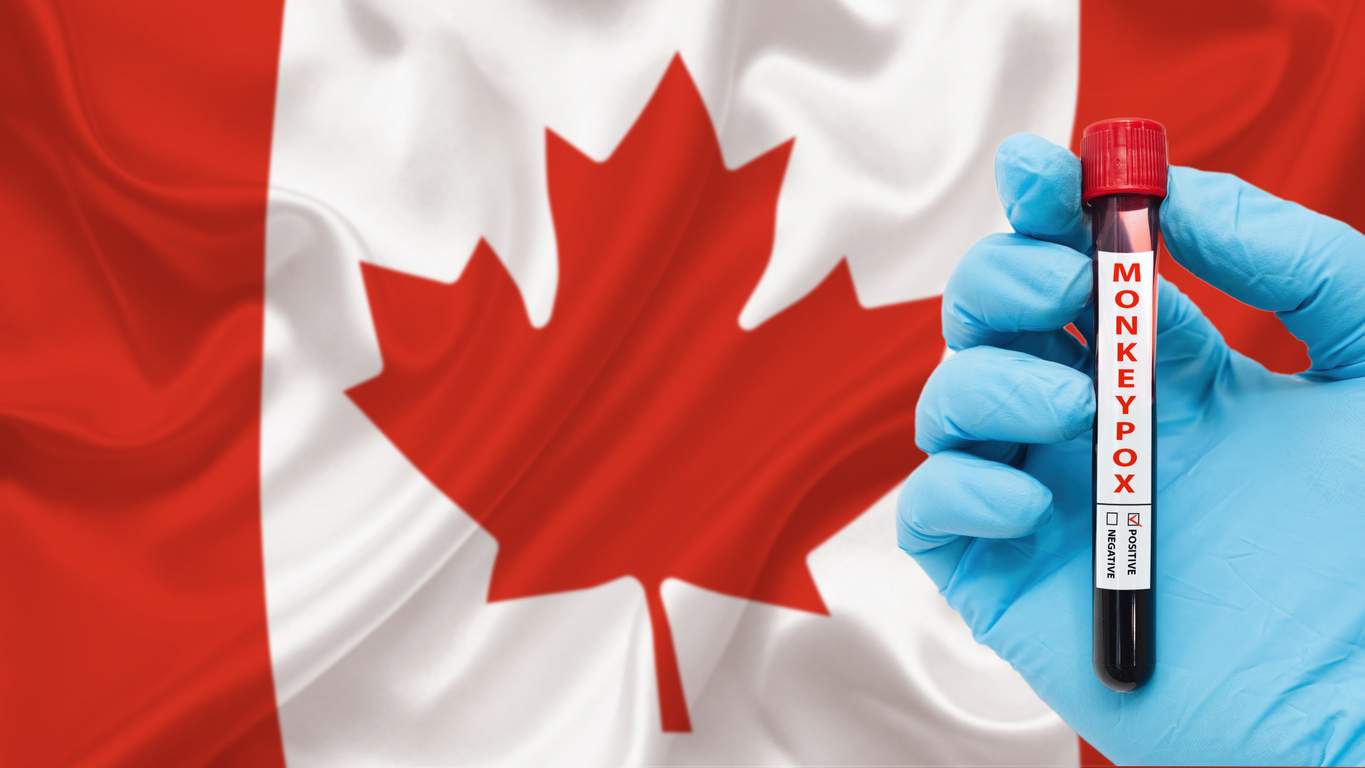 As a traveller, you have immense responsibility. Be in the know of any health or disease risk you may be taking with you to a destination (please try not to do that), or from it to back home. Travellers are always the way diseases make their way around the world. (Somboon Kaeoboonsong/iStock)

Once in your destination, know the local situation, and be careful to take precautions when there. And always, always (always) purchase or ensure you have travel-health insurance before you cross any border, or board any plane or train.

Be wise and immunize is an old public health mantra. You’re wise to do it when and if you can. As we should all know by now, people in developing countries, and those most disenfranchised in your own, are always the ones most at risk of dying. You’re not just protecting yourself when you get vaccinated or take precautions — you’re protecting all the rest of the humans on this planet where you live. ♦

The SafeTravels Stamp by the WTTC | Setting...

Where Do We Start? Rethinking Travel, and Why

Whether in the Wild or Abroad, How To...