Location: in Hungary, a landlocked country in East-Central Europe, right on the Danube River. Budapest is its capital

Religion: Predominantly Christian or nonreligious, but with Catholics comprising the largest single group

Climate: Budapest has a humid continental climate with four distinct seasons. Summers are warm, with periodic heat waves reaching 32–35°C in June, July and August. Winters are cold, with temperatures hovering around 0°C and frequent snowfall.

Budapest is a wonderful city to explore on foot, so it’s best to go when the weather is good for walking. The climate is generally mild and sunny during the spring and early fall, from March to May and September to November. During these months Budapest is quieter than during its busy tourist season of summer, making it an optimal time to visit.

Those who love the arts may want to plan a trip during the second half of March, when the Budapest Spring Festival fills the city’s theatres and churches with dance, jazz, folk, and classical music performances.

Most foreign visitors arrive in Budapest via the Franz Liszt International Airport, the largest hub in Hungary. There are direct flights to Budapest from many European countries, as well as from several major cities in North America and the Middle East. From key Canadian hubs, flights generally include stopovers but are readily available.

READ: My Budapest: a Traveller’s Take on Hungary’s Great Capital, by Ailsa Kay

Hungary is also well connected to Eastern and Central Europe by train, with numerous rail lines arriving and departing from Budapest’s three major stations to the east, south, and west of the city. From Vienna, Austria, the train to Budapest takes less than three hours.

As a city, Budapest is divided into two major sections: Buda, to the west of the Danube; and Pest to the east. Bridges connect the two districts, and Budapest’s extensive public-transportation system serve all major neighbourhoods in the city on both sides of the river. The city centre is linked by a historic four-line underground metro system, first opened in 1896. With an even wider reach, Budapest’s famed tramway network is one of the biggest urban streetcar systems in the world, with scenic routes running along the Danube in both Buda and Pest. There is also a smaller network of trolley buses in Pest only.

Most of Budapest’s major sights, restaurants and shops are located in the densely populated district of Pest. Start your tour at the iconic St. Stephen’s Basilica, the largest church in Hungary, and climb to the observation deck for excellent views of the city. Just north, take a guided tour of the impressive Hungarian Parliament Building, a Gothic revival masterpiece right on the banks of the Danube, built at the turn of the 20th century and widely lauded for its architectural beauty.

Another architectural treasure, the Great Synagogue on Dóhany Street in the Jewish Quarter, is a beautiful 19th-century landmark, designed in a striking Moorish style. Open to visitors, its gorgeous interiors were fully renovated in the 1990s. For a historical perspective, the city’s moving Jewish Museum is located next door.

Across the river in quieter Buda, walk or take the funicular to the top of Várhegy, or Castle Hill, where you can visit the Royal Palace and take in breathtaking views from the historic Fisherman’s Bastion. Also in Buda, the ruins of the former Roman city of Aquincum, built in the second and third centuries, still contain the remains of its great amphitheatre and stone statues. 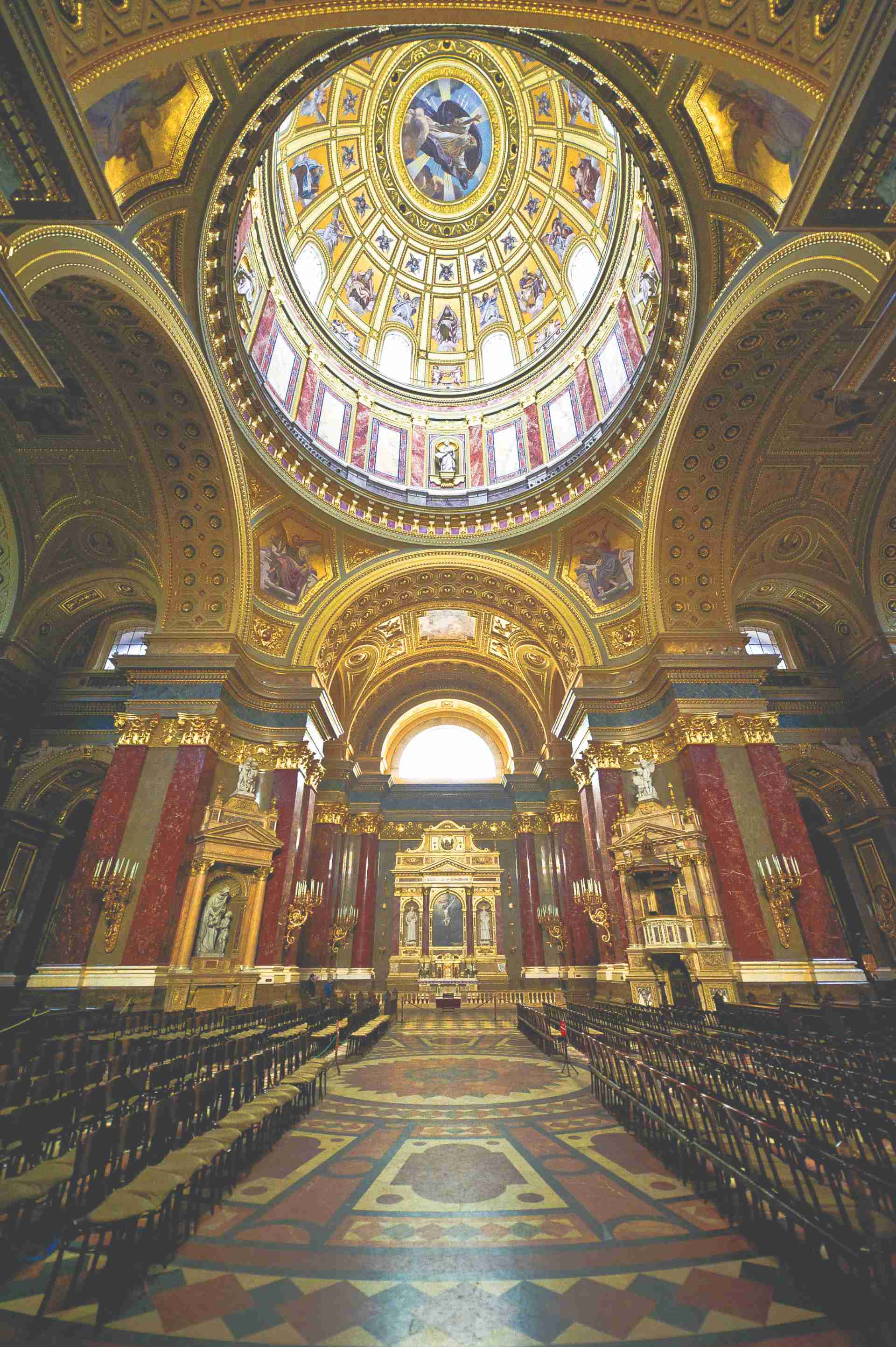 Interior of St. Stephen’s Basilica, with its magnificent dome. (Thinkstock)

Budapest’s old-fashioned atmosphere will appeal to travellers looking to experience a traditional European capital. To soak up the city’s flavour, ride a tram along the Danube, savour a traditional Hungarian pastry in one of the many charming pastry and coffee shops, or stroll along Váci Street to Central Market Hall, where you can sample a wide range of traditional snacks and foodstuffs. It is also worth booking tickets to a performance at the State Opera House; the famed venue is known for its excellent acoustics.

Budapest’s natural thermal waters are a major attraction for both Hungarians and international travellers. Fed by two natural springs, the expansive Széchenyi Baths, located in a baroque building in City Park, are the largest thermal pools in Europe. Alternatively, you can also make a day of it by taking the tram to Margitsziget, or Margit (or Margaret) Island, in the middle of the Danube River, where numerous outdoor pools are filled with warm, natural water.

About 24 kilometres south of Budapest, on the shores of the River Danube, is the famed artist community of Szentendre, a breathtaking little town known for its many galleries and churches. It’s an easy and popular day trip from the capital.

My Budapest | a Traveller’s Take on Hungary’s Great Capital

Arctic Norway | On the Cusp in the Fleinvær Archipelago