Walking through Tokyo is like stepping into a science fiction film — especially at night. Not because the 1982 movie Blade Runner took inspiration from the bustling neon alleys of Shinjuku’s Golden Gai nightlife zone, and futuristic buildings shot after dark in neo-noir style, but because this city manages to pack so many different types of buildings into its ever-changing streets.

When it comes to planning, Tokyo is one of the few modern capitals to have offered architects a semi-blank slate. Pair this with forward-thinking city councils and a deep cultural fascination with technology, innovation and efficiency, and the end result is one of the world’s most exciting urban experiments.

Much of the city was destroyed in the 20th century, levelled by the Great Kanto earthquake in 1923 and fire-bombed during World War Two. But like Berlin, those vast empty spaces saw new creations rise from the ashes. 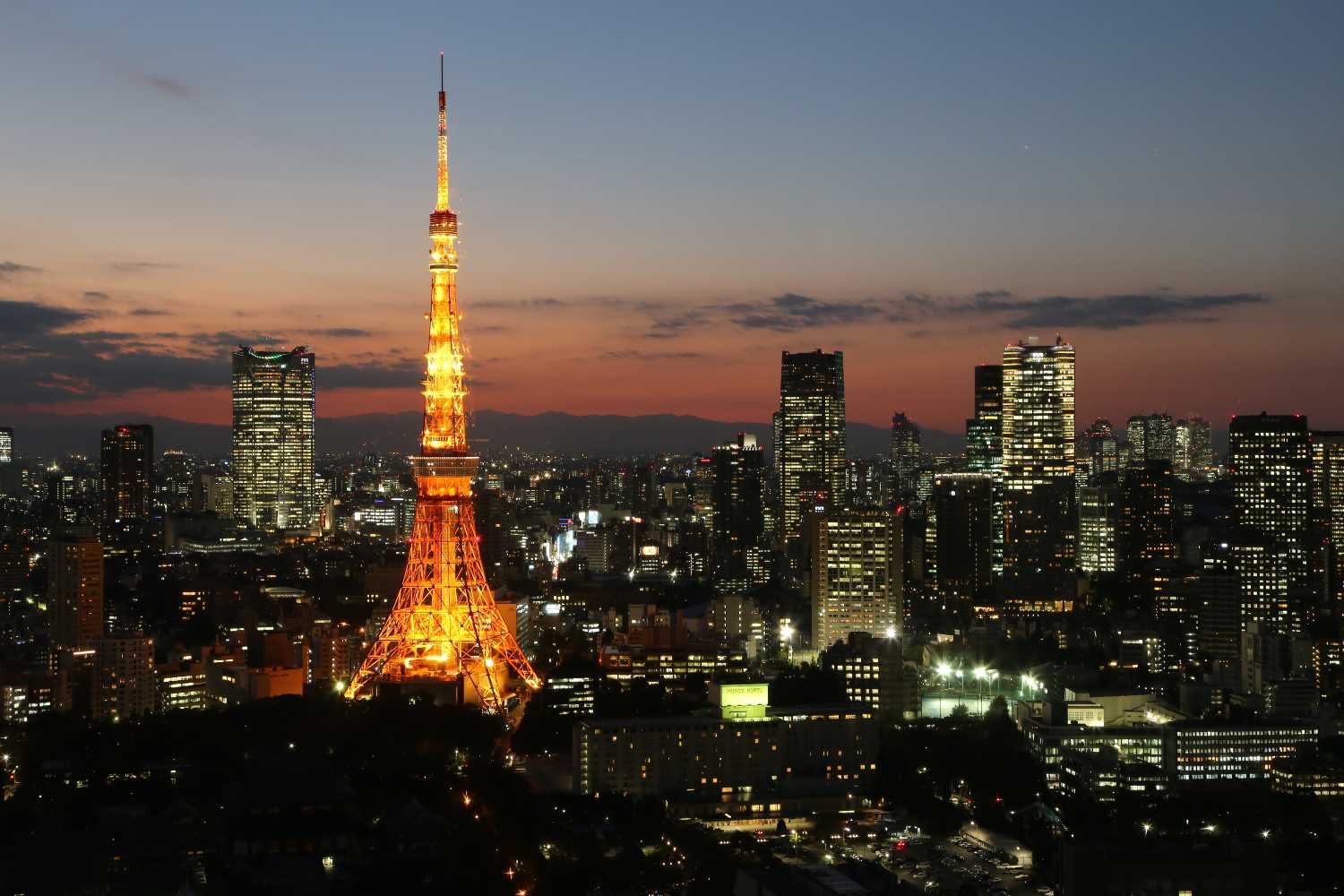 This photo and above: spectacular Tokyo Tower. (©Yasufumi Nishi/©JNTO)

For the walker, this can leave one feeling slightly unhinged; buffeted by gusts of change or drifting through a prism where time has been fractured like a mirror, with each era reflected simultaneously in the glowing shards. But there’s a strange harmony about it. Somehow it just seems to work.

Many visitors ease their way into the city by way of the past. If you arrive at Tokyo Station, go outside through the western (Marunouchi) exit. The brick façade of the original station dates back to 1914. Few stone buildings survived the Great Kanto earthquake, but architectural traces of the Meiji-era still exist, though it takes a little effort to find them. Look for the Neo-baroque Bank of Japan building in Nihonbashi, and the former Ministry of Justice in Chiyoda-Ku.

If even older buildings are your thing, you’ll want to visit the Edo Tokyo Open Air Architectural Museum, where you can stroll through historic buildings from expensive homes to public baths.

Modernity, on the other hand, is everywhere. As a visitor, you’re most likely to encounter it first in Shinjuku as you exit the world’s busiest commuter station (it handles more than two million passengers each day).

Tokyo’s “skyscraper district” is home to many eye-catching structures, but my eye is always drawn to the elegant tapering mesh of the Mode Gakuen Cocoon Tower. It’s a vertical high-rise campus, home to three schools and some 10,000 students. 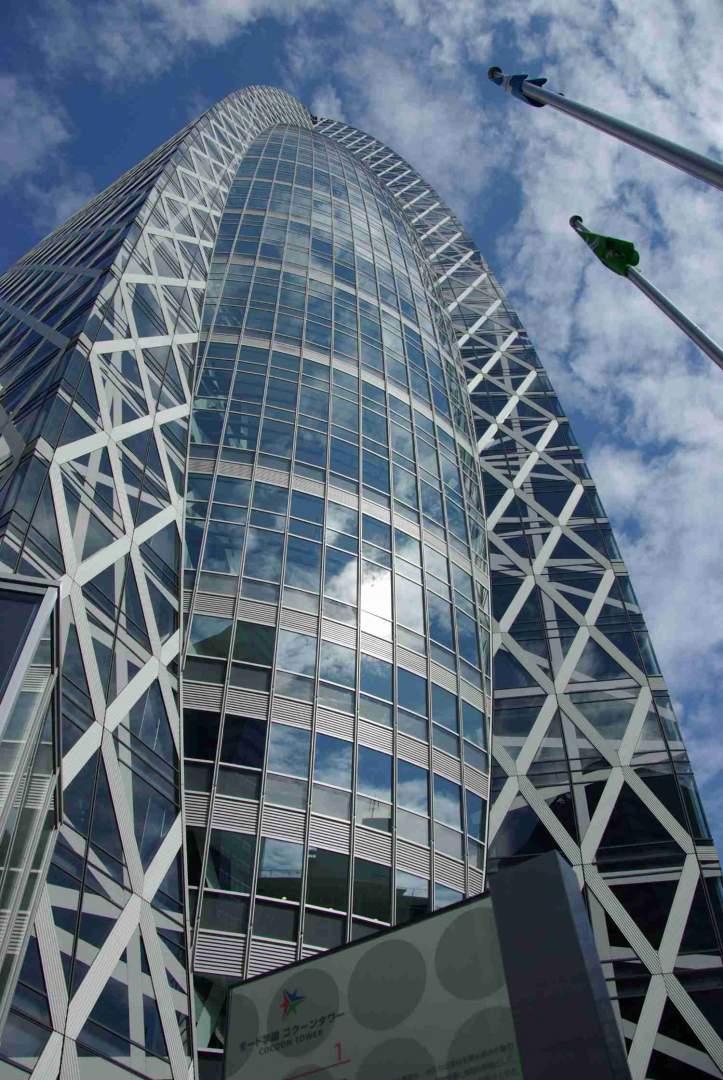 If sci-fi is more your thing, you’ll want to go to Odaiba, the high tech entertainment hub on an island in Tokyo Bay. It doesn’t get more otherworldly than the Fuji Sankei Building (home of Fuji TV), the rectangular skeletal structure with the huge metal sphere in the centre which dominates views of the island.

Odaiba is also home to the huge inverted pyramids of Tokyo Big Sight, the city’s International Exhibition Centre, and a life-sized Gundam statue of the popular anime robot. 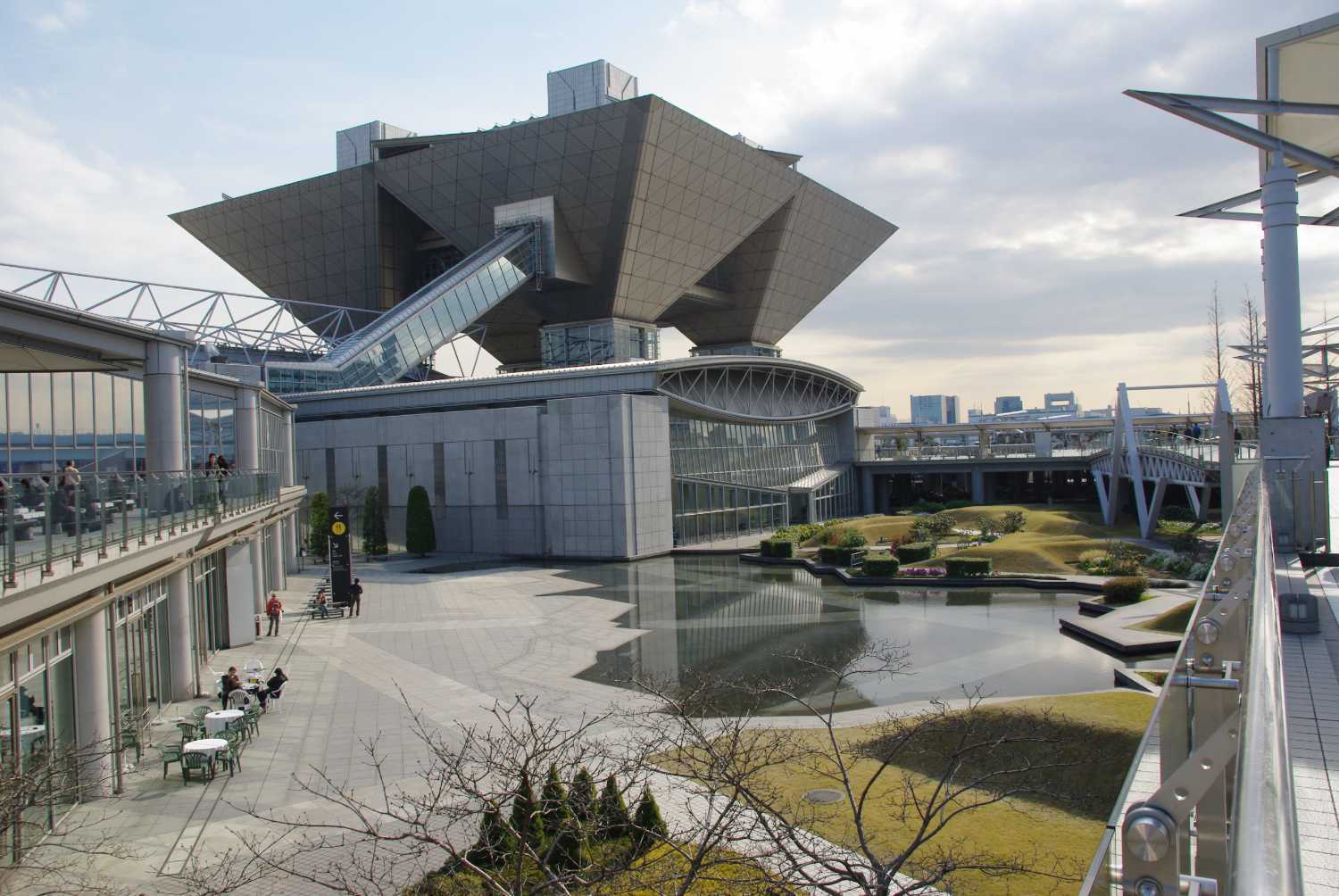 But metal isn’t the only medium on display in Tokyo. You’ll also find innovative designs in concrete, like the National Museum of Western Art, one of Swiss legend Le Corbusier’s lesser-known Modernist creations.

Concrete is also the hallmark of Brutalist architecture, like the Nakagin Capsule Tower by Kisho Kurokawa, where self-contained prefab “living capsules” could be replaced, moved, or connected to other units. The movement that spawned this and other strange buildings, including the Shizuoka Press and Broadcasting Tower in Ginza, is known as Metabolism, a post-WWII Japanese architectural movement. It emerged in the 1950s and 1960s, and embodied concepts that remain at the heart of this city’s approach to contemporary architecture.

Metabolism explored the way buildings — like human bodies — grow and evolve, changing their function to meet changing needs. And that idea sums up so much about Tokyo, too.

You could spend a lifetime exploring the changing streets, structures and skyline of this city. But don’t forget to step back and take a wider view. Tokyo is vast. It sprawls to the horizon, creeping into mountain valleys on the outskirts, and gently nudging against the sea. It’s impossible to take it all in at once, but you can gain an appreciation for its incredible scale by taking an aerial view.

My favourite place to appreciate the cityscape by night is the free observation deck on the 45th floor of the Tokyo Metropolitan Government Building (Tochō). It’s not the tallest viewpoint in town, but it holds a special place in my heart because it’s where I first looked over this city on a quiet night 20 years ago. I stop by Tochō every time I’m in Tokyo.

If you’re a traditionalist rather than a sentimentalist like me, you’ll likely head for Tokyo Tower, Japan’s iconic orange and red answer to Eiffel’s creation. Built in 1958, at 333 metres it’s a little higher than the Paris landmark, and it’s probably the most romantic viewpoint in town.

But Tokyo Tower is no longer the city’s highest point. That prize now belongs to Skytree. At 634 metres, Skytree is the second-highest building in the world, and the tallest freestanding structure. It’s also the place where I had the best matcha ice in Tokyo. I don’t know what made it so good, but I’ve gone all the way over there on subsequent visits just to buy an ice cream cone from that shop in the tower’s base. 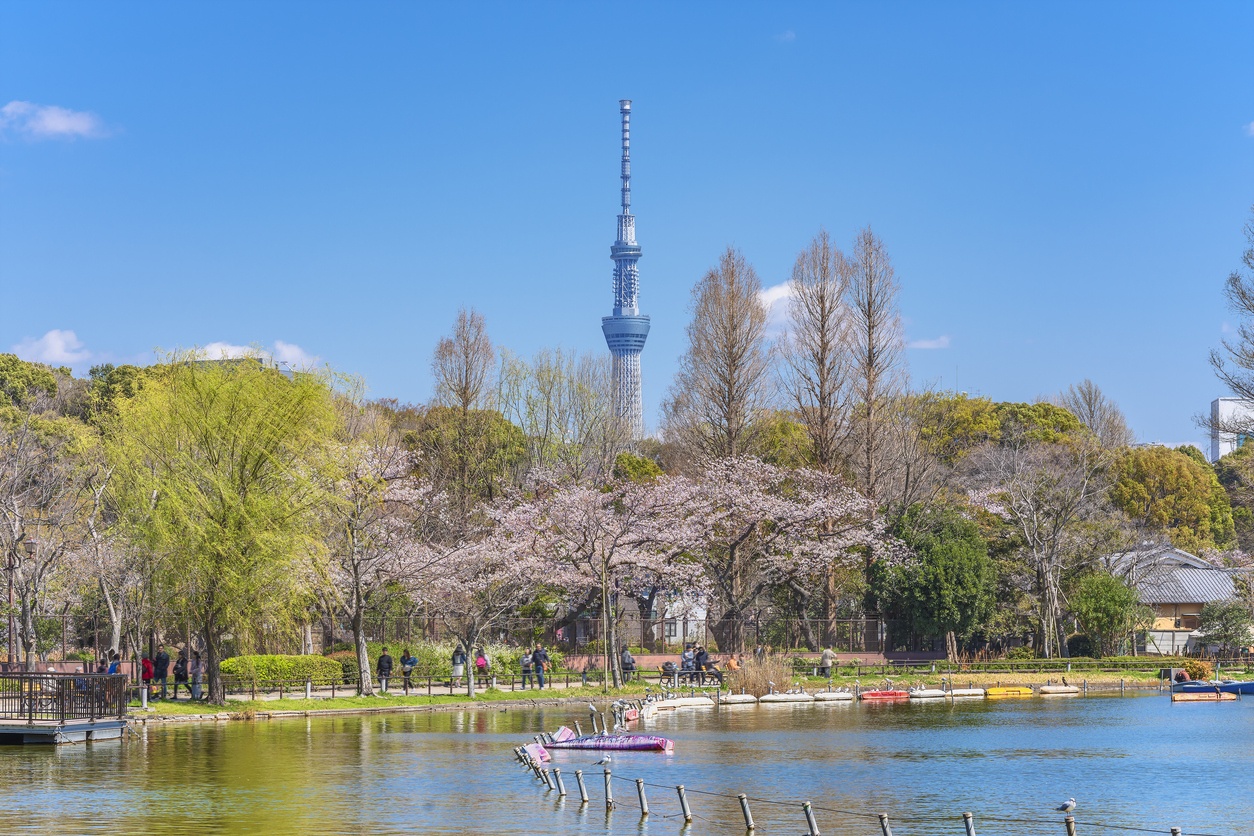 Tokyo Skytree and the cherry blossoms of Shinobazu pond. (©Kuremo/iStock)

When you’re ready to ascend, an elevator will whisk you up to the Tembo Deck (at 350 metres) in an astonishing 50 seconds. And you can go higher still, to the Tembo Galleria, where you’ll take in the city — and the curve of the Earth — from 450 metres. You can even see Mount Fuji on a clear day.

While going up the world’s second-tallest building might seem crazy in a country that experiences about 1,500 earthquakes every year, and minor tremors somewhere roughly every five minutes, I barely give it a thought.

That’s my favourite aspect of Tokyo architecture; not the external designs, but what happens behind the scenes. When it comes to designing buildings to resist earthquakes, Japan is the world leader.

Tall buildings are built around a central axis that shifts and flexes like a spine. Seismic dampers installed between floors reduce some of the movement and absorb vibrations. And the columns that meet a building’s foundations deep underground rest on giant shock absorbers, often in the form of thick rubber pads.

It’s a very strange feeling to be dining on the 45th storey of one of those skyscrapers when an earthquake strikes. You can be forgiven for thinking you’ve had too much sake when the floors start moving back and forth like a ship swaying at sea. I can’t say I enjoyed it very much. But I was in awe of the ingenuity that made it possible for us to go on with our dinner, with only a few nervous chuckles to break the mood. ♦