I am told in a semi-screaming voice to “be loose!” and I think what a paradox that is as the motorbike underneath us gallops downward, tires chewing gravel.

To call these “roads” is to upsell them 100 percent. They are mountains. Mountains with, naturally, two extreme angles: roller-coasting up and nosediving down. On the back of a motorbike, both directions feel a lot like falling.

Mustang (pronounced Moo-stahng), is a remote region of Nepal bisected by the Himalayas and nuzzled against the Tibetan border. The entire district lies within the Annapurna Conservation Area, the largest protected area in Nepal. A signpost acclaims Mustang for its “unique landscapes and cultural traditions,” which is a gross understatement for a land that harbours the last remaining Tibetan culture on earth.

The region is split like the Koreas, north and south (upper and lower), with the north being the harder one to access. Until 2008, Upper Mustang banned tourists entirely to preserve their near-extinct Tibetan culture. Today, tourists can enter Upper Mustang with a $500 permit and an official guide.

We were headed to Lower Mustang, accessible with just two $40 permits, the ceiling of which ends at Muktinath Temple, 3,710 metres high. 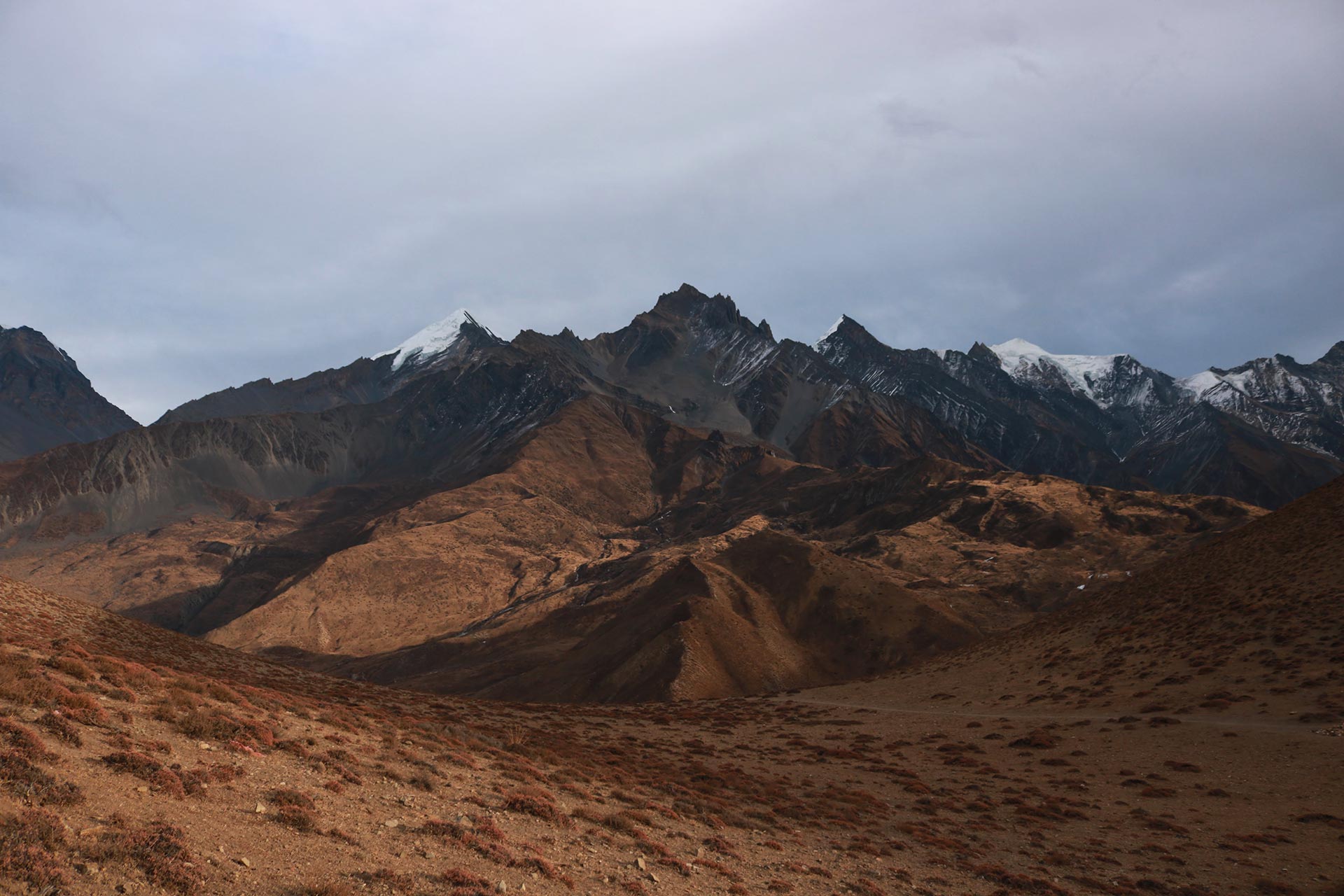 The mountains of Mustang.

When you first meet a Nepali, they will ask you five questions. After they’ve had you sit down, they’ll inquire about your name, country, marital status, whether you like Nepal and which places in Nepal you have seen. Whether or not they’ve seen it themselves, they’ll ask if you’ve been to Mustang, a region hailed for its natural beauty.

But it wasn’t the natural beauty that brought me to Nepal. It was what the country lacked that initially attracted me. Trash cans, for instance. Modern bathrooms. Proper roads.

“I want a challenge,” I told those who asked why I was leaving modern conveniences and a paycheck in Seoul, where I lived for a year prior.

Ask and you shall be given.

The road to Mustang is meant to be trekked, but tell that to a Nepali. Renzi, who had become my fast friend and travel companion, goes nowhere without two wheels. He was born in Nepal, but first saw the Himalayas on a hiking trip with me a few months earlier. Hell, that was even the first time he hiked.

The two of us were in Kathmandu to extend my expiring Nepal visa when a travel brochure I’d picked up and had been using as a bookmark fell out from the pages of Video Night in Kathmandu. He picked it up to look at a photo of barren desert.

“Okay,” I agreed without hesitation. I knew we’d be taking the bike. Motorbikes seem to outnumber people in this small developing country, where the government taxes an obscene amount to purchase a car and most non-commercial traffic comes in the form of bikes and scooters. 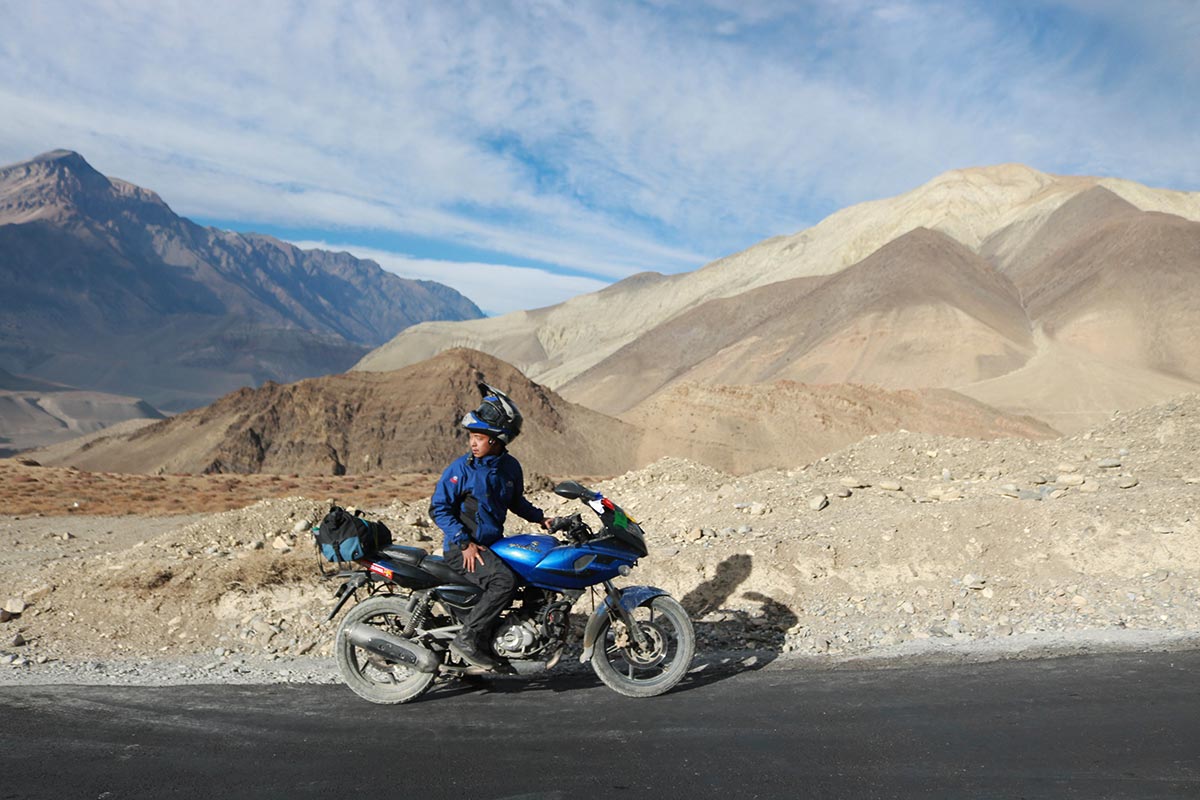 Renzi on the bike.

The bike allows us to see more, and to see it better. As trekkers commonly fly in to Jomsom, they miss the joy of half the trip. One of the most impressive things about the ride to Mustang is how many times the scenery changes, as if a curtain were pulled down and another backdrop pinned up. You go from forested to rocky to desert within a three-day drive.

There are natural hot springs and a lake in the shape of a heart. Each time we round a bend and the landscape shifts, curse words slip out like prayer, in a way that they somehow don’t when the snarled road dares us not to fall.

“Be loose!” Renzi, whose normal demeanor resembles Buddha, snaps again when I nearly throw off our balance by putting my foot down as our bike fishtails in mud. He shows me by moving his body abruptly and spastically from side to side, bringing the handles with him. “The bike will do what you do. You must move with the bike.”

He waits until the second day to tell me that my body is like cement. “How,” I ask him through an eruption of laughter, “do I improve such a thing?”

At the inclines, I should lean forward. Declines, back. No rigid posture. Keep my body low. “You know what, just don’t even look at the road,” he tells me.

But on mountains? There’s only one direction to go, and that’s the one gravity takes me to. 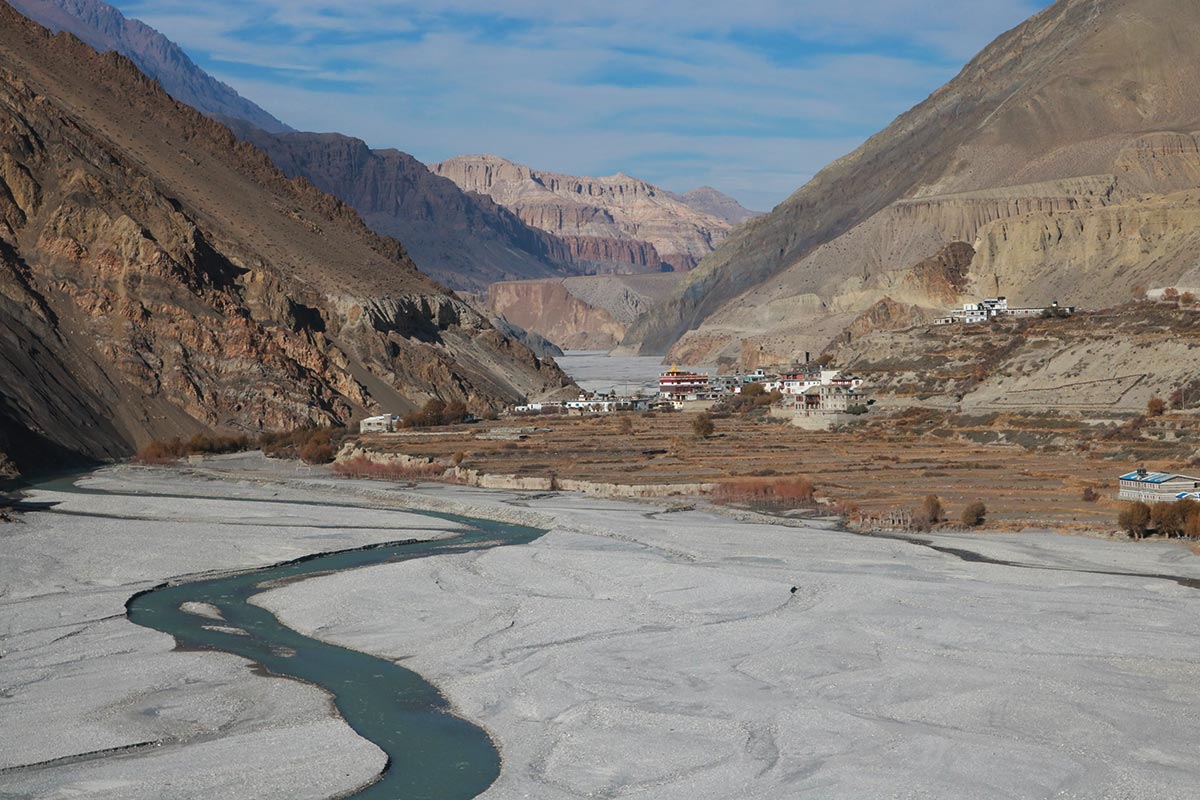 A village nestled between the mountains.

We slam forward on a downhill, and by we, I mean me into Renzi, and I feel his sharp inhale through his back as I desperately try to hold ground by making my butt and thighs tense, while rocks crackle and hiss under skidding tires and not one part of me is loose. My posture is in direct contrast with the serenity of the largest mountain chain in the world, the colour of bruises in various stages of healing.

Sitting on transportation of any kind in Nepal isn’t a reflexive, but rather a learned behaviour. Roads are characteristically challenging and the methods of carrying passengers resembles cattle cars. On particularly steep roads, where buses are banned, shared jeeps are the chosen form of transport and drivers will pack as many as five adults to a single row to maximize their profit.

The inability to move acts as an invisible seatbelt, and you learn to either lean forward or backwards, depending on the body attitude of your neighbour. Ideally, every other person should be leaning the opposite way to create space for things like arms.

In buses, particularly in congested Kathmandu, if you’re lucky enough to get a seat, it means you’ve consented to someone hoisting a toddler on your lap, and on an overnight bus once my friend’s assigned seat in the driver’s cabin was the cushion above the engine where she curled up like a cat and slept. In jeeps, if you sit in one of three prized front seats, you have a one in three chance of having the stick shift awkwardly poking between your legs, and your neck is probably crooked against the low ceiling.

Don’t ask how that starburst of cracks got itself onto the front window, obstructing the entire passenger-side view. Better you don’t know that, on the ride before this one, the man guarding the luggage on the roof tumbled off. Better you don’t hear the laugh of the driver as he tells the story, or see panic mirrored in the eyes of the translator who relays it to you. 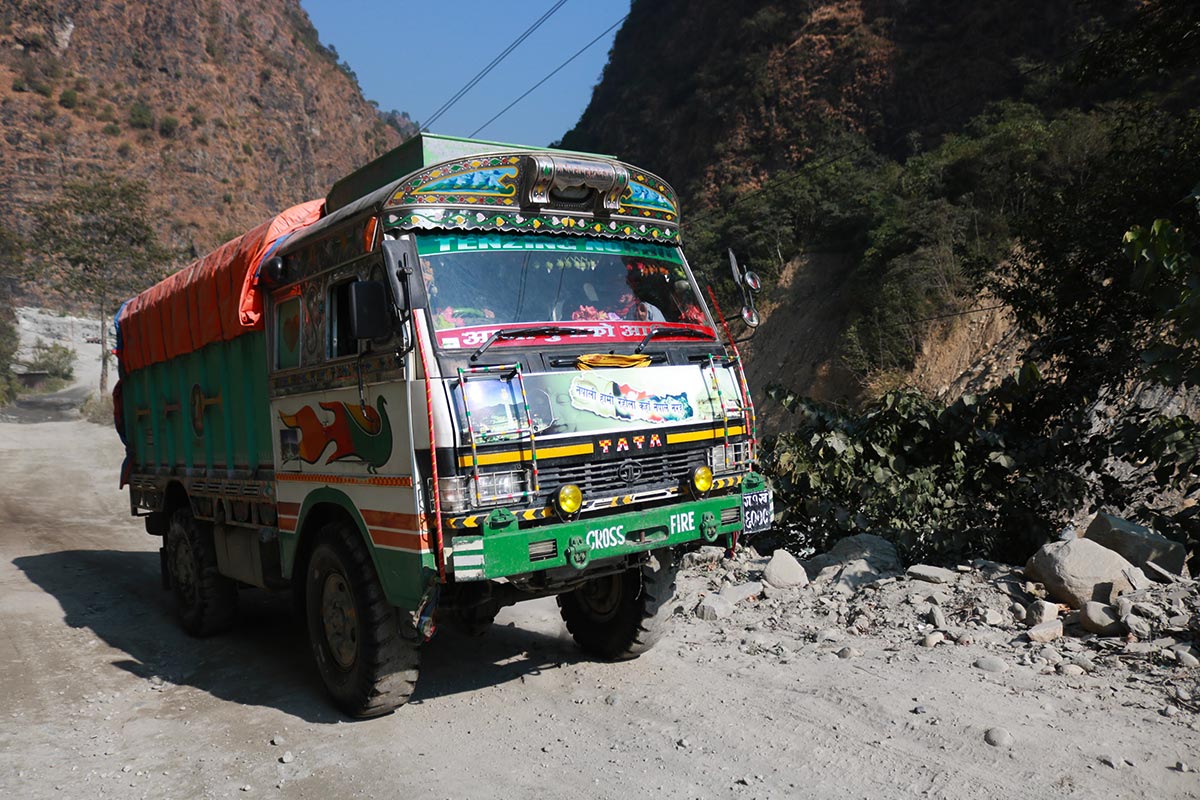 Riding a rural Nepali bus is not as easy as you might think, and all the adventure it looks like.

Every bit of “getting there” in Nepal requires physical adjustment and mental calm. To channel this, on the back of the motorbike I begin bellowing the Tibetan mantra om mani padme hum each time our wheels spin without propelling us forward.

We pass through towns, bits of windblown community that descended from Tibetan ancestors. Though there is a distinct fortitude about communities built on mountains, the sanctity of Tibetan culture is lost by a wave of tourist-minded businesspeople.

It seems the higher up we go, the more it should feel like tapping maple directly from a tree: pure and unblemished. In reality, it’s the opposite. These communities thrive on tourism, so when they see a tourist, it’s business as usual. 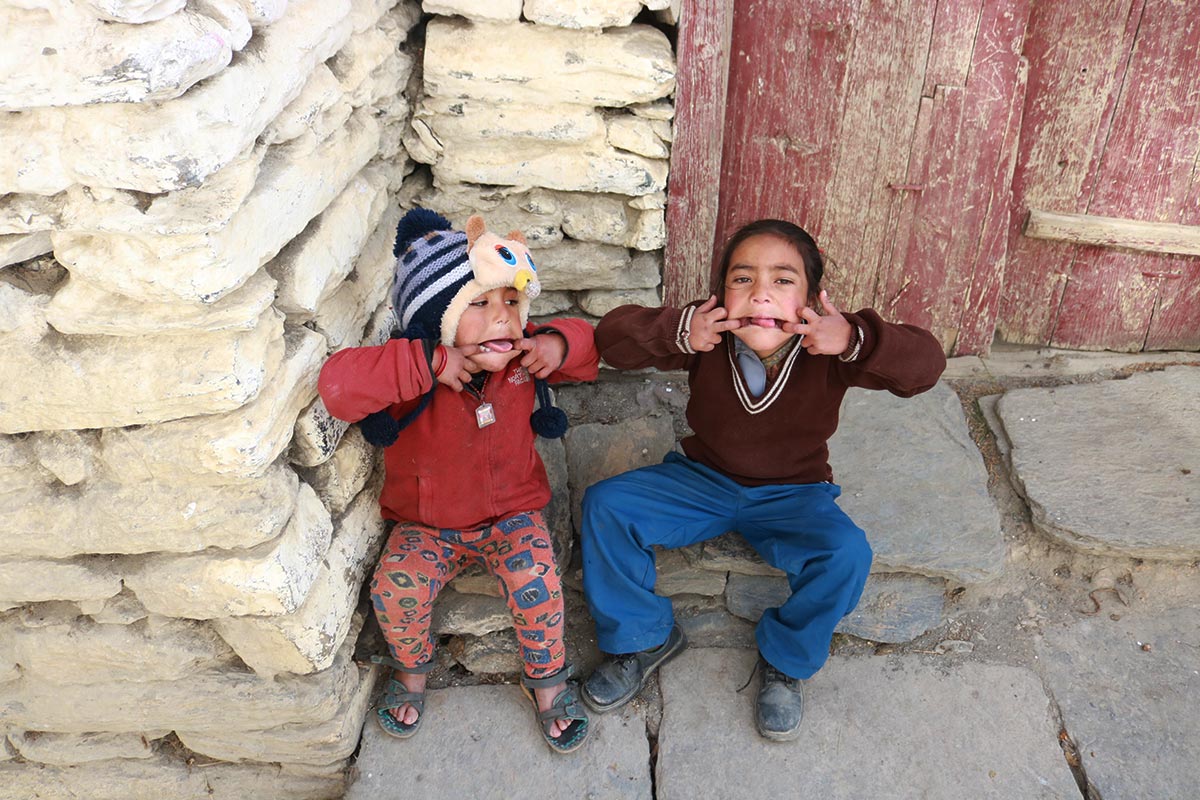 Nepali children, welcoming us to their community!

We stop in one blip of a town and buy petrol poured from re-purposed water bottles. Resources are priced first from the transport fee of hauling them here, then the up-hike from selling them to tourists.

Most places we go together, Nepali people assume Renzi is my guide. Seeing a Nepali and kuirini as friends doesn’t fall into the realm of possibility for shopkeepers and locals who only know Westerners for fleeting moments at a time. In Marpha, a particularly lovely town of white-brick buildings with a road tucked narrowly between, an older woman with a headscarf selling stone-embellished jewelry tries to double-team me with Renzi, who she doesn’t know is not on her team.

“Don’t ask her to go, keep her here,” she hisses at him in Nepali. “I’ll make her buy something.”

In the end, I do (by my own free will, thank you), while Renzi storms off after telling her we work together. 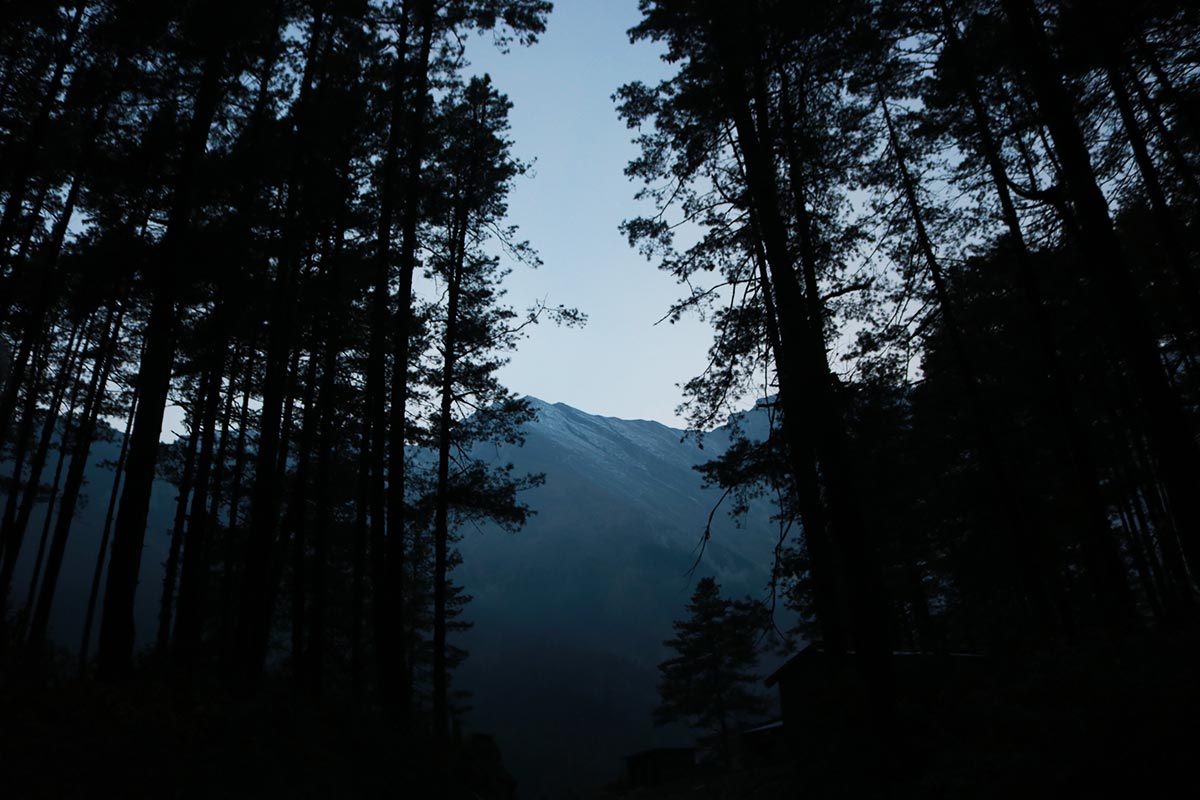 Blue hour in the Himalayas.

In between the few towns, there is nothing to moor us to civilization. We are pioneers following only verbal directions from the previous townspeople. When the roads diverge, Renzi pulls up his helmet and yells to anyone even remotely nearby: “Auntie!” His voice echoes. “Muktinath?” With the upward thrust of a hand like a crossing guard, we are given our direction.

We learn, after the first two days of wet socks that take roasting over a fire like marshmallows to dry, to pre-plan crossing rivers. Instead of barrelling blindly forward, we stop, evaluate the depth and rocks that could stall the wheels and tip us (again). Falling is prefaced by the most awful sound of sputtering wheels and Renzi’s teetering frame: two indications that I learn mean timber!

This time, it was into a foot of melting glacial stream water, as cold as it sounds. Our duffel bag bungees behind me (carrying, among other possessions, my laptop); despite getting half-submerged, no damage is done.

In our revised style, crossing rivers means Renzi chancing forward alone with more confidence and less weight, and me, barefoot, searching for the shallowest path to cross, shrieking when the water hits my shins.

It gets colder as we draw closer to Muktinath temple, a renowned holy pilgrimage site for both Buddhists and Hindus. My face grows sunburned from long days and Renzi’s hands begin to ache from pulling the brake on our shaky climb. There is a wobbliness in his arms, which he holds almost constantly at rigid, 90-degree angles that stay with him the whole ride, worse when the road conditions try—and sometimes succeed—to push us over. 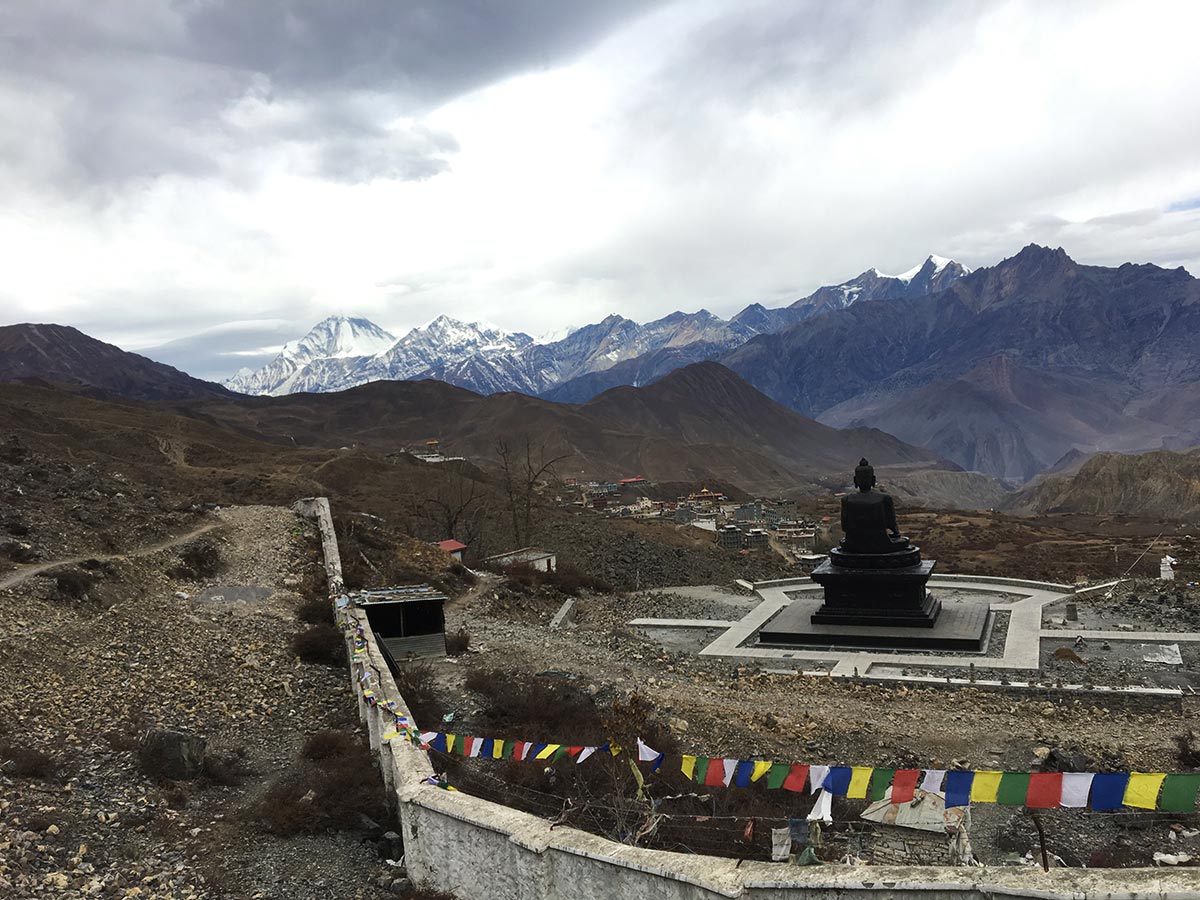 From Muktinath, we are in a crater surrounded by the Himalayas, cadaverous ups and downs of mountainsides in the exaggerated way children draw them. The colours are of muted earth tones that erupt into the most spectacular sundown, silhouetting the Himalayas in technicolor.

Renzi, who’s spent his entire 28 years in Nepal, keeps gaping at the open landscape, saying, “I can’t believe this is my country. I can’t believe I live here.”

And I can’t believe I do.

On top of the final mountain, I look back at the way we’ve come and can’t believe how far we’ve travelled. From where we stand, dwarfed on a hill with a herding shepherd, you can’t even make out the shaky line of “road” we followed to get here.

How, further still, I am from modern conveniences I fled to Nepal to escape. How far we are from even basic necessities. No trash cans. No bathrooms. No roads.