The lush forests and scalable mountains of East Africa offer some of the best one-day adventures, and they just might include a gorilla sighting or two!

Story and Photos by Alicia Erikson

Terraced farmland and scenes of young Rwandese teens pushing bikes overloaded with plantains flashed in and out of visibility. Scenes painted in a brilliant spectrum of greens sped by and a light chill punctured the air as the bus climbed into the hills of Rwanda’s Northern Province.

Gearing up for one of my final weekends in Rwanda, I decided to return to my favourite region: the lush Northern Province—filled to the brim with wildlife treks, volcanic peaks waiting to be scaled, and azure lakes cutting through the emerald hills. One of the few activities left to do on my Rwanda bucket list: hike to the top of Mount Bisoke, one of the many volcanic peaks in the Virunga Mountain range that extends along the borders of Rwanda, Uganda and the Democratic Republic of the Congo (DRC).

At a reasonable cost for the permit, doable in a day, and offering a crater lake at the top, Bisoke—looming at 3,711 metres—seemed the perfect adventure with which to bid farewell to Rwanda. “The hike is a relatively mild few hours that becomes a bit more challenging as you near the summit,” was the advice we had heard. 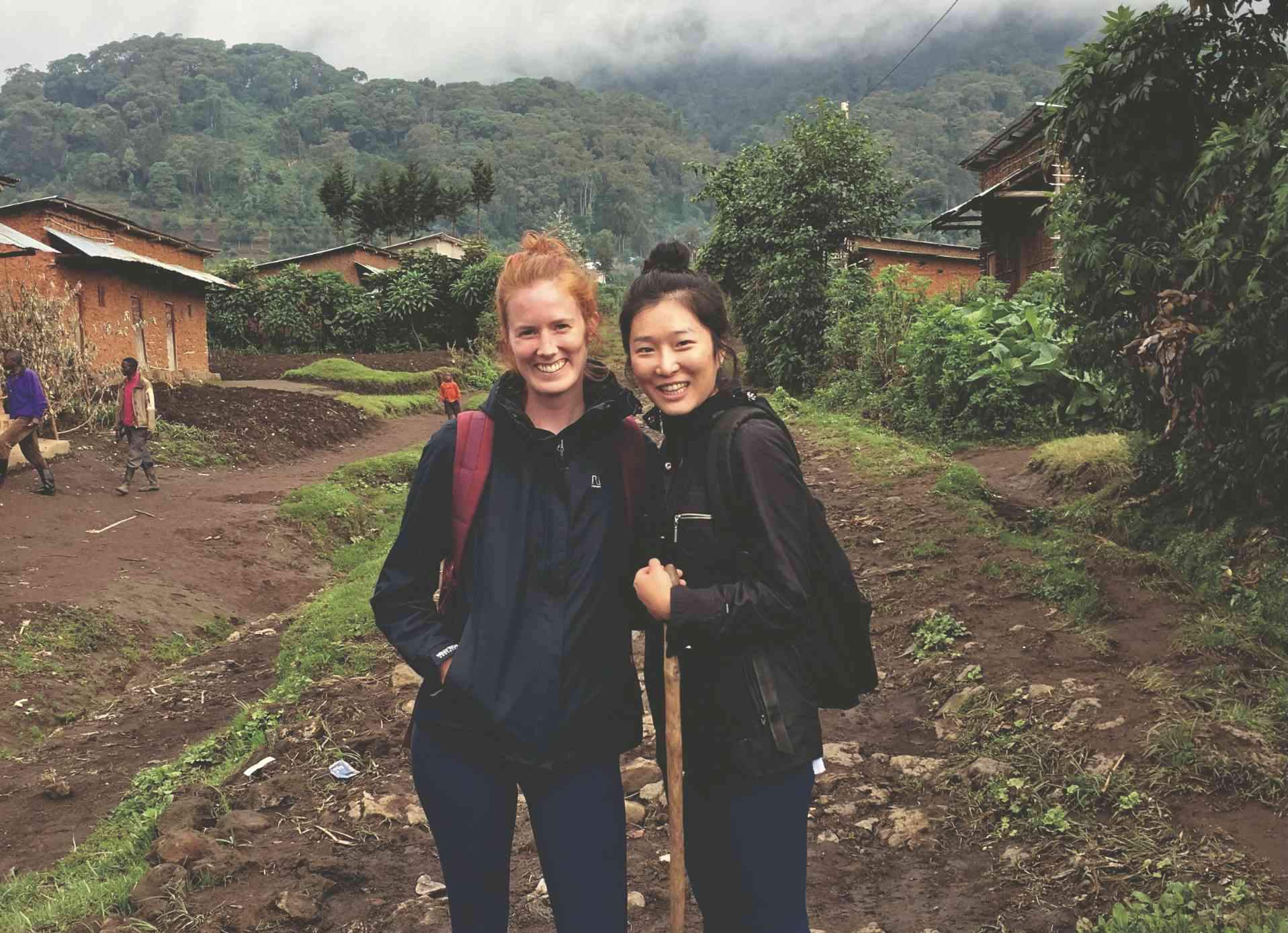 The author and her friend Jenny, at the start of their trek to summit Rwanda’s Mount Bisoke.

A few hours? A relatively short distance? No problem. As an avid hiker who embarked on regular adventures in the mountains of the western United States, who had already conquered Mount Nyiragongo in the DRC and Rwenzori Mountains in Uganda, this sounded like a casual feat to accomplish. Stuffing a water bottle, a light lunch and my camera in my daypack, we set off to Volcanoes National Park to check in for the hike. 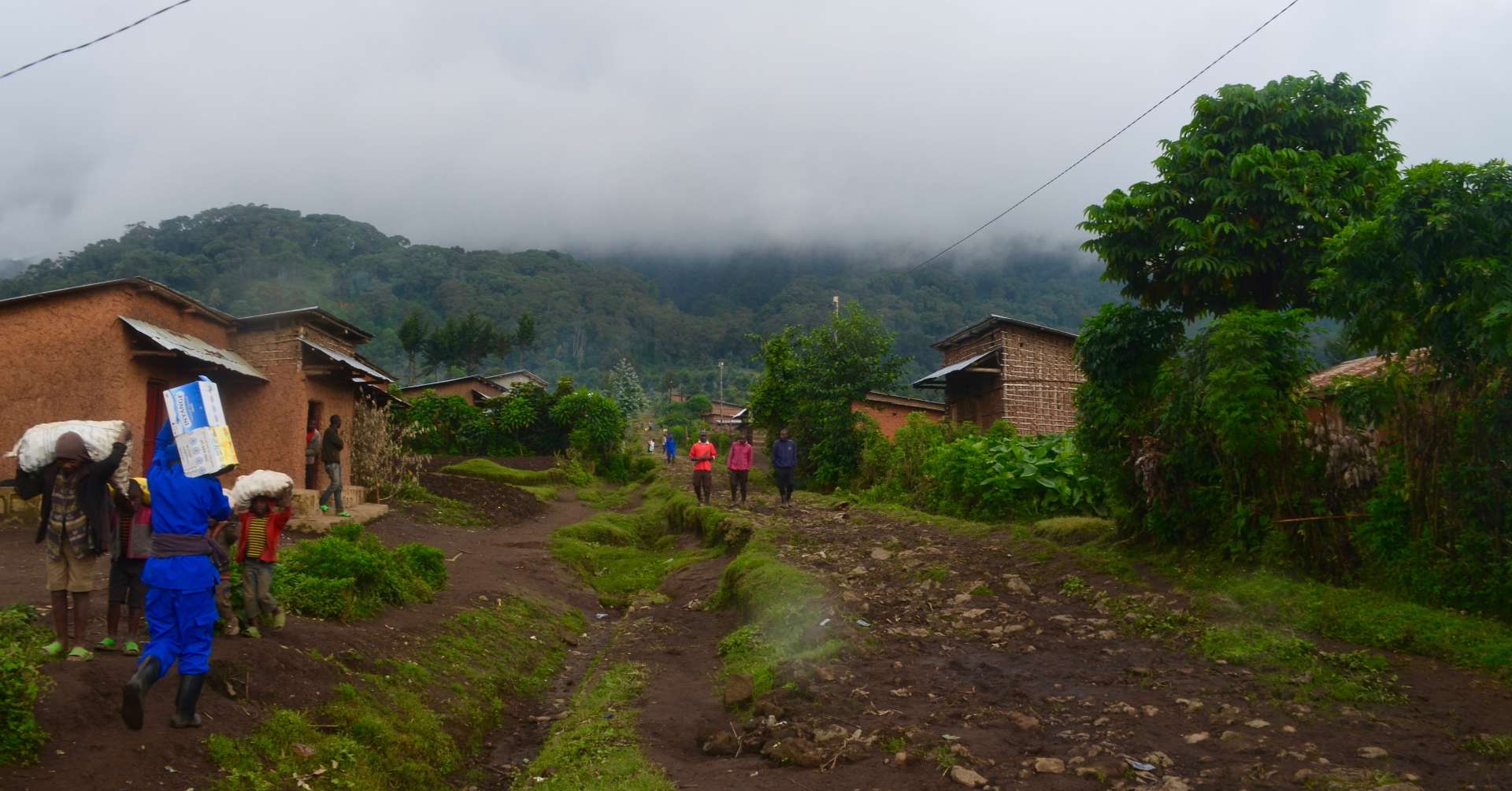 The verdant lushness of East Africa: a Rwandan village near the trek’s trailhead.

To get to the trailhead, one can choose to self-drive or hire a driver, but it’s essential to have a 4×4 vehicle that can handle the deeply potholed roads along route. Permits must be booked in advance, and can be done so directly on the Rwandan Development Board’s website.

Be sure to bring a copy of the permit and all requested documents with you (including a copy of your passport), as check-in is required at the park’s headquarters upon arrival. 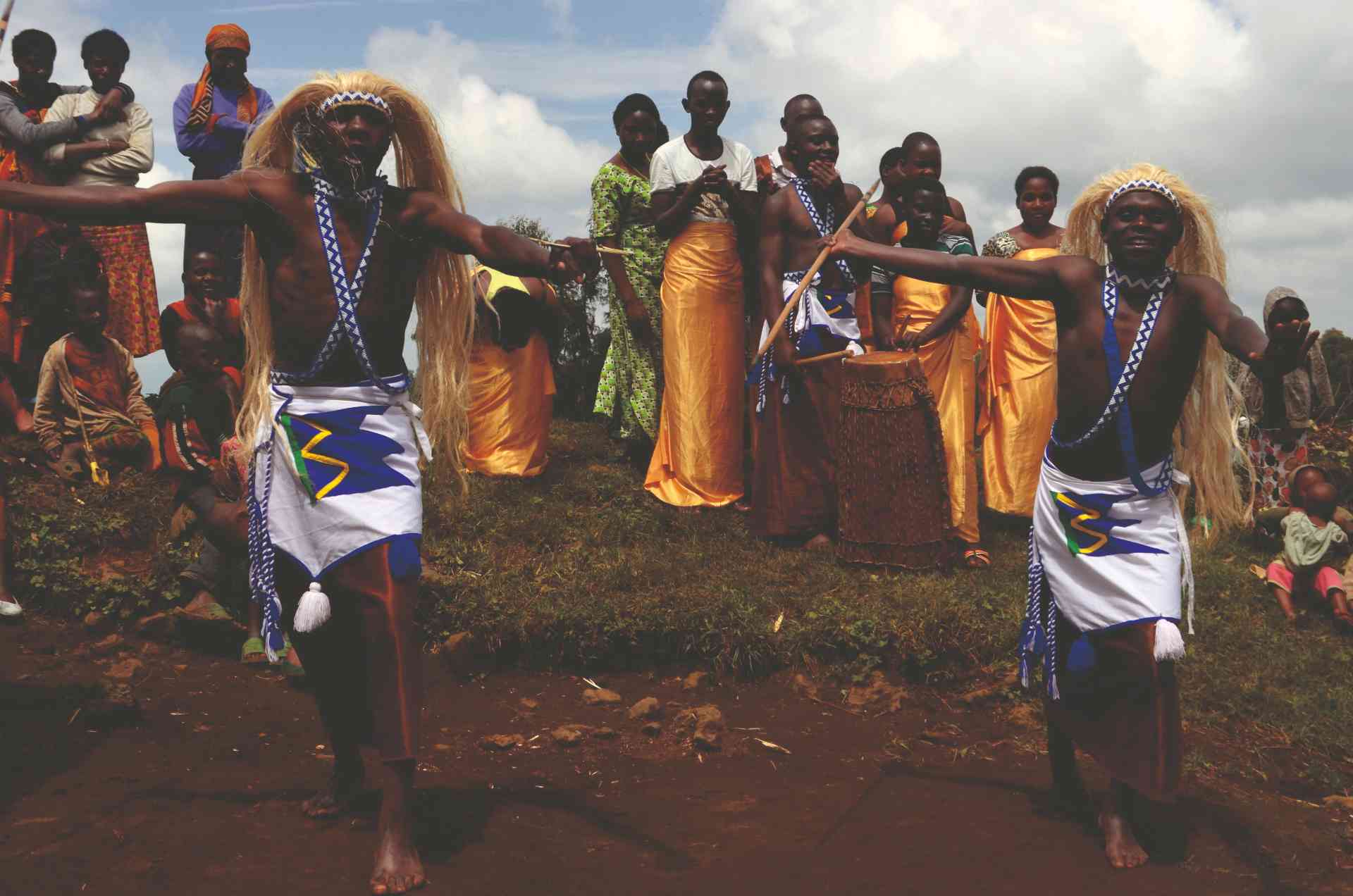 Dancing in the village near Sabinyo Lodge, Rwanda.

We sleepily waited around the headquarters at Kinigi for our trek to begin, relishing in the sun in the midst of the rainy season, and hoping the past few days of dry skies and sunshine had dried out the paths from the past month of torrential downpour. Rainy season in Rwanda begins late March, peaking in the month of April, and tapers off by late May.

However, the forests are still damp and muddy throughout May and early June, waiting for the sun of the dry season to evaporate the water. Peak dry season lasts from June to August, with intermittent rains coming again around November. While not impossible, embarking on treks through the parks during rainy season can absolutely prove challenging. 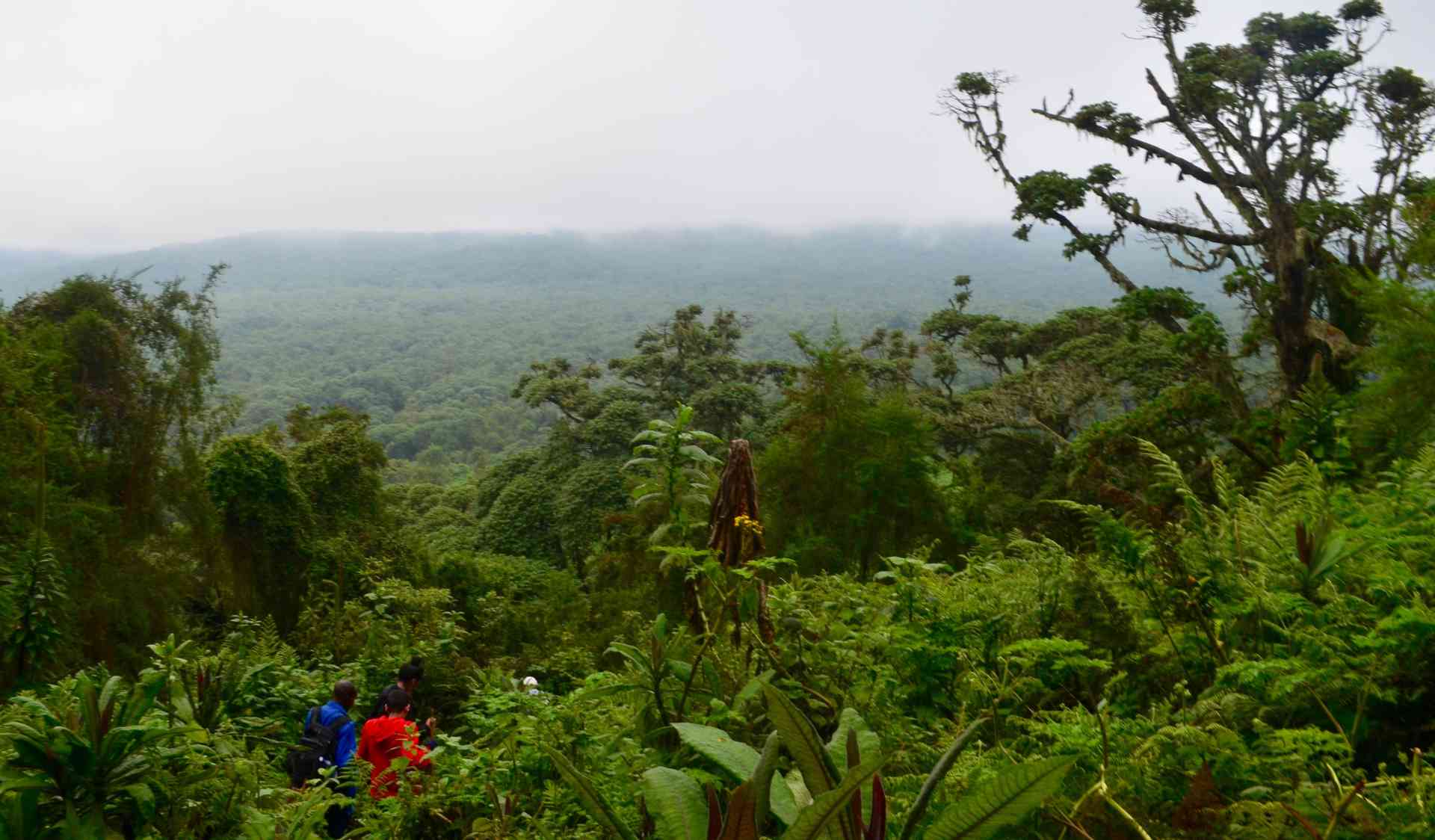 Views during the hike of Volcanoes National Park.

Our group finally met with our guide and armed rangers around 8 a.m., preparing to embark on our volcanic excursion. Porters are available for hire to carry your daypack and assist with any challenging sections of the climb. 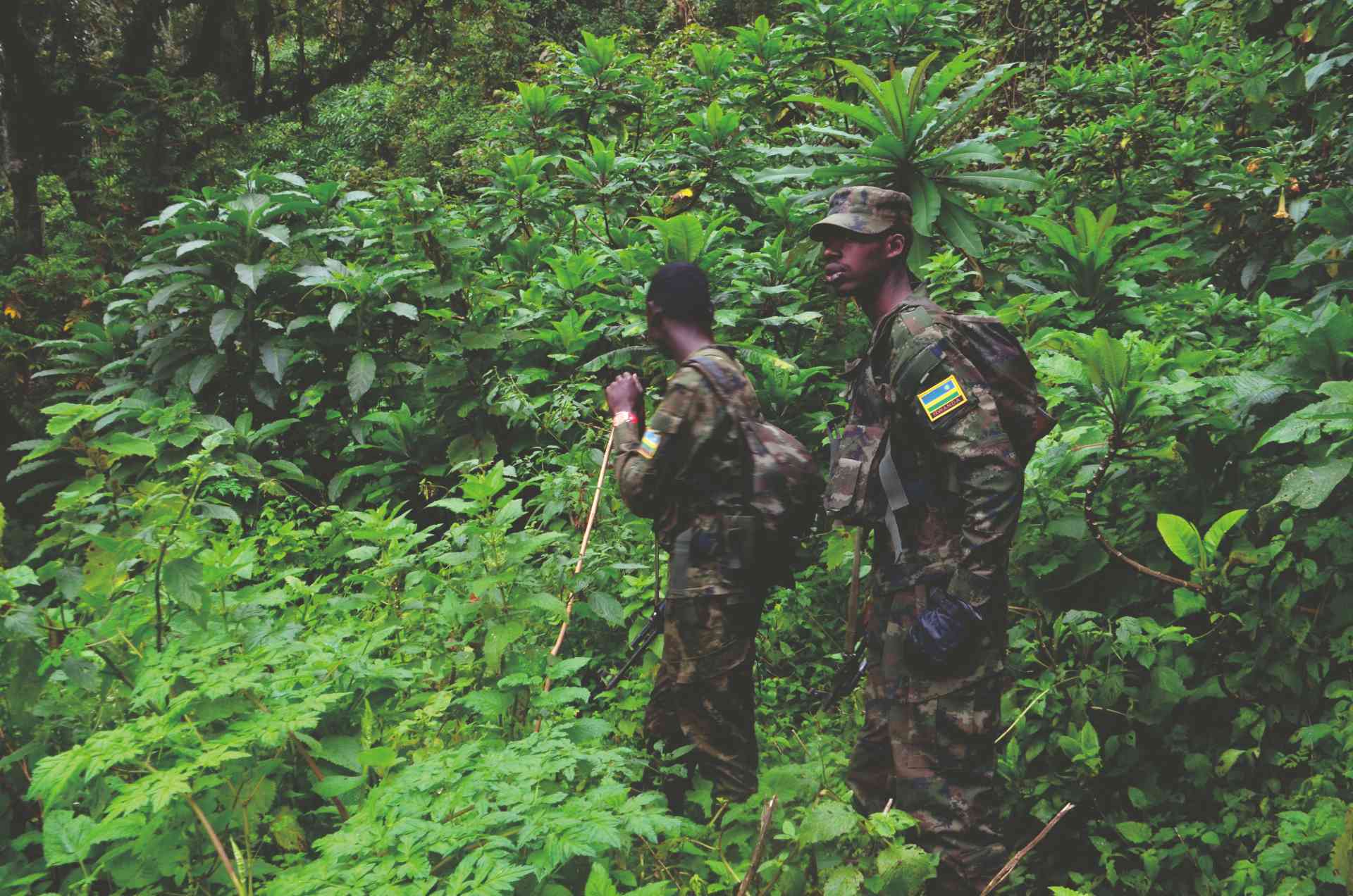 The Rangers who guide tourists through the forest and mountains, but also guard the gorillas of Rwanda, are legendary.

The group tends to break into two sections of a faster and of a slower group, each with sufficient number of guards, who are there to protect us from potential wildlife encounters—the most exciting being the mountain gorilla, which is not an uncommon occurrence. To my dismay, the gorilla family known in the area was living further into the forest when we hiked so we did not have any primate crossings.

To say we were unprepared would be a massive understatement. At least I had finally invested in a durable pair of hiking boots. After destroying my running shoes in the depths of the Rwenzoris and Bwindi (a national park in Uganda), I vowed to never wear anything but sturdy footwear again on hikes through African jungle and volcanic terrain. That was about the extent of my preparedness for the trek, though, which took much(!) longer than the anticipated few hours, meaning our light lunch and water were insufficient for the length and difficulty of the hike. 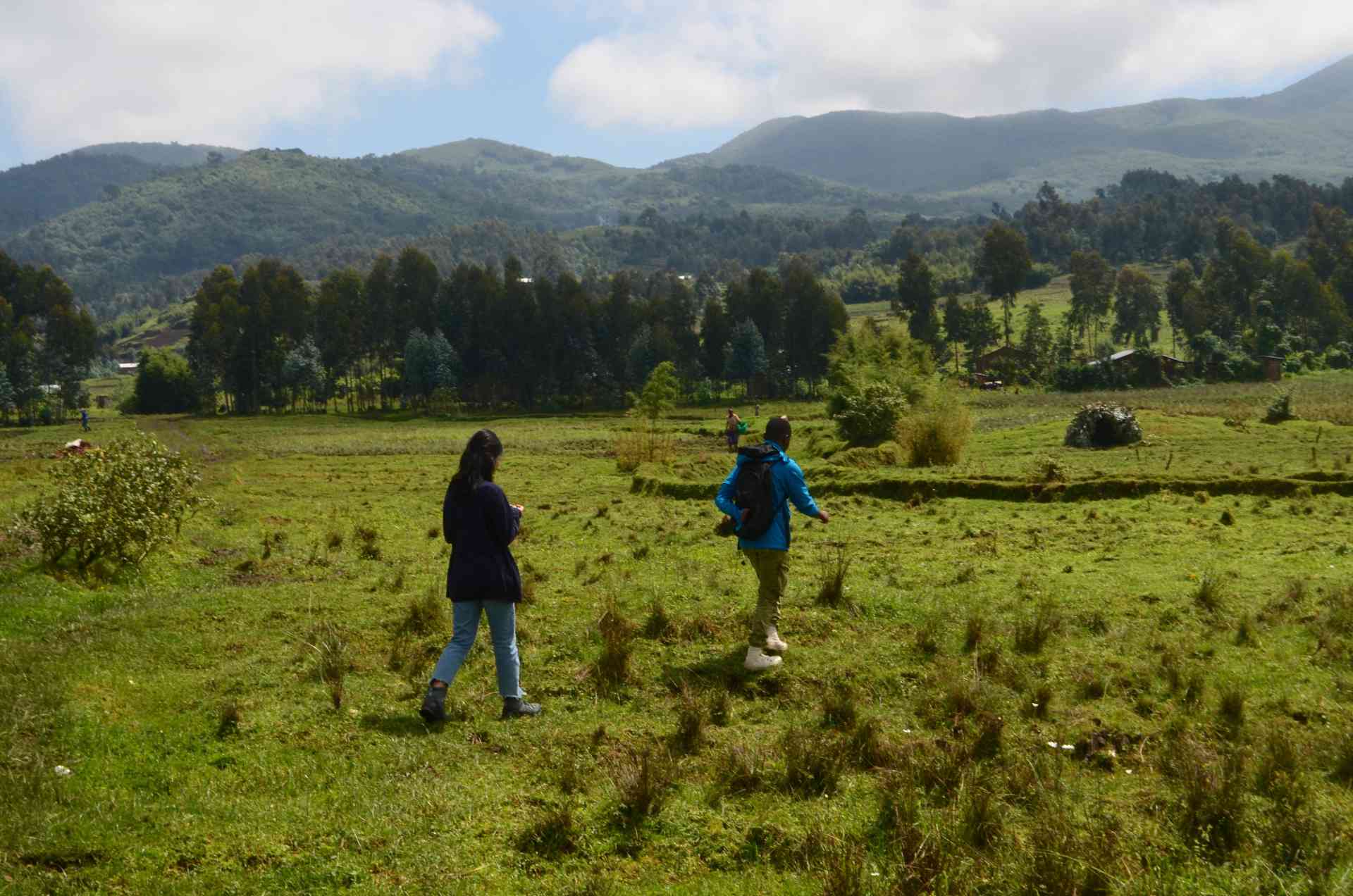 The first half of the hike is considered to be easy, offering a relatively flat trek through densely forested terrain. One is enveloped by lush green flora, frequently having to duck beneath low-hanging branches and privy to the rhythmic stirrings of the jungle.

The few days of sun had done little to dry up the forest floor however, leaving us to trek through deep mud for the majority of the time. My boots, well christened on their first hike, sank about a foot deep into thick mud at almost every step. This made for a slow and tedious trudge for the first couple of hours. 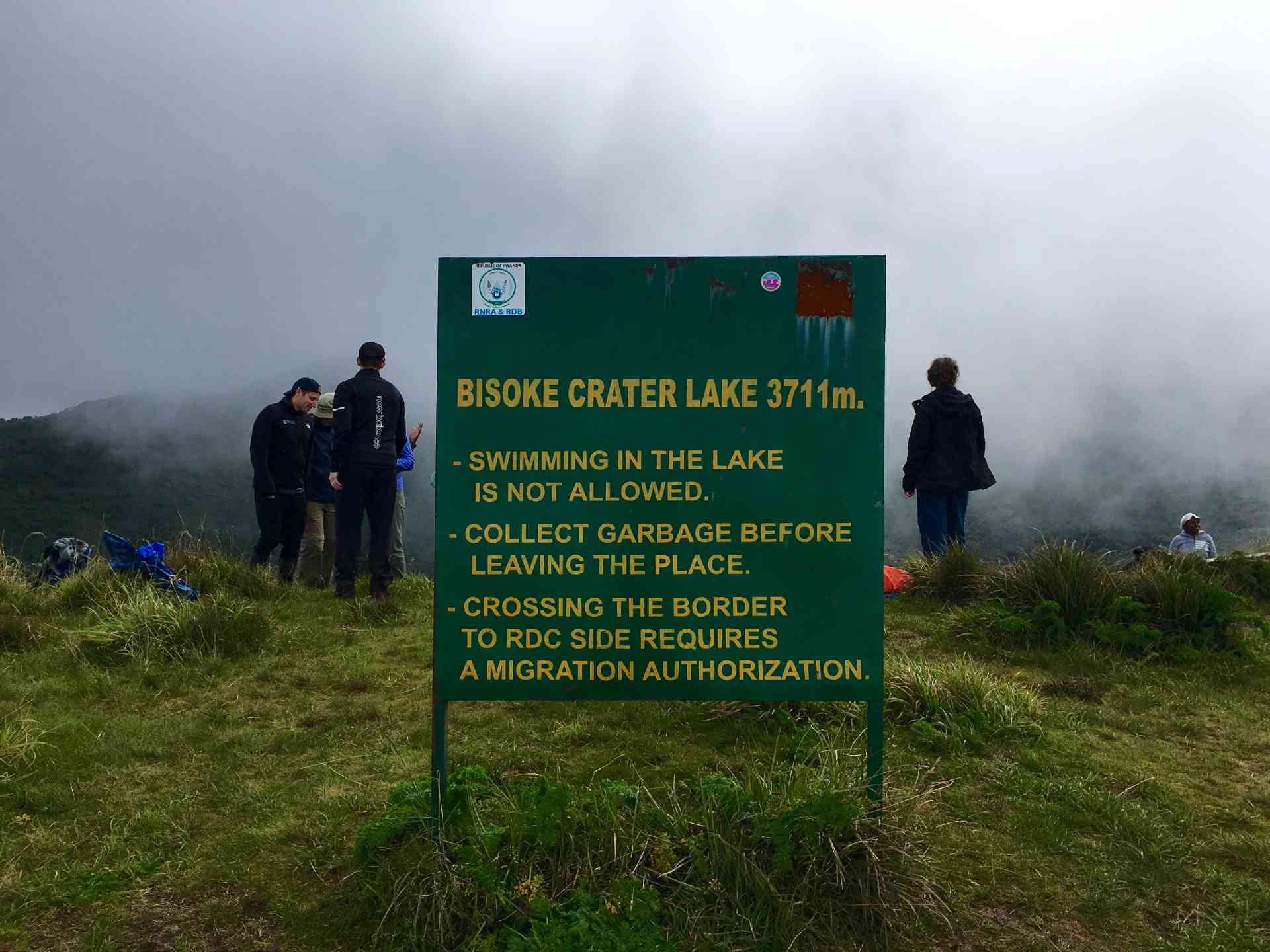 The summit of Mount Bisoke. 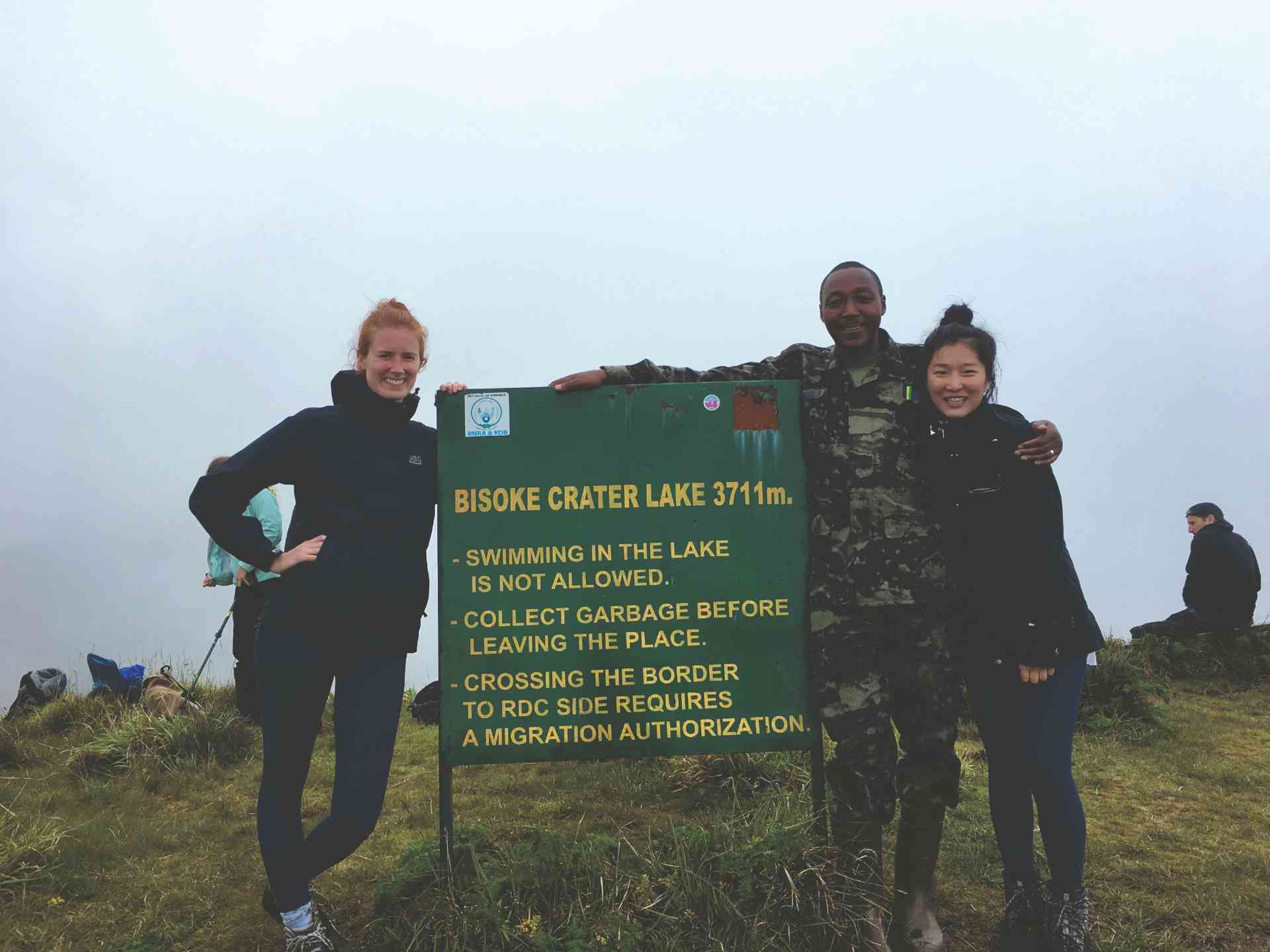 The author, Jenny (far right) and their local guide/porter. 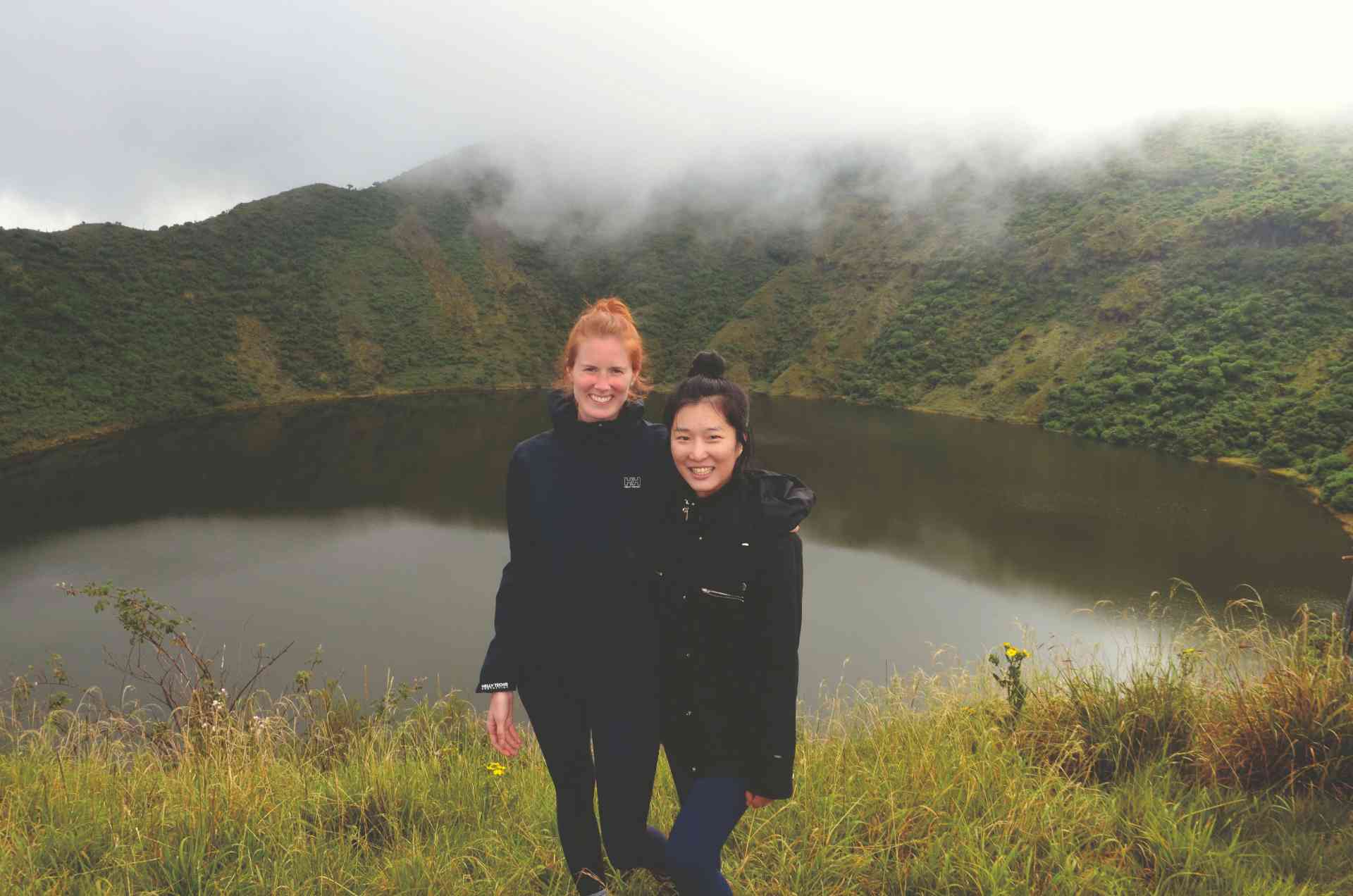 Near the crater at the top of Mount Bisoke.

The ascent began gradually, and quickly turned into a steep scramble the rest of the way to the top. Each step required a huge lunge up precarious, muddy escarpment to the next pseudo-step, constructed by a root or boulder. This pattern of stepping and surging upwards lasted for a few hours, with my trusty porter frequently calling out “Aisha, you OK?” As we neared the summit, with the air becoming tangibly thinner, each step required full exertion of energy.

Arguably, my favourite part of a hike is reaching the top, the challenge of the uphill climb behind me and the reward of sweeping views awaiting my arrival. Collapsing at the rim of the crater, we marvelled at the densely blue lake below. A sharp chill punctured the air as a thick veil of fog moved back and forth across the lake. Perched atop a volcano overlooking dense rainforest, we unwrapped our rolexes (a local specialty of egg and vegetables wrapped in a chapatti) and drank in the expanse of the views surrounding us.

Eventually the reality that we were only halfway done with the trek set in, and we set off into the jungle once more to brave the slippery slopes, returning to the base of the volcano. Almost more challenging than the ascent, descending required careful calculation of each step so as not to tumble the way down. The already steep and precarious path became that much more hazardous in the rainy season, the path slick with mud sliding out from beneath even the sturdiest of boots.

Our trek finished via a different path than it began, bringing us through green fields, the views of the park headquarters drawing nearer with each step. Thirsty, sore and exhausted, we scrambled into our trusty 4×4, and set off for the luxurious Sabinyo Silverback Lodge, bouncing once again along the deeply potholed road.

A hot shower was eagerly welcomed as we arrived at Sabinyo. Venturing into the plush living room adorned with treasures reminiscent of travels across the African continent, we awaited dinner with a glass of wine in front of the fireplace, learning of the fascinating community-development model the lodge is run by. Sleep came easy that night after indulging in a delectable three-course dinner and a few more glasses of wine, with one more Rwandan adventure accomplished, and the challenge of the morning’s ascent but a fading memory. ♦

When not in Rwanda, can be found wandering the planet and through other parts of East Africa from her hometown of Seattle, Washington. Check her out on Instagram @alicia_erickson