As a long-term expat living in Malta, I’m often asked about the top must-see things in my country of residence. In my five years in Malta I’ve visited all the major sites, and most of the minor ones too. If you’re coming down to the island—and especially if it’s your first visit—I strongly suggest adding these things to your list.

As a long term expat living in Malta, I’m often asked about the top must see things in my country of residence. In my 5 years in Malta I’ve visited all the major sites, and most of the minor ones too. If you’re coming down to the island—and especially if it’s your first visit—I strongly suggest adding these things to your list.

If you’re only stopping in Malta for 2 days, spend 1 of them in Valletta. If you’re here for a week, spend at least 2 days exploring the island’s compact, peninsular capital “city”. It’s crammed into an area 600m by 1000m, and it is entirely walkable.

Whether I’m taking it in from the heights of the Upper Barrakka Garden or the tree-shaded peace of the Lower Barrakka, I never get tired of that Grand Harbour view. I was on the fence about staying in Malta until I saw Valletta, but one look at the harbour convinced me I should live here. It really is that impressive.

There are so many small streets and hidden corners to discover. You could spend most of your time just wandering around, like I do. But don’t miss the Grandmaster’s Palace, the gilded splendour of St. John’s Co-Cathedral, Fort St. Elmo, and a walk down Republic Street.

Catch a show at the Manoel Theatre if you can. Take a walk through Hastings Garden to admire the view. And see if there’s an exhibit on at the St. James Cavalier Centre for Creativity—it’s free. 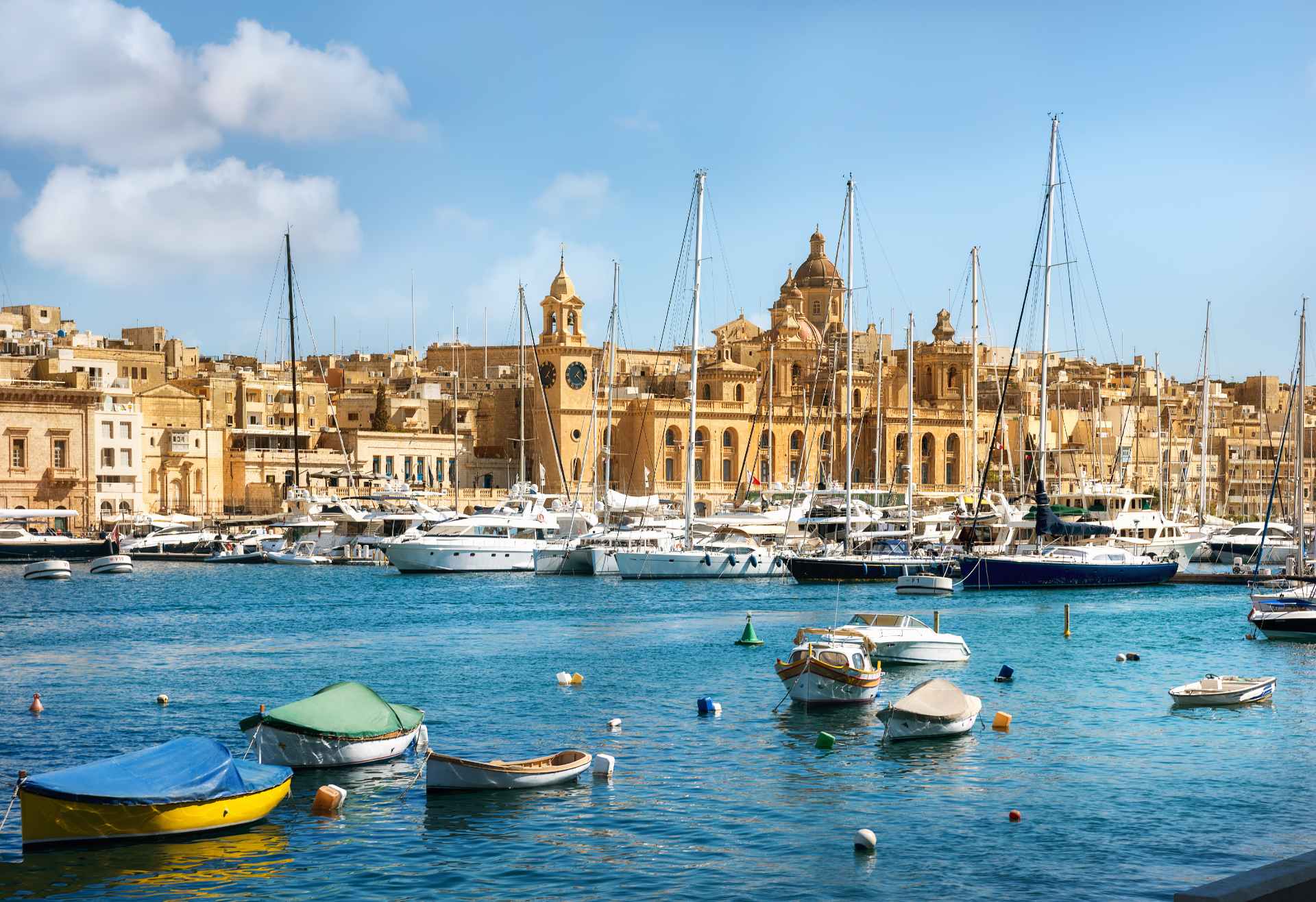 And if you have extra time, take a harbour tour on one of the many boats that depart from Sliema Ferries. I’d normally consider it a tacky tourist thing to do, but in this case it really is worth it. I go along anytime friends come to visit, because I love to see those massive bastions and fortifications from water level, and to imagine just how frightening they must have looked to the invading Turks.

Valletta is the highlight, in my opinion. But there’s a lot more to explore in other parts of the island.

The Hypogeum is truly incredible, and probably the most unique prehistoric site I’ve ever seen. This underground necropolis was only discovered in 1902, when someone accidentally cut into it while digging a cistern below their house.

Carved from the rock with simple bone and stone tools ca. 3600 to 3000 BC, it is believed to have contained an estimated 7,000 bodies. But the bones have been removed, and you can explore its 500 square meters of halls, chambers and passageways with a tour. Book well in advance. This is a fragile site, and visitors are strictly limited. It often sells out completely in the summer high season.

While you’re in the neighbourhood, you’ll also want to pop by Tarxien Temple. It’s only a few blocks away. This one is entirely surrounded by a rather ugly built up residential area, so it lacks some of the atmosphere of the sites I’ll describe below. But its megalithic structures date from between 3600 and 2500 BC, and they include four linked temple enclosures. You won’t see anything like it anywhere else in the world.

Yeah, okay, this is another prehistoric temple site. But you’ll want to see it for the setting alone.

The site consists of two megalithic temples—Hagar Qim and Mnajdra—that date from between 3600 and 3000 BC.

The megalithic sites on Malta and Gozo were the result of several phases of construction and evolution in the early Stone Age. But the temple building culture vanished after 2500 BC, and no one knows where they went or what happened to them.

Now, keep in mind that construction of Stonehenge didn’t even start until 2600 BC. That makes the temples in Malta some of the oldest freestanding structures on Earth. They even predate the pyramids of Egypt by more than 500 years.

The two temples at Hagar Qim sit high on a cliff at the edge of the island, overlooking the deep blue Mediterranean Sea, and the tiny island of Filfla in the distance. And beyond that, North Africa somewhere over the hazy horizon.

It’s one of the most dramatic photo opportunities you’ll find here—and indeed, anywhere in the Mediterranean. Sure, it takes some effort to reach that part of the island by bus. But you’ll thank me when you see it.

Okay, let’s get back to more recent history…

You’ll definitely want to spend an hour walking around the old capital of Mdina. The site was first fortified by the Phoenicians around 1000 BC. It was built on by the Romans, and walled by the Arabs in the 9th century.

Mdina served as Malta’s capital from that time, until the Knights of St. John took possession of the islands in 1530 and moved their base over to the Grand Harbour.

Mdina is often called the Silent City, but you’re only likely to feel that way late at night when the tourist crowds have left. But hey, they go there for a reason, and those narrow streets and alleys ooze almost as much atmosphere as the city does when seen from below.

When you’ve finished walking around, take a coffee at Fontanella Tea Gardens, and sip it while admiring views over half the island.

But you aren’t done with this area just yet…

Make your way back out of Mdina’s main gate and walk across the road to the town of Rabat. Stop by a little shop called Crystal Palace, near the ruins of the Roman Villa. You’ll see it next to the car park on Triq San Pawl. Don’t let the run down appearance scare you off. This place makes the best pastizzi on the island. That greasy little bundle of ricotta or mushy pea goodness is Malta’s main snack.

Make your way through the old sections of Rabat, and go towards St. Paul’s Church on the main square.

In the streets just beyond it, you’ll find the entrances to a number of pre-Christian and Christian catacombs dating to the 3rd century AD. It’s a massive labyrinth of rock cut burial niches that runs beneath large areas of the town. Take a torch, and be sure to make zombie noises while you’re down there.

Okay, back to the Grand Harbour, which really does form the centre of all your explorations.

If you loved Valletta, then you’ll want to go across to the Three Cities for a deeper look into the time of the Knights of Malta. This is where the events of the Great Siege of 1565 played out. And the current Grandmaster of the Knights lives there too, in the upper areas of Fort St. Angelo.

There’s a nice little park at the far end of Senglea with great views across to Valletta. And Birgu is home to some impressive fortifications, stately Auberges from the time of the Knights, the Inquisitor’s Palace, and a yacht harbour that’s perfect for a stroll and a cold beer.

Up for a Swim?

You can’t visit the Mediterranean without dipping your toes into the sea.

There are a couple sandy beaches in the touristy parts of the island, but they’re usually pretty crowded, and they aren’t much to compare with beaches in Spain or Portugal. What you’ll want to look for instead is a proper rocky cove, the kind of place where the locals hang out.

My favourite swimming spot is the Delimara peninsula, at the far southeast of the island. St. Peter’s Pool is now firmly on the tourist radar, and you can go there to leap off the cliffs if you like. But I swim a bit farther up, at Kalanka Bay, just below the lighthouse.

There are much more famous spots, of course. A lot of folks take a boat trip to the tiny uninhabited island of Comino to swim at the famous “Blue Lagoon”. But check the reviews on TripAdvisor before you book that one. Those boats are incredibly crowded and loud, and you don’t always get what you think you’ve paid for.

The Blue Lagoon can be incredibly overcrowded too. When we went, we had to cling to the rocks, sitting on hard stone and climbing down a sheer rock face just to get get to the sea. I”m glad I saw it once, but we will never go back. Give me the peace and quiet of Delimara any day.

Drive to Marsascala for Maltese Food

If you spent the day swimming, then you’ve probably worked up a proper appetite.

Everyone talks about going for fish dinners in the pretty harbour town of Marsaxlokk. That makes for a nice night out, and there are some very good restaurants alongside the harbour. I like Tartarun.

But Marsaxlokk can be pricey, and busy in the tourist season. If you’re looking for a much more local experience, drive a little farther to the village of Marsascala. That’s where the Maltese vacationers spend their summer. There isn’t a whole lot to see here for the visitor, but it’s the perfect place to feast on Maltese food. Try Tal-Familja for homemade taste and massive portions. It’s a local favourite.

Got Time for Gozo?

You are a tourist machine. I’m lucky to accomplish a single thing in one day.

If you’re up for more exploring, then I recommend you reward your diligence with a trip to Malta’s second-largest island: peaceful rural Gozo.

Gozo is quieter than the main island, and life goes on at a slower pace. It’ll give you a sense of what all these islands must have been like without so many people and cars and houses.

Skip Sliema if you’re not into overcrowded, overbuilt and rather characterless urban coastal sprawl. And skip the so-called “nightlife district” of Paceville if you’re not into underage binge drinking, crowds, and vomit-covered streets. The island has so much more to offer than those places.

I hope this list gives you somewhere to start.