What’s the old saying? Sometimes it’s about the destination, not the journey…?

It has long been said that getting there is half the fun, and apart from lost luggage, cancelled flights and labour disruption, I have always subscribed to that thought. Why take one direct flight when three flights, six airports, two buses, one taxi and a train can do the job; at least that’s how I rationalized the rather circuitous route I once endured on the way to Rhodes, Greece.

As someone who has voluntarily travelled to The Valley of the Kings in Egypt by a donkey bent on veering into oncoming traffic; to Victoria Falls by a horse determined to swim the swirling maelstrom of the Zambezi River above the approximate 108-metre falls; and to Mount Sinai by a regurgitating, expectorating, suppurating and flatulent camel, when more comfortable modes of transport were available, faster and in some cases less expensive, I have clearly adhered to the old adage of the journey being as good as the destination.

The great temples of Abu Simbel lie 280 kilometres south of the city of Aswan on the shores of Lake Nasser, and are among Egypt’s most spectacular sights. To get there requires a drive of four hours through the pre-dawn darkness of the Sahara, through lunar landscapes and small villages road-blocked by carbine-toting, djellaba-sporting local police. The coaches and minibuses gather in a police-cordoned Aswan side street at 4 a.m., before heading off into the wilderness by convoy with an armoured car at the front and a pickup full of heavily armed police at the rear. All of this appealed to my sense of adventure almost as much as exploring the temples themselves, and I eagerly looked forward to my Nubian odyssey.

Before leaving home I contacted a friend who had travelled through Egypt a year earlier. I asked him for any must-sees, packing tips or advice on things to avoid. I’ve loved guidebooks since long before they migrated to the Internet, but my best advice has often come from friends and acquaintances.

“Back in the sunlight, all but the shoreline of Lake Nasser below was obscured by a heavy haze. We gazed in awe at the enormous 20-metre high carved statues of Rameses II that towered overhead, and took swigs of water from our bottles, now as hot as tea.”

This was unlike Spencer. He and his wife have hiked and backpacked the world using jobs as fundraising between travels. Although certainly not averse to a night or two in five-star luxury, Spencer’s real love comes in quaffing boiled eggs from a tin bucket in third-class carriages on Indian trains.

“Really? I was looking forward to the bus,” I answered. “You know: seeing a bit more of the country; getting off the beaten track.”

Spencer explained that as all of the buses and minivans travel together, several hundred to even a few thousand people arrive at Abu Simbel at exactly the same time each day. They paw over the sight for a couple of hours, before returning to their vehicles and heading back to Aswan all together in convoy once more.

“If you fly,” he added, “you arrive just as everyone’s leaving, and you have the place practically to yourself.”

Although somewhat disappointed to be giving up my overland trek, I did see the sense in his suggestion and booked a return flight to the sight.

At 3:30 a.m., we heard the bus depart from our backstreet tourist hotel to head for the convoy rendezvous…then rolled over to sleep for an extra couple of hours.

Aswan airport is located just outside town, and as we discovered from the fighter jets in fortified subterranean bunkers, also serves as an Egyptian air force base to protect the strategic Aswan High Dam.

As we winged our way south bouncing on rising thermals over endless sands, swirling dust and dancing heat shimmers, we enjoyed a light breakfast before the captain announced that we were on final approach. One wing dipped, and beneath us we glimpsed steamy Lake Nasser and what looked like a thousand black ants but were actually people crawling over Abu Simbel’s magnificent structures.

On landing we boarded a minivan that shuttled us the short distance to the great archaeological site. Outside were gathered dozens of coaches ready to drive back north to Aswan. Although still early morning, the heat was already oppressive and the proximity of the lake gave the air a taxing, heavy, humid feel. We entered the grounds just as the multitude of sleep-deprived, heat-lagged visitors began streaming to their buses for the return trip.

One of my favourite artists has always been the 19th century Scottish watercolourist, David Roberts. Originally from Stockbridge, near Edinburgh, in 1838 he travelled to the Holy Land, where he completed hundreds of intricately detailed paintings of the region’s epic scenery. His images of Egypt are particularly evocative, presenting a time before tourism when the only evidence of visitors was carved graffiti left by equally ancient Phoenician, Greek and Carian mercenaries, and are now preserved along with the temples themselves.

Roberts’s paintings show the pyramids and Sphinx still partially obscured by sweeping sand dunes, and temples barely excavated and largely unexplored. In most cases, the only people he captured were the odd Bedouin or Nubian tending their goats or camels, or Europeans in colourful uniforms. For most of the western world, Roberts was the Rough Guide of his time.

As we rounded the temples of Rameses II and Queen Nefertari and the goddess Hathor, and found ourselves completely alone standing before the towering statuary, I couldn’t help but feel as Roberts must have when he stepped ashore from his felucca. The convoy hordes were gone, and the only people around were our handful of fellow airline passengers, not all of whom had yet made it to the site. 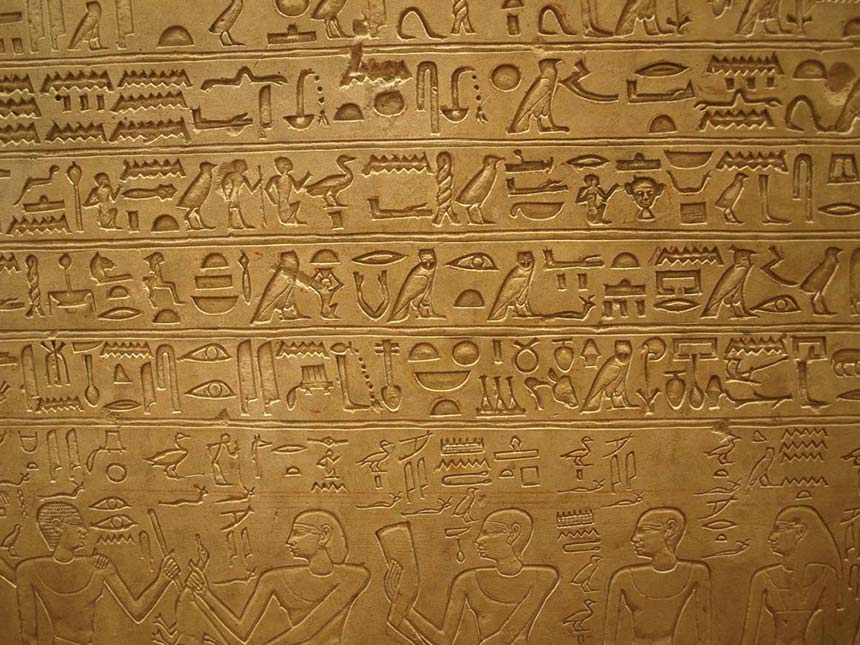 Detailed view of the hieroglyphics.

At leisure we wandered through the temples, lingering as long as we liked beneath the colourful ceilings, closely surveying the detailed hieroglyphics, drinking in the cool musty air, and gazing longingly at the intricate carvings and statues. There was no jostling for the best photographic spots, no queuing to view the treasures. If there was a drawback to our solitude it was having to actually wait for humans to enter my viewfinder in order to photographically convey the magnitude of the place.

But I was prepared to accept that hardship.

There was a slight shuffle and out of the gloom a man in a baggy black suit and large fish tie emerged from behind one of the pillars inside the Great Temple. He stepped forward and nodded, making the universal gesture for a cigarette. We shrugged that we couldn’t help, and as he melted back into the shadows his jacket billowed, revealing a submachine gun slung over his shoulder beneath the suit. We had the place to ourselves once again.

Back in the sunlight, all but the shoreline of Lake Nasser below was obscured by a heavy haze. We gazed in awe at the enormous 20-metre high carved statues of Rameses II that towered overhead, and took swigs of water from our bottles, now as hot as tea. We strolled back to the entrance and sat in the shade awaiting the shuttle back to the airport.

I looked at my watch and estimated that the convoy was still barely halfway back to Aswan. I was somewhat jealous that they were gazing through the windows at the passing endless desert and small, rural villages, but having Abu Simbel all to ourselves for a few hours more than made up for that loss.

T. S. Eliot once famously wrote that “The journey, not the arrival, matters.” As someone who has been known to seek the most circuitous and least-trodden route—and uses toothpicks to prop open weary eyelids, lest I miss something along the way—normally I would agree. But at Abu Simbel I learned that sometimes, forging your own path actually means opting for the fastest and seemingly least adventurous route.

Abu Simbel was built by Ramses II sometime around 1250 BC. Carved into two rocky hillsides overlooking the Upper Nile, it was designed with typical Egyptian precision to allow the light of the sun to penetrate the inner sanctum only twice a year: on the spring and fall equinoxes.

In 1959, Egypt announced construction of the mammoth Aswan High Dam. The dam would not only provide hydroelectric power for Egypt, but would also create Lake Nasser, named for the country’s then president, Gamal Abdel Nasser. However, it would also flood ancient sites, including Abu Simbel and Philae.

With UNESCO and $40 million, and some of the greatest archaeological, scientific and engineering minds in the world at hand, from 1964-68 the Abu Simbel temples were carefully sliced into more than 1,000 blocks, then reassembled in exacting detail several hundred feet away, above the projected new water line.

Despite using astrological information gleaned from NASA, and the most sophisticated computer technology then available, the best and brightest of the 20th century couldn’t match their ancient Egyptian forebears: the finished work just fractionally missed the correct solar alignment of the two equinoxes.

What If You Get Homesick?