If anything says the essence of Tokyo, it’s the mix of hypermodern cityscape with a deep reverence for nature.

Foreign visitors could be forgiven for imagining Tokyo is all skyscrapers, restaurants and bustling street scenes. But few travelers are aware that this exciting city is also home to outstanding natural beauty — and it’s just a day-trip away.

I first discovered the Okutama region in 2000 while living in Tachikawa, on Tokyo’s western outskirts. I was a 40-minute train ride to the skyscraper district of Shinjuku, heart of a city whose population roughly equalled that of my entire home country. But an hour by local train in the opposite direction took me to a world of mountain hiking trails just waiting to be explored. 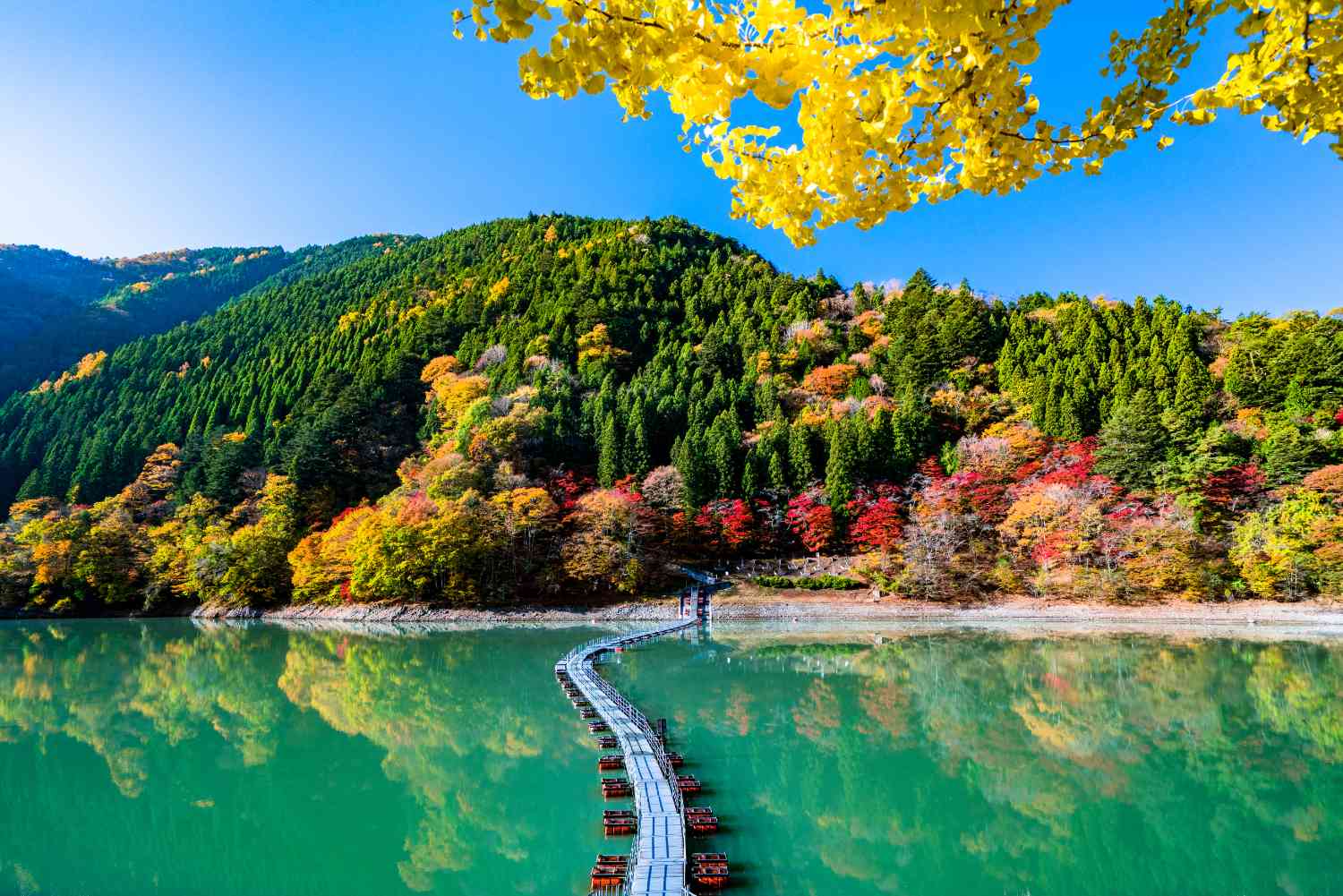 If anything contains the essence of Japan, it is this pairing of the hypermodern high-tech cityscape with a deep reverence for nature.

Most of Japan is covered by mountains. That geography crowds some 80 percent of the population into the arable flatlands, like the vast Kanto Plain which houses Tokyo.

The rest of the country is sparsely settled by comparison, and you’ll be amazed at how quickly you can leave city life behind. The Okutama Mountains aren’t especially high — Kumotori-yama (“Cloud Grabber”) tops out the park at 2,017 metres — but their steepness compensates for any lack in stature. The extreme inclines you’ll encounter on the tougher routes make for surprisingly challenging hiking. But there are trails to suit every level of fitness.

If you’d like to experience a completely different side of Tokyo, I suggest starting with Mount Mitake in Chichibu-Tama-Kai National Park. You can reach it in less than two hours from Shinjuku, so you could climb the 929-metre peak and be back in time for dinner. Getting there is easy. Just catch a Chuo line train all the way to Ome station, and then switch to the smaller Ome line towards Okutama. 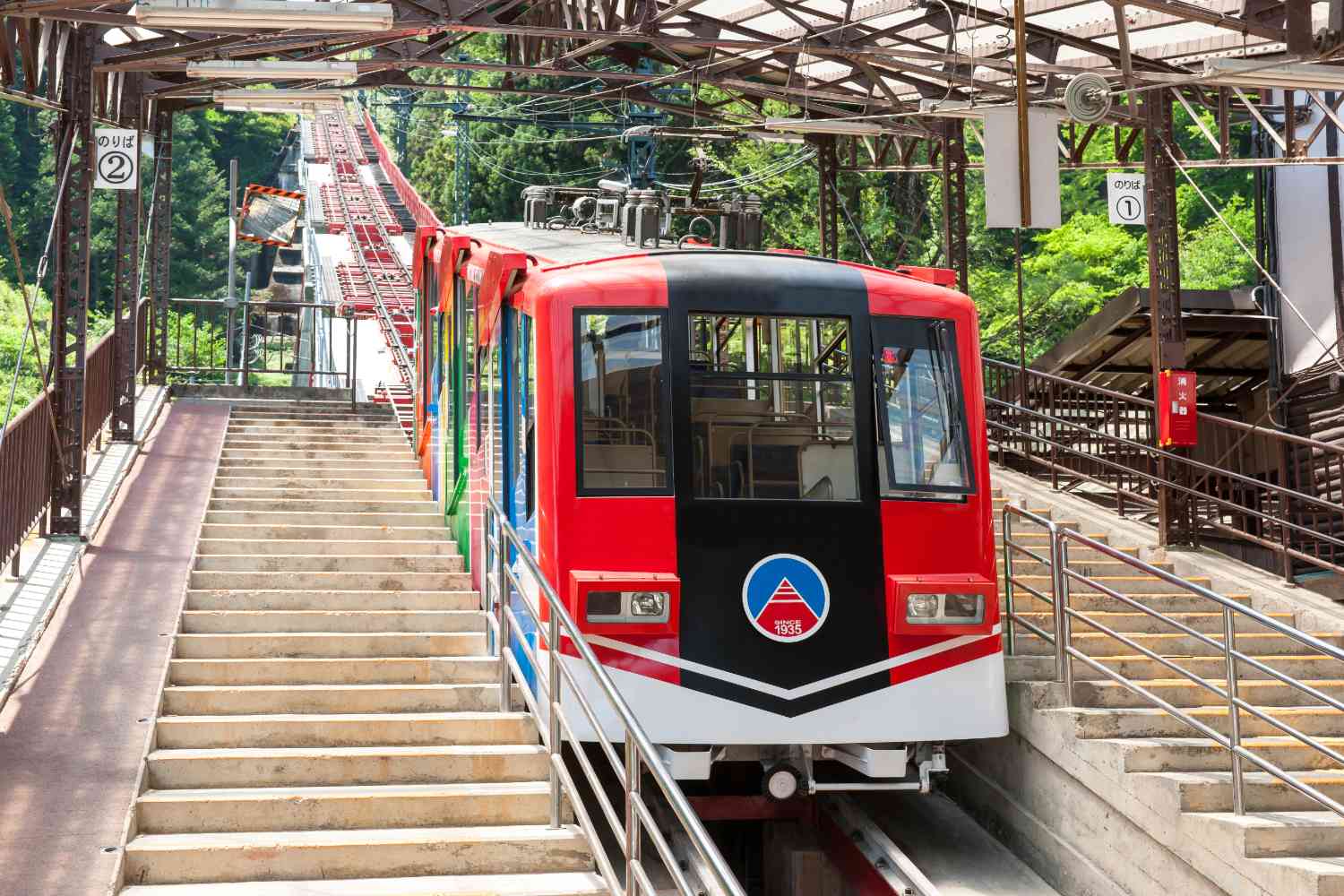 You can jump out at Mitake station and take a cable car up to the observatory, or walk up from the bottom. I chose to start my hike two stations further down the line, where a steep trail begins at the village of Kori, leading to the summit of Mount Mitake in about two hours.

As you get closer to the peak, you’ll see a cluster of traditional Japanese buildings. The first shrine is said to have been established there in 91 BCE. But we know for sure that the current Musashi Mitake shrine dates to 736 CE, and it has long been a destination for religious pilgrims.

Because this Shinto site is dedicated to wolves — according to legend, a sacred dog guided the Imperial prince Yamato Takeru to safety here when an evil sprit caused him to become lost in thick fog — the shrine is popular with Japanese who come to pray for the health of their pets. 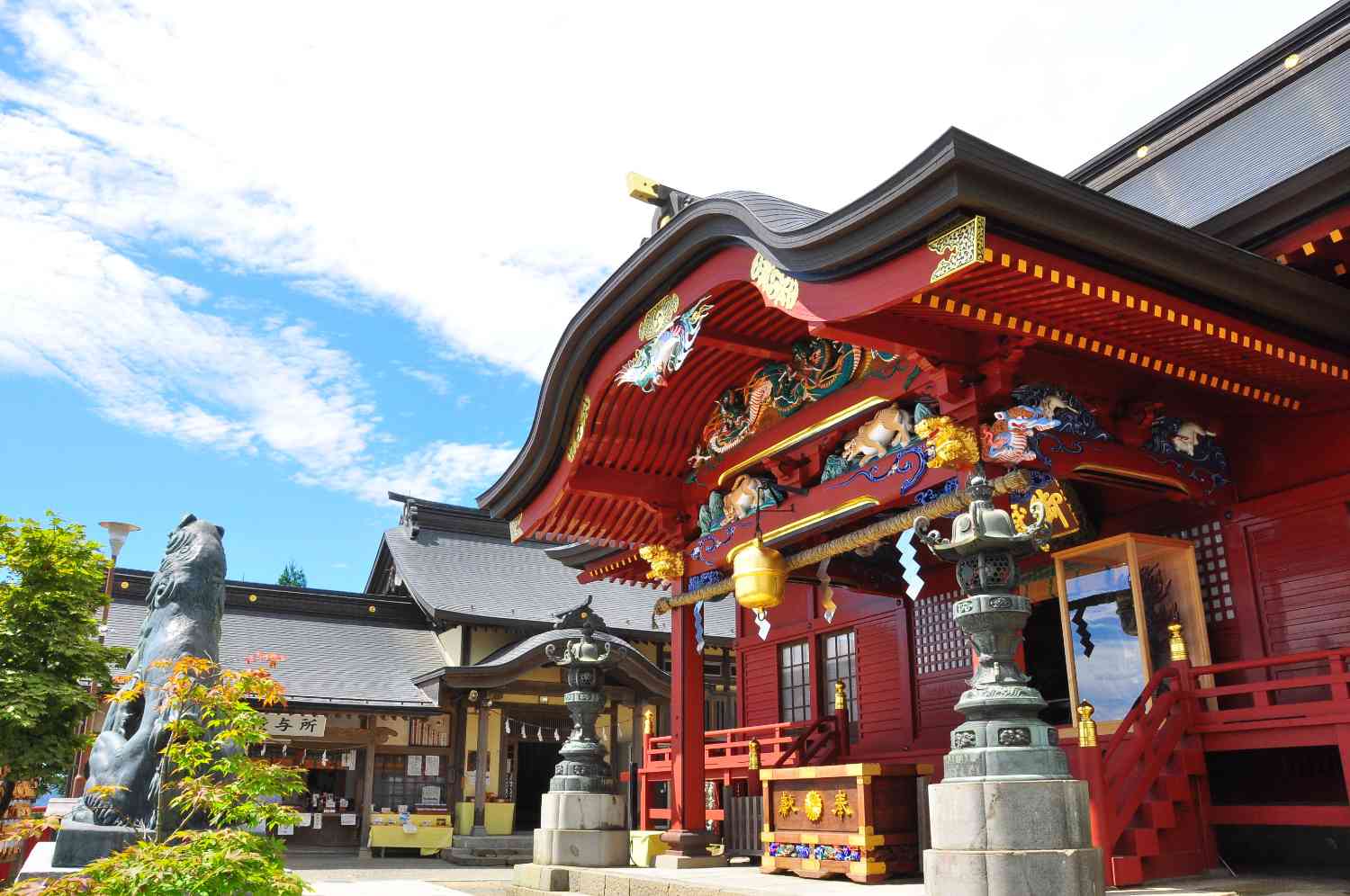 Musashi-Mitake Shrine lies at the summit of Mount Mitake. (©jooko3/PIXTA)

I’ll always remember Mount Mitake as the first place I tasted amazake: a thick, sweet drink made from fermented rice, with the consistency of porridge, and usually served warm. It was the perfect pick-me-up when I arrived after following a long trail through the occasional snow drift on an early spring day.

You’ll also find several shops near the peak where you can satisfy your hunger with two iconic local dishes. Tanuki udon is a delicious noodle soup topped with bits of fried tempura batter — but don’t worry, it doesn’t contain raccoons (tanuki is the name for the Japanese “raccoon dog”). The dark tone of the fried batter simply reminded people of the colour of this mischievous four-legged prankster.

When you’ve sated your hunger with a warm bowl of noodles, order a plate of the mountain’s other delicacy: warabimochi, a tasty jelly-like dessert made from bracken starch cut into squares and dipped in kinako (toasted soybean flour). Don’t worry, you’ll burn off any excess calories on the hike back.

You have several options for the descent. You could take the cable car to Mitake station, or you can do as I did and follow a ridge trail to the nearby peak of Mount Hinode, and then down to Hinatawada train station. I hiked the route in early spring when the entire valley leading to Hinatawada was bursting with pink and white plum blossoms.

If you follow my route — Kori to Mount Mitake, onwards to Mount Hinode and down to Hinatawada — you’ll have a serious five-to-six hour hike.

I often sought the solitude of those mountains when city life felt overwhelming. I’d throw a couple onigiri (rice balls) and a boiled egg into my pack, along with a dented thermos of green tea, pull on my boots and hop an Ome line train to a small village. Each trail began near a train station, so it was possible to hike from one station, summit a peak or two, and descend to another station to catch a train home. 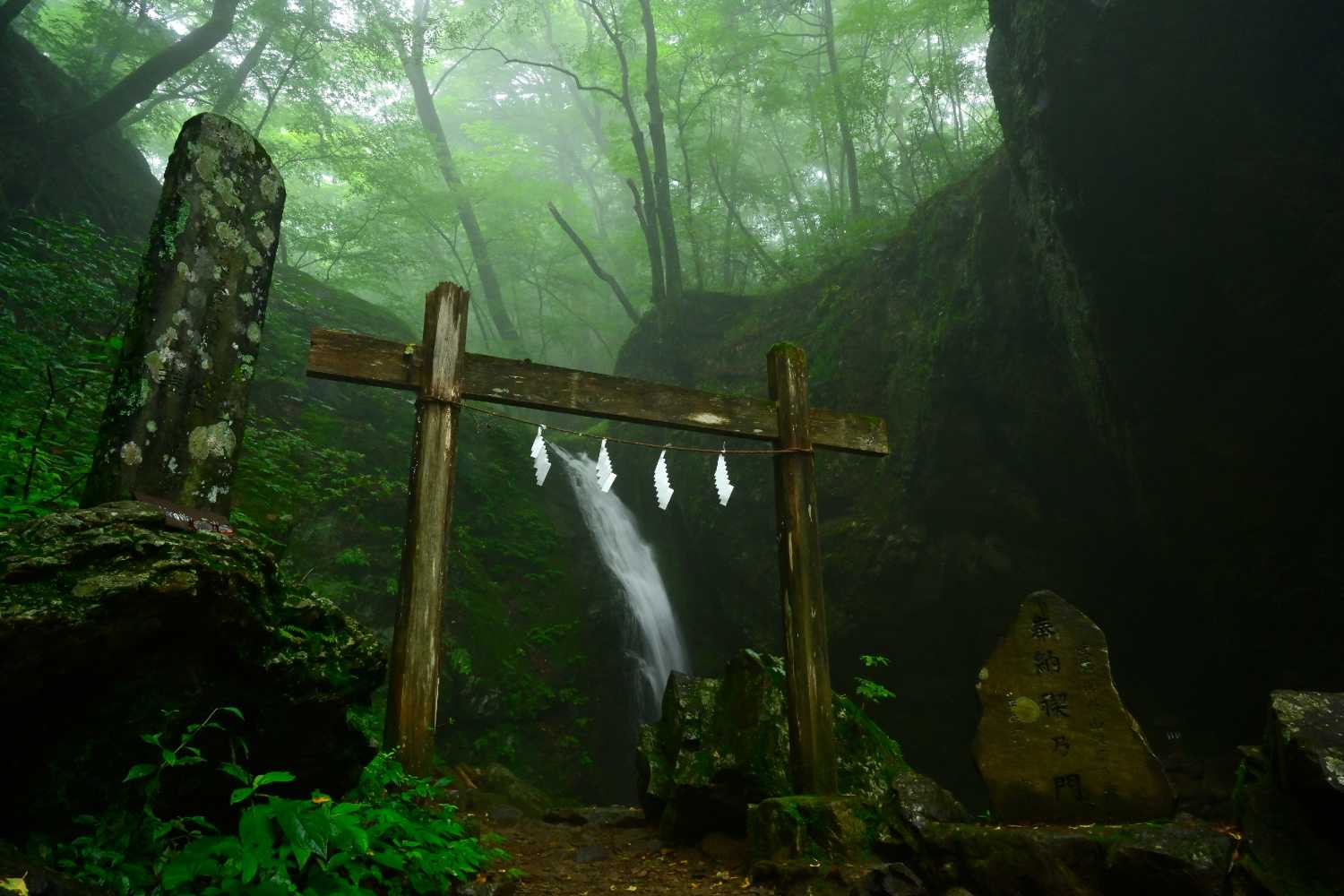 A steep ascent might be followed by groves of tall thin cedars, where floating mist muffled birdsong and the crunch of my boots. Clear mountain streams gurgled and splashed, leading me to the dull roar of the waterfall that was their source. And sometimes a trail crossed an overgrown clearing, where the carved wood of a long forgotten Shinto shrine had greyed beneath decades of snow.

You can buy excellent topographical maps that show hiking trails for every region of Japan — including Okutama and Mount Mitake — at the Maruzen bookshop near Tokyo station.

Despite the easy accessibility of trails, Yama-nobori (mountain walking) didn’t seem to be a pastime that appealed to the young. The other hikers I encountered were all middle-aged or elderly, well-equipped and incredibly fit. On the more popular routes, hiking groups lugged their camping stoves to the peaks, where they cooked enormous meals, sipped beer, and posed for group photos.

Initially surprised to see a foreigner so far from the city, they’d ask “How many in your group?” And they would always look at me with pity — and say “kawaisou” (“how sad!”)— when I held up one finger.

Perhaps they feared I’d fall prey to a tengu? A red creature with a combination of human and bird attributes, this long-nosed winged beast is a minor divinity graced with the power to increase the fortune of human beings. They’re said to lurk in the higher peaks, where they sometimes kidnap humans and play poltergeist-like pranks.

Now you might not believe in such things, but as for me, I’m not so sure. There have been times, hiking alone on a misty mountain slope, when I’ve heard strange voices floating up from the darkness of a ravine; voices unlike any wild creature I’d ever encountered. Maybe, just maybe, there were tengu down there.

Where the Sun God Reigns | Why Greece is a Great Destination