The Outpost Mini-Guide to Travel in Namibia

A mini-guide to a southwestern African destination: from its wildlife to wild coast, its deserts to its canyon.

Namibia is a year-round destination, but its climate varies depending on which topographical region you visit: the western Namib Desert, the Central Plateau, the Kalahari region in the east, or the Kavango and Caprivi regions in the northeast. The world’s driest desert, the Namib, remains mild year-round. 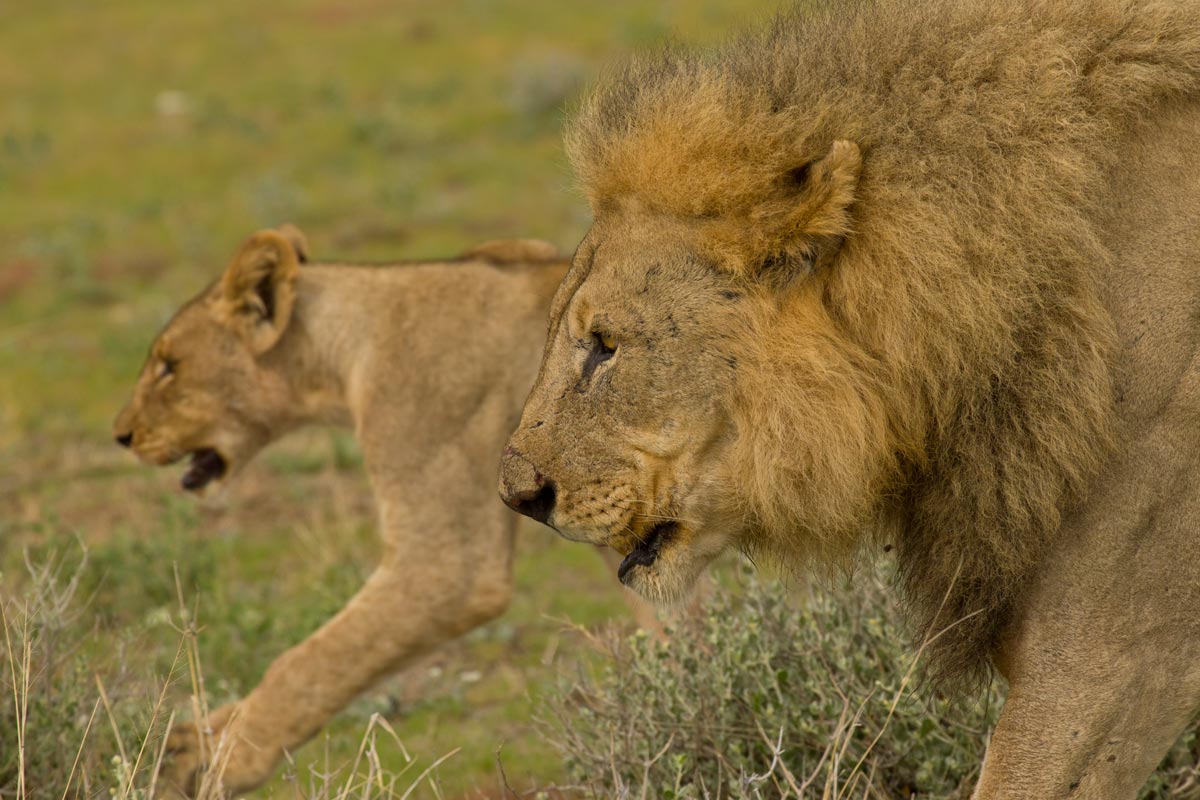 Lions strutting, a spectacular sight in a self-drive Namibian safari. (This photo and above: Tomoko Goto)

During summer months, from November to April, temperatures are quite hot, but can drop below freezing at night. This time of year is also when the rain falls inland. Spring and fall are pleasantly warm, but fall often brings dust storms. Namibia winters can be cool but the days are generally warm and enjoyable.

Most visitors enter Namibia through Chief Hosea Kutako International Airport, located 45 km east of Windhoek, Namibia’s capital. A number of carriers, including Air Namibia, arrive at the airport multiple times a week. From Canada, you can fly from Toronto, Montreal and Vancouver, usually with a stopover or two along route. Windhoek’s Eros Airport serves domestic flights.

There are myriad ways to get around Namibia, but by road is the easiest. Namibia has a great road system that runs the length of the country from the South African border to the Botswana border to the Angola border. The least-expensive car or motorcycle rental will cost you between $40 and $80 CDN a day. A compact car or motorcycle will suffice on C-numbered highways, but you’ll want a larger 4WD vehicle if you plan on taking D-numbered roads. You can rent a car through a trip operator or tour company.

If you would prefer to avoid the hassle of renting a vehicle, many tour companies in Namibia also provide transportation services. Public transportation is an option. Namibia’s two main bus services, the Intercape Mainliner and TransNamib’s Star Line, leave from Windhoek to various cities within the country.

Renting a car or taking a tour is your best bet if you want to see the most Namibia has to offer. You can rent through a trip operator/tour company. (Outpost’s Ryan Murdoch went through Safari Drive). Typically they not only lease out vehicles (and camping gear), but can arrange accommodations and help you plan a driving route. If driving on your own isn’t your style, know that many tour companies in Namibia also provide driver services.

Windhoek is located 1,680m above sea level in the Khomas Highland plateau area at the epicenter of the country. Namibia’s capital—known as a very clean city—offers many guided tours of the city itself (with its many impressive viewpoints), from boat cruises to walking tours, and boast a great café culture by day and a growing nightlife scene, with restaurants, bars, and clubs to explore. Just a few kilometres north of the city is Soweto Market, where you can buy just about anything.

If you head west into Skeleton Coast territory, you’ll end up in the town of Swakopmund, right on the Atlantic Ocean. Namibia is a former German colony, and Swakopmund is still characterized by this. The town is quaint, and boasts beautiful beaches, adventure-sport opportunities galore, and excellent beer.

Etosha National Park is one of the world’s greatest wildlife viewing venues. At more than 22,000 sq. km, the park is home to 114 mammal species, 340 bird species, 16 reptiles and amphibians, and one fish species. Located just north of Windhoek, the best way to explore it is either by renting a vehicle or joining an organized tour (from a local operator). You will easily spot lions, cheetahs, giraffes and elephants, as well as several endangered species like the black rhino and the black-faced impala. Officially declared a game reserve in 1907, the park has good roads, lookout points and rest stops, all to make wildlife viewing highly accessible. The best time to visit is during the dry season, from June to November. There are three main entry gates; but you can only enter the western side if you’re with certain tour operators or have booked accommodation at the Dolomite Camp inside the park.

South of Windhoek and Swakopmund, near the bottom of the Namibia, is Fish River Canyon, the second-largest canyon on the planet (after the Grand Canyon in the US) at more than 1,800-feet deep, 27-km wide, and 160-km long.

There, you can hike the spectacular 85-kilometre Fish River Hiking Trail. The trail takes approximately five days to complete, but you get to wild camp along route under magnificent starry dark skies. The trail begins at the main viewpoint at Hobas and end at Ai-Ais, where there’s a hot springs’ spa. Since it can be a strenuous and rugged journey, the government of Namibia requires hikers to have a medical certificate of good health before entry onto it. Once in the canyon it’s difficult to exit without falling the trail; in emergencies, hikers must be airlifted out. Nonetheless, the Fish River Trail is popular and requires you to book ahead, as it’s only open May to September.

Explore culture at the Caprivi Strip

If you’re looking for a chance to relax, you might try the Caprivi Strip in northeastern Namibia, which is quite different from the rest of the country. As the strip is oddly shaped, it’s somewhat isolated but shares its borders with four countries: Angola, Botswana, Zambia and Zimbabwe. Despite this, six Indigenous peoples reside here, including the Subia, Yeyi, Mafwe, San, Tortela, and Mbukushu, who have all adapted the Zambian language of Lozi. Visitors have an opportunity to learn about their culture and history, about Caprivi’s unique history, and to enjoy its lush landscapes, forests and wildlife.

The strip also boats four national parks: Bwabwata, Mamili, Mudumu, and Mahango. While all the parks are beautiful, tranquil places, Bwabwata is perhaps the most unique, with the local people living harmoniously with a thriving wildlife population. There are lots of local eco-tourism opportunities as well, which help the Caprivian people’s long-term conservation and quality of life goals.

They Call It Gitchigami: a Mother-Son Kayaking Trip on Lake Superior

An Outpost Mini-Guide to Travel in Chile