Is Nicosia, Cyprus, the most divided capital of the world? Here’s Outpost contributor Dario De Santis in North Cyprus. (Part 2)

We are back to Nicosia, the last divided capital of the world. Angeliki (my girlfriend) and I have spent the first four days of our Christmas holidays in the Greek Cypriot part of Cyprus; we are again crossing the Green Line—the buffer zone established by United Nations Peacekeeping Force in Cyprus between North and South Cyprus—in order to spend the remaining three days in the Turkish Republic of Northern Cyprus(TRNC).

In my previous article on Cyprus I discussed the vintage charms of the Turkish section of Nicosia (Lefkoşa in Turkish). Now it’s time to leave the capital behind and explore the remaining areas of North Cyprus.

Compared to its southern counterpart, the Turkish side is more pristine and less developed. This is mainly due to the state of uncertainty of this self-proclaimed Republic, recognized as a country only by Turkey, from which it depends politically, militarily and economically. Despite the international embargo on its airports and ports—which means that you can only reach Northern Cyprus via Turkey—tourism in the region continues to grow. It comes as no surprise that people continue to make North Cyprus a must-visit destination considering its rich cultural and natural heritage. Nevertheless, most of North Cyprus has avoided the negative effects of mass tourism and, especially in the low season, it really is a hidden Mediterranean paradise—an incredibly affordable one at that!

Kyrenia and the Northern Coast

For our stay we have chosen a small resort a few kilometers west of Kyrenia (Girne), the main tourist destination in North Cyprus. We booked only one day ahead and found a real bargain: only 16 € for a double room, breakfast included, and the hotel is right on the seaside. One of the great advantages of traveling off season! 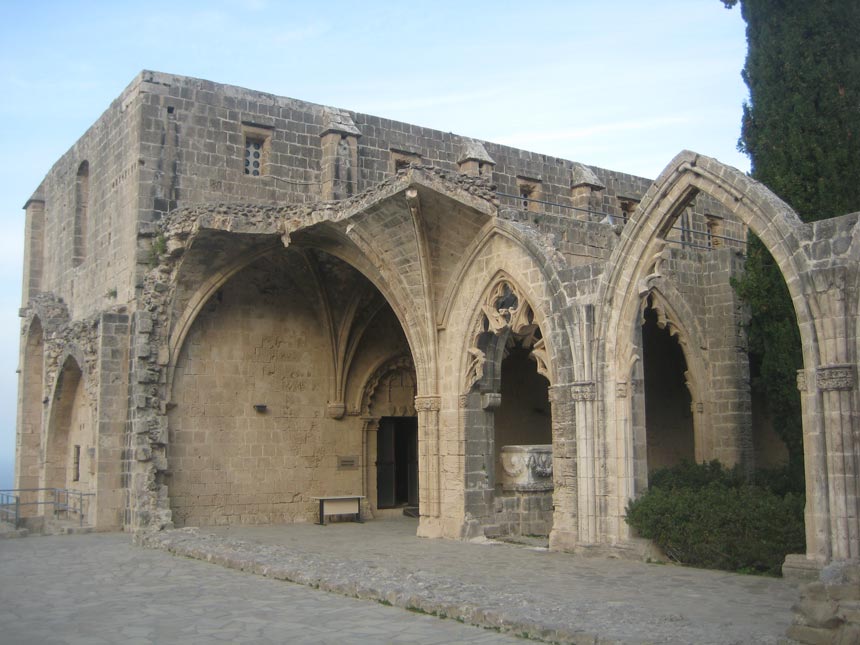 Being near the sea in winter always arouses contrasting emotions in me: a sweet nostalgia as my mind retraces the happy, bygone moments the sea gifted me with, and, at the same time, unconsciously I wonders if and when that happiness will return. Bearing this feeling in my heart, we walk along the empty beaches which in summer would be dotted by hundreds of beach umbrellas and sunbeds. Next to the hotel resorts, the night clubs and the restaurants there are also many casinos, another important asset of the tourism sector.

Rather than try our luck in the casinos, we prefer to invest our money in much more rewarding, solid investments—I’m talking about food of course! Living in Istanbul we are already very familiar with Turkish food, but we never turn down the opportunity to taste some local specialties such as şeftali kebabı (a roasted sausage wrapped in caul fat) and pirohu (a sort of ravioli stuffed with hellim, a local cheese).

As we drive west, the resorts and the concrete buildings give way to long stretches of sand and trees. This is the greenest area of North Cyprus, renowned for its abundant production of citrus. These are the same groves we were looking at two days before, sloping down from the Troodos Mountains to the huge crescent-shaped Morfou bay. Before heading back to Kyrenia, we stop over in the quiet old town of Morfou to see the remarkable Frankish-Byzantine structure of St. Mamas church, which since the Turkish occupation has been serving as an icon museum.

In the afternoon we are in Kyrenia, arguably the most charming town of North Cyprus. Its pretty harbor, where dozens of colorful boats are moored, is the ideal place for a stroll and a drink in one of the several bars and cafes of the waterfront. After a coffee, we end our stroll at the castle, housing the Shipwreck Museum. Even for one not keen on archaeological and maritime artifacts, a visit to the castle is definitely worth it, if only for the magnificent views from the ramparts. 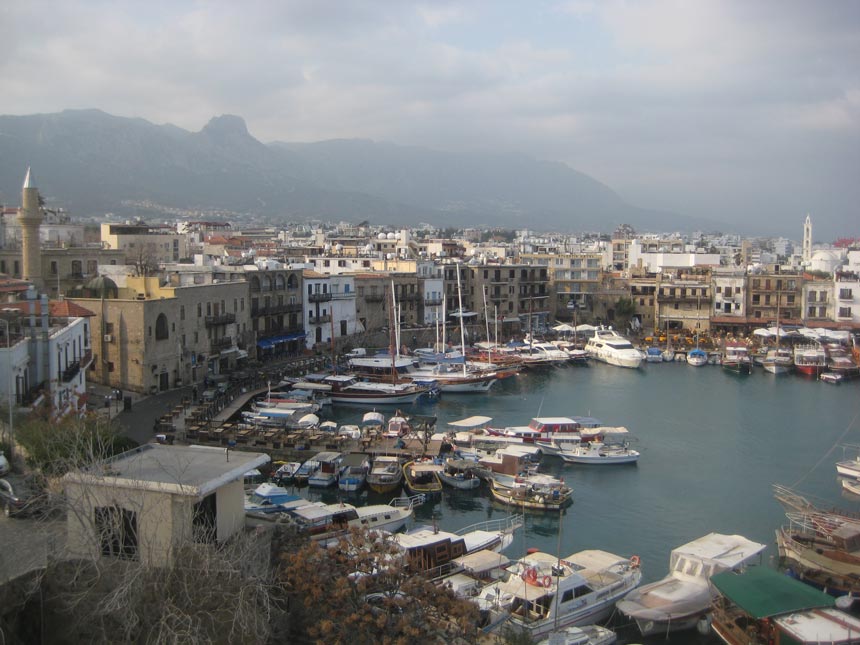 Another look at Kyrenia’s beautiful harbor

Even more superb is the panorama we enjoy from Bellapais village, on the slopes of a hill a stone’s throw away from the city center. Here rises Bellapais Abbey, an architectural jewel whose allure the passage of time could not impair. Enveloped in a peaceful atmosphere, we roam around thick stone walls, slender Gothic arches, austere rooms and carved gravestones of Lusignan kings until the warm light of sunset descends upon the cypresses and the city lights begin to glow. 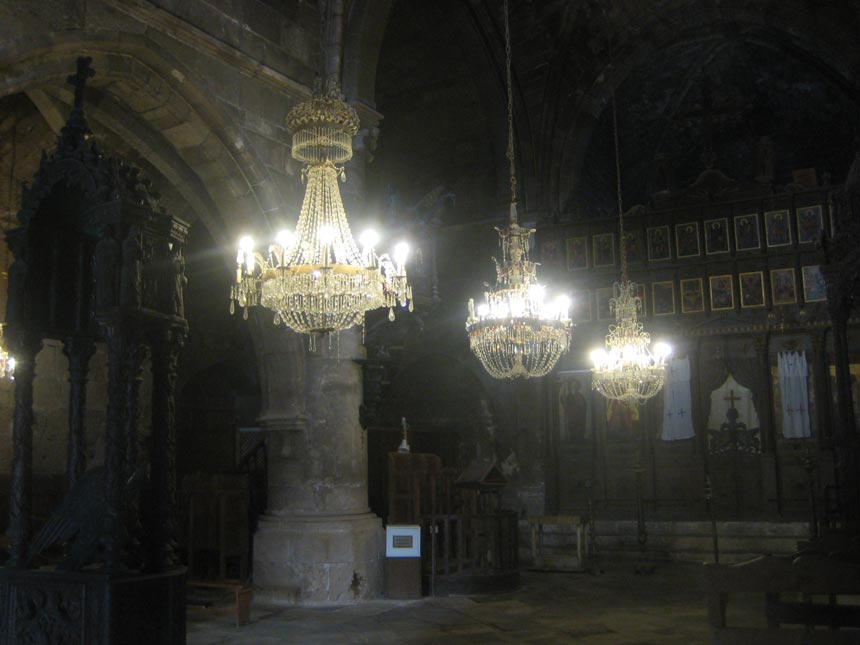 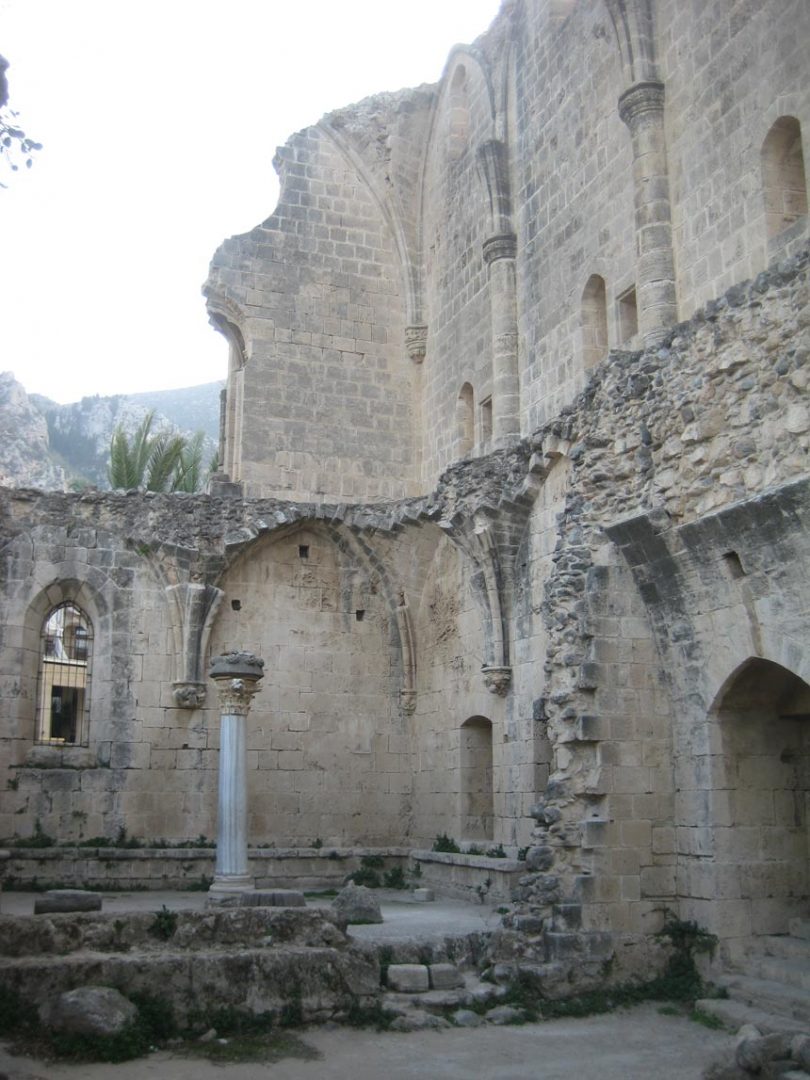 More magical places are hidden in the mountain range framing Kyrenia and the coast. The most evocative massif is known as Pentadaktylos (“Five fingers”), due to its five peaks resembling the fingers of a hand. 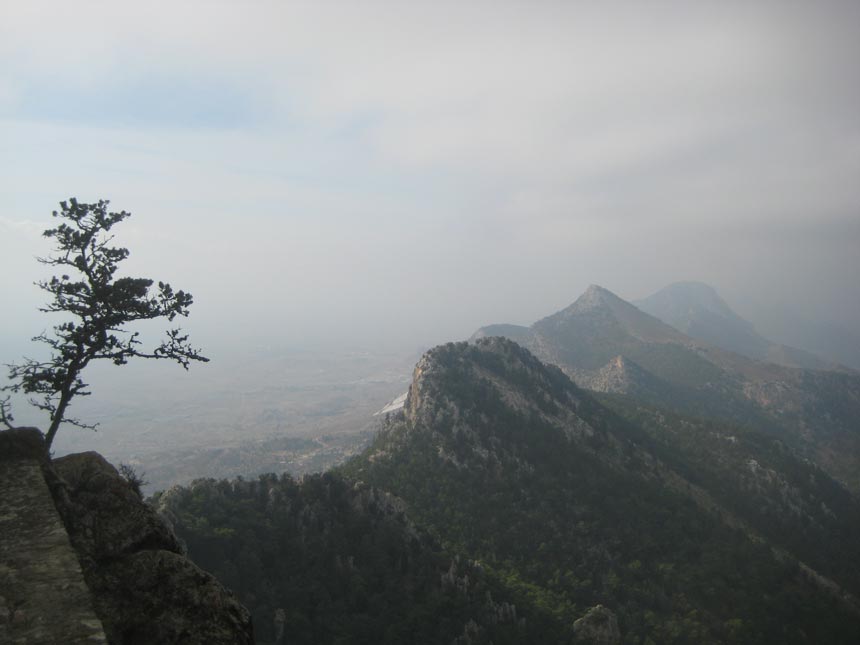 Nestled on the arduous slopes of these rocky mountains are three picturesque castles: St. Hilarion, Buffavento and Kantara. Looking at the wild vegetation reclaiming these history-exuding ruins for itself, I can’t but reflect about the frailty of man and of his works, doomed to succumb to the incessant act of time and nature. St. Hilarion castle is the best preserved and easy to reach of the three, being located about 10 km from Kyrenia.

In order to get to Buffavento castle, which is allegedly the inspiration for the Disney logo, we drive along a windy, narrow road and climb a steep cliff. Kantara castle is a bit out of the way from Kyrenia so it’s advisable to visit it on the way to the Karpaz peninsula, as we did. The breathtaking view is woth all the effort to get to these castles. 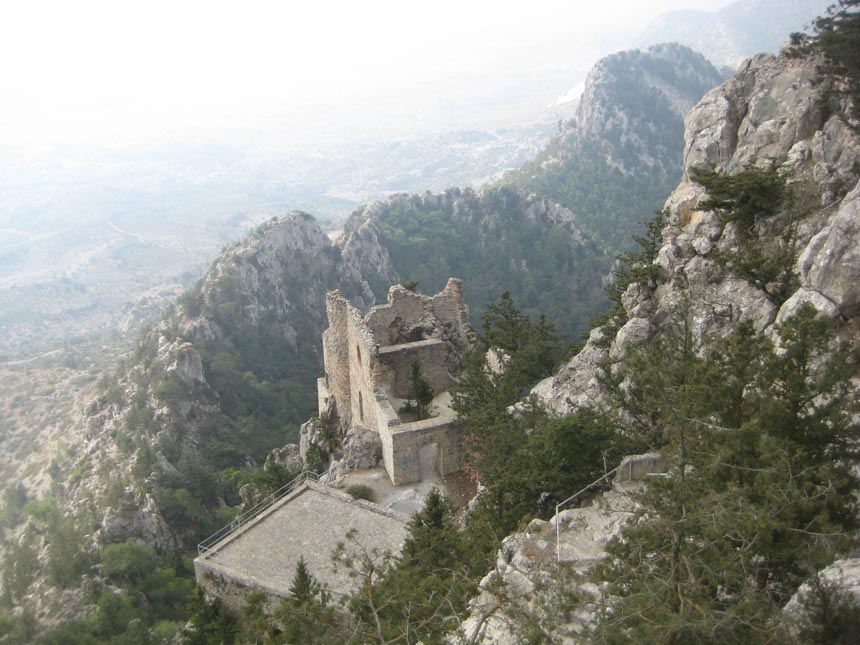 Along the road to Buffavento 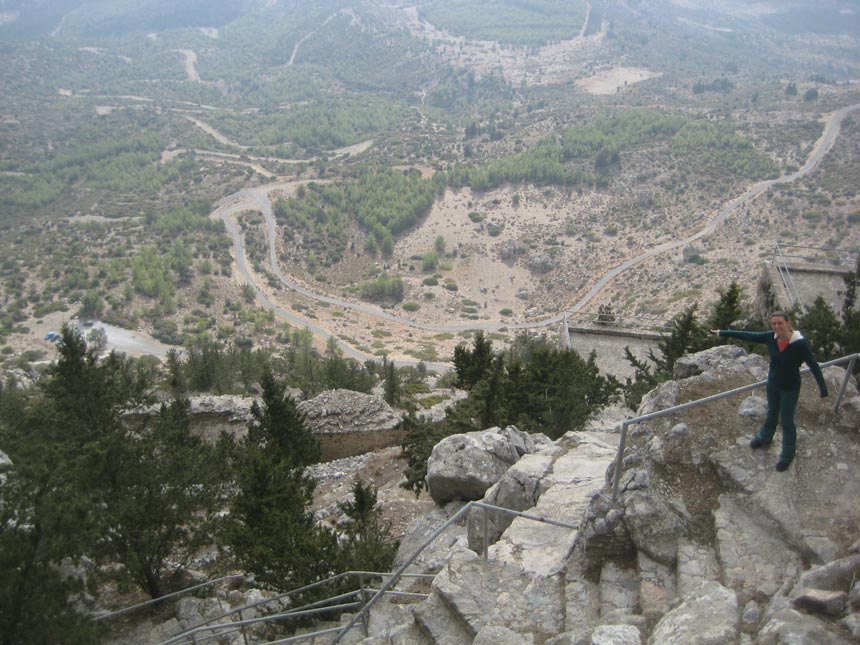 Hidden Treasures of the East Coast

Most travellers don’t make it to the east coast. They miss out on a lot! The isolation of this area adds to its great treasures like the ancient Greek city of Salamis. Paved walkways flanked by rows of columns, mosaics, latrines, agoras, temples and an astonishingly well-preserved theater with a sea view make up this stunning archaeological site. Yet, the only visitors are we and a Russian couple. 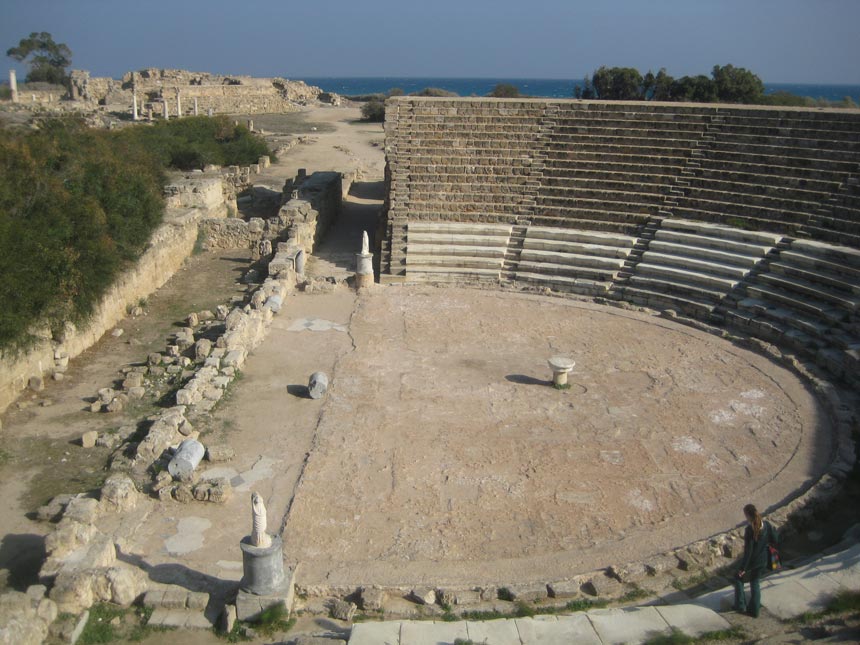 In the Middle Ages nearby Famagusta was one of the most flourishing cities of the Eastern Mediterranean as a main hub on the commercial route between Western Europe and the Levant. The massive Venetian walls and towers still encircle the harbor and the atmospheric citadel, where fine old buildings (many of which dilapidated) testify the city’s glorious past.

Towering all of them is the impressive Lale Mustafa Pasha Mosque, a converted Gothic cathedral. After strolling around the old town, we drive to Palm Beach Hotel in order to sneak a glance at the ghost town of Varosha. This once-fashionable suburb of Famagusta was fenced off in 1974 after the Turkish invasion and it’s been off-limits since then. 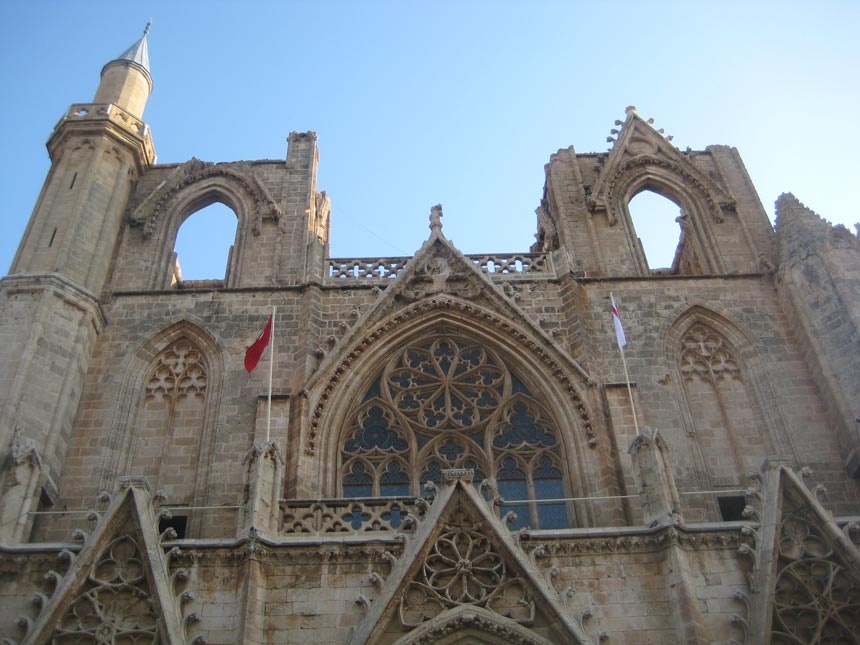 Wild Beauty of the Karpaz Peninsula

Intentionally, we have reserved our last day for the Karpaz peninsula, the north-easternmost as well as the most remote part of the island. In this bucolic countryside we come across wild donkeys and a few shepherds herding their goats and sheep.

It was not by chance that amidst this splendid isolation, the monks built St. Andrew’s monastery, a holy place to Turkish and Greek Cypriots alike. There are many pristine beaches in Karpaz, but the most spectacular is by far Golden Sands Beach, where turtles come lay their eggs. Here, contemplating the sky and the sea merging on the horizon, we suddenly forget about all the hassle of civilization and even tragedies like that of a divided island dwindle before the immensity of the world.

How to Give for the Traveller: Your Ultimate Travel Gift Guide

How to Get Through Christmas Far From Home