From Cusco to Lima, to the Andes, Amazon and Pacific Coast, Peru’s geo-diversity is matched only by its modern vibe, ancient history and incredible adventure options! Here’s a short guide to get you started.

Peru has become one of the world’s top travel destinations. A South American country sliced by the Andes—the world’s longest mountain range—that’s covered in rainforest and bordered by balmy Pacific Ocean coast. Over the past three decades, as adventure travellers and world-culture enthusiasts have flocked to it by the millions, its tourist infrastructure and adventure options have skyrocketed right across coast, mountain and rainforest. 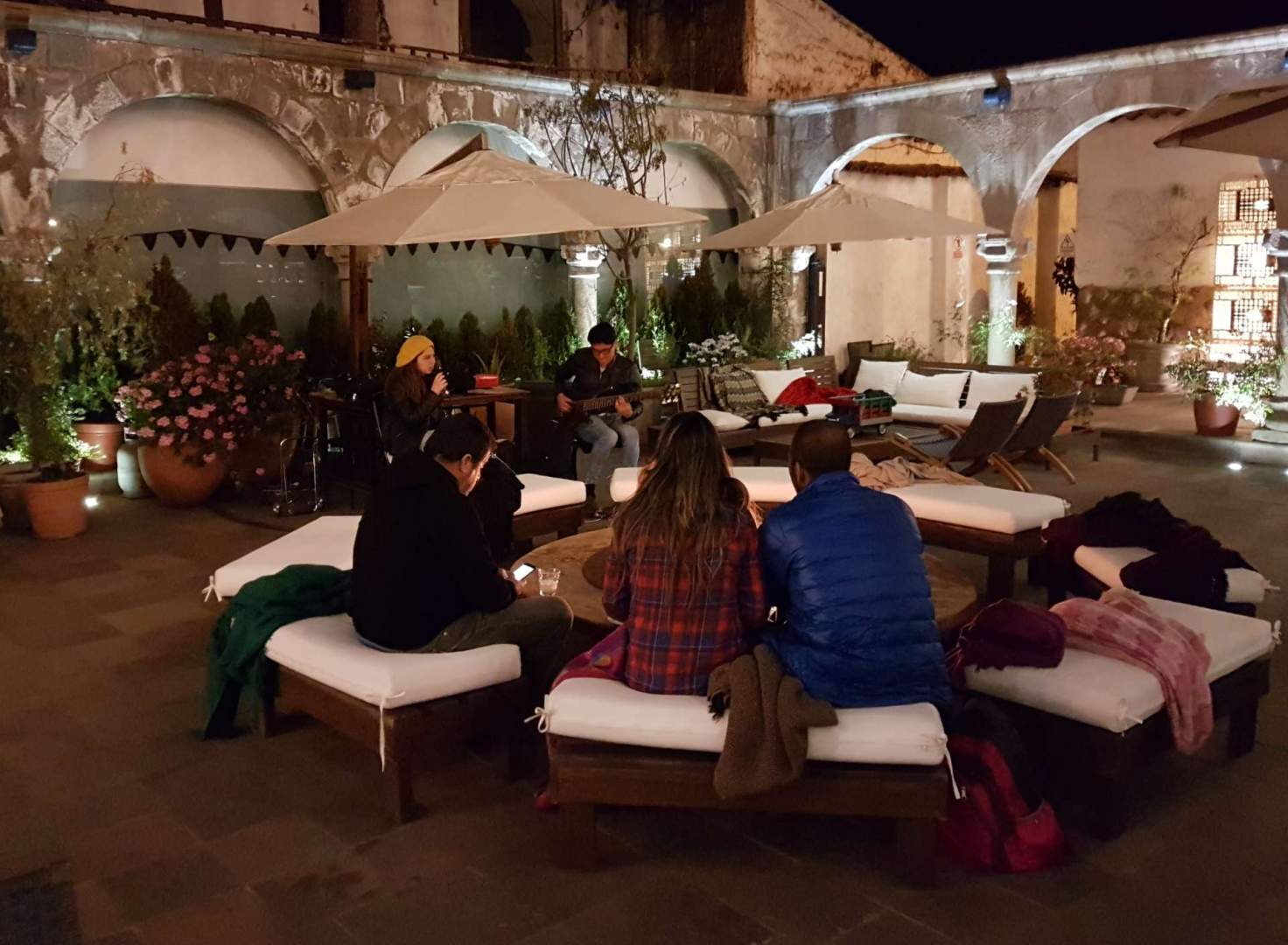 Just look at the cool, casual vibe of the El Mercado hotel in Cusco — travellers are welcomed everywhere, from modern metropolis (Lima) to ancient cities and sites (Cusco), and beyond!

So, here’s our mini-guide on how to get started on designing your own adventure in Peru:

WHEN TO GO | So many biodiversity options!

January to March brings sunny weather to the coast—but it’s also the high season so tourist traffic is higher and it’s more expensive. Prices peak countrywide due to domestic tourism during Semana Santa (Easter Week) and near Independence Day (July 28).

Surfers off the coast in Lima. Peru has approx. 2,400 kilometres (1,500 miles) of Pacific coastline, which runs its entire western flank. (Outpost)

Though there are year-round swells, the best surf is from October to March—and in Peru, surfing is becoming a big deal. September typically sees the world-famous Mistura Food Festival in Peru (usually in Lima), so if you’re a foodie traveller definitely worth considering.

In the mountains, January to March is the rainy season. The Inca Trail and other treks are either entirely closed or periodically cancelled during February for cleanup and safety (landslides). The hiking season begins in May, but June to August sees the most traffic, when the weather is cool and dry. 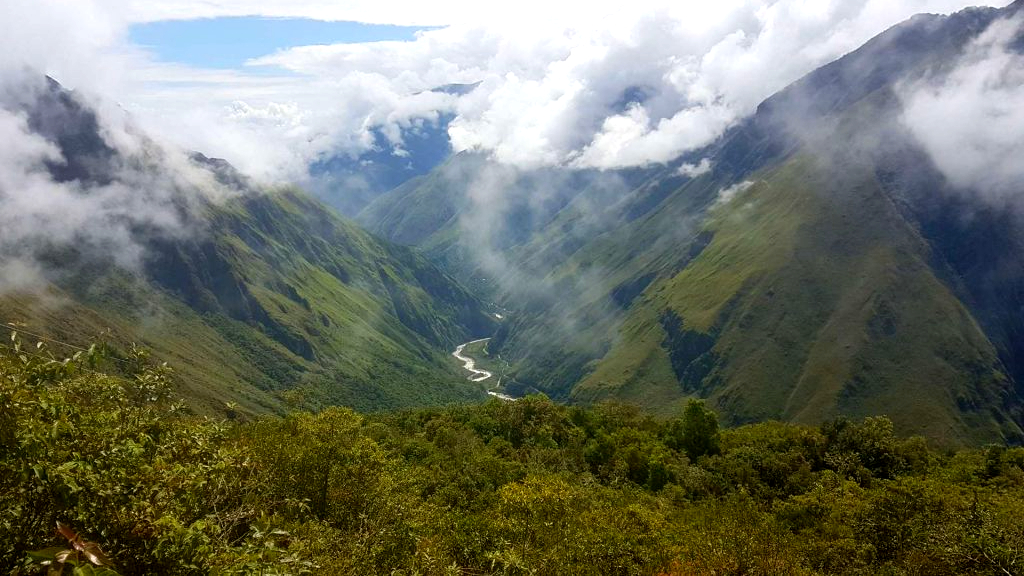 The spectacular Andean valleys and mountains you see along many treks in Peru. (Outpost)

Here’s Team Outpost on the Salkantay Trek to Machu Picchu with explorer Jeff Fuchs (a 7-day option with Mountain Lodges of Peru). 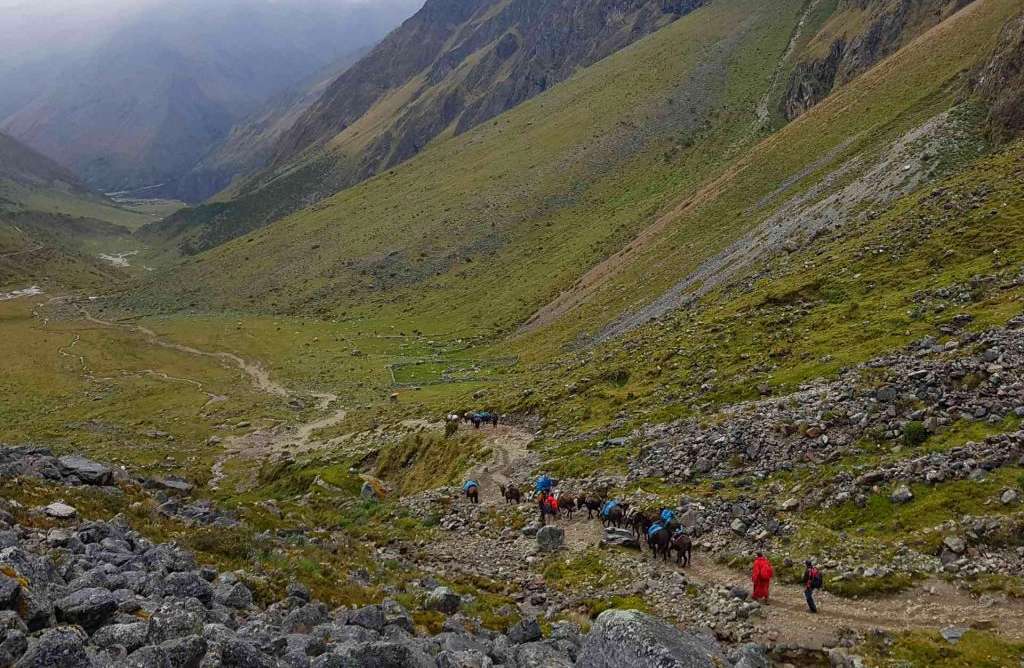 Trekking in the Andes mountains and valleys of Peru! 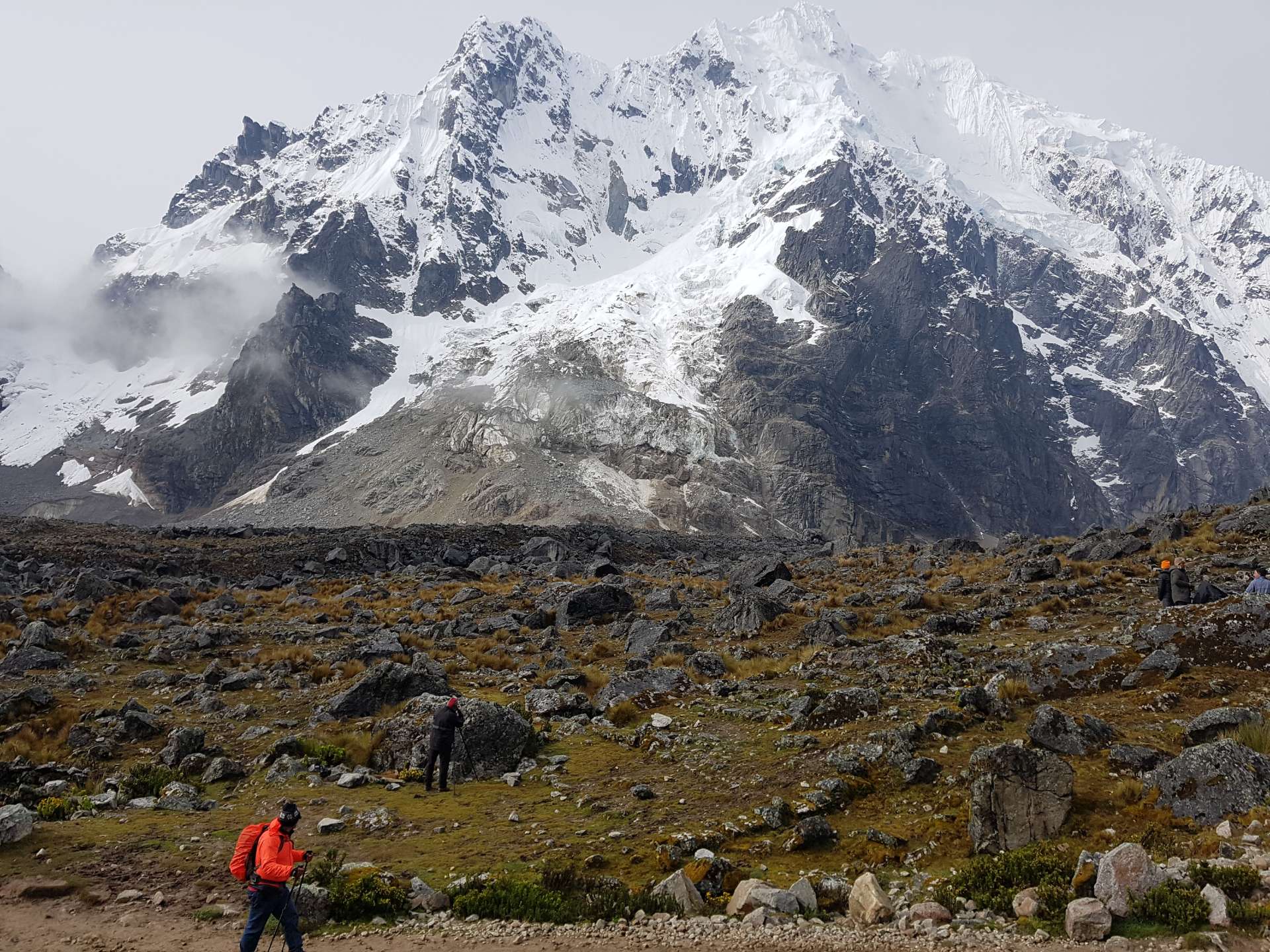 It’s an amazing experience to get so up close to mountains like these. Here, Mount Salkantay, on route to Machu Picchu. Peru has numerous multiday trekking adventures on offer.

This also aligns with festival season, notably Cusco’s Inti Raymi in June (an Incan winter solstice celebration). If you plan to travel in high season, book well in advance. The ideal time to visit is shoulder season: May, September, October.

Avoid the heavy rains from end of December to beginning of April, and the peak tourist season that follows. September to November also delivers dry weather minus the crowds, making it a fantastic time for trekking and wildlife and critter spotting.

Peru’s main international airport is in Lima, a hub for flights from all over the world. [In the wake of the COVID-19 pandemic, carriers flying to Peru and flight information is influx; with luck, later in 2021 that will change, and we’ll update this post when that happens.]  An airport in Cusco mostly serves flights within Peru and Latin America. You can enter Peru by land from Ecuador (north), Bolivia (southeast), Chile (south), and via the Amazon River from Brazil or Colombia. 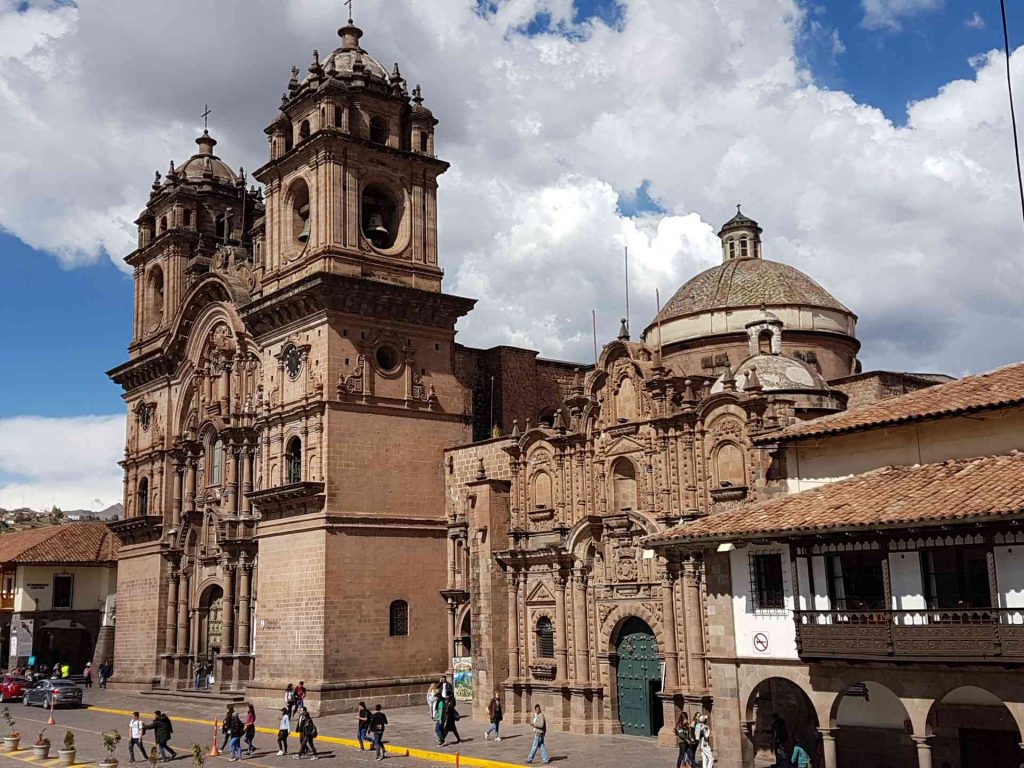 Colonial Cusco was built over Inca Empire temples and structures, parts of which are still visible today. (Outpost)

Lima is an excellent place to start exploring Peru, with domestic flight connections to Cusco, Arequipa, Juliaca (Lake Titicaca), Iquitos (north Amazon), and Piura (north surf spots), among others. You can also transfer by overnight bus to almost anywhere in the country (self-driving for tourists is not overly recommended) — Peru is connected by extensive long-distance bus routes (Oltursa, Cruz del Sur and Ormeño are popular companies). Just know weather can affect flight and bus schedules in Peru.

Walking or taking taxis (official services) are great ways to get around cities (only as local buses have flexible schedules and routes that may be difficult to decipher for non-Spanish-speaking travellers!). Travelling by bicycle is doable on designated cycle paths but difficult on heavily-trafficked roads. Mountain-biking and bicycle tours in Peru are a memorable way to visit backcountry areas.

WHAT TO SEE AND DO

Peru has three very distinct terrains: desert plains (the Coast), mountains/highlands (the Andes), and tropical rainforest (the Amazon). The coast has fantastic pre-Columbian ruins. The Andes have Indigenous cultures and spectacular mountains. The Amazon — the world’s most biodiverse forest — offers dazzling flora and fauna. 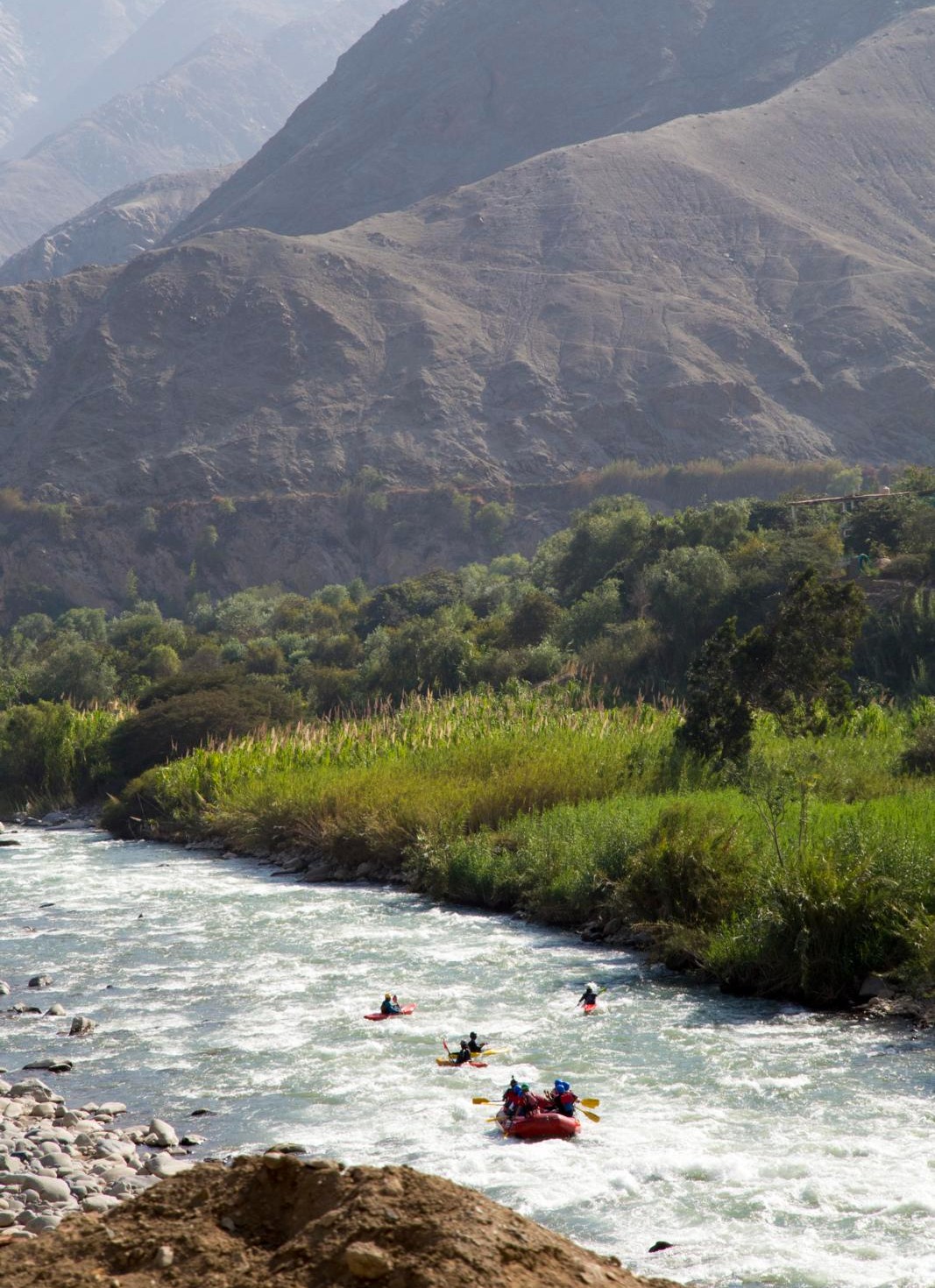 Adventure junkies have options in all three: surfing, sandboarding, paragliding and cycling on the coast; rock climbing, mountaineering, trekking and biking in the Andes; paddling, ziplining, and wildlife-watching in the Amazon Rainforest.

You can also explore Peru through its cultural heritage—it has archaeological sites, colonial architecture, festivals and museums. Foodies can get their fix with great regional cuisine, but the most renowned restaurants are in Lima. Machu Picchu is the Peru bucket-list item, but ancient ruins are everywhere.

Yes, hit spots like Machu Picchu, Lake Titicaca and the Nazca Lines—but I recommend you add Chan Chan, Caral, Kuelap, Iquitos, Trujillo, Paracas, the Sacred Valley, Huascaran National Park, Manu National Park, and Colca Canyon, among a few. Best advice I can give you on travelling in Peru? Give yourself more time. You will not regret it! 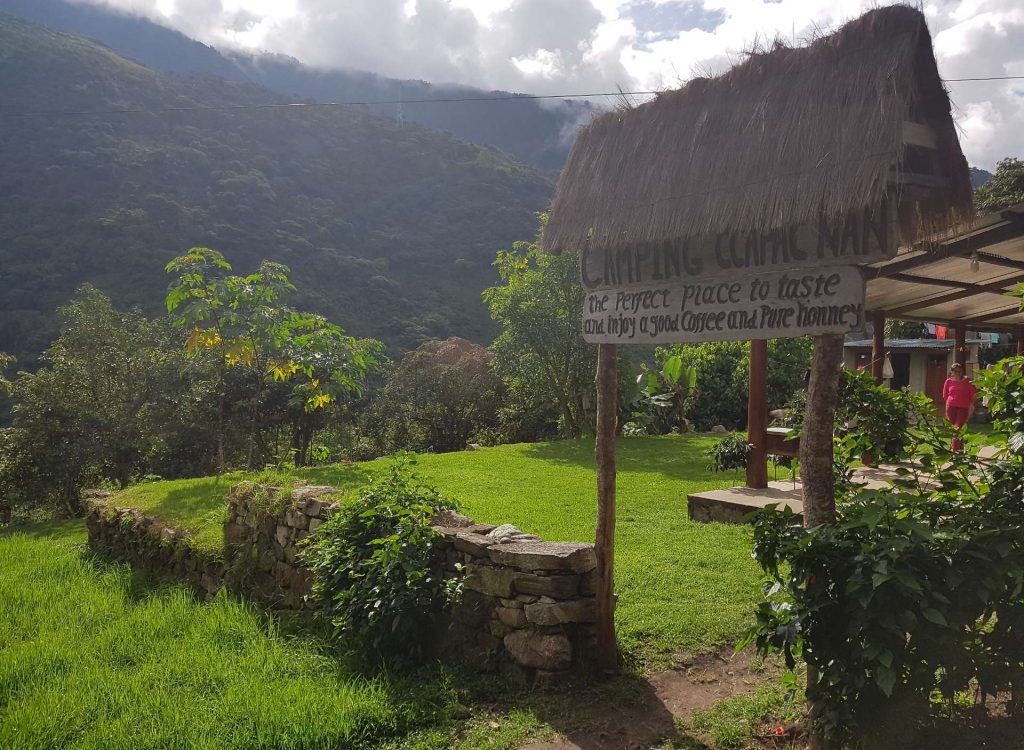 Many trails in Peru are supported by local infrastructure, like here, where you can stop for coffee along the Salkantay Trek to Machu Picchu. (Outpost)

Qoyllur Rit’i, or the Star Snow Festival, is held in a glacial valley above the road from Ocangate southeast of Cusco, always on the full-moon weekend before Corpus Christi, which is celebrated exactly nine weeks after Easter. This means some time in May. An eight-day festival, it’s a camping-only experience at an elevation of 4,600 metres. It’s the real thing, not for anyone; more for serious world-culture travellers and enthusiasts. Peru celebrates many other festivals, some more accessible than others for international visitors.

Here are a few other events for the spiritual tourist:

Corpus Christi: a procession of saints’ efﬁgies are carried through the streets of Cusco with ﬁreworks and dancing.

Adorations of the Kings: January 20, processions and parades in Cusco.

Here’s a Great Idea: If you’re visiting Cusco — and millions of trekkers and backpackers do — it’s worth catching a ride to Chinchero, about an hour outside of the city in the Sacred Valley. It’s a beautifully preserved colonial town of about 3,000 — most of them still farming their terraced plots on the surrounding mountainsides (Chinchero is at about 11,000 feet above sea level). 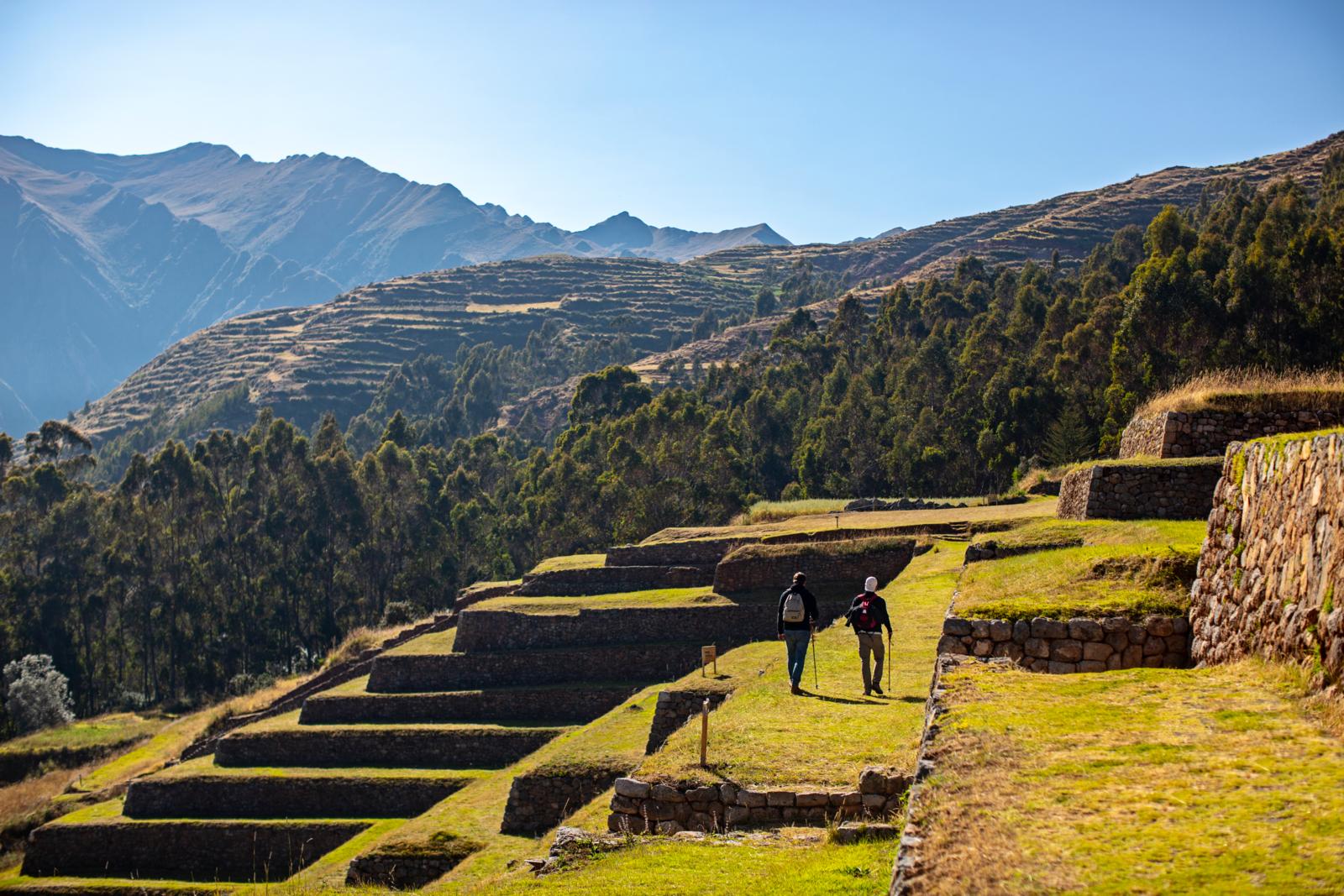 Chinchero is an archeological site in Peru worth exploring. (Daniel Silva/PromPeru)

No cars are allowed into Chinchero proper—the rutted, rocky streets are narrow and shared with livestock wandering in from the ﬁelds. The Catholic church was built on top of some Inca ruins, but just past the churchyard are the relatively small but spectacular remains of Tupa Inca Yupanqui’s summer palace. He was the Inca Emperor in the mid-15th century.

But the real attraction of Chinchero is Nilda Callanaupa. Nilda has lectured at several universities, the National Geographic Society and the Smithsonian, because she has singlehandedly brought back the old Incan style of weaving from extinction. She runs the Center for Traditional Textiles, which helps over a hundred Quechan women create and sell unbelievably beautiful blankets.

The Center has a new headquarters with a courtyard where the women work on homemade looms. They also lay out all of their most recent wares for sale—there are plenty to choose from. It’s a great place to hang out for a while, watching the women work and picking up pieces of Andean history to take home. ♦

Always Wanted to Be a Runner? | Here’s How to Get Started: a How-To-Do-It Series!

Pariaqaqa, and the Spirit of the Mountain Gods | Jeff Fuchs in the Andes of Peru