Fethiye is a pleasant city with a great vibe and even better climate, but above all an ideal base for touring one of the most beautiful regions in Turkey, if the entire Mediterranean: Fethiye Oludeniz. Here’s Outpost contributor Dario De Santis in Turkey.

When the chaos of Istanbul becomes unbearable, if I have the chance I allow myself a weekend escape in warmer, quieter parts of Turkey.

In May 2014, along with my girlfriend, Angeliki, I visited Fethiye, a pleasant city with a relaxed atmosphere, a mild climate and above all, an ideal base for touring one of the most beautiful regions of Turkey and of the Mediterranean: Fethiye Oludeniz

A stroll along Fethiye’s pretty marina and palm tree lined waterfront is the best one to escape from a megalopolis. Fethiye is also famous for its rock tombs carved in the hillside above the town and the many sarcophagus scattered around the streets. From Fethiye indeed, begins the Lycian Way, an over 500 km long hiking trail which leads to Antalya running through mountains, forests, ancient ruins and beaches. However, we were not in Fethiye for the Lycian Way this time; another kind of adventure was awaiting us.

Only 14 km south of Fethiye lies Oludeniz, a wonderful tourist resort, with a blue lagoon, a long white beach and waters of such a brilliant turquoise that one would think it is artificial.

In company of our Turkish friend Sinem, we board a caique to Butterfly Valley, a little, secluded paradise accessible only from the sea. Thanks to its isolation, Butterfly Valley has been untouched by mass tourism and has kept a genuine, laidback, slightly hippie vibe. 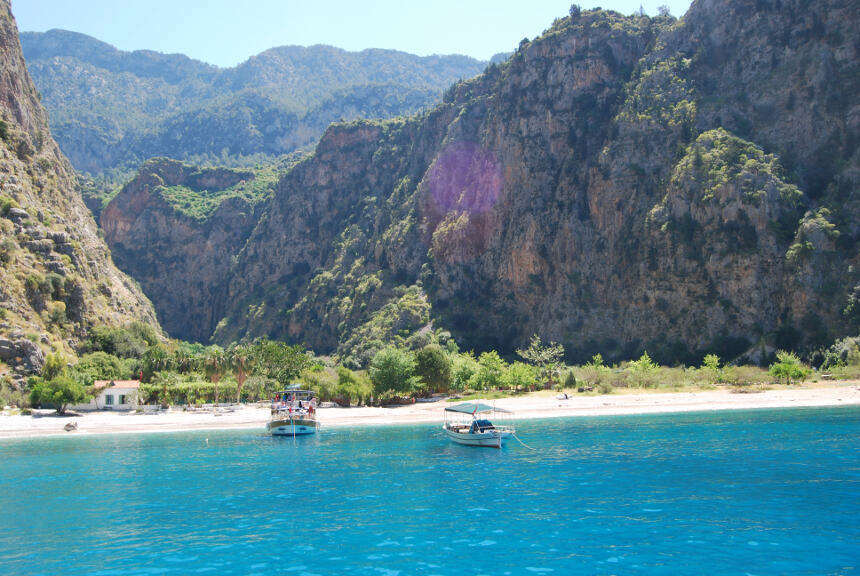 The valley, set between two steep cliffs, owes its name to the many species of butterflies found in its lush vegetation. Once here, we decide to hike first to the waterfalls and then relax on the beach later. The hike is not that easy: the way gets very narrow, in some points we have to climb the rocks and cross little streams. 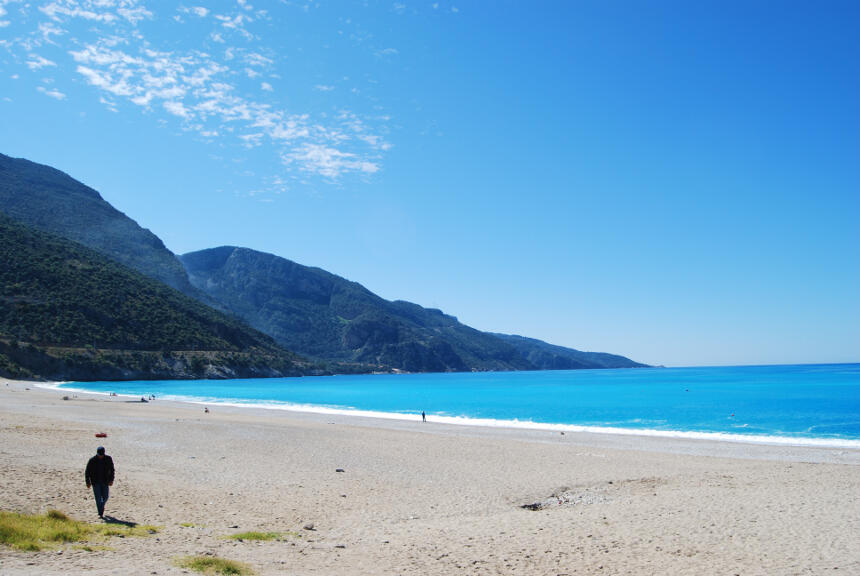 The beauty of the place and the great feeling of being plunged into nature compensate us for the effort. After the hard slog, cooling down in the crystal clear waters is all we long for.  It’s 4 pm when we get back to Oludeniz. We’ve already had an intense day and feel a bit tired, however, the call of adventure is too tempting.

Since morning we have been watching paragliders flying above our heads. Sinem explains to us that Oludeniz is one of the most popular paragliding destinations in the world, thanks to the proximity of Mt. Babadag to the spectacular sandy bay.

Angeliki and I ignored all this and we’d love to do it. So we ask for information at one of the many paragliding companies on the waterfront and half an hour later we are on a minibus headed to Mt. Babadag, 1969 m above sea level, only 5 km from the beach.

On the bus there are another 6 tourists with us, coming from France, UK and Brazil. Each one of us has been assigned a pilot by a random draw. As the vehicle winds up the narrow and steep slopes of the mountain, tension mounts and becomes palpable. At every turn a ravine opens up below us and looking outside the windows our boldness fades while fear kicks in.

“Are we crazy? What the hell are we doing?” Angeliki tells me just to break the suspense.

The pilots make jokes and simulate calmness. It’s their job and who knows how many times they have done this before. Yet, even their attitude reveals some tension as they are trying to concentrate. One of them is having a doze in the back of the car, lying on the parachutes. He’s my pilot.

After a 50 minute ride we finally reach the top. “1969 meters, here we are! Get off and get ready to fly!” shouts the man who must be the chief of the expedition to wind us up. He’s right, we need to call on all the adrenalin stored in our body.

The summit is a barren, rocky surface. Around us a curtain of clouds frame a breathtaking view: mountain ranges, towns and cities, forests and fields, the expanses of the sea stretch out as far as the eye can see… it seems like I am watching a map on Google Earth, it feels like being on the roof of the world! 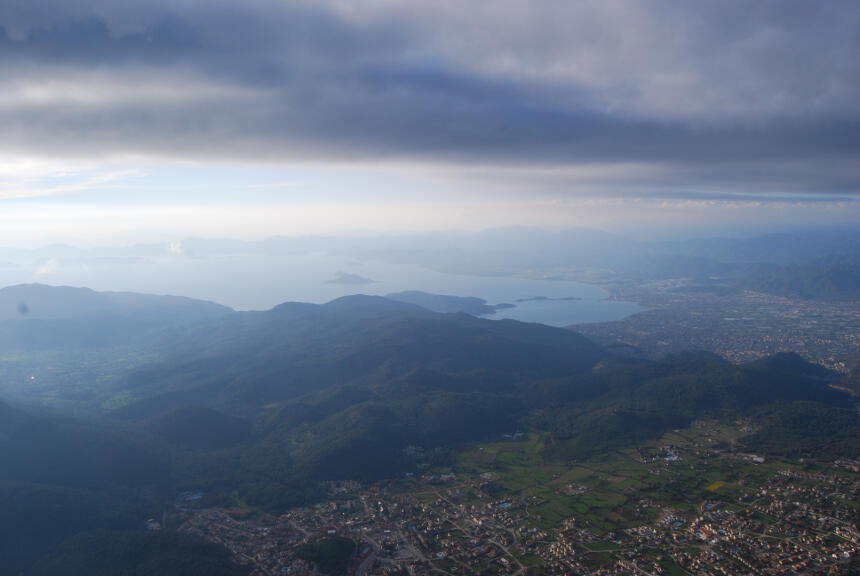 While the instructors secure us with the slings and the rest of the equipment, I chat with Angeliki and Sinem. We are all very excited. I’m wearing a sweatshirt and swimming trunks. It’s quite cold at 2000 m altitude and my legs are freezing. I expected the instructor to give me some sort of uniform or at least some trousers but this is not the case. I will have to fly like this, he informs me. “No problem, as long as you take me down in one piece”, I reply smiling.

Before the flight, Angeliki urges me to take as many pictures as I can. “The only thing that matters is seeing you again down on the beach”. We both laugh, then hug and kiss each other. Well, you never know!

The last brief instructions, a run, then the big jump…

“See you down there!” I shout to Angeliki while jumping. We took off, my feet are dangling in the air. Below us the void, nay the world! Above only the sky and the sun. I can touch the clouds with my fingers. Everything looks tiny from here, yet so immense. I’m flying. Not on an airplane, but with my own wings. It’s an incredible, overwhelming emotion. 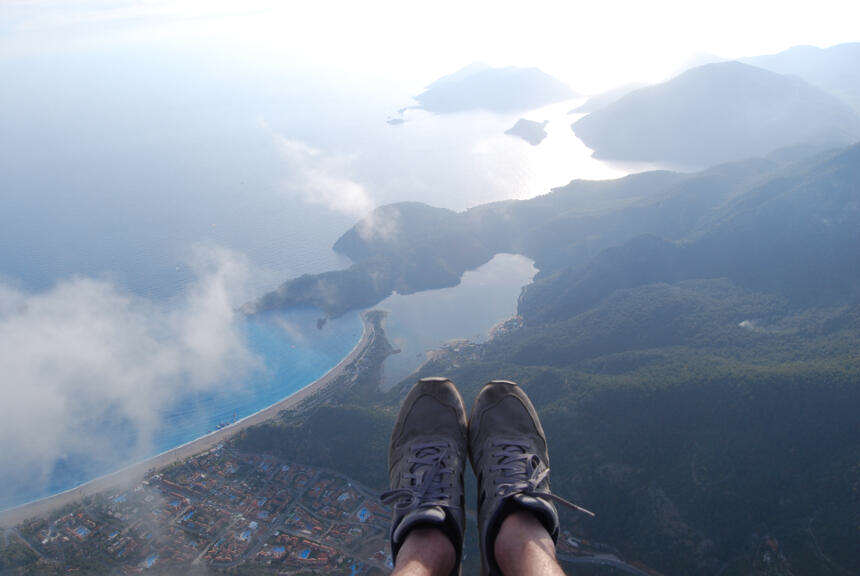 Above only the sky and the sun

I forget about the cold, all the tension is gone. There is only joy and amazement in my heart. In those moments even the soul lightens: fear, anxiety, sorrow, worries melt like snow in the sunlight. If men could fly, they would be much better beings, I say to myself. I take some pictures with my camera and the pilot does the same with his action camera.

There’s no photo or video that can convey this feeling though. Flying is a lucid dream. Your sight embraces the world, your soul expands and you feel part of the universe.

As we lose altitude the world below begins to take shape. I discern buildings, cars and people, as small as ants. I see the long, sand strip and the blue lagoon of Oludeniz, where less than two hours earlier I was swimming. The pilot asks me if I would like to do some acrobatics. “Why not? Let’s try!”. 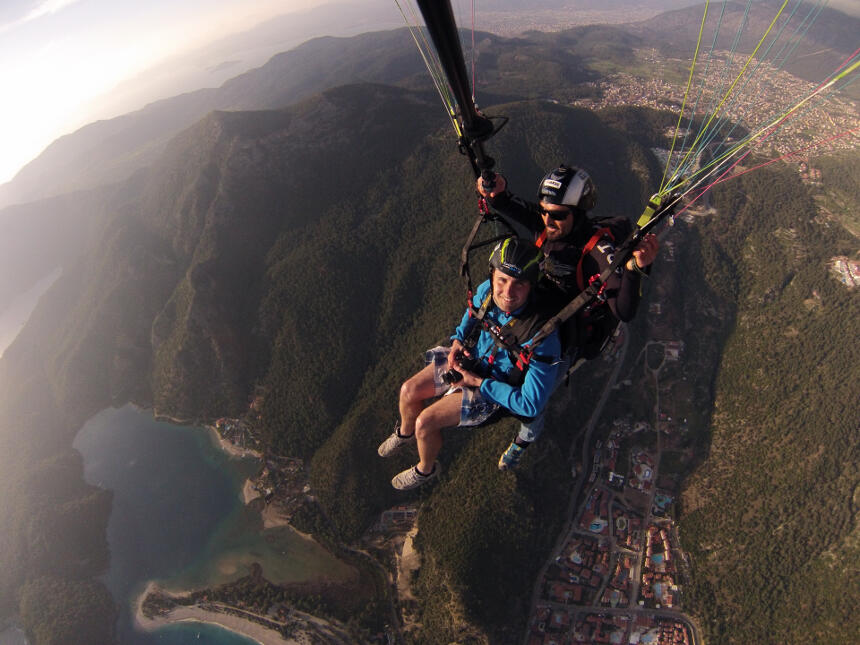 Flying is a lucid dream. Your sight embraces the world, your soul expands and you feel part of the universe

Suddenly we are spinning in the air at terrific speed. Everything turns around like on a carousel, I feel my heart pumping and my stomach rising in my throat. After this downward spiral, in thirty seconds we are quite close to the ground. We are about to land. As soon as we touch the ground, we keep running on the sand and slow down until we come to a full stop. Everything is exactly as I left it down here, except me.
ShareTweetDiggUpVoteSaveFlip
0 comment
0
FacebookTwitterEmail

Benefits of a Second Passport