Paris Under Fire: Witnessing Terrorism Strike the City | The Metro was closed, streets blockaded and most taxis not in service. Multiple fatal attacks had taken place across Paris, dozens of people were announced dead, hostages were being held—and the attacks were not over.

Last Friday, November 13, was tragic, and in the following days Paris has been haunted with somberness and an eerie sense of desolation.

The usual bustle of Parisians was gone over the weekend, and the cafés whose open doors and delicious aromas light up and electrify the city were closed. Avenues empty, gardens completely void of their usual crowds, and police at every corner.

A 20-year-old student originally from California, I have been living in the heart of Paris for four months now. I intern for a social-work organization that assists abused children and their families in rehabilitative and judicial processes. 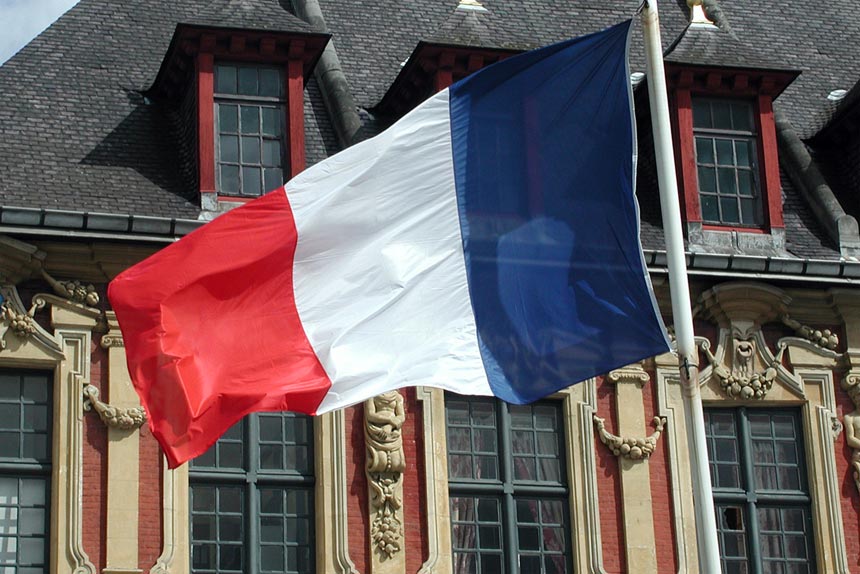 Living in this city has been a surreal experience for me—I’ve fallen in love with and learned an incredible amount about French culture and the Parisian way of life.

As with most tragedies, last Friday for me began beautifully, innocently. I slept in, drank my daily coconut milk and coffee in bed while I worked from home. Simultaneously sipping while half listening to various Ted Talks and rallying Innocence en Danger’s supporters on social media for my organization’s 15-year anniversary gala on Monday evening, which was subsequently cancelled. 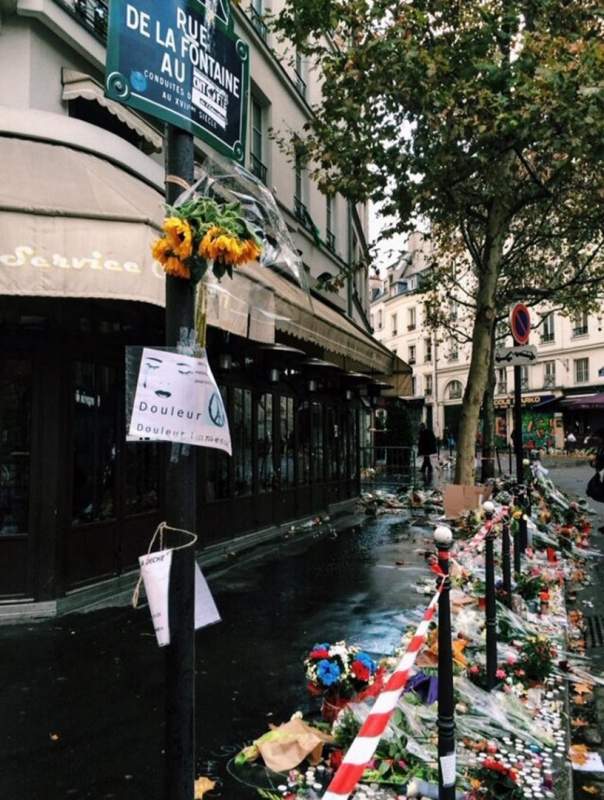 I made myself breakfast to Beach House’s smooth and comforting melodies, which I’ve fallen more in love with since attending their concert at a popular venue in Paris just a few weeks back—something I can’t help but continuously think back on as my heart aches for the concertgoers whose lives were taken on Friday.

I took my time getting dressed, applying my makeup and tidying up my studio as I danced, sang and enjoyed the day and my own company.

I had soaked up so many beautiful parts of Paris just the day before. I had visited the Pantheon, walked through the Latin Quarter, drank an espresso in the Luxembourg Gardens, and reposed for hours at Shakespeare and Co.’s newly opened vegan café that has a perfect vista of Notre Dame.

I had bought myself jewellery, treated myself to a strawberry crumble, and conversed with an elderly Parisian woman as she worked on a crossword puzzle and I coloured in the Buddha-themed colouring book I purchased at Musée Pompidou a day prior.

I took my time walking home along the Seine, taking a photo at every bridge I crossed, just as impressed with the view as I was the very first time I saw it. I enjoyed a glass of rosé as I bathed, blew my hair dry and took the Metro to St. Michel, where my date and I wandered the lively streets before settling on a small Italian restaurant for dinner.

Through our two courses and three-fourths of the way of our bottle of Bordeaux, both of our phones began ringing incessantly.

Everything happened all of a sudden; sirens blared as they whizzed past us, and everyone in the restaurant was immediately on their phone and comforting one another.

Within three minutes of Googling, we had all the answers we needed, and dreaded. Multiple fatal attacks had taken place across Paris, at the time 20 people were announced dead, hostages were being held and the attacks were not over. The Metro was closed, streets blockaded and most taxis not in service.

I had calls from friends and family in the U.S., Marseille and Paris. Both my landlord and boss texted to ensure I was safe. The city was in a panic, each desperate to get a grasp of where their loved ones were, make sure those they cared about were safe and aware of the dangers outside.

As we waited for the Uber we called to take us home, we both shook with fear. I’d never been afraid to be on a busy, central street before. When our driver arrived, he told us he couldn’t take us, since Uber was temporarily suspended. We convinced him that we’d pay in cash and he finally agreed to take us where we needed to go. 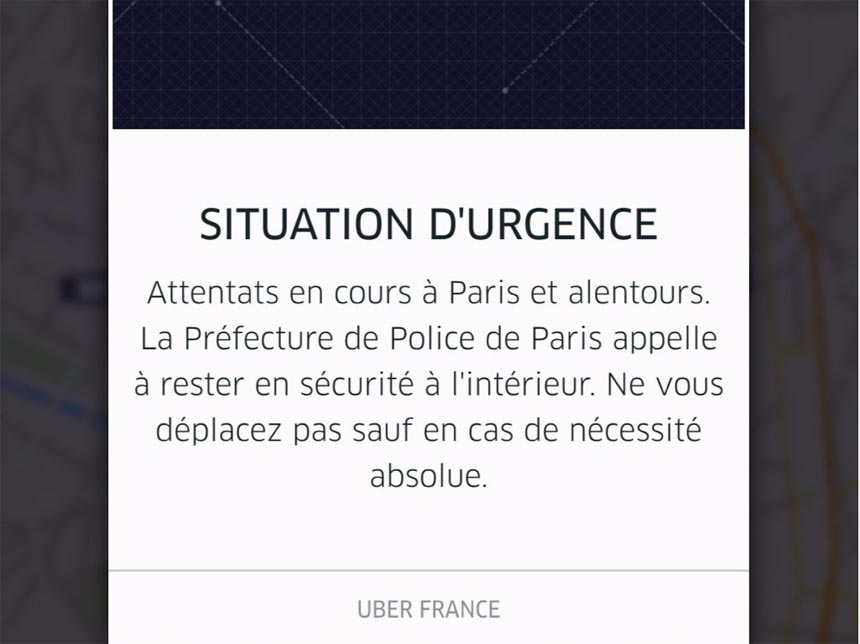 “Attacks are underway in Paris and its surroundings. The Prefecture of Police of Paris has asked that you stay safely inside. Do not travel unless absolutely necessary. Uber France.”

I told him where I lived, between the Louvre and Les Halles, and he told me it would be impossible to get me there, as there had been incidents reported at both locations and my street was on lockdown.

I was terrified. Home had never been unsafe, and being outside had never felt so exposing. Twelve long minutes later, I arrived at my friend’s house, where I hurried in and felt a wave of relief wash over me as the door shut with a loud and comforting click.

My friend’s apartment served as a place of refuge for 15 of us who’d found each other there, unable to get home, unwilling to go outside. We shared bottles of wine as we discussed religion and extremism, shared our stories of the night, and watched and read live updates from our phones and computers.

We checked ourselves into Safety Check on Facebook and reassured our families that physically, at least, we were free of harm. Mentally, we were distraught. The death toll rose to 100, and then higher, and news of the border being closed surfaced, as we watched President Obama deliver his speech of condolences and President Hollande declare the attacks, officially, as “acts of war.”

It wasn’t before 4 a.m. that we snuggled two to every bed, eventually falling asleep and escaping the surreal evening we’d just experienced.

When we awoke, it felt all the more real. More devastating details emerged as we reflected on how incredibly lucky we all were to have been safe, and away from the massacres that happened so close to us. My Metro ride home on Saturday morning was almost completely empty, the streets had nobody on them; almost every store I passed was gated shut.

What I keep reminding myself is that as terrorizing as these acts have been, and how heartbroken the city feels, the solidarity I see and feel around me is uplifting. The swiftness that Parisians and her allies have been in consoling victims, offering assistance and encouraging strength is beautiful to witness, and I’m focusing on that.

Paris, this beloved city, still stands, will not lose its joy of living, its spirit, its love and its freedom. We cannot hide from these terrible acts, we can honour the period of mourning; but we must rebuild, and we must be strong.

As our patriotism soars and our love for France pulses, we must be incredibly careful in not allowing our pain to lead us to easy answers of blame. No religion is responsible for these acts, let us not fight hate with hate.

As I sit writing in this café, I overhear countless conversations about Friday’s events; people are sharing facts, consoling each other, and healing together.

Paris has been devastated and will bear the scar of this tragedy forever, though true to its name, the city of love has already begun rebuilding exactly as one would expect—through its core values of liberté, égalité and fraternité.

Creepiest Places in the World | Part 2