In Praise of Arizona | Exploring the American Southwest

The endless deserts and skies and canyons of this stunning Southwest American state are a boundless playground of beauty and culture and history.

Story and Photos by Paul Auerbach

The endless deserts and skies and canyons of this stunning southwest state are a boundless playground. I came to read Dorothy Hughes’s novel The Expendable Man when I found it among some musty Sgt. Rock comic books in my grandparents’ basement half a lifetime ago. I was 10 or 11 years old, and already being raised on a steady diet of westerns and war movies (though my folks had other ideas), and the wide open spaces of the American West always tugged more incessantly than the sands of Iwo Jima.

Hughes’s descriptions of the spaces between Los Angeles and Phoenix stirred my imagination as much as the murder mystery set there, in that vastness where one can’t help but feel expendable.

It would be many years before I got there, but when I finally did, the clean, still air and the incalculable volume of light and sky made a deep impression on me. That was before the era of digital photography, and the memories are still vivid without a folder full of jpegs to help me. So when I had the opportunity to get back to the desert last year and spend time exploring some of its lesser known canyons, I jumped at the chance.

Arriving in Phoenix in early October for a Canadian is like taking a jolt of caffeine just before bed: your body is slowing down and getting used to the low light and cold, and all of a sudden there is crisp air and sunshine and motion and white teeth everywhere.

My friends and I were scooped up by Gary of Arizona Outback Adventures and headed north, through Tonto National Forest and in the direction of Sedona. The air gets cooler as we head north, away from Phoenix and the desert, and before long we are passing through pine forests of surprising height, set against the brilliant blue sky of a flawless Arizona day. 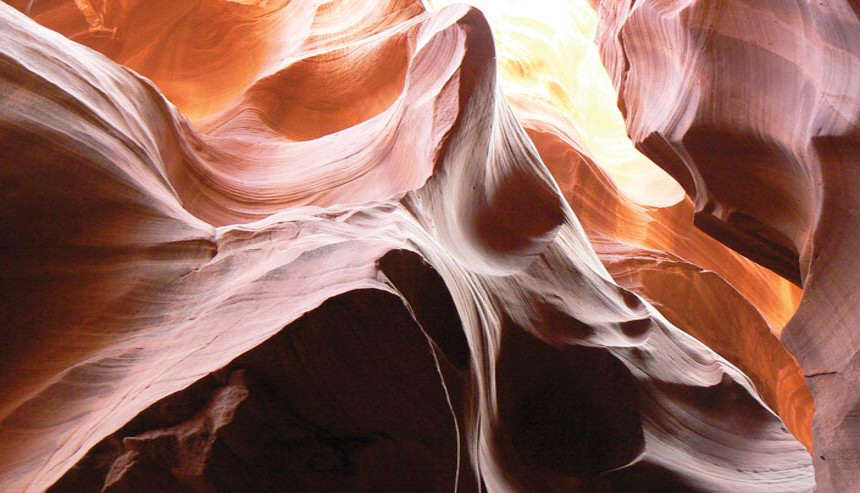 Sandstone carvings by wind and water in Secret Canyon

North of Flagstaff, the traffic dwindled to almost nothing, as the motor homes and packs of dentists on Harleys headed west to the Grand Canyon. Instead, we pressed on towards Tuba City, 80 miles to the north, a Navajo town of just more than 8,000. We arrived in Tuba City late, but just in time to see a blazing orange sunset over neon signs set against the deep blue of the receding daytime sky. There are Hopi Indians in Tuba as well, and traditional Hopi communities such as Moenkopi are a short drive away and well worth visiting. People mostly drive trucks and are friendly, but not voluble.

By mid-morning we are well east of Tuba City, and hiking in Coal Mine Canyon, a lesser known (and totally unmarked) destination. The canyon is located on the border between the Hopi and Navajo Indian Nations, on the edge of the vast Painted Desert of northeast Arizona. A quick calculation confirms that if I were to walk northeast I would not see so much as a dirt road for at least 50 miles (that’s 80 kilometres to you and me).

The stillness is beyond description, as are the colours and formations of the sharply cut contours of the eroded sandstone. Our Hopi guide, James Surveyor, tells us his people have lived in these lands for more than a thousand years.

“Some people see nothing when they come here,” he says, “but to us it’s our home and it’s beautiful.” It occurs to me that if you want to understand anything, stillness is required.

And it turns out that the best part of hiking these canyons is stopping and standing still, listening to the wind swirl through and around them, sounding altogether too much like murmuring voices.

This is a place to pitch a tent and do nothing; a place where it’s enough just to be. By the next morning we’re on our way north again, towards Lake Powell, which lies mostly within Utah and is really a huge reservoir on the Colorado River. The lake is big enough for rented houseboats the size of barges, and for kayakers in search of the stillness and quiet offered by slot canyons; narrow grooves cut in the sandstone by water that can measure three feet wide, and as much as a hundred feet deep. 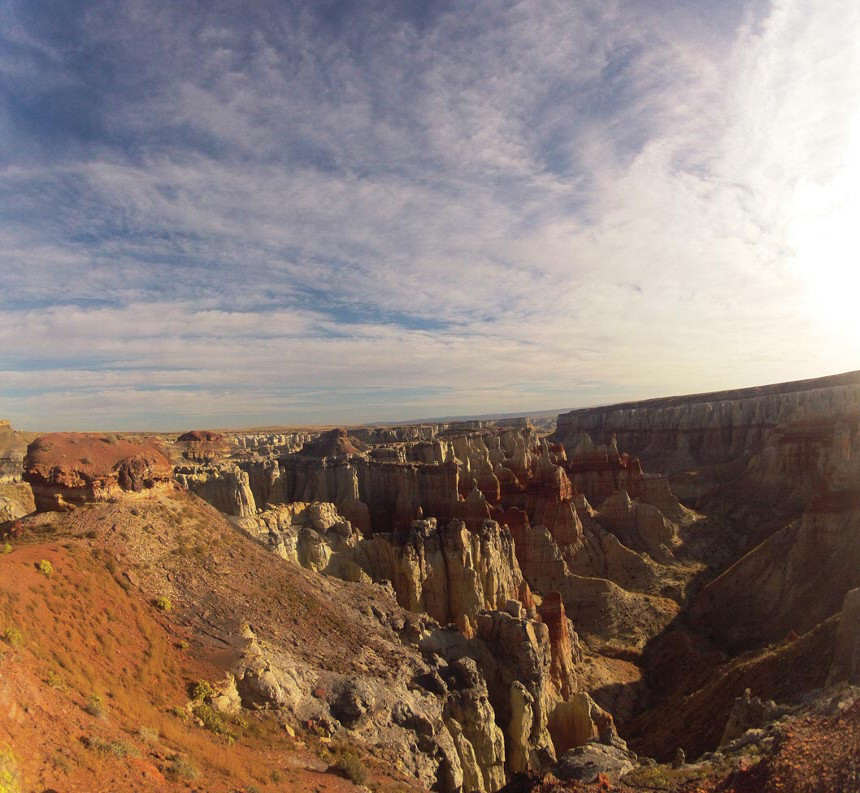 The author stops to look back at the expansive of Marble Canyon.

We paddle on pristine water in the direction of Tower Butte, which rises like something from Krypton, hundreds of feet above the desert floor, and make our way up narrower and narrower canyons, before landing on a small beach. The sandstone is millions of years old, and is soft and cool to the touch. From the water we move up the canyon, which gets still narrower and deeper, until even the most robust among us starts to feel claustrophobic.

All of us are aware that sudden downpours have sent water careening through canyons like these and drowned hikers in the past. Still, we trust in the forecast and push on until we reach the end, where there is no way of going up (too steep and too smooth), and no way to go forward.

Paddling toward the Butte

Near Page, Arizona, we had targeted a place called Secret Canyon, which is hard to get to but well worth it if you can. We set out the next morning in Hummers (I want to believe they were running on bio-diesel) across Navajo land that was steep and dry and forbidding. If there was any water anywhere in sight you’d have to bite a cactus to get it.

After about 40 minutes of pitch and yaw in the air-conditioned comfort of our rolling command centres we were dumped into the unforgiving wilderness of the desert. We hiked on a trail that was alternately sandy and rocky for a while, gazing up at the steep rocky hills on either side. Secret Canyon is smaller and narrower than the more famous Antelope Canyon, but the absence of other hikers made it all the more special. In the deeper parts of the canyon, it feels like being in the middle of a great, polished Bill Reid sculpture made of sanded and polished cedar; the colours and contours are that extraordinary.

Only a couple of days later we finished off our trip with a full-day hike down El Capitan Canyon, a beautiful slot canyon that’s about a 90-minute drive east of Phoenix. Although it isn’t technically demanding, the narrows are beautiful and we did five rappels to get down the steeper sections. 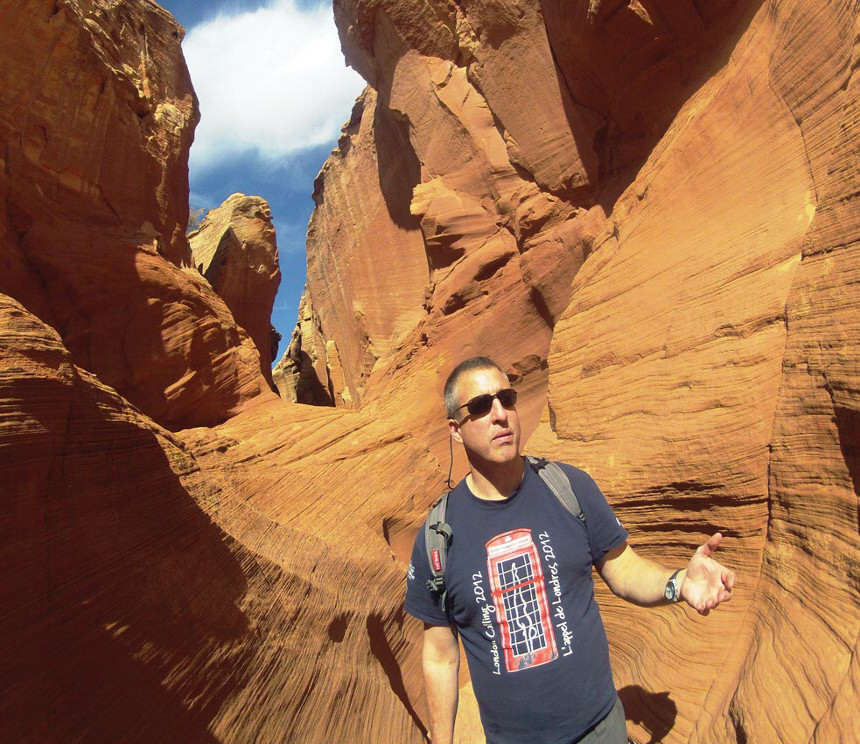 The author at the twisting wall in the Secret Canyon

If  you haven’t tried canyoning this is a great place to start—with someone who knows how to rappel, of course! The canyon was dry when we were there, and I can imagine it being a lot more challenging with water running over those boulders. Toward the end of the day we climbed out of the bottom of the canyon toward Route 77, just in time to watch the sun set over El Capitan mountain.

My friend Suzanne took a seat on the edge after the climb, and gazed over a range of low mountains and the orange ball shimmering in the distance. She’d been to Arizona before, and had lived in the country north of Phoenix for a time. “It always makes me more reflective,” she said. She was very still, and it seemed to me that she understood something about Arizona I was only beginning to glimpse.♦

Paul is Outpost's gear editor and a senior writer. A seasoned expeditioner, he often writes features long and short for Outpost Magazine.

Egypt | Is This the Place Where It All Began?