The Only U.S. Tropical Rainforest with National Forest Status is Devastated, and No One Knows

The only tropical rainforest in the US National Forest System was hit hard by Hurricane Maria in 2017. Now crews are working to restore the forest in Puerto Rico, and relief organizations are bringing hope to the people. One Canadian volunteer joined in the effort and reports on its progress for Outpost.

Our Sundays in Puerto Rico were always sacred. After another physically-intensive week, our day off meant loading up a mini van (guagua) full of excited (and exhausted) disaster relief volunteers, fuelling up on empanadas at a local bakery, cranking up the reggaeton beats, and going on a field trip to El Yunque—the only tropical rainforest that’s part of the United States National Forest System.

Revered by the Taíno indigenous people for thousands of years (they left their mark with petroglyphic carvings), El Yunque was protected in 1876 under Spanish rule, making it one of the oldest reserves in the western hemisphere.

Part of the United States forest system since 1907, it’s one of their smallest areas (just under 30,000 acres) but one of the most biodiverse, with approximately 240 species of trees (23 being unique to El Yunque), approximately 50 bird species and countless animal species, including bats and coquis (onomatopoeiacally-named tree frogs that are a symbol of Puerto Rico). The forest’s streams supply 20 percent of Puerto Rico with drinking water.

But the forest was greatly devastated during Hurricane Maria (Puerto Rico’s worst natural disaster on record, a near Category 5 hurricane that struck the island in September 2017). The storm ravished trees, stripped those standing of moss (essential for water collection) and resulted in a loss of canopy. 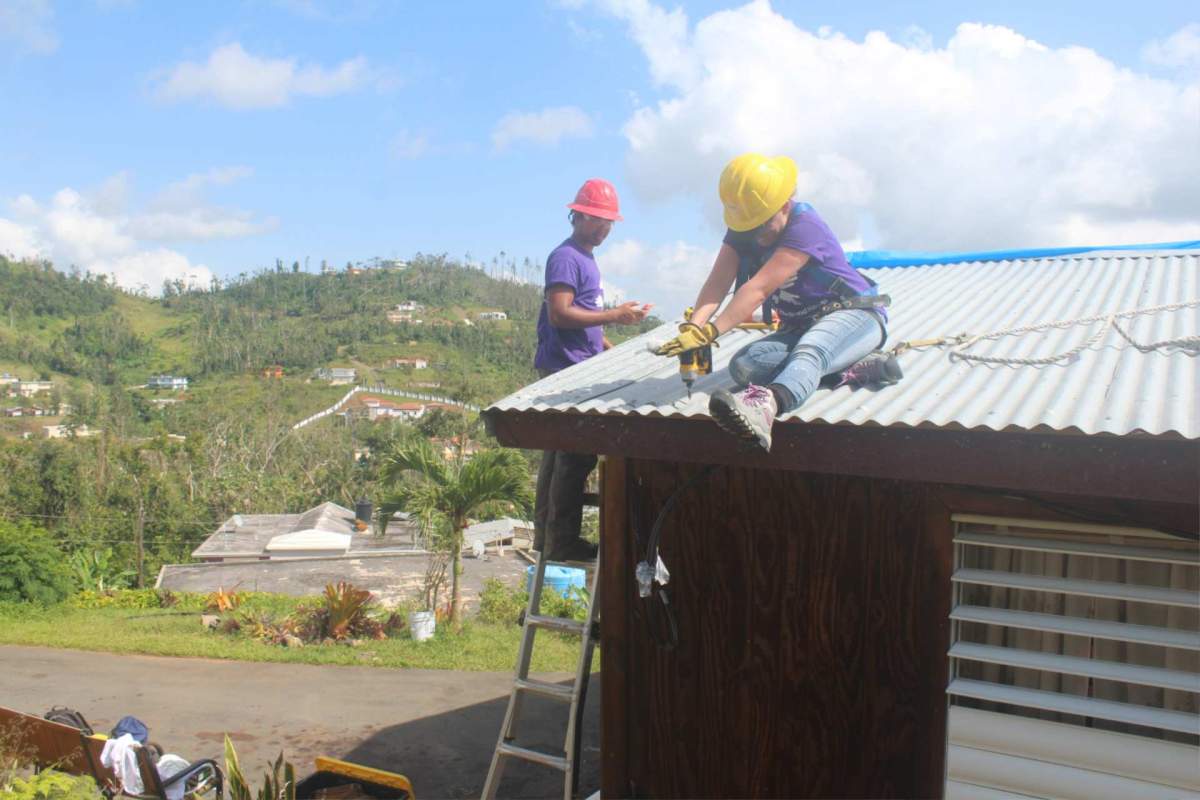 Melody, a volunteer with All Hands and Hearts, installs a roof in Puerto Rico

The forest’s flora and fauna were severely affected, leading to an overall population decline, including that of the endangered Puerto Rican parrot. A few weeks ago, I travelled to the hard-hit central mountain town of Barranquitas to volunteer with All Hands and Hearts, a volunteer-powered organization helping disaster-stricken areas since the 2004 tsunami in Southeast Asia. 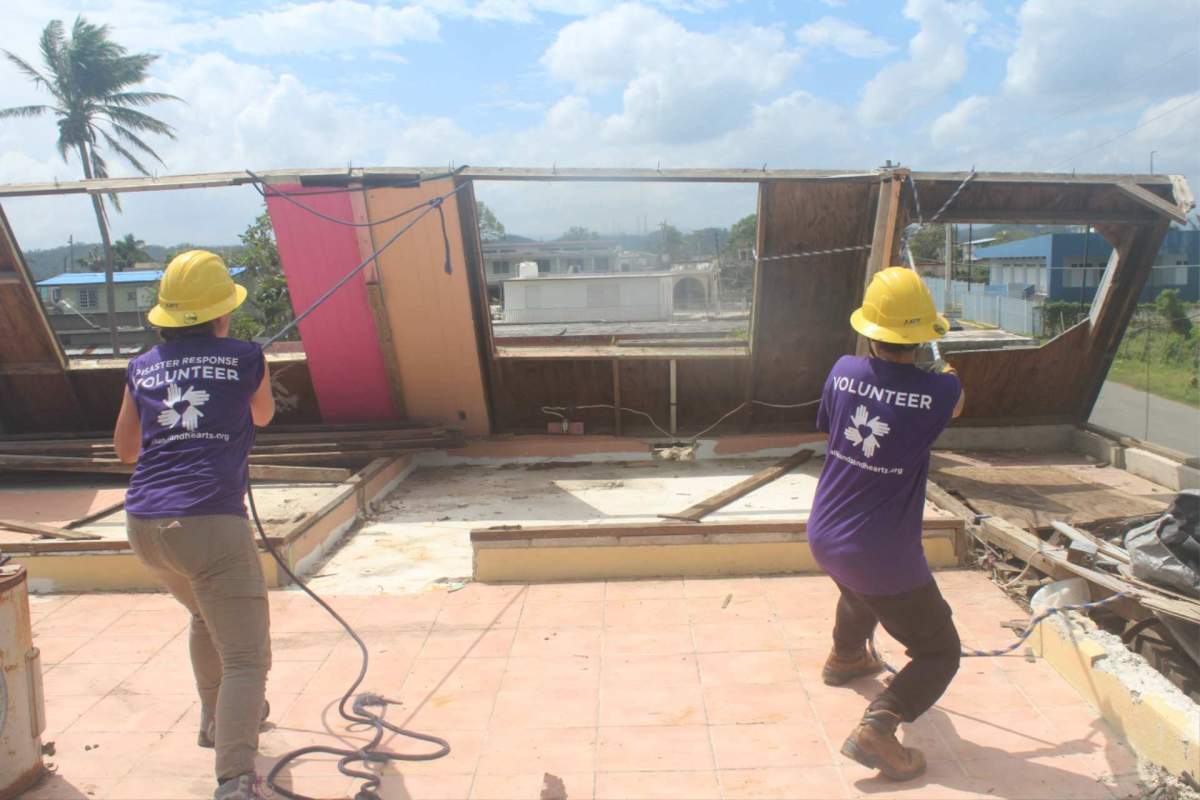 Our writer-volunteer, Carla Bragagnini, is on the right.

Through donated funds, they provide Puerto Rican homeowners with materials free of charge, as well as volunteer labour and tool usage to remove trees and debris, deconstruct structures, build roofs, patch leaks and sanitize mold in the aftermath of Maria. 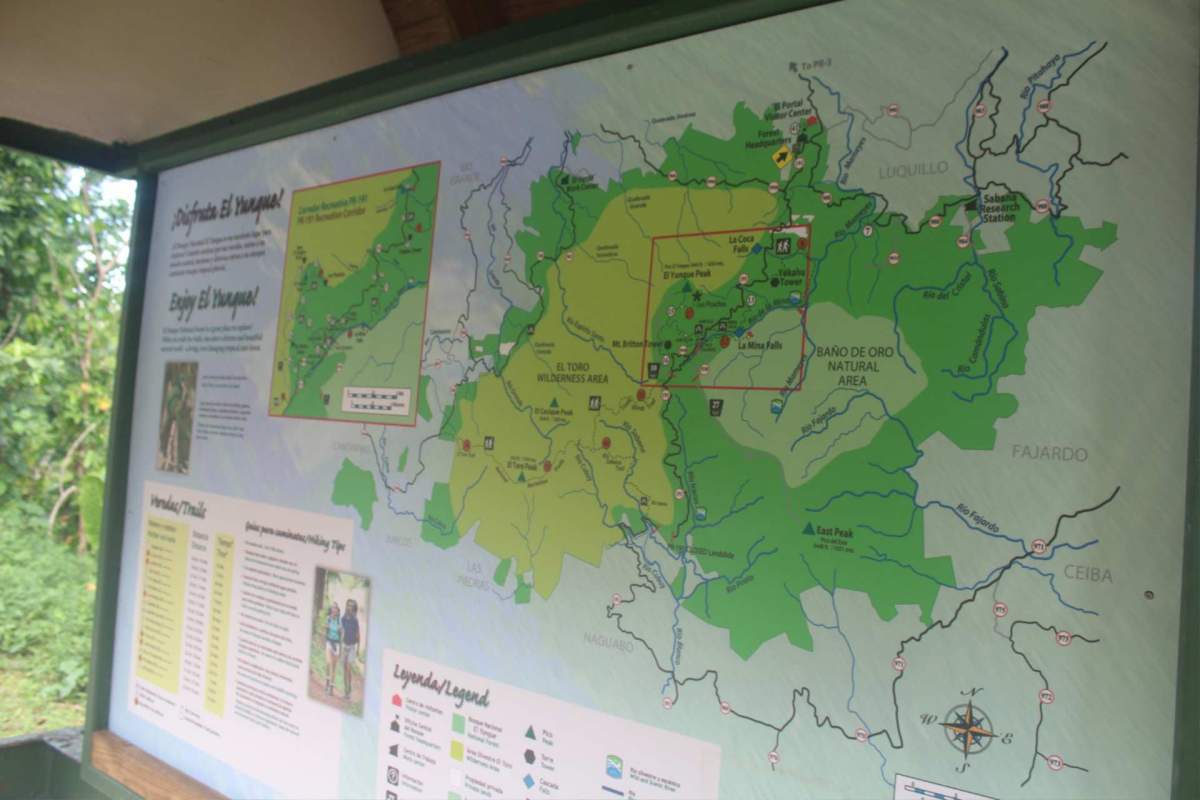 Map of El Yunque National Park, the only tropical rainforest in the US National Forest System

On the way from the airport to the volunteer base camp, I saw thin forests that I could tell were once lush and full (according to estimates, approximately 60 percent of the island is forest-covered).

“So many trees and utility poles fell and there were landslides everywhere,” the taxi driver, Jose, told me. He said the storm wreaked havoc in the area for 15 gruelling hours. In the following days, people took matters into their own hands. “They went out there themselves with machetes and chainsaws to help clear the roads,” he said. “Life had to go on.” 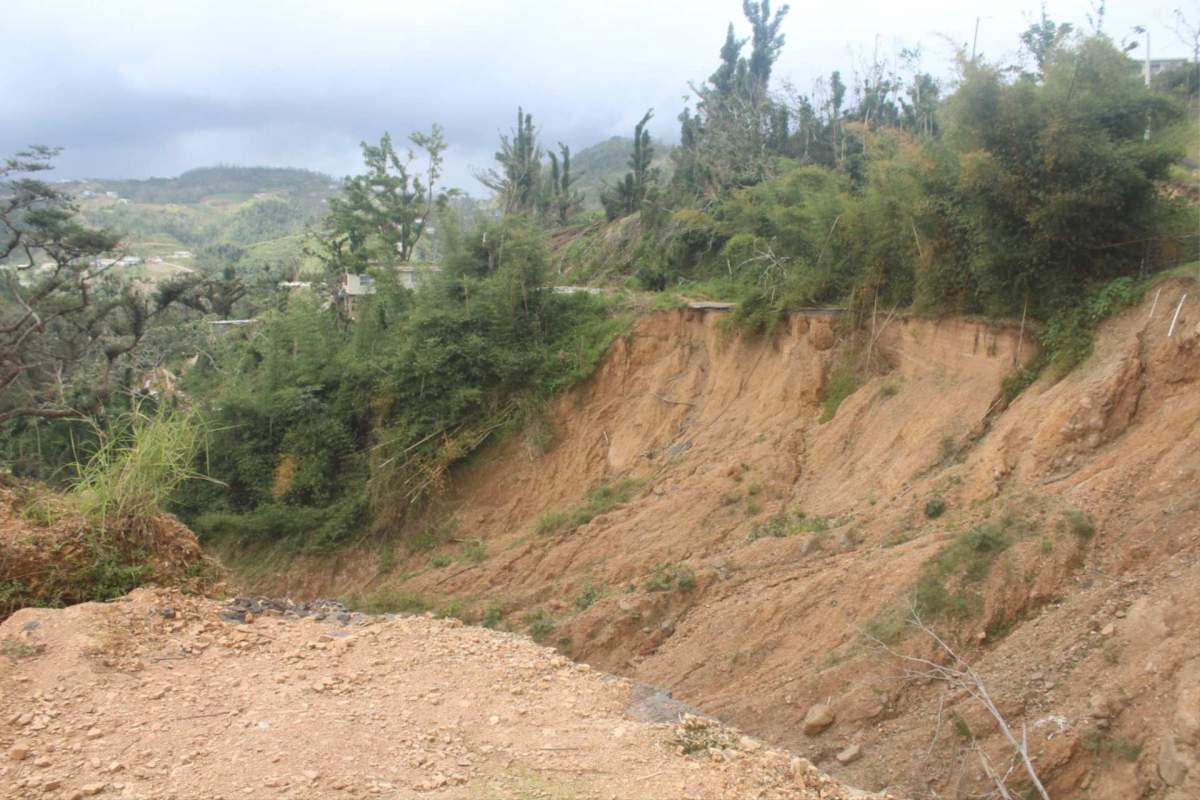 This used to be Highway 143 of Puerto Rico

But others remained cut off from the world for weeks, unable to communicate or receive assistance. Melody, our resident Puerto Rican-Cuban volunteer, was the one spearheading our mission to El Yunque. “I want to see it, but I’m afraid of what it looks like now,” she said, recalling her pre-Maria visits. We asked around and looked online, but couldn’t find any current updates.

Upon arrival, our fears were realized—most of the forest was closed. Besides knocking down trees, the hurricane damaged the visitor centre and caused mudslides that blocked roads and hiking trails. Crews are working in debris removal and restorations, but during our visit, only one out of nine hiking trails and one waterfall, which we visited briefly, are open to the public. 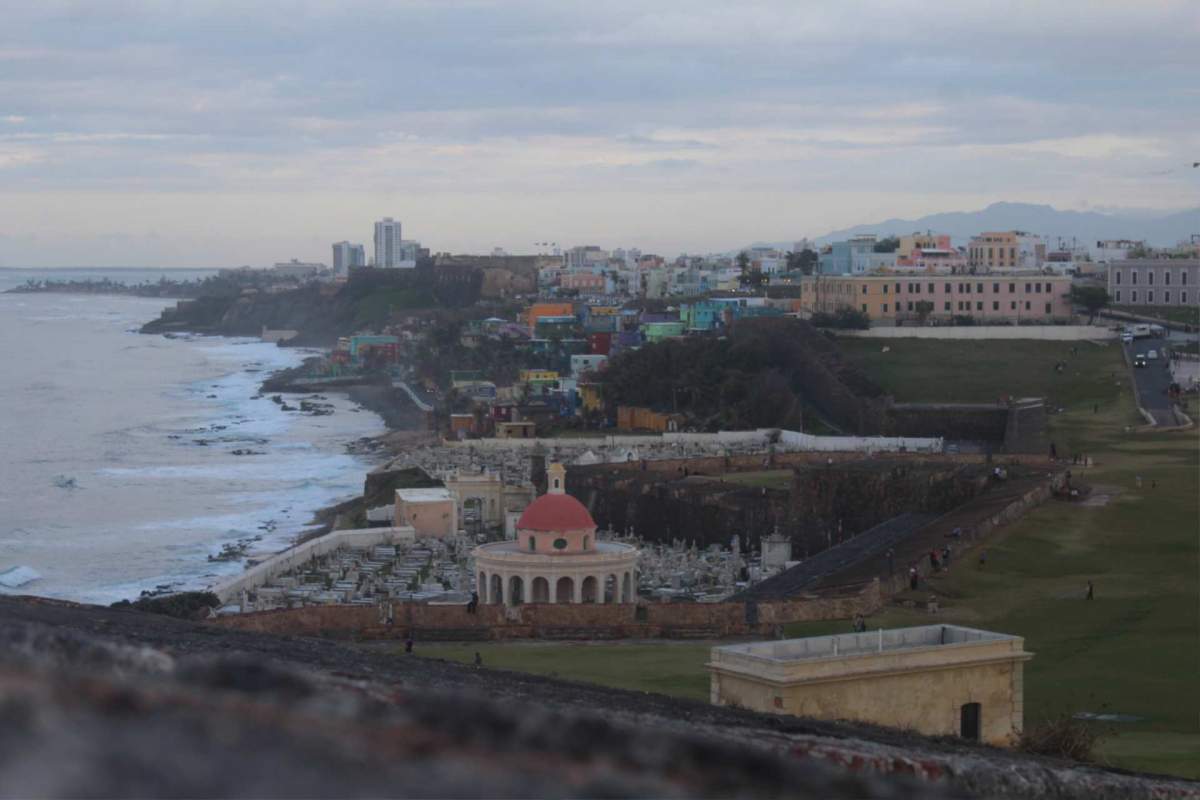 In spite of its adversity, Puerto Rico is stunning. Besides boasting the national forest, it has world-class beaches, surf breaks, bioluminescent bays, and an enchanting and historic Old Town in San Juan. The culture is rich and vibrant and the cuisine is tasty—a fusion of Caribbean and Spanish flavours. The infrastructure is up and running in tourist areas, but the industry is suffering. 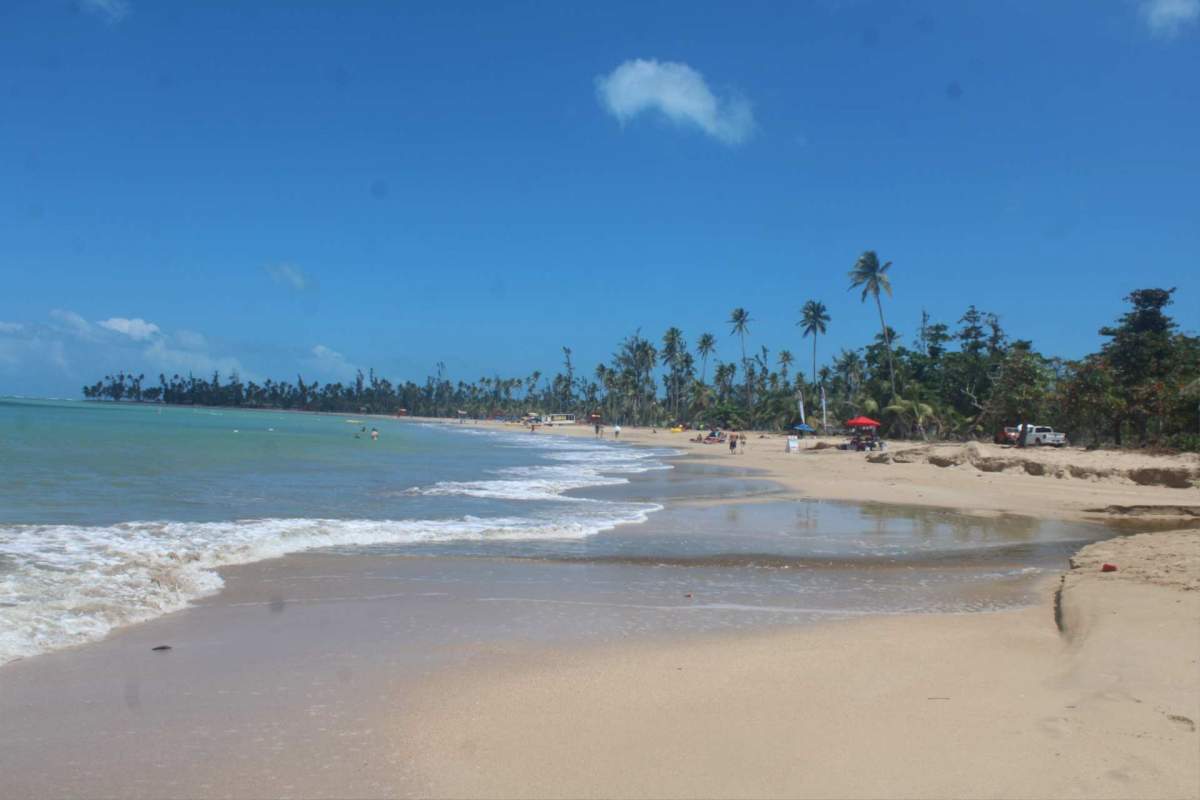 Puerto Rico’s world-class white-sand beaches are open for tourism and welcoming travellers back!

While you can see the damage in forests and rural areas, the colourful streets of Old San Juan look almost unscathed (about 50 kilometres away, it became our Plan B for the afternoon). It’s characterized by two imposing forts and city walls that were built by the Spanish, who held power over this strategically-positioned island for centuries until the United States took control in 1898. 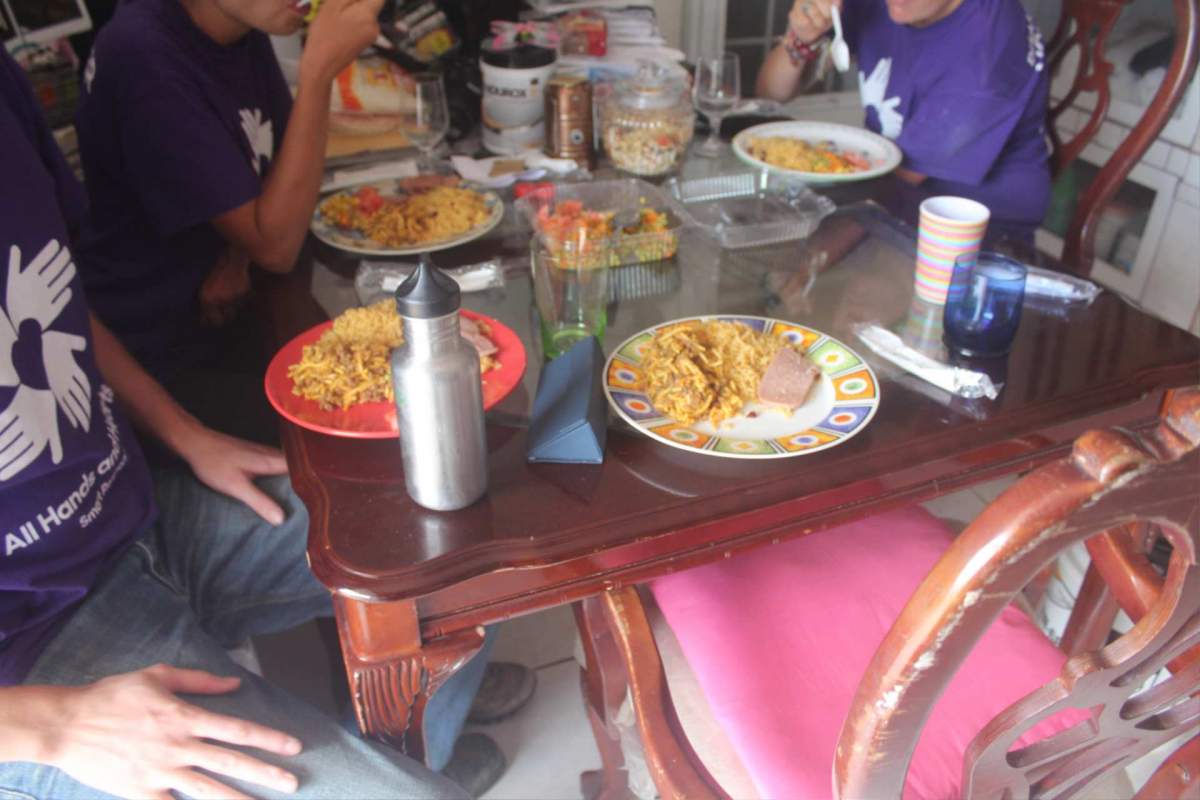 Nothing stops Puerto Rican hospitality, not even hurricanes

These days, the laidback district is known as the birthplace of the piña colada, and a popular stop on the cruise circuit. Even though we knew that tourism dollars help boost the economy, coffee tasting and window shopping through the narrow streets of San Juan, we couldn’t help but feel the stark contrast to conditions we’d seen as relief volunteers. 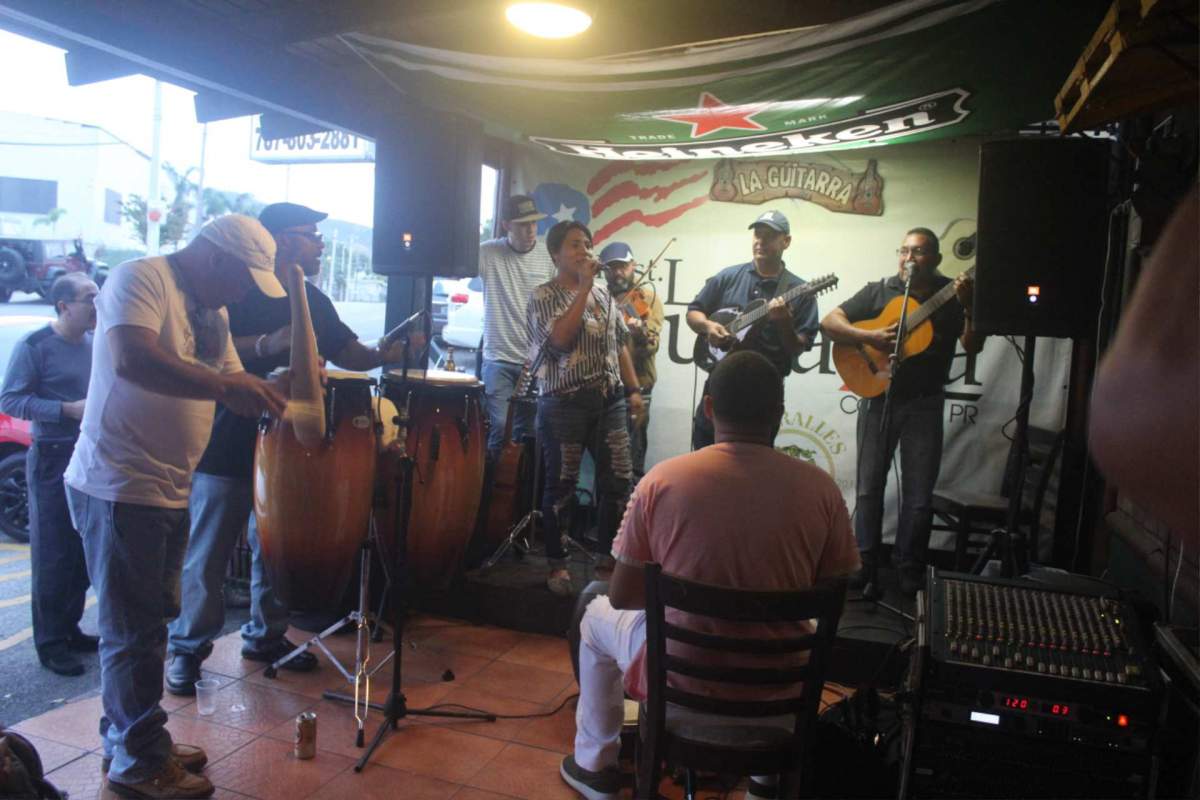 Life on the island is always vibrant 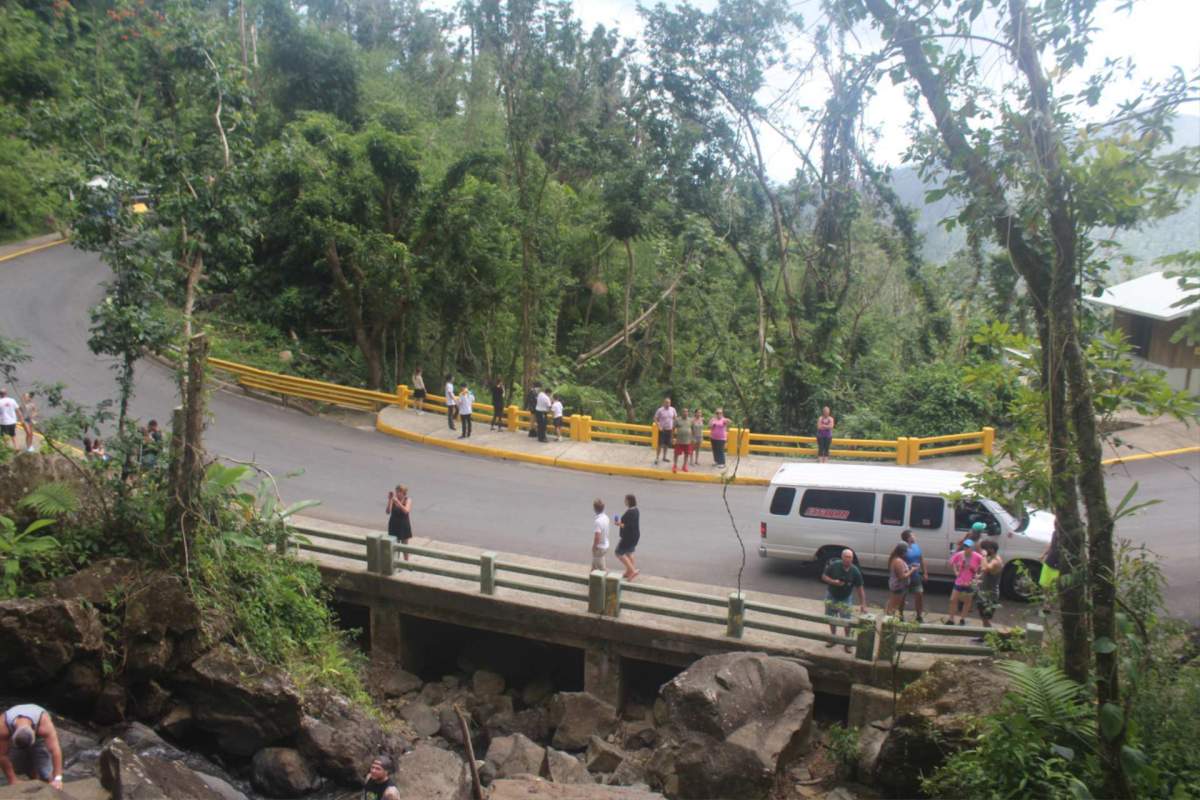 Driving in El Yunque National Park, Puerto RicoOutside of tourist areas, the reality is people have received very little aid so far. In Puerto Rico, having home ownership documents is rare, so it’s hard for people to even qualify. Materials are difficult to source on the island, and when stocked, lumber in hardware stores is often moldy. The tarps on homes have a life-span of about 30 days, but are still being used months later, having lost most of their water resistance. Even though utilities teams are working around the clock, many homeowners I talked to rely on generators, as they still don’t have electricity. 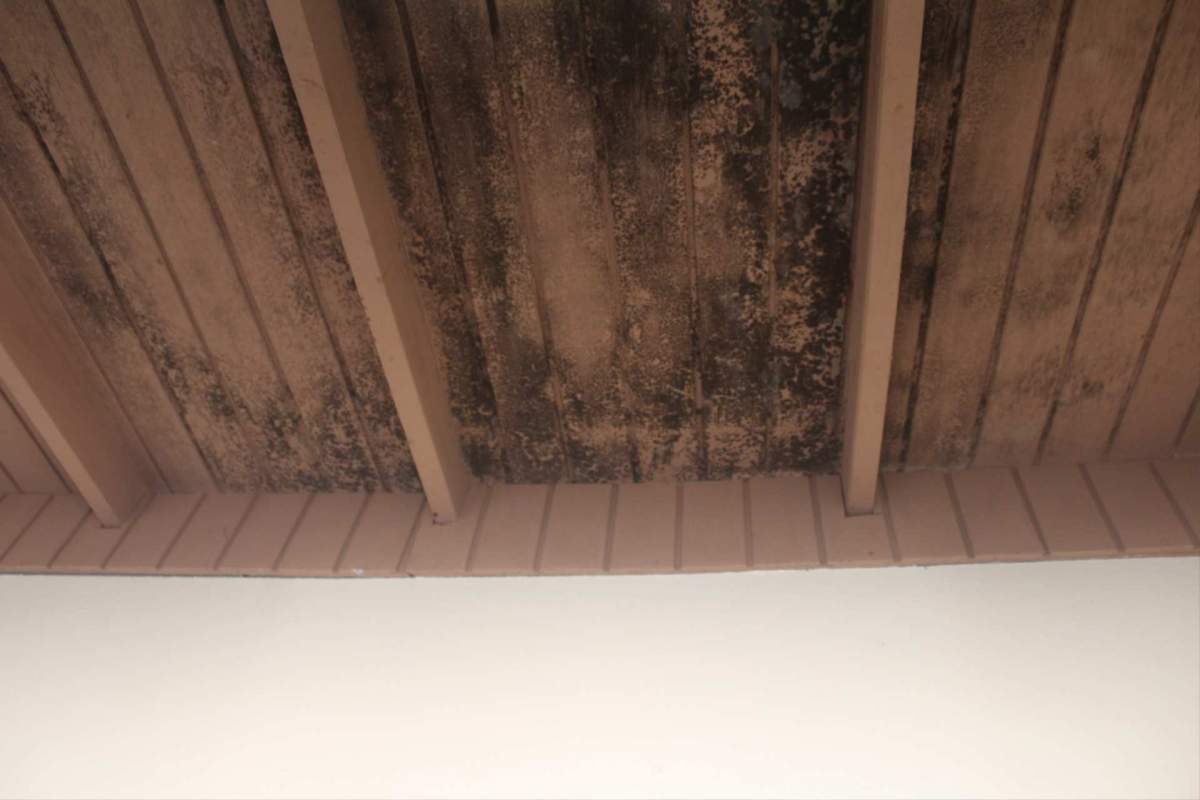 On one tarp removal and roof replacement site, Carlos, the charming homeowner, served us cold soft drinks out of a cooler with store-bought ice (having no electricity hardly derails Puerto Rican hospitality). He pointed to the valley below, where his grandparents were working in the fields.

“All of their crops were gone, so they had to start over,” he told us. With agriculture affected, buying bananas, for example, a once common staple, is nearly impossible these days. At a nearby shop, bananas sell out when in stock—a bargain at one dollar a piece. In the community, with little funding and hurricane season fast approaching, damaged homes are vacant, people live in tight quarters with relatives, and the constant rain and leaks create mold that make people ill, including Carlos’s little girl. 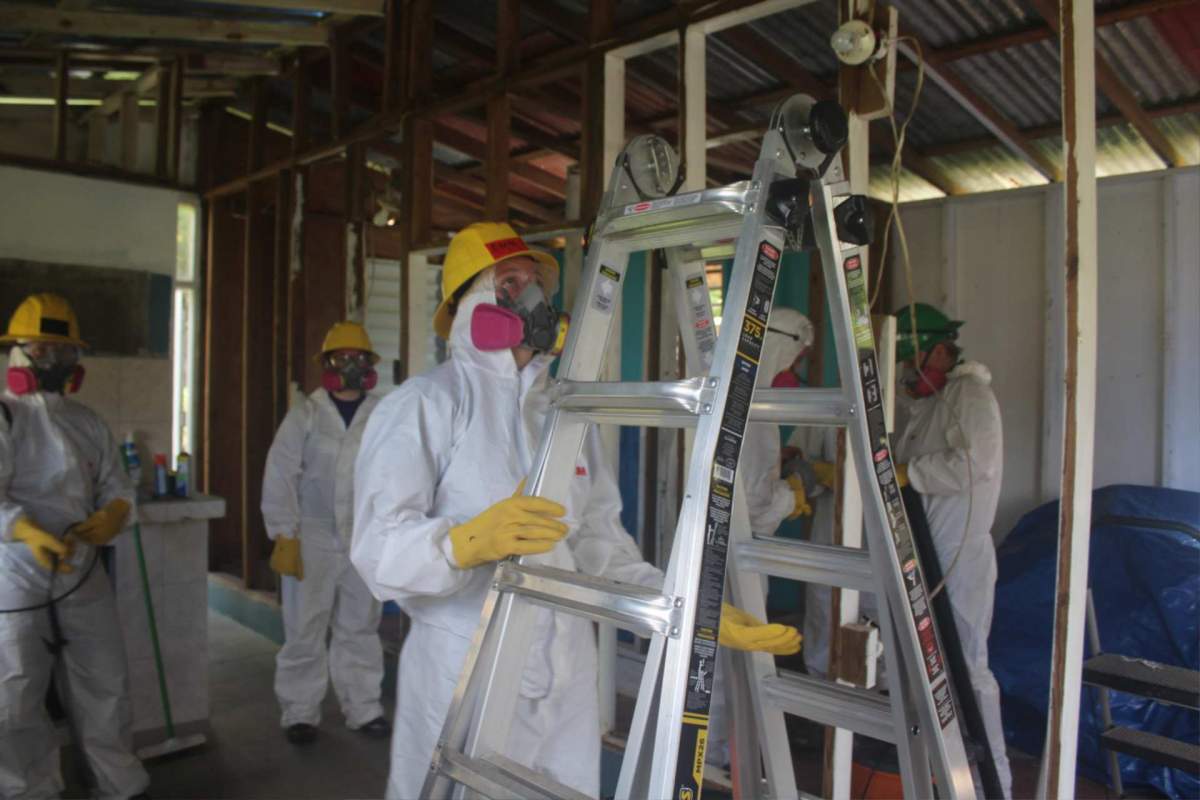 Mold inspectors, who are volunteers

“We are lucky. We may not have electricity or running water, but we have everything we need,” Carlos says genuinely. Everyone I’ve talked to is grateful for what they have. They keep moving forward and never focus on what they’re missing. Puerto Rico puts things into perspective. 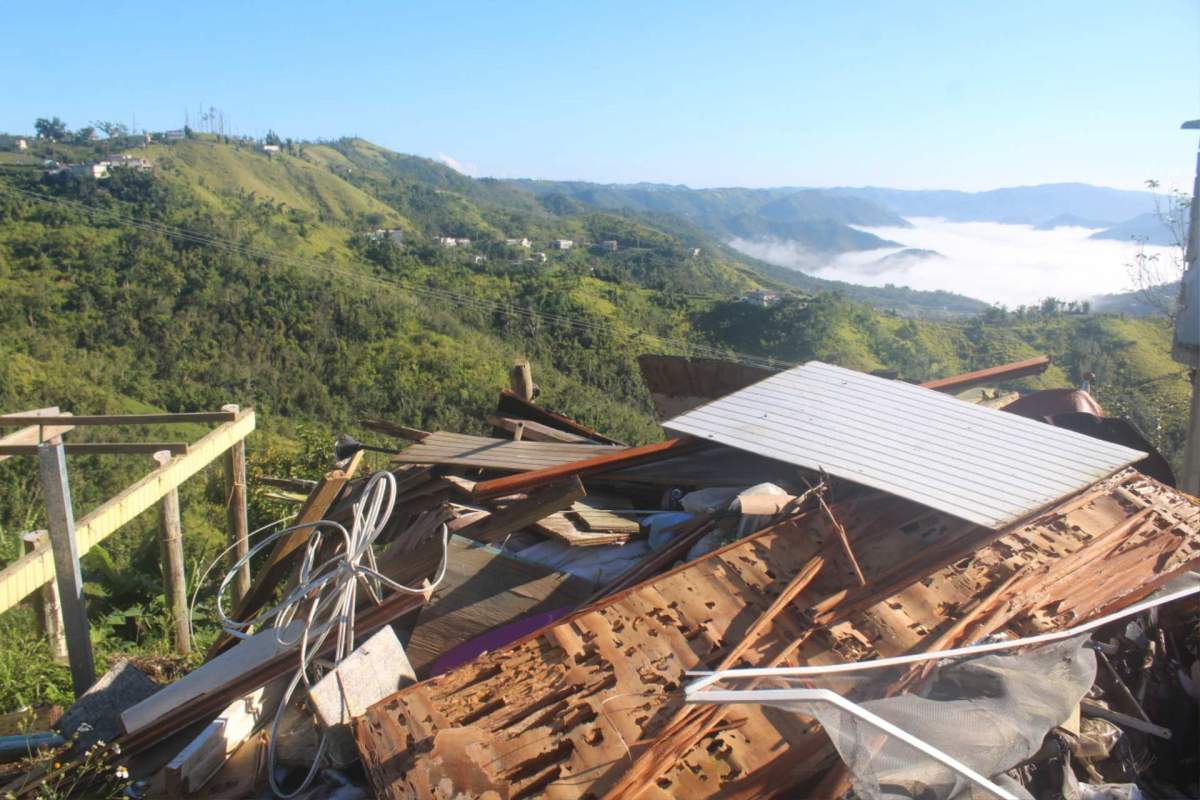 The island needs tourism dollars now more than ever. With many tourist spots up and running already, El Yunque may be one of the few that takes years to fully recover. But as we explored the forest’s only open waterfall—the breathtaking 26-metre-tall Coca Falls—before heading to San Juan, I saw green foliage returning to surviving trees, and even some flowers and seedlings starting to grow.

Even though the progress is slow, it’s moving along. And perhaps that’s the biggest lesson of all: that nature is incredibly resilient, and so is the human spirit. **

All Hands and Hearts Smart Response is a volunteer-powered disaster relief organization with hurricane response and recovery operations in the central mountains of Barranquitas and the seaside community of Yabucoa in Puerto Rico. They also have several other active projects around the world, including the Virgin Islands, Dominica, Mexico and Texas. On the island since January 15, 2018, they have logged 24,595 volunteer hours, completed 247 jobs, and touched 1,890 lives in Puerto Rico.