I Set Foot on a Brand-New Island Before Anyone Else

When an undersea volcanic eruption created a brand-new island in the South Pacific, Angry Planet host George Kourounis knew he had to go. That’s when everything started to go wrong.

Sometimes I feel like I was born either too late or too soon to experience a true golden age of exploration. Too late to discover new lands, too soon to visit other planets.

We’ve just barely begun to travel in space, exploring the solar system beyond Earth. The farthest any human has ever been is our own moon, and it will still be quite a few years before we boldly go further and set foot on Mars.

With seven billion people on this little planet, it is getting harder to find untouched wilderness. There are no new continents to discover, no mysteries on the horizon. With GPS and mapping satellites, we can get incredibly detailed information about nearly every nook and cranny of this third rock from the sun. There are, quite simply, no new places for serious explorers to discover.

While on assignment in New Zealand, filming an episode of the Angry Planet TV series, something very rare happened, something that immediately caught my attention. An undersea volcanic eruption near the island nation of Tonga had broken the surface of the ocean and was in the process of creating a brand new island. 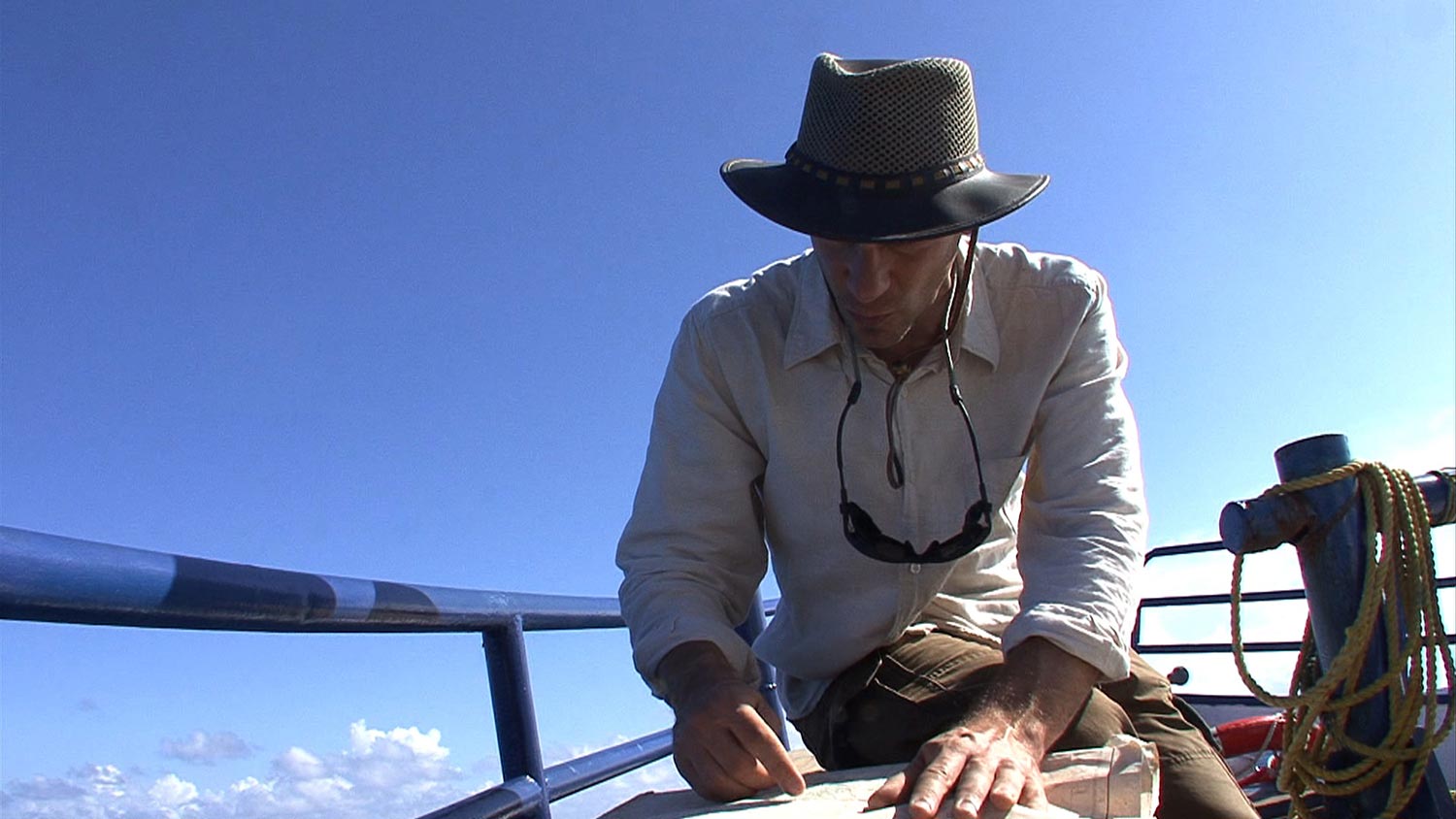 As soon as I saw the news, I knew I had to try and set foot on this the newest land on our planet. An opportunity like that doesn’t come often, so we had to act fast.

We dropped all our New Zealand filming plans and started to figure out how to get to the island—but, there were a few obstacles in the way.

The first challenge was tropical storm Lin, which was working its way through the Tongan island chain. Normally, this would have been inviting since I’ve also spent 15 years as a storm chaser who often goes to great effort to geOceania, t inside these types of storms; but with Lin moving through, there would be no way of getting a boat out to the volcano. We had to wait it out in New Zealand for a few more days and let the storm pass.

Eventually, the tropical storm passed, and we hopped a plane from Auckland to Nuku‘alofa, the capital of Tonga, arriving in the middle of the night. We’d managed to charter a small fishing boat with a skipper who was brave enough to take us out to the new island—but as we started making our way out to sea, things took a rapid downward turn. They say that getting there is half the fun, but there was not much fun to be had on this voyage.

One of the boat’s engines failed, and that more than doubled our travel time. What was supposed to be a four-hour trip turned into more than 10 hours on the open, very rough Pacific Ocean. Behind us we were towing a smaller boat with an outboard motor that we planned on using to get ashore on the volcano. It could also serve as a life raft in the ever-increasingly likely scenario that we go under. 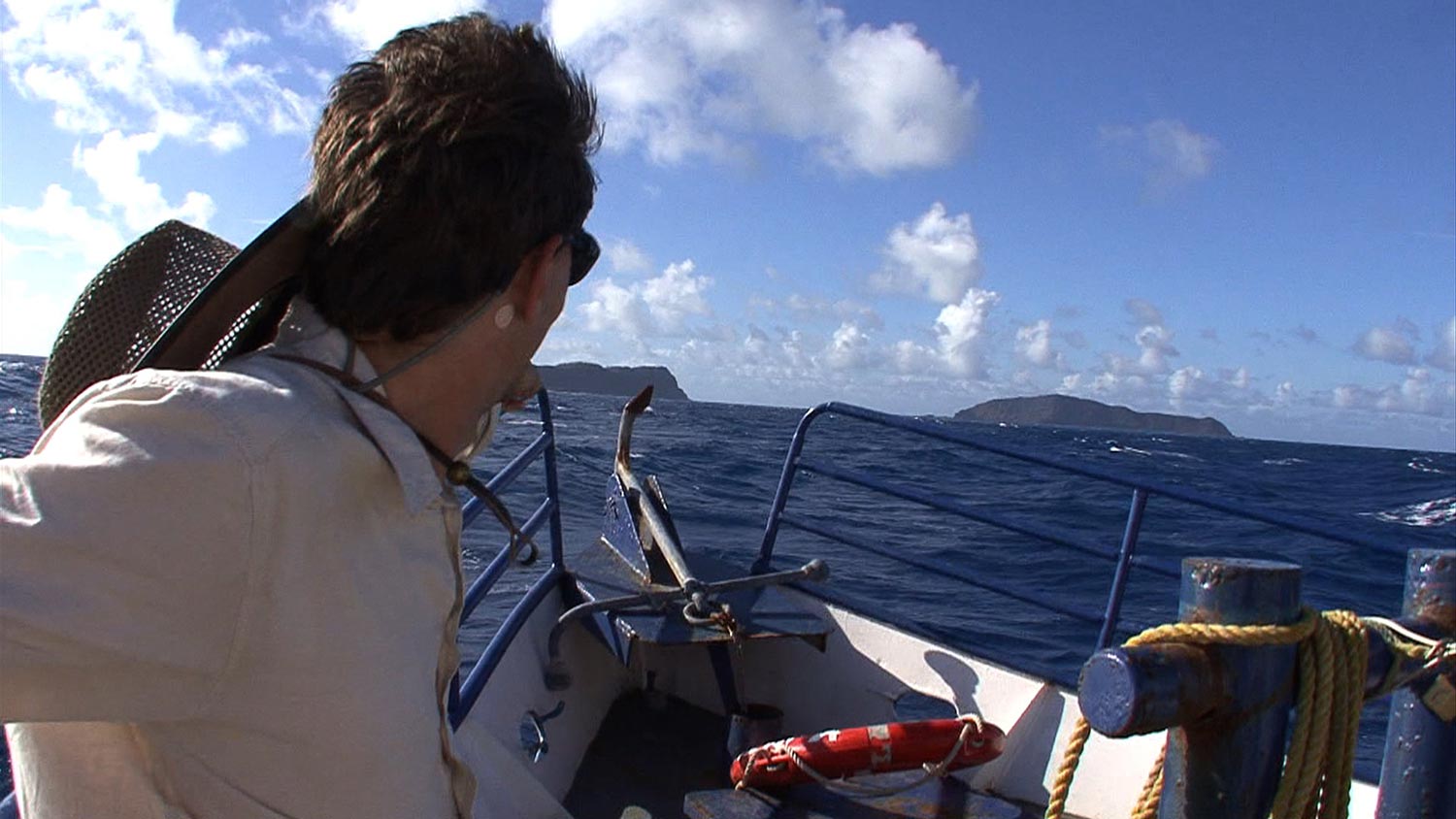 George and his crew sailing to the new island.

The problem was that it kept coming untied and drifting away. (I thought sailors were good at tying knots?) This happened enough times that one of the crew dove in and stayed aboard the small boat while in tow, his body shaded from the intense sun by a piece of plywood he held above his head for shade. Just when I thought everything was going to be okay, the situation went from bad to worse. Huge, rolling waves sent me flying into the corner of a table, cutting my eyebrow. If I had hit it two centimetres lower, I likely would have lost an eye.

With blood still running down my face, we finally got close enough to the island to spot it. The eruptions had stopped, which meant I could likely get ashore, but nothing was certain. I never trust a quiet volcano, especially one that had just been so active. Sometimes the pressure can be building up inside, which could erupt without any warning at all. Also, we’d been warned that the navy had been patrolling the area, keeping people away from the volcano, but for now no other ships were sighted, so it was time to get organized and make a dash for it. 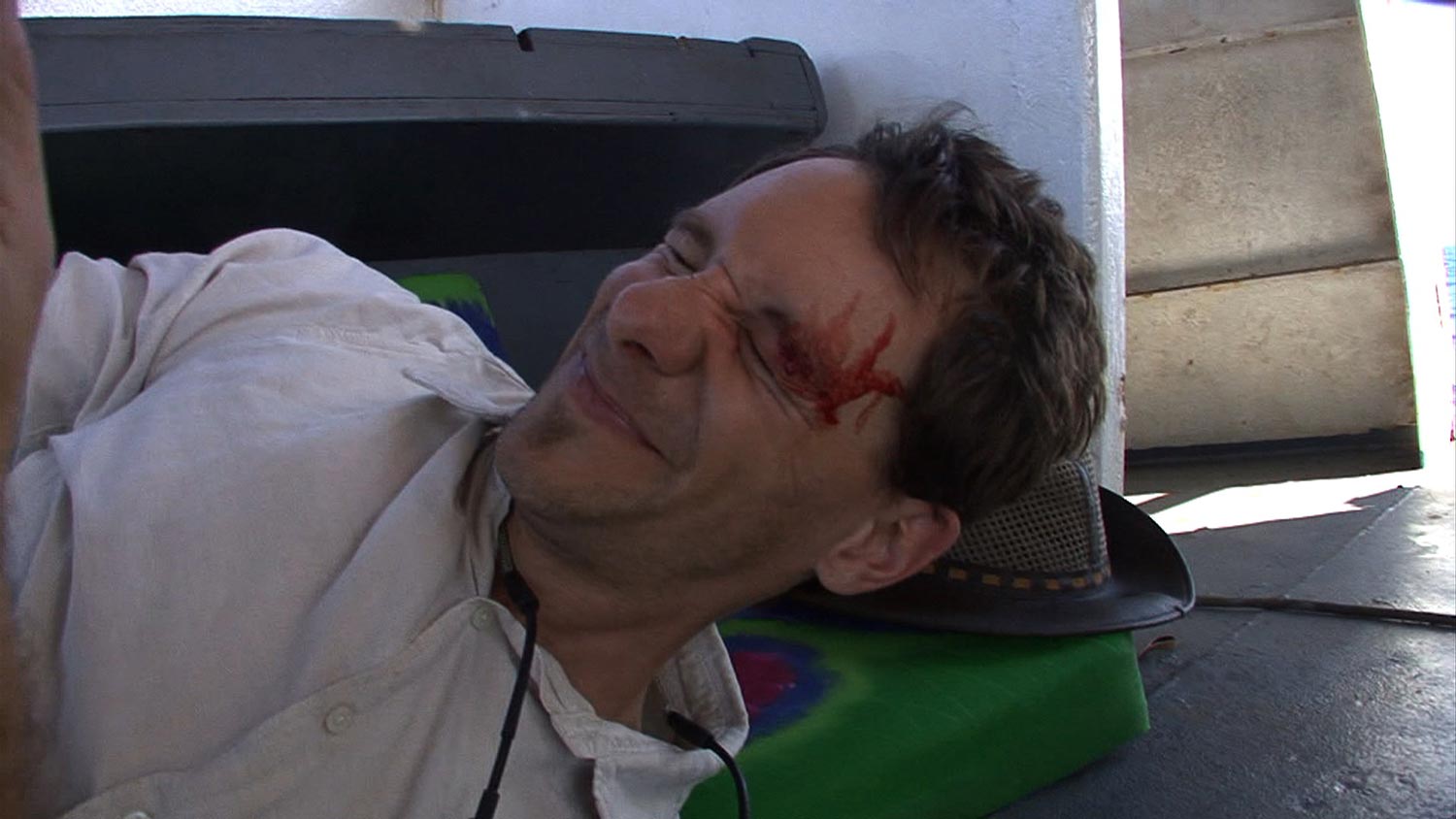 The aftermath of a big wave.

More problems. The sea was just too rough, and the shoreline too rocky to use the motorboat to land, so we abandoned that plan. Next we tried with kayaks, but the amount of filming equipment we had made them too unstable in the waves so the choices came down to: swim ashore, or abandon the plan altogether. Well, I’d come too far to turn back now, so myself and Angry Planet producer Peter Rowe loaded up two dry bags with cameras and clothes, and hit the water.

After a few intense minutes of battling the waves, and trying to forget everything I knew about the pelagic shark species of the South Pacific, I finally did it. I’d managed to set foot on a brand new, volcanic island. More people have been on the surface of the Moon.

My excitement was short-lived though, when I realized the dry bag that contained my clothes and cameras had flooded with water and been tossed onto the boat in the scramble to get ashore. There I was, trying to film an international TV series on exploration, and all I had to wear was my life vest, sandals and underwear.

The new island was low, just barely a few metres above sea level, and unstable. It wasn’t a solid mass of rock but rather a pile of loose rock, volcanic ash and pumice that could easily slide back into the sea, if a strong enough earthquake or renewed volcanic activity suddenly started up.

Many of the rocks were so brittle that I could easily crush them in my hand, the result of the erupting lava rapidly cooling when it came in contact with cold seawater. In the middle of the island was a steaming lake. The volcanic crater that spewed out all the rock that had built the island had filled with rainwater, and still held a tremendous amount of heat. The water was scaldingly hot to the touch, and the ground nearby was warm, like freshly baked bread that had just come out of the oven.

Islands like this usually don’t last—they come and go, briefly poking out above the waves for a short time, before the relentless waves of the Pacific inevitably erode the loose rock back down into the depths. Eventually, the eruptions can build up enough over time to allow the island to remain permanently high and dry.

As the light began to fade, we headed back to the shoreline to meet up with the small boat, but they were not there to greet us. They had returned to the main boat and were dealing with still more problems. This time the outboard motor was having trouble starting. We waited and waved and shouted for almost an hour, before they finally came within swimming range. 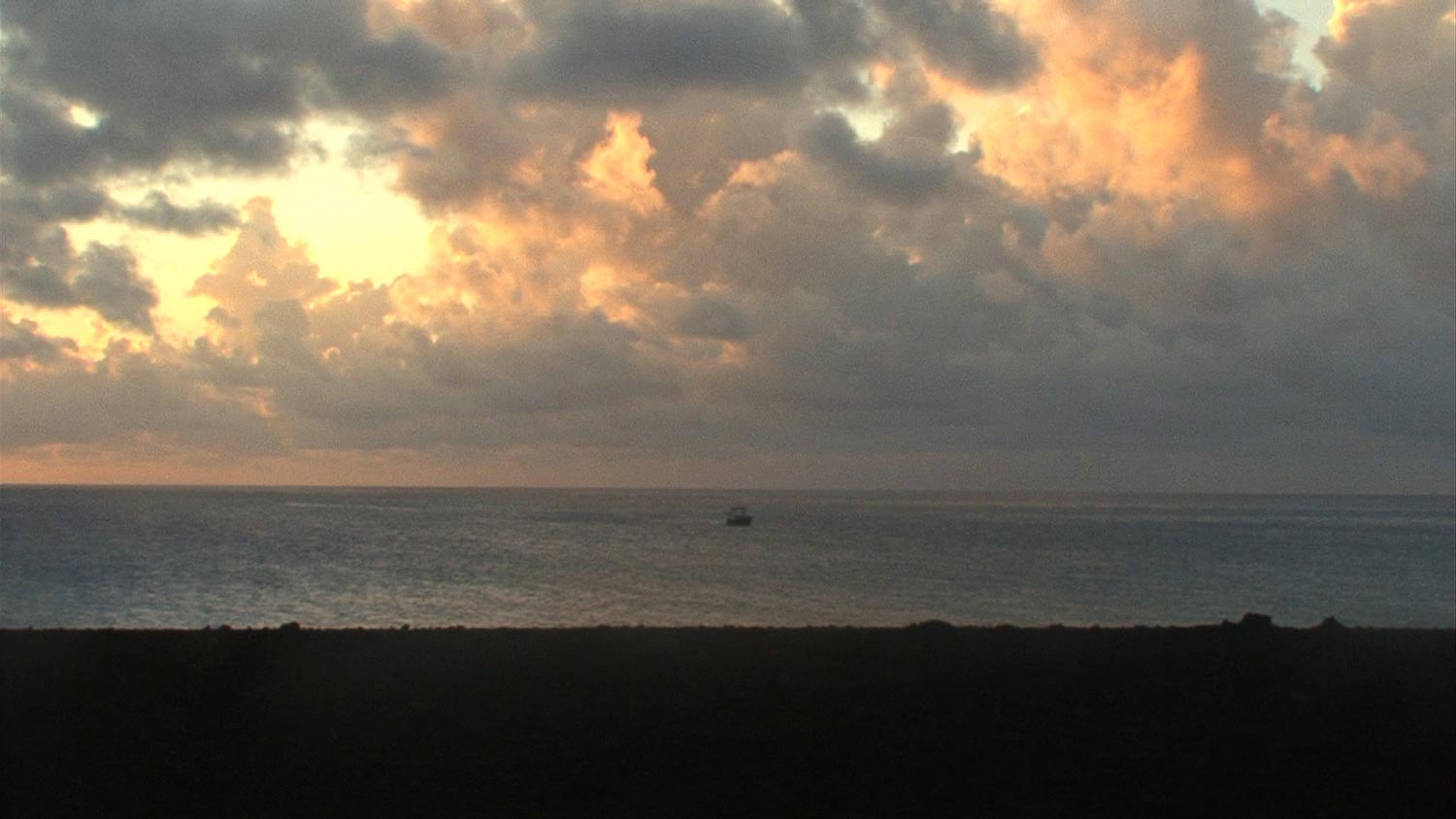 We dashed out into the sea and swam to the boat. I wasted no time, especially since it was dusk, which is prime feeding time for sharks and the cut on my eyebrow hadn’t healed yet. They threw me a rope and pulled me in, but Peter was nowhere to be seen. He had drifted off, and by now it was totally dark.

Luckily, his life jacket had an emergency flashing beacon that we were able to spot. It took a while to get the motor started, but we eventually caught up to him and hauled him in before he drifted too far out to sea.

Back at the main boat, we were all glad that the mission had been accomplished. But the drama wasn’t over yet.

The painfully slow journey back to port did not go well. In the middle of the night another problem in the engine room caused a hose for the cooling system to come loose and was filling the room with water. The crew were desperately bailing it out with buckets. The one remaining engine could’ve easily overheated, or the electrical system could’ve shorted out, or if it had gone completely unnoticed, the boat could’ve even filled up and sank.

To make matters worse, the small aluminum lifeboat we were towing had come loose again and was totally lost at sea. We now had no emergency boat as backup at all.

Despite all the difficulties, mishaps and challenges, it was still one of my favourite adventures—even if I was only able to set foot on the new island for a few hours. Being able to document the birth of a new island, and share that experience with viewers in more than 100 countries around the world, made it completely worth the effort. **

George Kourounis is a member of the Explorers Club of Canada. He specializes in documenting forces of nature and natural disasters, from tornadoes and hurricanes to volcanoes and wildfires. As host of TV’s Angry Planet on OLN in Canada, he’s travelled to more than 40 countries and all seven continents.

Sounds like an adventure. But I take exception that, “There are, quite simply, no new places for serious explorers to discover.” You may have been one of two people to stand on that island but you saw a very typical and “known” fresh volcanic landscape.

Meanwhile heavy vegetation cover, persistent snow or ice, or sand dunes hide plenty of “nooks and crannies” on land and we know less about the 70% of the Earth covered by oceans than we do about the Moon.

Make no mistake, there is still plenty to explore.