Four Oceans, No Planes | When Rain and Booze Shouldn’t Mix

From drinking at a Finnish hockey game to drinking at a Latvian opera, Dave and Jo learn when rain and booze don’t mix—and end up in a Lithuanian hospital.

Every city we’ve been to since Moscow—St. Petersburg through Helsinki through Tallinn, Riga, Vilnius and now Krakow—has had a functioning tram system, with rails underneath and wires overhead, and a little carriage at the front where a man or woman pulls levers to make it move.

Toronto has streetcars and San Francisco has tourist trolleys, but I’ve only ever been to one place outside of Europe that has trams like these—my grandmother’s former retirement village in Florida. I suppose it’s because it reminds me of her that I now jump at any chance to ride the tram, even when it’s cheaper and quicker to walk.

To hell with subways, monorails, LRTs, BRTs and the rest of them. The next city I live in will have a tram.

In Finland, we rode the tram to watch Helsinki Jokerit play hockey against Salavat Yulaev. It’s the Kontinental Hockey League, which is basically the Russian hockey league with a handful of teams from neighbouring countries.

I’ve never been to an NHL game in Canada, since tickets to my beloved Canucks cost about the same as a week’s rent in Vancouver. But in Helsinki, where everything else is priced through the roof, tickets in the lower decks behind the goalie were a reasonable 22 euros.

And holy mother of God, Finnish fans take their hockey seriously. I’ve never seen hockey fans like this, and I cheer for a team back home that twice set its downtown on fire when they lost the Stanley Cup. In Helsinki, they scream, they cheer, they sing songs, they stomp their feet until the whole stadium shakes, they curse and yell in four languages, they threaten mutiny and lynching upon the referee and linesmen.

At one point, when the ref missed what I thought was a pretty minor cross-check from Salavat, the crowd erupted in outrage, and I thought they were going to tear the arena to the ground. There are dancing girls, light shows, and the Jokerit Joker, the most punchable mascot since Chief Wahoo.

Otherwise, the cold is fine but the rain is starting to wear us down. The last two weeks have been slick with rain—today the sun is out, the first time I’ve felt it full in the face since we were in Moscow. What this means is we’ve been doing a lot of sitting in bars.

In Riga, capital of the tiny Baltic republic of Latvia, we toured the city’s Art Nouveau architecture. It’s a wonder, a truly beautiful little city. Buildings regularly feature hulking Greek gods holding up the higher storeys, great gargoyles pointing out from the walls, angels trumpeting on the roofs and disturbing faces, wide-mouthed and screaming in agony. 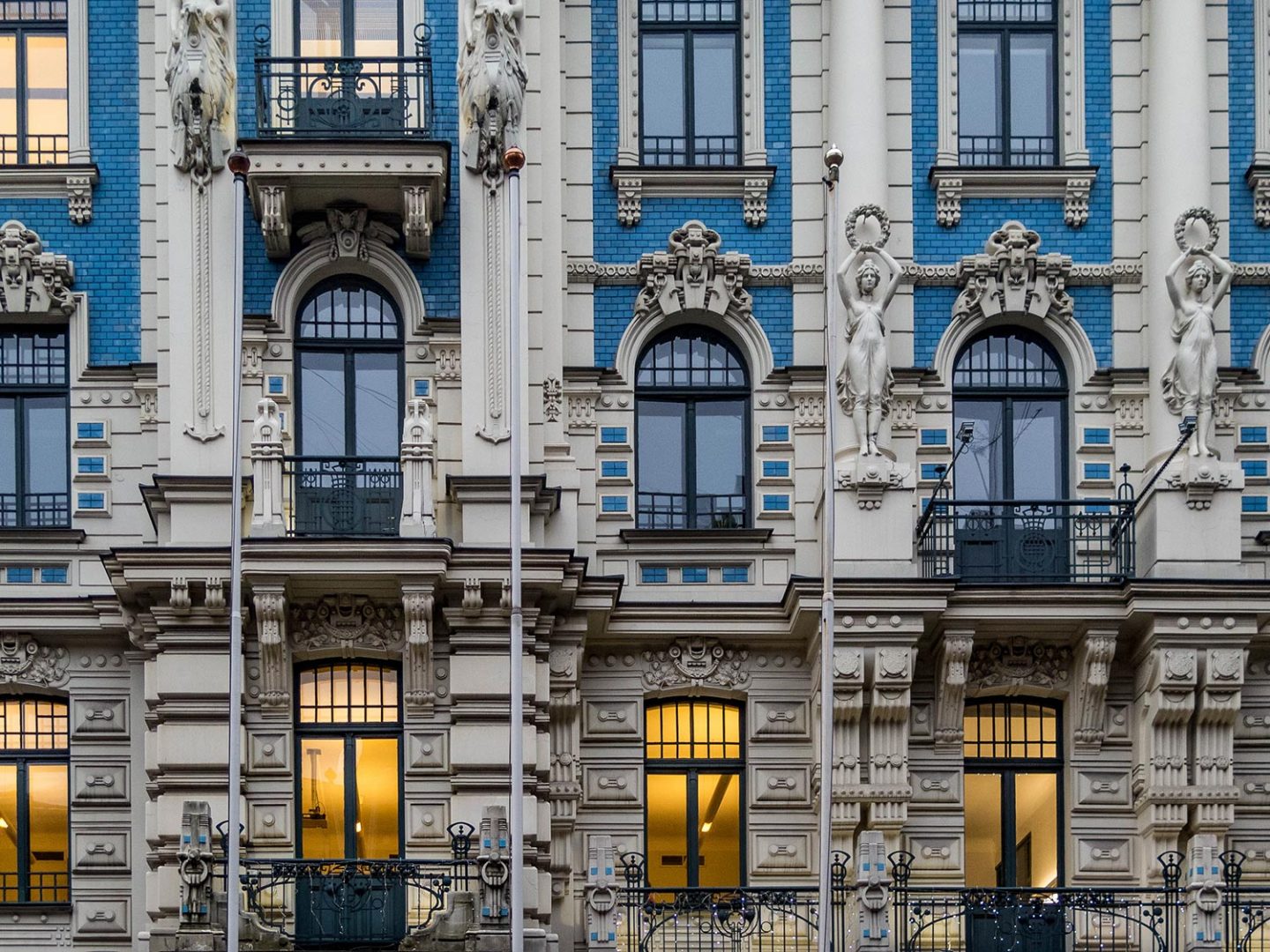 The facades of Riga will delight any architecture fan

But it’s all coated in a sheen of rain. Soon, my favourite buildings weren’t the architectural marvels but the ones that served booze.

I have a very low tolerance for caffeine, so cafes are out of the question after my first cup of coffee, unless I want a splitting headache and to be buzzing around like a coked-out chipmunk for the rest of the day.

So, we went boozing—but, hell, isn’t this what Europe is for, especially after having spent so much time in Islamic countries? In Riga we hit five bars, including one right inside a record store, before going to the opera.

It was at the record store that we noticed our opera tickets had printed, in large, bold letters, “BLACK TIE”. The word “optional” did not appear before or after. Since we already had the tickets, and we’d been drinking since 3:00, we figured we’d try to get in anyway; probably because we were way in the upper balconies with the rest of the scum, they let us in black tie-less.

The opera was called Eugene Onegin. It’s about Russia or something.

But then, rain and booze don’t always mix well. After a glorious Saturday night out in Vilnius, including great new friends and a dreadful alternative band, Jo slipped on the cobblestones and rolled both her ankles. Two kindly old ladies, obviously used to seeing this kind of thing, found chairs for us to sit on and called an ambulance, even as we protested that we didn’t need (read: couldn’t pay for) one.

The ambulance came anyway, and we were whisked away to a hospital outside of town. In the waiting room, we watched a man try to navigate his way to a stretcher bed, so drunk it looked like he was on a ship pitching and tossing in the sea. He was eventually restrained by the nurses.

We saw the doctor at about midnight, a young guy who had obviously picked the short straw and was stuck on the Saturday-night shift, where you deal primarily with drunken idiots like me, my wife and the restrained guy. He asked Jo some questions, played around with her ankles, told her to elevate her legs and apply ice and dismissed us.

The whole bill: 16 euros. The cab back to the hostel cost more.

Merry Christmas, happy Hanukah and a glorious Kwanzaa to all!

Visitors to Canada Now Need an eTA to Enter the Country