Let Them Rest in Peace

Cloaked in the dirty pastel of a Varanasi sunrise, our little boat glides away from the banks of the Ganges River. Dhoti-wearing men and sari-clothed women bathe on the riverfront steps alongside brunet cows with boney posteriors. Delicate offerings of flowers and candles float in the murky water. Just as the acrid smoke awakens my nostrils, our boat wallah points out the Manikarnika Ghat, lined with some of the most sacred funeral pyres in India; it’s believed those cremated here are released from the cycle of reincarnation.

Perhaps due to reading Stephen King at an impressionable age, I’m captivated by death and the macabre, and was initially stoked by the notion of visiting a funeral pyre. But actually being here, I’m suddenly guilt-stricken. This is a heartbreaking and intimate familial moment, and although we’re at a respectful distance—I can make out the mourners’ bodies, but not their faces—I still feel like I’m rubbernecking. 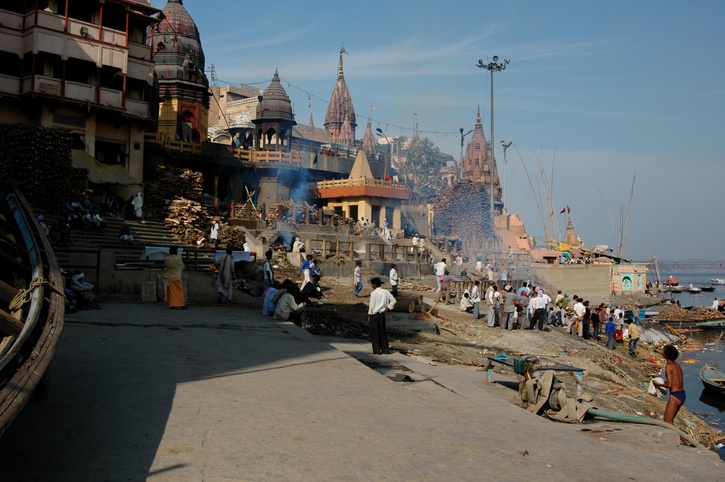 Manikarnika Ghat, India, most known for a place of Hindu cremation. (LSP1982-iStock)

So, this is the line between inquisitiveness and nosiness.

As I’ve written before, developing nations are sometimes so dependent on tourism for survival that people (or animals) are exploited to entice foreign dollars. Just because you can do something, doesn’t mean you should.

At the Manikarnika Ghat, I had to ask: Does my personal curiosity outweigh others’ right to privacy?

The concept of privacy is admittedly different in India than in the West. When so many people live crammed together or on the streets, bathing in public, for example, becomes the norm because there’s no real alternative. At the Manikarnika Ghat, families cremate loved ones simultaneously, side by side. And while there’s a difference between glimpsing somebody’s cremation from a boat in the middle of a river in India and directly wandering into somebody’s funeral at a Canadian church, I can’t imagine either family would be pleased by the idea of gawking tourists snapping photos.

Many backpackers are mindful of decorum when on sacred grounds—they respect dress codes, abide by photography prohibition and speak quietly. However, many of us take for granted that because we’re allowed to be there—maybe the temple is mentioned in a popular guidebook— nobody is bothered by our presence. This isn’t always the case.

Years later, while hitchhiking in the Chiapas highlands in Mexico, I visited a “hybrid” church in San Juan Chamula. Local Tzotzil rituals are incorporated into the Catholic church’s practice: perishers seek help for their physical, mental or “evil eye” afflictions from shamans; these spiritual guides then suggest whether an offering of a special candle, soda pop, cane sugar liquor or a live chicken will best cure their condition.

This church sounded fascinating, and it was—except the leering tourists outnumbered the kneeling Mayans, and it was obvious the worshippers didn’t appreciate the dynamic. Unfortunately, San Juan Chamula isn’t a wealthy region, and many locals rely on selling souvenirs to these curious travellers.

It’s not always offensive for outsiders to visit hallowed places. I’ve been invited to temples by locals excited that Westerners are curious about their culture and religion. But there are times where the balance is lost, as in San Juan Chamula, transforming the holy site into more of an exhibition ground than a spiritual sanctuary.

Sadly, it can be difficult to figure out how welcome tourists really are until you’re already there, and even then not all worshippers will have the same opinion toward outsiders. Just stay mindful of the overall vibe—if you get the sense you shouldn’t be there, then you’re probably right.