Travel Book Review: It’s Only the Himalayas and Other Tales of Miscalculation from an Overconfident Backpacker​, by Sue Bedford

“Sara’s mom was right—we were going to die.”

That’s what 23-year-old Sue thought when the two friends left on a yearlong round-the-world backpacking trip. Sara had always been exasperatingly perfect—responsible and capable, and newly graduated with a pre-planned future career—while Sue is the adventurous instigator, trapped in a dead-end waitressing job after dropping out of school.

Throughout the journey, they trade one-liners like mismatched partners in an ’80s detective show, as they struggle to find their place in the world and question the choices they’ve made so far. 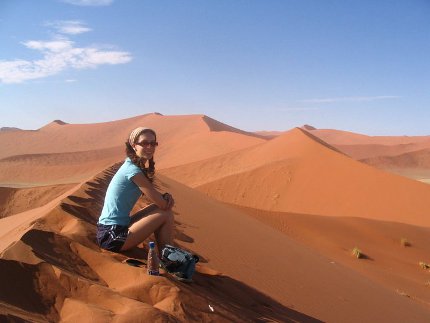 The characters are likeable, and I found myself cheering them on, hoping they make it but that it all goes wrong along the way, so they’ll experience the sort of minor disasters which make the best stories, at least in hindsight.

And I was not disappointed.

But don’t pick up Sue Bedford’s first book, It’s Only the Himalayas and Other Tales of Miscalculation from an Overconfident Backpacker, expecting yet another naive “isn’t it lovely” gloss on the backpacking experience.

Bedford never hides the miseries: the endless waiting, the culture clashes, the explosive diarrhea. And there’s a refreshing dose of skepticism to her writing that I strongly related to.

I mean, how many backpackers go on an ashram retreat and don’t come out transformed, pacifist, utterly yogic, and with a full set of Indian clothes? You’ll find no bandwagon-jumping transformation stories here. And that is a refreshing change.

Whether describing distant thunder that “echoed over the plains like an empty wine bottle rolling across a hardwood floor,” or waves in the Philippines—“glittering like the sequins on a ladyboy’s miniskirt”—Bedford has a keen eye for finding that one perfect image which captures the surreality of a situation.

At the start of the story, Sara—the practical, pre-planned one—seems to have the advantage, while Sue stumbles around, sometimes literally, in search of a direction for her trip and her life. But somehow we know it’ll all work out for Sue in the end. That the road will lead her in the right direction, and that it will be a rewarding one, filled with adventure.

Bedford brings a fresh voice to travel writing, one that is funny, observant, and original. Give this book to anyone thinking of doing their first trip, and to anyone who needs to get out there again.

It’s Only the Himalayas and Other Tales of Miscalculation from an Overconfident Backpacker (published by Brindle & Glass, April 2016) by S. Bedford is available at Chapters Indigo, Barnes & Noble and on Amazon.For more information, go to sbedford.ca

Four Oceans, No Planes | The Lao-Chinese Bus Ride From Hell

Fight or Flight: The Consequences of In-Air Conflict