As summer 2021 gets underway, you may feel the need to get out and explore — or just get outside! — like never before. Running, canoeing, and cycling micro-adventures are all great ways to renew your relationship with the outside world.

In a new series for Outpost, Rob Brodey sets out to ride (that is, cycle) the railway trails of Southern Ontario. In his first post, he tackles the Tiny Rail and Uhthoff trails of Simcoe County.

One hundred and sixty years ago, southern Ontario’s economy was picking up steam, with lots of new industries cropping up all over the region. But products and raw materials needed a way to get to market, and people needed to get from place to place to live and work.

At that time, trains became the most practical mode of transportation, as the rutted dirt paths made for a very slow and uncomfortable ride by horse and carriage.

Fast forward to the near present when the economy once again shifted focus. Many of those once vital rail lines criss-crossing the province were abandoned and became overgrown with weeds.  That’s when some very wise local governments, conservation groups, and private organizations started to think about what to do with these beautiful corridors gently graded for those lumbering trains.

From those planning sessions came the birth of the “rail trails,” linear multi-use paths — for cycling, running, walking, cross-country skiing, and horseback riding — that wind their way through forests, fields, and marshes. In Ontario, there are dozens of rail trails with more in the works. These trails range from 7 kilometres to 100-plus kilometres (one way).

Before Covid-19, there was already a growing buzz around these trails; but now, with the pandemic in its second year, many of us have reset our gaze from far flung travels to adventures closer to home. The need to get out during the pandemic is manyfold, not the least of which is seeking some mental spaciousness and a chance to shake ourselves from what some have described as a perpetual Groundhog Day scenario, where every day feels like a repeat of the day before.

We crave — I crave — an experience that will shift us, open us up to a renewed sense of possibility. That’s why I bought a gravel bike over the winter and began plotting to ride various rail trails around Ontario through the spring, summer, and fall — from the glorious shores of Georgian Bay to the historic Niagara Region and the lake district around Smiths Falls.

So what’s a gravel bike, you ask? At first glance, it could almost pass as a racing bike with drop handle bars, but its geometry has been tweaked for stability and comfortable long-haul riding. It’s also a tad more robustly built than a road bike to handle a variety of surfaces, including, yes, gravel, pavement, mud, and dirt.

Many models also have eyelets on the frame to mount racks for panniers for overnight bike trips (more on bike packing in a future post).

Other notable features of gravel bikes are their range of gears to deal with all sorts of terrain, whether it’s a short steep climb, a long grinding one, or navigating through deep mud or speeding along smooth pavement. Disc brakes are also common fare on gravel bikes, which not only provide lots of stopping power but also allow for larger tires than traditional calliper rim brakes. Wider tires, I will soon find out, are more grippy and comfortable on longer rides over rough surfaces.

So it’s early May, and I’m fortunate enough to be staying for a few days at a cottage along the shores of the vast and sometimes moody Georgian Bay with my wife and son.

The spring weather is still unsettled, and after a night of rain, I suit up and cycle along rolling country roads to an entry point of the 23-kilometre Tiny Rail Trail for what is to be my first ever rail-trail ride. Because these former rail-lines intersect with roads every few kilometres, it means trail users can easily access these paths at various points along their length. 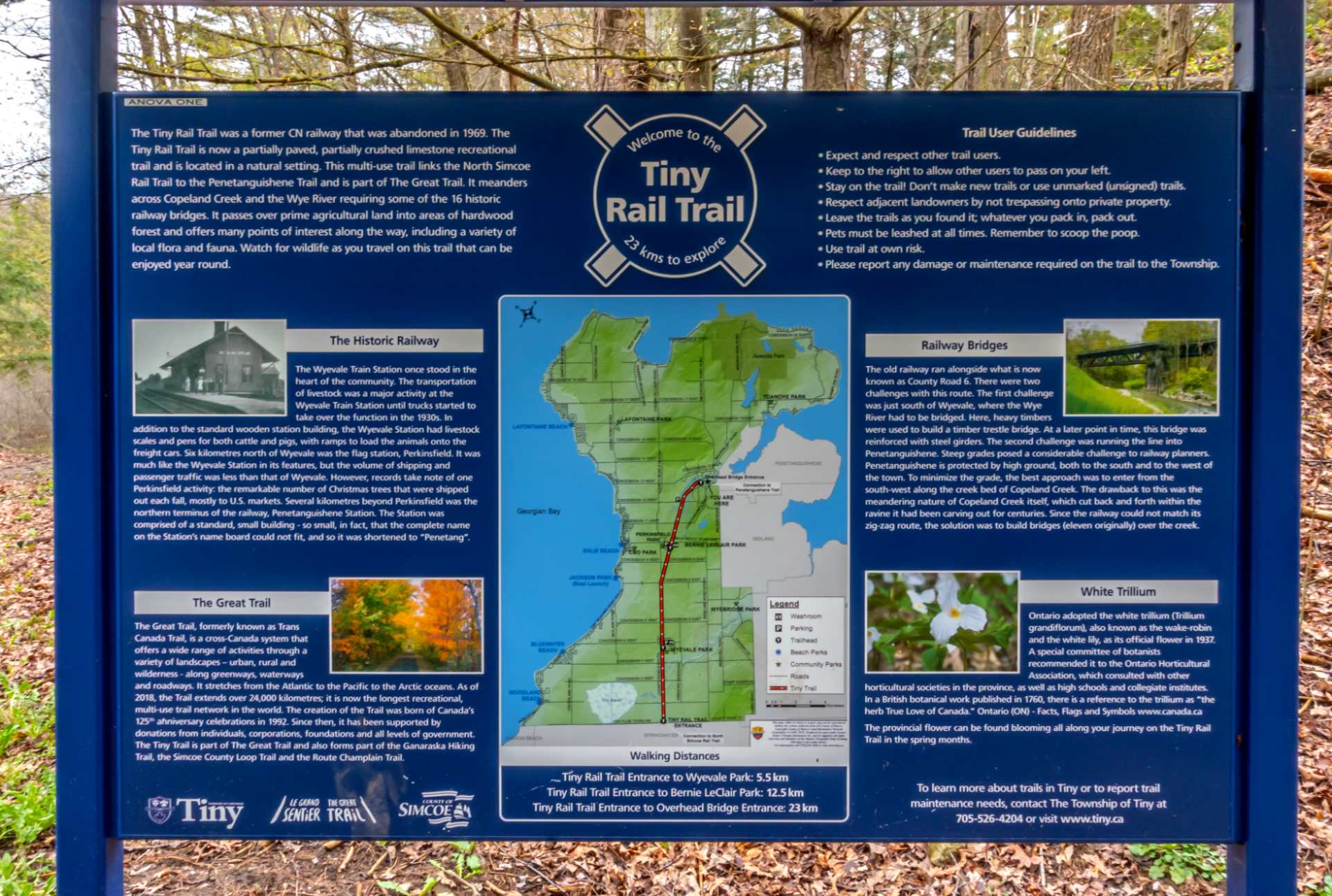 The really cool thing about this rail-trail system is that many of the paths are tied together. For instance, the Tiny Rail Trail is not only part of the 160-kilometre Simcoe County Loop Trail (linking Barrie, Midland and Orillia), but it’s also part of the gargantuan 27,000-km-long Trans Canada Trail (a.k.a. The Great Trail), which is an amalgam of something like 400 locally managed trails spanning from the Atlantic to the Pacific to the Arctic oceans. 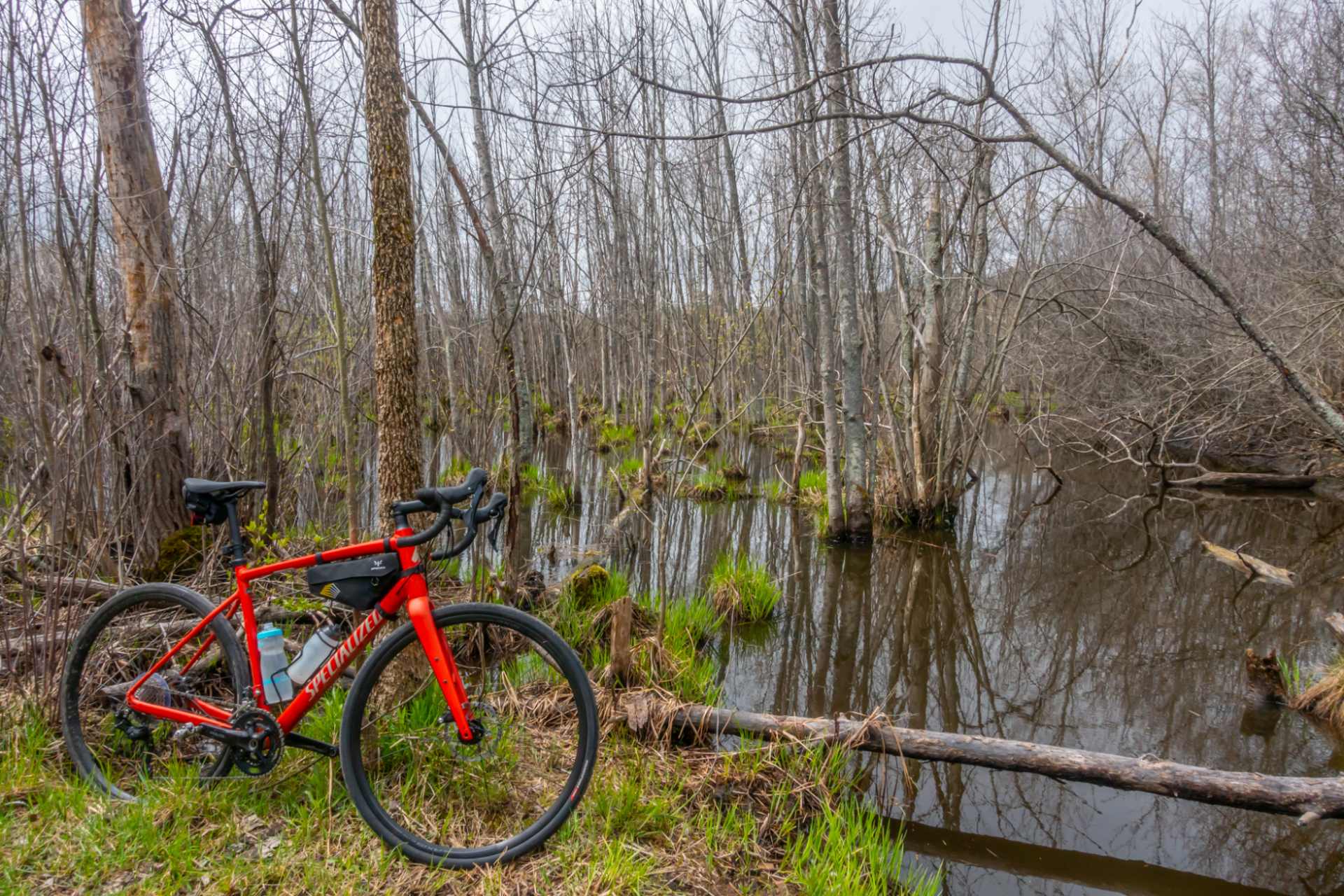 Just getting outside: stopping for to check out the landscape and wilderness along the Tiny Rail Trail.

Along the Tiny Rail Trail, I pedal north toward the historic town of Penetanguishene, travelling a well-groomed tree-lined path, with farmers’ fields gracing both sides of me. With no speeding vehicular traffic to negotiate, I feel infinitely safer and more relaxed. The rail line itself was used back in the day to ship lumber to market from Georgian Bay, but was abandoned in the early 1990s, according to www.ontariobiketrails.com, an amazing website dedicated to off-road cycling in Ontario.

I stop to read a trailside plaque that describes the once flourishing Huron-Wendat villages in the area, and try to imagine what life was like before the arrival of the French explorer Samuel de Champlain to the area in 1615. Theirs was largely an agrarian society, growing corn, squash, and beans in the fertile soil. The Huron-Wendat of this part of southern Ontario also had a solid trading and social network with several other Indigenous groups, including the Odawa, Tionontati, and the Neutral Confederacy.

Apparently, Khinonascarant, the largest of the Huron-Wendat villages, consisted of an impressive 200 longhouses, each controlled by the matriarch of the extended family. At one point, more than 100,000 Huron-Wendat occupied this area, and the plethora of archeological ruins “bear witness to this occupation.”

As I approach Penetanguishene, I see more people hiking along the trail, and I cross a dozen or so historic wooden bridges along the winding rolling trail. Soon I leave the forest and ride through suburban backyards — with trampolines and above-ground swimming pools — on my way to the waterfront.

The ride to Penetanguishene on the rail trail may have been only 16 kilometres, but it feels surprisingly restorative. Of course, because most of the rail lines are not loops, my ride is only half done, and I’ll need to yo-yo my way back along the same path — but not before getting my snack-on waterside.

The following day is cool, the clouds hanging low in the sky. I drive along Highway 12 from Midland to Waubaushene, on the windswept shores of Georgian Bay. Today’s ride will take me from Georgian Bay 32 kilometres south to Wilson Point on Lake Couchiching via the Uhthoff Trail.

I park at the trailhead on Coldwater Road, mount my bike, and ride south, following the historic railway line, which used to haul grain from the prairies to awaiting Europe-bound ships in Halifax.

For several kilometres, I pedal in view of wetlands, though I remain high and dry on the elevated rail trail. The hum of my tires over gravel may not be quiet, but I’m grateful to be alone for a few hours with my own thoughts. Out here, I allow myself to shed the feeling that has haunted me throughout this pandemic: that I’ve failed as both a parent and an employee, having been stretched too thin for too long in too many directions, all while still trying to pursue my writing and maintain a semblance of physical fitness. 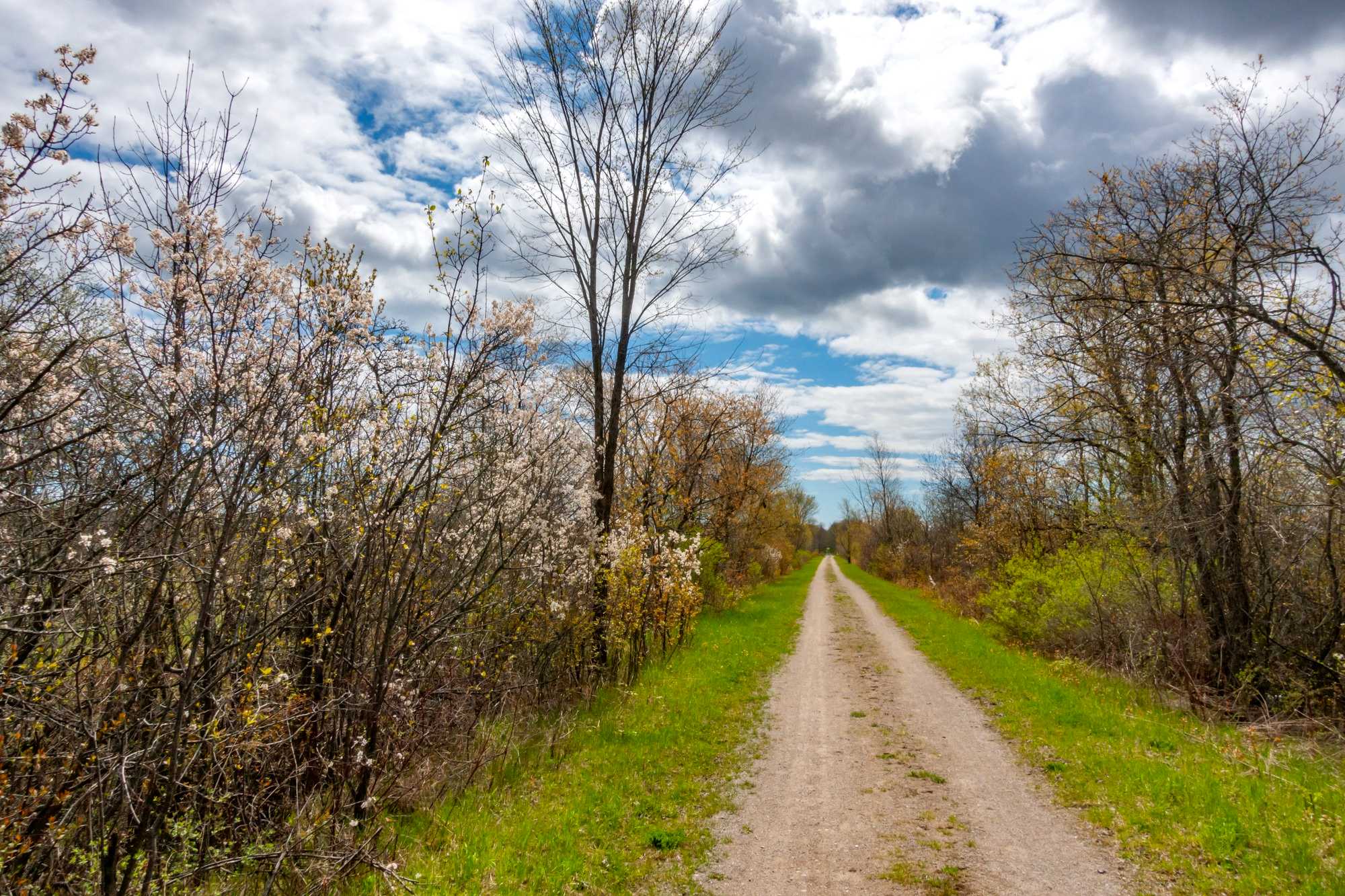 Riding along the Uhthoff (Rail) Trail, taking time to be alone and reflect on the events of past year.

As the kilometres tick away, I navigate several gates that mark the intersection between the trail and the road. It’s closer to these access points that I see more people — young and old, biking and walking, alone and in groups, walking dogs and pushing baby strollers. And that’s the beauty of these rail trails: they are free for all to use year-round, with no reservations required. 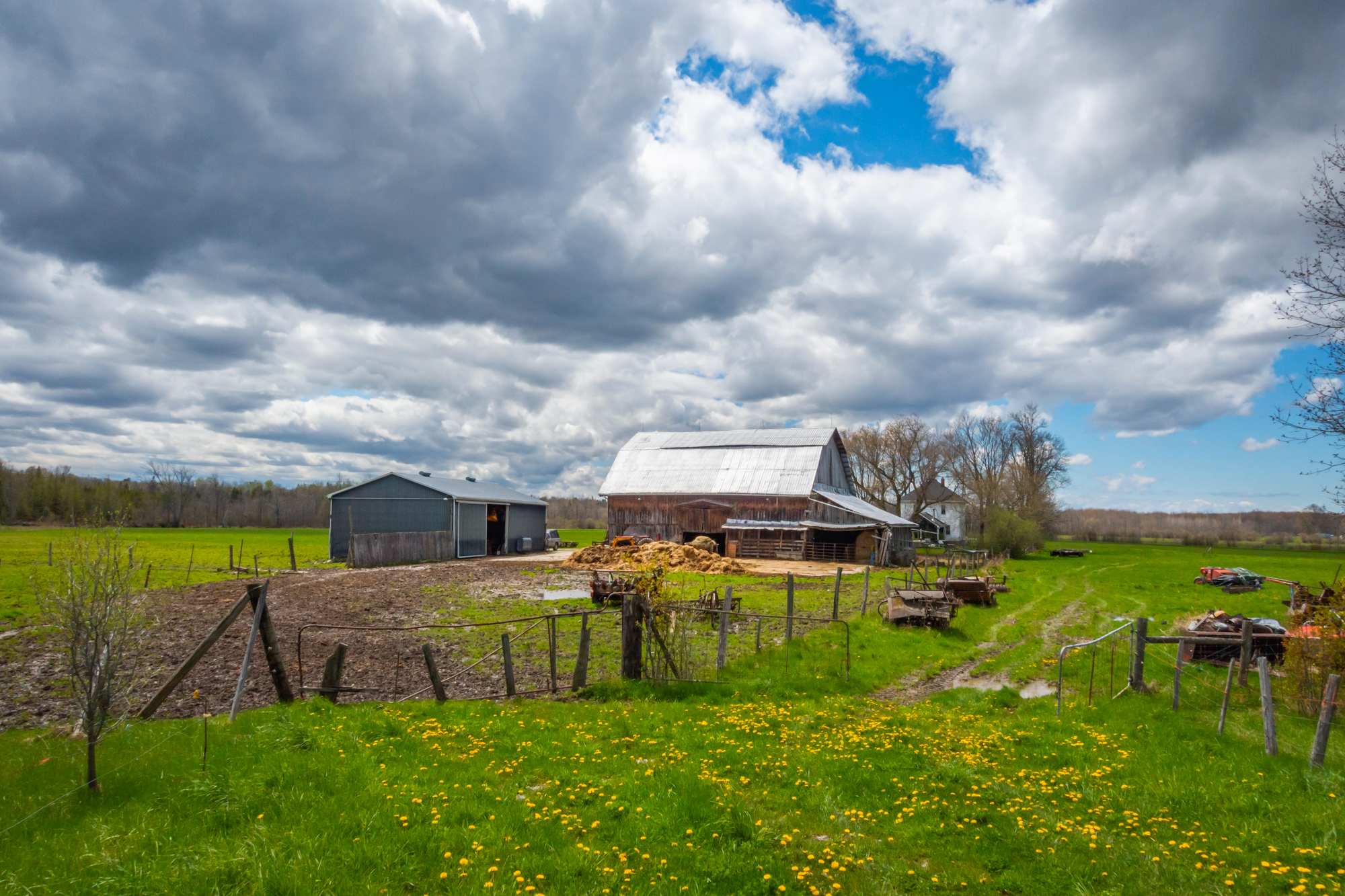 Farmland along the Uhthoff Rail Trail.

After 32 kilometres of leisurely cruising, I arrive at the placid waters of Lake Couchiching. I try to enjoy the view, but clouds of mating midges are swarming the waterfront and attempting to fly up my nostrils. I escape the midgefest and begin the ride back to Waubaushene. Along the way, I stop at a plaque to read about a nearby ancestral Huron-Wendat ossuary from the 14th or 15th century. Apparently, every decade or so Wendat communities would move their villages, and those that had died during the occupation were unearthed and reburied all together.

“The purpose of this sacred form of burial practice,” according to the sign, “was that ancestors would remain together, as they had in life, connected forever in a new community.”

I know it has become common practice in Ontario to do an Indigenous land acknowledgment during public events, but I find bicycling through these traditional Indigenous territories, reading about the local history as I go, suddenly grounds these acts of acknowledgment in a more meaningful way for me. My personal acknowledgement is visceral. I feel it in the passing forests and lakes. Of course, reconciliation doesn’t end with acknowledgement. There are still many outstanding issues to be addressed — about decolonization, the nature of Indigenous revitalization, and the realignment of the relationship between Indigenous and non-Indigenous people on this land. 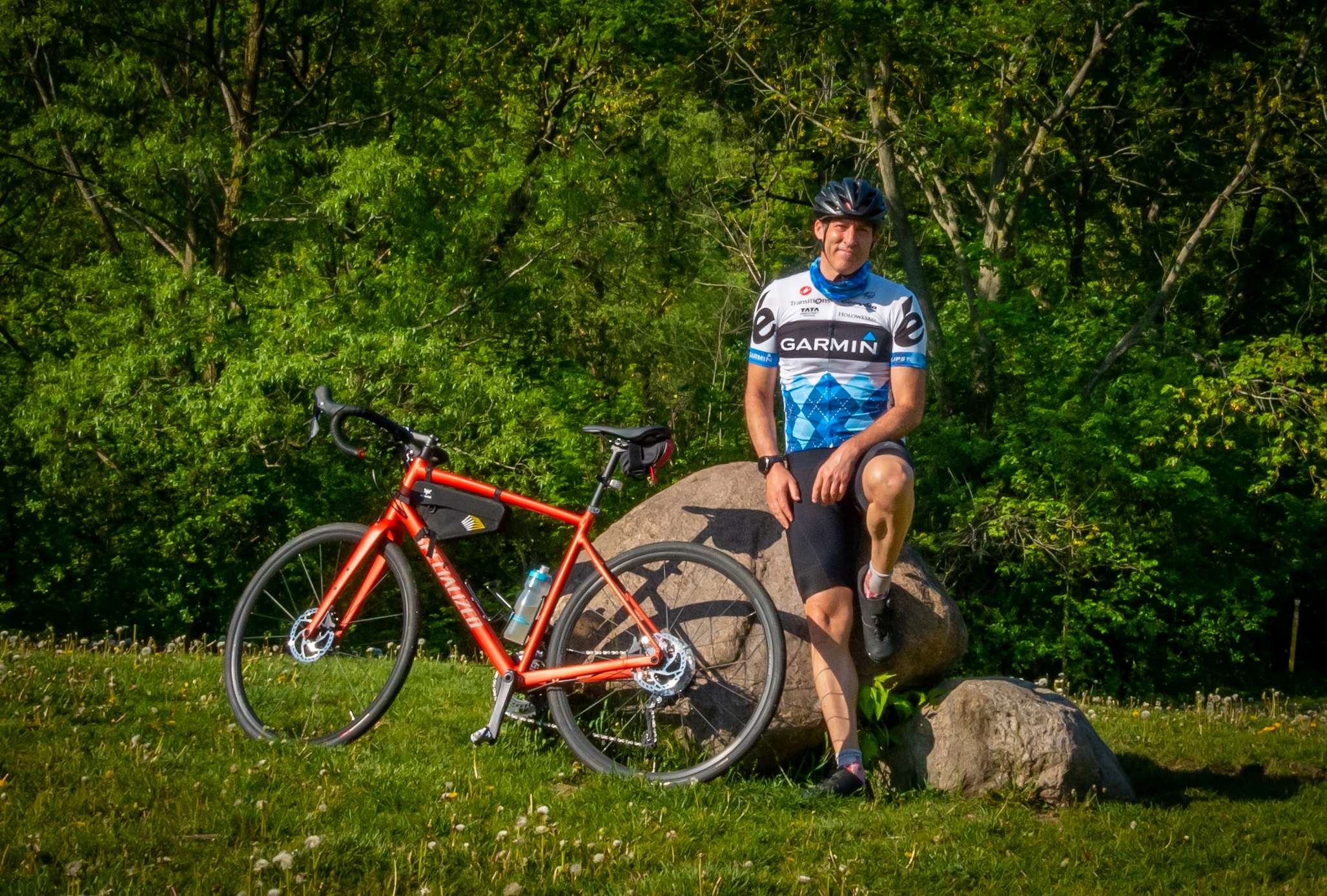 Skipping school for a day on the trails? Yes, says Rob. Kids won’t remember what they missed but will sure remember biking with mom.

The 64 kilometres of pedalling has me back at the parking lot in Waubaushene. I watch as three boys aged 7 to 11 emerge from the Tay Trail that runs north of here. They are giddy and comparing notes about how fast they were and how much fun they had.

Soon their mom pedals up from behind. She, too, is grinning ear to ear. She sees me in my cycling kit and says, “It isn’t wrong that I took them out of school to ride their bikes for the day, is it? I just felt like they deserved a break from all this online learning.”

“Absolutely,” I offer, attempting to allay her guilt. The kids won’t remember the classes they missed. “But they’ll definitely remember taking the day to go biking with their mom.”

Paddling Hazards: Know Before You Go | A Beginner’s Guide to Solo Canoeing (Part 4)