I looked up to see a naked man towering over me, holding an unlit cigarette. He was smiling politely, but I had to crane my neck at a sharp angle to avoid speaking directly to his genitals. The waves sighed softly in the background as I told him in polite German that I don’t smoke, and he moved along down the beach to ask another bather.

Such encounters were a normal occurrence, for we were on the Baltic coast of Germany, and deep within FKK country. What is FKK, you ask? It stands for Freikoerperkultur—or Free Body Culture—and it involves getting naked outdoors.

That’s what we were exploring on the island of Rügen. Not “the full monty”—that’s quite normal on European beaches—but German beach culture and the bathing and spa scene of the 1920s and 1930s. 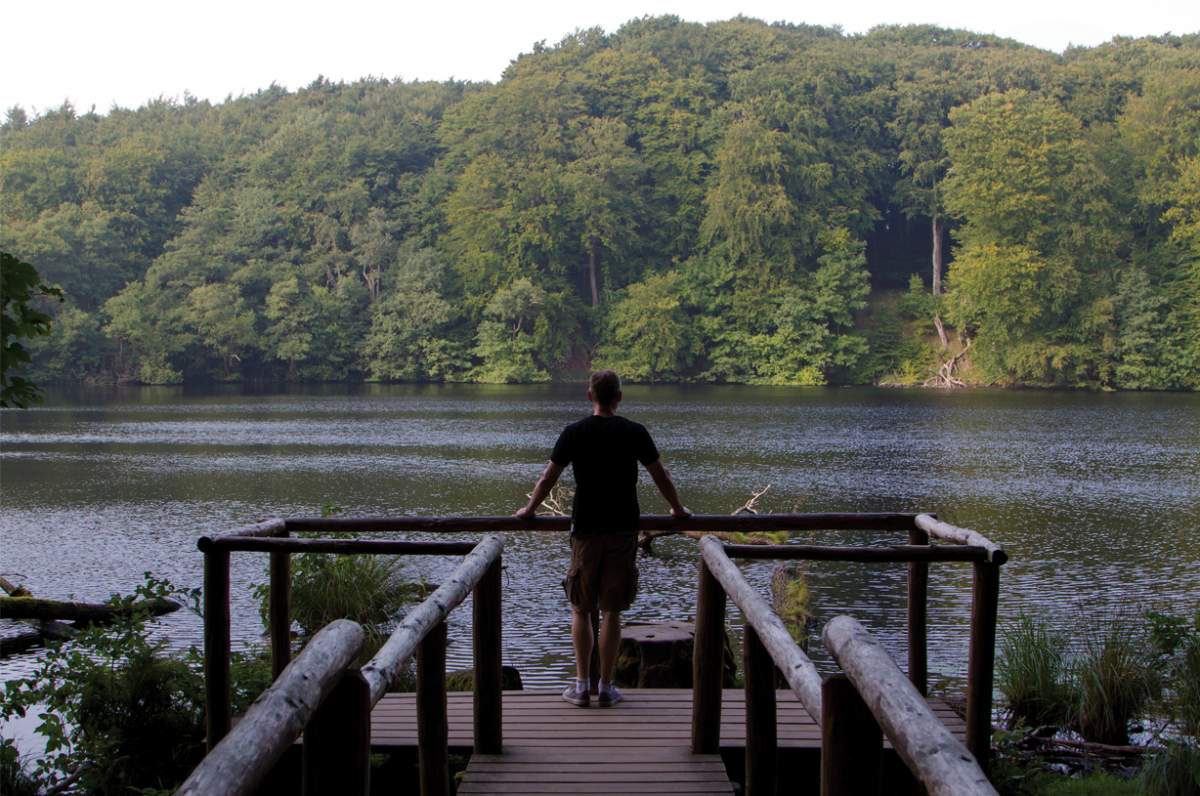 Our writer between the woods and the water at Jasmund

Despite the very long existence of summers, the idea that sea bathing and salt air had health-promoting properties is a relatively recent occurrence. As far as I can tell, it was a 19th-century phenomenon, and on the Baltic coast, much of the credit goes to medical professor Dr. Samuel Gottlieb von Vogel, a native of the town of Rostock.

Dr. Vogel’s published work includes his 1789 bestselling attack on onanism, About self-immolation: Teaching for parents, educators and children’s books; How to discover, to prevent, and to heal the unbelievably vicious vice of destructive self-abuse. But it was his convincing the Mecklenburg Duke Friedrich Franz I of the healing power of the seaside that resulted in the founding of the resort of Heiligendamm, and the subsequent spa boom.

Oddly enough, only about half of the distinguished visitors to these spas actually dunked themselves in the Baltic. They were there to see and be seen. Who had time for paddling around when there was eating and gambling to do? When not sashaying ostentatiously down the beach promenade, visitors treated themselves to expensive concerts, theatres and horse races. Two days at a spa reportedly cost the equivalent of one month’s salary. 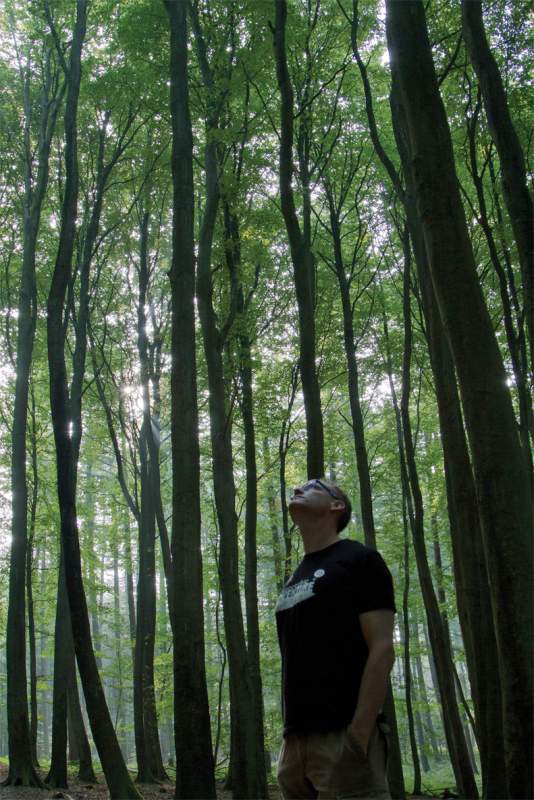 The Baltic became fashionable in the first half of the 19th century thanks in part to excellent railway connections between major cities and seaside resort towns like Stralsund, Wismar, Wieck, Greifswald, and of course those on Rügen. The main streets of these towns were lined with wooden Art Nouveau summer homes, hotels and shops: two- to four-storey structures whose facades were embellished with balconies, gables and verandas, painted soft pink, linen white, and faded lime. Sellin pier stretched its wooden walkway out into the gentle Baltic waves, and the sand was soon peppered with those distinctive wicker half-shell chairs—the strandkorb, or “beach basket”—designed to keep the wind at bay.

But despite the towns and piers that the spa craze left on the coast, it was artists and painters who put Rügen on the map. In the summer of 1801, the painter Caspar David Friedrich, then just 27 years old, created a series of work that changed landscape painting in a major way, intensifying it, and drawing in moods which were at once vaguely yearning, delicate and inward. He is believed to have painted his famous “Chalk Cliffs on Rügen” in 1818. And it was this, as much as anything, that crystallized an image of the island as a mythical place of unspoilt beauty and deep spiritual feelings.

Rügen was an interesting choice, given that it had been a site of the old pan-Slavic religions of Svantevit, whose temple stood on Cap Arkona. The first writers and artists who went there were searching for connection with a mythical era when harmony reigned between individuals and the world. Modern Germany, with its industrialization, rigid codes of conduct and stifling expectations, was an abomination, and getting back in touch with nature was the cure. 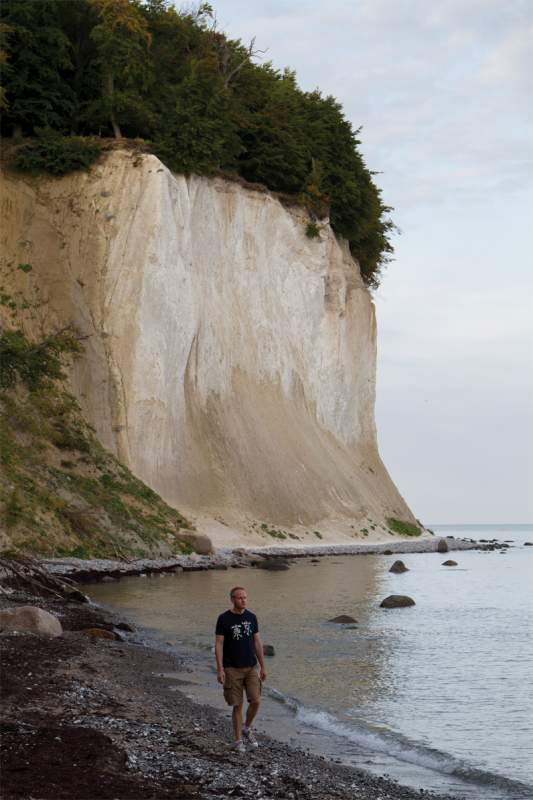 The stunning chalk cliffs of Rügen

This doctrine would spark a widespread cult throughout Germany, manifested most visibly in the Wandervögel movement of 1896. These “wandering birds” were mostly young Germans from middle-class homes, and they followed many practices which are considered mainstream today, including vegetarianism, natural medicine, nudism and abstinence from alcohol. They were anti-bourgeois and pro-pagan, and they formed communes and cooperatives, and organic gardening communities.

It was a time of exploration and of pushing cultural norms. The first nude beach in Germany was established in 1920 on the Baltic island of Sylt, and it quickly spread across the coast. Even today you’ll find a mix of clothed and unclothed people coexisting peacefully on German beaches and in city parks.

It was no wonder they flocked there in such numbers. The light of Rügen is like nowhere else, softened by water—the sea, lagoons, marshes and puddles of rain—and by gentle dunes bristling with swaying yellow grasses, backed by the darker green of forests.

We explored this world by day, and at night we retired to our little rented cottage in the woods, where I opened a bottle of Störtebeker Atlantic Ale and switched on the television.

“Her TV seems to get only Hitler.” 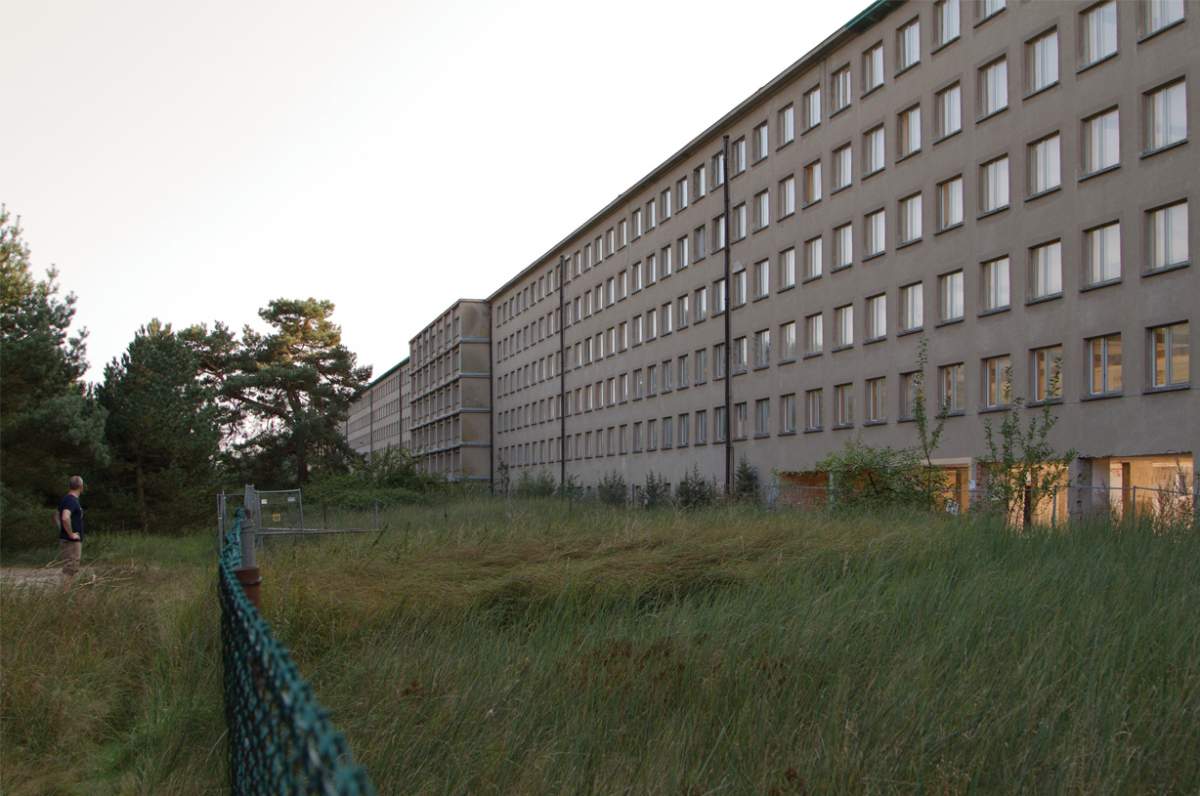 At five kilometres long, Prora is the largest Third Reich building in existence

The German history channel had been showing documentaries about the Nazi period for the past two nights, and I couldn’t switch it off. In reality, I just didn’t know how to work the thing, with it’s complicated array of remote controls. But it was a strange coincidence, given that we were 20 minutes away from one of the most bizarre remaining traces of the Third Reich.

It’s known as the Colossus of Rügen, and it was meant to be a massive Nazi vacation resort. Yes, you read that right. The idea of going somewhere simply for leisure was still a relatively new phenomenon in the early 1930s. Mass tourism was in its infancy, and the Nazis wanted to twist it to their advantage. The point wasn’t just to keep the masses happy while tightening their grip on power. The Nazis sought to take over every facet of their subject’s lives. Leisure time would be directed, too. Orchestrated for the masses, and used to strengthen them in body and soul in preparation for war.

And so the organization “Kraft durch Freude,” or KdF, came into being. It stood for Strength Through Joy, and it was devoted to managing the free time of the working German. The KdF organized everything from cruises, ski trips, hikes and beach vacations, and in 1935 they hit upon the idea of building seaside resorts.

Their aim was to accommodate 14 million people for one week each year. Five such resorts were planned, but only one was ever started, on a beautiful stretch of beach called Prora Wiek on the island of Rügen. 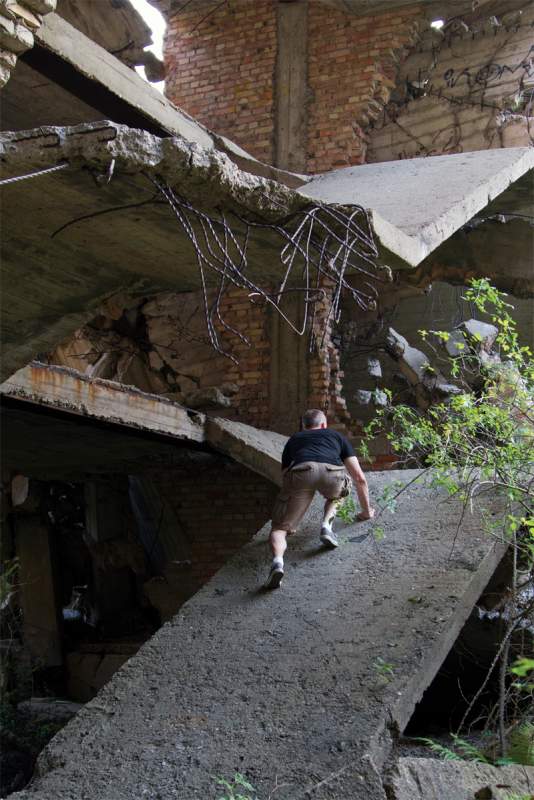 The so-called Colossus of Prora remains the largest Third Reich building in existence. It would house 20,000 people in a curving set of dormitory buildings that stretched for almost five kilometres down the shore. Each 16-by-eight-foot room faced the beach, and was fitted with two beds, a wardrobe and a sink—and of course, a loudspeaker blaring military music and propaganda. The housing sections were joined by community buildings, swimming halls, restaurants, cinemas and sports halls. But the buildings were blocky and bleak, and they felt more like a prison than an escape.

Prora had reached various stages of completion by the time Hitler invaded Poland and started the Second World War, but resources were needed elsewhere and construction was stopped. After the war it was occupied by the Soviet military, who stripped most of the buildings of useable material. They tried to demolish large sections too, but the reinforced concrete construction made it far too difficult to be worth pursuing.

By the time the Berlin Wall fell, Prora was largely derelict, a haunt for urban explorers and a massive concrete badge of shame. Over the years, parts of the complex were used as a youth hostel and dance club, and a Documentation Centre about the facility and the KdF occupied one floor. In 2005, a large part of the complex was sold to developers, and by the time of our visit they had already begun transforming an entire residential block into luxury condominiums. Prora would provide vacations for the workers after all, but without the propaganda and with little trace of the past.

We spent several hours in the Documentation Centre reading about the dark history of this place, and we poked around the remaining structures, kicking our way through tall grass and sand and scattered litter; but something was missing. 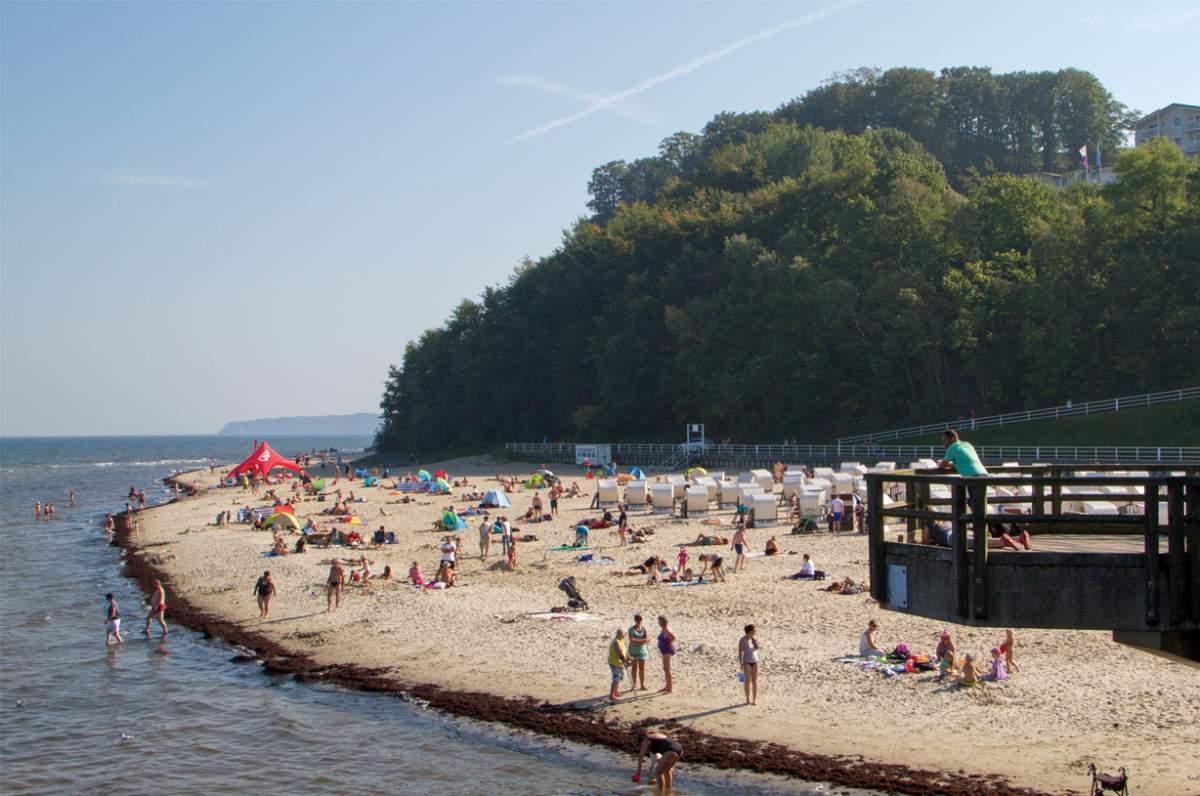 The beach at Sellin is an island favourite

I consulted satellite imagery on Google Earth that night, and we went back a day later to explore the shattered northern blocks, the ones the Soviets had tried to destroy. They were completely overgrown by forest and surrounded by a tall barrier fence, but I found a place where a section of wire had been deliberately removed.

The main concrete frames of the north wing were still standing, but the staircases were in dramatic states of semi-collapse. We crept along them carefully, testing our footing, exploring the shattered hulk one floor at a time, until we reached the highest level and looked out over the trees to the grey Baltic Sea.

I liked Prora better this way: with the confining walls smashed out. Those walls would have hemmed in the mind like an ideology, as speakers nagged the weary vacationer with words that shouted the party view.

The structure of Prora mirrored the society that shaped it, and became one vast prison of the mind. You see, prisons aren’t only formed with walls. Thoughts and actions have walls too, and they channel us into patterns that only become visible when we take an architectural view. 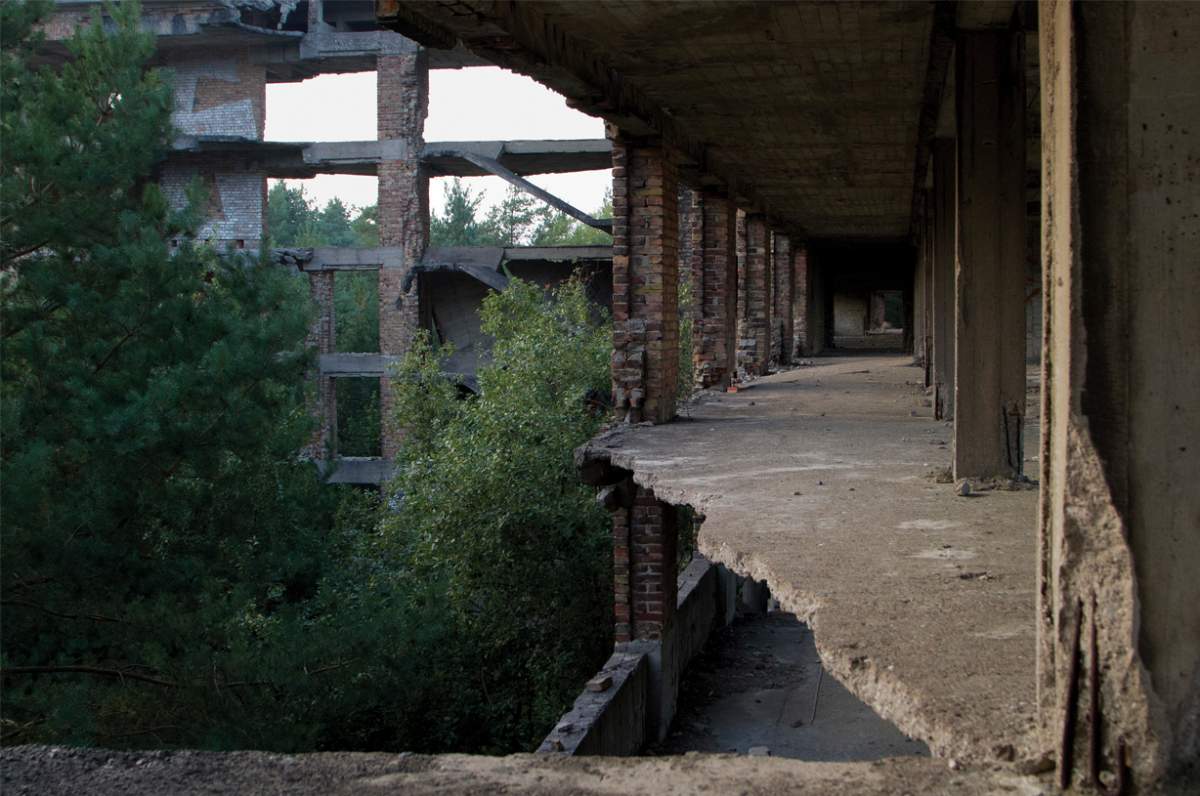 Perhaps that’s why FKK made a resurgence in the DDR—the communist East—during the years of a divided Germany. The East Germans saw naturism as a way to break out of those prisons of the mind. It was the one public activity the government had no control over. Radical socialists even saw it as a way to break down class barriers. You shed your inhibitions with your clothes, and with them your visible social role. Reconnecting with nature reminds us of our place in the world.

After sinking into the darkness of history, nature was exactly what we needed. We threw a couple towels in the back of the car and a couple cold cans of beer, and drove north to where the best beach on the island—the Schaabe—curves a 10-kilometre parenthesis between the peninsulas of Jasmund and Wittaw. Here a thin line of forest is flanked by the softest sand dunes, anchored by long yellowing blades of grass that wave like kelp in the breeze.

I pulled the car to the side of the road and we set off through the trees. We kicked off our shoes when we reached the sand, and let its soft cool grains cover our feet. The contrail of an airplane bisected the sky as we made our way to a quiet spot on the shore. The air was as clear as schnapps, and the wind caressed our skin. We were firmly within FKK country, and so we slipped off our shorts and walked slowly into the cold Baltic waves.