Running in Peru | From Oceanic Wrap-Arounds to High-Altitude Trails!

Whether you like sea-level runs on pavement or high-altitude grinding climbs, there are so many options for running in Peru it really comes down to just picking a spot. Here’s a few to get you started:

Millions of years ago, before homo sapiens roamed this Earth, our early ancestors began evolving from foragers to persistence-hunters in the open savannahs of Africa, using a combo of chasing and tracking prey to exhaustion.

Part of the transformation that made persistence-hunting possible was evolving from moving around on all fours to becoming bonafide bipeds — including, of course, learning to run on two feet. The ability to sweat to regulate temperature, bigger glutes, and shorter toes were all evolutionary traits that helped make humans efficient runners.

It’s difficult to say precisely when humans went from running for our supper (or our lives!) to running for fitness and the sheer joy of it — suffice it to say, we are here now, and recreational running has become a big deal, including for people like me, who travel the world just so we can run in exceptionally beautiful locales like Peru. 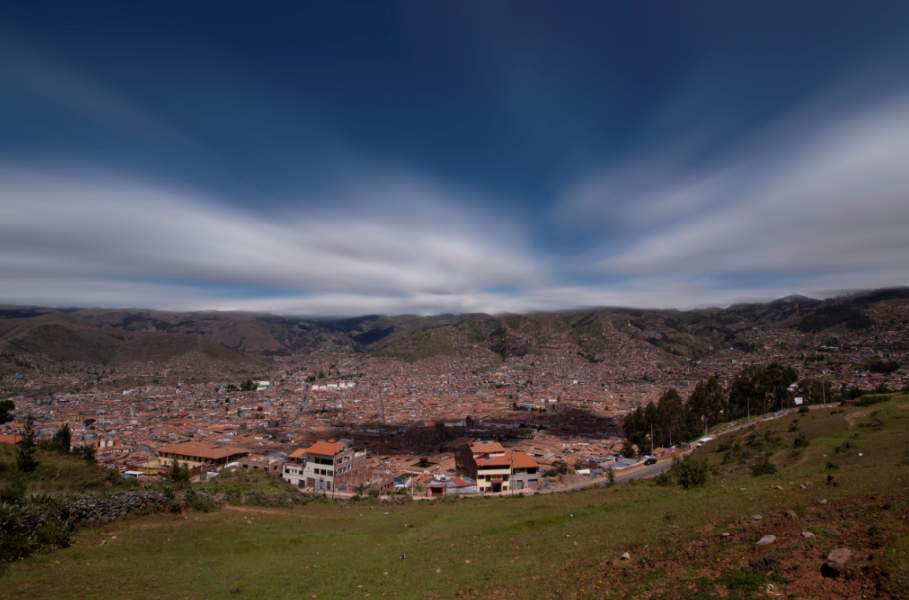 In Peru, many cities and communities lie in the Andean foothills, and offer spectacular places to run. (Outpost Travel Media)

Yet not all terrain is truly runnable — unless you are one of those tremendously gifted beings that eat up high-altitude technical trails for breakfast (a club I don’t belong to). Needless to say, runnability is an important factor when selecting a route, whether at home or abroad. In an urban setting runnability may have more to do with crowded streets, traffic, and air quality, while in the hills or mountains it may be about steepness, altitude, and the type of terrain underfoot — be it sharp rocks, slippery tree roots, or smooth hard-packed ground.

Whether you prefer flat, sea-level runs on pavement or steep grinding high-altitude climbs, this post will get your heart pumping with some awesome road and trail runs found throughout Peru.

Despite Lima’s mighty expanse, there are lots of great spots to run in the city, including along the Costa Verde. In the Miraflores neighbourhood at the west end of the city (right along the Pacific Coast), there’s a long, paved pedestrian path that passes through lovely parks, with views out over the ocean. 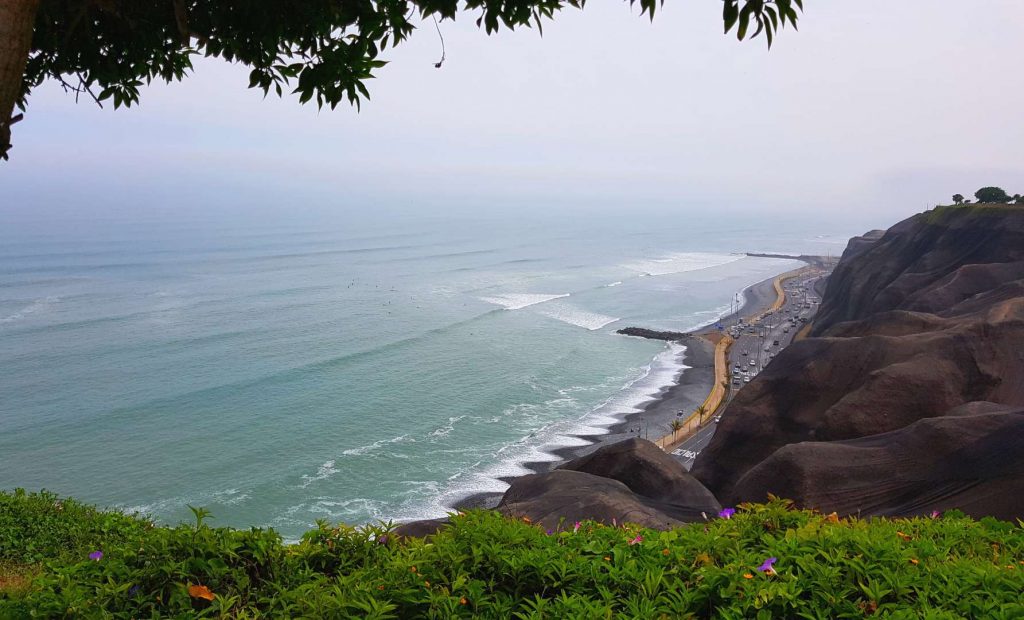 The Pacific wraps Lima on its west end, and the views while running are spectacular! (Outpost Travel Media)

You can easily go for a 10-kilometre run up and down the coast without having to deal with car traffic, and with spectacular views of the ocean. You’ll be sharing the paths with cyclists and pedestrians, so don’t zone out too much. 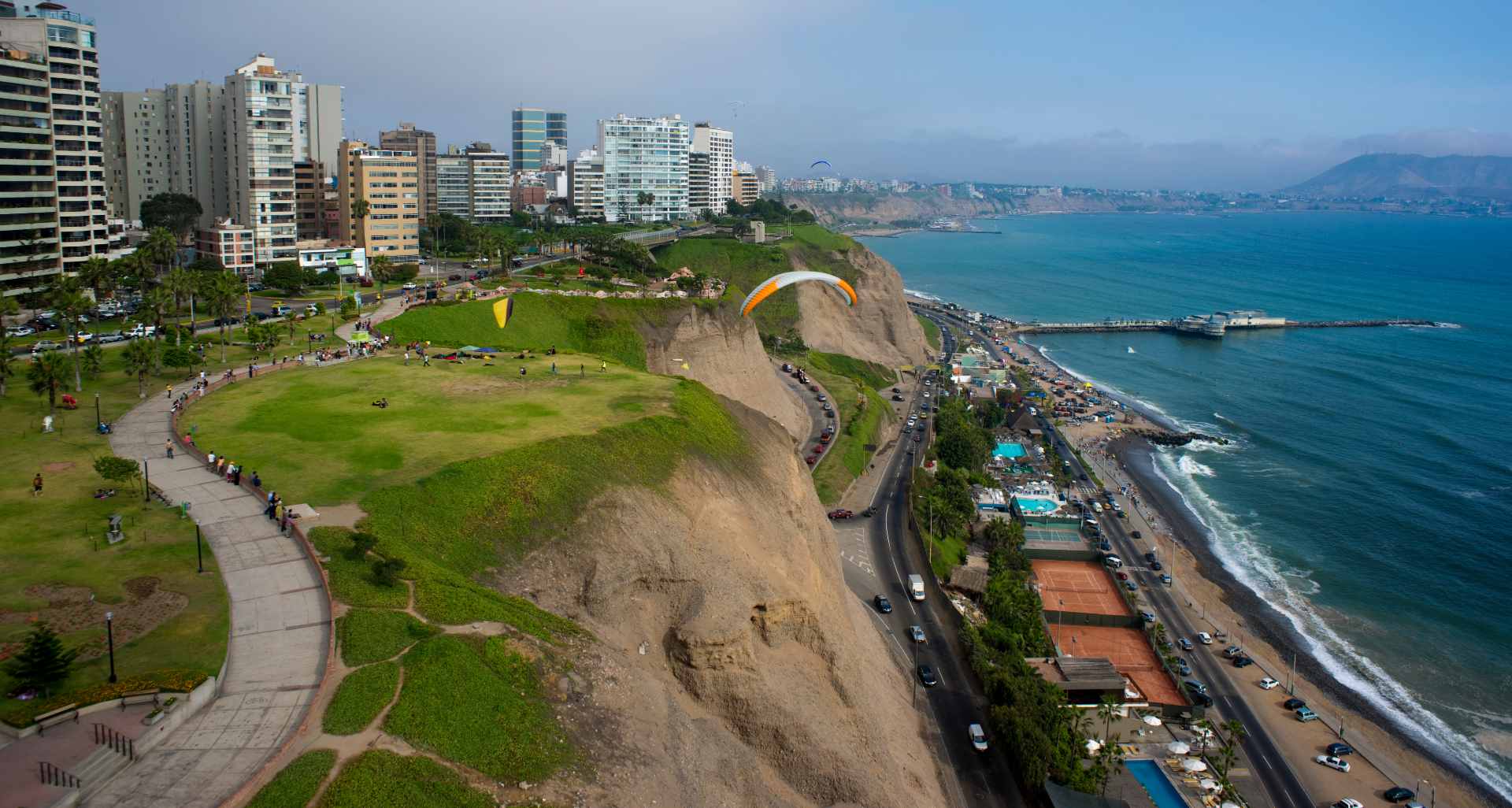 The footpath and boardwalk on the Pacific Coast in Lima is ideal for running. (C. Ibarra/PromPeru)

In the district of La Molina on the eastern edge of Lima, when the road turns from concrete to dirt, you know you have arrived at Parque Ecológico de la Molina. A popular destination among local mountain bikers and trail runners alike, several trails can either take you along the lower foothills, or up and over the steeper slopes. This is a neat destination if you’re in Lima, and you want to get some hill training in before, say, heading to the heady heights of the Andes.

This 7-kilometre-loop trail departing from the northern flanks of the Andean city of Cusco is considered a moderately-challenging course, with about 300 metres of height gained. The run starts at 3,400 metres — which means everything is going to feel a lot harder than it would at sea-level. The trail passes by Templo de la Luna (Temple of the Moon), an ancient Inca temple dedicated to fertility, and Inkilltambo, an archeological site. Expect to be wowed by the fantabulous vistas, while you catch your breath. 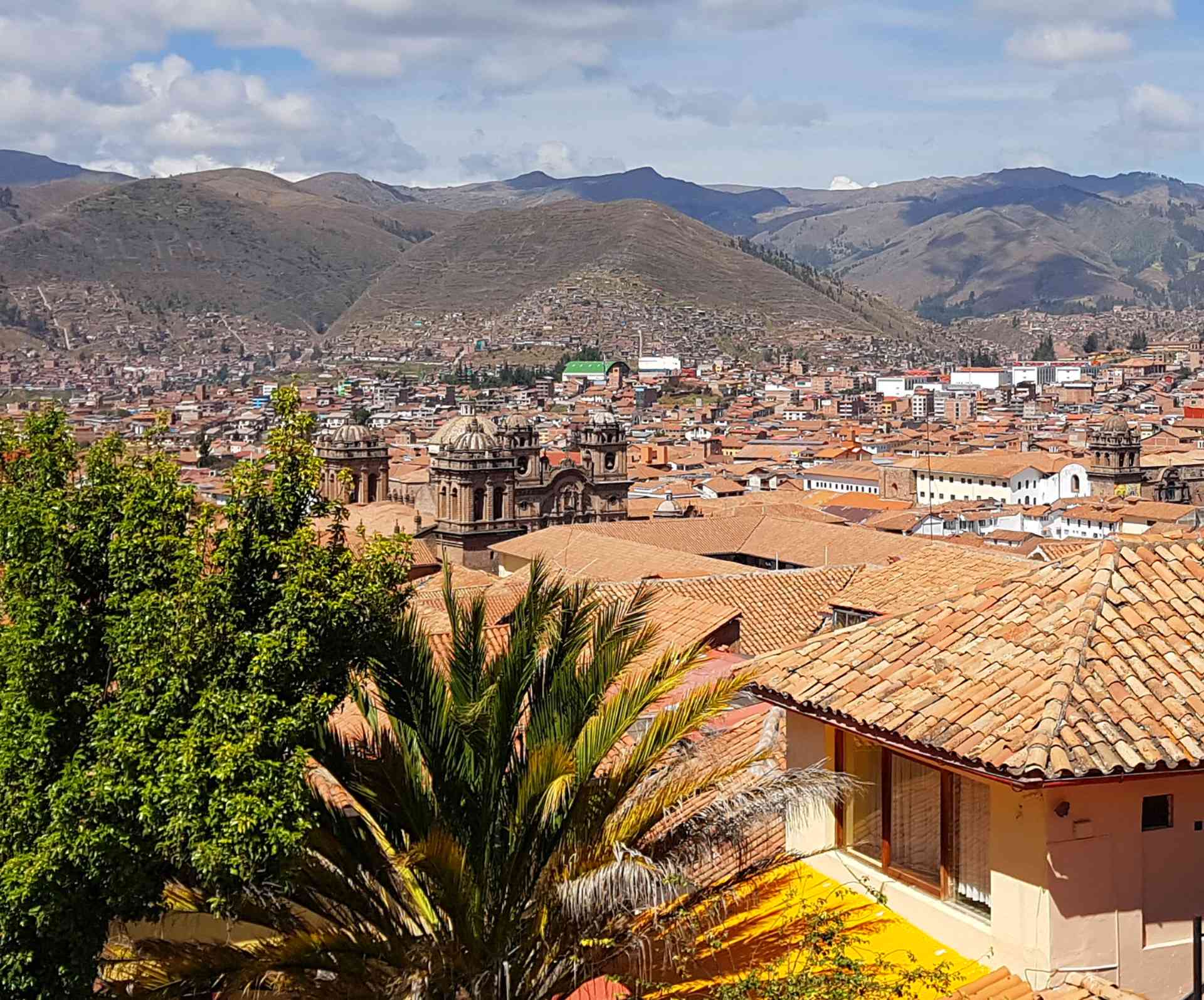 Vista of Cusco, where running in the Andean city’s borderlands is popular. (Outpost Travel Media)

I can’t emphasize enough the infinite possibilities of trail running in Peru. This 30-kilometre route spotted on the trail-running routes website www.wikiloc.com looks pretty fun, travelling through the earthy brown mountains and valleys of the lower Andes. It’s a point-to-point trail run from town to town that starts in Santa Rosa de Callahuanca, just off the LM-116 Highway which runs east of Lima. The trail includes about 2,400 metres of ascending, with a starting altitude of 1,595 metres. If you fancy a longer run, you can also yo-yo the route, and double-up on your mileage.

This 21-kilometre route is extreme not for its length but for its altitude. It starts high above the city of Arequipa at 4,690 metres and climbs to a staggering 6,075 metres above sea-level, right to the summit of Chachani volcano. At that altitude, don’t expect to be doing much running until you’re heading back down with the help of gravity. 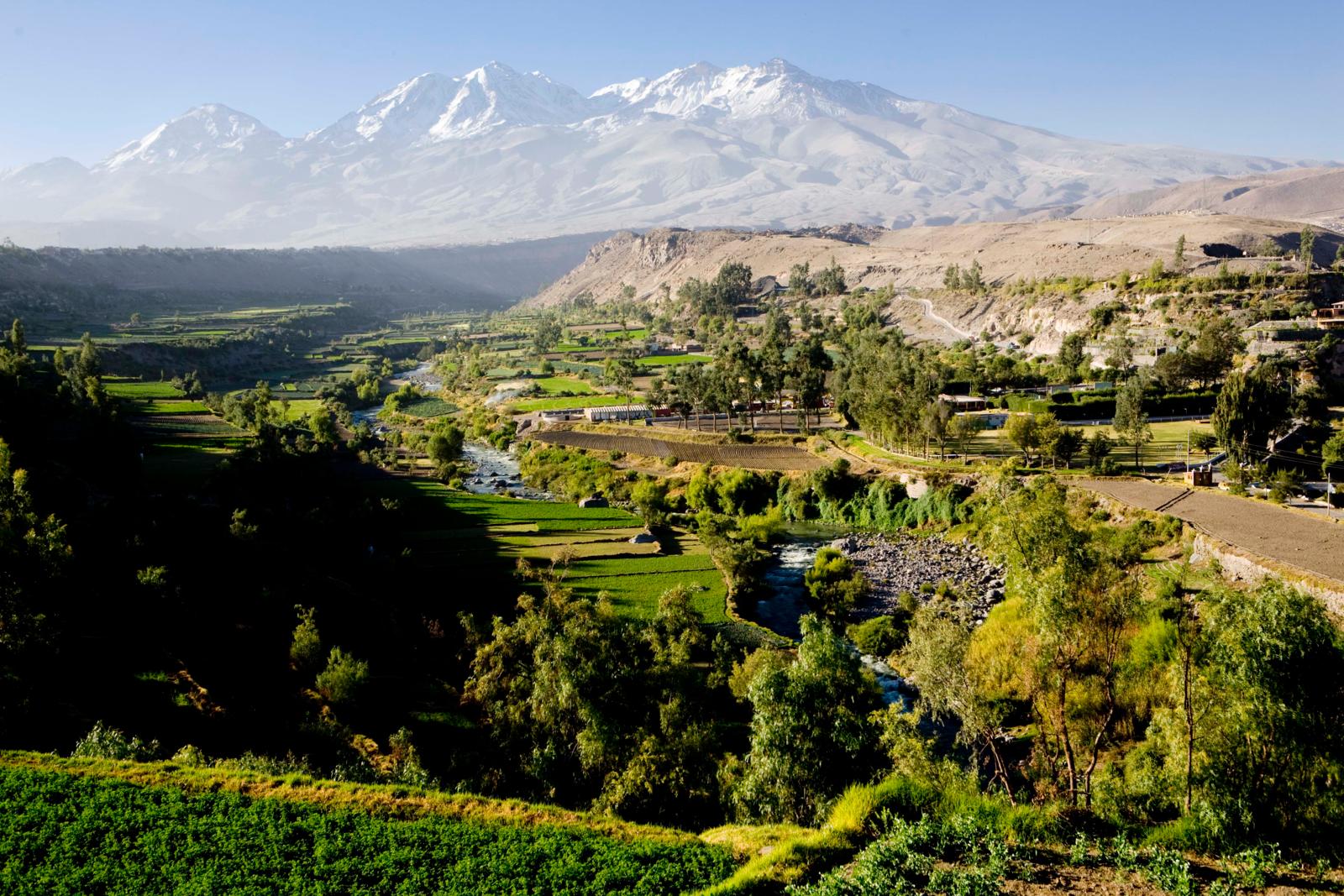 This lunar-like trail is also a racecourse for Chachani Trail Extremo, which usually takes place in November. The race organizers insist that if you live at sea level you must acclimatize in Arequipa for at least three days (the longer the better, I say!).

Running in Peru is More Popular Than Ever

In more recent years, the running community has become so large and so global that almost no matter where you go, there are websites and blogs dedicated to that corner of the world to which you venture. Wikiloc (www.wikiloc.com) is a website that features multi-use trails around the world, including thousands of trails mapped out all over Peru that include downloadable coordinates (mostly uploaded by individual runners and race organizers). Here’s the link to trails in Peru: https://www.wikiloc.com/trails/trail-running/peru.

Most hiking trails can, potentially, also be run — so check out my previous story on trekking in Peru for more trail-running ideas. And, if group-touring or an organized trip is your preferred way of travelling, check out the plethora of travel operators that specifically offer running trips to Peru. 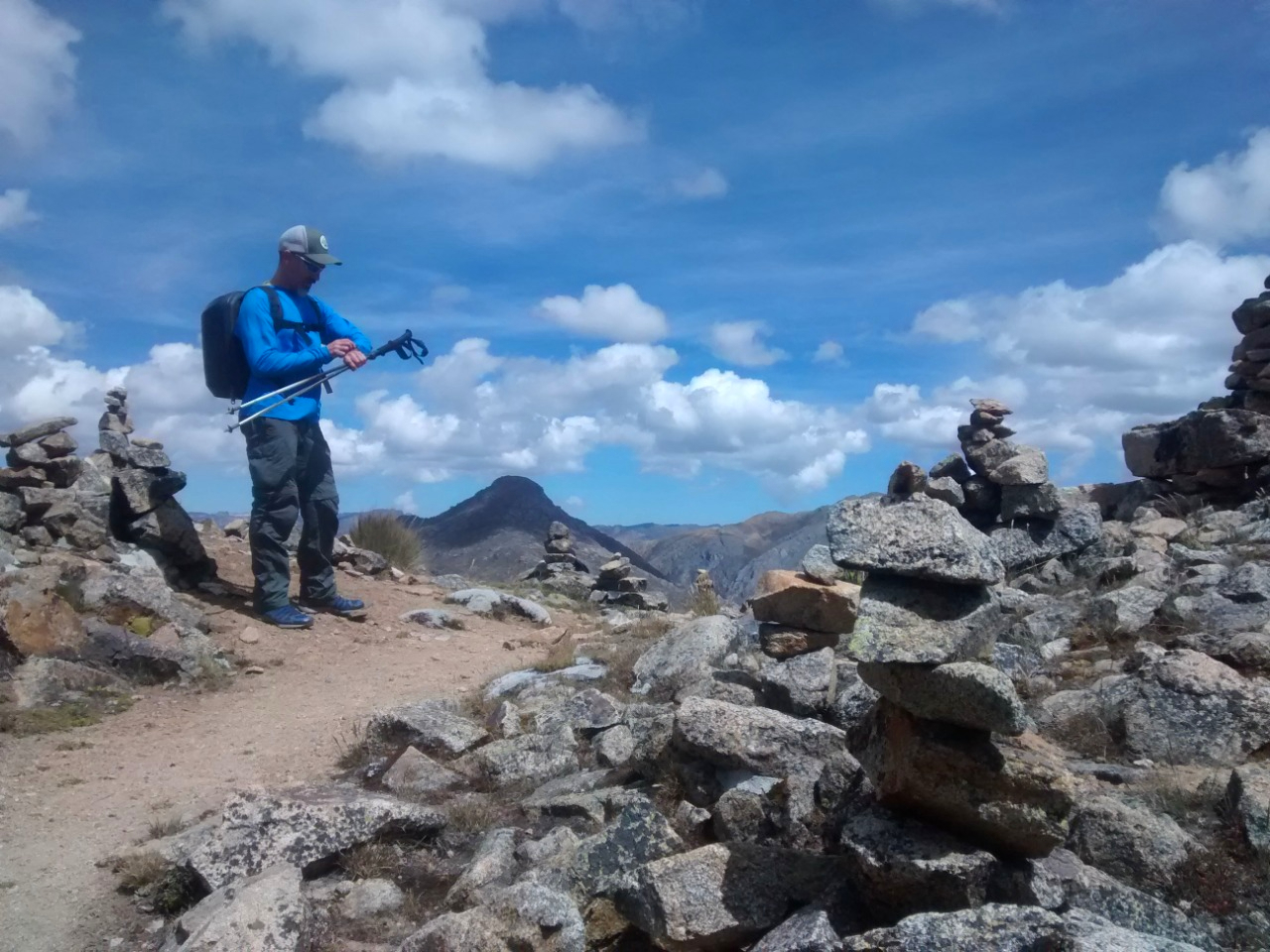 An another note, when Team Outpost was in Peru, we were lucky enough to have Peruvian runner-extraordinaire Domingo Elias Townsend as part of our local guiding team, who’s also part of the Peruvian (and especially, Lima) runners’ community. Among his many activities, he also volunteers with a fantastic association that helps physically- and visually-impaired runners and athletes — it’s called YoSoySusOjos — check them out here, they do awesome work!

Finally, running in the mountains involves a certain amount of risk, so always pack for extreme weather, and don’t let your hubris overreach your skill or fitness level. Be safe out there, people! ♦

The Tea Sessions with Jeff Fuchs | Bowls of Tea, Hands of Stone in the Himalayas

Peru is a Bedrock of Hot Springs and Thermal Baths!

Problem with your article running in Peru is no mention if dogs. Living in Peru for 10 years I can tell you dogs are a big problem and can bite and some do carry rabies.