Curious about the best hidden gems in Malta? From steep cliffs to abandoned forts, look no further.

In a previous column I told you about some places you really must see if you’re coming to Malta.  Well, I’ve gotta be honest with you… That was just the tip of the iceberg.

Any expat will have a list of secret places that they’ve discovered during their years as a foreign resident. Magical little corners of a place where you can find something very unique, often completely alone.

Now, of course, they aren’t really secret at all. Local people probably know about them. But they aren’t on the tourist radar, either—or at least at the top of the list.

I’ve been asked to share a few of my favourite secret places with you today. If you come to Malta and make an effort to visit these places, you’ll experience a deeper side of the island that the main tourist sites just won’t reveal. They aren’t visited nearly as much as they should be. And each will provide an experience that you’ll treasure long after you’ve gone.

The Victoria Lines are a 12-km long series of fortifications that cut across the island of Malta from coast to coast, along a steep escarpment called The Great Fault. They were built by the British between 1870 and 1899, to defend the main part of the island from a landing and invasion in the north.

You see, the Grand Harbour became the Royal Navy’s most important Mediterranean base when the Suez Canal opened in 1869. And so The Brits needed a defensive perimeter which would keep potential enemies at a distance from the Harbour—preferably beyond artillery range.

Most of the Lines have since crumbled into ruin. But you can still walk their length, exploring 3 of the 4 principal forts, the gun batteries and the remains of the long infantry rampart. You’ll also be passing through some of the most scenic landscapes in the country.

Don’t have time to walk the entire way? You can walk a section of it instead. The stretch near Mosta has especially nice views.

If I had to choose a single secret place on Malta, this little wild region below the cliffs would be it. It was revealed to me one sunny spring day by an actual explorer, a guy I’d been on expedition with in Sudan.

We climbed down a steep hillside on a footpath made by hunters, and walked along the smooth worn stone at the top of the cliffs. We had to pick our way down a section of steps cut into the rock, holding a worn knotted rope in one hand. And at one point we leaped over a narrow inlet where the sea crept a finger into the shore far below.

There were salt pans, boreholes, and a narrow passageway carved into the rock. No one knows how old the system is, but crystals of salt still collect in the sun when the sea is heaving and spumes of water spray over the flats through these deep man made holes.

Blata tal-Melh is an isolated place, with views of the cliffs in both directions, and Gozo in the hazy distance. Wind and solitude and mists of salt spray. Plunging depths inhabited by pelagic fish like tuna and shark. A plaque on the rock in memory of a man who was swept away by heavy seas in the 1960’s. And nature—something all too rare on this tiny island, unless you know where to look.

Up above, you’ll find the isolated promontory of Ras Ir-Raheb. This flat point surrounded by sheer cliffs has been a sacred site since ancient times. And it has what might just be the most incredible views in all of Malta.

The megaliths have been incorporated into a later ancient site, and the foundations of a building begin on the seaward side, mostly covered in grass. A courtyard is clearly visible, surrounded by a wide corridor with a room branching off. There’s a rock cut cistern too, and I could see the shine of water far below in the darkness.

No one’s quite certain what this site was, but some incredible artifacts were unearthed here, including: an ivory plaque with a crouching boar that has been traced to 5th century Etruria; a pair of clay satyr masks; and a male figure with a lion skin tied around his waist, most likely representing Hercules.

Coins were also found on the site from the Sicilian Punic period, as well as a late Roman coin depicting Constantine II (337-361 AD).

It’s an amazing place to explore, in a very remote corner of the island. Unfortunately, this site of great historical importance isn’t very easy to access.

Part of the path out here crosses the private land of a local farmer, and aggressive hunters have taken over the rest. If you go there, do take care.

Deep in the rock beneath Valletta’s massive St. Peter and St. Paul bastions lies a forgotten World War Two site. This tiny island was one of the most heavily bombed places in Europe, suffering 3,340 air raids over a 3 year span—often multiple times per day. It would have been much worse, if not for the brilliant air defence system housed in Lascaris.

The Lascaris War Rooms formed the top secret centralized war headquarters for the entire air defence of Malta. Builders tunnelled into the rock beneath the Upper Barrakka Gardens by expanding an old communications tunnel from the time of the Knights of St. John.

The underground operations room coordinated data from the 6 radar stations across the island, and plotted aircraft positions on an enormous map table, updated by radio every 5 minutes. Anti-aircraft gun operations were directed from here in combination with fighter sorties by the British RAF.

The site is being restored by Fondazzjoni Wirt Artna (the Malta Heritage Trust), which took it over in 2009. They run an excellent tour of the Lascaris War Rooms, and their incredibly knowledgeable guides bring the Second World War to life. I highly recommend it.

Soak Up Views of Filfla from a Park in Zurrieq

Everyone seems to visit the Blue Grotto for views across the sea to the tiny rocky islet of Filfla. But there’s a much more peaceful place to take in that scene.

Venture into the lovely village of Zurrieq, and go to the top of the hill above my house. That’s where you’ll find the nicest park in Malta. It’s clean, and there are plaques with explanations of the landscape stretched out before you—not just Filfla and the sea, but Dingli Cliffs in the distance, Mdina on a far off hill, and even the Grand Harbour and Valletta.

There are benches too, and you can position yourself in the sun or the shade. Bring a thermos of coffee, or pop into the Bocci Club Bar and buy a bottle of beer from Paul. He doesn’t mind if you take it outside and sip it in silence as you look out across one of the best views on the island.

If you go there on a weekday afternoon, you’ll probably be alone.

Looking for somewhere to pass a quiet Sunday afternoon when everything else in Malta is closed? Then why not get a taste of the upper class past in the Baroque Palazzo Parisio in Naxxar? 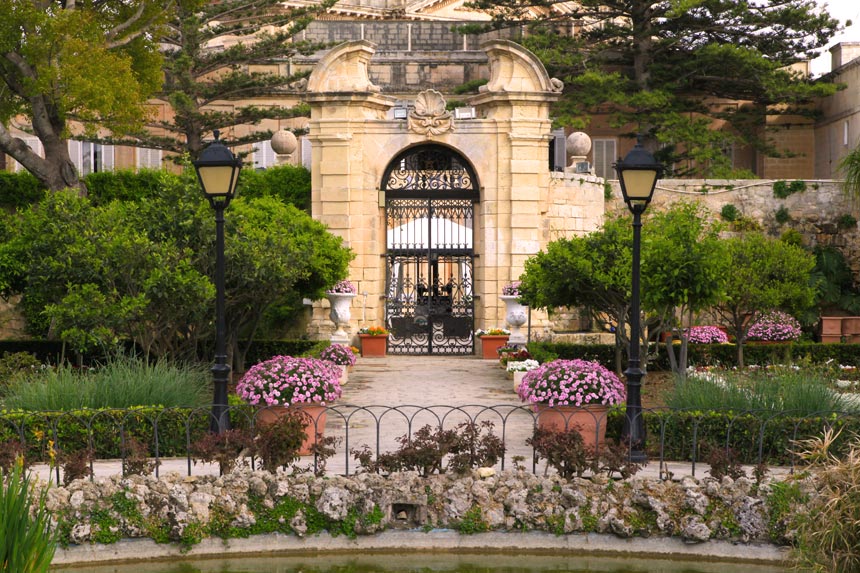 The cafe serves a lovely traditional afternoon tea, with thin finger sandwiches, and scones with clotted cream. And when you’re finished dining in regal elegance, you can stroll through the palazzo’s extensive gardens, or take a rather expensive tour of the upper floors.

Explore the Remains of Fort Campbell

Fort Campbell was built by the British between 1937 and 1938, on a lonely peninsula behind the abandoned Selmun Palace hotel. It was the last major fortification to be constructed in Malta.

It’s unique among the military installations on the island because it was built at a time when the greatest threat had changed. The enemy would no longer come solely across the sea. They would also drop bombs from above. And so this new defensive structure was designed to blend with natural surroundings, so it would appear inconspicuous from the air.

Today Fort Campbell is a silent place, protected by a tall boundary wall, and when I went there I was entirely alone. The fort is abandoned, and many of the rooms are falling in, heaped with litter and the empty bottles of vandals.

Fort Campbell also has fantastic views over the sea and St. Paul’s Islands. And if you’re up for a walk, you can stumble down the hillside for a swim.

Salam East African Bar is my favourite restaurant in Malta. And you’ll never stumble across this place as an outsider, because you would have no reason to go to Hamrun.

It’s a little piece of Africa in Malta’s backstreets, where you’ll find wonderful people, and the best Eritrean food this side of the Horn of Africa. Give them a call to book ahead. And be sure to tell them Ryan and Tomoko sent you.

Take a Walk Below Valletta

Walk to the very end of Valletta. You’ll find yourself standing next to what is now the Mediterranean Conference Centre—the 16th century hospital of the Order of St. John, Sacra Infermeria.

Cross the road, but don’t go into the Malta Experience. You’re looking for a set of steps just to the right of the cafe. It leads down below the bastions. If you follow it, you’ll pass a few fisherman’s shacks and boathouses, and you’ll end up at a peaceful quay next to the sea, below Valletta’s mighty walls.

This is one of my favourite hidden places for a walk, or just for a bit of solitude when cruise ship passengers are clogging up the narrow city streets.

If you’re wandering around that area, be sure to pop by Fort St. Elmo if it’s open too. This fort predated the establishment of the city of Valletta, and it played a pivotal role in the Great Siege of 1565.

So there you have it. A few of my favourite local escapes after 5 years of Mediterranean island life. I hope you find these places as magical as I do.

Have YOU been to Malta and Gozo? What was your favourite place, site or experience? Please share your recommendations with me in the comments below.

Found and followed the stairs in Valletta….loved it so much… untill some loud Italian family followed the trail (or me?!) as well and felt it neccessary ro set next to were I was sitting!🤤But thank you for sharing 😋

I agree with you! It’s worth to go own ways during the holiday, not only in Malta, but anywhere !
The so-called tourist attractions are mostly crowded and full of noises, which distrurb you in seeing the real value of this places.
I also preferer rather hidden corders and treasures than popular one’s!