If there’s one cheap indulgence I’ve loved most in my life, it’s been the long, hot shower, letting water pound my back and shoulders, as hot as possible, for half an hour or more without realizing that any time had passed.

I’ve always appreciated the luxury of endless water, knowing there were places around the world where access to any clean water required long journeys and laborious schlepping of heavy jugs, and I’ve been consciously grateful, considering my good fortune as the scalding streams relaxed my muscles and emptied my mind.

But I still considered the indulgence cheap and the supply endless, because my water costs little in the way of cash and the City of New York will never cut off my shower’s stream. Of course, cost involves much more than money, and the idea that just about anything is endless is an illusion. And so, like many trips I’ve taken, my recent trip to Cape Town, South Africa, shattered a few more of my life’s major delusions.

Cape Town is a cosmopolitan city, the legislative capital of South Africa (a country that uniquely has three capital cities) and home to 3.8 million people. It’s certainly not New York City, but it’s not a remote desert village either, yet it’s nearly out of water. 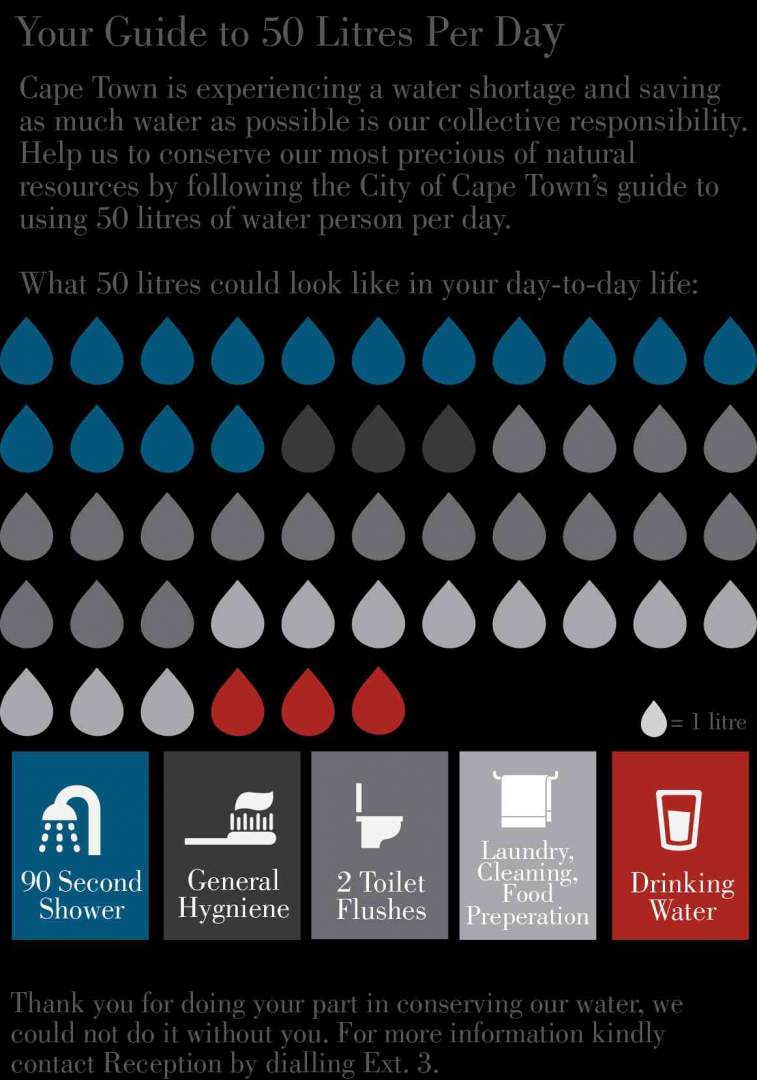 So near, in fact, that in January of this year (2018) city officials calculated what they termed Day 0: the day on which the water supply would be so depleted that water taps would be turned off and residents would be forced to wait in line for a daily allowance of 25 litres. It’s the stuff of post-apocalyptic fiction, and that day wasn’t a generation, or even a year, away. It was foretold to be April 21, 2018—a mere three months out.

Cape Town has always been a city defined and supported by water. It’s a harbour city, established in 1652 by the Dutch East India Company as a way station en route to Asia. It’s the dramatic setting where the South Atlantic meets the Indian Ocean, giving rise to restaurants, an aquarium, a marathon, and countless businesses all named Two Oceans.

The picturesque and vast Victoria & Alfred (V&A) Waterfront along Table Bay Harbour is one of the most visited attractions in Africa (yes, all of Africa!), drawing 23 million annual tourists. Hundreds of thousands take the ferry to Robben Island each year to view the cell where Nelson Mandela spent 18 of his 27 captive years as a political prisoner.

But with little water left to drink in Cape Town today, it’s the Rime of the Ancient Mariner come to life: “Water, water, everywhere, Nor any drop to drink.”

Exactly how a major city ran out of water is a complicated confluence of natural and human influences that are hotly debated but, in its simplest explanation, can be boiled down to two mammoth factors: drought and waste.

Cape Town has been in severe drought since 2015, leaving the city’s six primary dams unreplenished for years. It’s the worst drought since at least 1933, when relevant data was first collected and, while scientists estimate a drought of this level may strike Cape Town roughly every 300 years, it’s been dubbed the drought of the millennium. 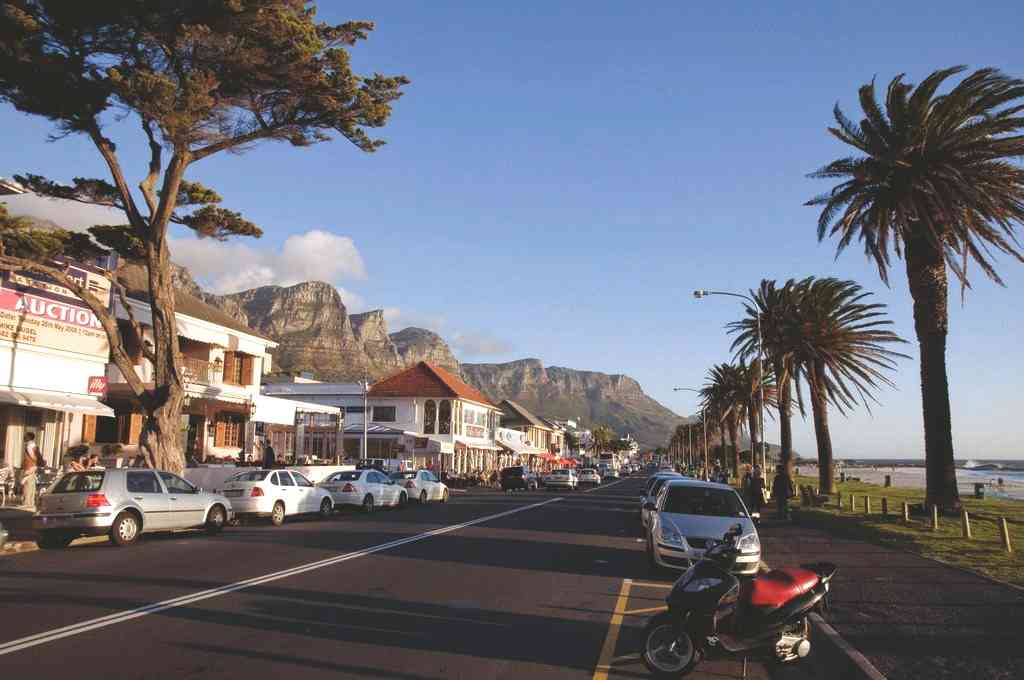 Camp’s Bay on the ocean’s coast, despite the inland water shortage.

Conversely, Cape Town’s population has come close to doubling in the past two decades, and the city’s agricultural industry (heavily dependent on water) and excessive corporate and personal usage have played no small part in diminishing the supply. It’s important to note that the word “excessive” here, isn’t a judgment against Cape Town. It’s a usage level no different than that of most other major cities, which is to say we’re all using excessive amounts of water.

The announcement of Day 0 terrified residents, but it also galvanized Cape Town’s efforts to decrease daily usage, and helped bring totals down from a record 1.2 billion litres per day to its current level of around 550 million litres. That’s a drop of more than half, and it’s overwhelmingly impressive. Obvious water wasters like swimming pools and car washing were banned, restrictive devices were implemented at high-use residences to limit individual waste, and water pressure was decreased in many areas citywide (a technique called “throttling”).

In the past few years, residents have been asked to reduce their personal usage to ever-shrinking levels, and the Day 0 threat brought a mandate of 50 litres per day.

By March, Day 0 was officially moved to 2019. The citywide effort to drastically reduce water usage was deemed successful enough to delay disaster by a year, but daily usage still needs to fall to about 450 million litres per day if Day 0 is to be postponed further without an end to the drought.

Yet you’re not likely to hear of Day 0 again, even if these efforts fail. While the campaign was a practical success internally, it was a PR nightmare externally. Announcing to the world that taps would soon be turned off was no way to encourage development or tourism.

In 2014, before the drought, The New York Times named Cape Town the best place to visit in the world. It’s home to glamorous hotels, fine dining, impressive wildlife ranging from African penguins to the Big Five safari animals, and natural wonders like the mind-boggling Table Mountain.

But no one wants to travel to a place where they can’t get a glass of water (and no one wants to invest in business there either). Cape Town officials insist Day 0 was legitimate, not just a scare tactic, and it worked—but it had to go. 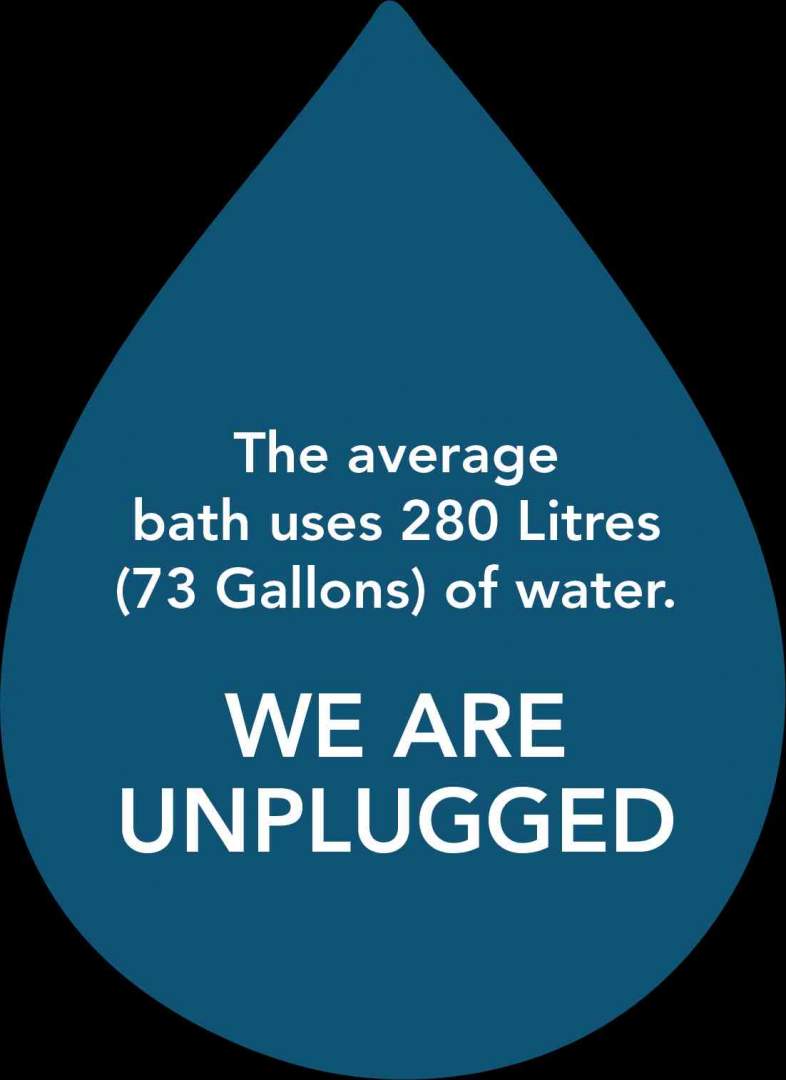 When I landed in Cape Town, the water shortage confronted me immediately. The urinals in the airport bathroom had no water, and the taps were turned off at the sinks. Signs on the mirrors directed me to hand-sanitizer dispensers. Thorough hand washing had been ingrained in my mind since childhood, and I felt almost criminal leaving the bathroom without soaping and scrubbing, but this soon became my new normal.

My natural instinct was to wonder if travelling to Cape Town was a selfish thing to do. Was I an unnecessary stress on the city’s water supply? Was I supporting an industry that would only sink the city faster? In my hotel bathroom, which was actually several rooms and nearly half the size of my entire NYC apartment, I found subtle but clear reminders of the crisis, and politely worded suggestions of how to “save like a local.”

To limit myself to 50 litres per day, I should continue to not wash my hands when sanitizers were available, my shower should not exceed 90 seconds (already accounting for a third of my meager allowance), baths were out of the question (this wasn’t a suggestion—the tap to my magnificent marble tub was turned off), and I should flush the toilet no more than twice per day.

“If it’s yellow, let it mellow” was no longer a crude commentary on fraternity life, but a sincere plea, even in a 5-star environment.

I felt sure a regimen this extreme meant that I shouldn’t have come to Cape Town to waste another 50 litres per day when nearly four million residents needed it—but, happily, there were a few major flaws in my assumption.

Tourism is a critical economic sector in Cape Town, accounting for more than 300,000 jobs and nearly $2.5 billion CDN in annual revenue. Still, during peak tourism season, it accounts for an increase of less than one percent to the city’s population. Therefore, the impact of travel on the city’s water supply is negligible and its effect on the city’s economy is great.

Next to running out of water, reducing travel to Cape Town is the last thing the city wants right now (hence that rapid removal of the Day 0 campaign). In effect, travelling to the region is a responsible and productive thing to do. Tourism dollars help Cape Town invest in technologies like desalination plants that make ocean water potable, and infrastructure upgrades like repairing leaky underground pipe systems. And, while there’s never a good time to eliminate more than a quarter million jobs, a time of crisis would certainly be among the worst.  My gut instinct that I should avoid Cape Town to help save it would actually have been a disservice to the city.

The other flaw in my assumption was that these restrictions were “extreme.” As a native of a country with a well-developed water system, I’m accustomed to a lifestyle of water waste. The ultimate proof of this is that American childhoods are filled with water as a plaything: water balloons, water pistols, swimming pools, and water parks are hallmarks of summer fun. 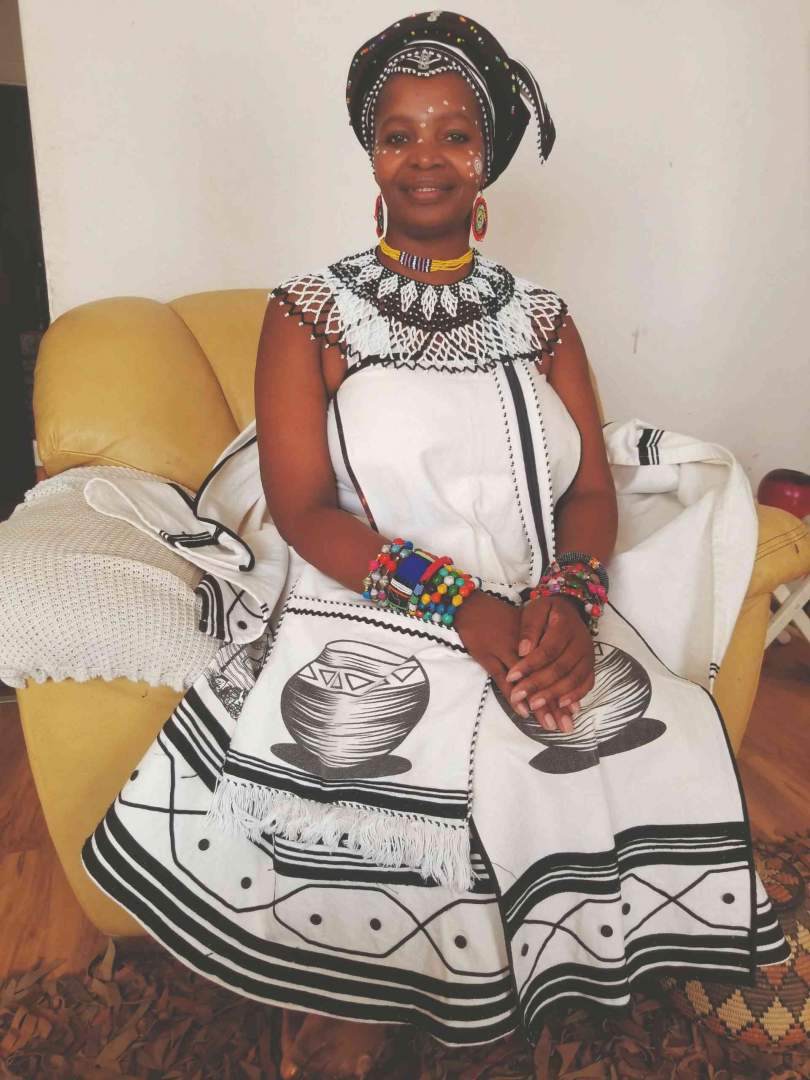 Nocawe, who depends on tourism for her livelihood.

The most severe admonishment of water waste I can recall from my youth was a song about not letting the water run while brushing my teeth, and I honestly thought this was more about protecting my parents’ water bill than the planet. I have lived so far at the opposite end of the water spectrum that just about any restriction would have elicited a double-take.

By the time I arrived in South Africa in my thirties, it certainly felt “extreme” for me to consider not washing my hands in the bathroom, but not because I was a jerk or a careless, wasteful person; it was simply that no part of my natural environment had ever prepared me for a reality where water even could run out. Encountering a capital city where it had essentially already happened was an abrupt wakeup call that hit me hard.

At the moment, it’s difficult for me to look at a swimming pool without feeling personal guilt, and sometimes even judgment toward others. I imagine this is something like what new vegans feel, until they find some inner balance and understanding. I do flush the toilet more than twice a day already, and my showers are probably getting increasingly longer with each passing week, but I don’t think they’ll ever return to the marathon scorchers of my past.

I don’t wash my hands quite as often now either, and I get anxious as I let the water heat up in the kitchen sink before starting to wash the dishes. It feels wasteful, but I can’t wash dishes in cold water and I can’t control how quickly my tap gets hot. I’m working on finding balance for myself, and on not becoming a preachy, soap-box bellower, because no one’s eyes or ears are open to that man, and because I don’t have the right to force anyone else’s hand anyway. 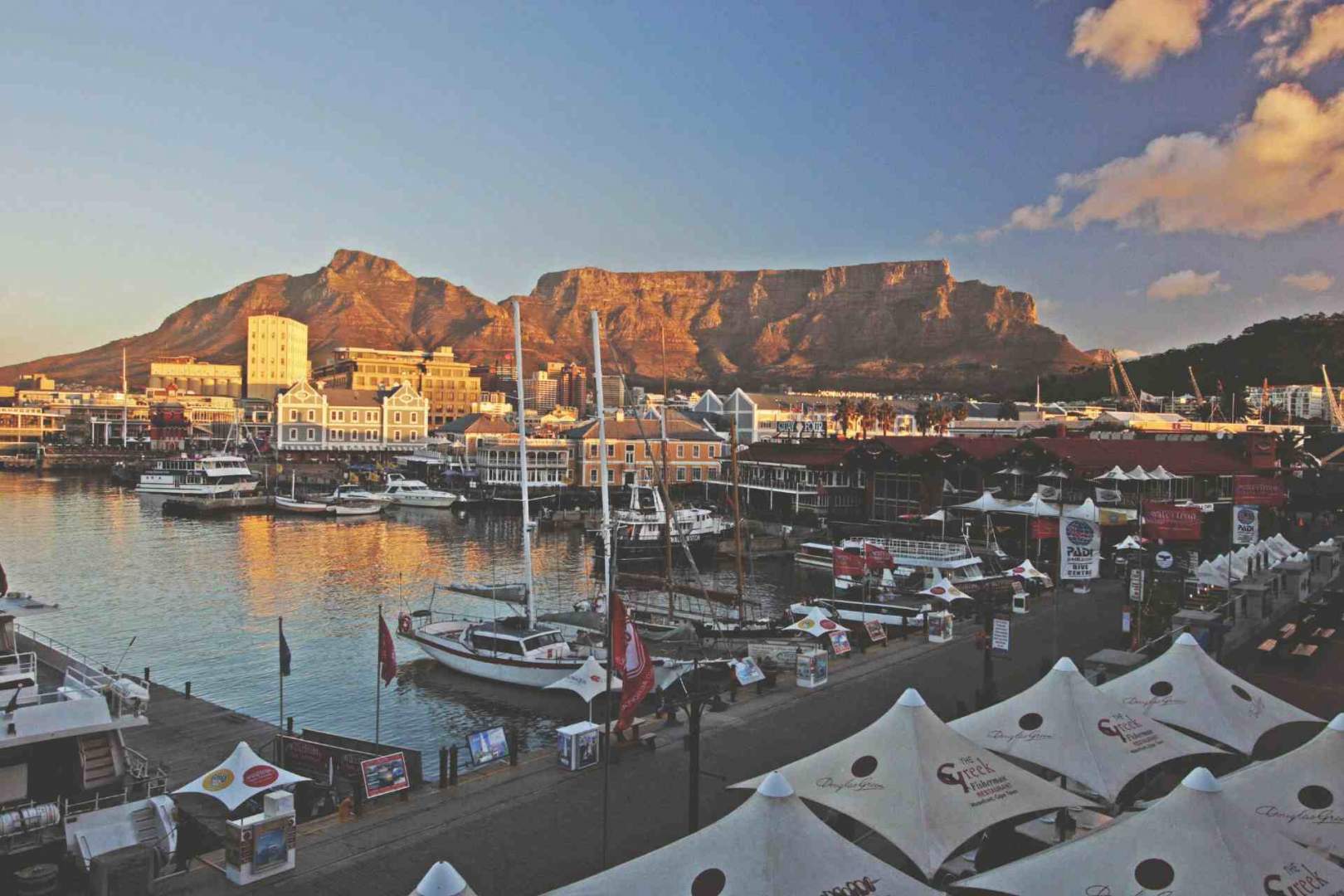 So I suppose the most reasonable way I can influence others to understand my new water reality is the same way I strive to change perspectives in most other ways: promoting travel.

Go to Cape Town for every stunning moment it offers, and also to confront what happens when a city runs out of water. Experience a first-world lifestyle that involves less water—much less water—without sacrificing quality, and see if your current notions of normalcy or necessity shift.

See the hope for a more sustainable future that has come from a resilient, creative city, incorporating both large-scale national change and individual commitment. And if you happen to feel compelled by anything you absorb, bring those ideas home.

The first sign I saw when I entered South Africa read, “This is a water scarce nation.” It echoed through my mind each day I was there, subtly altering my relationship with water by refocusing my attitude. I was a guest in a foreign land, and I couldn’t bear to waste its most valuable resource through my own carelessness.

And that awareness didn’t vanish when I returned home, because I realized that I may have left a water-scarce nation but I was living in a water-scarce world.