The Transcaucasian Trail: Georgia, Armenia, Azerbaijan | Spotlight Adventure for 2022 & Beyond

Spotlight Adventures & Destinations for 2022 & Beyond: after unprecedented lockdowns and at-home pastiming, open-air adventures have never looked so good.

A new mega-trail in the Caucasus Mountains region: the Transcaucasian Trail

Our next spotlight adventure 2022 pick might, as time goes on, be impacted by Putin’s continued illegal and immoral attempt to conquer Ukraine and other regions of Eastern Europe and Western Asia—but as of June 2022, the Government of Canada is not advising against travelling overall to this region, with some caveats (details here).

And while your personal safety should be paramount when selecting a travel destination, it’s also true that travelling creates more world interconnectedness and more multi-cultural understanding. (You can donate to help Ukrainians through the Canadian Red Cross here.)

The pandemic events of the last two years have buried this once-burgeoning story about the building of a new, world-class long-distance hiking route that can take trekkers through some absolutely astonishing landscapes of the South Caucasus region, a place where Europe meets Asia.

It’s well underway—has been since 2015—with great swaths already carved out and ready for trekkers. Eventually, it’s slated to stretch 3,000 kilometres right across the isthmus between the Black and the Caspian seas, and will link Armenia, Georgia and Azerbaijan by footpath. 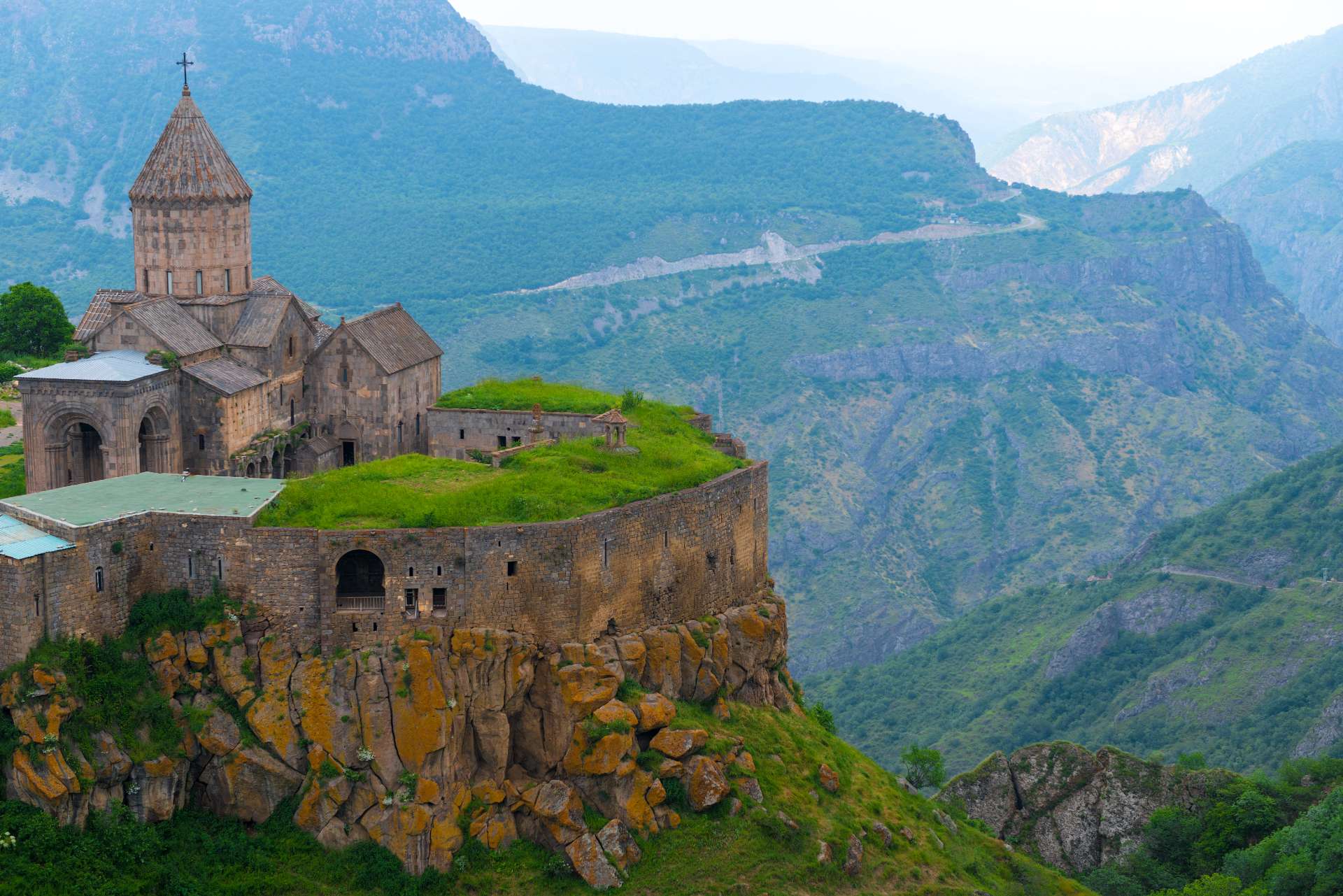 The incredible Tatev Monastery in Armenia in the Caucasus Mountains. (Credit: kosmos111-iStock) 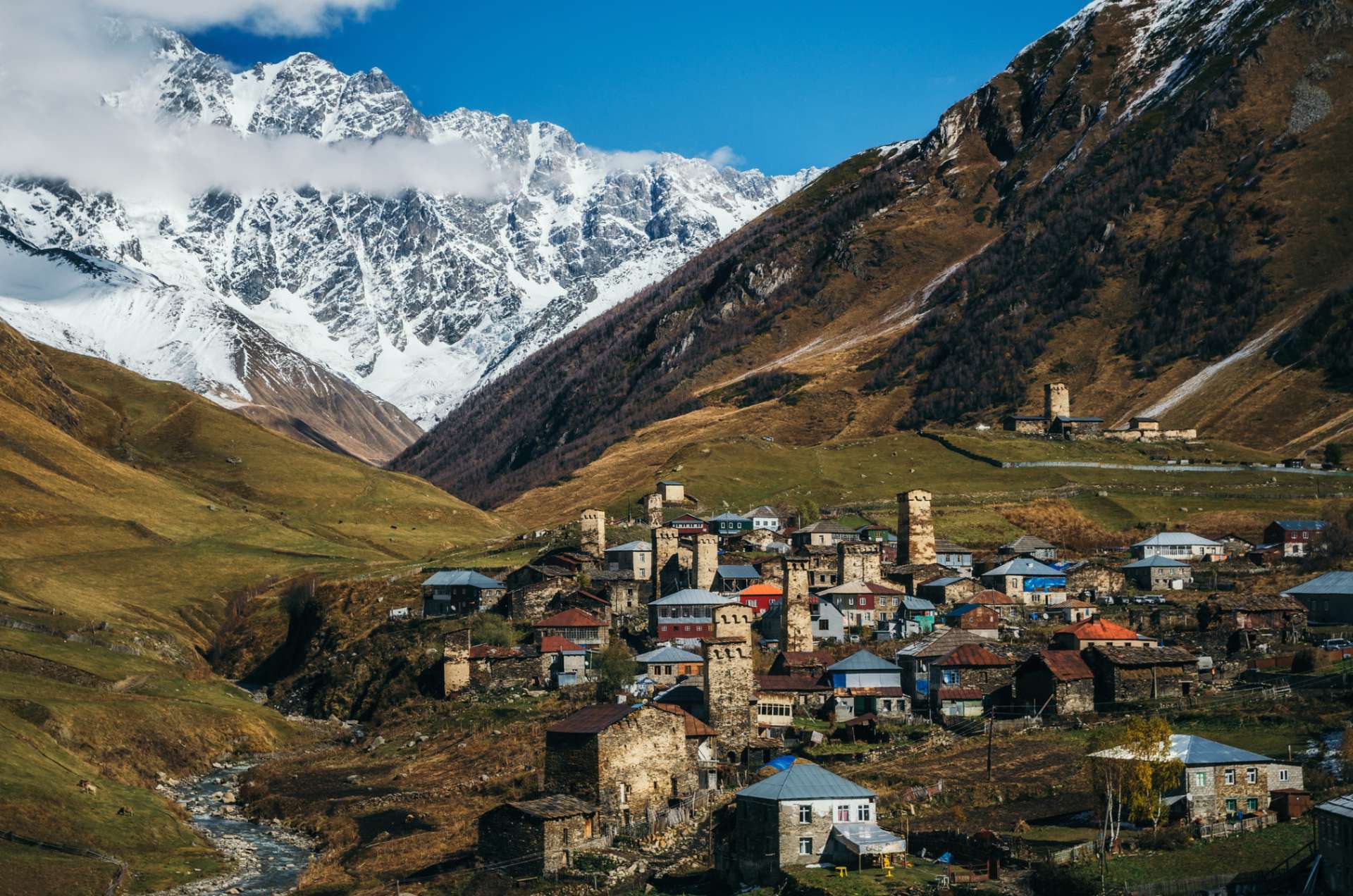 “United by a shared vision of a long-distance trail network across the region, a growing community of local and international hikers, cartographers and conservationists, is putting this hidden gem on the map” for travellers and trekkers, is how the Transcaucasian Trail Association (TCTA) describes it. And by gem, the TCTA is referring to the spectacular history, biodiversity and geography of the region that houses the Greater and Lesser Caucasus Mountain ranges.

It’s not just hiking through rolling hills, verdant valleys, deep forests and high-alpine meadows, over mountain passes and along rivers—or just being in the foothills of the two great ranges—you’ll also pass through remote and historic highland villages and see stunning medieval tower-houses (UNESCO World Heritage sites), which tell a whole a story about what life was once like here. (The many-centuries-old stone structures were both homes and lookouts for locals anticipating invaders—and invading and conquering happened a lot here, and may, with Putin in power, happen again).

On the trail in Armenia. (Credit: ©Tom Allen/Transcaucasian Trail Association)

The region was once vital to the famed Silk Road that saw traders and caravanners make their way from and to Asia and Europe, and there’s a certain romance to trekking in a place or possibly along track that so many purposeful people walked so long ago. “The Armenia route is part ancient trails, part newly built trails, part Soviet jeep tracks, and part open terrain,” the TCTA describes on its site, adding it will also include “historic routes between villages” as well as new trails connecting historic ones.

You can absolutely do the Transcaucasian Trail as an independent hiker—the TCTA has produced trail guides, maps that are interactive, and GPS data you can download, so you can plan and navigate its sections solo or with your own self-guided group.

According to the TCTA, routes are open for multiday trekking adventures in Upper Svaneti-Racha in Georgia, from Sheki to Zagatala districts in Azerbaijan, and in Dilijan National Park, the Gegham Mountains, Vayots Dzor province, and Syunik province in Armenia. Yet more sections are now under construction, and more track being mapped, which may be open and accessible to the public over the coming year, and beyond.

Having said that, this can be serious, rugged terrain (“Hikers in the Caucasus should be prepared for difficult route-finding and challenging trail conditions,” the TCTA advises on its site) — so experiencing it via organized group or tour is also a good option. Luckily, some tour operators are now offering their version of a Transcaucasian Trek for next year and beyond.

“At the end of 2019, the Transcaucasian Trail was seen as the next big thing in trekking, and it should be,” Carol Mongrain of World Expeditions told Outpost. World events may have stopped travel cold in early 2020—but hopefully, in 2022, it’ll rev up again. So, subject to global circumstances evolving or just spinning out again, World Expeditions is now offering its Transcaucasian Trail trips.

Apart from just hiking amongst all that highland and Caucasus’s foothills, highlights include Tbilisi, Yerevan, Kutaisi, Mtskheta, the sixth-century Jvari Monastery and 11th-century Svetitskhoveli Cathedral, the region of Svaneti, the village of Ushguli, Dilijan, Lake Sevan, peaks and passes and yet more ancient monasteries—but really, so much more.

Another option is to do a trek with the Transcaucasian Trail Association (TCTA) directly — it runs what it calls TCT Supporters’ Treks every summer, whereby you join a small-group excursion that’s guided by team members who actually built the trails, Meagan Neal of the TCTA told Outpost, adding that all proceeds from these trips go “to support trail development and maintenance.”

New and untrampled track, peaks as your signposts, alpine air, history to see firsthand, locals who welcome you—what more could you want on any adventure? For more information on the trail, and how to join a TCT-guided trek or to do it independently, check out the Transcaucasian Trail Association (TCTA) at transcaucasian.org. ♦

The Outpost Guide to Travel and Adventure in Taiwan