Often ridiculed and misunderstood, sumo wrestling is not only highly competitive and respected in Japan, it’s a sport that dates back about 1,500 years.

Story and Photos by Gilad Fiskus

At precisely 6:30 in the morning, I arrived at our meeting point at one of Tokyo’s main train stations. Five tourists and the local guide were already waiting for me, and though I arrived on time they looked at me as though I was late to an important meeting.

After listening to the Japanese guide’s final briefing, we set out to an alley that was home to the training grounds and residences of sumo wrestlers—traditionally called “training stables.”

“During the training, you cannot talk, you mustn’t shuffle around, you cannot stand up,” our guide informed us. “[And] you cannot use a camera flash.”

The restrictions went on and on—the briefing may’ve been conducted quietly and politely, but it was clear who was in charge. I felt like a rebellious child, being told not to cause trouble. But I liked it! Finally, I got to experience something authentic and unique in Japan, without the hassle of endless queues and hundreds of noisy tourists.

Watching sumos train in their stables is not a typical tourist attraction—the wrestlers are not exactly entertainers, but hardworking athletes who undergo exhausting training on a daily basis. Our group obeyed the orders like obedient soldiers, then began a 10-minute walk to the stables. 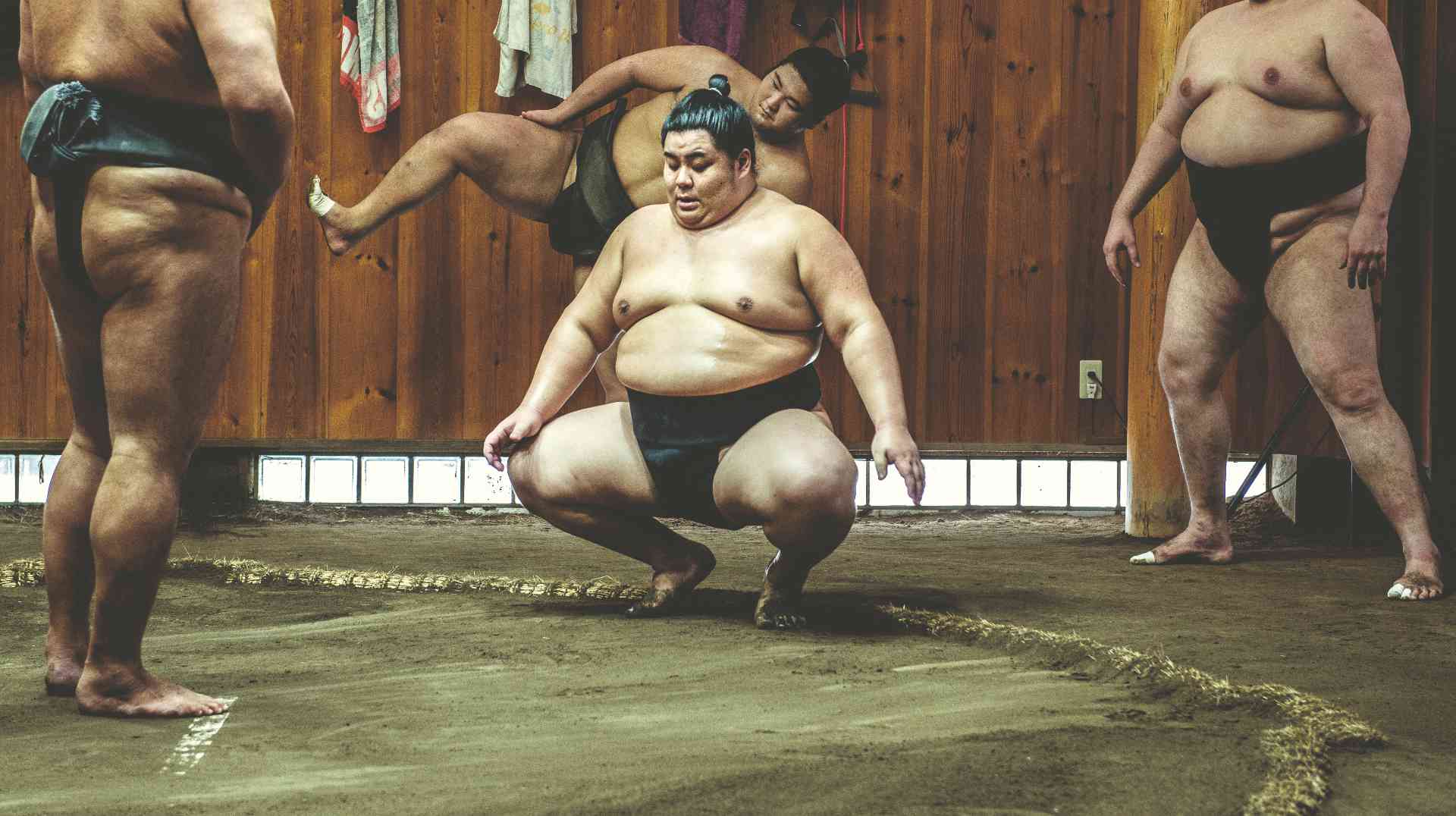 We arrived at a nondescript building that looked like any other structure in the neighbourhood, where we were led inside to a cramped reception room. After being briefed once more about the prohibitions while there, and once our host was satisfied we understood the importance of honouring the place and the wrestlers, we were allowed to enter the training hall.

Training hadn’t started yet, but several wrestlers were already stretching in strange ways on the ground. Watching them, I was in awe of how incredibly flexible they were against their enormous weight.

Closest to the arena were six spectators who were sitting cross-legged on the floor. I settled for the next best seat behind them, and very slowly took out my camera. Careful not to make any noise, I looked for the right angle that would be comfortable and non-intrusive for the next two hours.

Sumo is a competitive sport in which the wrestler, or rishiki, tries to push his opponent out of the arena ring, or force him to the ground. Sumo originated in Japan, and it is still, to this day, the only country running professional competitions in the sport. Many old sumo traditions are maintained, and even now the sport features odd rituals such as throwing salt in the air for purification. Sumo is considered a Japanese martial art, but in addition to being a test of power in the arena, it’s also related to traditional Shinto rituals. (Shinto is an ancient Japanese religion.) 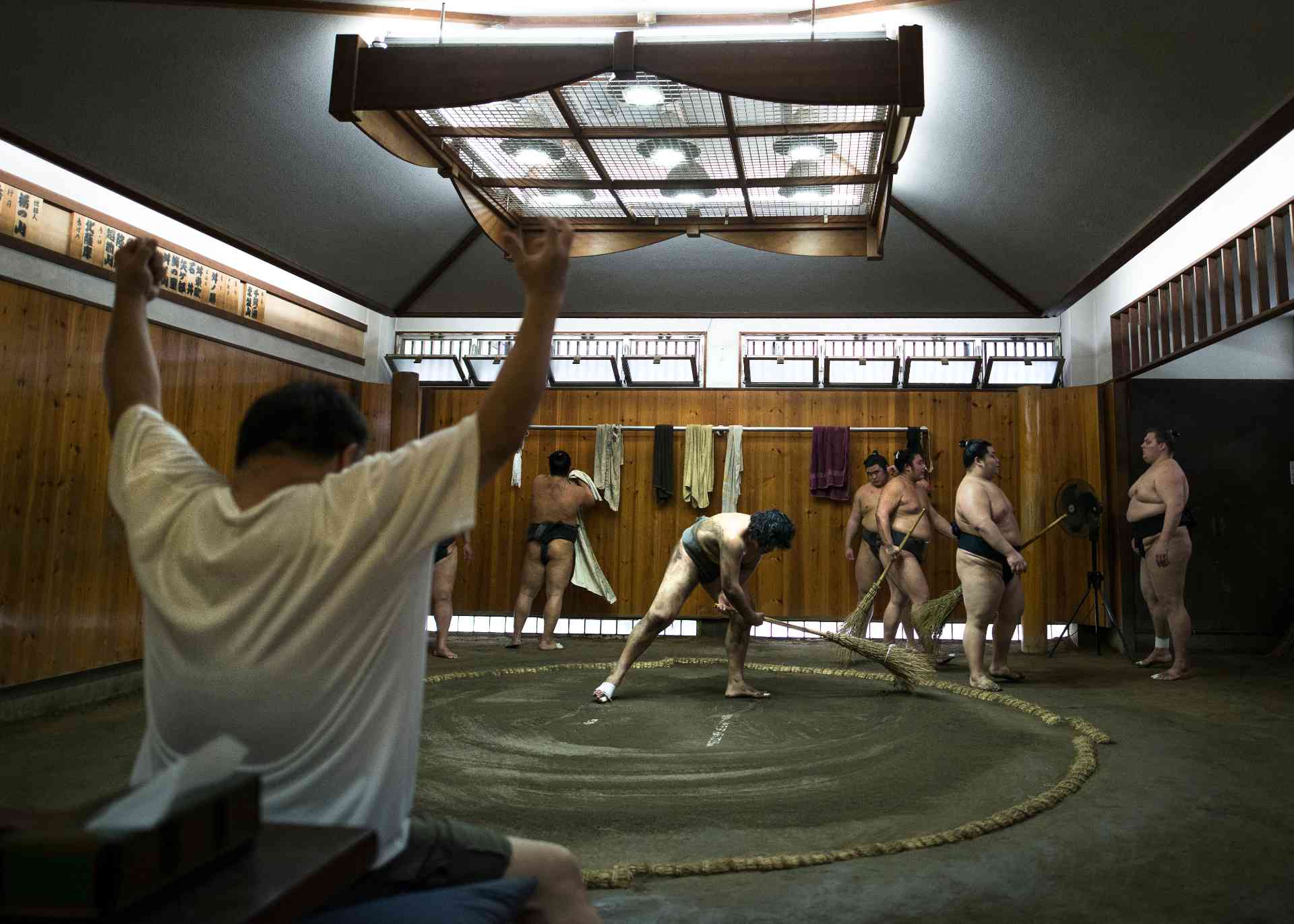 The objective is to stay inside the ring.

A sumo fight begins when both wrestlers place their hands on the ground simultaneously. This leads to preliminary moves where each sumo tries to distract his opponent. (They pretend to put their hands on the ground but immediately rise up.) Once this lengthy introduction comes to an end the fight begins, and it rarely lasts more than a few seconds. Sometimes, a fight can extend for several minutes without a win. In this case, the referee calls a mizu-iri—a drink break.

The fight ends when one of the wrestlers is forced out of the ring, or when any part of his body (except the soles of his feet) touches the ground. Sumo wrestlers wear a loincloth called a mawashi that only covers their waist and groin area.

Veteran and highly-ranked fighters wear a white silken mawashi during competitions. In training, the standard mawashi is black and made of cotton. This belt helps provide the rival with a gripping point during the fight, and is thus often loosely tied.

In rare cases, a sumo may find himself stark naked in the middle of the battle. In the past this didn’t really matter, but since the Japanese adopted a European approach toward nudity, it can result in immediate disqualification of the fighter—something that occurred during a prestigious tournament in May 2000, when the wrestler, Asanokiri, lost to his rival, Chiyohakuho.

Sumo wrestlers are famous for their enormous body mass, often a winning factor during a fight. Unlike boxing, there are no weight categories and only one round of fighting. The current oversized appearance of sumo wrestlers only emerged in the 20th century. (When the sport was inaugurated approximately 1,500 years ago, sumo wrestlers looked like regular, muscular, healthy samurai fighters.)

The dominant traits of sumo wrestlers include flexibility, speed, balance, power and endurance. During training, special emphasis is put on each of these qualities for improvement. 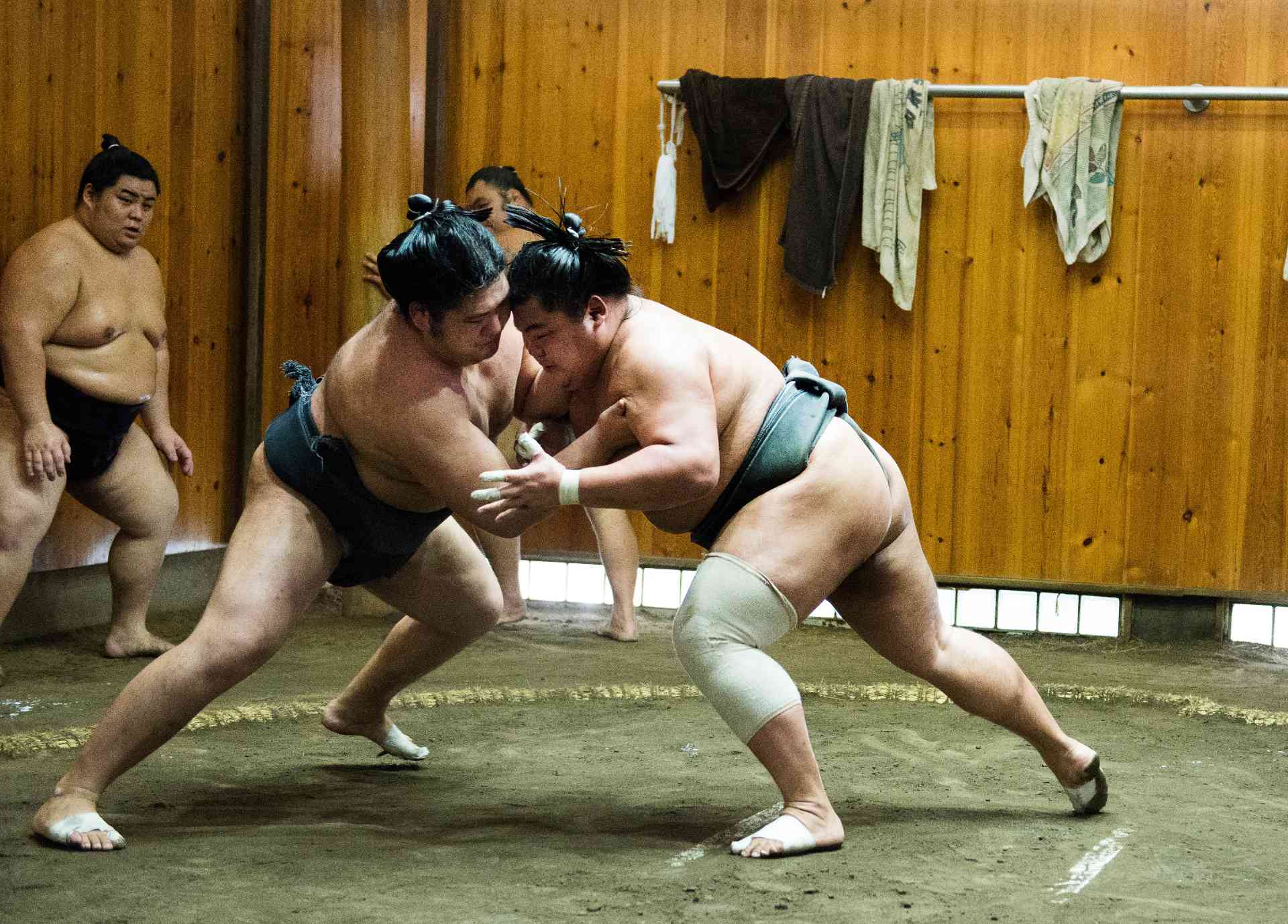 Wrestlers are competitive, but follow a code of conduct, and always cheer each other on.

The training finally kicked off with the arrival of a coach, who was a renowned but retired wrestler. Over the next few hours of the session, the wrestlers displayed a high level of seriousness, commitment and respect to the coach and his directions. Despite their heavy weight, wrestlers must maintain strength and flexibility.

Each training session typically begins with a suite of special stretches that are repeated dozens of times. This involves a traditional technique called matawari, which requires the wrestler to sit on the floor with his legs spread out as far as he is capable of doing.

With his knees locked, the wrestler leans forward and places his entire chest on the ground while stretching his lower body, holding the position for several minutes.

Another technique, shiko, is used to strengthen the legs and feet. This involves the wrestler standing up with his legs spread wide apart while placing his hands on his knees or waist. With one leg locked on the ground, he lifts his other leg in the air and returns it to the ground with great force.

He repeats the exercise with his other foot, stomping loudly. Other than the occasional sighs and groans from the effort, and the sounds of their bodies hitting the ground, only the coach’s commands were heard. The sumos respond with a “hi,” meaning “received” and “understood.”

After a long warm up, the trainees proceeded to one-on-one fights. Once again, an upmost seriousness was displayed, and the wrestlers who weren’t participating in the fight stood silently around the arena, watching and studying the fighters’ every move. Two hours passed quickly, and the strain on my back was truly starting to kick in. Watching it all go down in the arena was a thoroughly powerful and satisfying experience, to say the least.

Every sumo wrestler is a member of a stable—this is where they live during their first years of training. A stable is run by a boss and ex-wrestler called an oyakata, who provides sufficient support behind the scenes, typically with his wife. There are up to 50 of these oyakatas in Japan, and almost all of them are based in the capital, Tokyo.

The life of a sumo wrestler is highly disciplined, and is spent in a hierarchical environment.  Japan’s sumo association rules determine codes that are expected from its members. For example, the association bans its members from driving a vehicle because of their heavy weight. Any disobedience is taken very seriously and can lead to the suspension of the violator as well as sanctions against his stables. 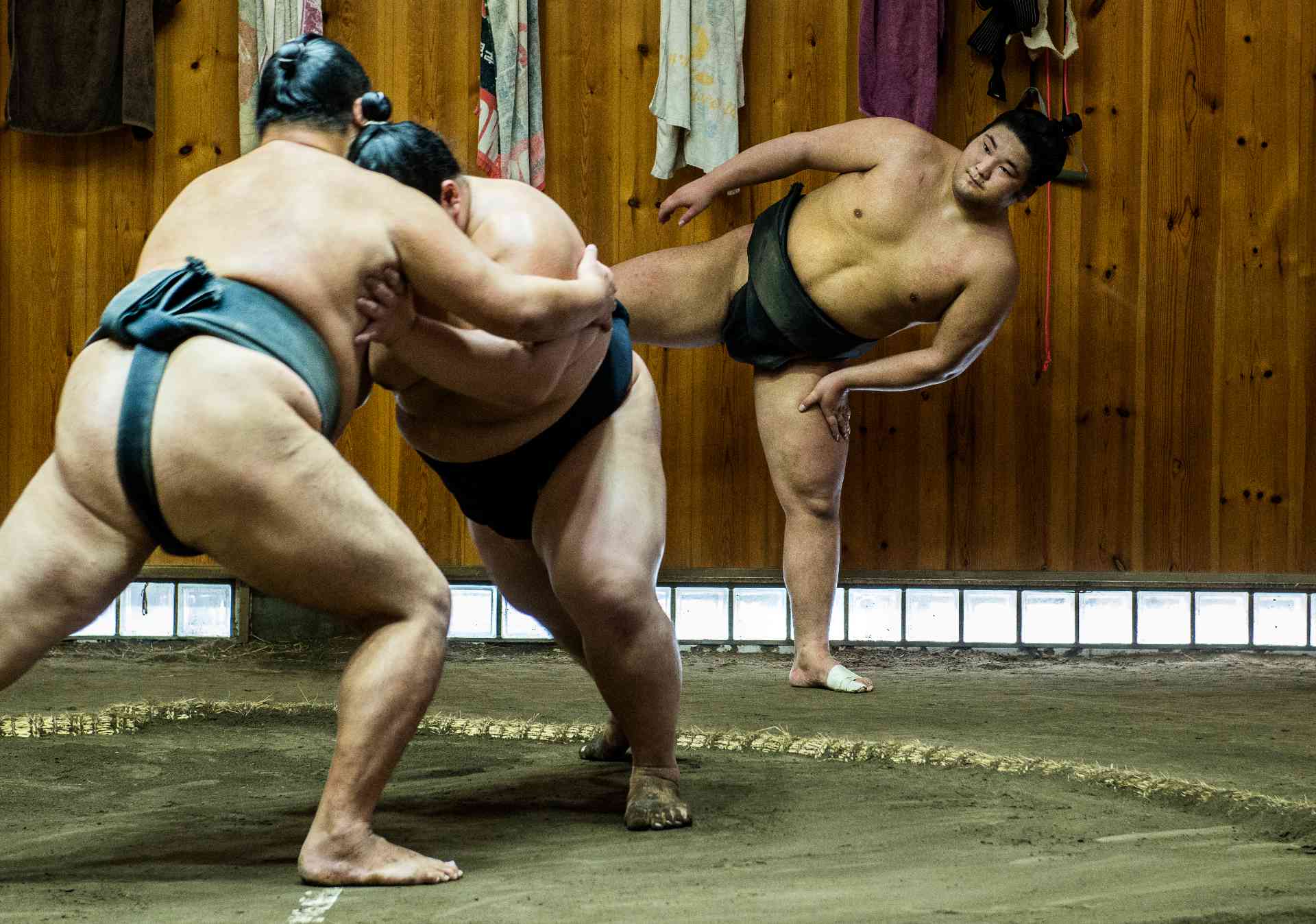 Sumo wrestlers are expected to let their hair grow and have it tied up on top of their heads.

When they enter the world of sumo, the would-be fighters are expected to let their hair grow and have it tied up on top of their heads—this style is called chonmage, and is similar to what samurais did in ancient times. The dress code is just as precise, with each wrestler being given a special dress to match his ranking. The sumo is required to wear this outfit not only in the stables, but also in public.

The jonokuchi, who are the youngest and lowest-ranked sumos, are the first to rise at five in the morning for training. The higher-ranked sekitori can get up at seven, and while they do their morning training the juniors do the housework, clean and prepare the showers, and basically tend to every need of the seniors.

Meals have a special significance in the life of a sumo wrestler, and also are prepared by the youngest members of the stable. The preferred meal for weight increase takes the form of a fatty fried dish called chankonabe, which is also called sumo stew, digested with large amounts of beer.

Sumo wrestlers eat two meals a day. The first one is a brunch served at 11 a.m., while the second is at 6 p.m. The morning training of the senior sekitori ends half an hour before the first meal, and everyone then heads to the showers—the seniors go first and are served and handed towels by the juniors. The hierarchical relationship between all sumo ranks is maintained at all times and all costs: thus, the world of sumo wrestling is generally divided between young people with lower rank (the servers) and senior wrestlers.

Sumo wrestlers may be fine during the height of their careers, but negative effects on their health start to appear later in life, with medical complications of diabetes, high blood pressure and liver issues, among others. Despite this, wrestlers are highly admired and celebrated in Japanese culture. The life of a sumo may be fragile and dangerous, but this hasn’t stopped the sport from attracting many Japanese (and some foreign) young people who willingly want to dedicate their life to this ancient practice. ♦

Dr. Gilad Fiskus is not a sumo wrestler—he’s a Canadian-born dentist who lives in Israel but loves to travel and photograph the world. His photos have been in more than 100 exhibits around the world and you can see more at www.fiskus-photos.com.

Punctuality is a serious thing in Japanese culture. I am not surprised they look at you like that.

I’ve always loved sumo wrestling, admired how such massive guys could throw themselves around like that.

How did you manage with the camera though?