I still had a couple days left in dreamy Acapulco, a land that seemed forgotten since the golden age of Hollywood, when traipsing a few hours south of the border gave movie stars anonymity, creating a playground for the rich and famous in this romantic little region of Mexico. I’d like to think the lull of Acapulco’s carefree ambiance caused a temporary lapse in judgment, but the truth is that I didn’t forget anything. I blatantly ignored the warnings.

I had just woken in a puddle of confusion even larger than the puddle of sweat underneath me. It was late summer in the southern coastal city, so high temps were the norm by day—but it was early morning, and despite the air conditioning blasting all night, I didn’t feel warm at all.

I couldn’t rationalize the volume of sweat beneath me, but I was quickly distracted by a more pressing concern: my face felt like it had turned into plastic. I’d never noticed how my face felt before, but there was no denying a dramatic change, as if only half my skin remained, stretched taut to compensate for the missing half. To the touch, it was less plastic and more leather—rougher than expected. I felt some clumps of crumbs on my forehead and cheek and, when I tried to wipe them away, they refused to fall. They seemed to be part of my mysterious new face.

The bathroom mirror clarified things for me.

What I thought were crumbs turned out to be a series of miniature volcanoes, but not like the irritating acne of my teenage years. Around them were tiny craters where the creepy formations had pulled the surrounding skin together to create their peaks, leaving valleys in their wake, and they had already spewed a yellow lava that was now solidified atop and around them. I was minorly disgusted and majorly concerned.

It didn’t take long for the Internet to inform me I had sun poisoning.

Acapulqueños had been warning me to wear sunscreen since the minute I arrived. “It’s different here,” they all said. “The sun is stronger.” This and all the other warnings I’d rejected ticked through my mind as I tried to rationalize my misstep. I’d spent plenty of my childhood in the sun, I figured; I’d been to deserts and beaches all over, even worked a few jobs outdoors in the summer, and I never had anything beyond a sunburn that turned to a tan the next day. So I didn’t listen. 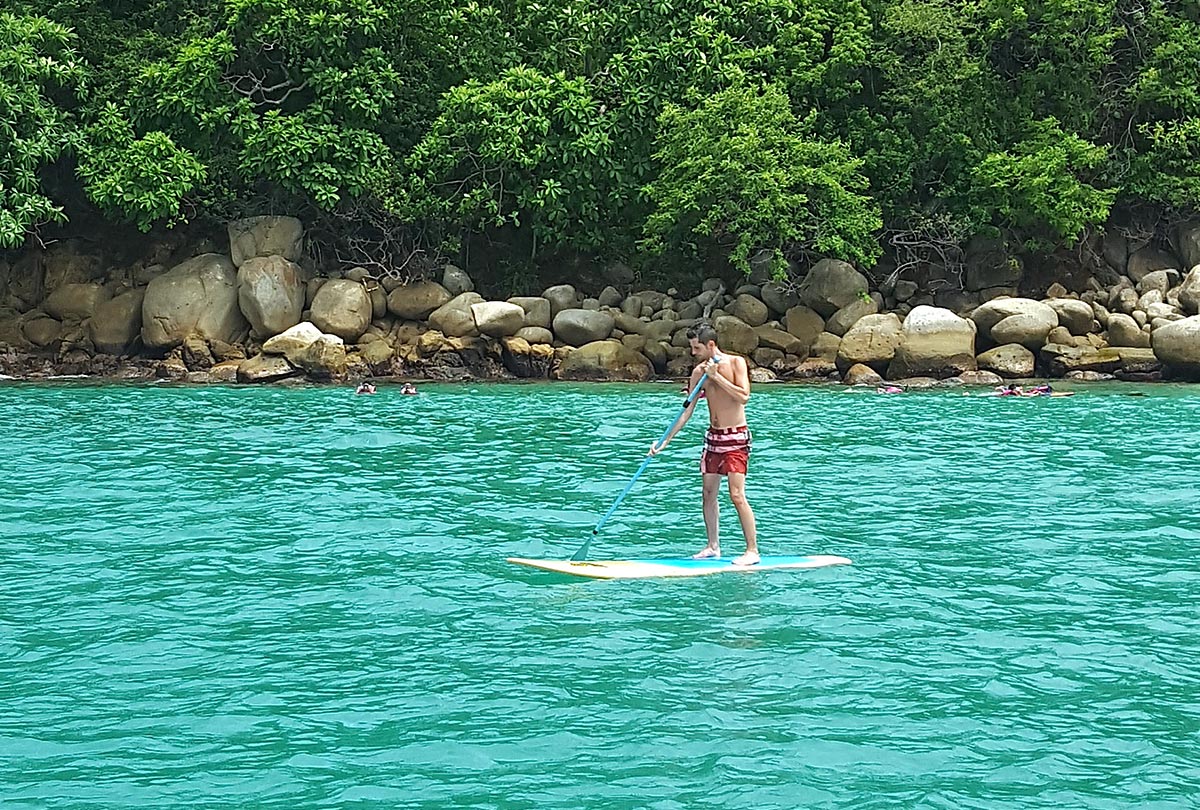 Brandon SUPed around Acapulco, shirtless and without sunblock. Don’t be like Brandon. (Photo: Brandon Schultz)

I spent a few minutes wondering whether the sun really could be stronger here, whether I was just getting older, and whether I had just invited skin cancer into my future. I paused this avalanche of increasingly dramatic thoughts and realized that, though it hurt and was a new experience for me, this was basically a bad sunburn that needed to be quickly treated.

But I didn’t know how. I’d had plenty of warnings to prevent sun damage, but no notes on what to do if I failed.

I put on a baseball cap (another new experience), ate breakfast and shared my sob story with Delfina, my host and new friend in Acapulco. Delfina didn’t make much fuss, but she sent me to the grocery store to get aloe with a coworker of hers. I wasn’t sure why I needed a guide to grab some aloe, but I wasn’t about to shirk anymore advice on this trip.

The grocery store was nothing out of the ordinary, and I headed for the pharmacy aisle, but my Grocery Guide, whose name I never learned, steered me toward the back of the store to a locked glass case that might typically hold something outrageously illicit or valuable. This particular case contained—among other ointments, balms and pills—large clear bottles of green aloe. She left me for a moment and returned with an employee who unlocked the case and showed me a huge bottle of aloe, rotating and displaying it as though I should be inspecting the label of a pinot grigio.

“I’m only here for a couple days more and I can’t take it back on the plane with me,” I said to my Grocery Guide, embarrassed to be shown such a massive bottle of goop.

“You’ll use it,” she insisted, and then informed the employee that I’d take it.

When I reached for the precious product, my guide shook her head, locked the case, and marched toward the checkout. I hurried after her, catching up just as she reached a checkout lane, and paid a surprisingly steep price before we left to return to Delfina.

It turned out aloe was in high demand in Acapulco, and it was stolen often. I couldn’t really believe that aloe, of all the things, was that coveted anywhere, but Delfina just smiled and reminded me, “The sun is stronger here.”

Maybe yes, maybe no—it doesn’t matter. I should have listened from the start and not reached this point of needing to wonder, but I had been too arrogant in my own history. Just because something was, doesn’t mean it is, and there are certainly no guarantees of what will be. Luckily, this was “just” sun poisoning, and it did pass without too much pain thanks to generous applications of aloe, which I, too, came to regard as liquid gold as it relieved the burns and tingling. The volcanoes eventually receded, releasing my overstretched skin and leaving no marks behind. But my refusal to listen to local caution could have led to something much worse—something that could have ruined the rest of my trip, or jeopardized my health more severely.

As I packed my bag early on my last morning in paradise and watched the sun splash across the sleepy mountains across the dreamscape of Acapulco Bay, still twinkling with lights from parties the night before, it dawned on me that whether the sun, or anything else, didn’t behave the same from one place to another, the lesson was universal: dive in, listen to locals, leave arrogance behind, and always wear sunscreen.

What Can the Canadian Government Do for Travellers in Emergencies?

I’m sorry you got sun poisoning, but really great article. And column! I guess we should always listen to the locals when traveling.