What’s it like to compete in a 700-km race with a scrappy stray in tow? Totally charming, says Swedish adventurer Mikael Lindnord, in his book Arthur: The Dog Who Crossed the Jungle to Find a Home. In this excerpt for Outpost, Lindnord gets caught off guard when Arthur jumps ship and disappears into the murky Amazon River.

Arthur was wet and cold, and felt very heavy. He was also so exhausted he was almost inert in my arms. I just about managed to pull him on to my lap and then get him into the boat in front of me and onto the bit of mattress as the kayak swayed wildly from side to side.

It was all the more difficult in the pitch dark; our headlamps only lit half the scene. But I was glad of the dark because that way no one could see the tears pouring down my face.

There was a knot in my stomach as I saw how Arthur collapsed in front of me, tongue hanging out, now panting heavily. I could hear one or two people on the bank crying.

Why are they crying? I wondered to myself, as the tears continued to run down my cheeks.

Arthur looked round at me, still panting. Now he was so close, I could clearly see in the light of my headlamp, how bad his wounds were. It was odd to feel his wet fur against my legs and I tried not to think about things like fleas and disease.

Mikael named him “Arthur.” Eventually, he made it to Sweden.

But then I told myself that I mustn’t think like that. I had made this decision; I could not be afraid of him, or anything to do with him, even if he did have fleas and diseases. I had to make him feel welcome, make him feel I trusted him, so that he could trust me.

Arthur seemed to want to turn round and face me, but there wasn’t room in the boat.

“Stay still, Arthur,” I said. “There you go, just sit still.” We had been drifting for a bit now, and the murmurs of the crowd were receding into the distance.

“OK now?” said Simon as he turned to look at his unusual cargo.

“Let’s move on,” I said. It was starting to get cold, and it would warm us up to get going after the others. I could see Staffan and Karen up ahead looking back. I couldn’t see the expressions on their faces, but imagined Karen looking resigned and Staffan wishing he were back with us in the middle of the action.

Simon and I lifted up our paddles again and started to try to get back into some kind of rhythm. But it only took two strokes for me to realize that my technique was never going to work with thirty kilograms of wriggling wet dog between my legs. No part of the paddling motion worked when you had Arthur to accommodate.

I struggled to make the strokes work by half lying on my back, but everything was made twice as hard by the presence of our extra passenger. Yet I found I rather liked the fact that it was all so difficult; it took my mind off worrying about the enormity of what I had done.

Perhaps, I found myself thinking, this is just how it will be from now on. I will try to paddle along as before, but now I must accommodate a new presence. I would have to learn how to paddle differently if Arthur were in my life.

Soon I had started to perfect a different technique, and we were making slightly better progress. The tide was helping us, but we were still struggling to keep up with the others. Arthur had settled down a bit and was now quite still. I wondered how long that would last.

After another hour or so, I saw Karen and Staffan’s boat slow down.

“How you doing?” called out Staffan. “How’s Arthur? We should swap, shouldn’t we?”

It was true, Simon had done more than his share of struggling with the extra weight. “We’ll swap at that bit of mangrove,” I said as our boat slowed behind them. “Maybe in the next hour.”

We pushed on, but paddling had got difficult again. Arthur was now obviously restless, and seemed to have recovered a bit from his exertions. He stood up and started looking over the side of the boat, watching the flying fish jump out of the water; he was moving from side to side and sniffing me and Simon and every bit of boat he could reach. Then he started to climb up on the side of the boat, and suddenly there was a splash and he had gone.

“What happened?” said Simon from in front.

“I don’t know,” I said. “He’s just gone.” Then I could see him swimming alongside the boat. “He must have seen something worth chasing in the water.”

I looked down at him again. Arthur was slowing now; he was panting heavily and his head was back down deep in the water. He was starting to whimper a little bit, and I realized that he’d made a mistake. He’d chased after something in the water and hadn’t thought through what would happen next. I guess if you’re a dog you don’t necessarily think of cause and effect in quite the same way as we do.

We slowed the boat again and I leaned over into the water and lifted a cold and wet Arthur back up into the boat again. The sheet of plastic over my legs was coming into its own and protecting me from some of the wet and muck that came into the boat with Arthur.

This time he sat quietly in front of me, but he was now shivering. As it was now the middle of the night the temperature had dropped considerably, and we were all getting colder.

“OK here,” I said as we got near a mangrove island. “We can stop here and change.” I thought we might all warm up and speed up if two of us changed places.

We pushed the boats up on to the shore. Arthur was looking extra alert at this sudden change of scene, but this time stayed firmly in the boat. Simon went over to Karen’s boat, and together they pushed off and started paddling again.

Staffan came over to the front of my boat and we set off behind the others. He immediately started paddling strongly, and we began to make good time compared to the others.

Arthur lay down again once he’d seen what was going on. But he was still shivering uncontrollably. I had two jackets in my pack—a wind jacket and a Gore-Tex jacket. I dragged them both out of my backpack and put on the wind jacket. Then I laid the Gore-Tex over Arthur, even putting its hood over his head. It didn’t fit him exactly, but at least it meant he would have some slightly warmer air round him.

It seemed to do the trick, as he gave a few extra wriggles and then lay still for a bit. Excellent, I thought, he’s asleep. Now we can make some progress. We paddled on hard and fast for another two or three hours.

Mikael and Arthur making time for each other!

After we’d been going for nearly eight hours, the tide had almost gone out, and navigating the sandbanks it revealed was getting exhausting. It was time for a refuelling stop. There were posts in the river coming up that we could tie ourselves to while we stopped to eat and get a little rest.

It’s usually an awkward business anyway, eating and sleeping on a small kayak. But when you’re starting to get very tired, and you have a dog on board, it becomes even more so. Staffan and I ate some energy bars and gave a couple of meat sticks to Arthur. We settled down to lie back and try to get some rest. It’s difficult enough to sleep in a boat, because you keep losing your balance. But our boat was much more unbalanced than most.

After fifteen minutes or so of trying to sleep, I gave up. Arthur had got all restless again, had wriggled out of his jacket and had somehow maneuvered himself to the front of the boat. He sat there, all alert and pointing forwards like the captain of the ship or a still from the film Titanic.

“Come on then,” I said to the others. “Let’s keep going. Don’t stop—let’s just do this and get to the finish.”

So we set off again, this time with Arthur at the front of the boat, still looking out to the front, as we got back into our paddling routine. We were making good progress as we approached some rocks on the right-hand side of the river. They led up to a village—we could see there were houses further up the bank from the river—and it looked as if there were people fishing from some of the rocks.

As we got nearer our captain at the front of the boat got restless again. He had his paws on the front of the kayak and was looking over at the rocks. Almost before it happened I knew what he was going to do.

And yes, as we passed the rocks, with a jump and a splash Arthur was in the water again, and was soon out and trotting up the rocks towards the village. It was starting to get light now, so I could see him as he got nearer to some of the houses. Then he disappeared behind a wall.

I didn’t know what to think. Half of me wanted to think he’d just spotted something he wanted to investigate; the other thought that maybe this was it. Maybe it’s over. I looked down at the plastic sheet, the mattress on the bottom of the boat and my filthy jacket. I watched the water that Arthur had brought with him into the boat slosh around as we paddled forwards. And I tried to empty my mind of all thoughts and concentrate on paddling hard.

After about another minute I allowed myself to look back at the bank. No sign of Arthur.

We paddled on silently for another few minutes. I concentrated hard on getting my stroke absolutely in sync with Staffan, and made myself feel pleased by the progress we were making. We were nearly at the end of the rocks that led up to the village by now, so I let myself look up and back towards the bank again.

And there, trotting through the stones that led to the water, was Arthur. As we got nearer he sped up, heading over in our direction.

I found myself grinning like a mad idiot, as we guided the boat gently into the shallow waters. Arthur was now bouncing between the rocks on the shore and moments later was just under the prow of the boat, ready to jump in.

Staffan gave him a helping hand and he pushed past to the middle of the boat and lay down on his mattress as if nothing had happened. I had to put my paddle down to give him a hug. Wet and filthy though he was, he had to know I was glad he was back. ** 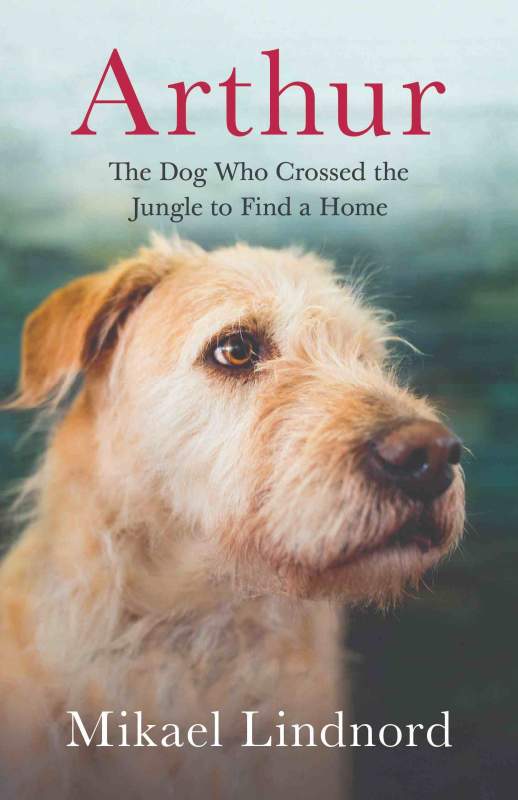 Excerpted from Arthur: The Dog Who Crossed the Jungle to Find a Home by Mikael Lindnord. From Greystone Books, reproduced with permission.