Berlin’s Tegel Airport is old, creaky, and awfully reviewed. Why do so many Berliners want to keep it open?

Flying into Berlin is like stepping back in time. Both the city’s airports, Tegel and Schönefeld, are outdated—they’re filled with plastic chairs, squeaky baggage carousels and few dining options beyond Burger King.

So it should be welcome news that a new airport is under construction. Berlin Brandenburg Airport is planned to become one of the busiest airports in Europe, serving 34 million passengers annually, and is scheduled to replace the city’s two transit relics in 2019. Early sketches looked beautiful, too, with trees lining the passenger terminal, modern glass walls, straight wide awnings and a CO2-neutral energy station.

But earlier this year, more than 200,000 Berliners signed a petition demanding a referendum to keep open the old, donut-shaped Tegel (pictured above), even after Berlin Brandenburg opens. The issue will be put to a local vote on the same date as the national election, on September 24, 2017.

So why are residents fighting for this small, outdated airport—which suffers a dismal 3/10 rating on the airport-review website Skytrax?

For the Love of Tegel

Tegel Airport has a special place in the hearts and minds of many Berliners. Built during the Berlin Blockade in 1948, when the Soviet Union cut off rail, road and canal access to West Berlin, it was instrumental in delivering supplies to the city during the subsequent airlift. 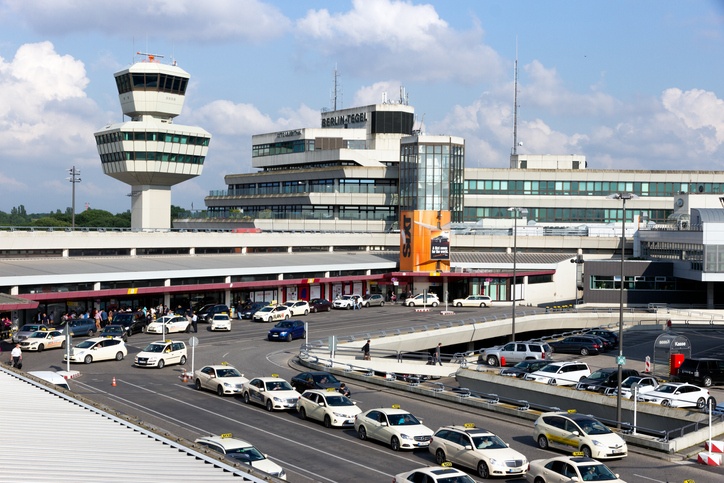 More than 17,000 Berliners, working three consecutive shifts for just over one Deutsche mark per hour and a hot meal, helped build the runway, which was made from the bricks of buildings destroyed during the Second World War. Civilians, mostly women, sorted and loaded the bricks onto trucks, and the 2,428-metre runway—the longest in Europe at the time—was completed in record time of just 90 days.

“Tegel has grown in Berliner’s hearts,” Lars Wagner, a spokesman for the Berlin Airport Authority, told CNN in June 2015, before the referendum was set. “As so often in life, people find it hard to part with what they’re used to.”

By contrast, this new airport, meant to symbolize Berlin’s evolution from a divided city into a leading European capital, is running six years late. After nearly 15 years of planning, construction began in 2006 and was due to finish in 2010. However, due to a series of setbacks, corruption and incompetence, the site is still lying in a state of ongoing construction, 18 kilometres southeast of the city centre.

Not only have the projected construction costs risen from 2 billion euros to more than 6 billion, but the government has been spending 17 million euros a month to maintain the empty terminal building, while missing out on around 13 million a month in rental income. The fiasco has become an international embarrassment.

It’s About More than Just Airports

The ongoing drama of the two airports is symbolic of Berlin, and Germany’s, post-war identity struggle. Berlin clings to its history—that of the war, Tegel and the Wall. But since reunification, Berlin has become the capital of the most economically and politically powerful country in Europe, and having two old airports on opposite ends of the city is no longer befitting.

However, just as the repeated delays and inability to open the modern airport demonstrates, the German people seem reluctant to step into the future.

This is partly because they recognize the importance of remembrance. Germany’s baby boomers, having been raised by a generation that tried to sweep its history under the rug, demanded the country face itself in the country’s formative late 1960s. As Jeremy Cliffe has summarized in The New Statesman this August, “It produced a culture of remembrance and guilt that still dominates the political class.”

Certainly, a sober awareness of the past has helped curb the right-wing populism that has gripped other European countries, such as Hungary and Poland. Memories of the war also account for the country’s low national defence budget and reticence to intervene in international conflicts.

But the past can also be used as a matter of convenience. After all, the reason most Berliners would like to keep Tegel open is that, at just eight kilometres from the city centre, it’s easy to get to. Similarly, Germany has often used the past as an excuse to skirt international duties—the country’s modest defence spending has no doubt aided the country’s post-war economic success.

Looking to the Past for a Solution

The future of the airport, as well as the nation, can perhaps be illustrated by way of one final Berlin airport: Tempelhof.

In 2008, after a similar referendum, Berliners finally conceded to shutting the Tempelhof airport down. However, they were determined to keep the space as it was, rejecting plans to build apartment blocks and the world’s largest artificial mountain in its place.

The huge, flat expanse became an oasis in the middle of the city, where people could barbecue, fly kites and rollerblade along the former runway. But then, in 2015, the hangars had to be repurposed into a mass emergency shelter to accommodate for newcomers from Europe’s refugee crisis. Although the refugees were accepted with open arms in Berlin, which is historically a liberal city with a reputation for welcoming refugees, the change disconcerted many residents. The shelters at Tempelhof are still open for now, though the government is expected to close them down eventually.

Tempelhof illustrates the fact that nothing can remain stuck in time. Cities, nations and narratives evolve, and in the future, Germany and Berlin will likely be forced to play a greater role in global crises. Regardless of whether Tegel remains open, change is inevitable.

Madhvi writes articles and essays as well as children's books, short stories, plays and screenplays. She has been published by The New York Times, Washington Post, Asia Literary Review and others. She grew up in London and now lives a thoroughly bohemian lifestyle in Berlin.

A Journey Back to Macedonia, My Motherland